Adventures of a golden retriever

The golden retriever grand-dog, Georgie was included in the family get-away to eastern Prince Edward Island recently and judging by her behaviour, she thoroughly enjoyed it. Georgie took part in most activities, and when she didn’t she had a front row seat. She added to the vacation experience as only Georgie can do.

The grand-dog loves the water, fresh or salt. Given the chance, she will always get wet. She was off-lead on a few occasions to enjoy the sea and she took full advantage. 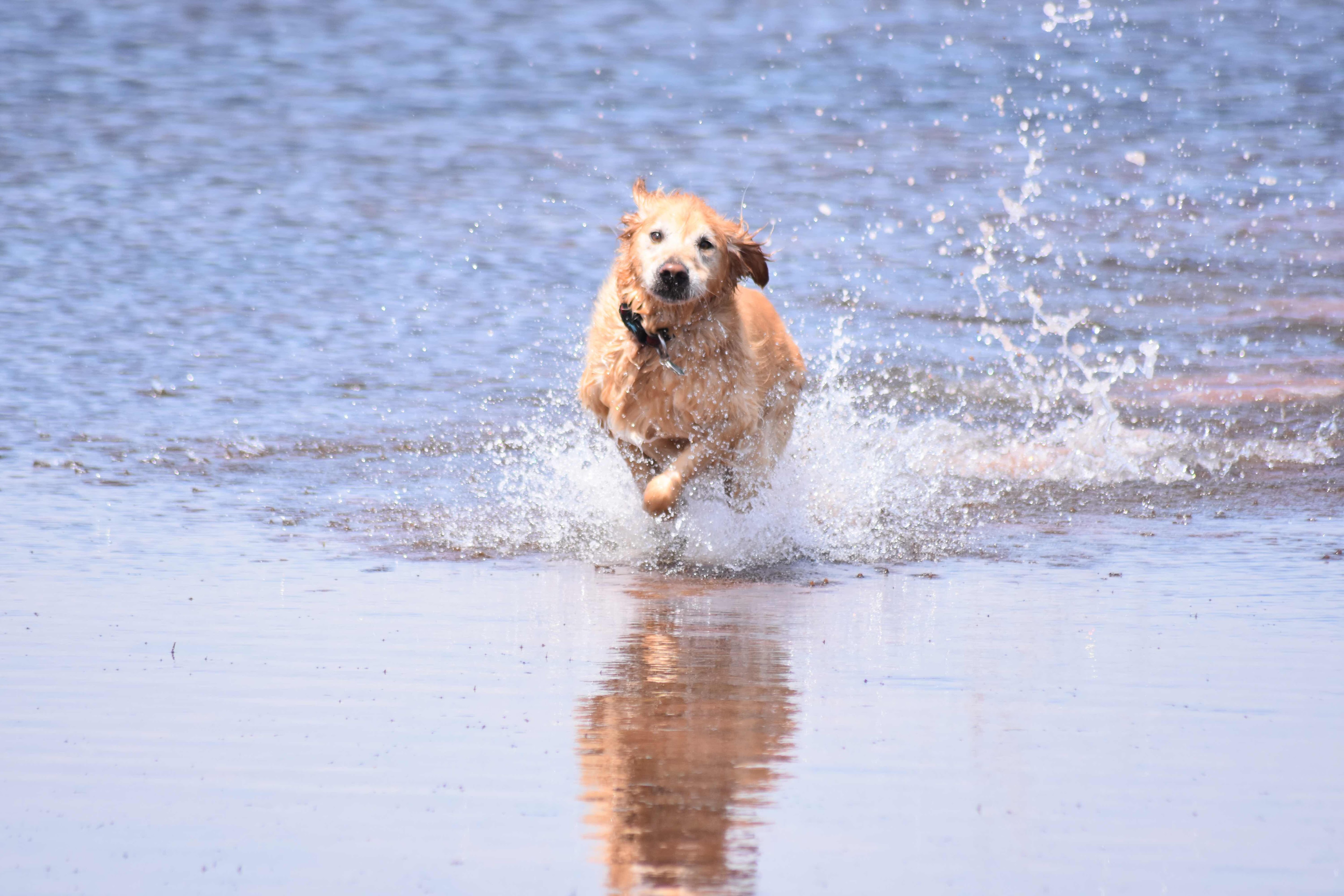 Georgie tried to get in the kayak with our daughter. She would have been a risky passenger though because she’d want to jump in the sea. However, Georgie responded to our calls which is unusual unless you mention a treat. 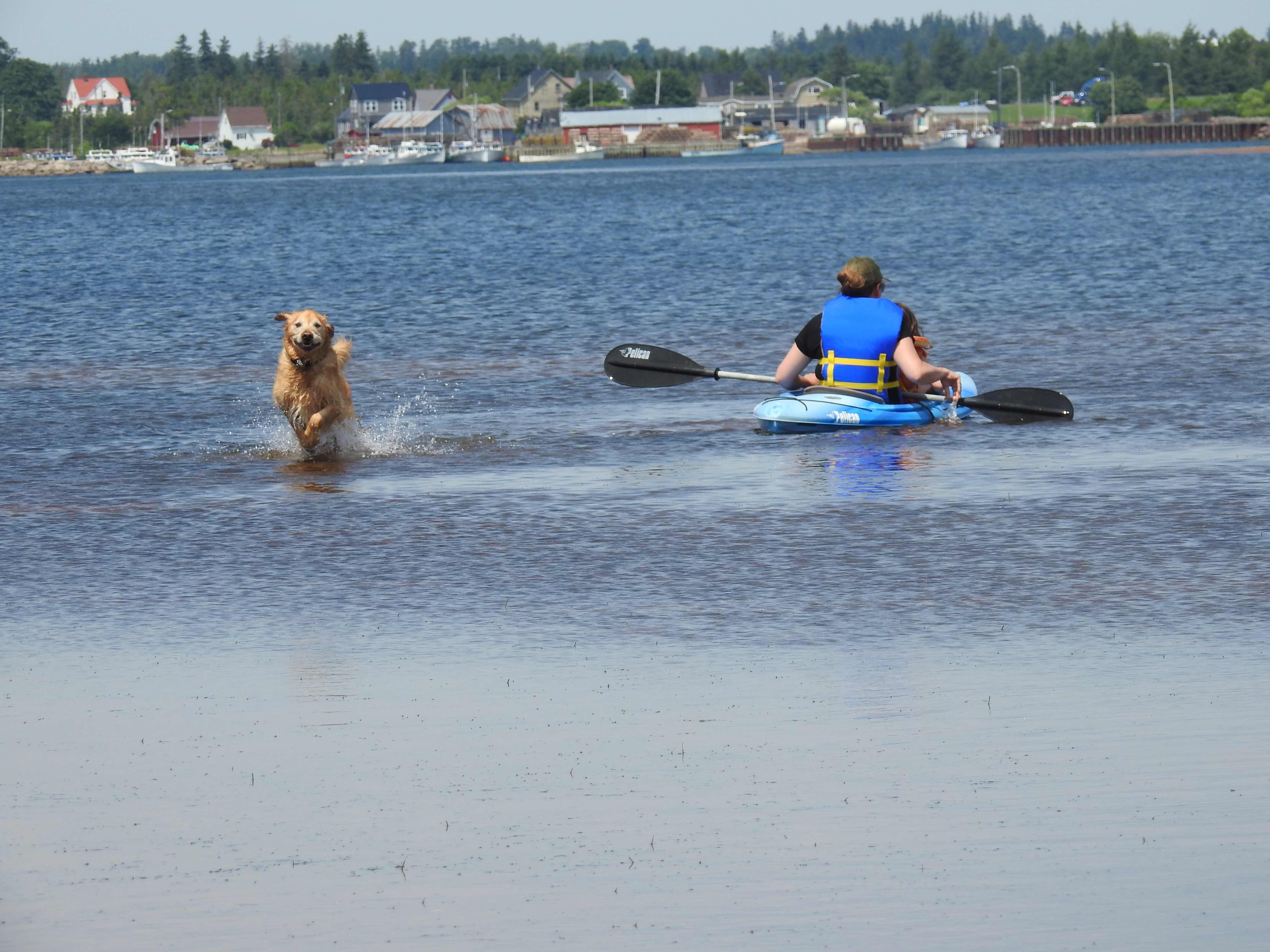 Anytime she was off-lead at the beach, Georgie rolled in the sand. 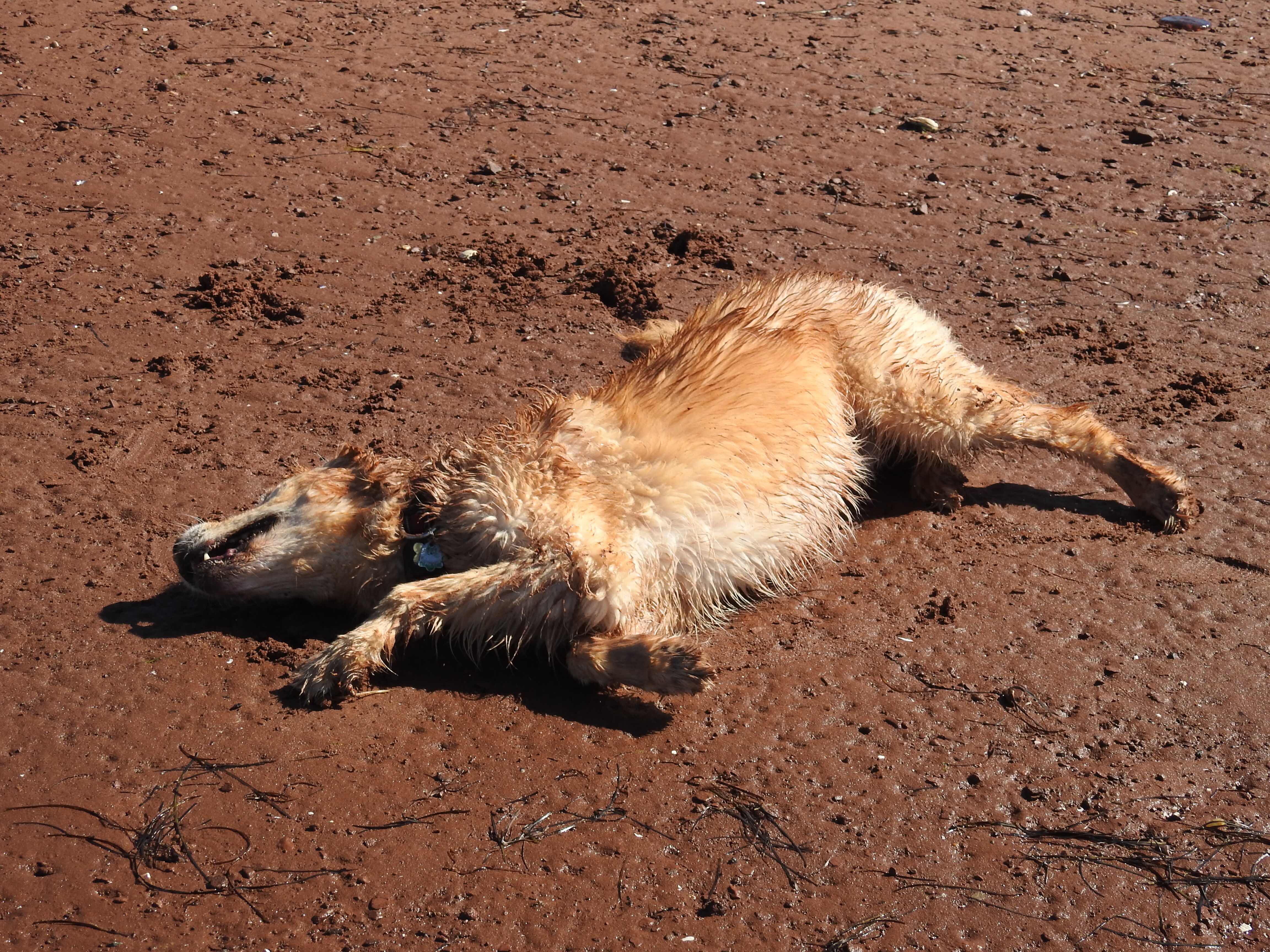 She prefers being dirty and smelly to clean any time, though she enjoys the pampering when she’s groomed. We were lucky Georgie enjoyed the water hose at the house as well.

Georgie found a seal carcass, skin and bones, on the beach the first day we released her. It was difficult to wrestle it away from her. 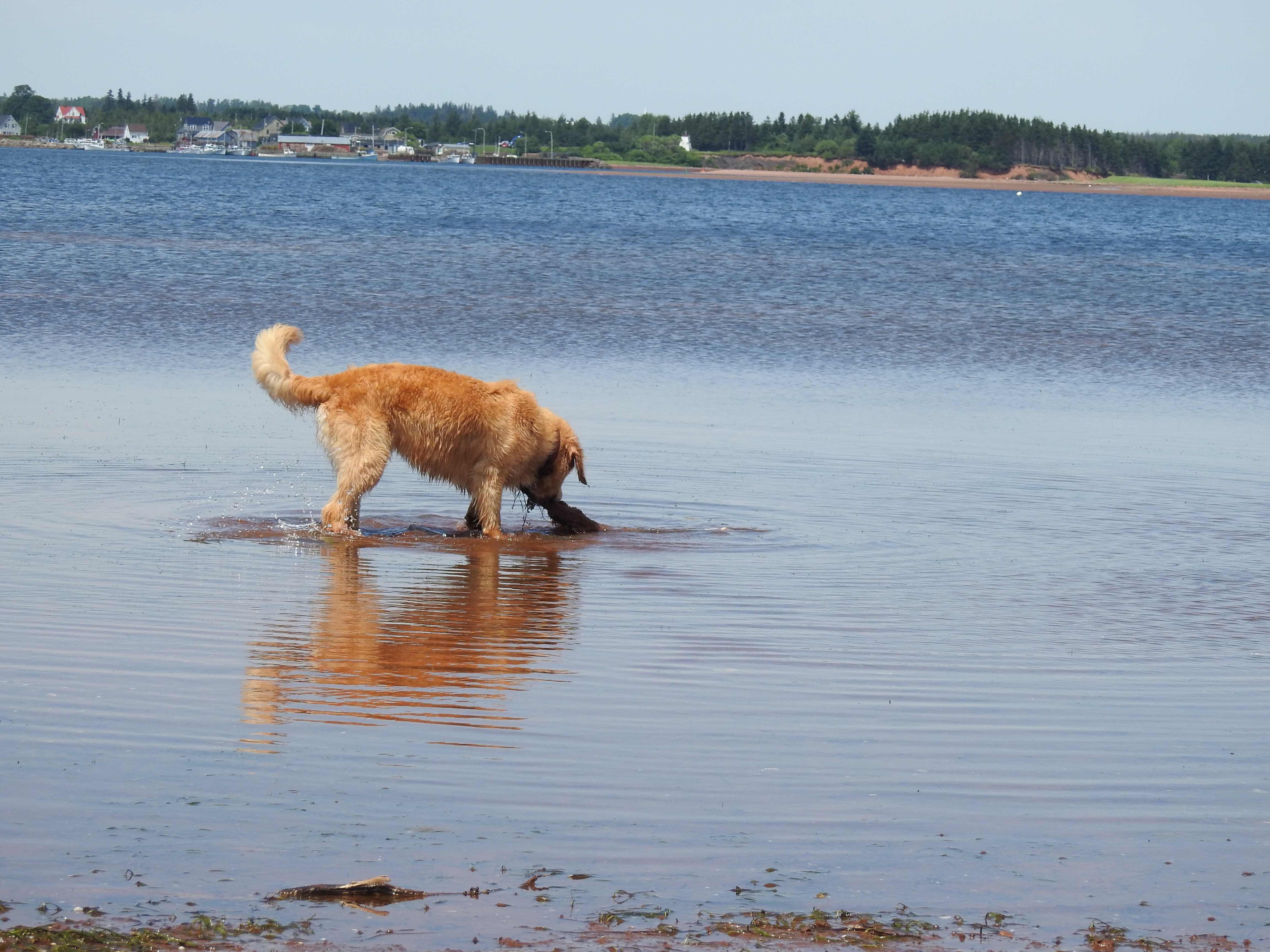 Of course, she knew exactly where we disposed of it and headed for it any chance she had. We had to relegate her to the deck a few times when some of us were on the beach. 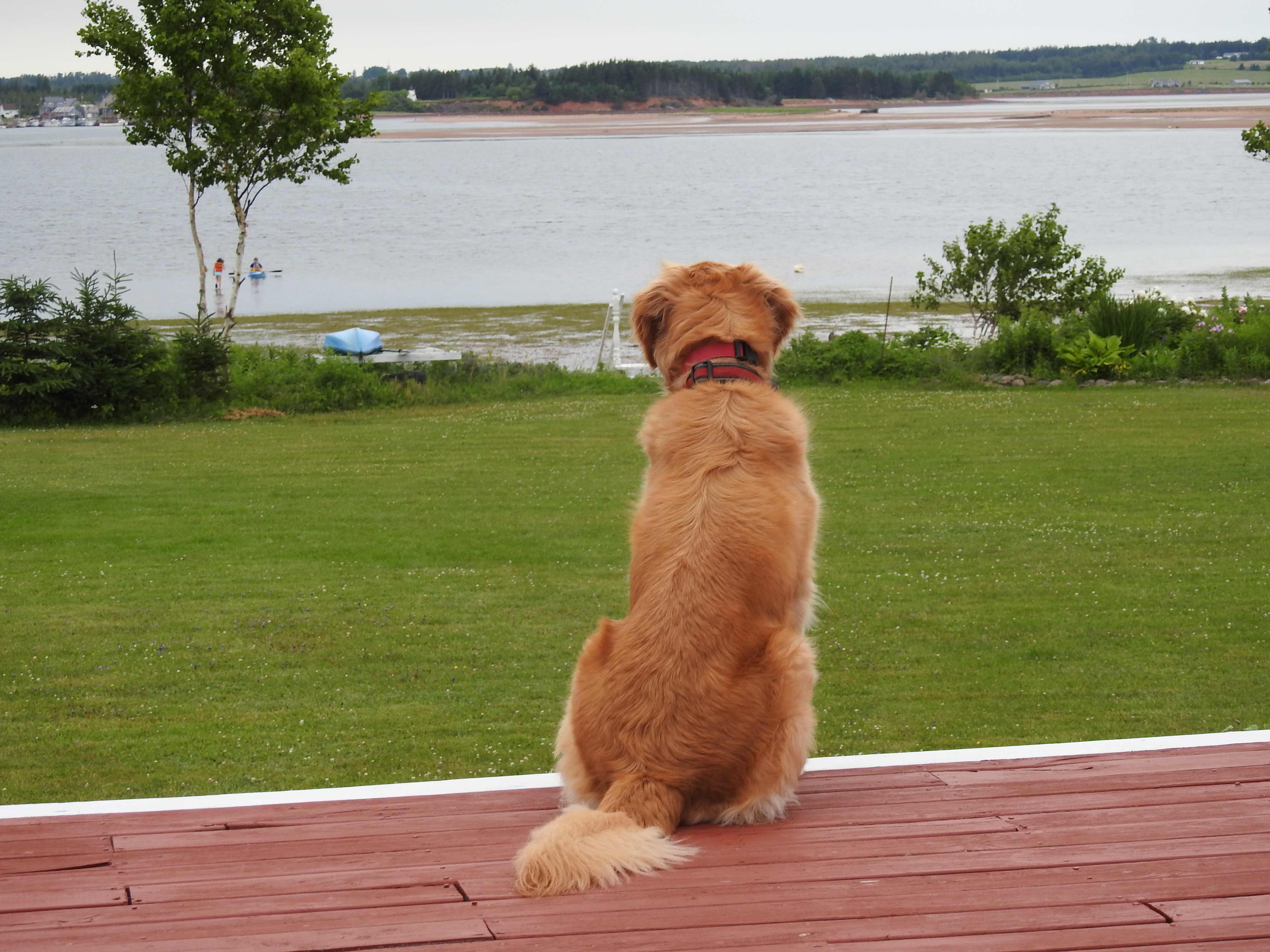 The grand-dog really enjoyed the family soccer game and inserted herself into the middle of the play every opportunity she had. 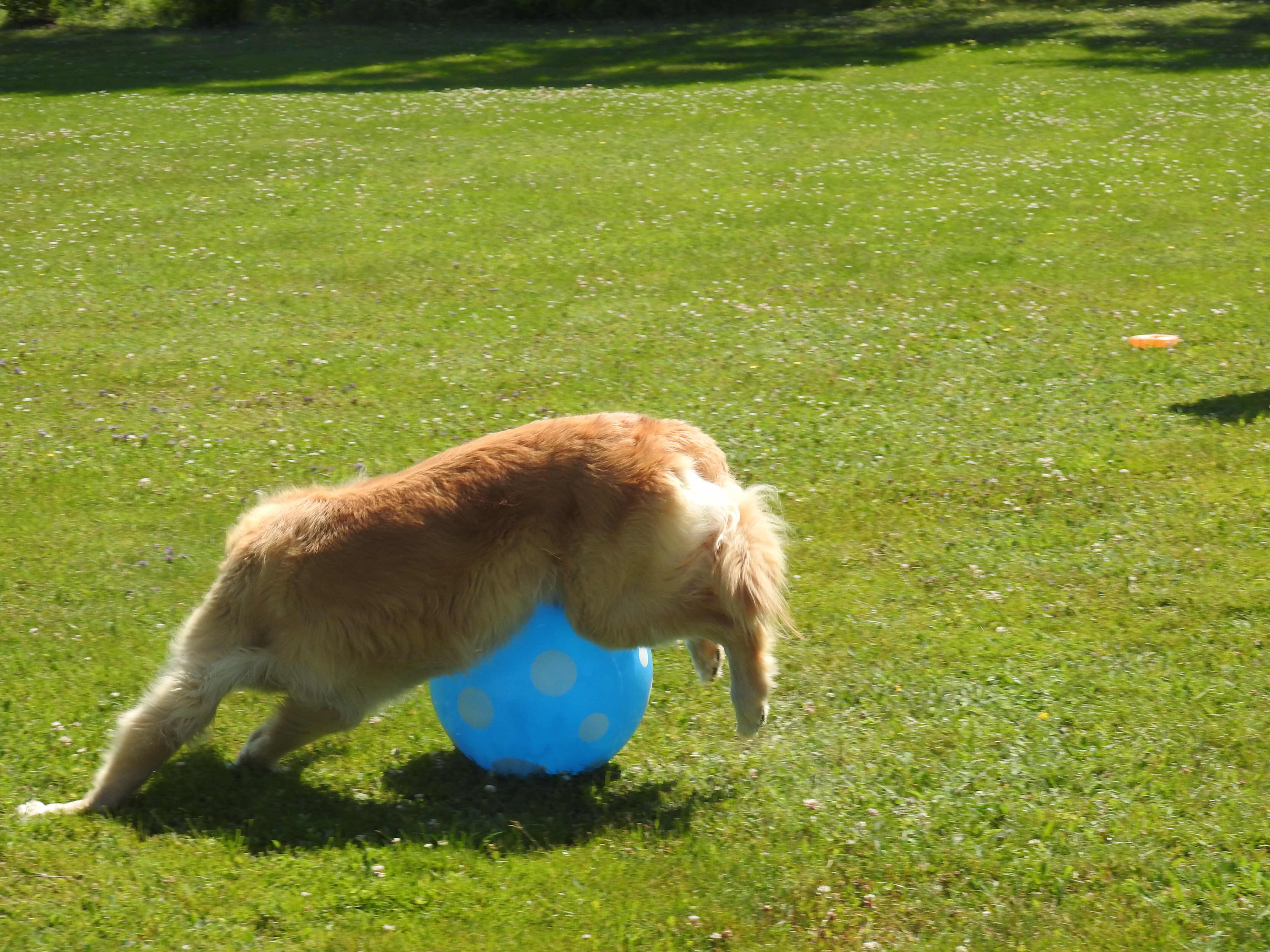 There was lots of room in the van and Georgie was included in our excursions off property as well. She especially enjoyed the ice cream in Souris and the water at Knox’s Dam. However she never strayed too far from one year old Owen because he is most likely to drop food or actively feed her. 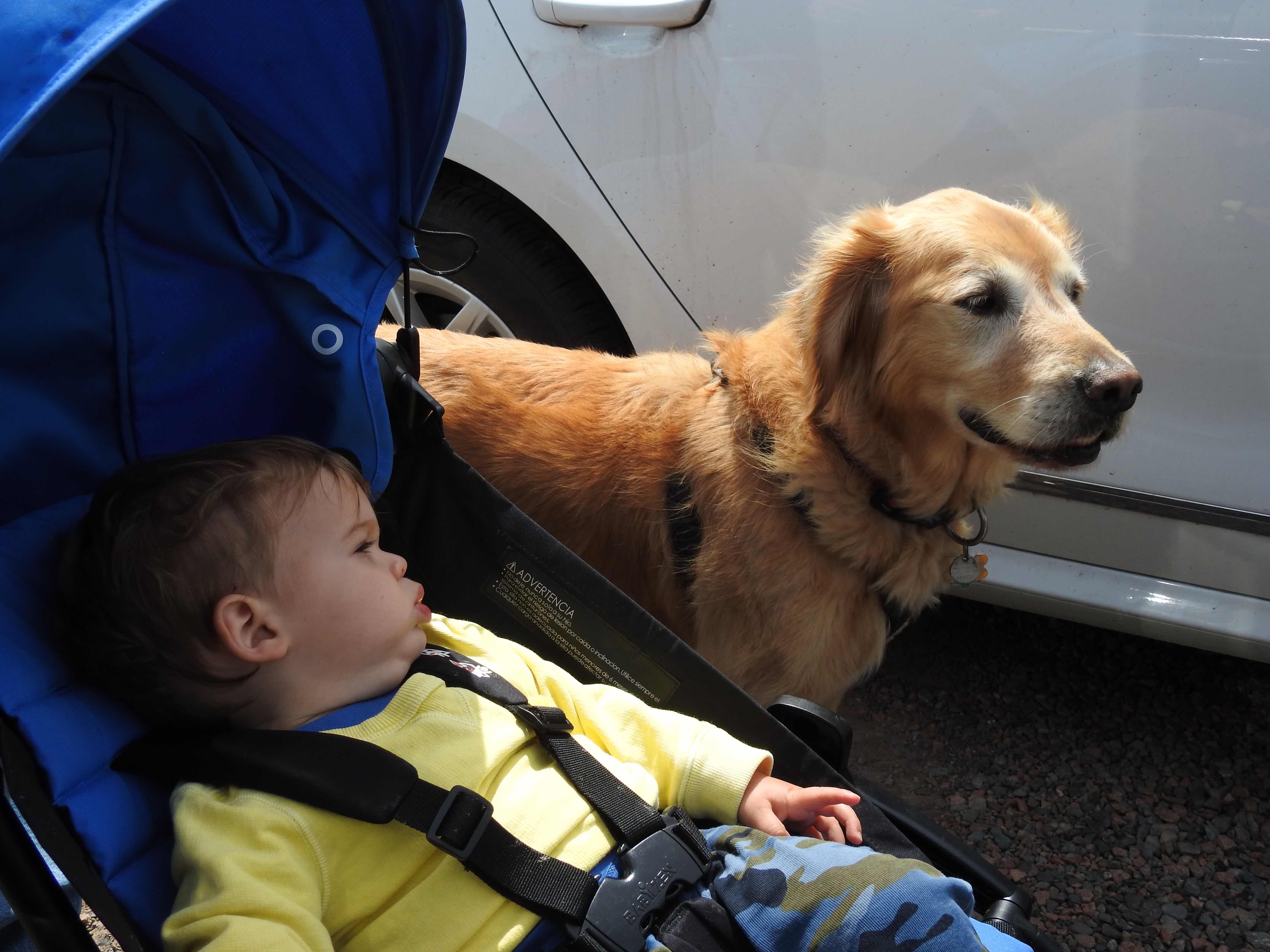 The golden loved clams and was known to eat any, shell and all, which lay on the sand. A tight grip on the lead was essential on the beach.

The first few nights around the fire were nerve wrecking because Georgie didn’t understand the danger. By the end of the week however, she stayed close beside us without much effort on our part. 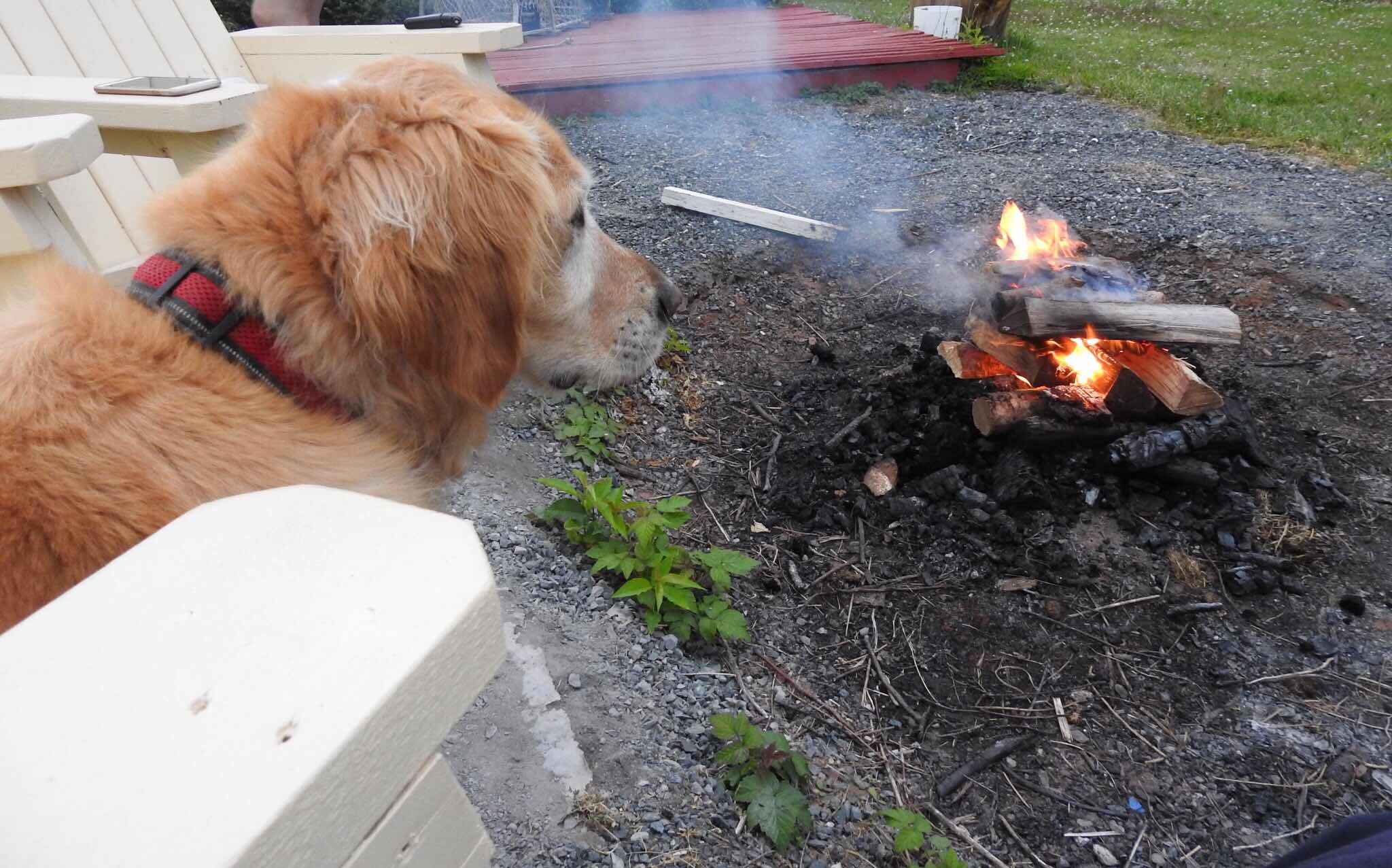 Taking a dog on vacation requires lots of work. However, if you are like us, your dog will provide wonderful stories and memories for years to come. I couldn’t imagine ever leaving Georgie out of a family vacation on the island. 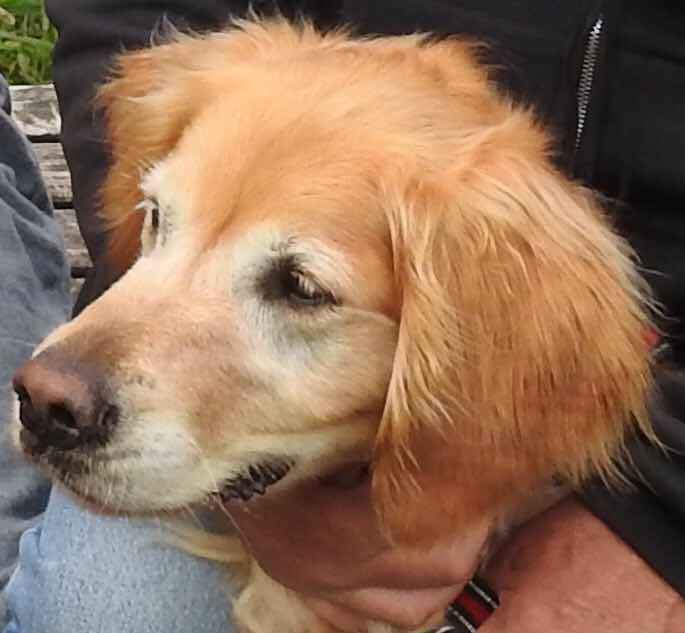 Oh absolutely Marie, especially as you say on a holiday like this. Georgie is like part of the family, she wouldn't talk to you for weeks if the family left her behind.. especially if there was water and smelly carcasses involved 😉

What a sweetheart! I can see why Georgie had so much fun. Look at that face! :-)

Happiness is a soaking wet doggie! She looks like she had a ball.

Awwww love it! I had a golden as a kid and they have a special place in my heart. Also Georgie is having better summer adventures than I am!! lol

What a great getaway Georgie enjoyed. I can't imagine leaving a dog out of any family gathering like you talked about. She created her story in her own way. :)

She has romped her wet and smelly way deep into your heart. Of course. I can remember a German Shepherd who found a very dead cow. The trip home in the car (there was no water nearby) was enjoyed by only one of us.

What a happy dog, and yes nothing better than holidaying with your four footed friends.
Keep well Diane

I couldn't imagine leaving them out of the fun either. LOVE the passed out, shot.

What great shots of the fun with Georgie! She is a beauty, even if she was wet and smelly sometimes :)

awwwww, it’s a dogs life, fabulous captures of your vacation!!!!

It looks like we could all learn a lot from Georgie on how to enjoy vacation. She's quite a cutie.

I can tell Georgie had a great time. And so did the family.
: )

I always enjoying Georgie featured in your posts. She is such an important part of your family and looks as if she is really enjoying her holiday with you all! Sarah x

Georgie is eight Tabor. She is far beyond the pup years though not in personality.

It woukd be hard to leave her boarding kennel Grace. I’d feel guilty though Georgie would love that too, depending on the kennel of course.

She is a big pup really Jan.

Georgis has had a great summer this far Jenn.

We were glad to share in her story Bill.

I can only imagine what that car trip must have been like EC.

We really enjoyed the vacation with the whole family Diane.

We need to be reminded every so often that Georgie is a dog. She manages to remind us in a wet smelly way Jenny.

It really is a dog’s life Debbie.

Three dogs are a lot of work for sure RK.

I think we can learn a lot from dogs about life generally Linda.

My husband and I love Georgie as if she was our own Sarah. She completes our family.

A retriever, indeed, Marie! She's gorgeous and I can just imagine how much she added to the adventure for one and all. Sweet memories.

Walking down the street so fancy free...