Every now and then my husband and I come across a plant/tree which is unfamiliar and sparks our interest. Such is the case with these evergreen branches that grow out of the ground rather than grow from a stem or trunk and grow tall. This is the Canadian/American yew also known as the ground hemlock. 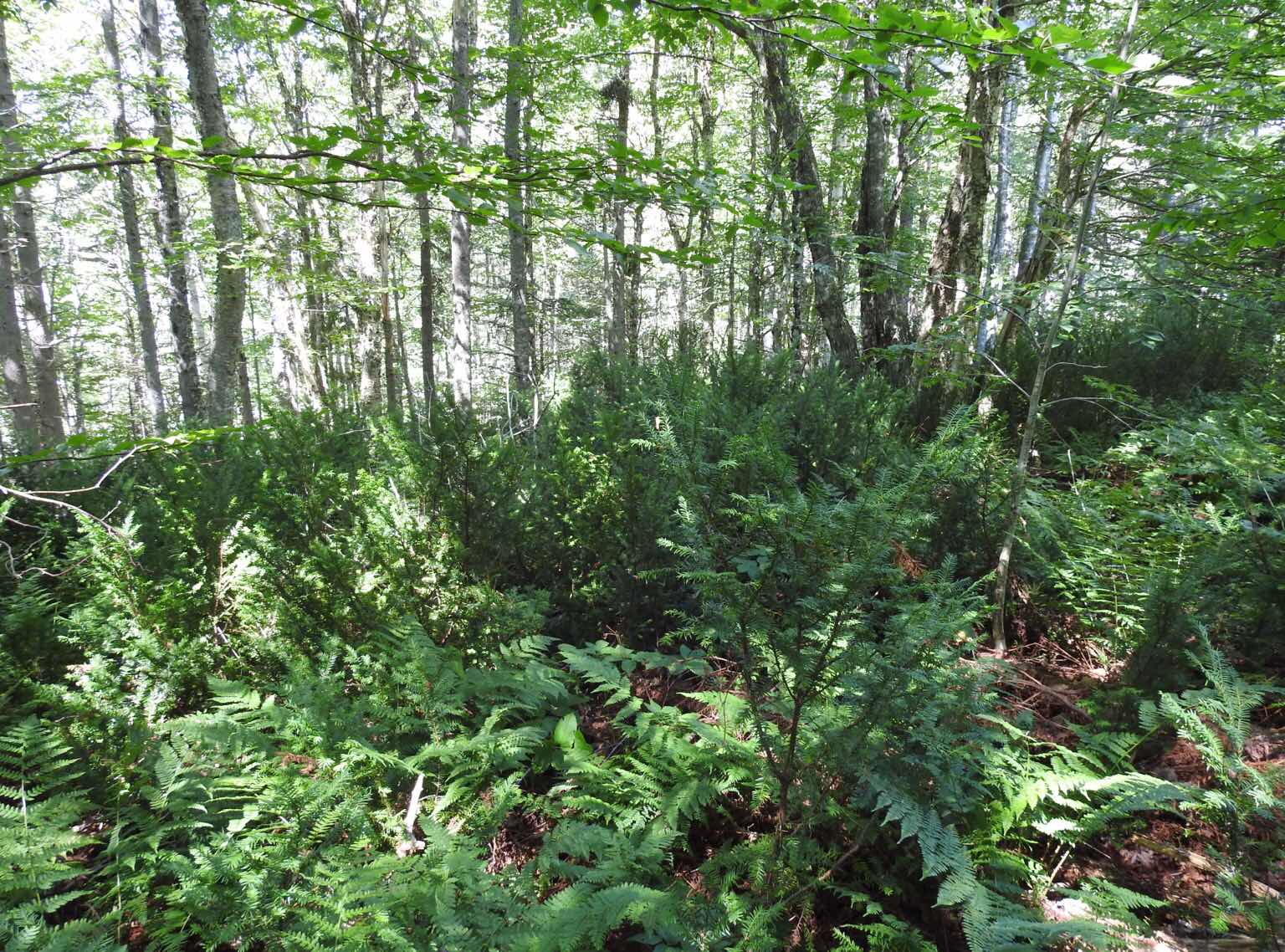 This is not the same plant which killed Socrates but it is toxic nonetheless. This coniferous hemlock, unlike the famous herbaceous kind the ancient Greeks used to kill condemned prisoners, was used by the Indigenous people of North America in their herbal medicine to treat rheumatism.

Today, ground hemlock is harvested from May-August on Prince Edward Island. Because most all of the plant is toxic, the harvesting is regulated and harvesters must be trained and licensed. The plant is used in the production of the anti-cancer drug Taxol and other similar drugs.

This plant is part of the underbrush in the forest and is easy to overlook. It resembles fir branches growing out of the forest floor. 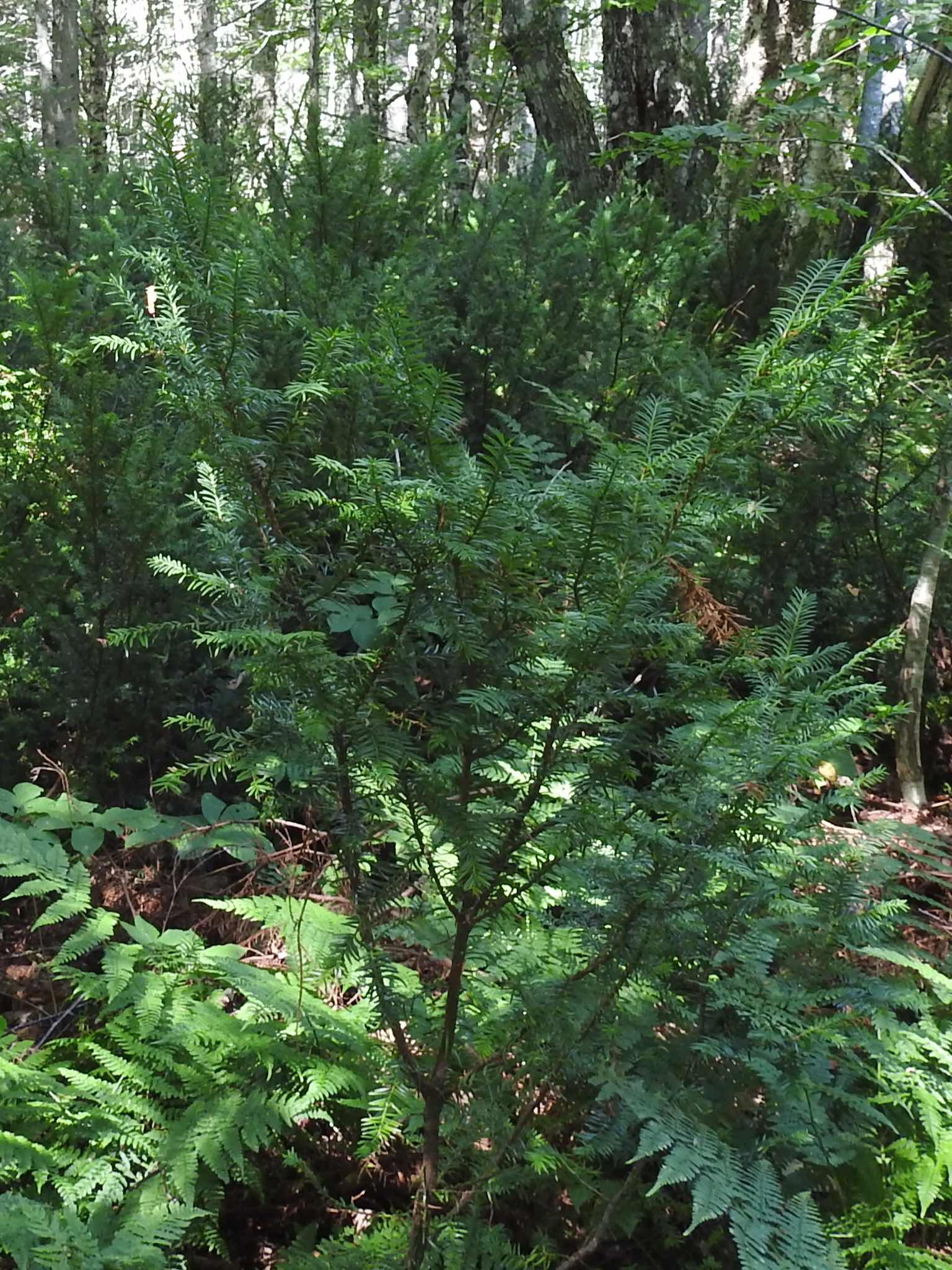 It is so much more however. Because of its toxicity, it gives hope to millions of people with cancer. Ironic, though not Socratic irony. However maybe Socrates himself would stretch the definition in this case.

Interesting! Have never heard of this plant before!

I never heard of it before! What an interesting plant. And I don't think I've seen it anywhere, either. But I could have overlooked it, as you say. :-)

I had some in my yard at my former home. I didn't realize it was was toxic or so useful, it was attractive in my of small woodland like yard.

Really amazing photos of this forest, I love seeing vegetation like this. Looks like you had a great day exploring. Thanks for the share, have a fantastic weekend. Keep up the posts.
World of Animals

Well how about that Marie, it looks so familiar to what I see growing in the bush when we go on our walks, but it can't be the same plant!

Good to know! We planted hemlock trees in our front yard and there are many throughout the woods here. Your dog is a full-adventure dog! What fun...so cute! Andrea

Fascinating. I love that scientists/doctors are realising just how much validity the 'old wives' tales about healing properties of plants carry.

Interesting! I just had to read more on the yew tree.

It is very pretty to see and such an interesting background. I never knew that, thanks for sharing.

i often don't pay much attention to this green vegetation, but i don't know why!! pretty pictures, it is not familiar to me!!

Interesting, I did not know there was a ground Yew but I have heard of hemlock, obviously one and the same. The only yew I know is Taxus baccata which is the European Yew tree. Also very toxic, we have some not far from us here that are supposedly over a 1000 years old. Enjoy your weekend, Diane

hmmmm... didnt know about this plant. I wonder if it grows here in Ontario? I'll have to keep my eyes open next time I take TessaDog to the forest.

It was new to us as well Debra.

It looks like tree branches growing out of the ground Jan.

It certainly fills in the forest floor Celia.

We had a great day of exploration for sure.

It may be a related species Grace.

It is a lovely green William.

I didn’t know much about hemlock prior to finding these plants Andrea.

I know EC, plants have the answers we need in many circumstances. Though I can’t imagine how that testing went to find that perfect amount of bemlock which was just toxic enough!

They are fascinating Jenn.

I didn’t either Bill.

Neither did I Catarina.

That undergrowth is easy to overlook Debbie.

it is in eastern Canada so probably in Ontario as well, Shammi.

Yew just never know what secrets something will yield.

Ever the wordsmith AC. Love it!

I know Yews grown down here but your plant doesn't look the same so I guess we have a different variety. So glad to know, I will remove it if I do see one similar.

It would be good to remove it Barbara.