On a recent outing, my husband and I went to Strathgartney Provincial Park. This is a day use park which is well maintained, sitting among the Bonshaw Hills. It offers a beautiful view of the surrounding countryside. 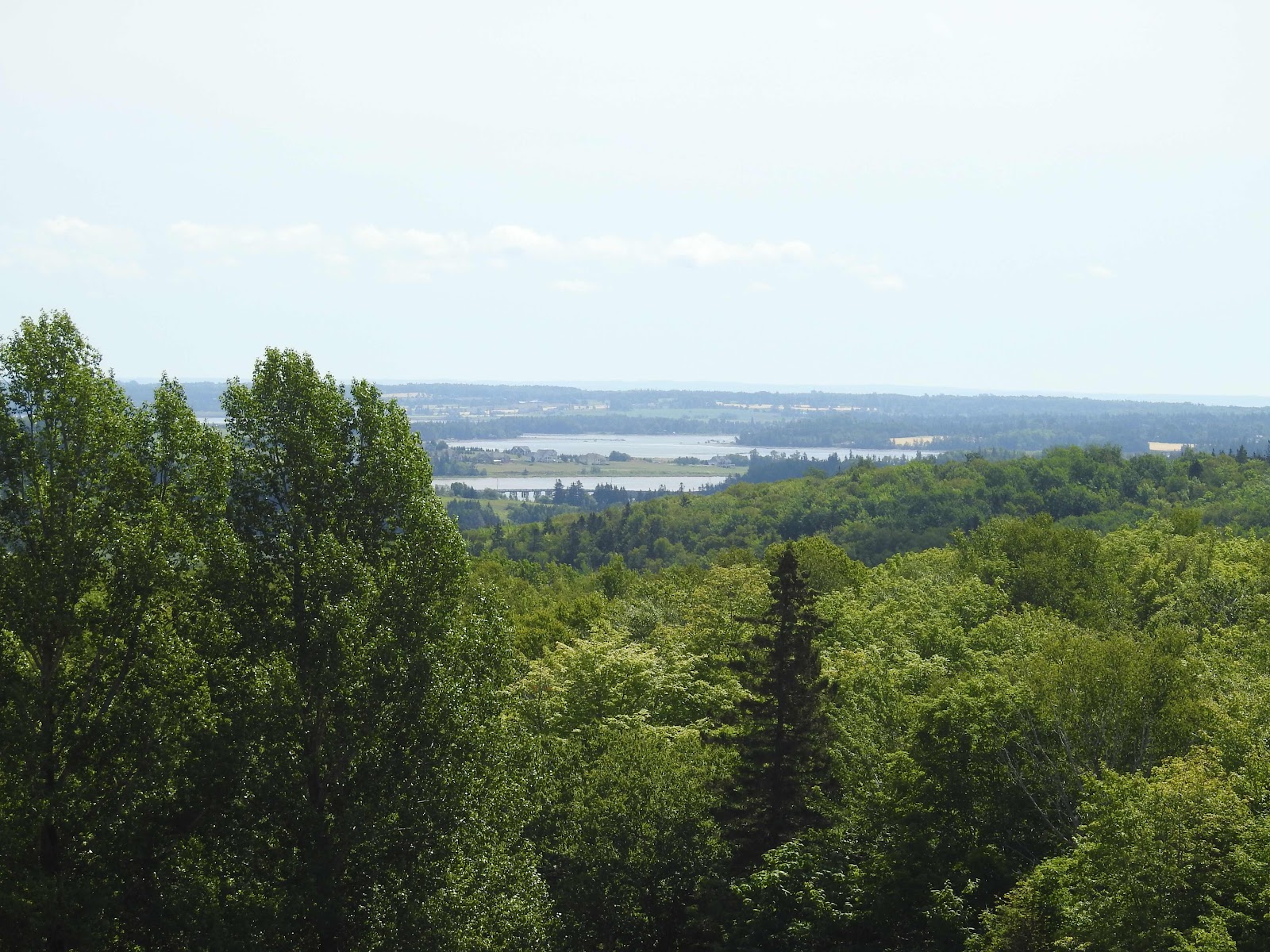 Prince Edward Island is like a sandbar in the Gulf of St. Lawrence and doesn’t have mountain vistas. The highest point on the island is a mere 140 meters or 459 feet. The view from the hill in Strathgartney is a rare treat.

We had a picnic in the park and walked its perimeter. 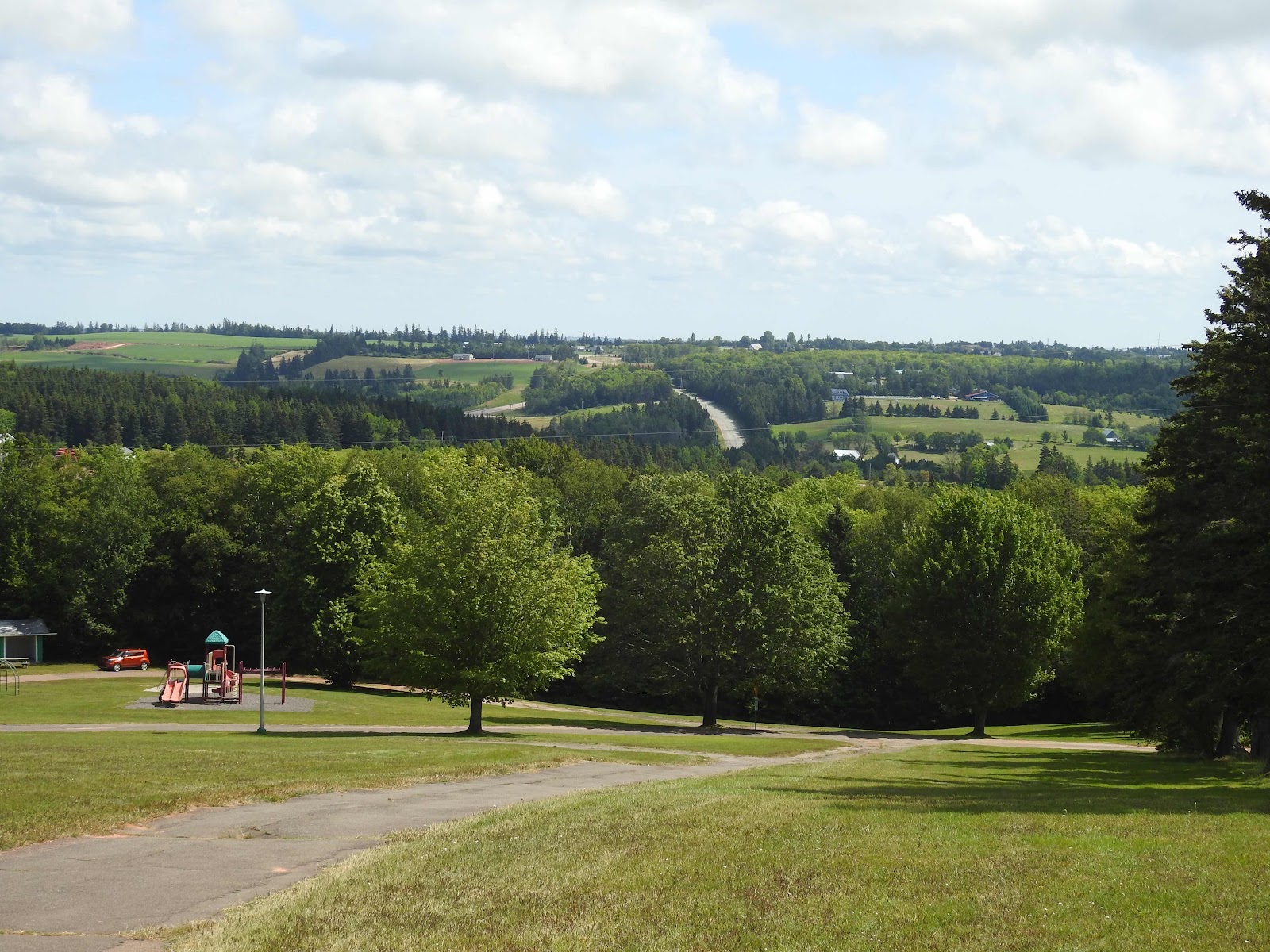 The park sits alongside the trails of the south side of the Bonshaw Hills so we took the golden grand-dog, Georgie for a walk on one of the trails we had yet to explore.

The Woods Road trail was wider than most of the trails in this area but grown in over the years. 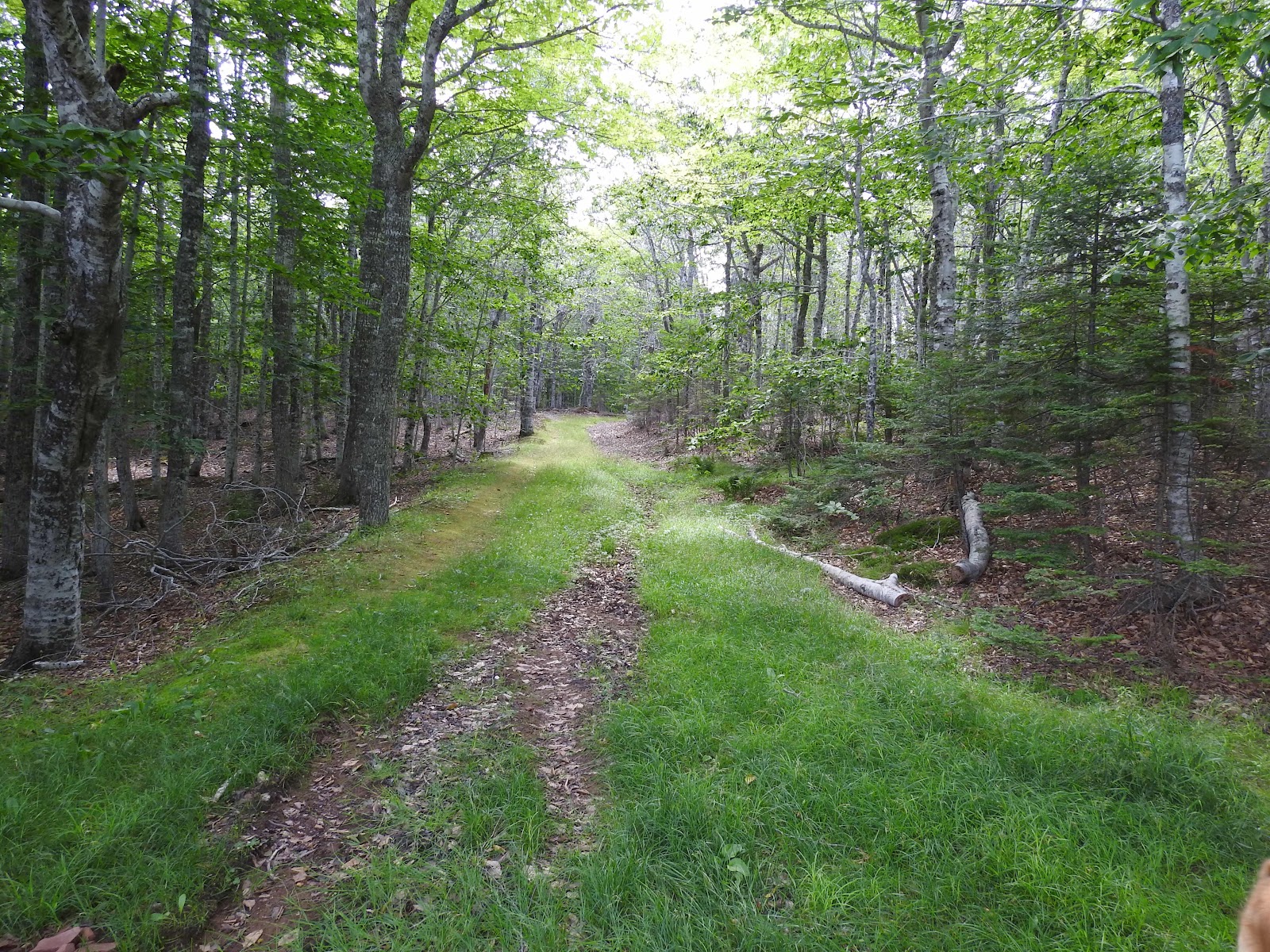 The trail heads up hill initially, then down to the point where it is joins another trail along the West River. We walked downhill along the other trail, then returned the way we came. 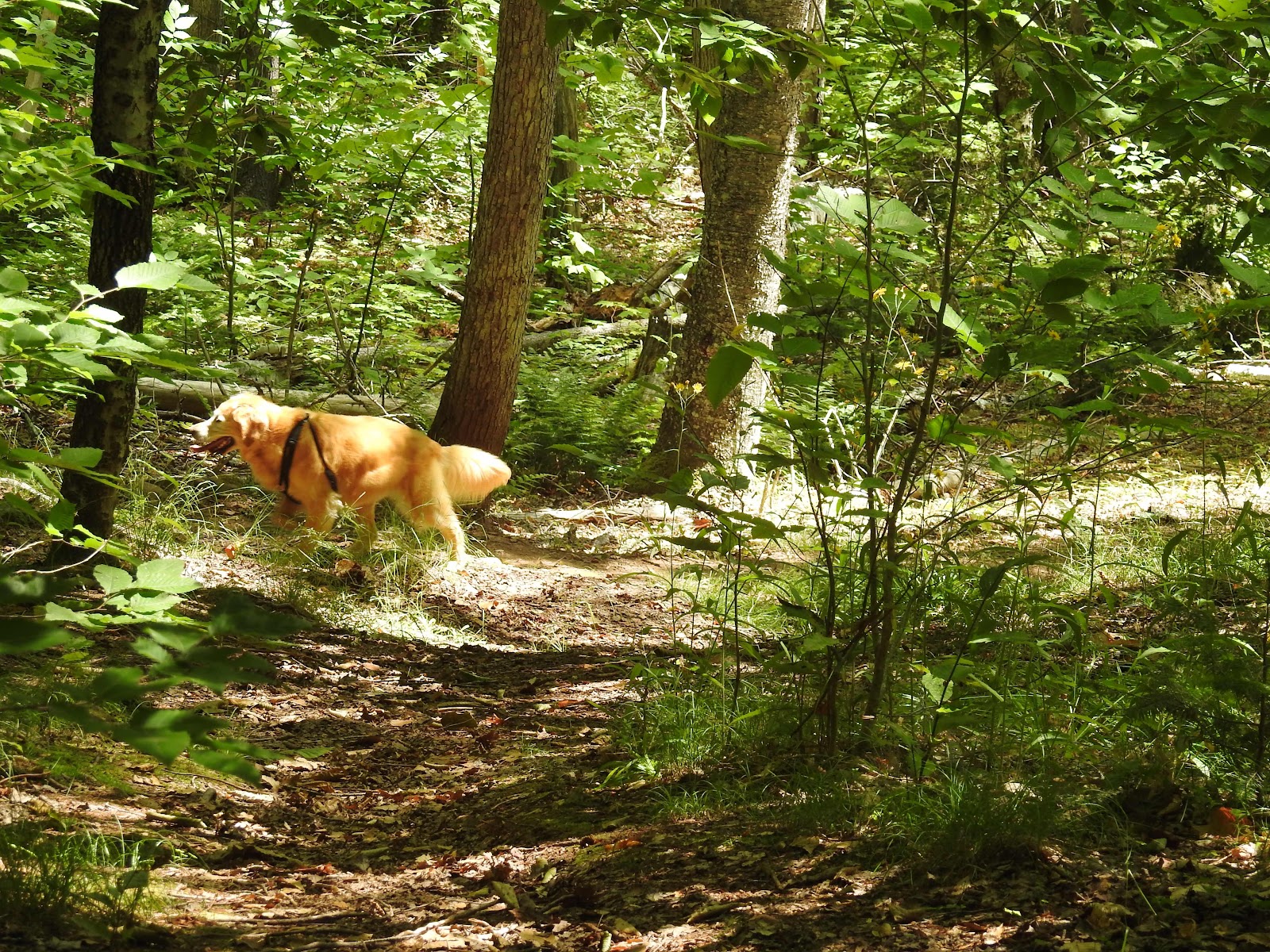 The trek back to the Woods Road was quite steep and challenging but we managed it without too much problem. Georgie loved it but she wasn’t as spry going back as she had been initially. 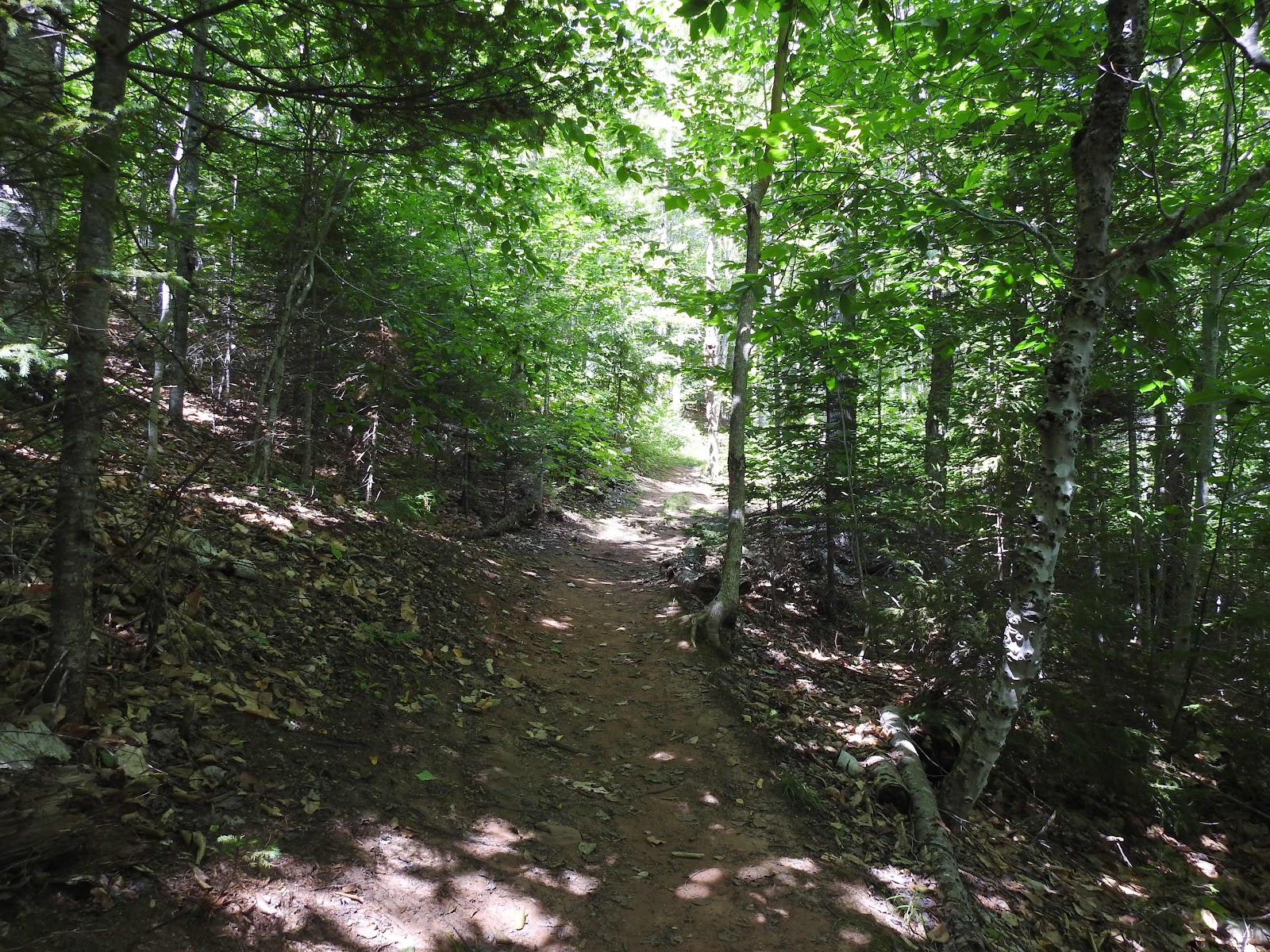 We will return to this park in the autumn to view the surrounding countryside in its autumn glory.

Posted by Marie Smith at 04:18
Email ThisBlogThis!Share to TwitterShare to FacebookShare to Pinterest

It's a beautiful place, and I look forward to seeing it in its autumn finery. :-)

Gorgeous views and a nice walk. Georgie must have been a happy dog. Enjoy your day, wishing you a great weekend!

Morning Marie.....Have you and your man always been into nature or is this something you picked up after retirement? It's great that you both enjoy the out of doors so much. Great photos.

Funny how dogs do not know how to pace themselves.

Beautiful photos! Your header photo can make a postcard. I love the sheared alpacas (previous post) and the honey building. And the quaint church....that is the type I'd love to go to. Andrea

Looks like a beautiful spot. I am waiting to see those fall pictures from there.

The dog seems happy to be able to run free. A lovely place indeed. Great photos Marie!Have a wonderful weekend.

What a gorgeous place to walk and see the sights.
The Island has always been on my bucket list...
Wishful thinking...

wow, it is lovely there, you captured some really beautiful areas. it should be gorgeous come the fall!!

I am so grateful that you take us along.

Parks are four seasons of beauty.

It is a beautiful park...I would want to go back there as often as I could.

Spending time in nature makes us happier and, consequently, healthier.

We are having autumn-like weather right now. Temporarily, of course, but it is approaching rapidly.

Oh look! A hill!!!!!
Looks like a great place to walk and of course, it's always fun with Georgie. I have had TessaDog all week so have gone for lots of doggy walks.

Georgie is a lucky dog Marie, so many beautiful walks. Can't wait to see this walk in Autumn too. We are only a week away from spring here in Australia 🌸

Glad Georgie gave her approval for this great trail walk. :) It will look magnificent in the fall with all the foliage.

Looks like a great day. Such a nice park and your hike sounds fun. I think you're right returning for fall color should be fabulous.

Beautiful. I know how Georgie feels. I'm on the second floor so I take the stairs a lot. Some days I run up them, others I pull myself up by the handrail. Haha.