One of my favourite settings in the world is a beach. This feeling about beaches developed during my childhood by the sea. At that time, it was the North Atlantic and a beach with smoothed beach rocks rather than sand. For me, the sound of the sea is like music, the smell of the sea takes me back in time and the sight of its gentle lap or waves of various heights comfort me. It is one of the reasons I love Prince Edward Island so much. Though it is part of my psyche, the sea is also physically near wherever I am on this island.

A recent wander brought my husband and I to Thunder Cove, on the central north coast. The beach there feels like it goes on forever. 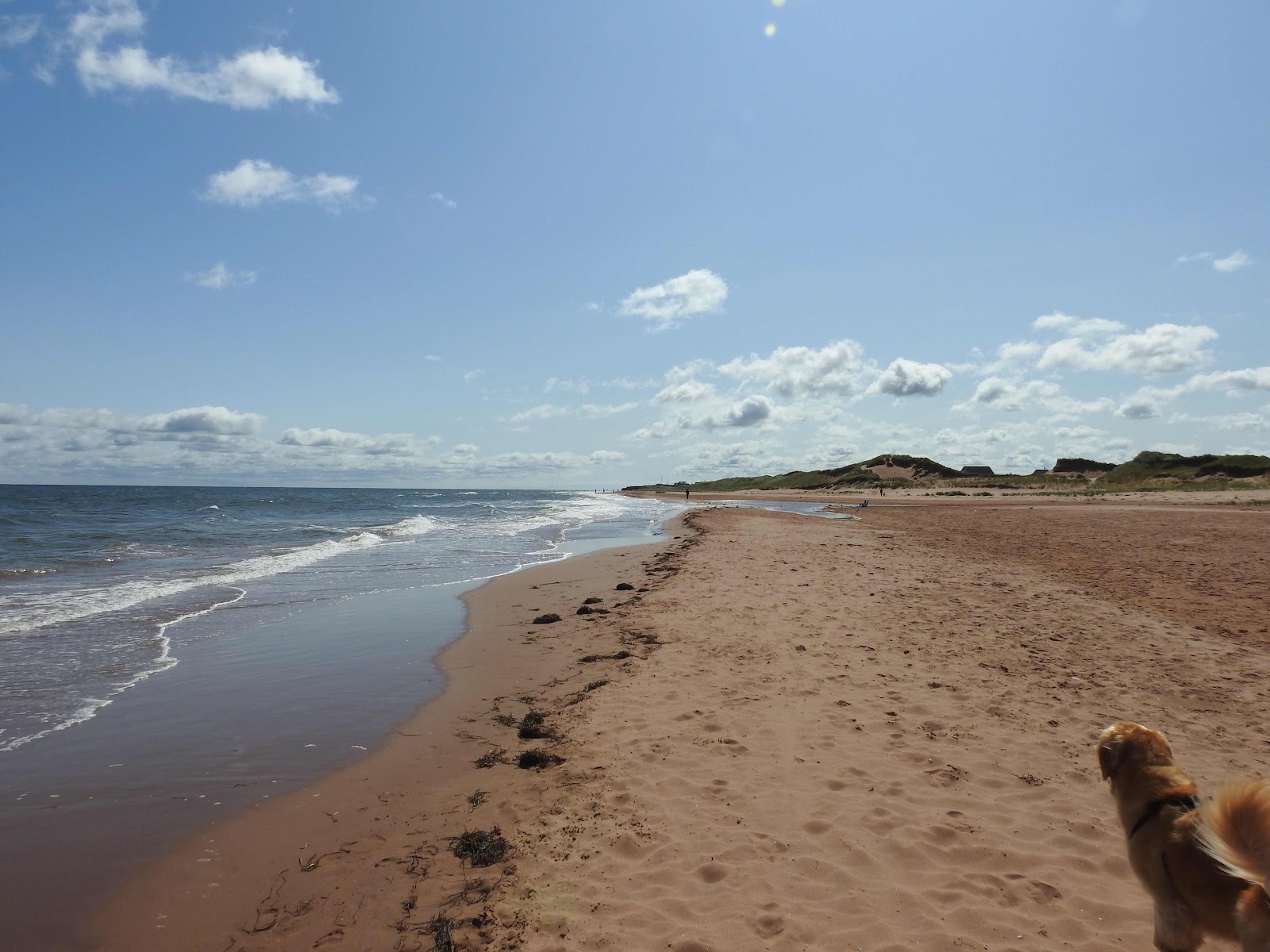 From the red cliffs near the parking area, the shoreline becomes sand dunes covered in Marram grass behind which are several areas with cottages, though few are visible from the beach. This beach is pristine, beautiful red sand with little seaweed at the high tide mark. 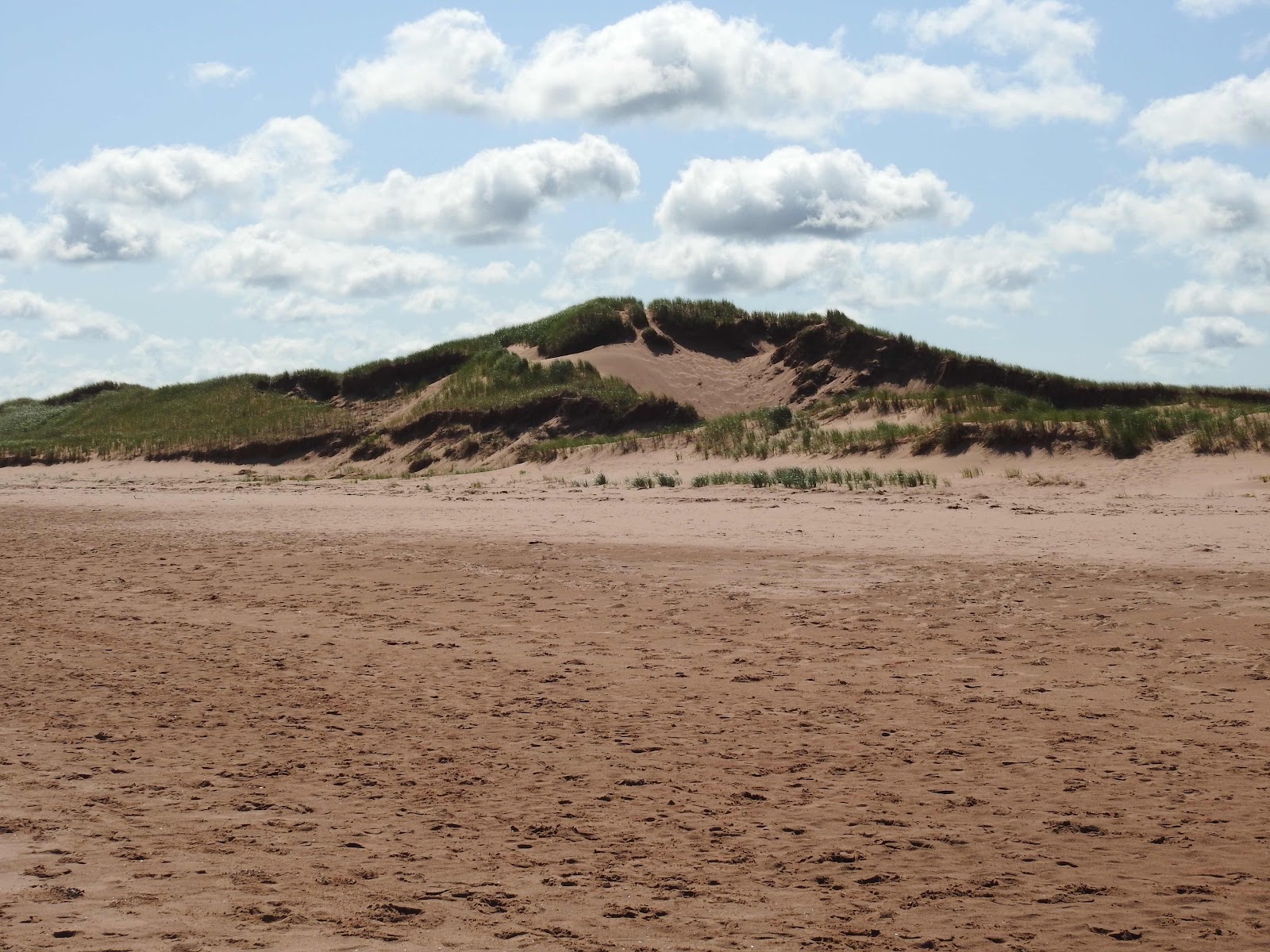 It wasn’t crowded. The further we walked, the more likely the beach goers were cottagers accessing the beach via an occasional trail through the dunes or stairs. 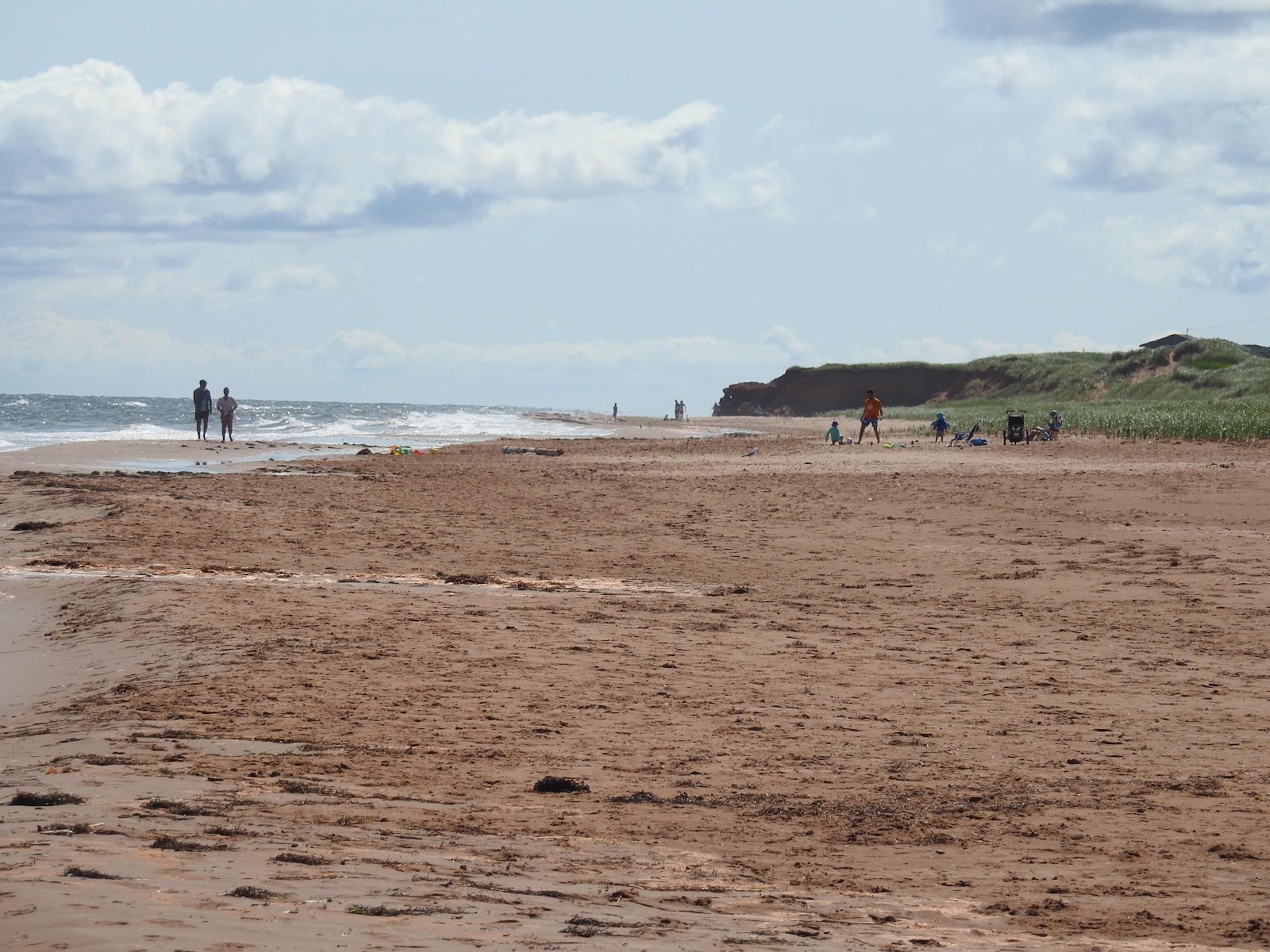 We kept the golden grand-dog on lead because Semipalmated plovers darted along the sand as the waves lapped the beach. 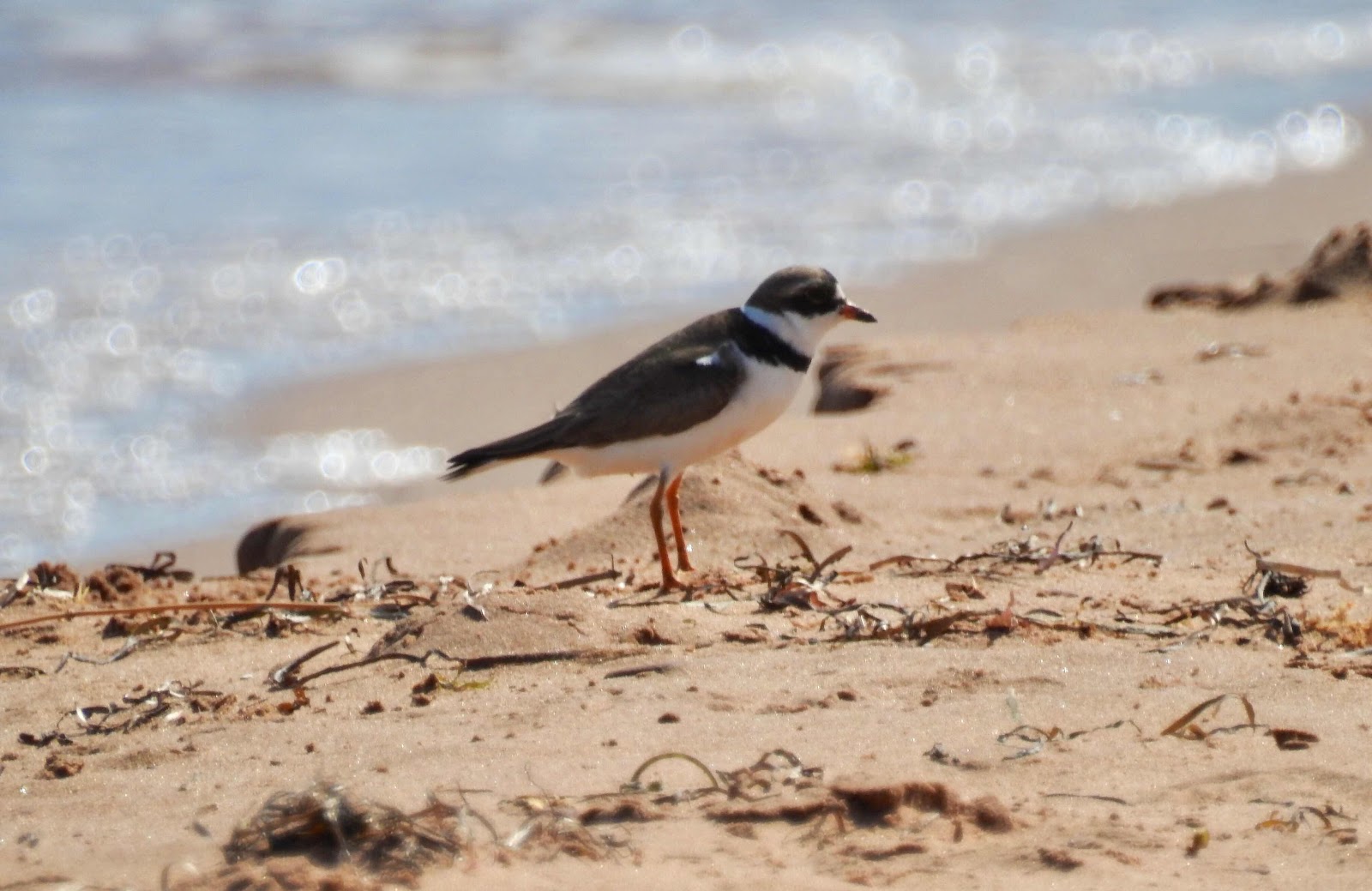 At the east end of the beach, more sandstone cliffs separate Thunder Cove from the next beach, a shorter though equally beautiful one.

The sandstone here is well weathered and doesn’t look stable. It is not an area for climbing though one might be tempted to do so. Above in the earth over the sandstone, a hole indicates a bird might be home, probably a bank swallow. 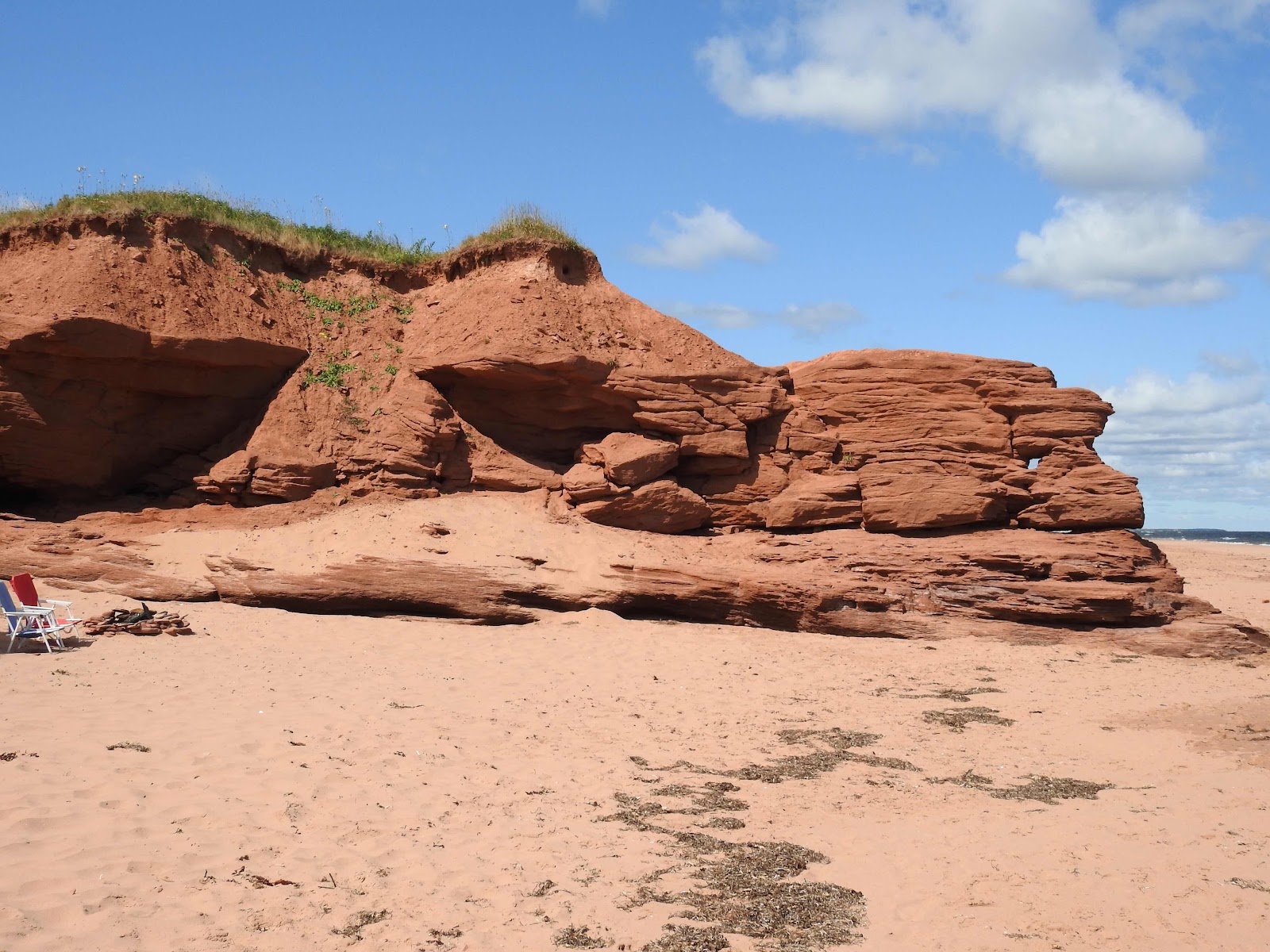 Two men prepared to launch a catamaran into the on-shore breeze as the tide receded. We watched as they hoisted the sails but didn’t see them leave. 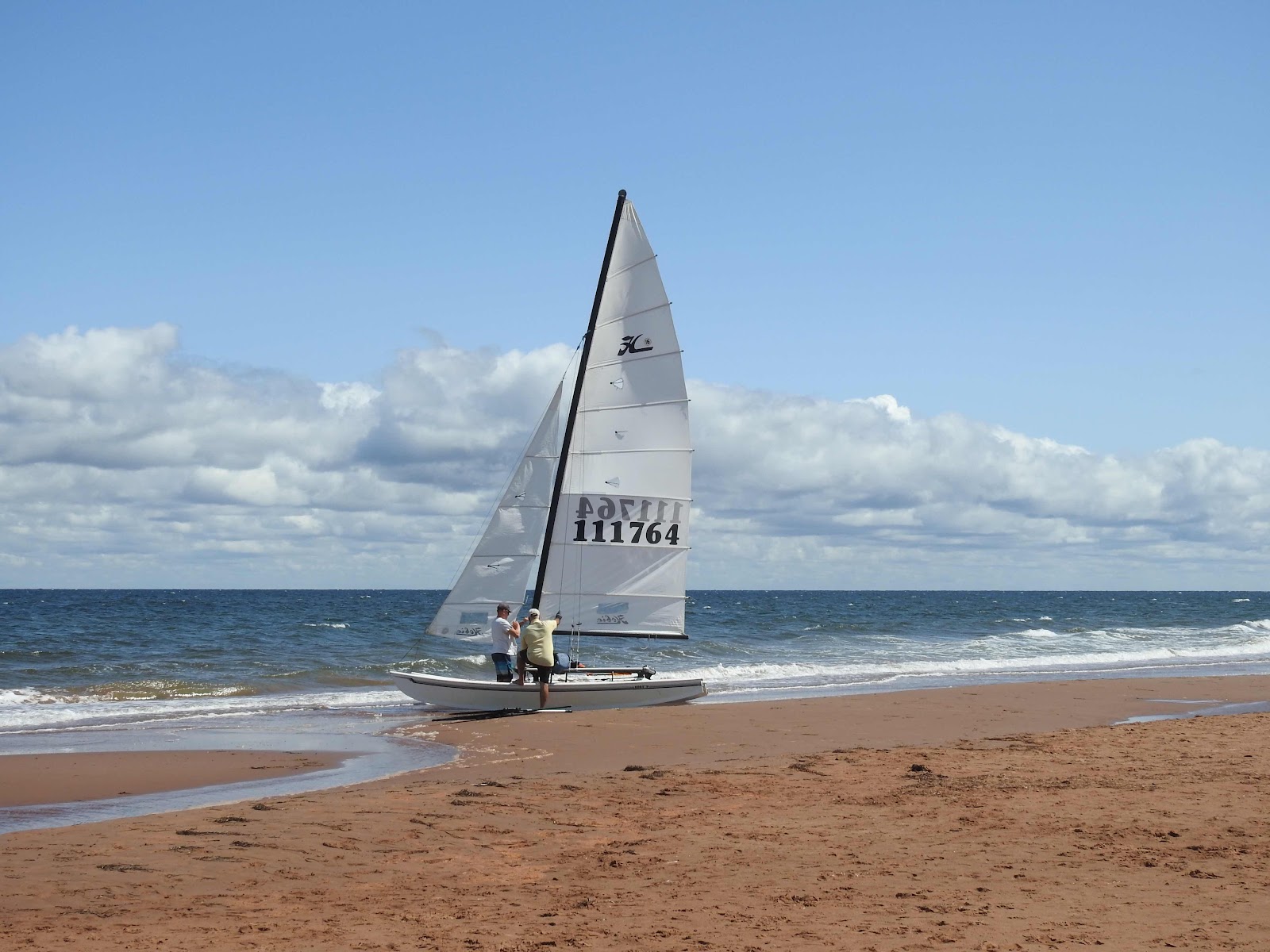 This beach is nothing like the beach of my youth, however, the essentials are the same. The sound, smell and sight take me back to another time and place but one just as beautiful. The truth is when the sea is in your blood, you are never far from home.

That red sandstone is just inherently beautiful, isn't it!

I love your beautiful beaches on PEI, and your pictures make me wish I could be there with you. :-)

The beach is my happy place, lovely views and photos. I love the furbaby and the cute Plover. Enjoy your day, wishing you a happy new week!

I couldn't agree more Marie, that's why I love living five minutes from the Indian Ocean. As you say the sounds of the waves crashing.. and that gorgeous smell.. can't beat it 💙

my love for the beach developed in my childhood also!! we don't have the rocks here but we have man made beach dunes!!

your pictures are really beautiful marie, and give a great sense of the beaches in your area!!

ps..with reference to lion king, my great nieces loved the movie but i think they were influenced by their mom. i would not have taken them to see that movie, i did not think it was appropriate for little ones. my great nieces are 5 and 7!!!

I can relate to your feeling about the ocean. As a kid it was a 15 minute walk from my home. I love it and always will.
Nice post and beautiful photos.

That looks like complete heart and soul balm. It is way too long since I have seen the sea. Thank you for the gorgeous photos.

What a lovely beach!

Now I could like that beach! I have only been to the beach once, and it was summer and more people than I cared to be around, except when we got out early. I would love to go back in the off season...but even though I am not as you by the sea...the woods and mountains call to me like that.

I went to the sea very rarely during childhood but those few days made a big impression on my young mind. These feelings are stirred once again by your photos and description.

you have captured the magic of the summer beach. I need to visit one.

connection to water is powerful when you live near sea since childhood dear Marie!

i am so glad that sea is not just inside you but around you as well :)

all shots are stunning but sandstone are elegantly appealing

enjoy the life each breath my dear friend!

I understand completely. I really should travel to the beach more but I'll have to wait for winter so the tourists will clear out. Our beaches are pretty packed down here.

Having moved from a west coast island to a east coast island it is the ocean that is familiar and that has helped me greatly with the transition. Your beach photo’s are perfect.