We were on a quest for starfish. They are plentiful around the mussel farms of Prince Edward Island but we never see them on the beaches. On-line searches revealed Point Prim as a location with starfish in the tidal pools but the information was several years old. Since we could see the area from the beach house, we took the kids for a short drive to check it out. 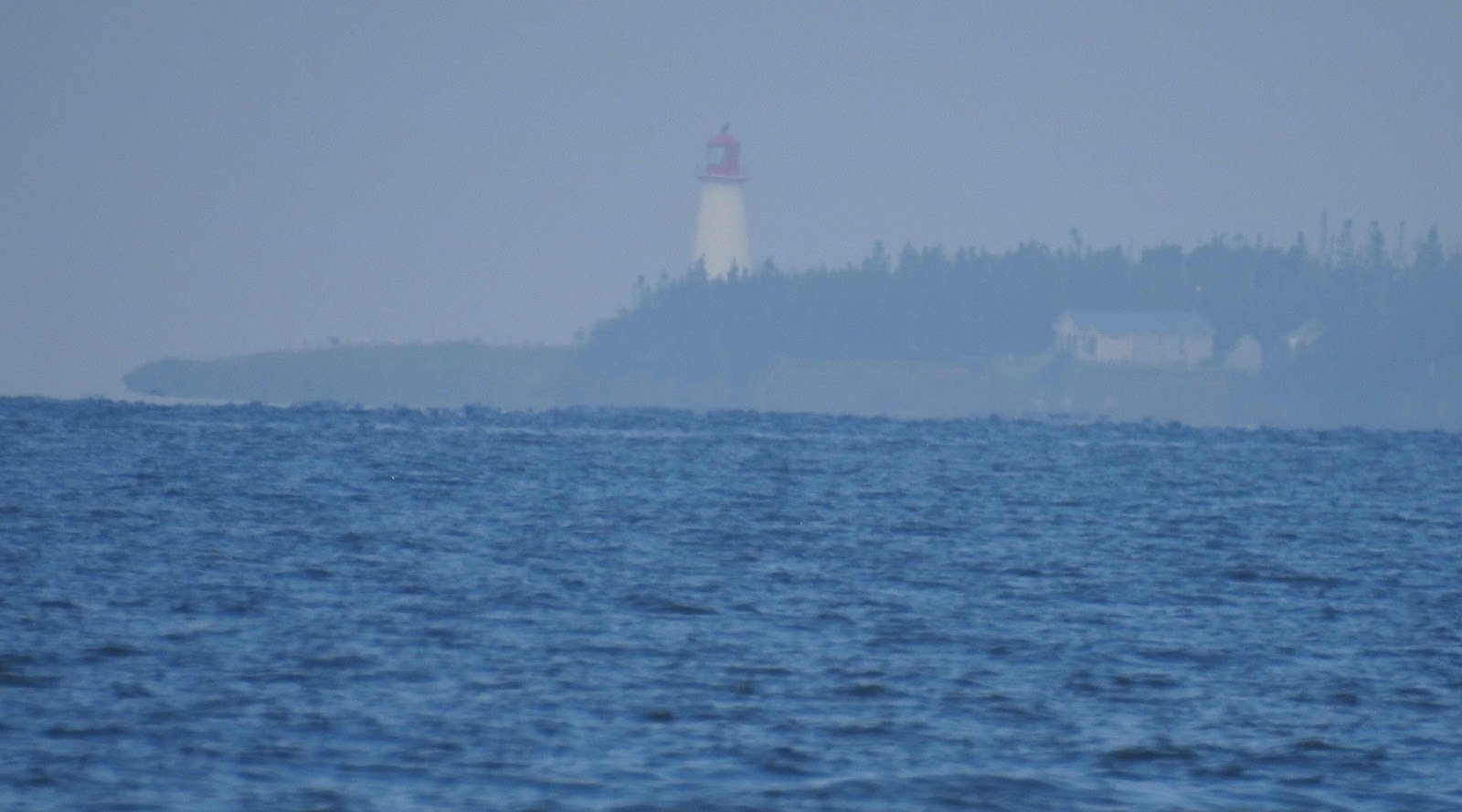 The bonus this day was the lighthouse at the Point. It is the oldest lighthouse on Prince Edward Island, a tapered cylinder which is an unusual design for a lighthouse in Canada. Also unusual, it is made of brick covered in wooden shingles. Built in 1845, it looks good for its advanced years. 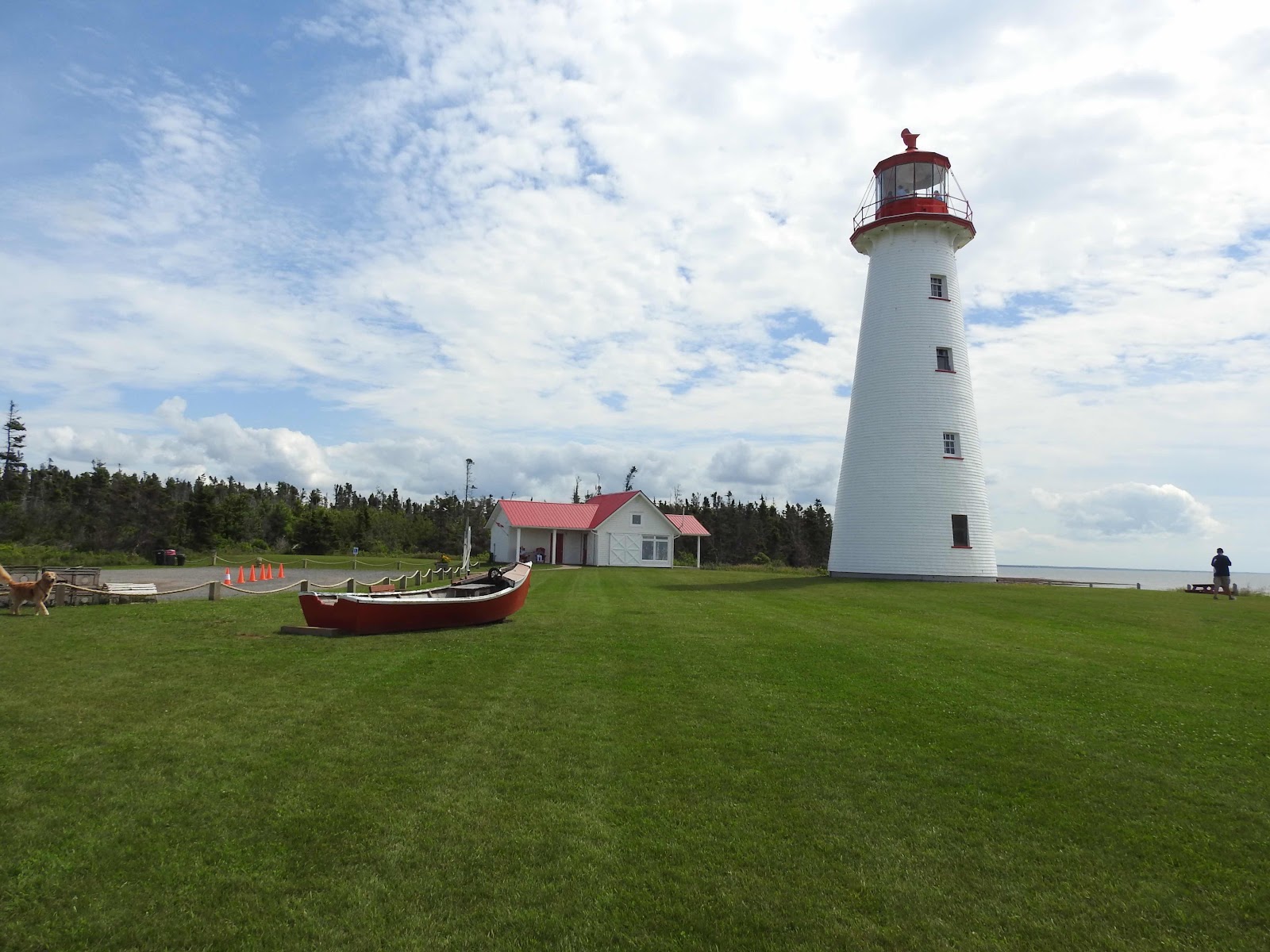 The girls went into the museum and up the tower with their mother while their younger brother stayed with their grandfather and me. Every summer we visit some of the lighthouses around the island and the kids have been to the top of several of them. 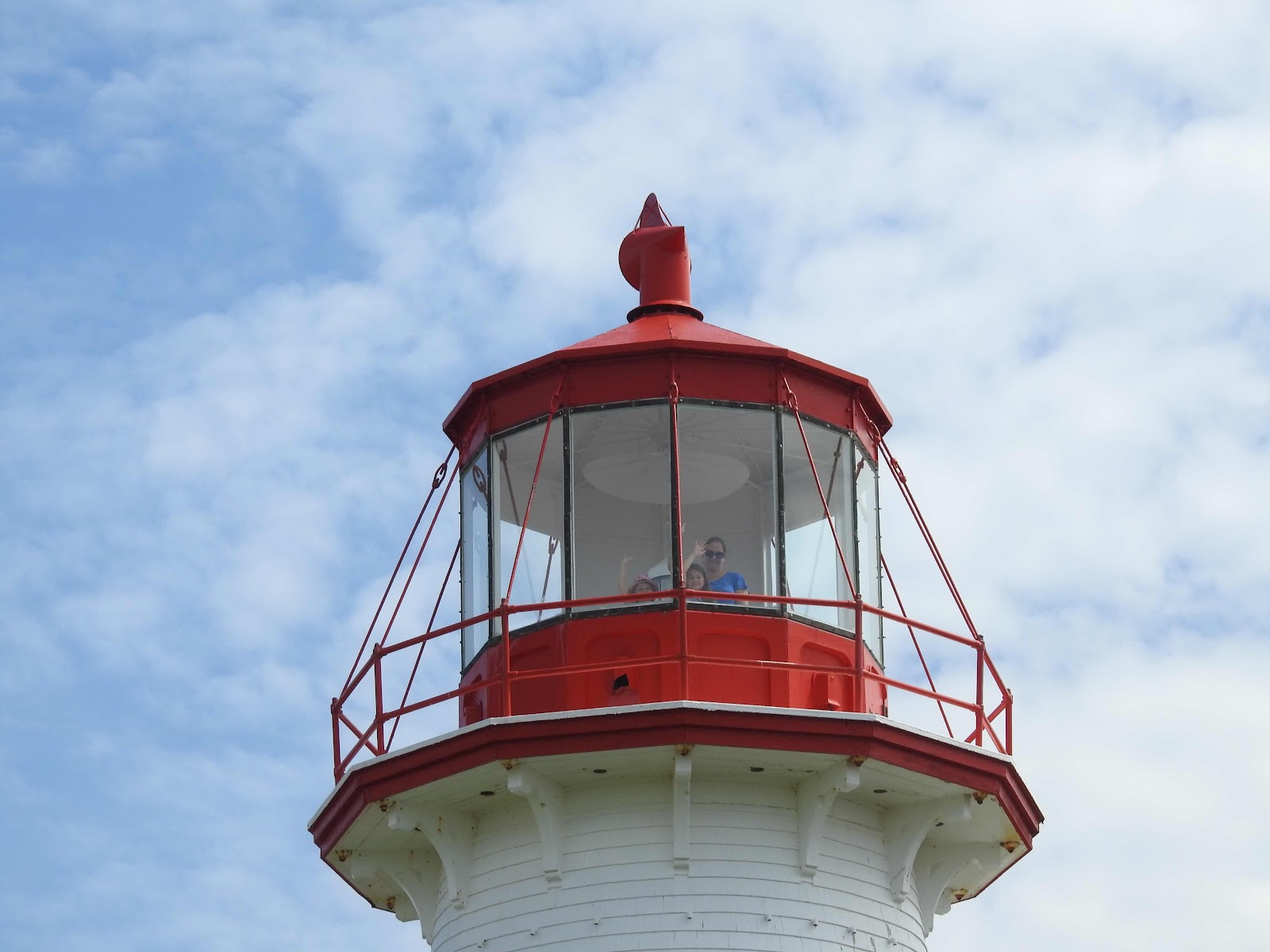 Low tide meant there were numerous tidal pools around the Point and the girls were anxious to search for starfish. Their brother is delighted with everything we do.

We spent an hour exploring the area, without finding any starfish. We did enjoy watching the hermit crabs which are plentiful in the tidal pools. The most interesting feature however was the “white” sandstone which covered the outer area of the beach. 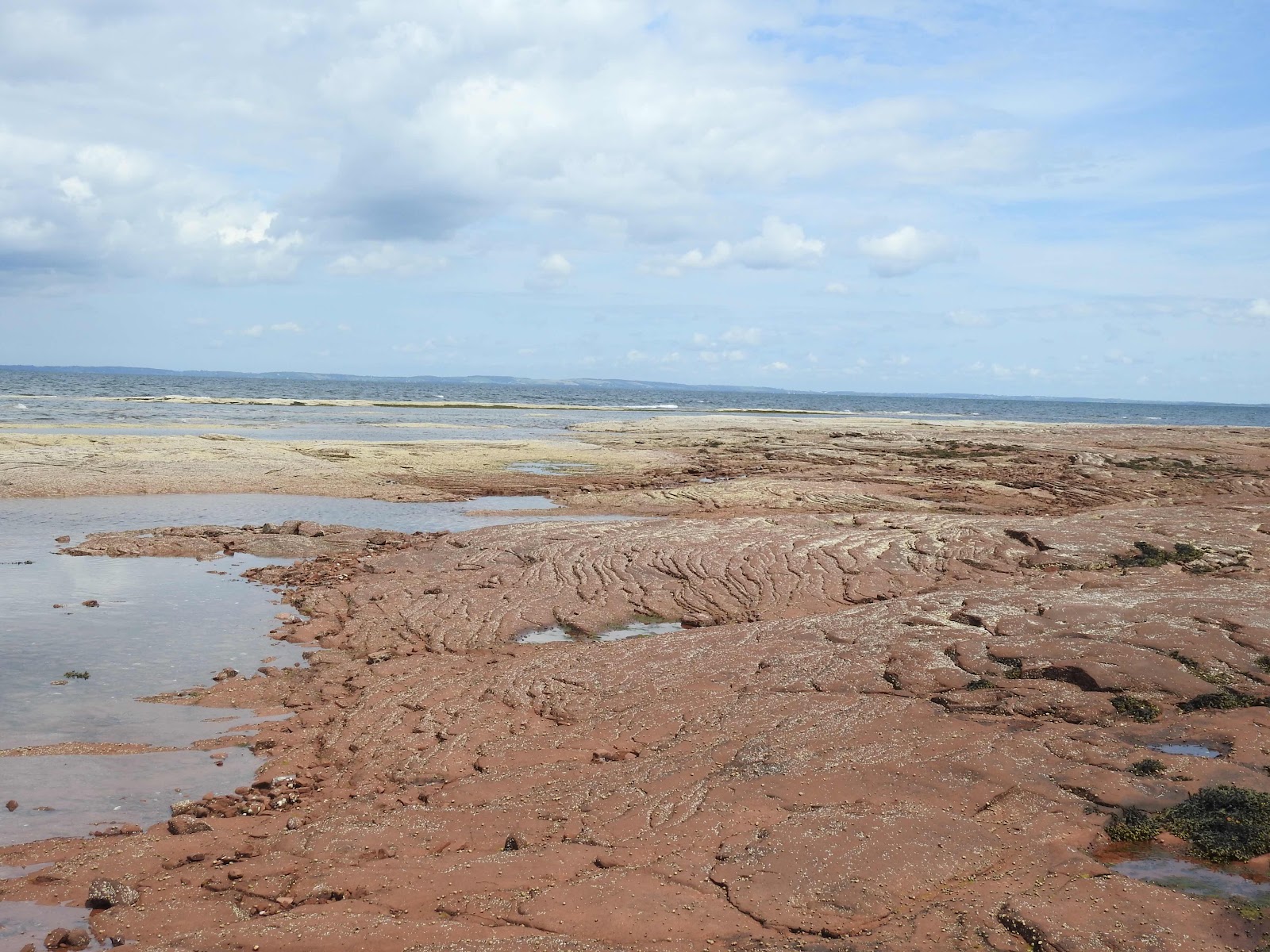 When we looked more closely, we could see the tiny barnacles which covered every available surface of sandstone. Such a curious sight! Barnacles by the millions waited for the sea to return. 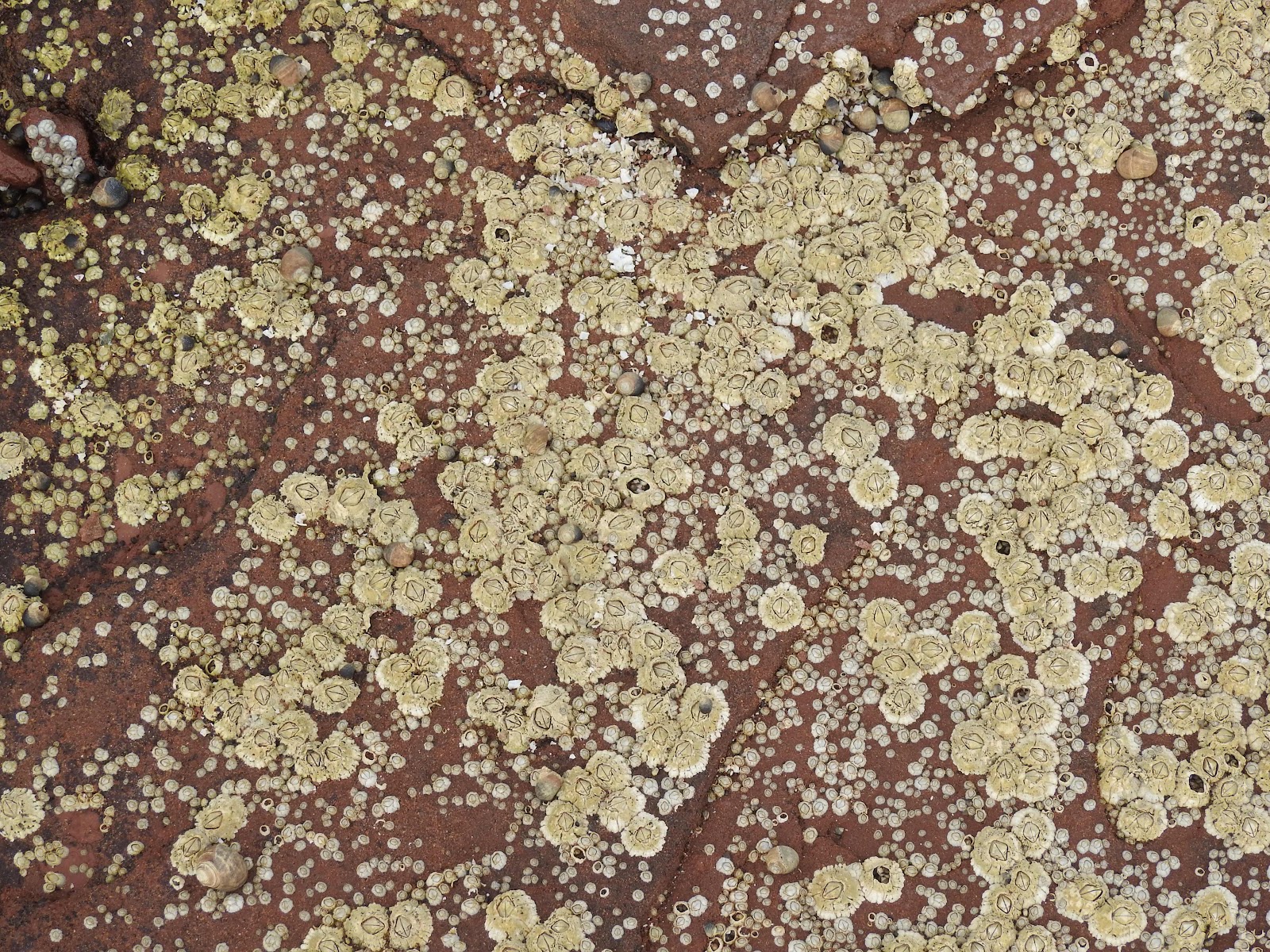 While we didn’t have any luck with starfish, we had a great excursion with the kids.

Lovely lighthouse, and it sure is in good condition for being so old. I like that last picture, too. :-)

The quintessential lighthouse and it looks in great condition. I am not sure I would have taken to the life of the keeper. Too much solitude.

Sounds like a really good walk. Hope you have a good day, Diane

An enviable day trip. Such a beautiful place.

What a beautiful lighthouse. When we visit one, we love to walk to the top and enjoy the view. Great pics, Marie.

It sounds like a wonderful day - for you all. And a day with a lighthouse would always be a winner.

Nice. I have fond memories from my childhood of searching the beach for shells. I never found a starfish in Texas but we did find some in Florida. We enjoyed it so much that we left them for another family to find.

It looks like. a fun place to visit and explore.

I sure hope your grandkids will grow up remembering all these wonderful excursions, Marie, because of how important they are to their Life's Experience. They are so lucky to have you!

I love the lighthouse, the views are beautiful. It is fun exploring the tidal pools. I have only seen starfish on the Oregon coast. Wishing you a happy day and a great weekend ahead.

what a gorgeous lighthouse!!!

So full of interesting places. Kids are ha=evading there for a week soon with their dad and step family.