Every September, some Prince Edward Island farms participate in Open Farm Day and again this year, my husband and I accompanied our daughter and the kids to some of the farms in the west of the island.  One farm breeds and raises alpacas for fibre. 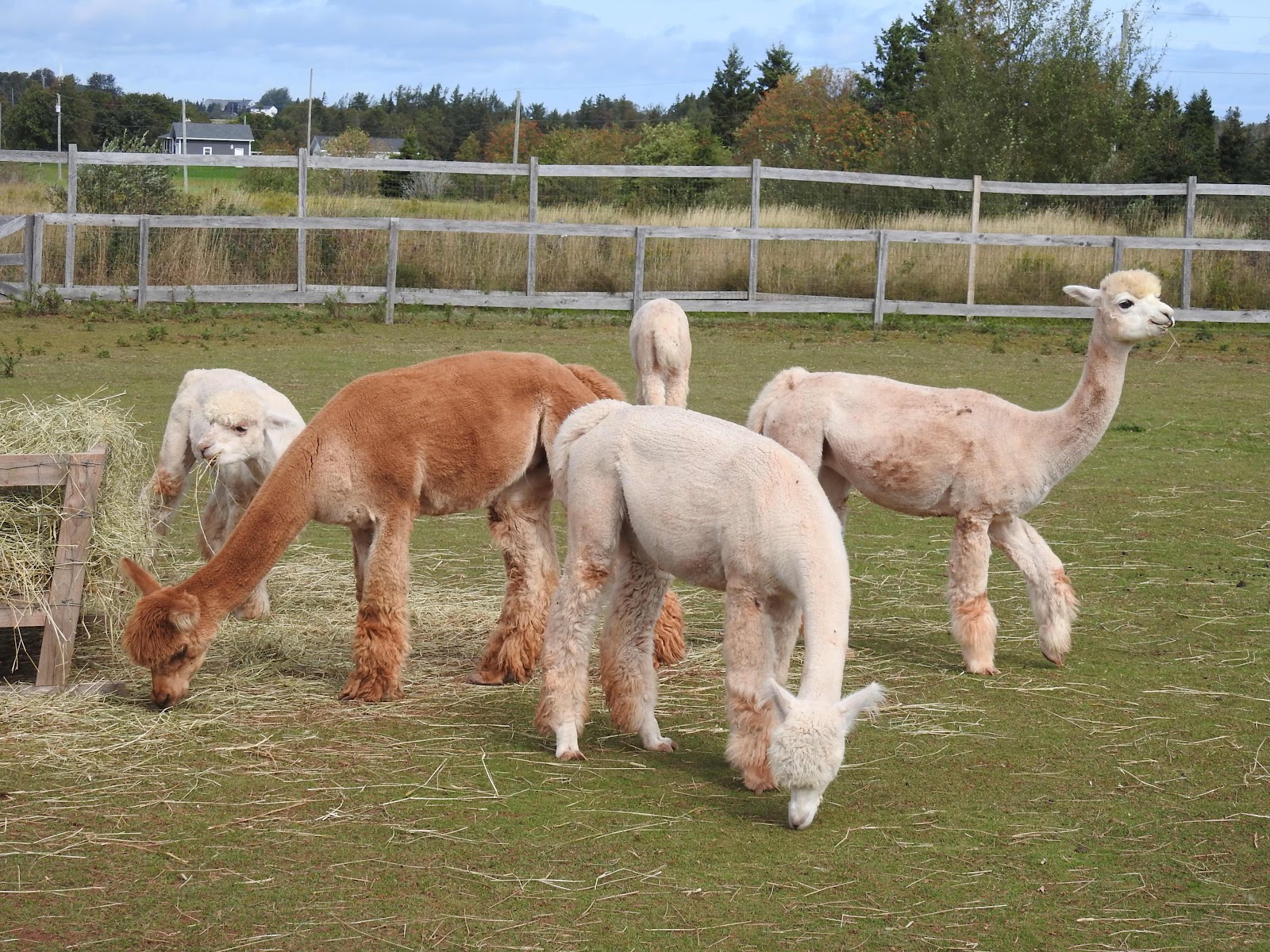 The farm had three baby alpacas this year. The little ones were in an enclosure with their mothers and a few others. One approached its mother to nurse and was rebuffed. The little animal was persistent however and eventually the mother relented. 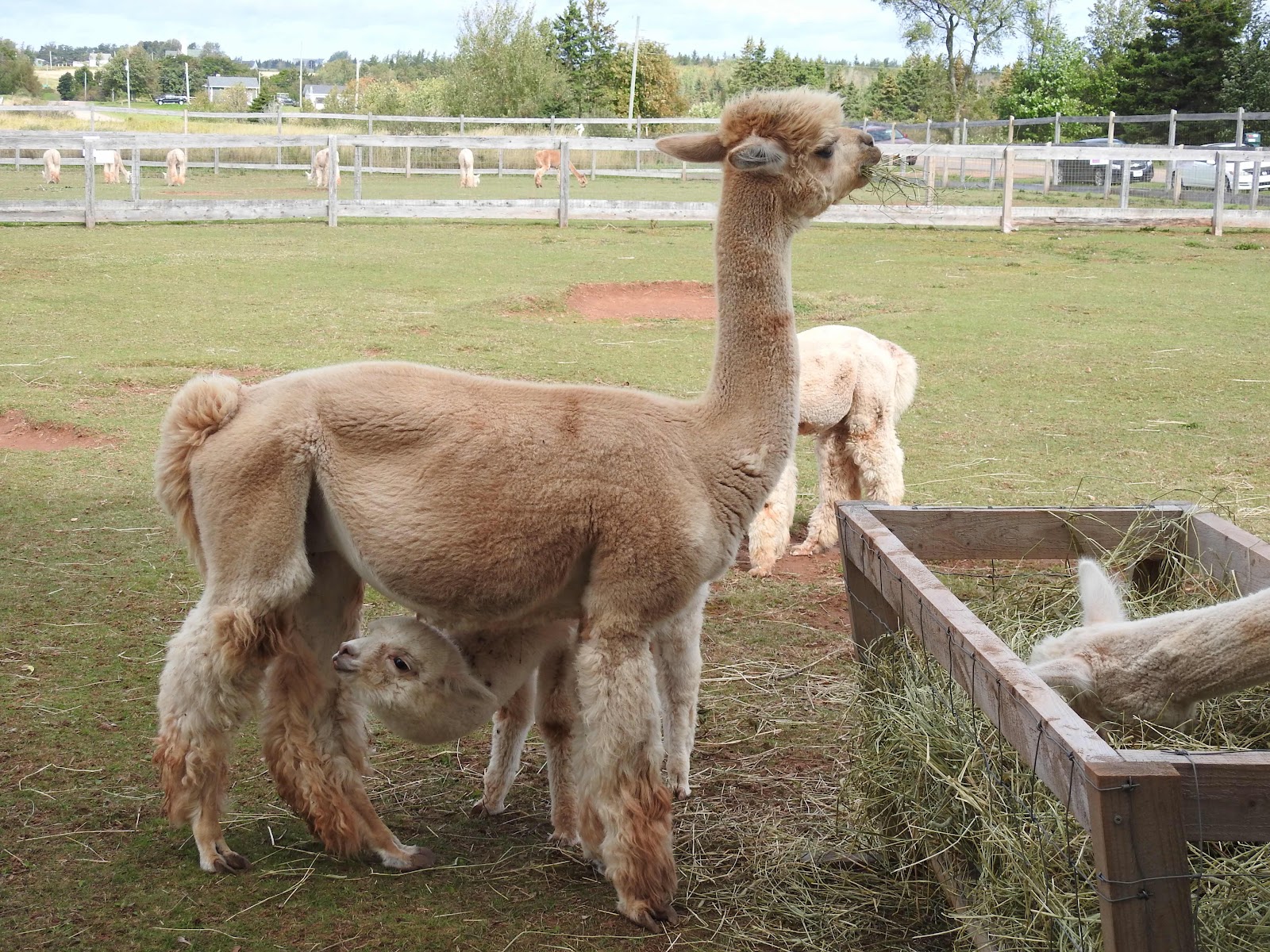 It was shy afterwards and looked out over its mother’s back at the crowd. 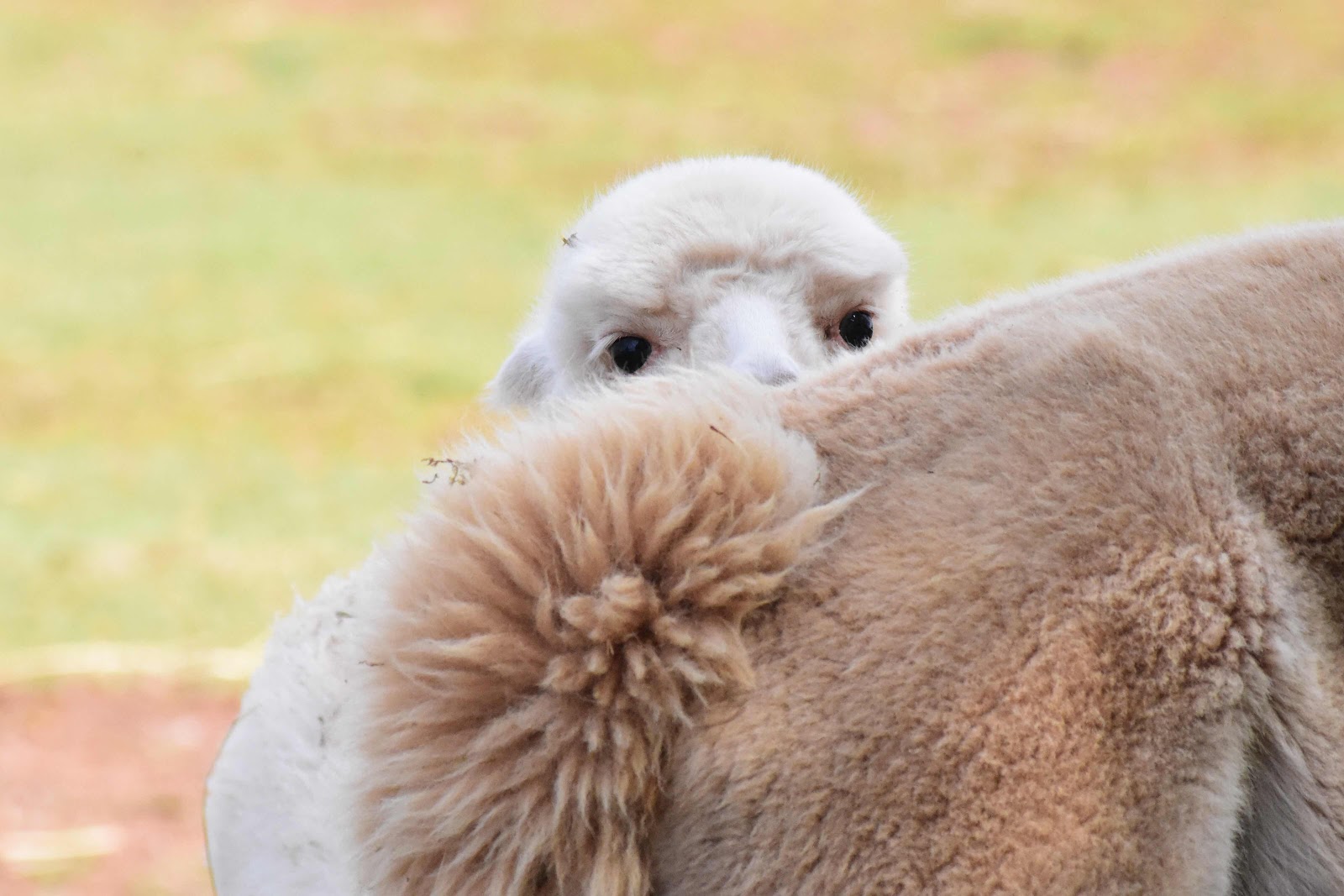 Another little one was tired and lay down in the yard and fell asleep. The others ignored it and it slept in spite of the admirers looking on. 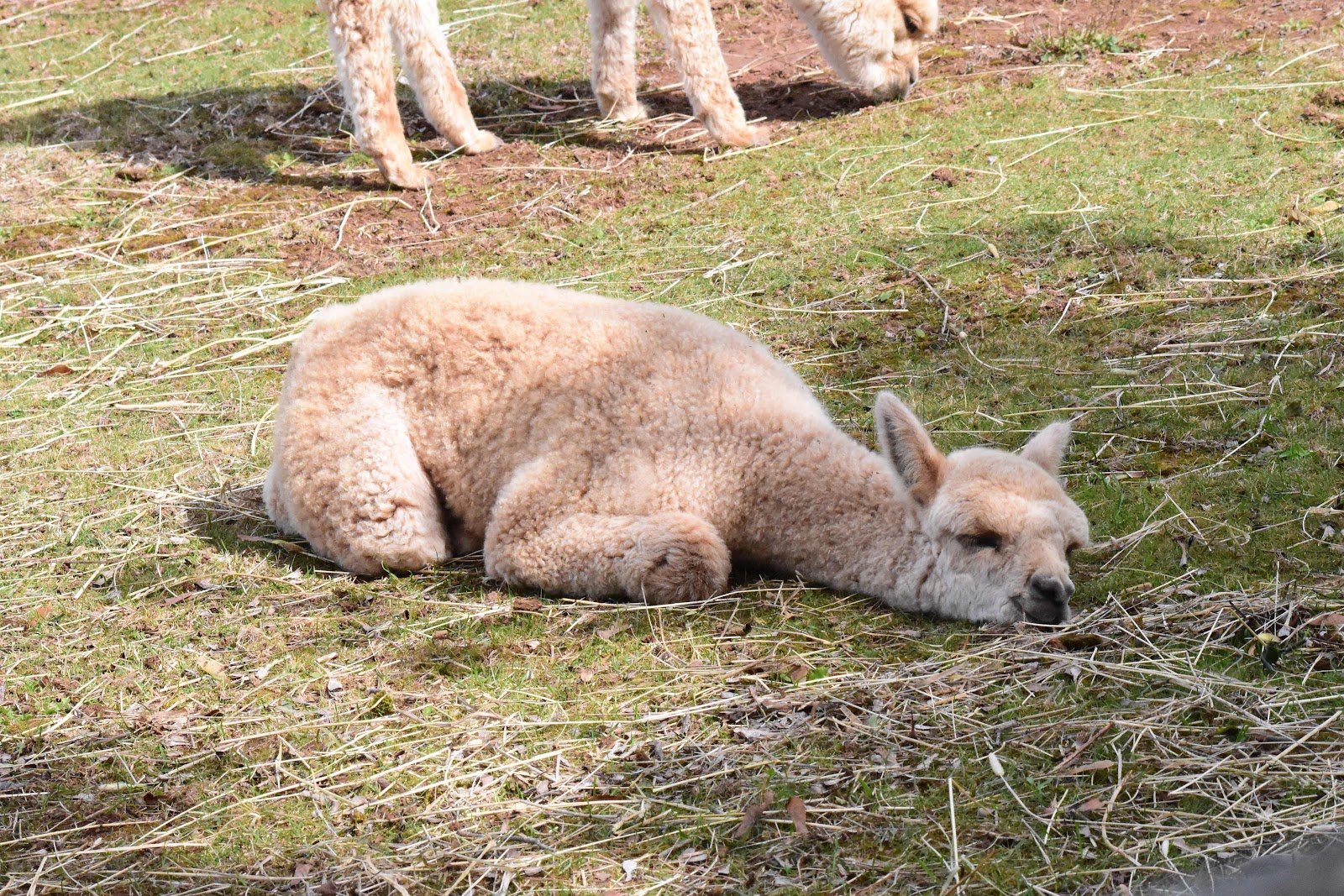 There are several colours of alpacas in the flock of thirty-six animals and shearing had been completed by Farm Day. 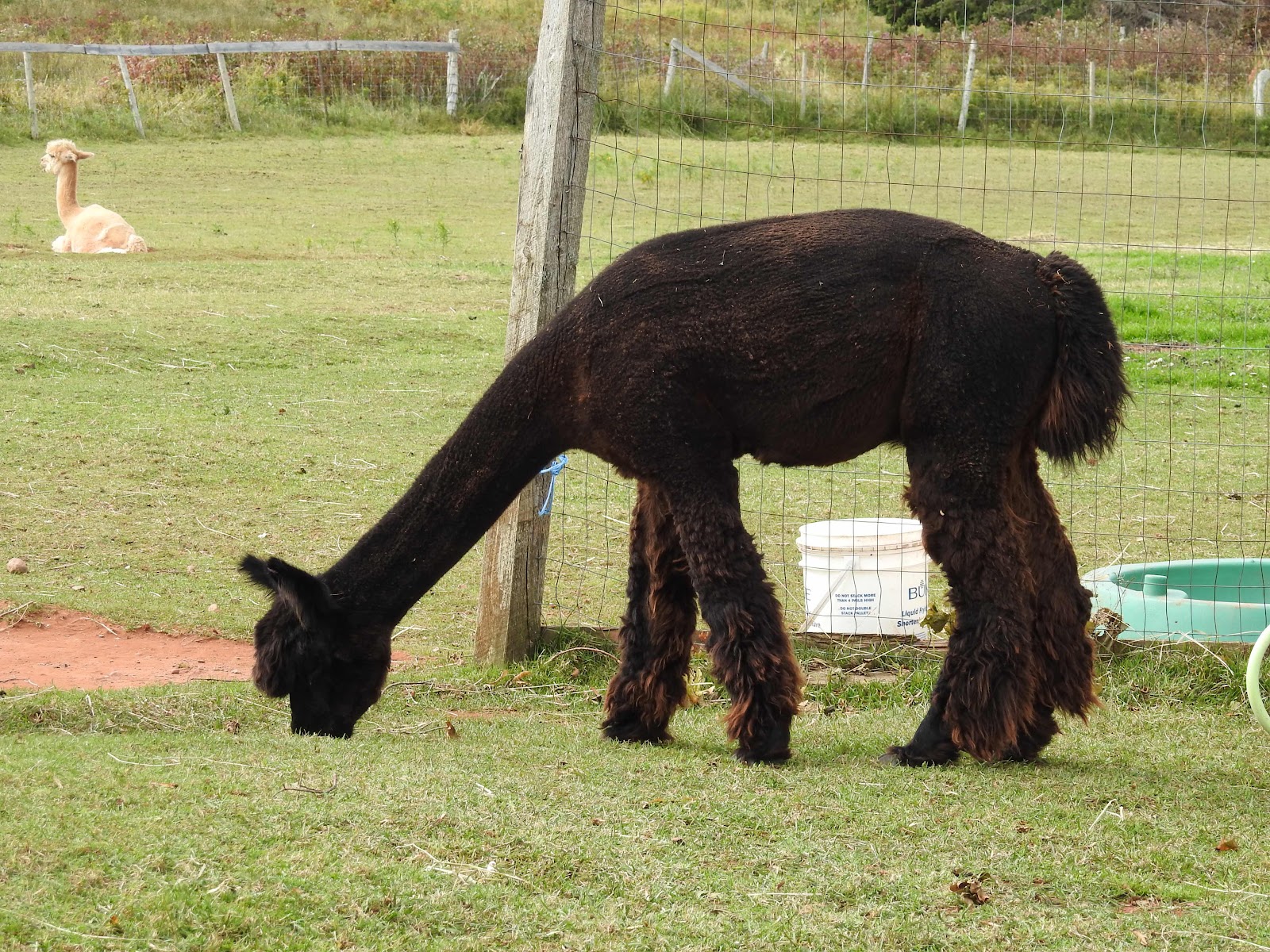 Their legs aren’t sheared so they look fluffy. They have pretty faces, at least to this observer and their eyelashes would make anyone who enjoys mascara application drool. 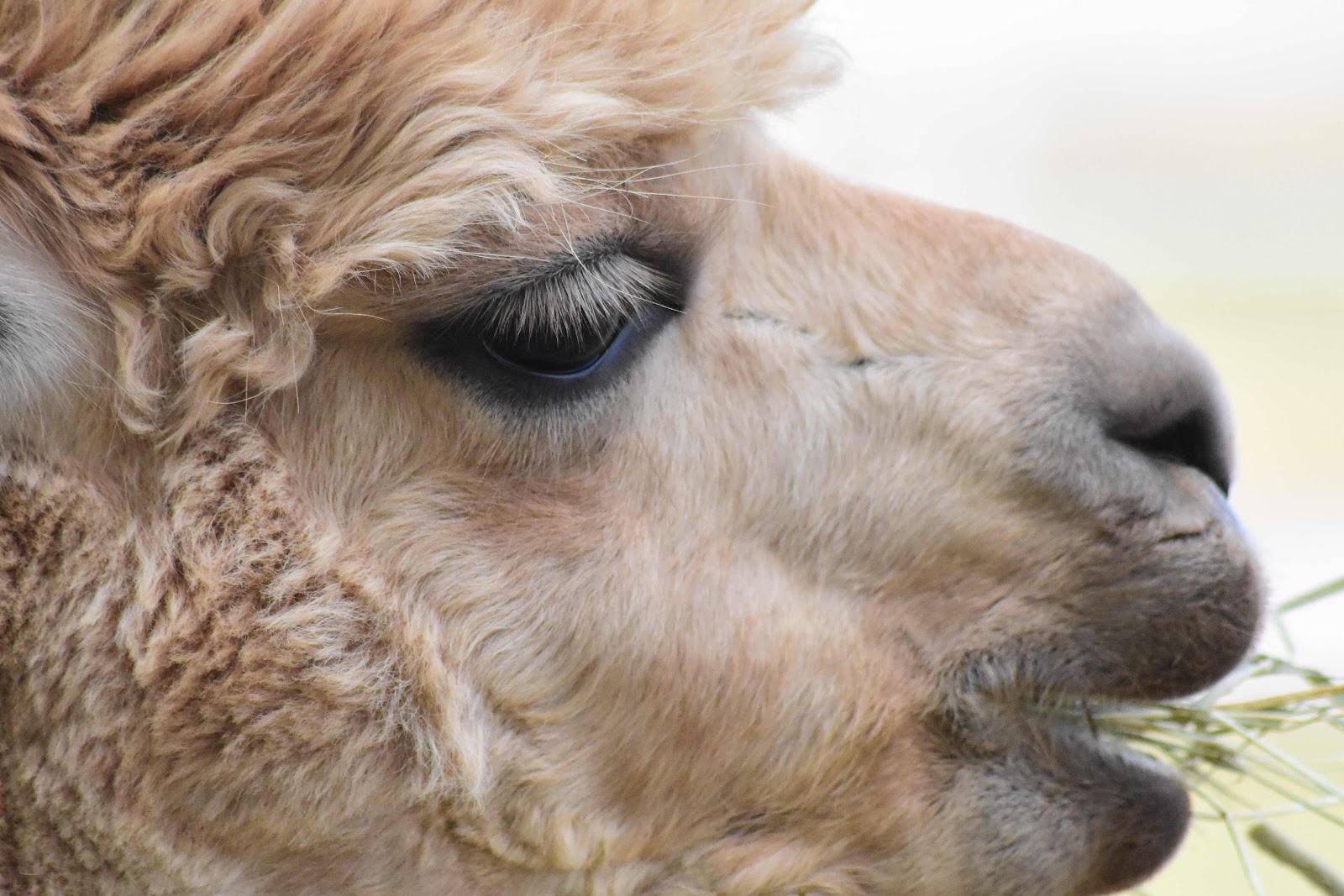 The farm has a store on the premises which sells alpaca yarn and knit products such as socks and sweaters.

Griswald, the llama, is also on the premises. 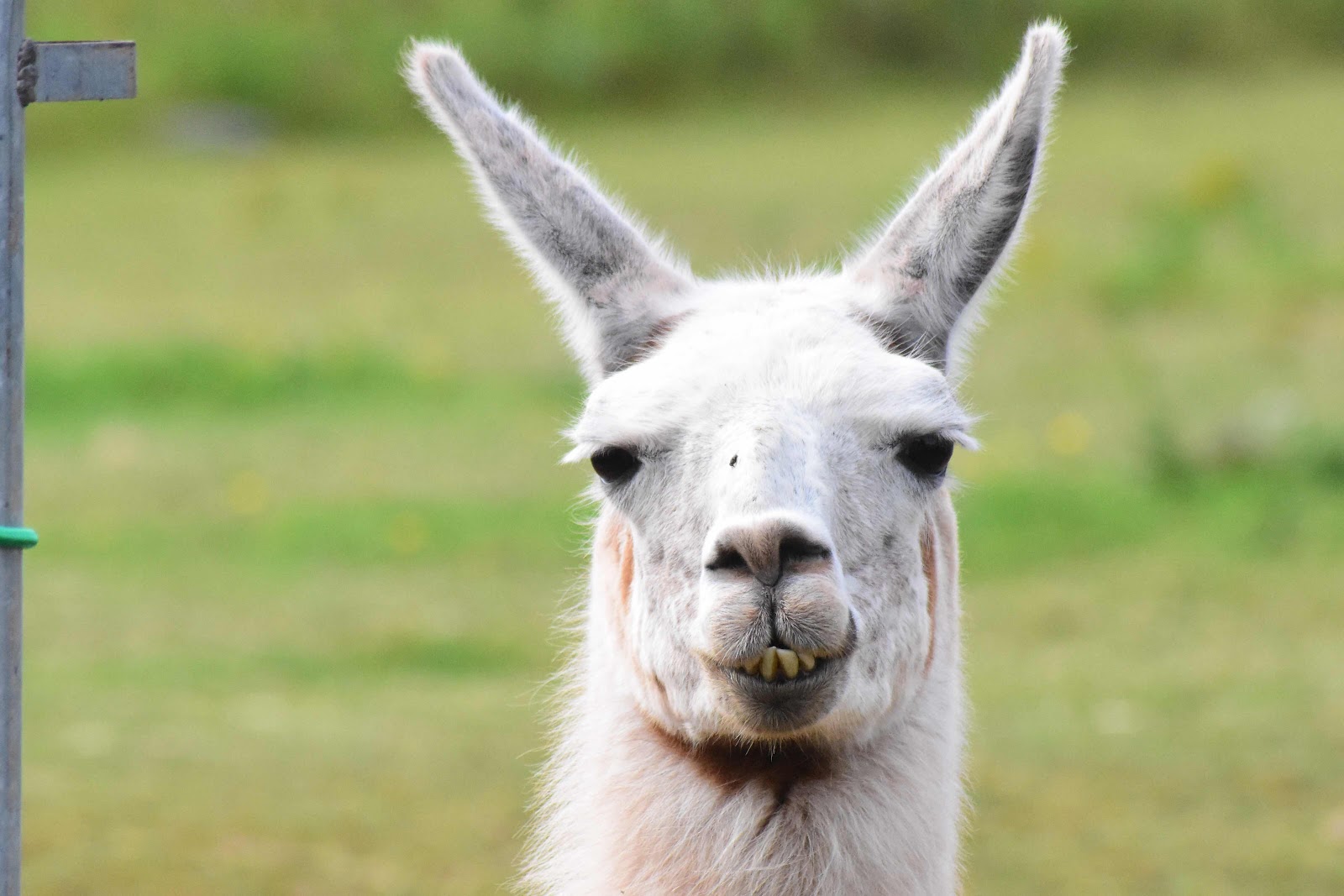 So much bigger than the alpacas, llamas are usually domesticated as pack animals or for meat in the Andes. Griswald allowed visitors, including one of our granddaughters, to feed him pieces of apple supplied by his owner. 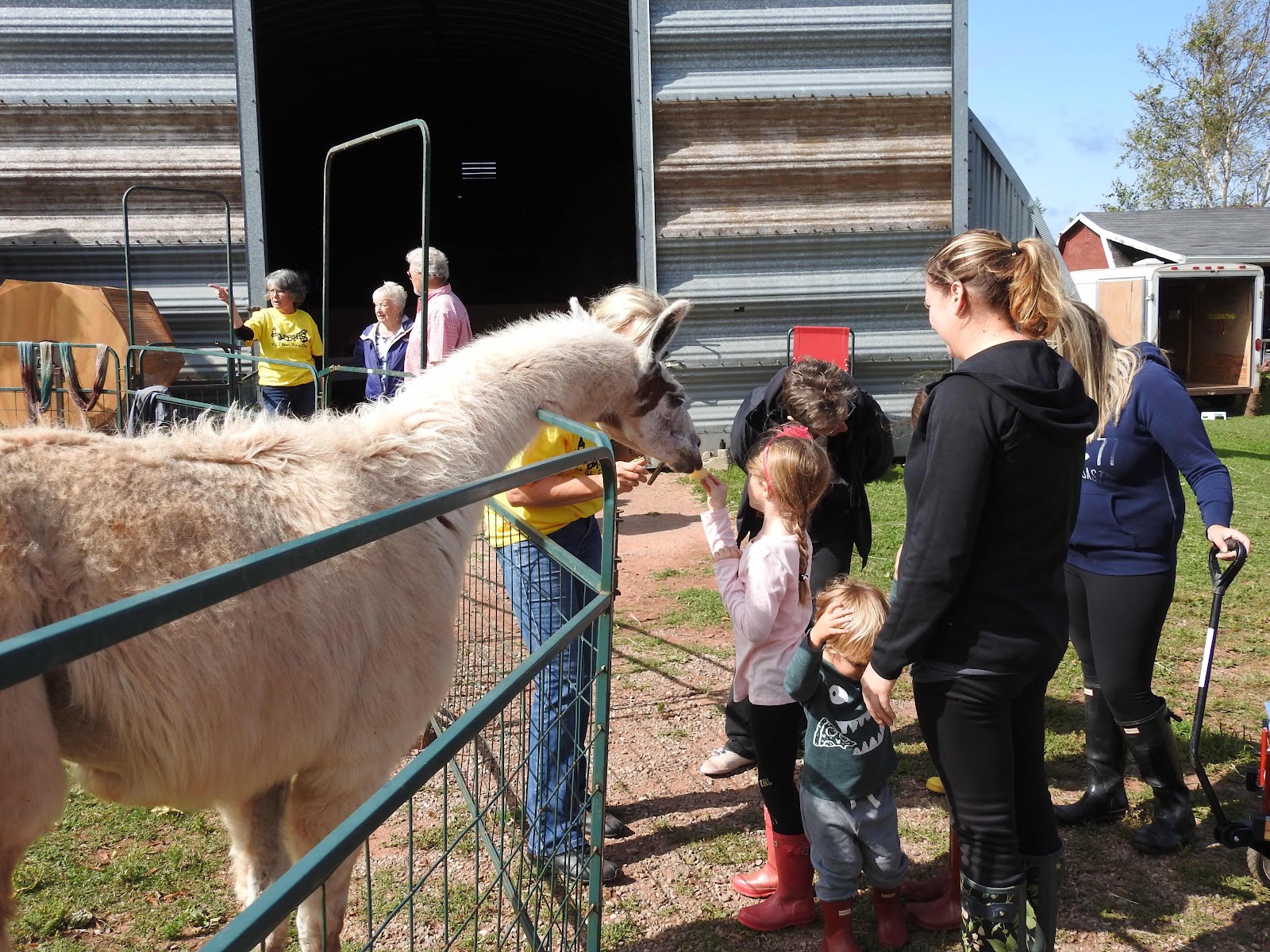 A young teenager was friendly and answered any questions people had. He was an excellent ambassador for the farm. We will visit again.

Posted by Marie Smith at 15:45
Email ThisBlogThis!Share to TwitterShare to FacebookShare to Pinterest
Labels: alpaca

Such sweet looking creatures. I love your pictures, and it shows how gentle they seem. I wonder if they really are like that. Thank you, Marie. :-)

Funny looking creatures really! There's an alpaca farm near here too, and at the end of the month they will be showing their animals at the local Fall Fair. And there will be yarn and knitted garments for sale, such lovely soft wool. I think I might buy an alpaca hat for the winter. (for me, not the alpaca!!!! heheh)

The alpacas are so cute. I love all the critters. Wonderful post and photos.
I would like to visit these farms too. Enjoy your day, wishing you a happy weekend.

I hear that llamas can be quite bad tempered. I hope alpacas are sweeter in nature. They all look like they're wearing leg warmers, LOL. What is this, the 80s?

The alpacas are adorable with their furry legs Marie, lovely series of photos 💙

I think llamas have such beautiful eyes...I know our granddaughter would enjoy a visit there.

What a beautiful series of photos. It must have been a very rewarding visit to get up close and see these beautiful creatures.
Thanks for sharing and have a wonderful weekend.

They always look like a child's drawing of an animal to me; they have all the bits you'd expect but somehow the proportions are all wrong. I'm sure they're lovely animals if you get to know them!

Theu are so fun to look at, love them!☺

Only yesterday my partner and I were saying that we MUST go to the next alpaca open day.
Huge thanks for this reminder. They are such beautiful beasts. And yes, those eyelashes are spectacular.

Aww, the alpacas are adorable :)

So much fun! Alpacas have such nice faces. They look like they would be fun to be around.

What fun for the girls.

oh this sounds just like "my" alpaca farm!!! they also have farm days, 2 weekends from now!! i love the alpaca, the farm i visit only had 2 babies this year, they usually have more!!

AND the farm i visit, and where i learned to knit, also has a store, they have beautiful products and yarn for sale!!

Looks like a great place. The animals are so fun to see. There were llamas on a farm down the road from me for a while a few years ago, but I haven't seen them in a long time. I've always missed them since then.

It's obvious that Griswold considers himself to be "Top Dog" … er, I mean "Top Llama"

Wonderful creatures, I am sure that the kids had a lot of fun.

I love the sleepy looking one.

such cute looking creatures dear Marie :)
i loved them ,never saw around though
i bet children had so much fun :)
you told everything so nicely

Very cute pictures! The llama picture reminded me of being a teenager. My best friend at the time lived on a llama farm with her aunt and uncle. I spent more than a few hours helping to corral runaway llamas.

I would feel happy to visit all the farms as well!!