The run and the pond

The lobster boats approached the port from the various fishing grounds. 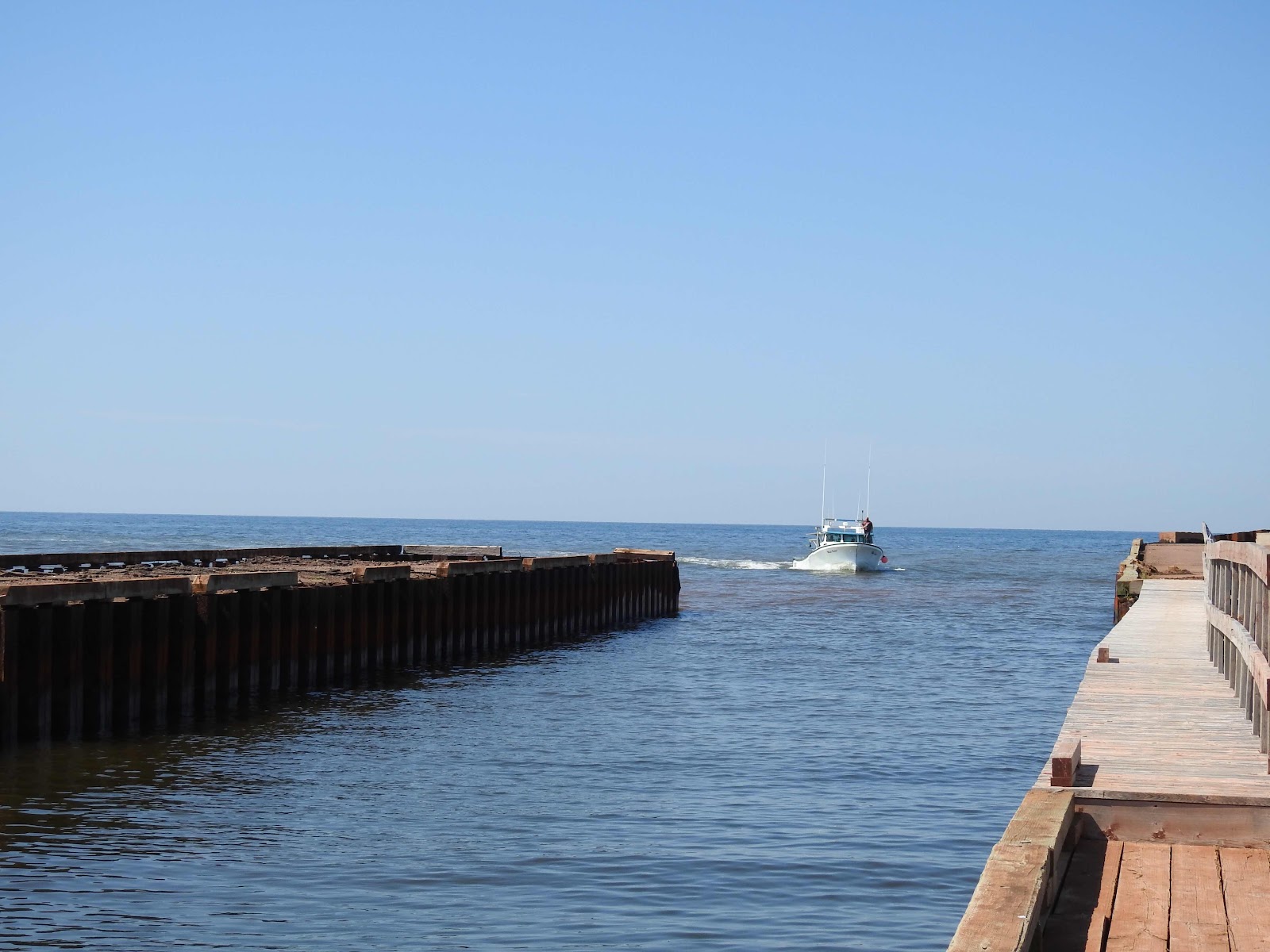 They slowed as they approached the run which led into the boat pond, a sheltered area. Boats lined up in the run waiting their turn with the buyer in the refrigerator truck who was ready to weigh the lobster and take it to market. 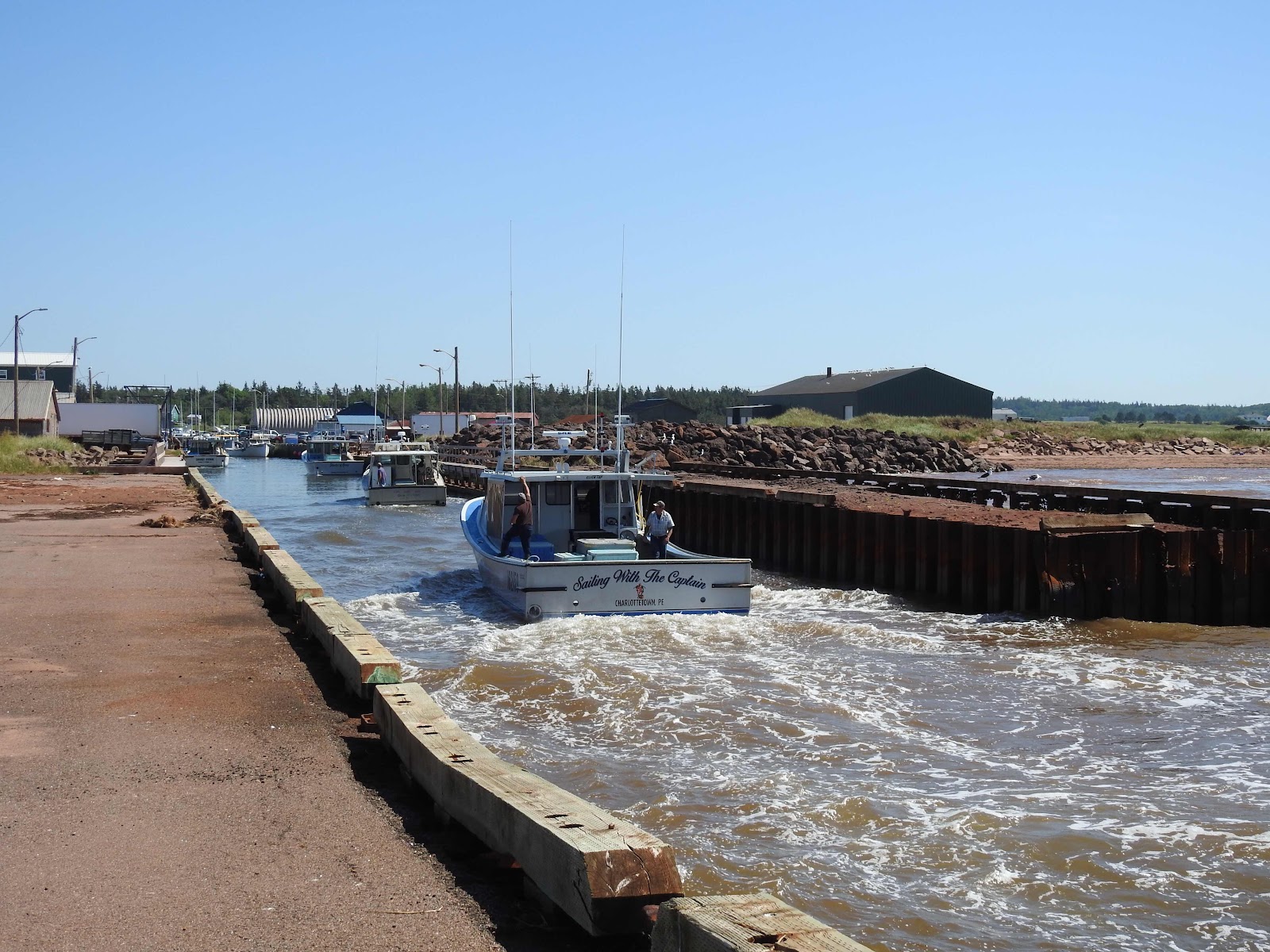 Along the run, people watched as the fishers waited their turn with the buyer. Feathered spectators included huge seagulls who looked like they benefitted from the catch as well. 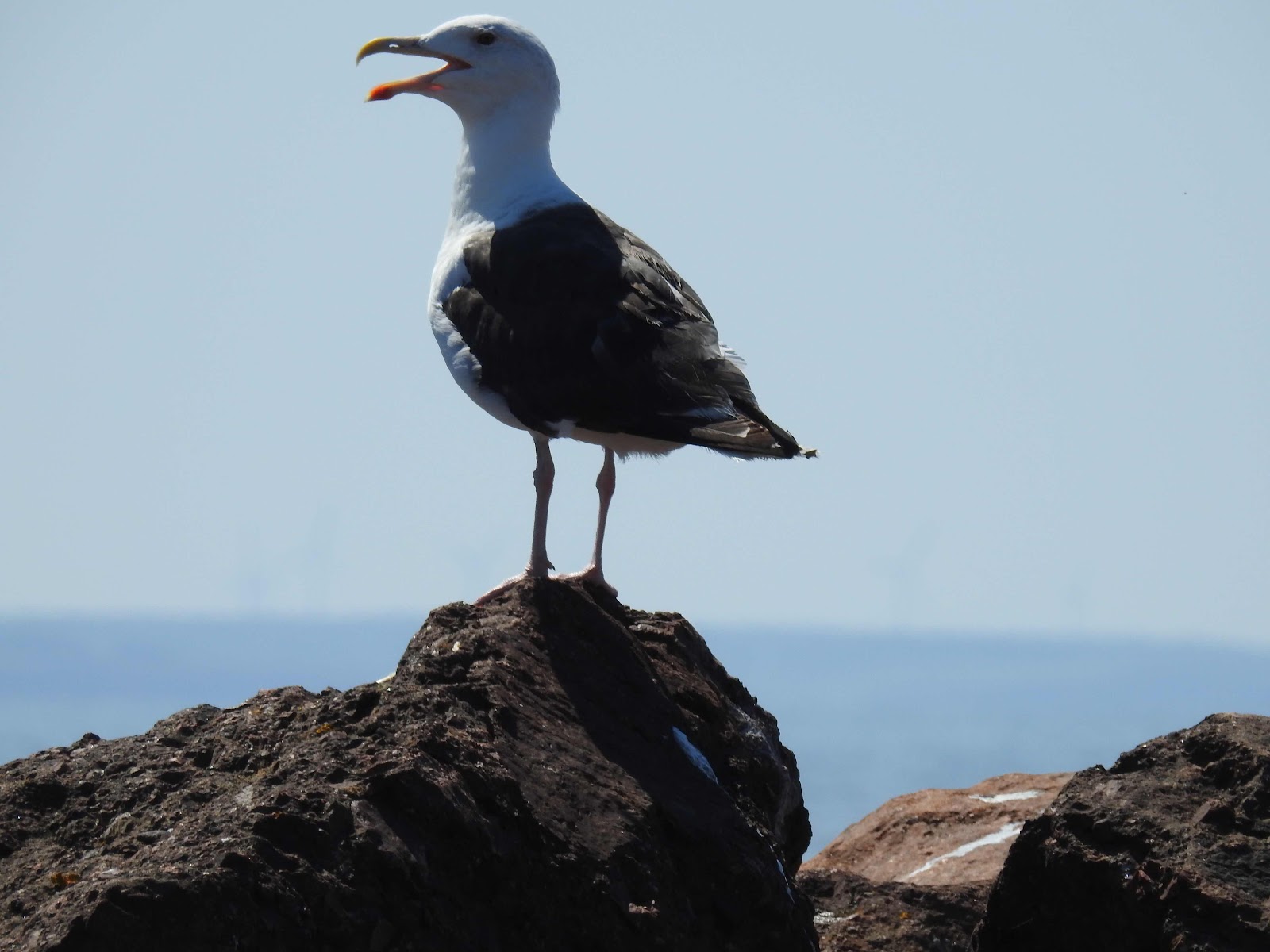 They eyed the activity with practised patience, knowing that eventually some fishers would drop offal overboard for them.

Between arrivals, my husband and I walked along the run and around the boat pond. This workplace is busy as the sign indicates. 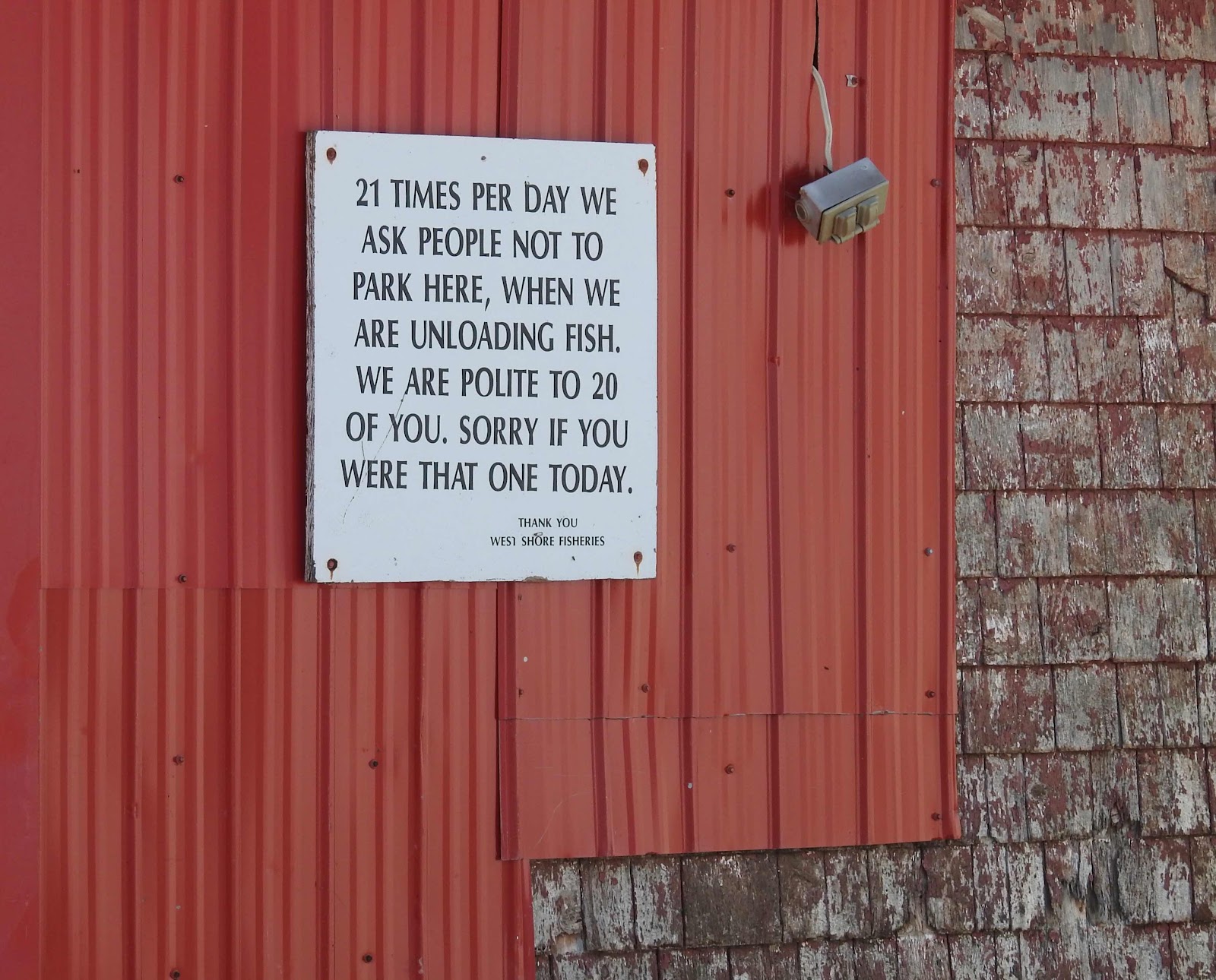 Nets from the crab fishery are stored while lobster is pursued. 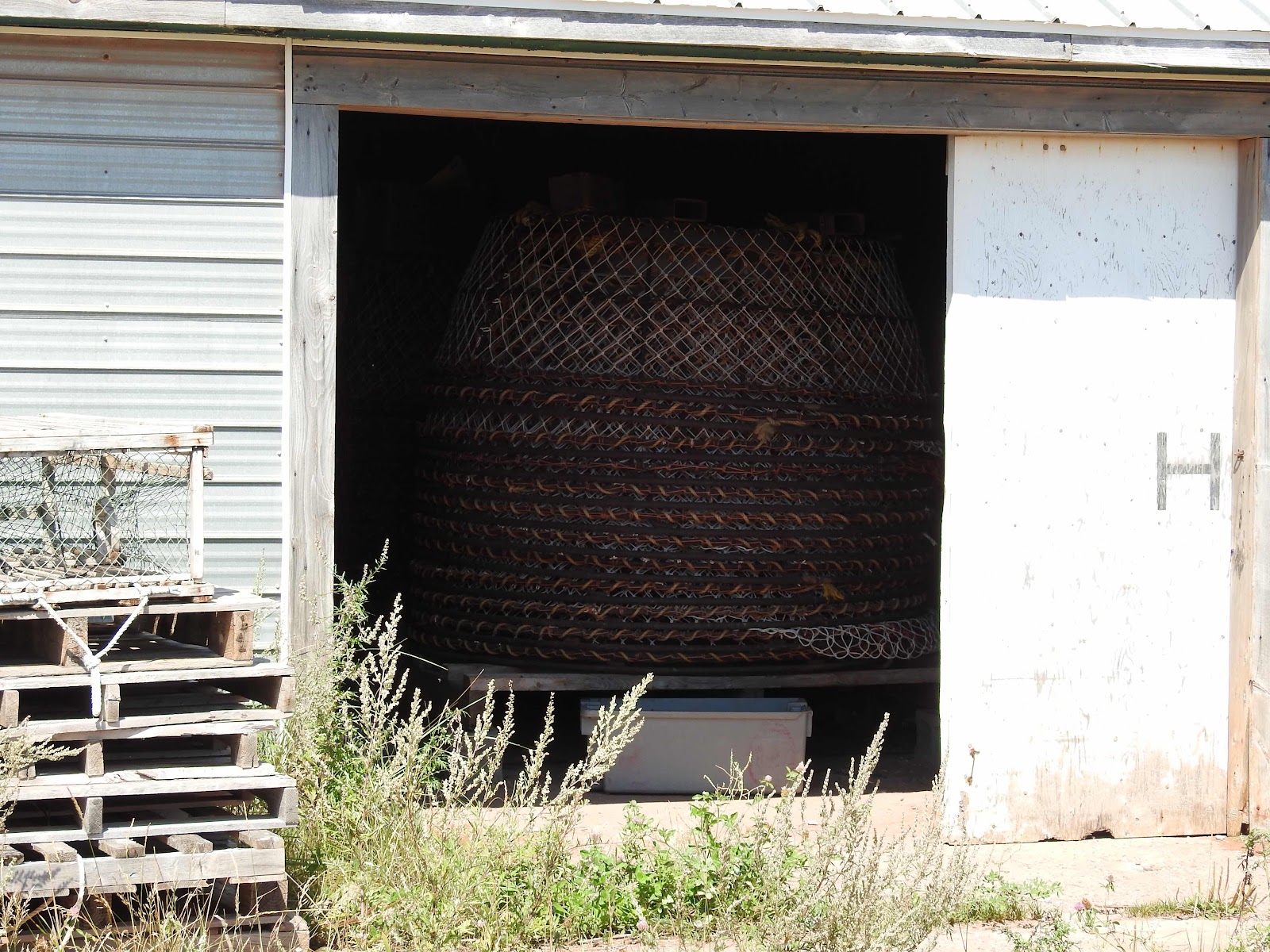 We walked over the trail to the beach which stretches along both sides of the pond beyond the dunes. Few people were there this morning. The focus is on the work and it will be for the remainder of the season.

What a lovely way to spend time Marie.. I wouldn't mind bringing along a deck chair, a flask of coffee and just watch the proceedings ☺ Happy weekend to you both ✨

I know you will be enjoying lobster again soon. I have learned so much about fishing for lobster and crab from your posts, Marie. And about PEI. :-)

Ohh Lobsters are so expensive here in ND. That is the problem being landlocked. It must be fascinating to see the boats coming in. I would surely love to see. Thanks for sharing this.

LOVE that sign.
And your window into a world I will not see. Thank you.

Ah, wonderful work....I could watch it all day long!

That is a different world from where I live. It is fascinating.

I'm amazed at how narrow the run is. Wonderful pictures,.

Great report on everday life in PEI. I could sit and watch the activity all day too. That's one of the reasons I try to get to our pier every morning. They are the only people up and working in town at 9ish in the morning. The town doesn't function until 10.
Have a wonderful weekend, Marie.

It's interesting and fun to see an authentic working area like this with a fresh catch being brought in.

A world apart from me. Even "work" has become foreign.

I would love to be there to watch the goings on...

your walks are always intriguing and fascinating dear Marie

bird image is lovely
happy lovely days to you my friend!

Grear sign😉 I love those photos, how I wish to get by the water anytime soon☺

That's a great sign, I must remember not to park there if I ever come to visit! And stay safe today, bad weather is coming.

My fingers are crossed for you all Marie as Dorian heads your way. The lobster info was interesting but I backed up to your other post and I love the lighthouse and had no idea that Cicadas were so large. They certainly can make noise but I've never actually seen one.

Thinking of you at this stormy time Marie, thank goodness you aren't getting the full brunt of the storm ✨

Lobsters are yummy. Love the scenes and views, great shot of the gull! Have a happy day and a great new week!

Love these shots of the everyday work of the lobster fishing.
I especially like that sign...don't be the 21st !!
Lobster is a real favorite of mine.

oooooh that sign, now that's a good one!! love me some lobster, i had lobster sliders yesterday and they were so good!!!

as i glance up...i see everyone loved the sign!!!