Autumn along the Confederation Trail

A walk along the Confederation Trail not far from home last week was a pleasant surprise. Some of the colour remains on the trees there, unlike many areas we’ve visited recently. It was a colourful trek with a favourite sight through the trees.

This trail was the railbed when trains ran across the Prince Edward Island. Now the trail is frequented by bikers, runners and walkers. It passes through the countryside, past fields, over rivers and streams, through towns and villages and the two cities on the island. It is flat and straight in many areas as it is in the area we visited. One can see for kilometres into the distance. 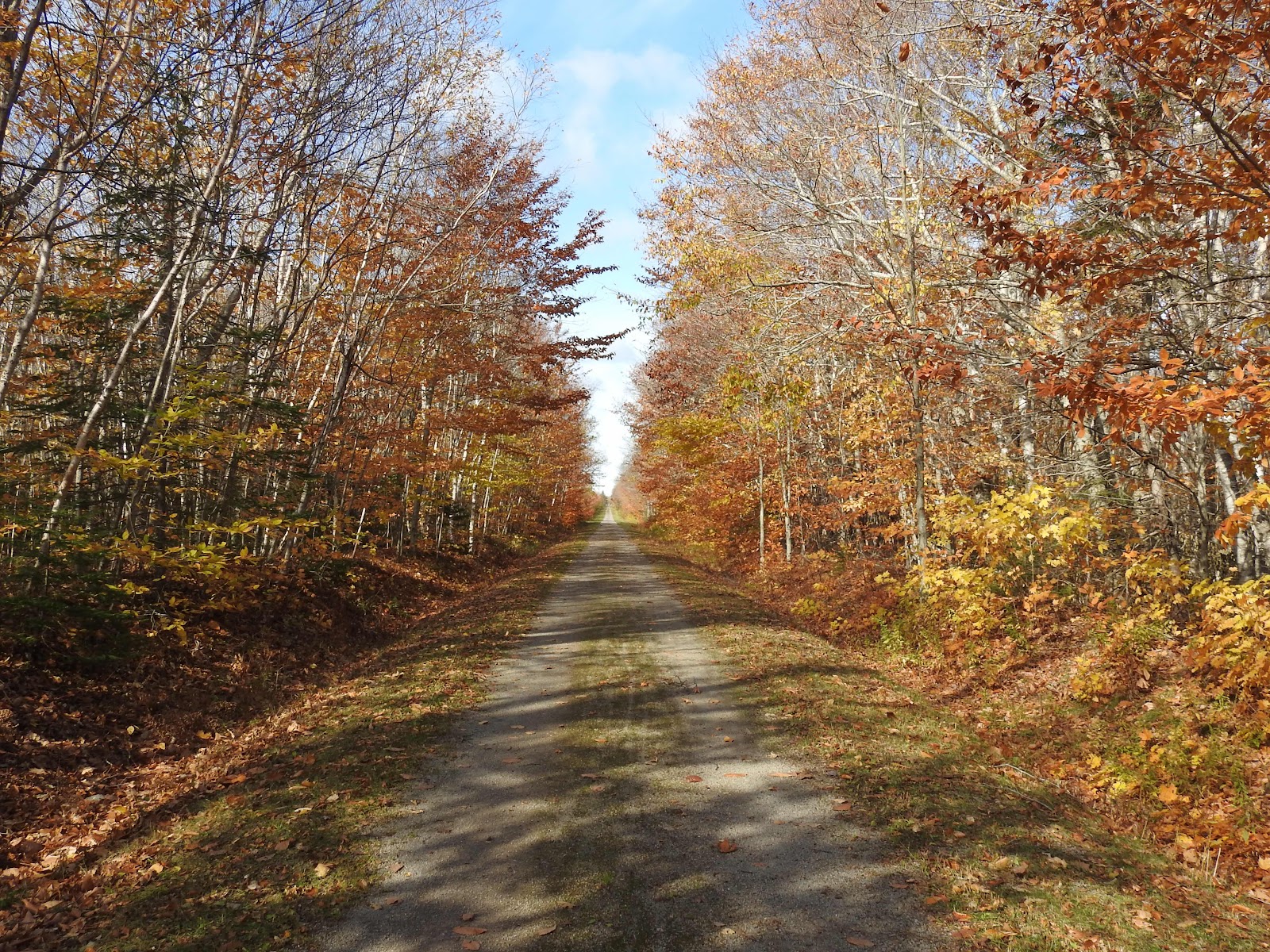 The first portion of the trial has power lines on the south side. There are more leaves on that side because the trees have been trimmed due to the power lines. Trimmed trees sprout multiple branches and the leaves become thick over time and are somewhat protected from the wind, providing an autumn spectacle. 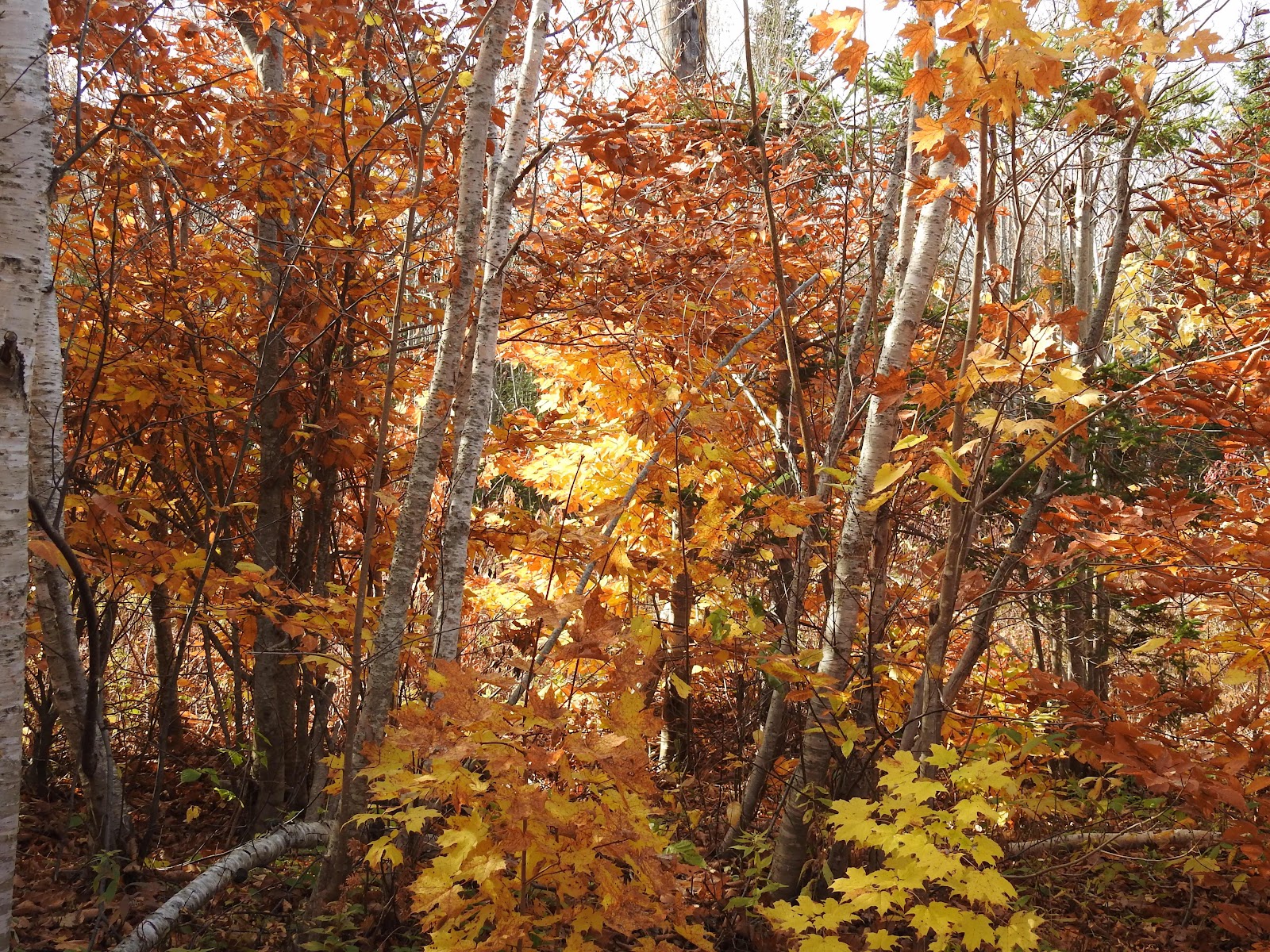 The fields on either side of the trail grew hay or straw this year. 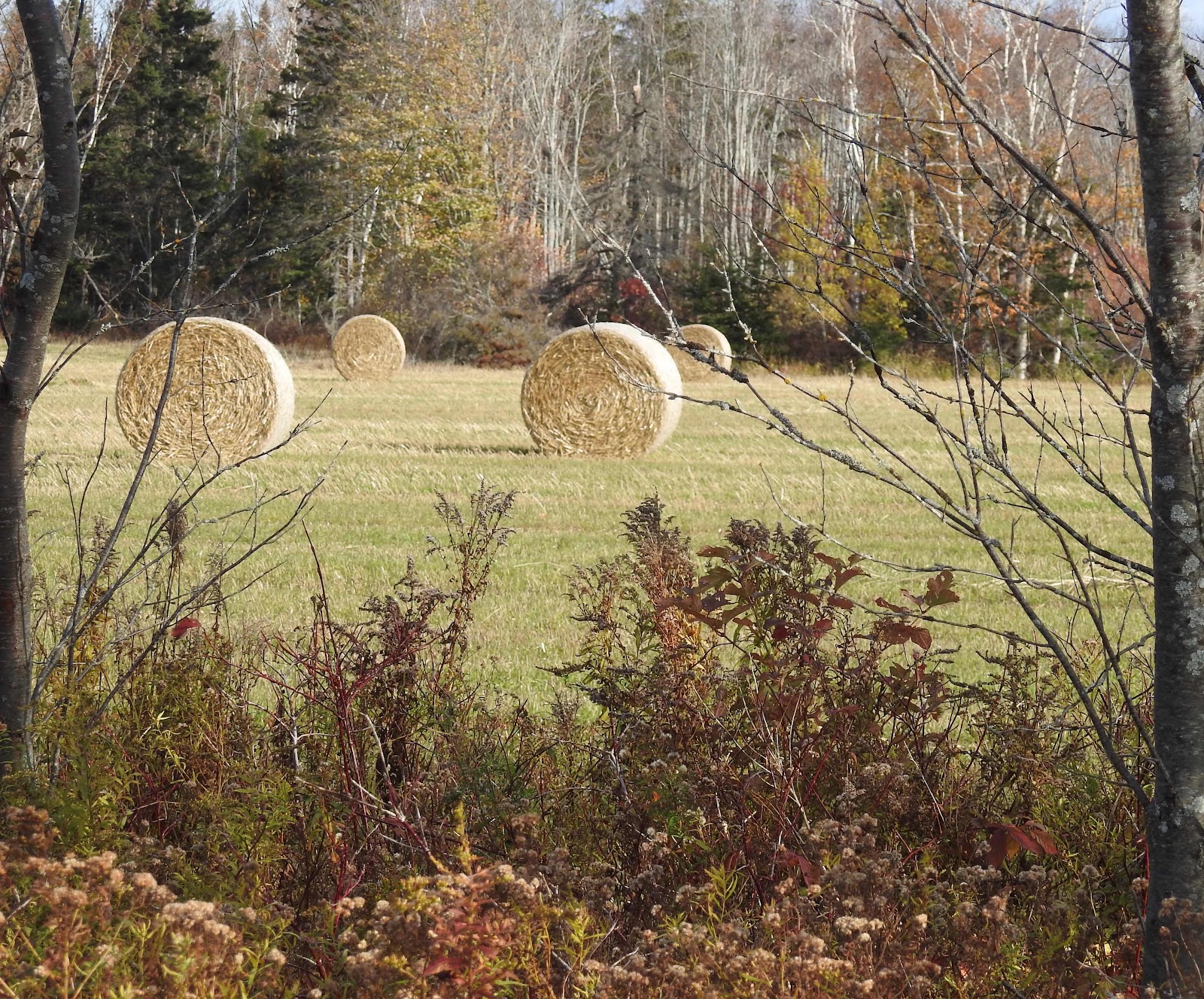 Some of my favourite autumn scenes include bales of hay and trees frame the scenes along this part of the trail. 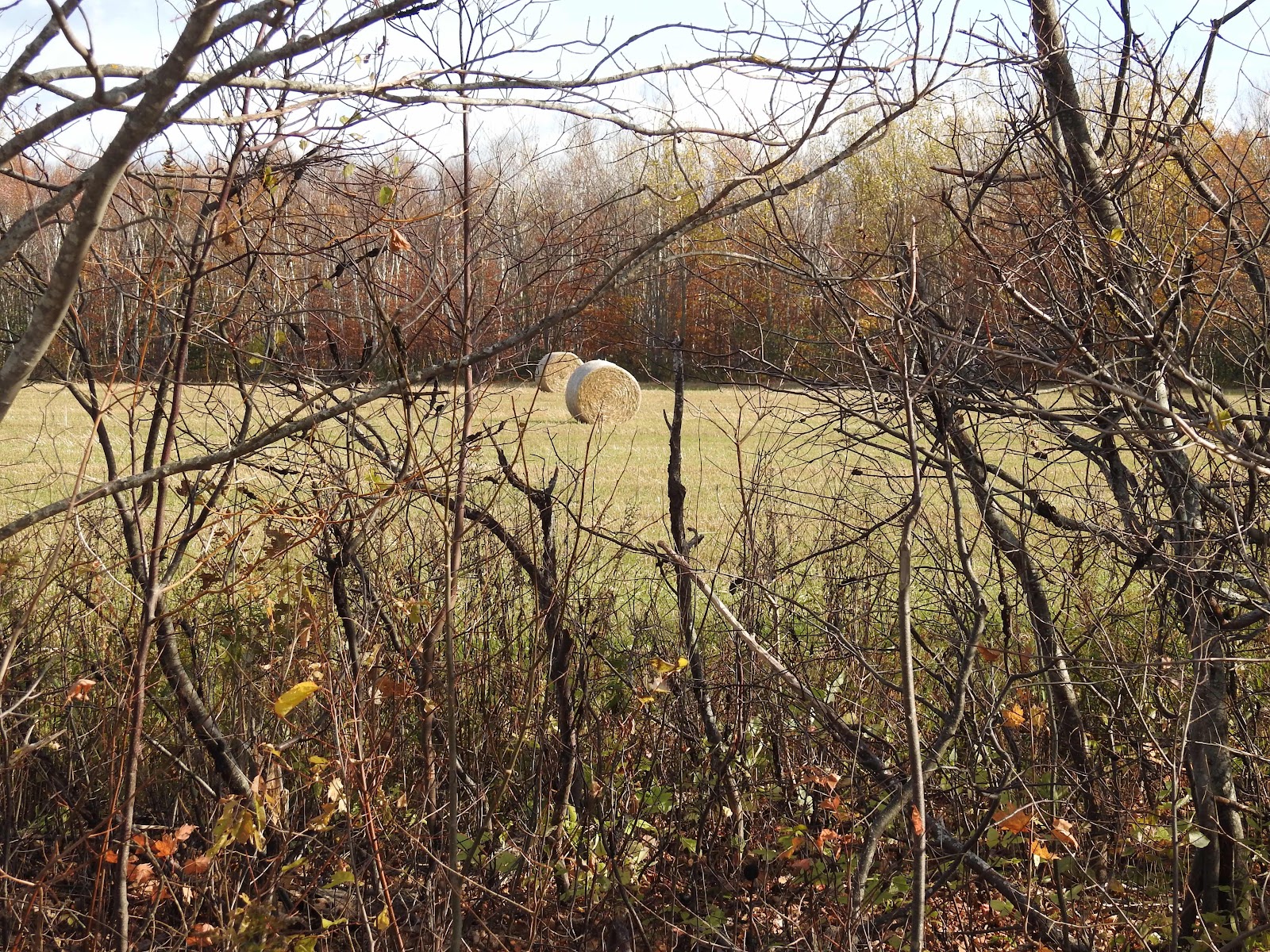 The shape of the bales, circular against the backdrop of trees, sea or sky are a contrast to other natural elements. 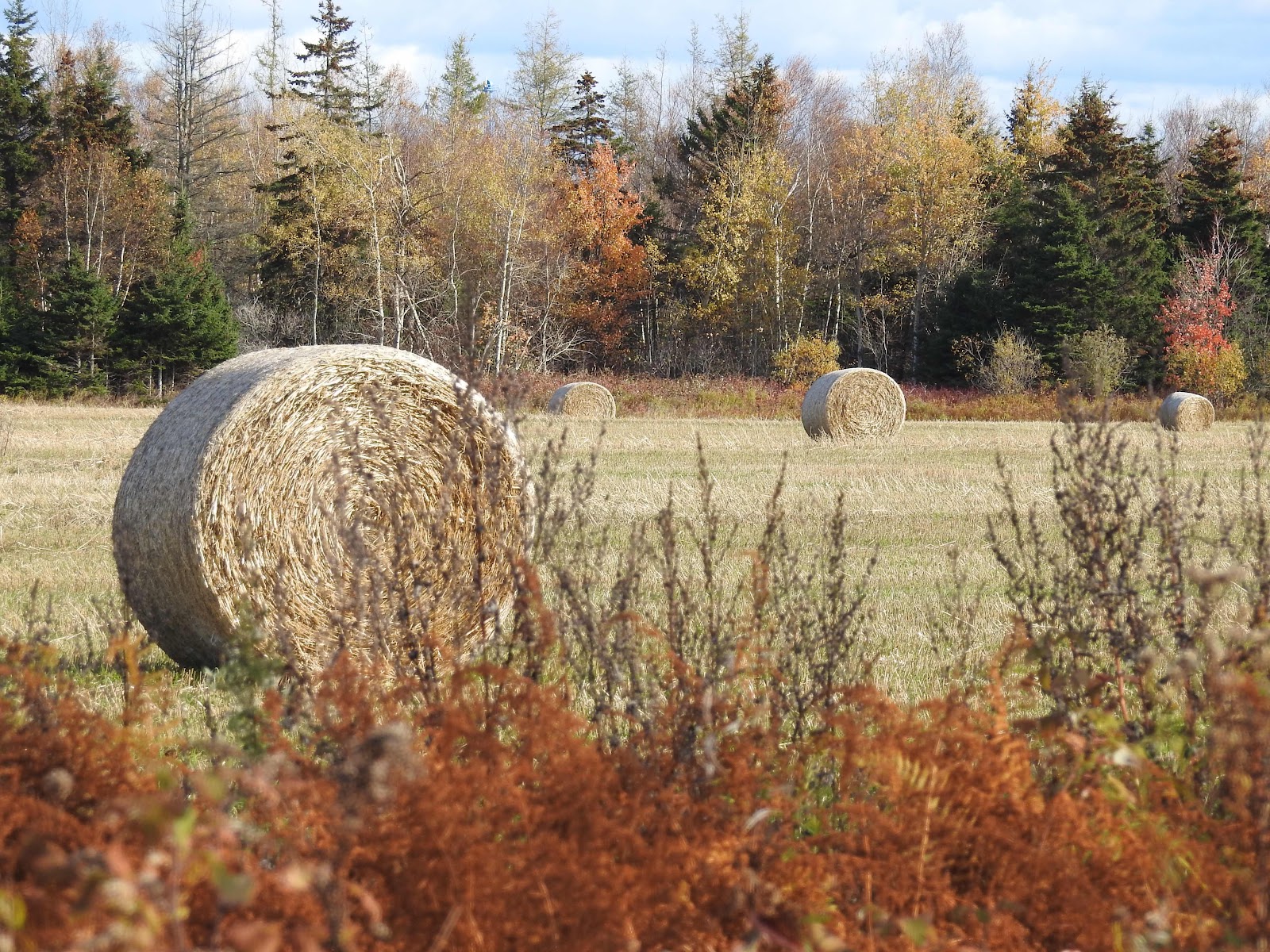 The forest floor is covered with leaves which crunch underfoot. 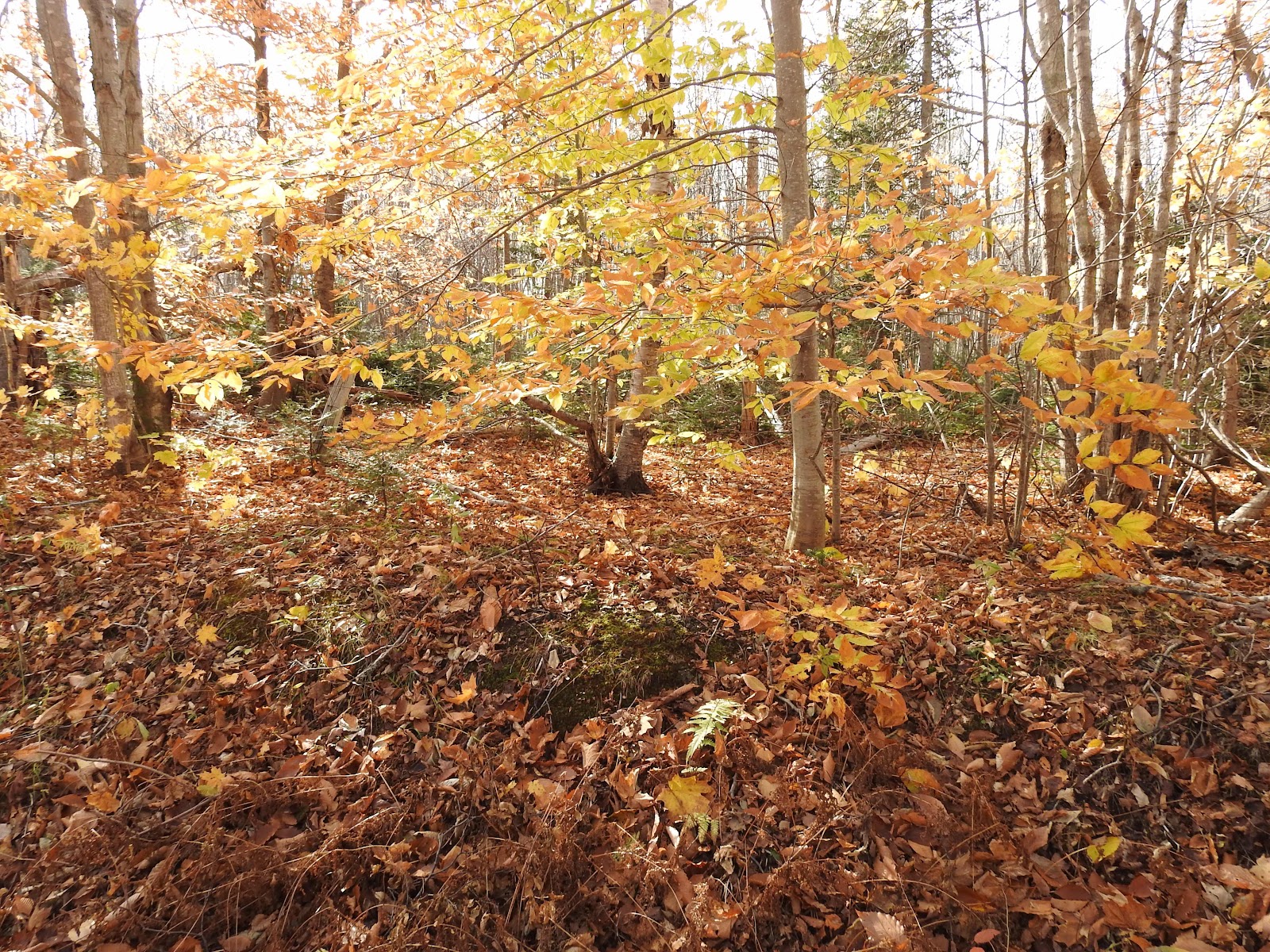 Consequently the rich red soil is under another layer of leaves which will be broken down by microorganisms providing more humus to the soil. The cycle of life continues.

Many of our favorite trails were once railroad beds. In some places, you can still see old ties that have not yet quite rotted away. Love the pretty colors, Marie. :-)

What a lovely walk. The railroad bed would be nice to walk with its lack of steep grades. Nice color show too.

Oh, how beautiful.
Thank you so much for taking us along.

Walking through such gorgeous colour must be amazing. Your photos are incredible, and I really love your last photo of the hay bales. When I grew up farmers only had small rectangular bales; now most of them have these large round bales. Much easier nowadays with all the machinery to handle them.

We have some railroad trails that were created in the last few years. In many places the rails were still there but in others they were taken out. It's a very popular trail to walk. We haven't gone yet but have seen photos and read info on it.
Lovely photos, Marie and have a wonderful weekend.

I so appreciate every note you leave me. I hope the shadow they saw wasn't of any importance.

This is beautiful countryside.

Gorgeous 💛🍁 you live in a very beautiful part of the world Marie and it is such a privilege to see via your wonderful images, merci beaucoup and happy weekend ✨

These are spectacular scenes. I would love to walk down that road and just saver the surroundings.

I so wish they would turn some old rail beds into trails here. I love this one you show...I love bales of hay.

Hello Marie
That's a track I'd love to wander - changing with each season- spectacular in Autumn. The fact it has 'level' stretches would make it particularly appealing.
Thanks for taking us along. Any snow yet??

The colours are looking wonderful. We have quite a few trails like that and while they provide good easy walking I somehow miss the surprises revealed when there are corners and deviations in the route.

Glad you had sort of a last hurrah

These are beautiful pictures! I can imagine myself scrolling along that path for hours... and then hoping to get a ride back...

so pretty marie, a great path to walk on. i had not thought about the consequences of power lines. that makes sense! the first and second image are packed with fall color, and i love them but seeing the bales of hay is also a favorite for me!!

What a great place to walk, surprised to see so much color left, but nice you could enjoy it. Rails to trails have done such a nice job of providing places to walk, run, or bike from old no longer used rail beds.

A beautiful walking trail, Marie. We have some trails that were built on old railroad lines as well. Lovely photos.

The trails and forest are beautiful. If it weren't for the snow I'd think about moving there!

Gorgeous photos and fall colors! That trail looks like a wonderful place to hike.

what an exquisite images dear Marie
i can almost step in this soul filling sight :)
how sad that trees had to be short for power lines

i always wonder as if any place under our feet was not a graveyard before as millions and millions of people have come and died so where are there remnants ?
microorganisms know better probably