Our most recent visit to the Westmoreland River Nature Park in central Prince Edward Island was on a mild, calm day last week. The day before we’d had torrential rain and it may have been the reason the water was so muddy. However, though the area was settled into autumn, some of the flowers and animals, like us, were holding on to the last bit of warmth autumn has to offer. 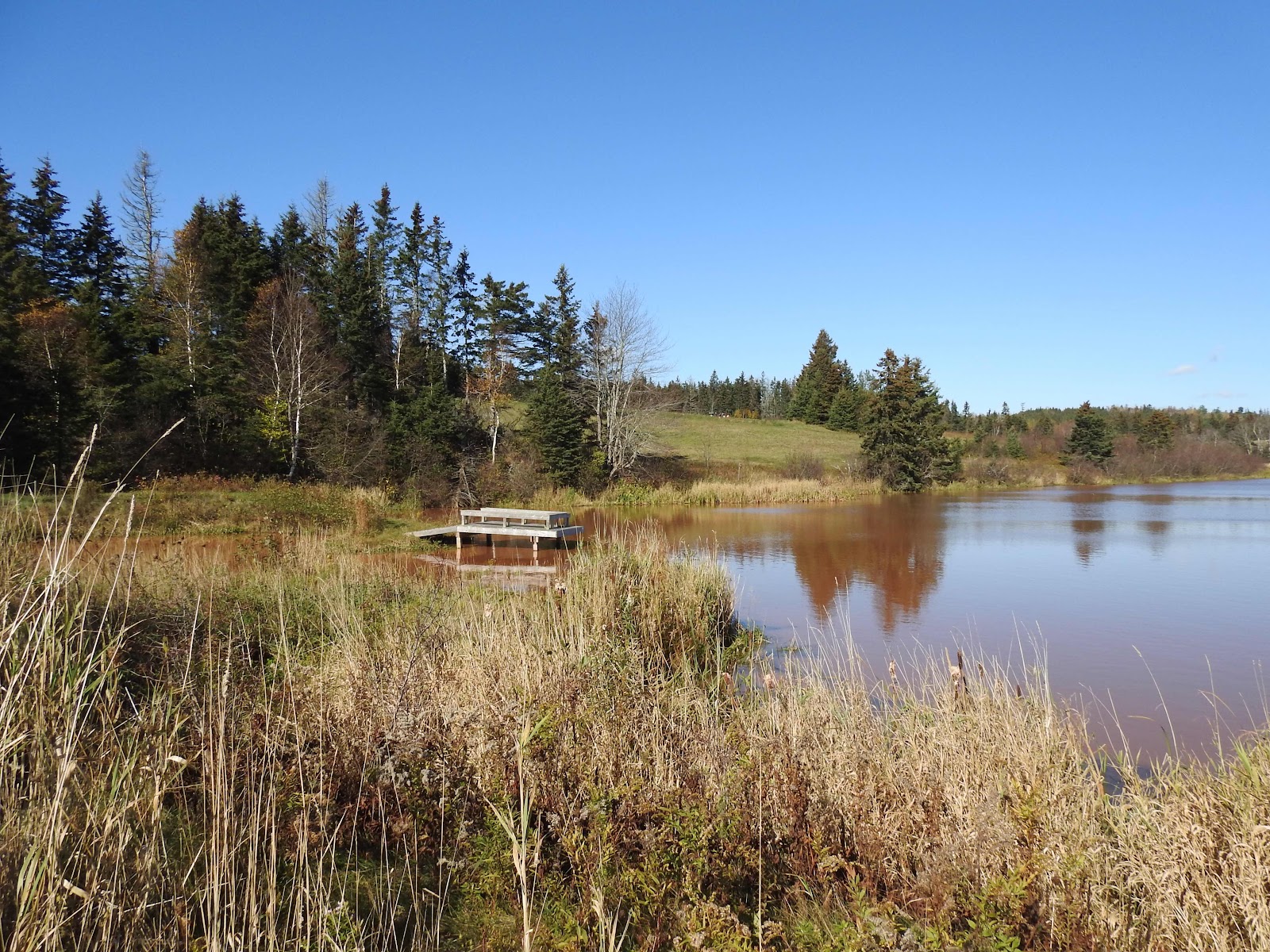 There wasn’t much colour there until one looked more closely. A walk around the area revealed tiny splashes of colour from the hardiest of the wildflowers still blooming. Strangely enough, two lupin plants, 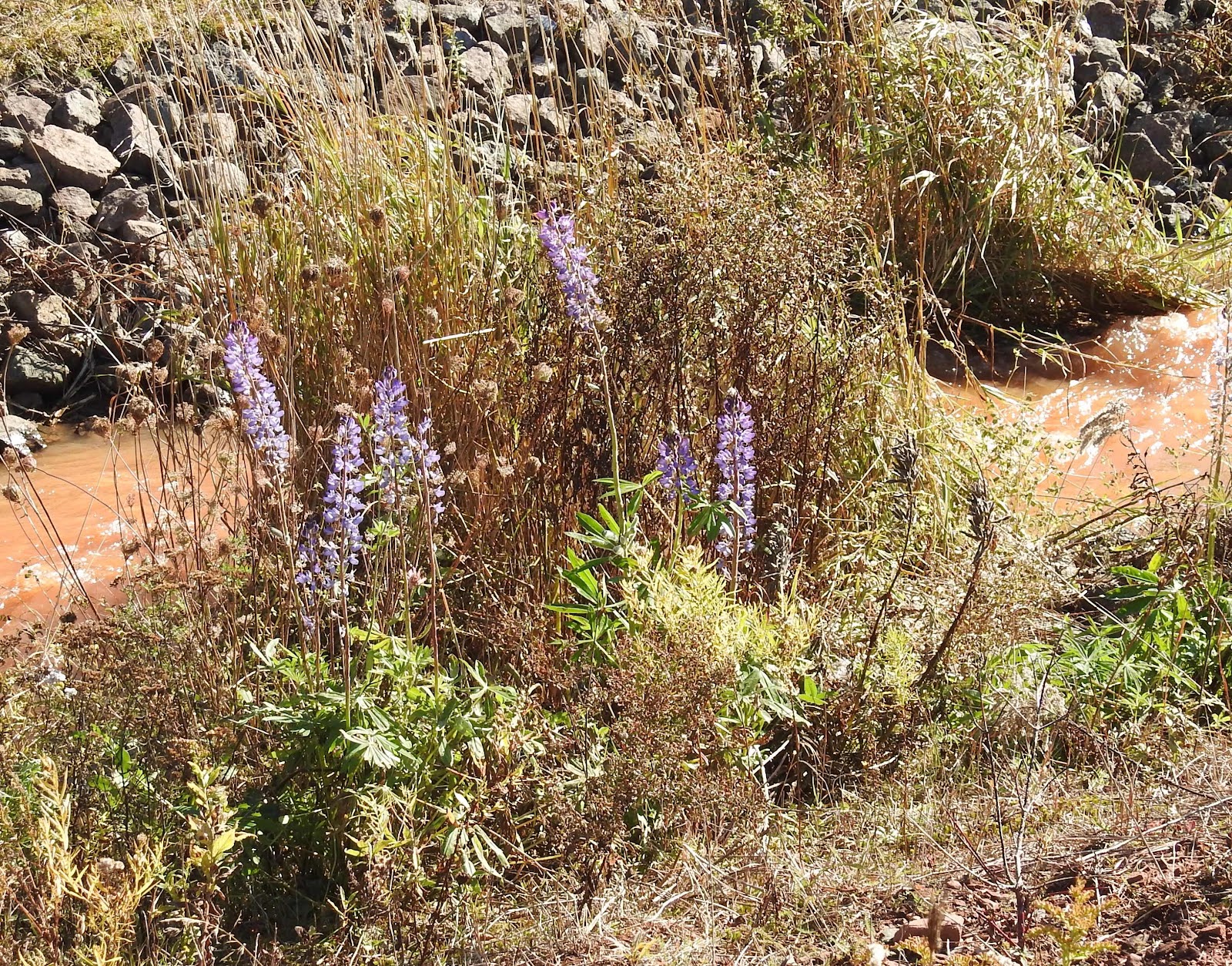 which are finished blooming in June, had flowers. Clover, asters and Queen Anne’s lace 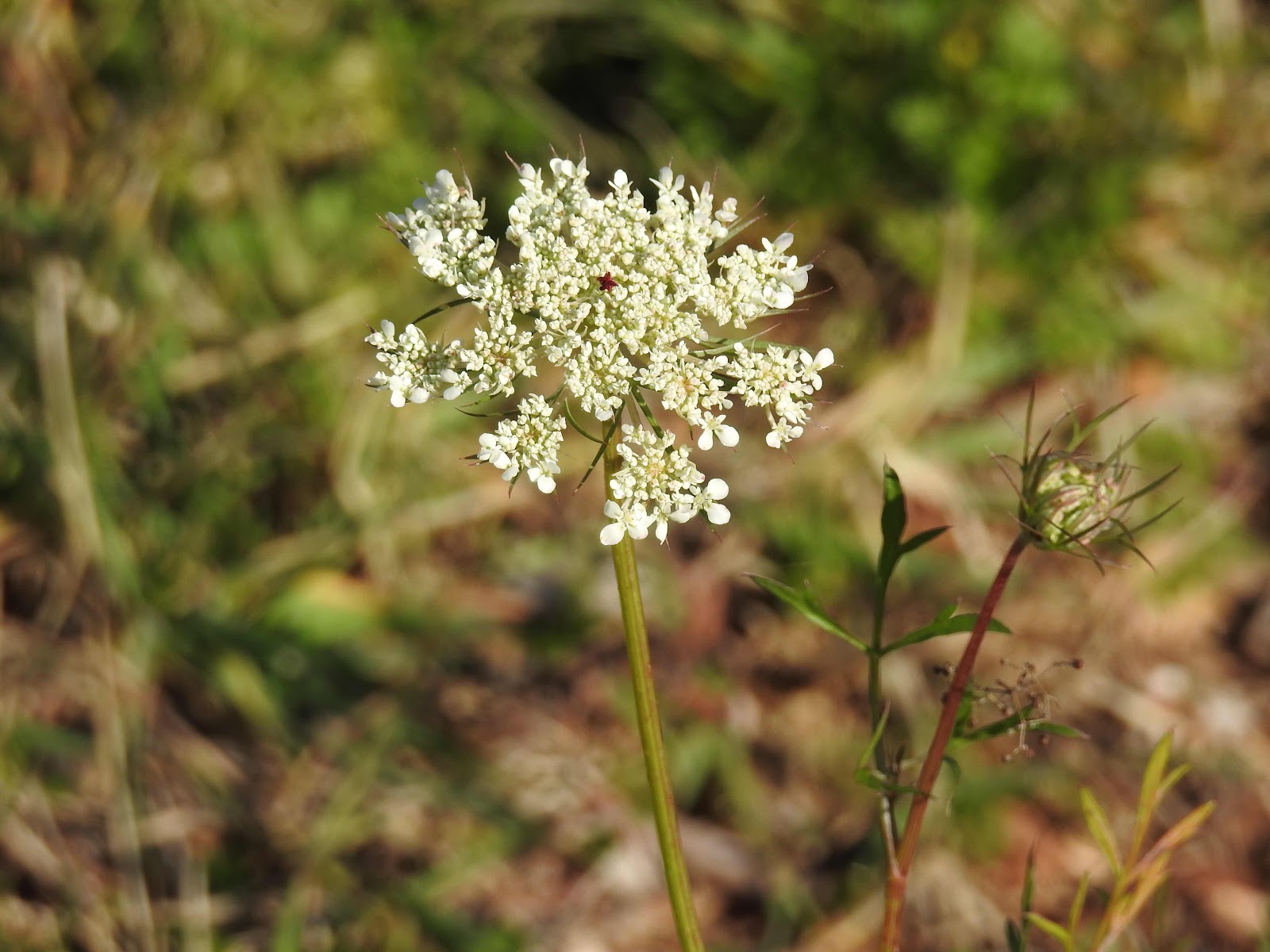 lined the path as well.

Red berries were plentiful and will provide a luscious treat for the birds in the coming days. 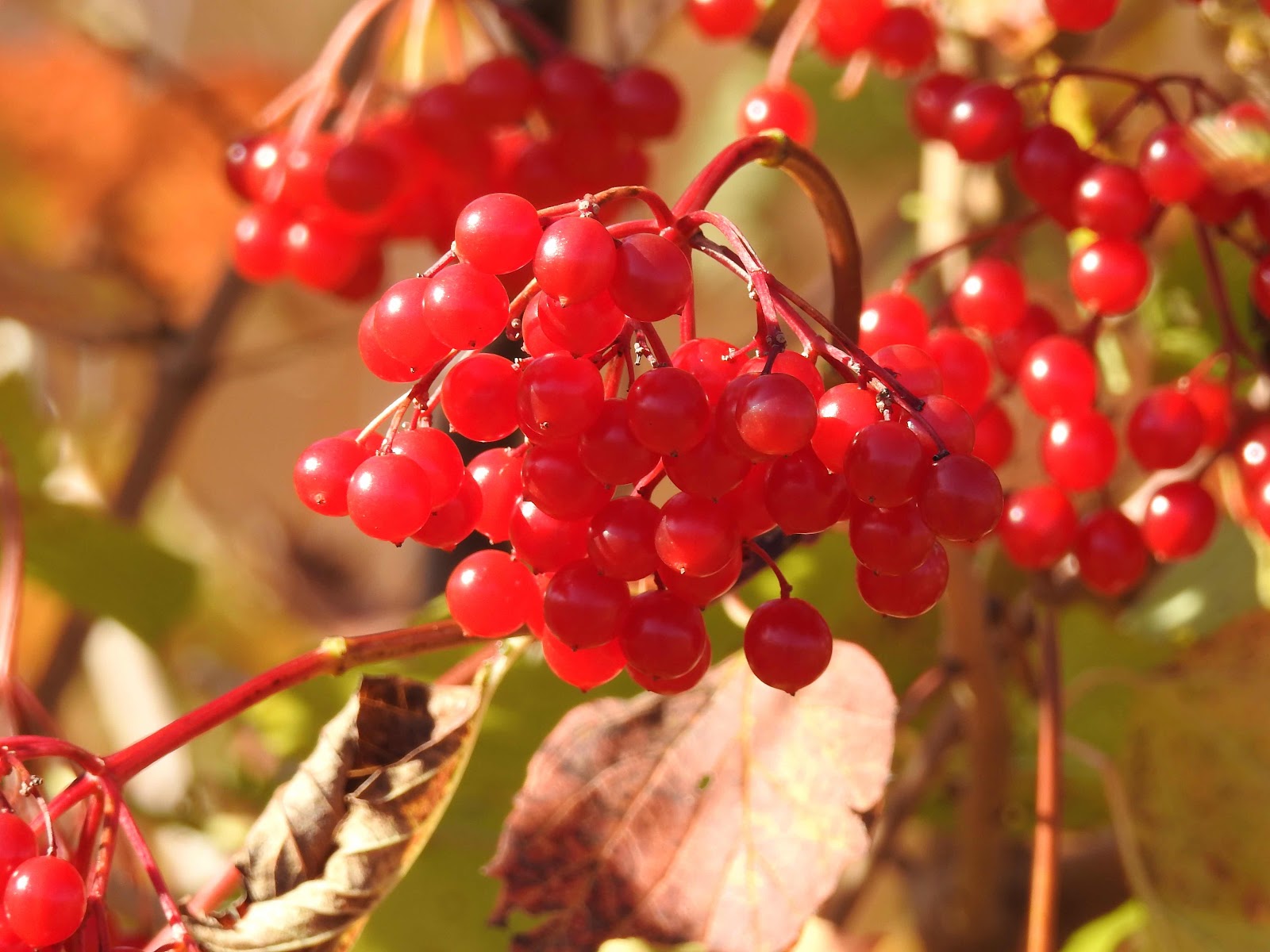 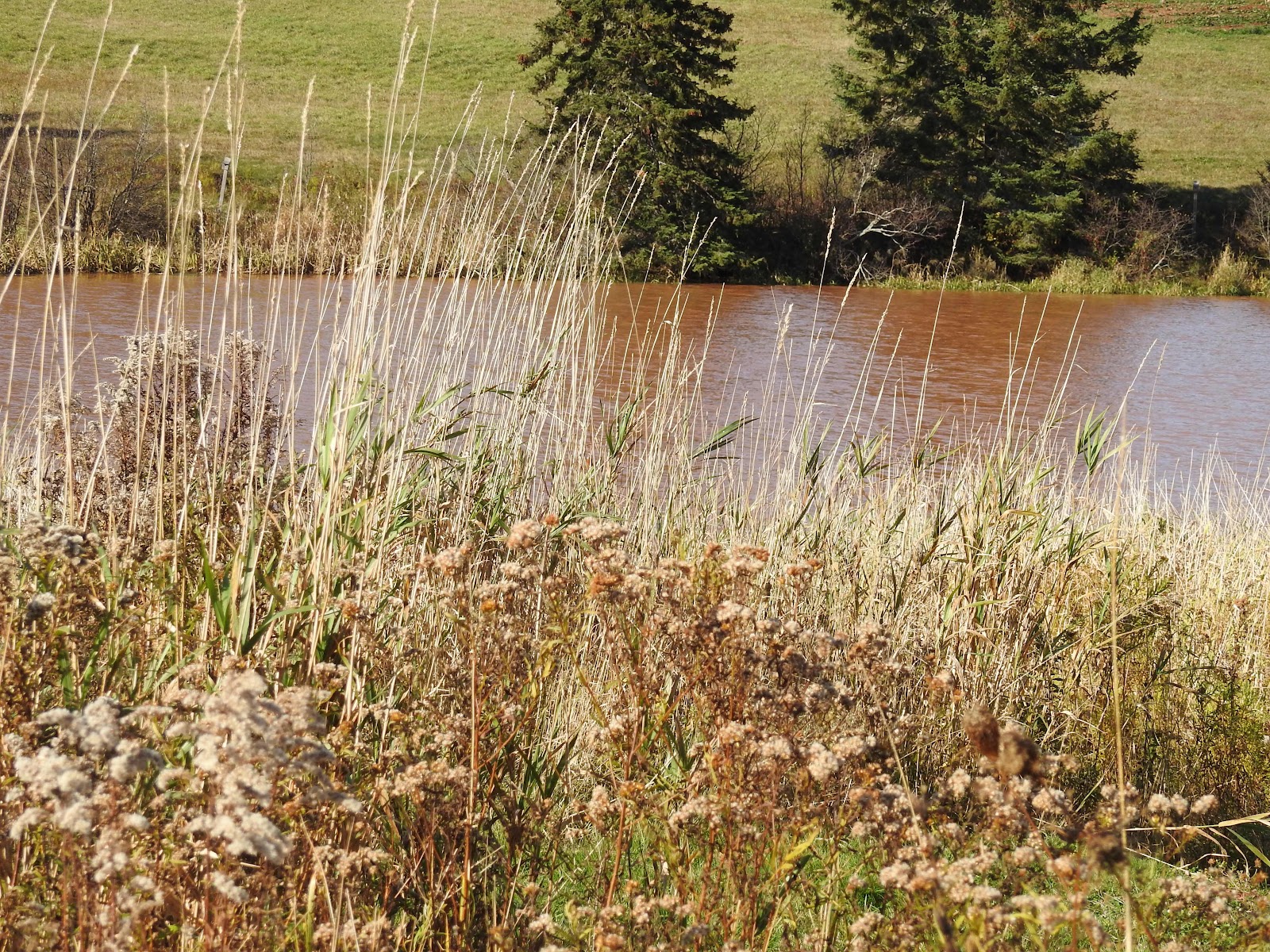 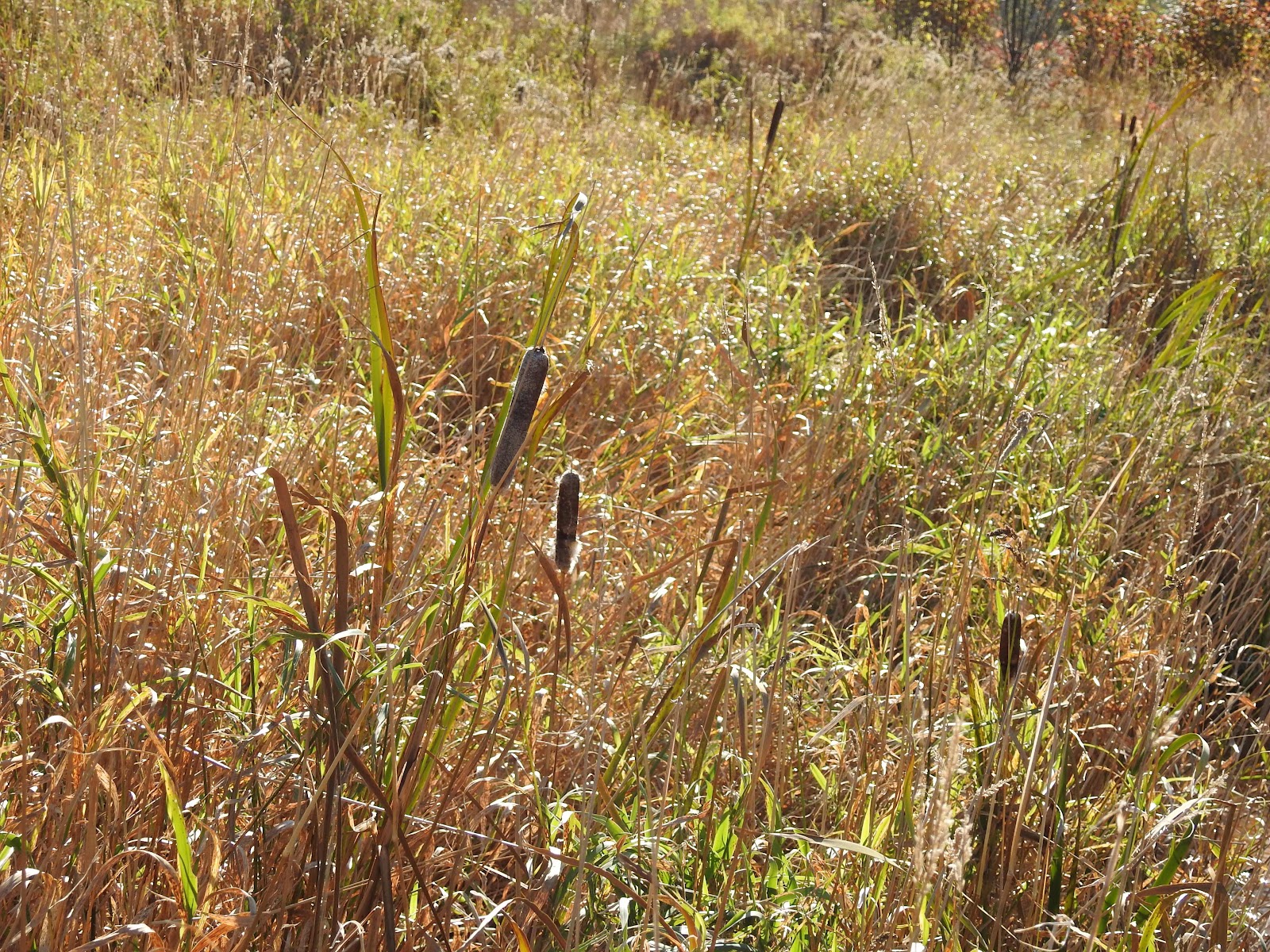 were gone to seed for another year and the ducks came out from among them and swam up stream. Mallards 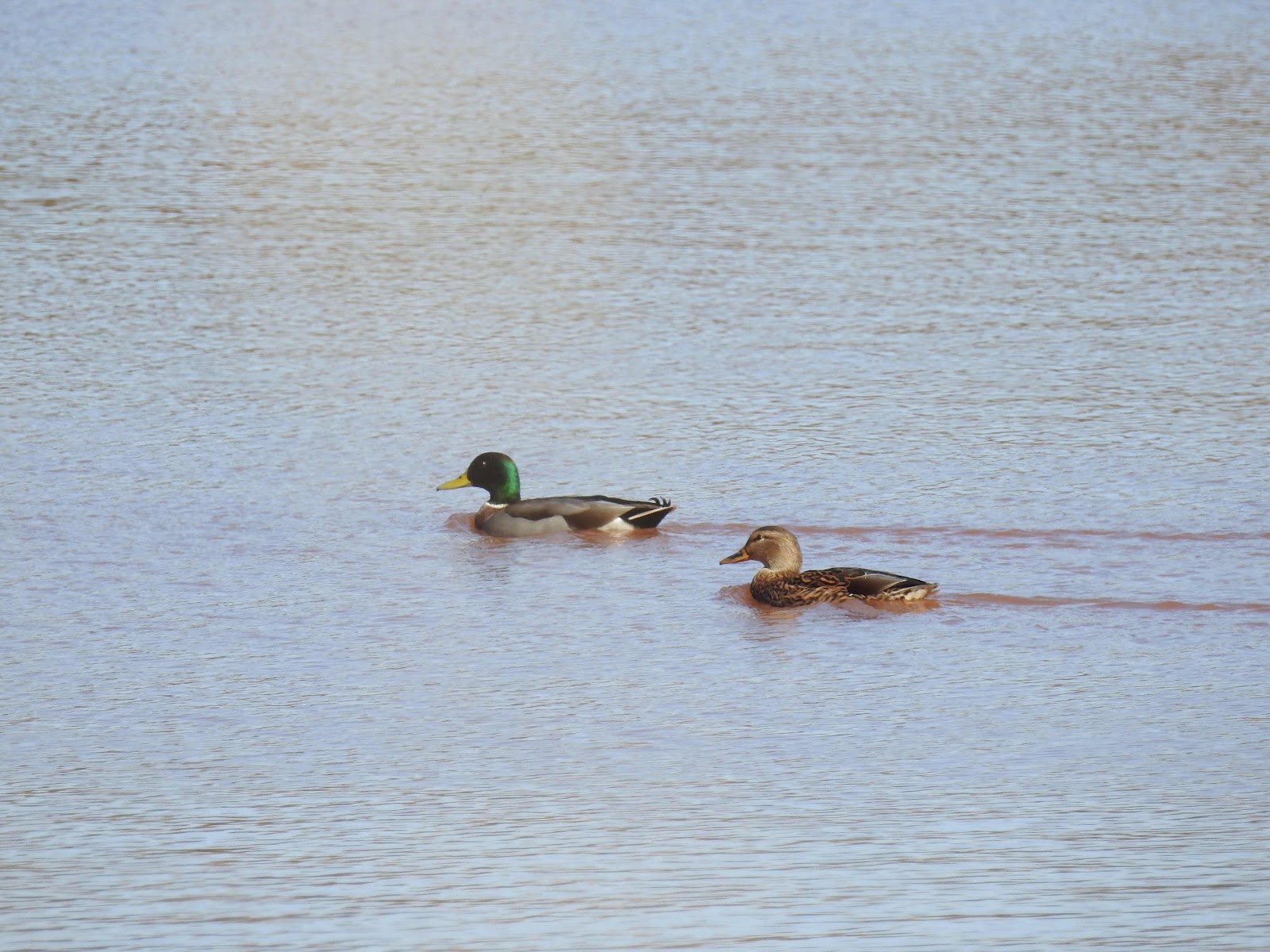 and American black ducks are plentiful in this area. 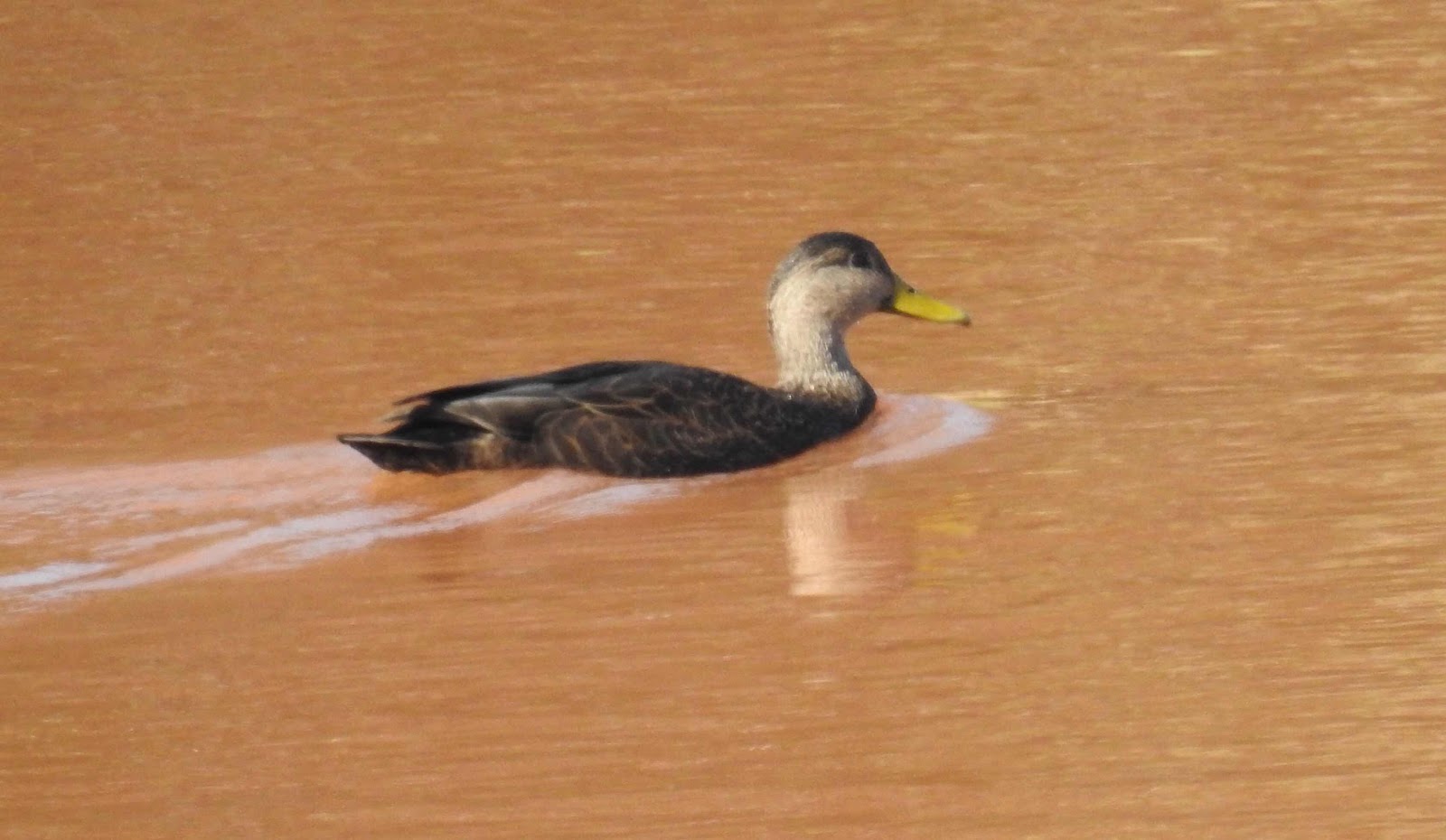 One of the most tranquil features is the running water. 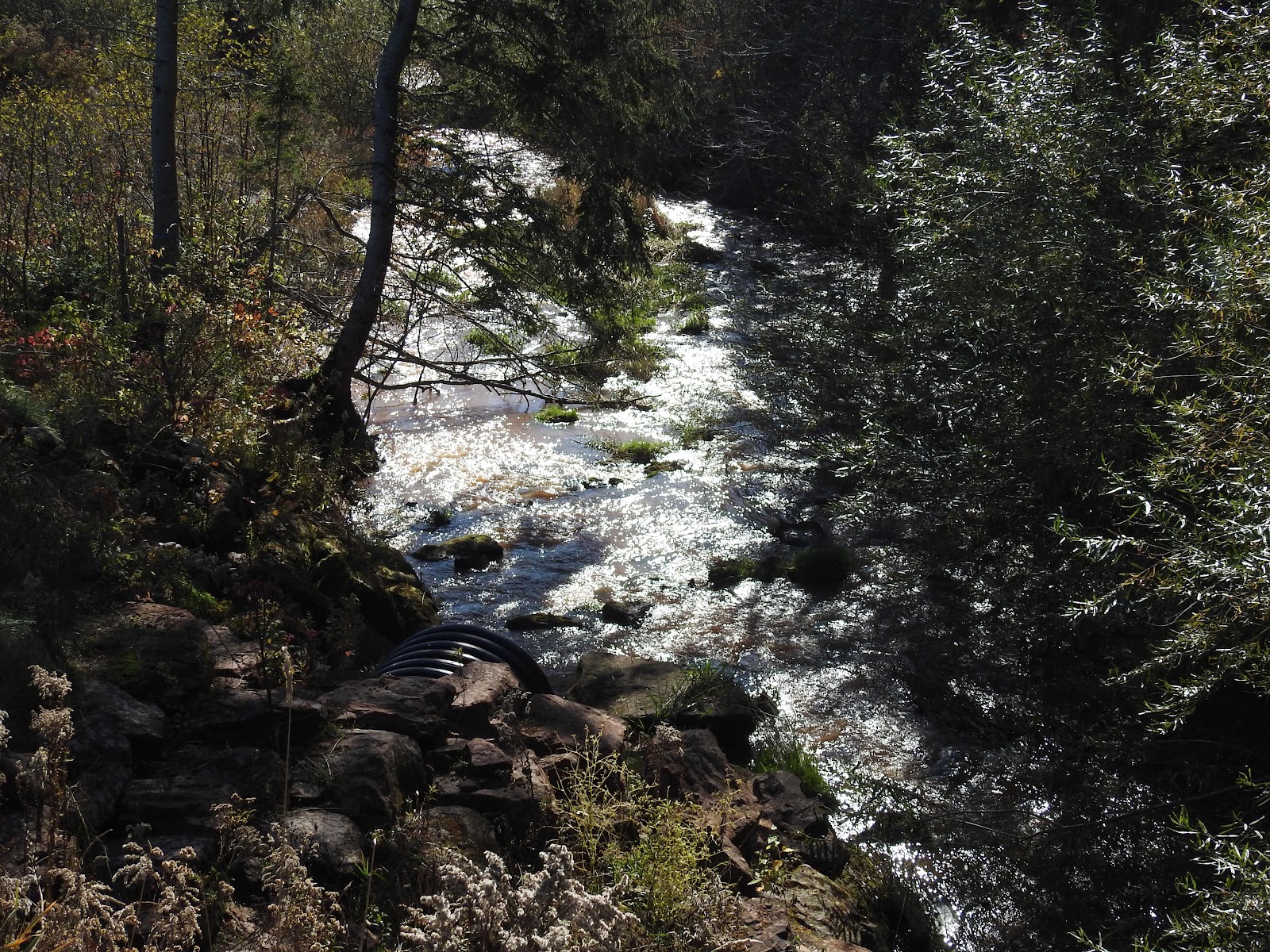 Its sound soothes and relaxes the spirit as we sit on the dock to watch the ducks and listen to the water. 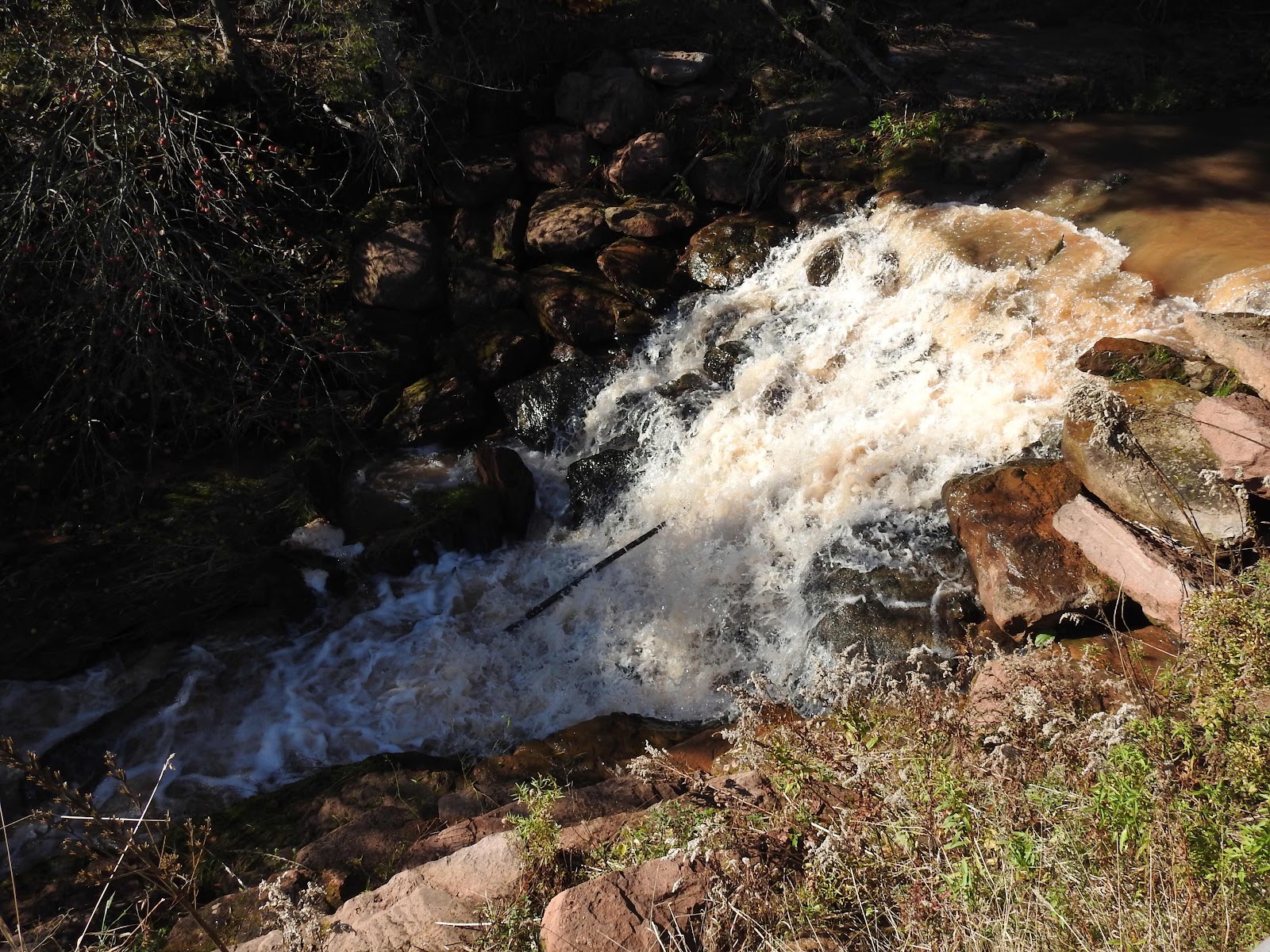 Nearby a farmer weeds his strawberry patch after what I imagine was a productive season. 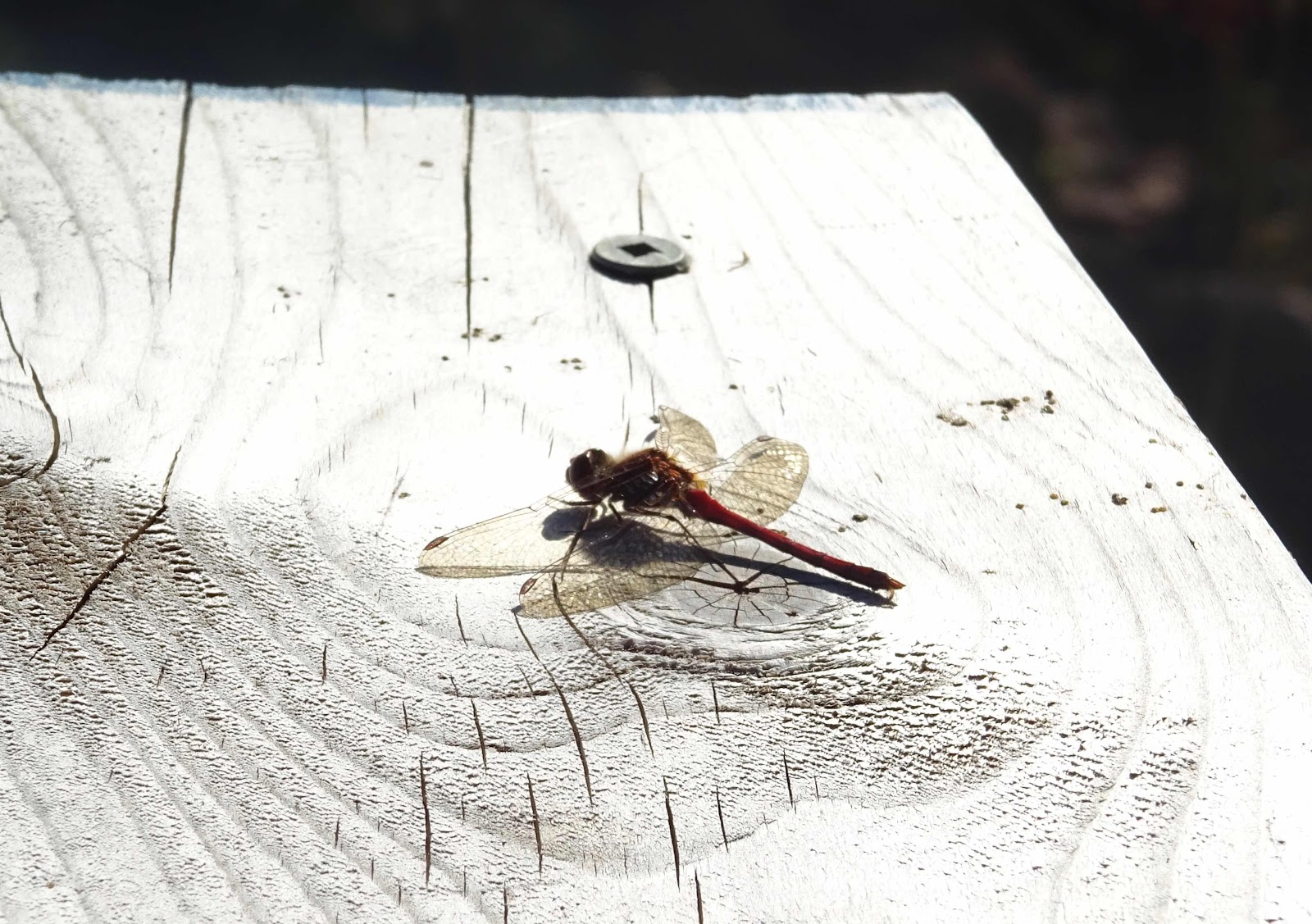 and butterflies are plentiful this day, along with an occasional mosquito. It is late in the season for these insects.

We have never visited this area during the winter. Maybe this year...

it is amazing what one will see when we look hard enough. we had a little goldenrod in bloom last time we looked!!

the water is beautiful!!

What a lovely area, Marie. Your pictures have brought this place to life for me. I wish you would visit in winter so I can see what it looks like then. Thank you for sharing it. :-)

Did you ever read the Lupine Lady? I read it to my kids regularly and they loved it. My oldest gives it to friends when they are pregnant with a couple of packs of lupine seeds. Sweet book.

The book is actually called Miss Rumphius. I just remembered that we called it the Lupine Lady.

WE also have a park with a similar name!

I could happily sit on that dock with you! I love sitting by water, whether it is lapping or gurgling or crashing (as in waves). It makes one feel renewed and ready to face the world again.

Thank you for your open eyes and heart.
Truly gorgeous photos which capture the serenity and beauty.

A beautiful area to explore nature and listen to it. So much beauty to see and enjoy.

I wish we had rivers like that around here in my part of Iowa. Our rivers don't look like that. They look like muddy areas that were cut out of the soft ground.

Your words together with the pictures, create a scene of peace and calm. I love that.

That reddish brown water makes a nice background, too.

So many beautiful scenes here...I don't think there is anything left here in the blooms or butterfly dept, but I would not mind being wrong!

It's a really wonderful series of images, displaying nature's beauty in myriad ways. To sit on that dock and wile away an hour or two would be a real pleasure.

The gentle sound of a stream is so soothing.
Your posts provide soothing moments as well. : )

Lovely walk today Marie. It's good to know not everything has decided to close down for the year

You've reminded us that we must remember to open our eyes to see what's around us.

I great time of year to look for colour I think. That water does look a little chocolaty!

Surprisingly similar to the wildlife I encountered on my walk yesterday, though here things might hold out for another month or so before succumbing to the winter chill, though it won't be anything near as cold as you experience there.

You always notice the colour and interest things on your walks Marie, love seeing them 💙

Stunning and so lovely.
I feel so much peace looking at your photos.
The last one of the dragonfly is a masterpiece.

Your words and images are always a gift to me. Thank you.

Lovely. You should write a children's book and include pictures of all the flowers/trees/plants, insects, and historical walks. You have so much information at hand.

Such a beautiful area!

Lovely shots. The red berries are so perfect they hardly look real!