My friend Lucy invited me to lunch at her home in the central part of Prince Edward Island. The rural setting amid rolling hills is one of the rare areas on the island which isn’t flat. 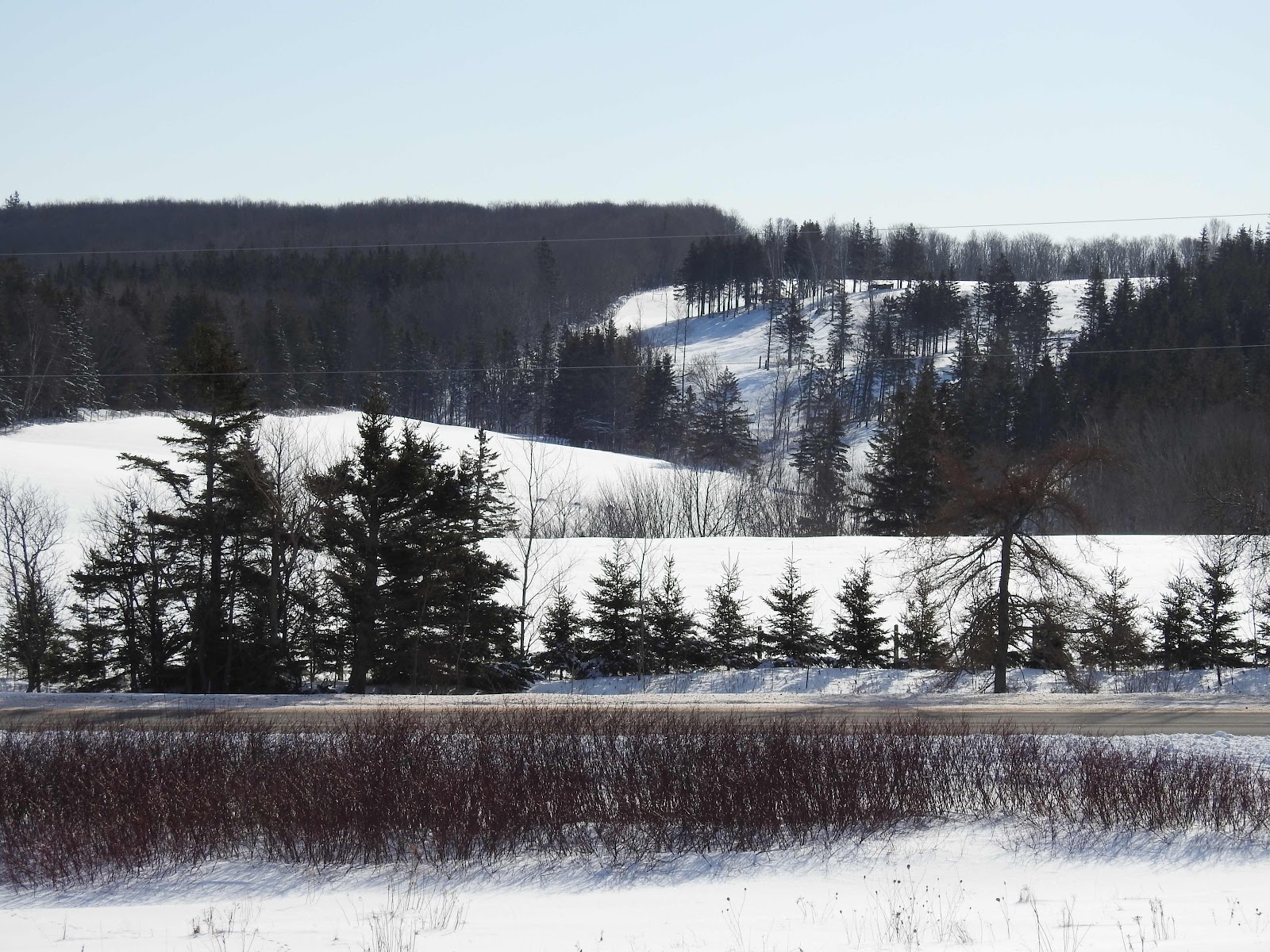 The snow-covered fields insulate the rich red soil from winter’s grip and brighten the landscape. 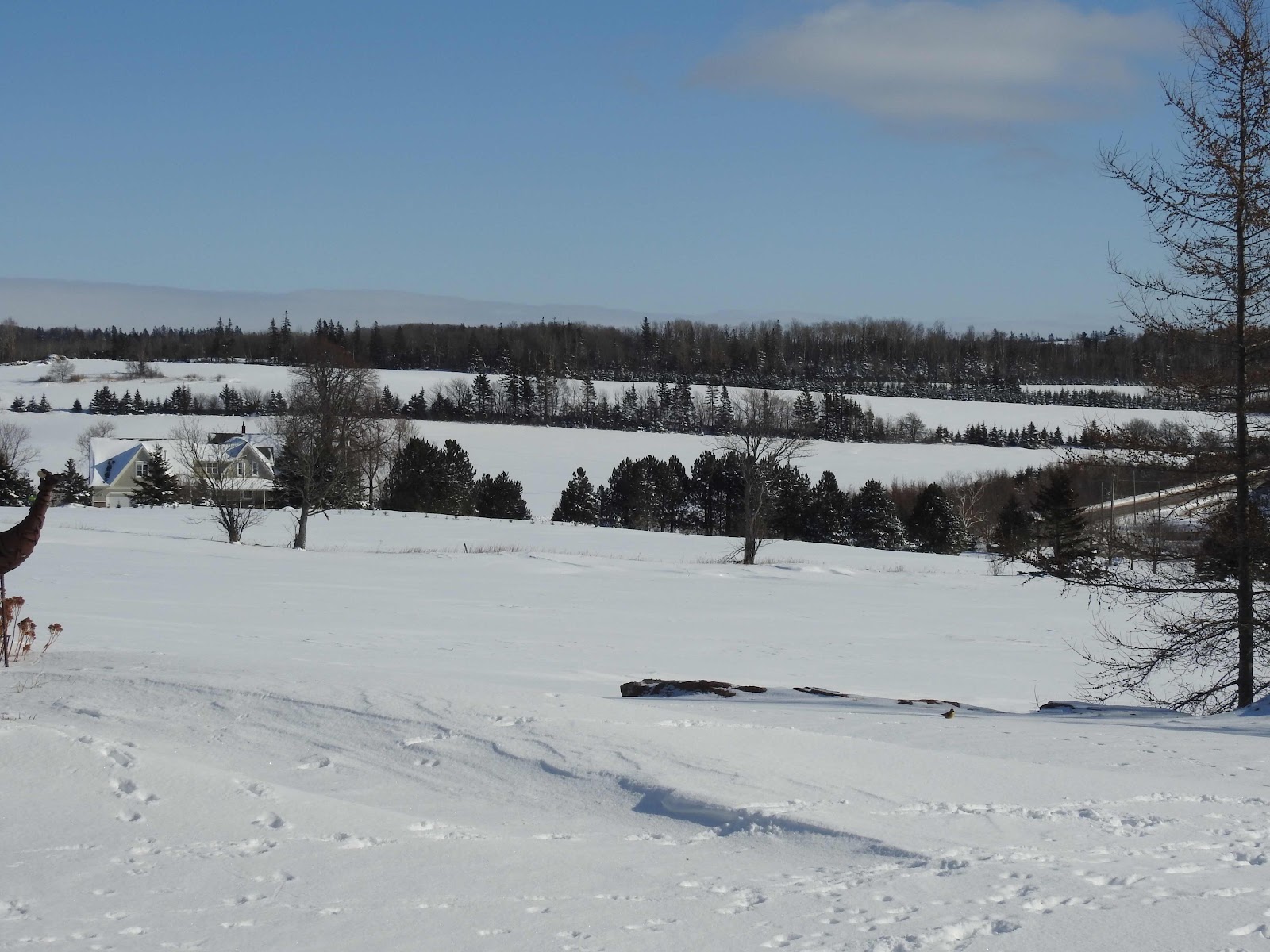 Lucy’s home has huge windows on the main floor which give a spectacular view of the surrounding countryside. Outside her windows Lucy has several bird feeders, so we sat and enjoyed her delicious sour dough bread and seafood chowder as the birds enjoyed their lunch too. 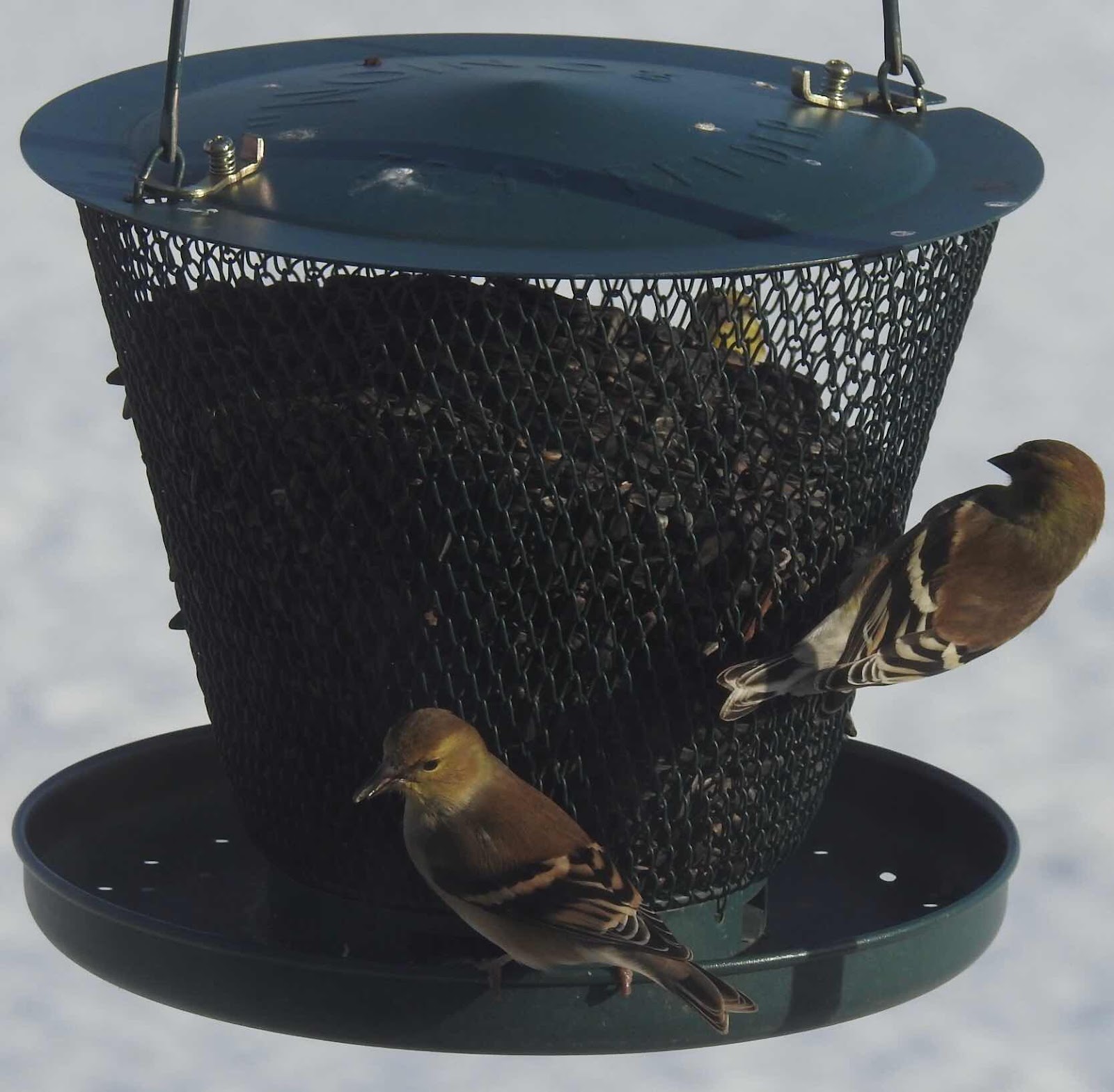 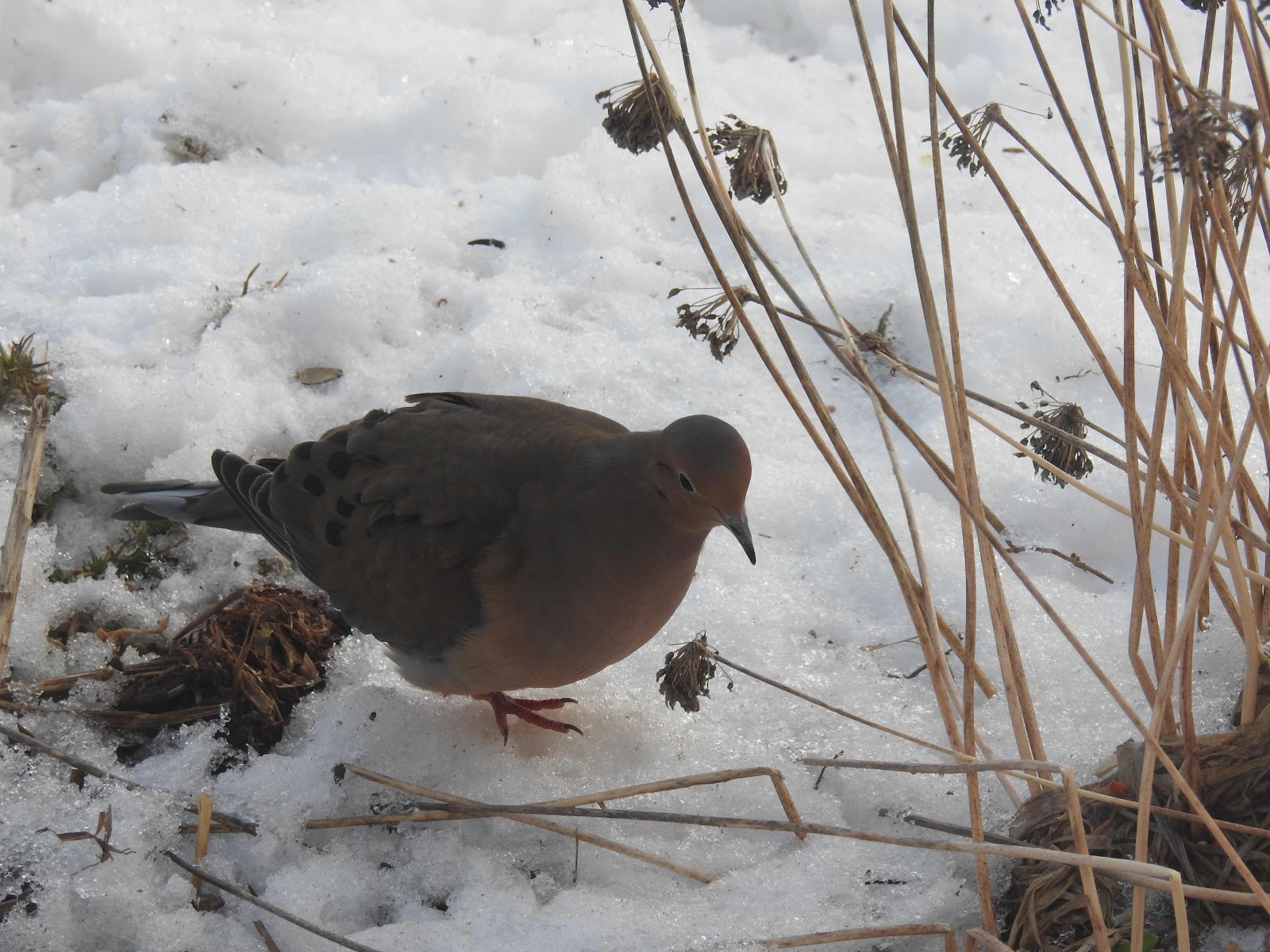 and goldfinch flitting around the feeders. I wasn’t quick enough to get photos of the first two but the goldfinch in particular were co-operative. The markings formed when the feathers furl are a natural beauty. 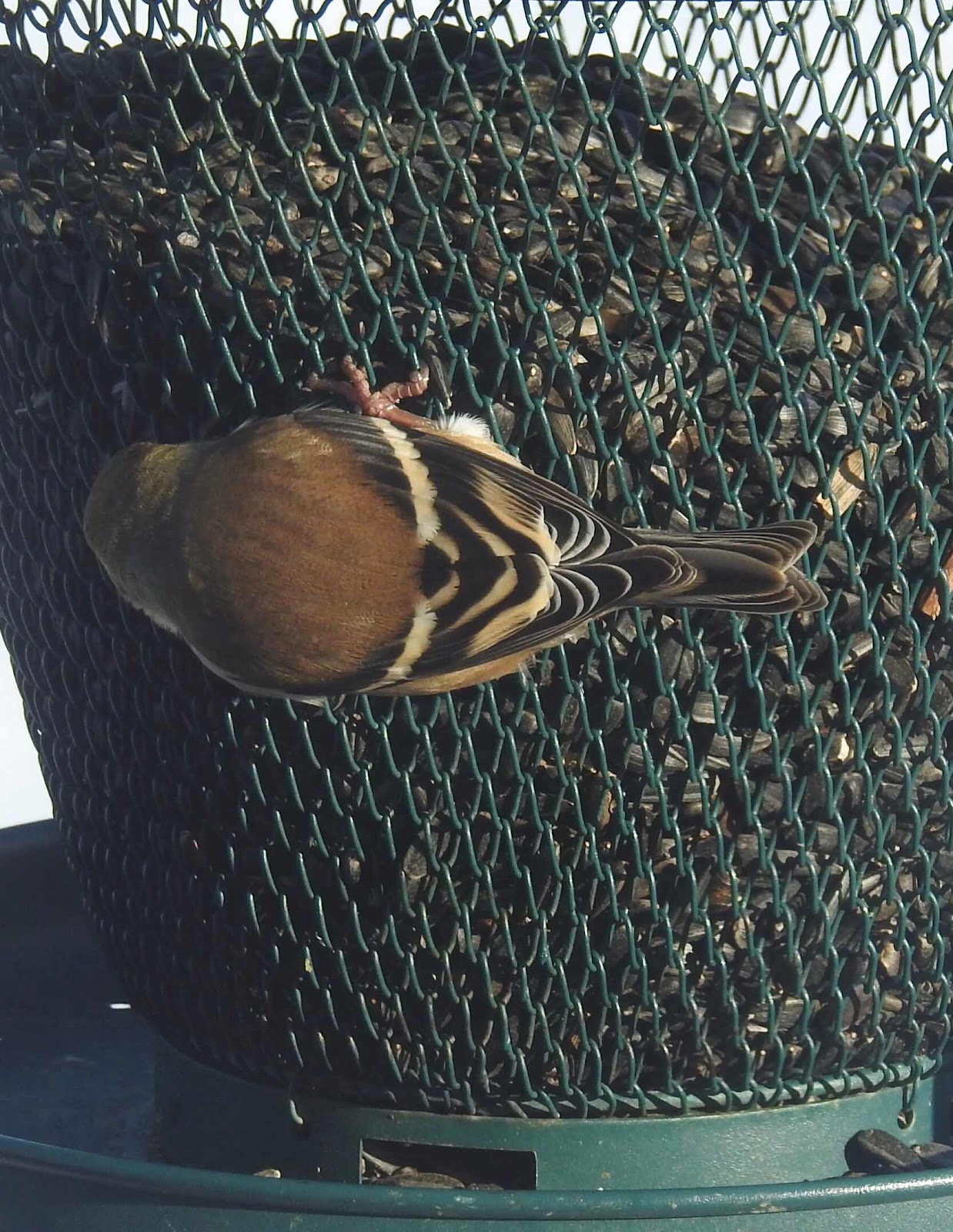 I don’t see any goldfinch along the boardwalk this time of year. It was a real treat to experience them at all and from the comfort of Lucy’s home was a double treat.

Her feeders attract many birds and work well for the little birds. 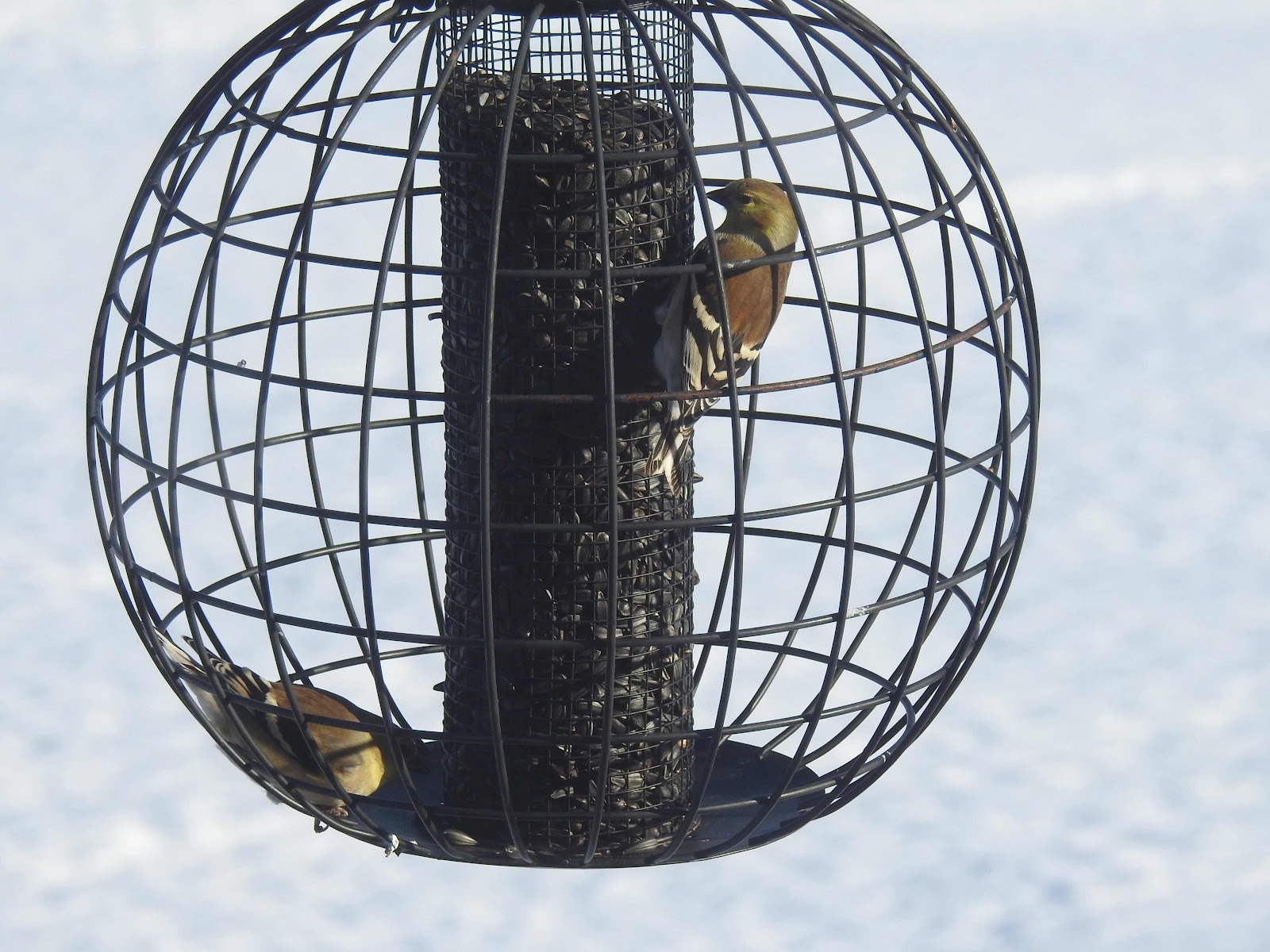 I will replace the one we have with some of these feeders which are more friendly to the smaller species. Our feeder attracts the neighbourhood crows now. I know crows have to eat too but they keep away the smaller birds.

A few weeks later I dropped Lucy home and as we drove up the driveway, a bald eagle flew overhead. Juncos were feeding from the seeds at the base of the feeders that day. 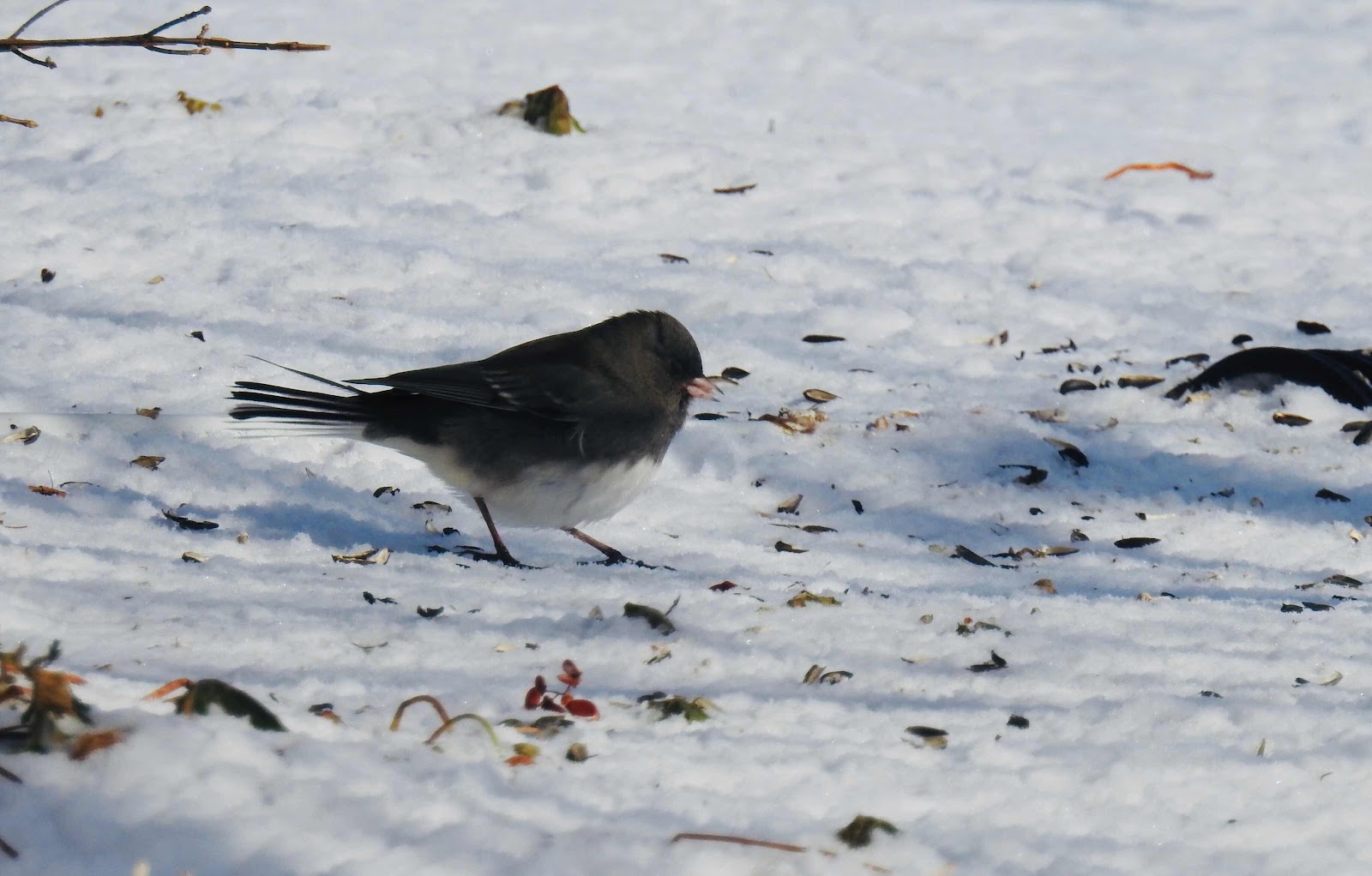 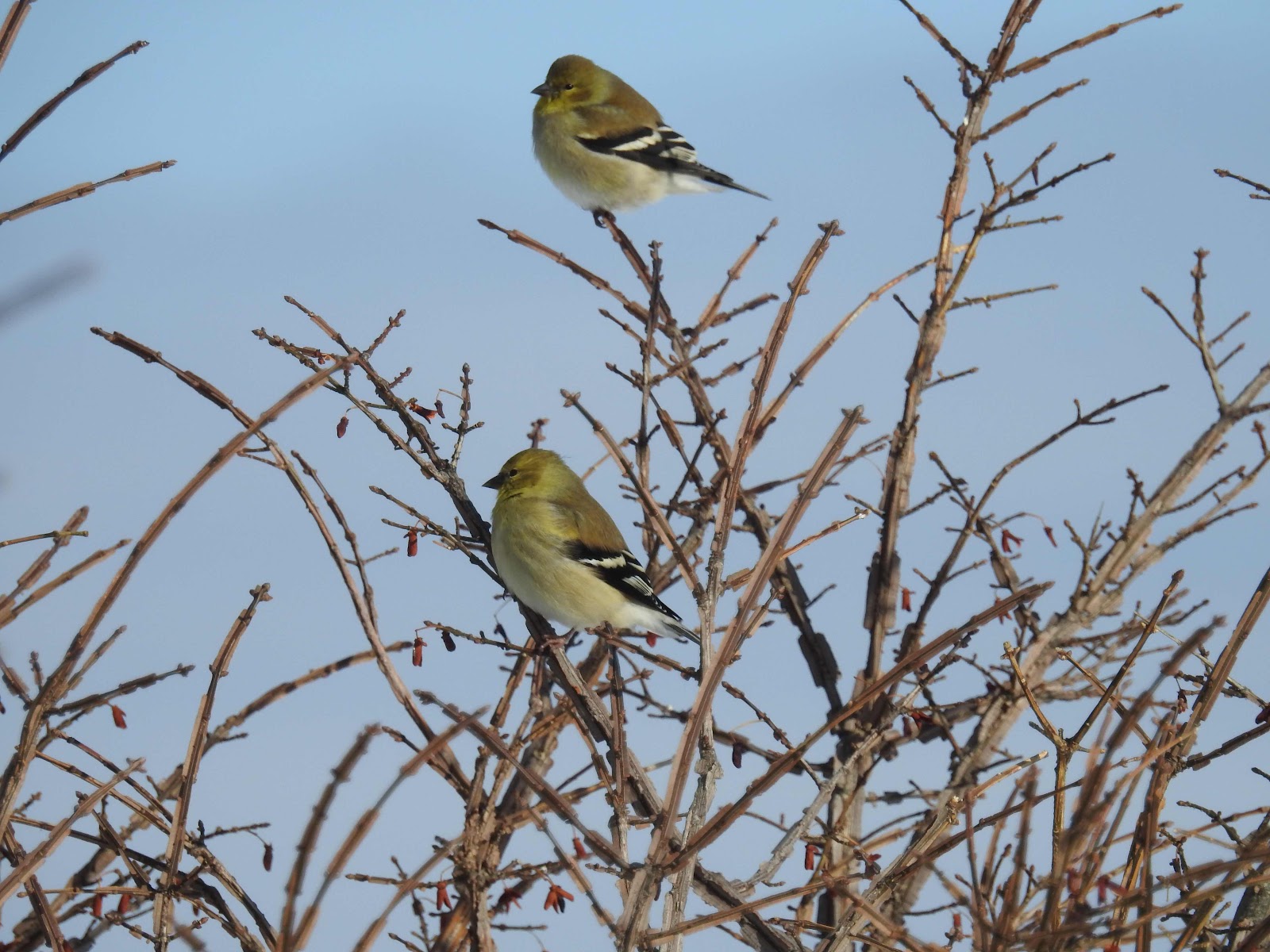 were around of course as were the bluejays and chickadees. I fear I’d never get anything done if I lived at Lucy’s house.

Imagine having the good fortune to live there.

I've never seen one of those feeders that allow small birds to be safe from the big ones. When I fed the birds here, I had lots of goldfinch. They and the chickadees are my favorites. :-)

I agree with you that view is fantastic though a bit on the cold side at present. A great selection of birds as well. Keep warm, Diane

Lovely but cold! Squirrels attack our bird feeders. One has just broken and the others are tatty and rusty so we need to replace them all.

What an amazing view to have from your window, and watching the birds in comfort would certainly stop me from doing much work around the place.

Oh my. I doubt that I would get a lot done if I lived at your friend's house (our birds distract me often enough).
That sounds and looks like a wonderful day.

What a beautiful scene to view from the window. Such a lovely location¬

I love your bird pictures. I was outside for a while today getting pictures of some of the Pine Siskins. I so enjoy birds and all the beauty they bring.

She has some really nice feeders. If you are willing to invest some of these feeders that protect the food for the small birds are a blessing. I think it would be great if you could buy one.

I love watching birds and can waste a lot of time...if you call it a waste. I think it is probably actually good for our health.

lunch with a view, your captures are awesome. she has some very nice feeders there!!

i am still waiting for my juncos to arrive!!

Those feeders look excellent. I don't think I've seen that kind of design here, though I expect they're available somewhere.
Incidentally I went to see The East Pointers, musicians from PEI, the other evening and very good they were too.

A Bald Eagle poses no threat to small songbirds. Bald Eagles prefer to feed on fish above all else, and will scavenge road killed deer carcasses and the like, and in winter often turn to waterfowl to augment their diet. An injured duck is a sitting target for a hungry Bald Eagle.

What à wonderful view Marie. The small birds ars a delight to watch. I have exactly the same problem, the crows chase away the small birds.. all except the rainbow lorikeets, it's so funny to see two little lorikeets in the birdbath on a hot day with the crows keeping their distance until they are finished, they're fiesty wee birds 😄

:))) That was such a pleasant outing! An a productive one... look at the beautiful birds you photographed! If I lived there I would spend most of the time with my camera at the ready. :))

Aww! I live in a condo now but when I lived in my townhouse I fed the birds. I really enjoyed that. The post ade me miss them. The pictures are wonderful.

wow
your friend seems such an inspiration dear Marie :)

thank you for lovely glimpse ,i so loved the beautiful birds feeding from her feeder
nature is always so inspiring and healing
thank you for asking my well being in comment my friend

days are being so quick for me ,i will be visiting regularly as i miss it more during my busy routine :)
i am fine with heart filled with prays for my kind friends!

Lovely views of the countryside! Your friend has nice feeders for the birds. I love the cute Goldfinches and the Juncos. The Doves are sweet. Enjoy your day, have a great weekend!

Wonderful photos once again. I do like that bird feeder that allows the tiny birds in and keeps the larger ones out. Like you, I know the bigger ones must eat, too, but there just has to be an oasis here and there where the small birds can eat undisturbed!