This time of year Osprey return to the nests along by the harbour in Summerside. They returned last week and people were eager to observe and photograph them. My husband and I stopped to see them too.

There are three nests in the area and three birds have taken up residence in one of the nests thus far. Nests sit atop platforms on poles positioned for the birds by the city. One pole is tipped but the birds don’t appear to mind. 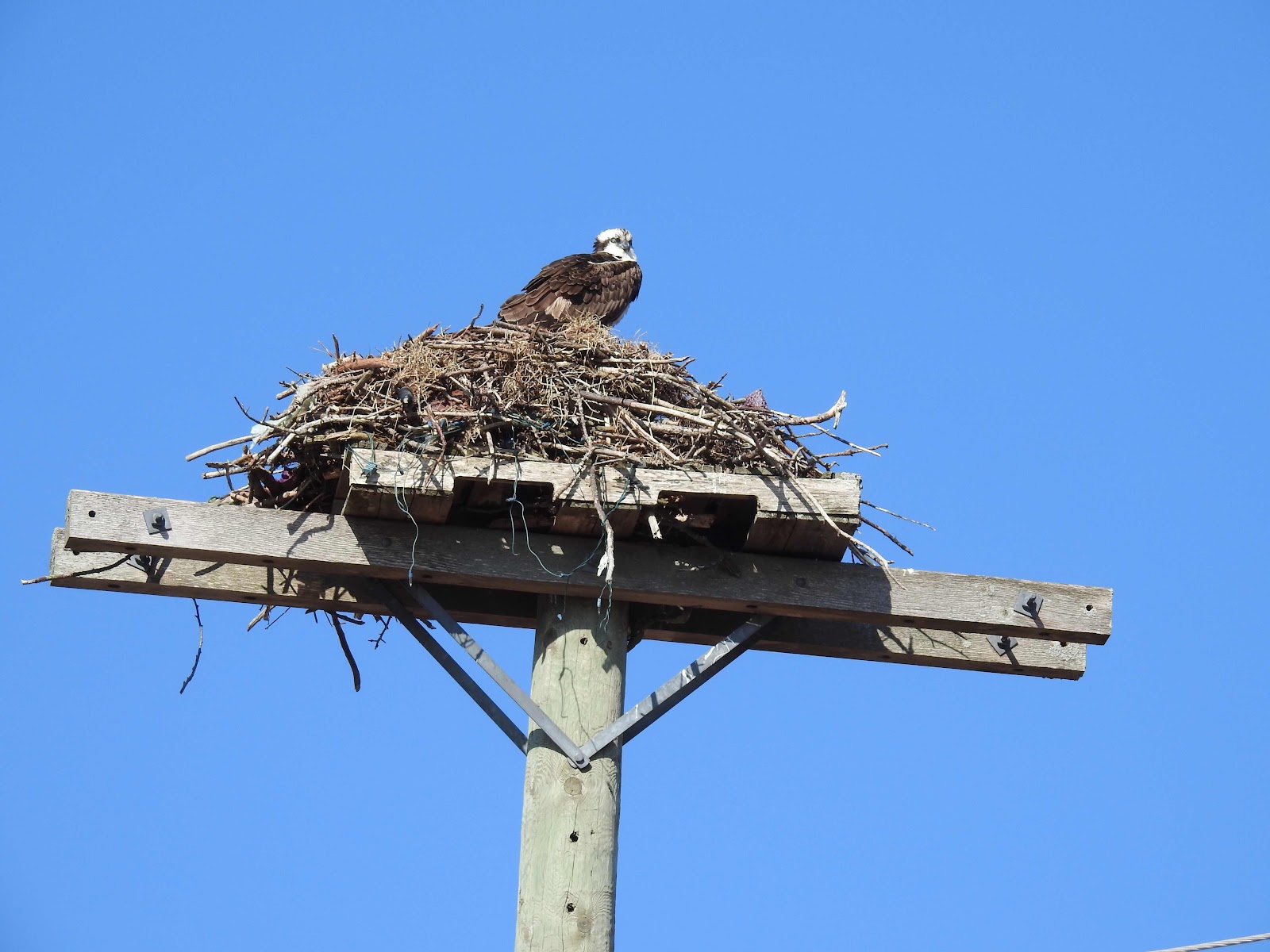 Birds return to the same nests which have been maintained for years.

One of the nests is in a place which is a construction area. When solar lights were added to the area, the Osprey abandoned it. 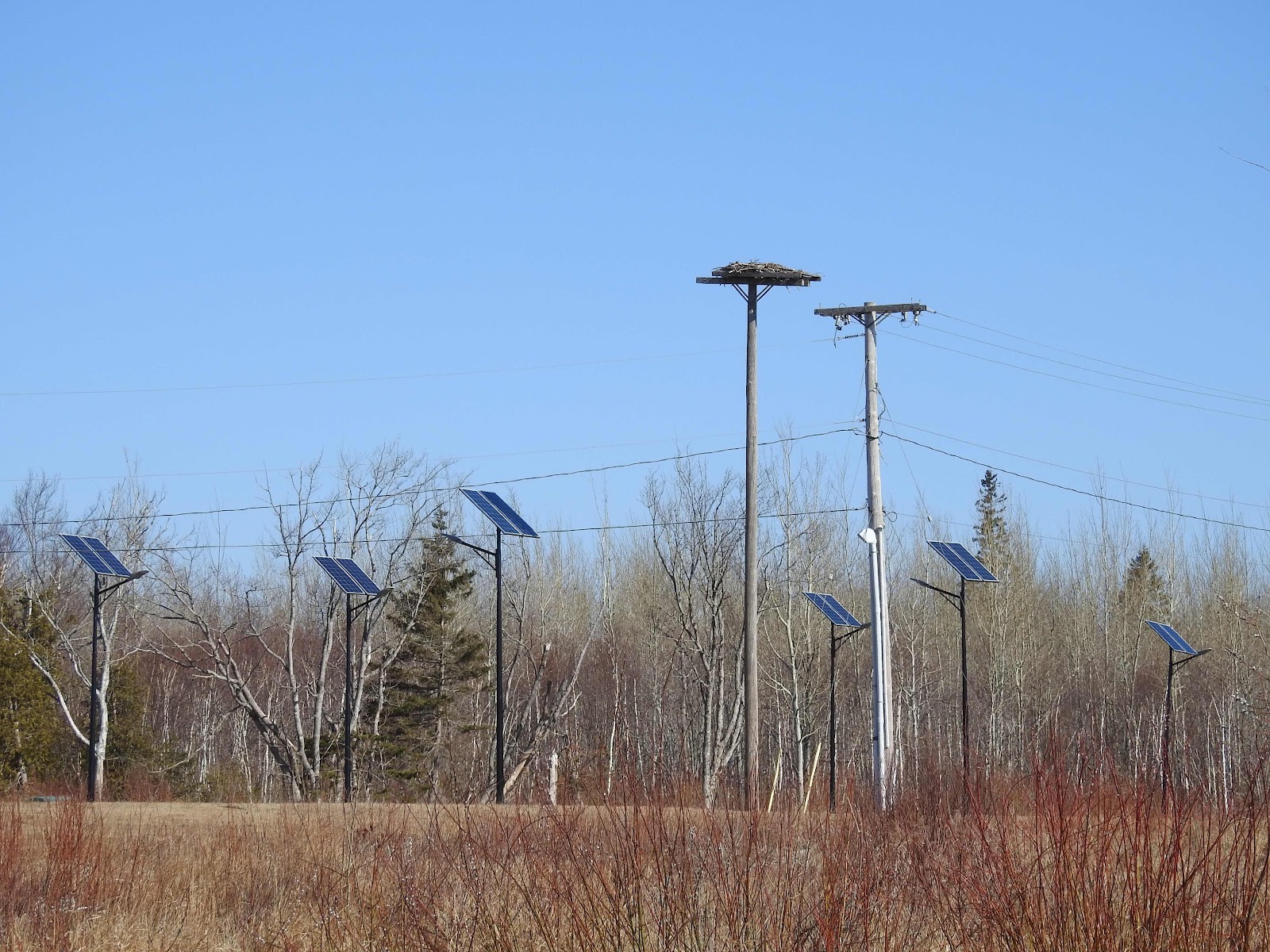 When we stopped near the occupied nest, one bird was present. I was able to take some photos, showing the tipped pole and the fluffed feathers of the magnificent creature. The keen eyes and the sharp hooked beak were impressive in this huge bird. 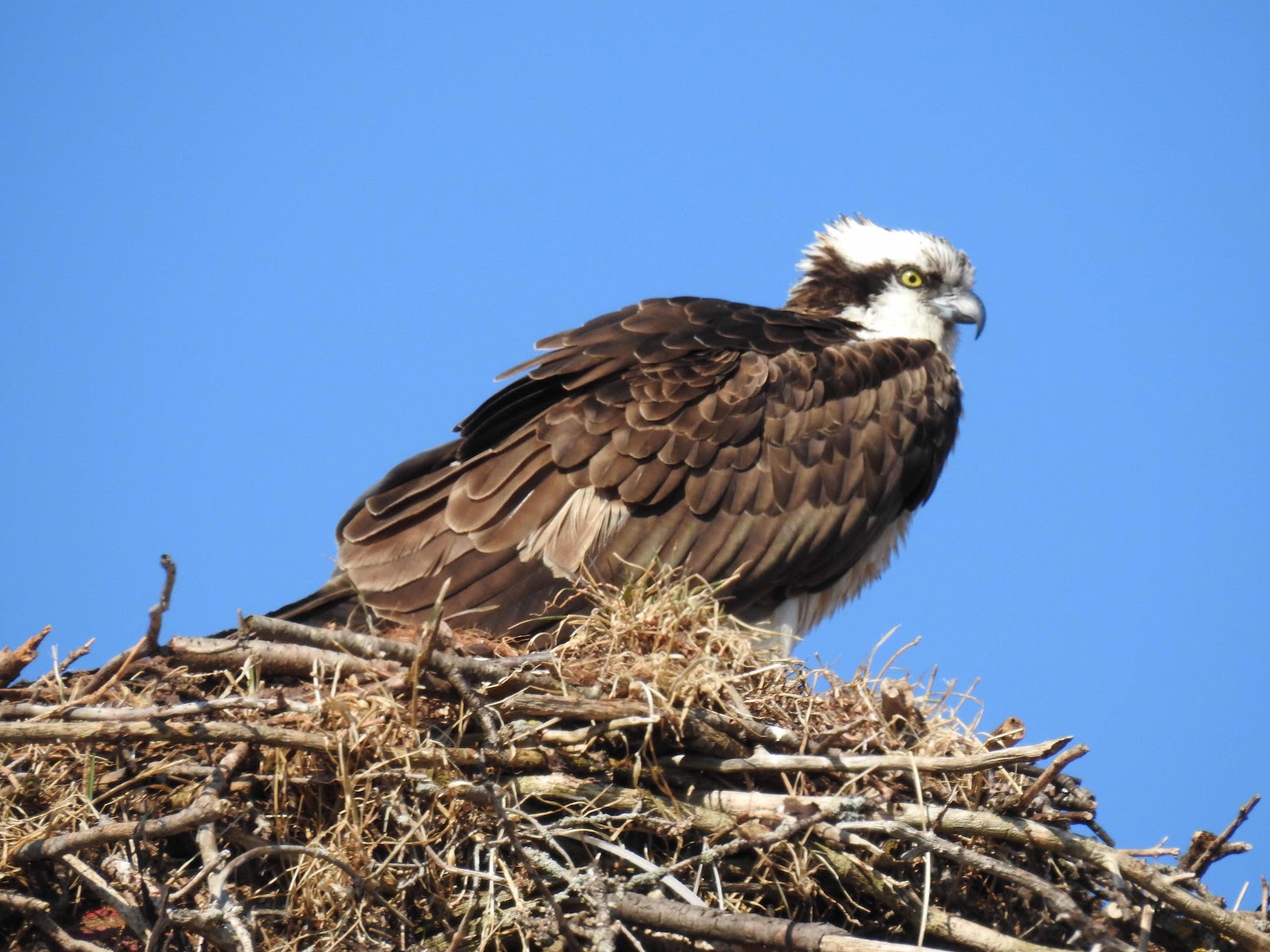 Just as interesting were the items which the birds had incorporated into the nest, plastic, cloth and a set of Christmas light wires. These are merely what’s visible from the street. How sad it is these items were even available to the birds! 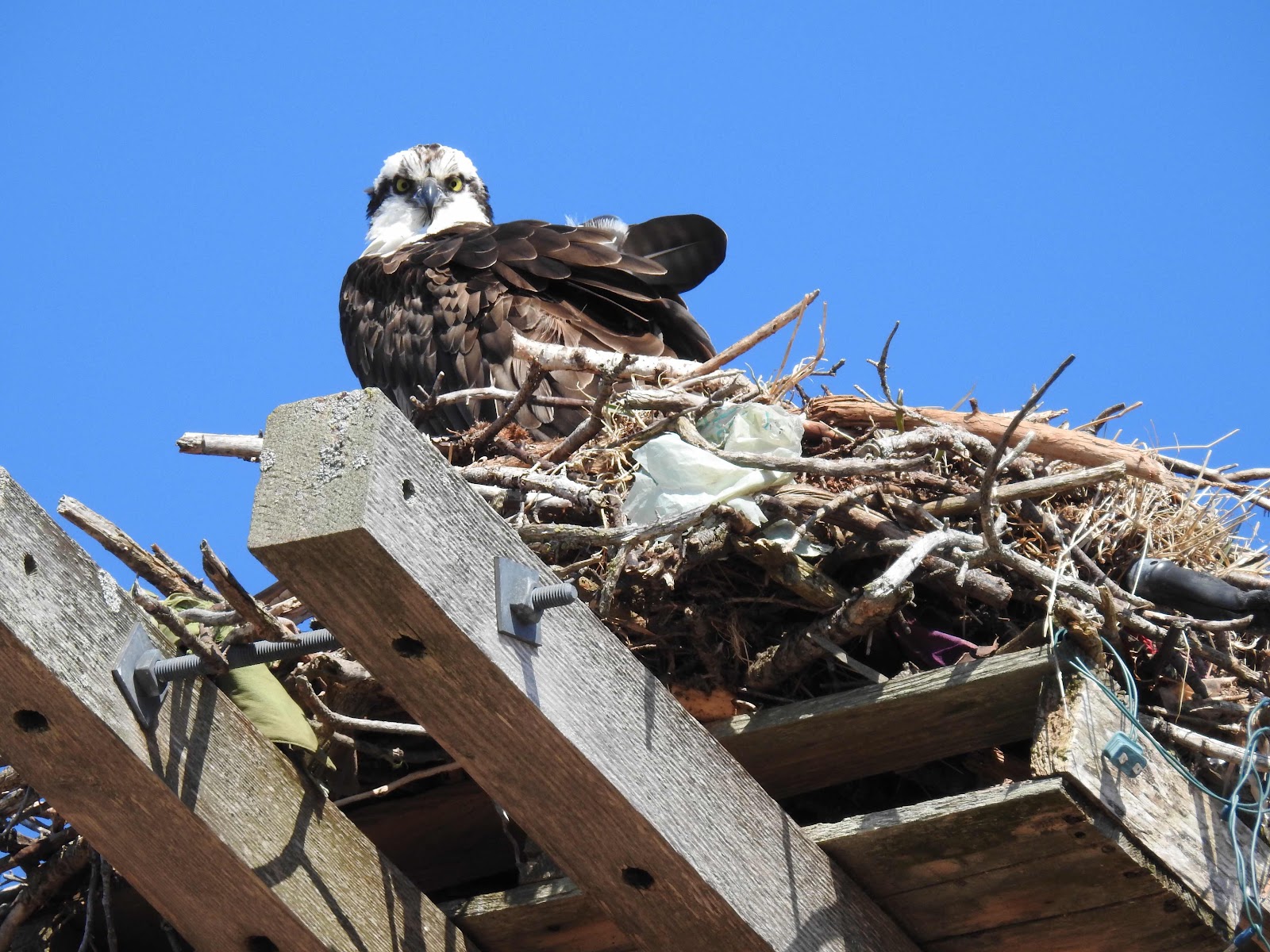 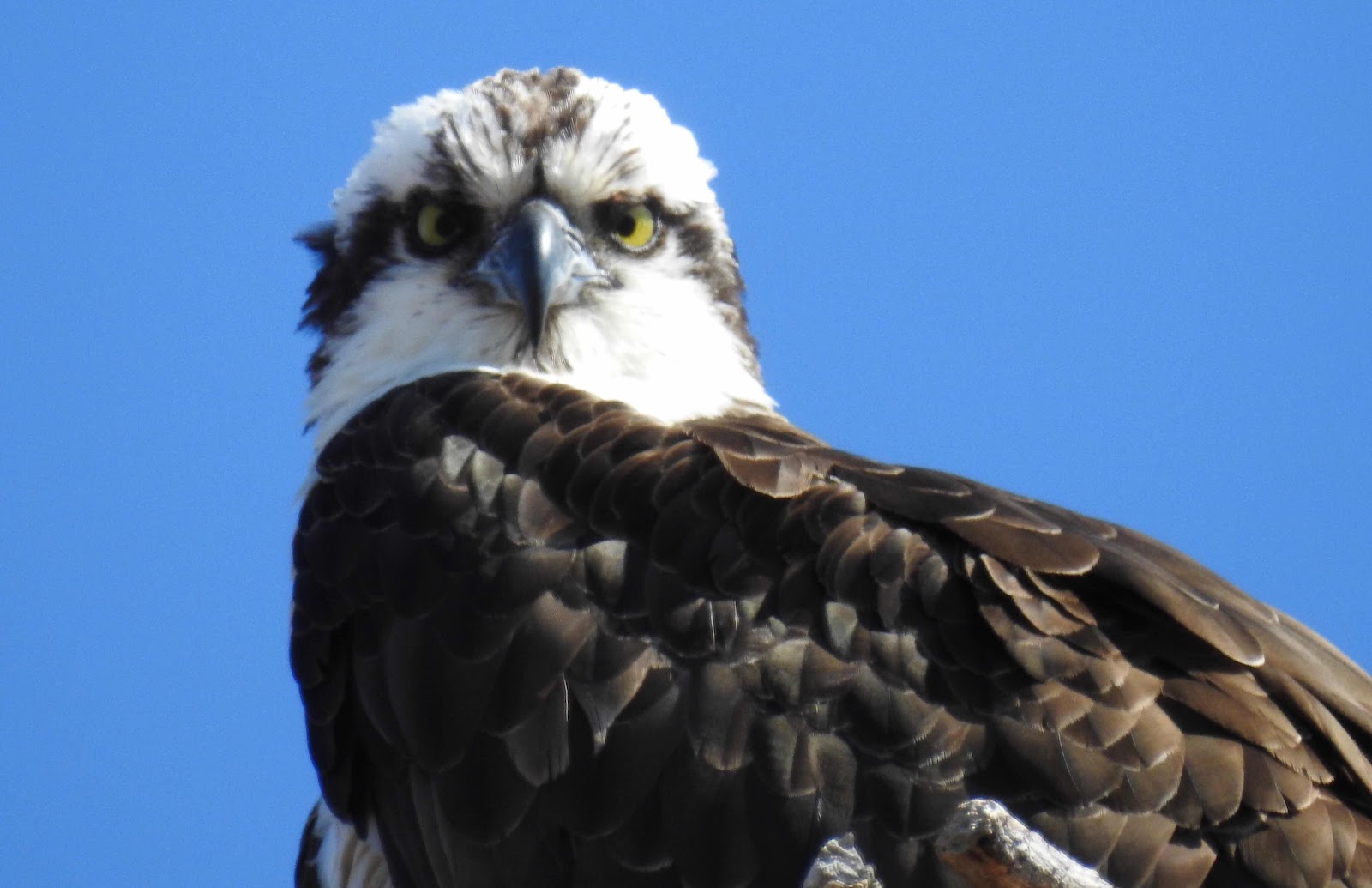 Two days later, on our way to the boardwalk we stopped again to photograph the Osprey. Three were in the nest though only two were visible. One flew off and we could see the other two. 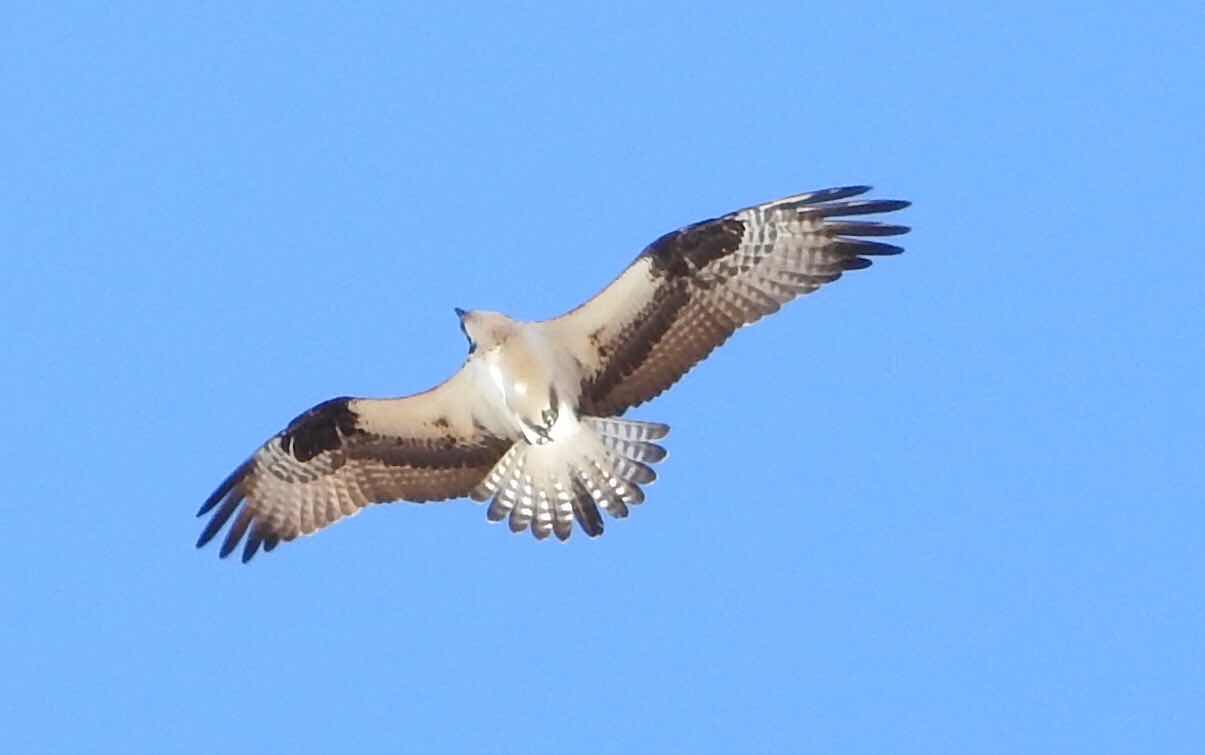 I recorded video, just 21 seconds, rather unsteadily, of the birds as one chirped and whistled.

Then it took flight. 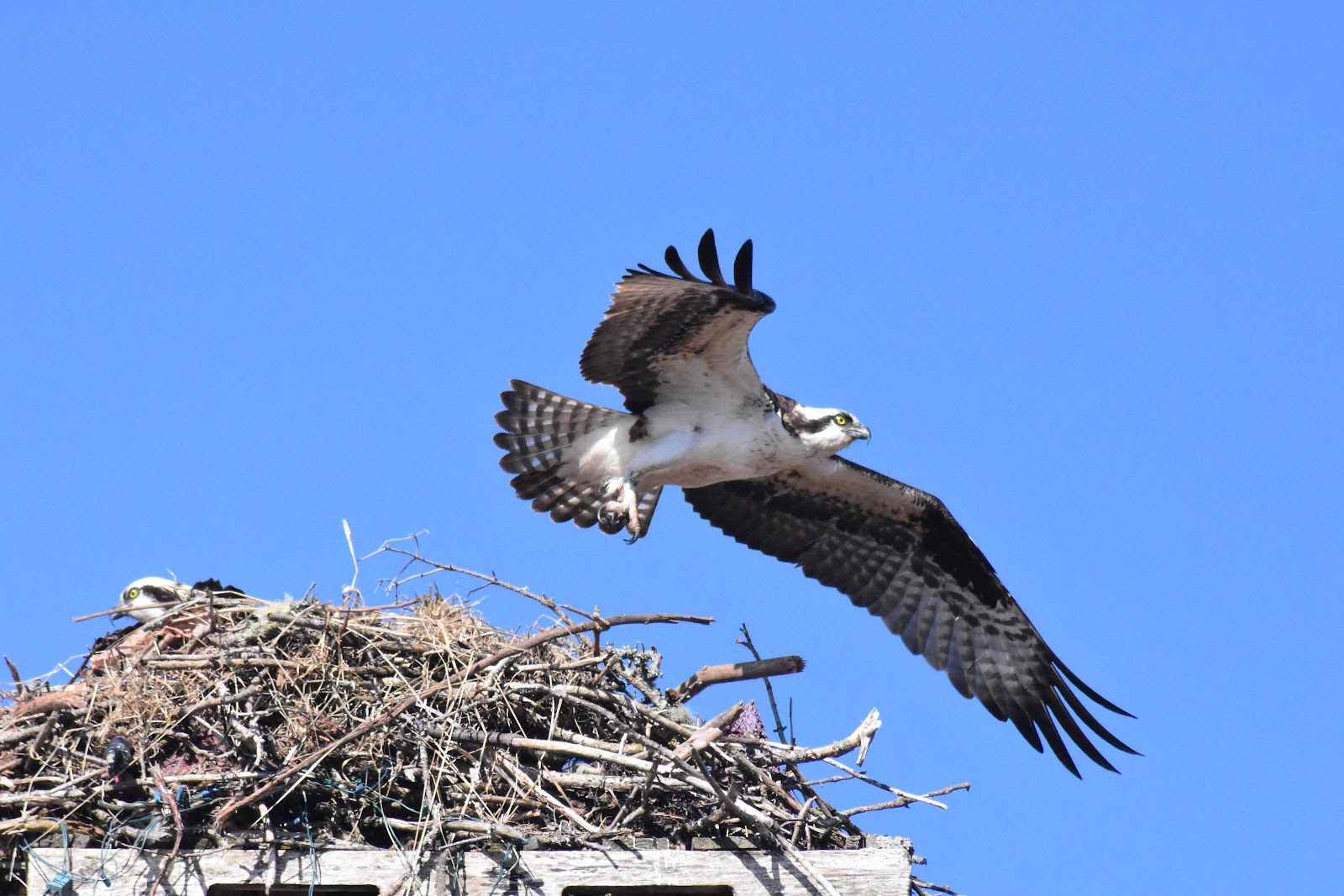 These hawks are fish eaters and their nest by the harbour is in a great location. I hope to see them fishing one day.

Posted by Marie Smith at 14:13
Email ThisBlogThis!Share to TwitterShare to FacebookShare to Pinterest
Labels: osprey

Magnificent pictures of a magnificent bird. The one from underneath in flight is really beautiful. Thank you so much for sharing these great shots, Marie.

I used to see them at cape May. NJ. They swoop to the ocean surface and catch enormous fish. Then they maneuver the fish to face headfirst before flying off to eat them. The naturalist told me they do this because it's better aerodynamically to keep up speed. Because there are midair muggings. She'd seen two bald eagles fight an osprey and seize the fish. It must have been a good one.

Boy was it ever staring straight at you! We see a pair here on Lake Eugenia.

I remember when there was only one pair of Ospreys nesting in the UK and that was right up in the north of Scotland. There are now several pairs nesting in various places thanks to a lot of help from ornithologists. Humankind can do some good things when we try.

You got some great shots! They are so fierce looking.

Wonderful! Hope the birds are successful in raising junior(s). We were lucky enough on a camping trip to see a pair trying to evict their young one out of the nest. It was not happy. It went on all afternoon into evening and then the next day all three were gone.

Wow, you got some great captures. The eyes are incredible in the 5th photo.

Wow, you are so lucky and I am so jealous. So sad though what has gone into the making of the nest. Fab photos. Take care Diane

What a wonderful sight to see. Huge thanks for the photos and for the video. I am surprised at the call - which is a lot less 'fierce' than I expected (if that makes sense). I hope they have a wonderful breeding season.
And yes, a big sigh at the materials they found to add to their nests.

Awesome Osprey photos, I always enjoy seeing them. I wish I was closer to the coast to see them here. Take care! Enjoy your day, happy weekend!

Ospreys are awesome birds. i like to see them go buy with large fish in their talons.

These are such awesome sots! I have only seen two in real life...they are such gorgeous birds. And I really enjoyed the video.

Those outspread wings are magnificent.

The Osprey is a beautiful bird and a thrill to watch.

Majestic creatures.
You managed to get some very impressive photos!!
Good job!! ; )

I wonder if they ever get cold up there. Burrr.

i found this bird a magnificent creature ,what a beauty
thank you for the video ,i could not think that that mighty looking bird has sparrow like sweet voice :)
take great care and stay healthy my freind!

It's wonderful to have them return.

They haven't had their routine interrupted.
You pics and video were good.

Wow, what beautiful birds! And how wonderful to have poles specially for them. Our local rugby teams is named Ospreys, though I'm not entirely sure why.

You are so lucky to have them where you can watch them daily. I have only seen them once and was amazed at how "tame" theY seemed to be … people ogling them didn't seem to faze them at all. GREAT PHOTOS.

My God Lady!! These pictures are magnificent. And so are those birds!!

Wow!Such great shoots of the Hawks!

i think ours have returned too, i have not seen them. one day we will go for a ride and check the nests that we know of!!

your video and images are awesome, i really enjoyed both. we are having rain today, so it was nice to be outdoors, if only for 21 seconds!! great job marie, i hope you are safe and happy!!!

We also have osprey nests in the area but they are on ledges that stick up out of the ocean and far enough off shore that close up photos are impossible. However, the bridge towers also have nests, at the top. We can see the hawks on the nests when they are standing up. It's hard to snap a photo while traveling across the bridge and stopping isn't allowed. Your pictures are great!💖

Wow! Beautiful photos of the Osprey!