One of the many things I love about Prince Edward Island is how the land and the sea are entwined in the lives of the people. While the sea separates us from others, it is a focus of life here as it provides food and a source of income as islanders harvest the sea in a sustainable way. The sea also lures us to its shores to play on the beaches and in the waters which lap the shore. 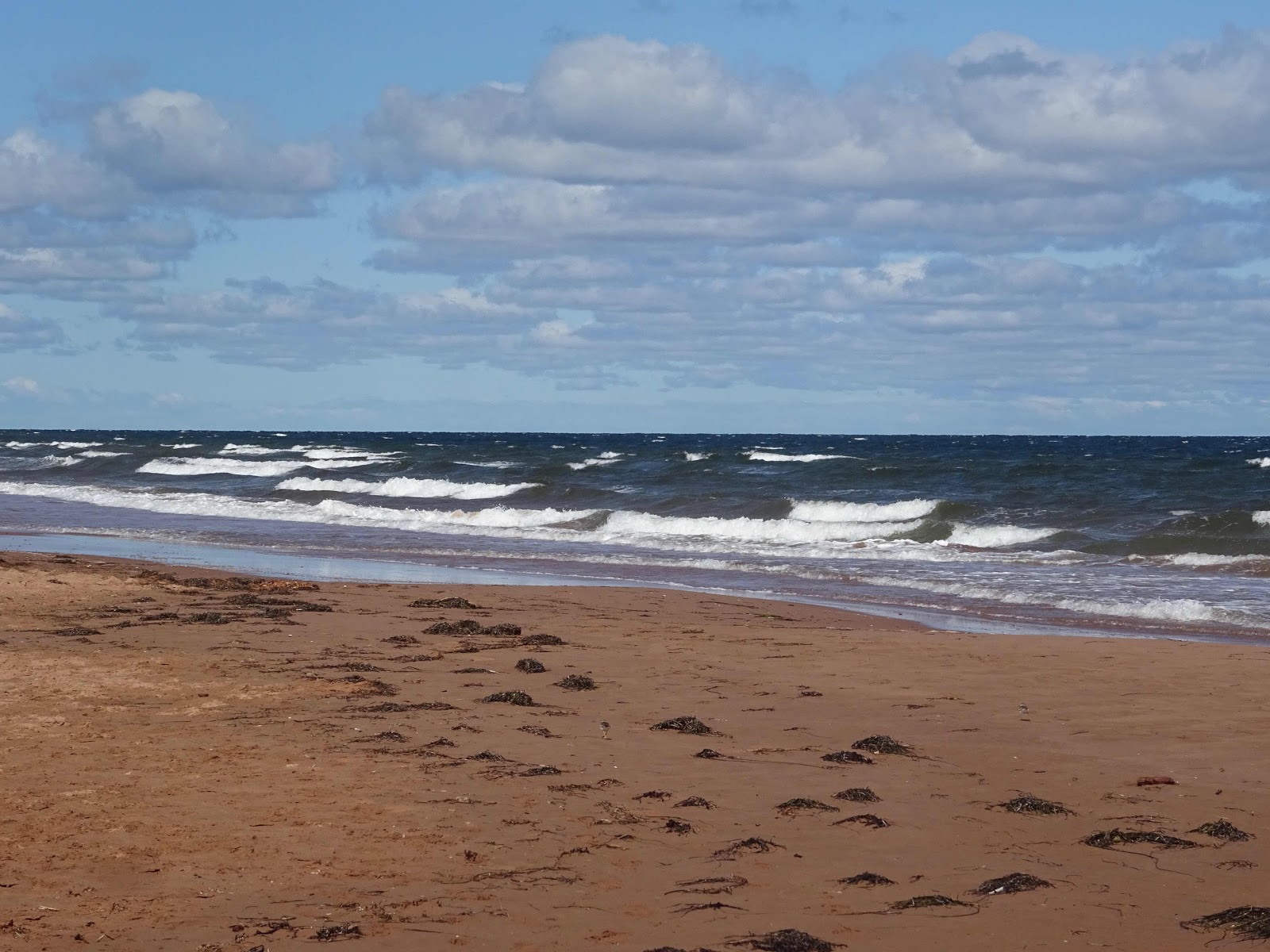 On this island, farmers’ fields drop into the sea as the rich red soil supports agriculture. 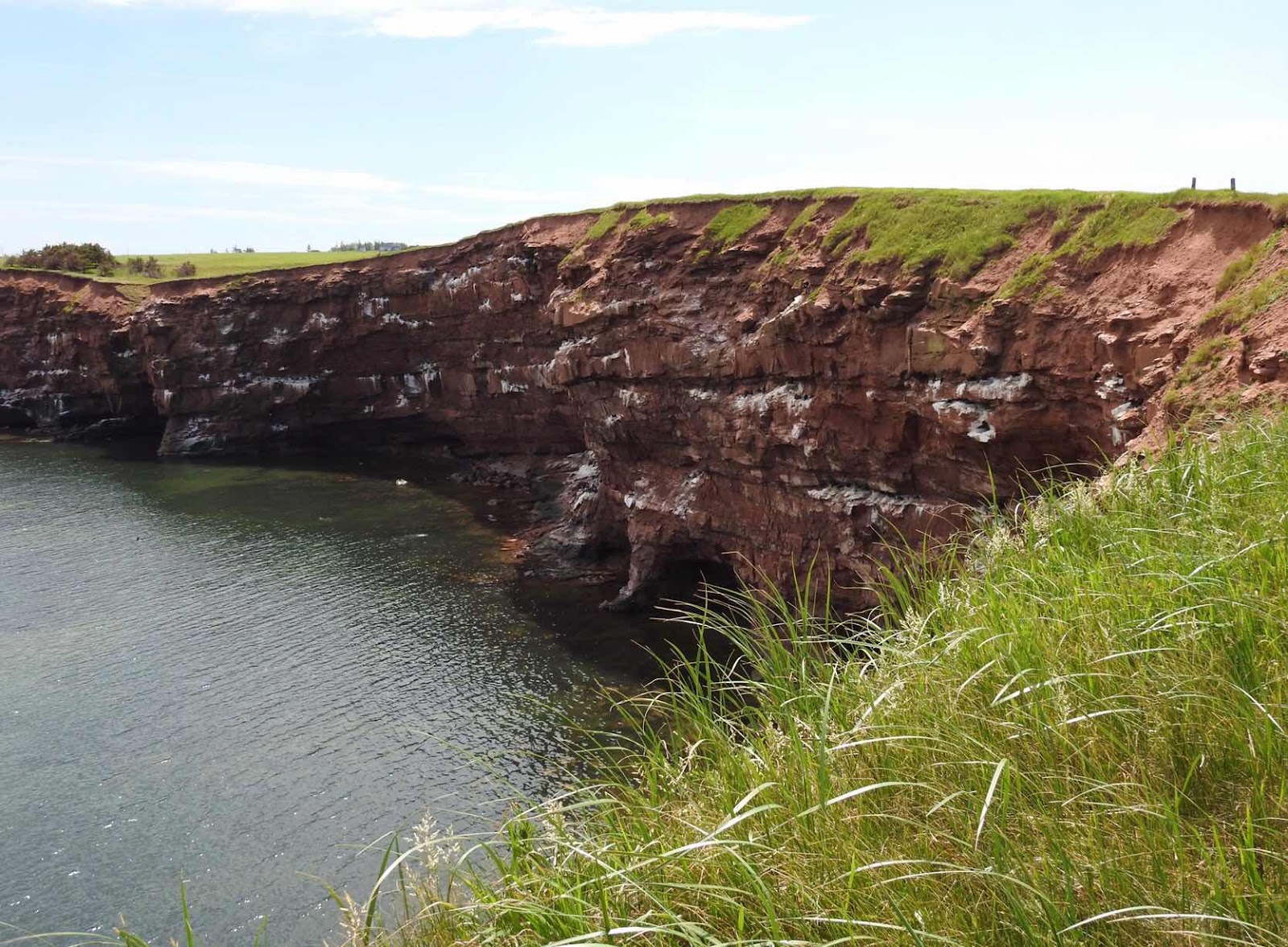 Animals are part of that life too including cattle, dairy cows, horses, sheep, pigs, chicken and others. The land has supported farming for centuries as the original settlers cleared the land and planted vegetables and raised animals. Today, potatoes are the largest crop.

This connection of land and sea was evident last week when my husband and I stopped at Seacow Pond on the north coast of the island. The lobster fishery which normally begins at the end of April has been postponed until May 15th. There is concern for the safety of crews and their ability to social distance. Also, the markets are gone since restaurants aren’t open though that will change over the next few months. 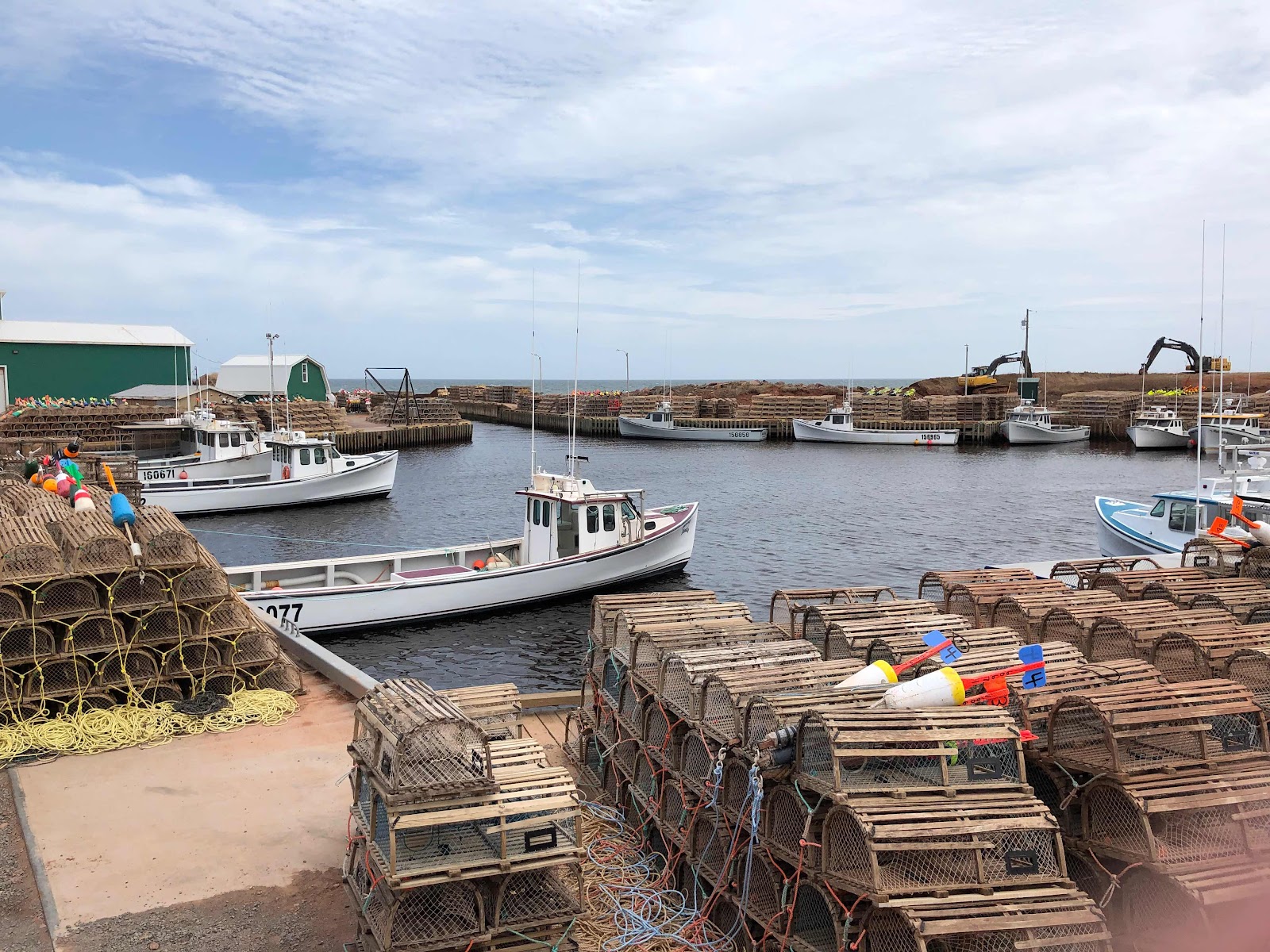 Fishers are preparing for the start of the fishery and traps are ready to be loaded aboard the boats, the colourful marker buoys ready for their sentinel duty with the lobster traps. 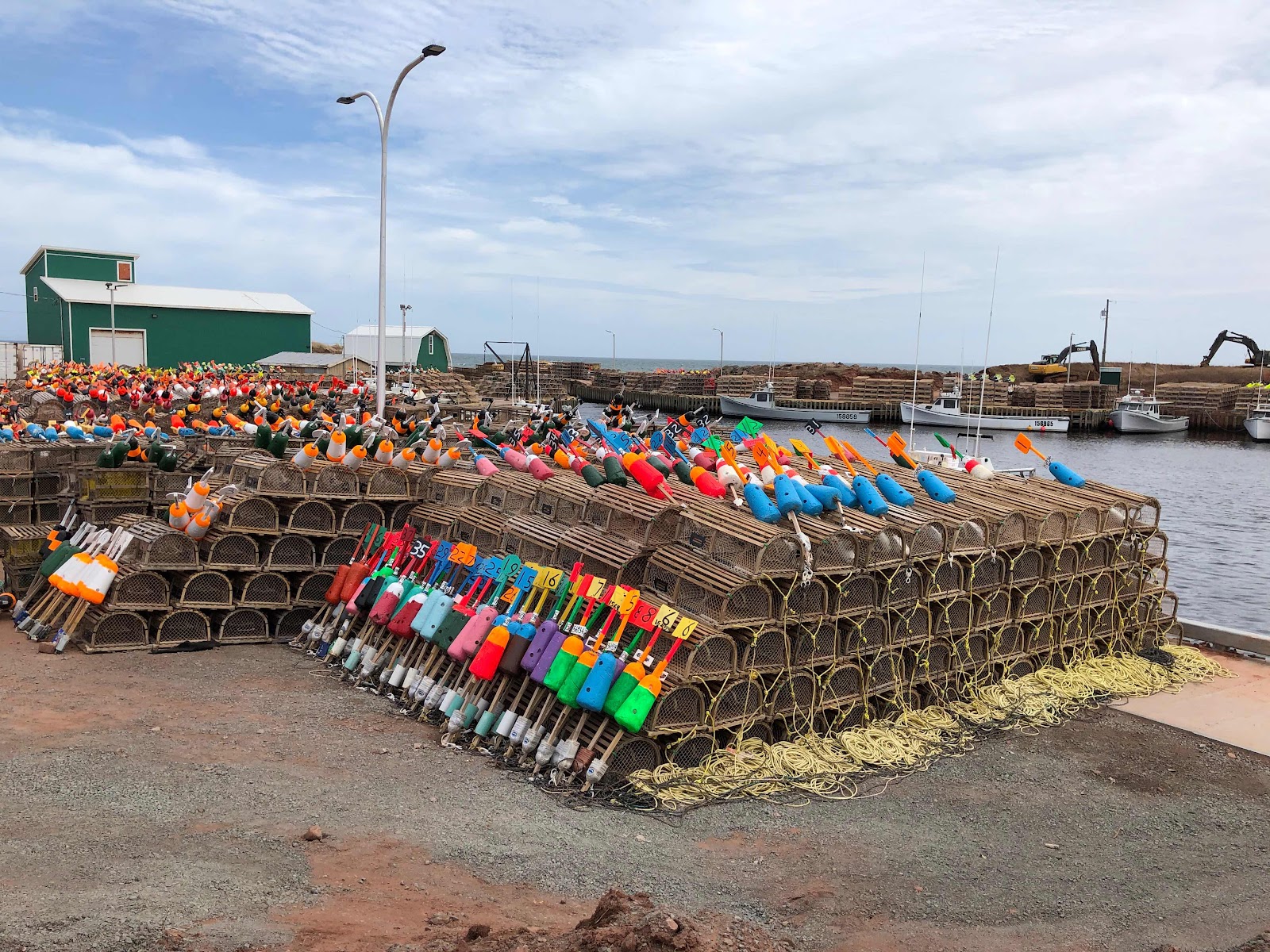 As we looked over boats at Seacow Pond, just over our shoulders two horses walked around a pasture which will soon turn green. 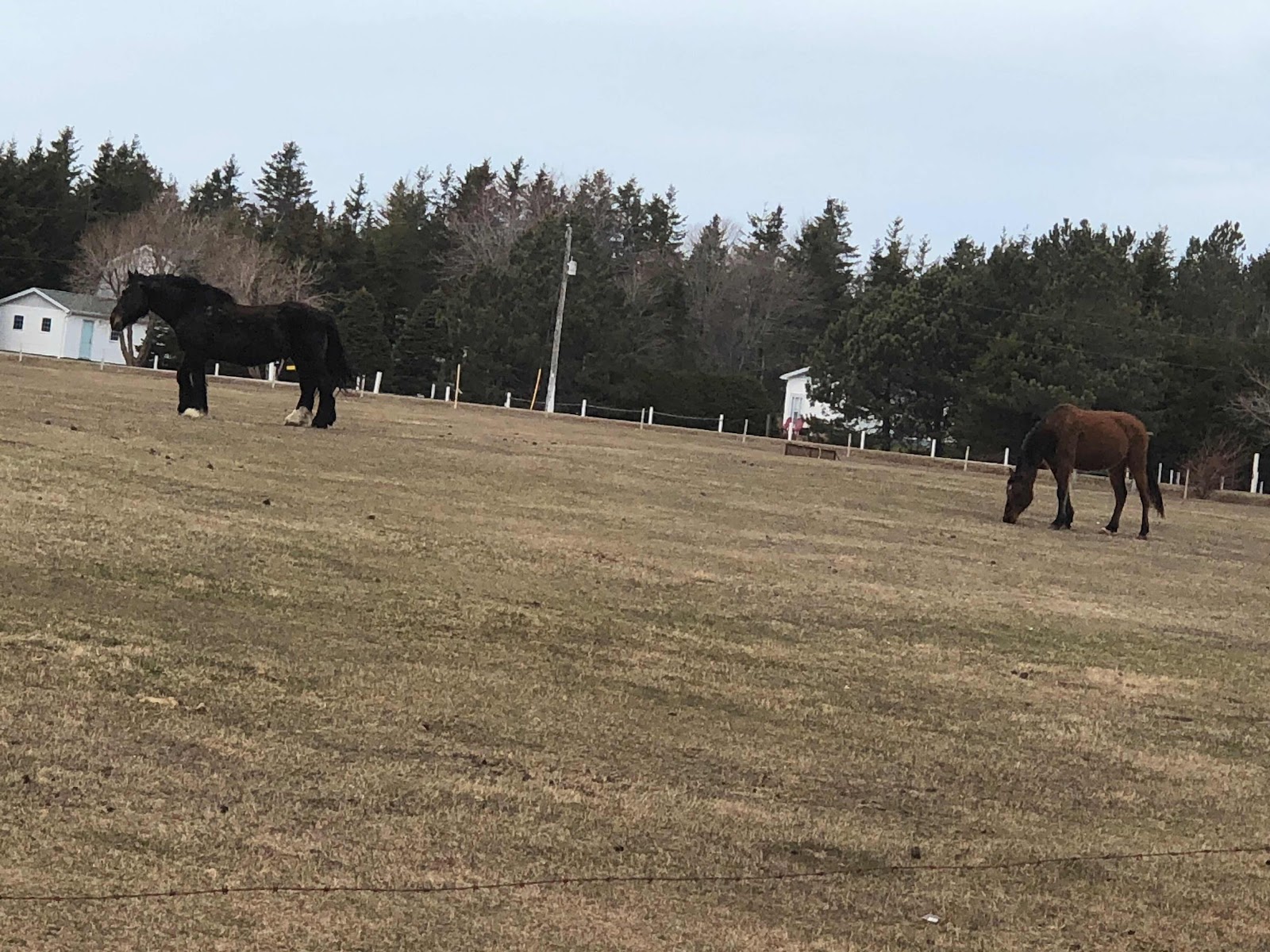 In the distance fields will be ploughed for another crop in rotation.

Island life embraces spring in spite of the pandemic.

Before I found your blog, potatoes were the main thing I knew about PEI. You've really enlarged my knowledge. And your photography is just so good.

Not too long then Marie, the 15th is just around the corner. Hopefully there is a way for the island's fishing industry to safely get up and running once more ✨

Lovely post! That photo with all the marker buoys is just stunning. One of the most unique photos of a maritime port that I have seen. It looks like it will be a busy day on Friday and the weekend in that port!

Thanks for that fascinating insight into life on your Island. Yes, whatever is happening in human lives, Nature goes on as it always has. The seasons change, the tide goes in and out, the sun still shines (even if we can't see it!). Take care, Mxx

You live in a remarkably beautiful place, and I love your pictures, especially that gorgeous one of the waves coming in contrast to the red sand. :-)

I love the colourful buoys and the horses!

Oh Marie, your Island Life is so lovely. Thank you for taking us on a tour of it.
I especially like the lobster traps and buoy photos.
Very magical.
Sue

Beautiful photos, they do tell a nice story along with you words.

In many ways life must go on and it does. It may lobster traps where you are and around here it is the farmers tilling the soil and planting the grains.,

i like the colorful marker buoys, around here, they are all faded and unattractive!! everyone is getting ready for spring, i am hoping we can follow along!! your images are really pretty, you live in a lovely area!!

In a small area you see what is going on and get a feeling for the Island life.

I love seeing all the pics related to fishing and lobsters...hope you take more as the season progresses and they are coming and going. The horses are beautiful

I so enjoy visiting your blog. It's like taking a tiny vacation--and I'm learning so much about PEI! Thank you. :-)

I have fond memories of a lobster supper on PEI.

You do live in a beautiful place, I love the view of the sea and cliffs. The shot of the colorful buoys is cool. I love the horses.
Lovely series of photos. Wishing you a happy day!

Buoys are great and the horses.......enormous! I love how the islanders are connected to the land. So very foreign to me but lovely.

It was interesting to me the difference in the traps and buoys from those of our fishermen here in Maine. They now use wire traps and Styrofoam buoys. I miss seeing the original wood ones. Thanks for a lovely post.💖

That's interesting how people have been so connected to the land and sea there for so long. It makes me feel better that things like that aren't changing during everything that's going on. It just feels like some part of life is still normal, and the rest of it will be one day, when seasons change and things bloom and grow just like they always have.

Beautiful photos and lots of colour. Hope all is well Diane

Such lovely thoughts and pictures Marie. The island is such a lovely place year round, but yes, such beauty abounds in springtime. Hoping that the lobster fisherman can get back to work soon!

Love these photos and the information you share Marie! I love to learn things about PEI. It's fascinating to learn about how people make a living there and how everyday lives goes. Thank you!

Such beautiful photos you have shared. I hope you have a blessed weekend. Mildred

Nature labors for men indeed dear Marie and ask in return only to follow her rules :)

Majestic images ,this is intriguing how life is proceeding on island through odds

So much to see, to appreciate, to be thankful for...
Great post... as usual!

Love that image with all the colourful markers!