When our daughter is working night shifts, we take the golden grand-dog, Georgie, for a few days. She loves any walk but especially those on the boardwalk where there are lots of dogs and other animals.

Georgie especially enjoys the squirrels and chipmunks. She stands firmly to watch them with a look of intense interest, head lowered. It is not easy to take her away from them. 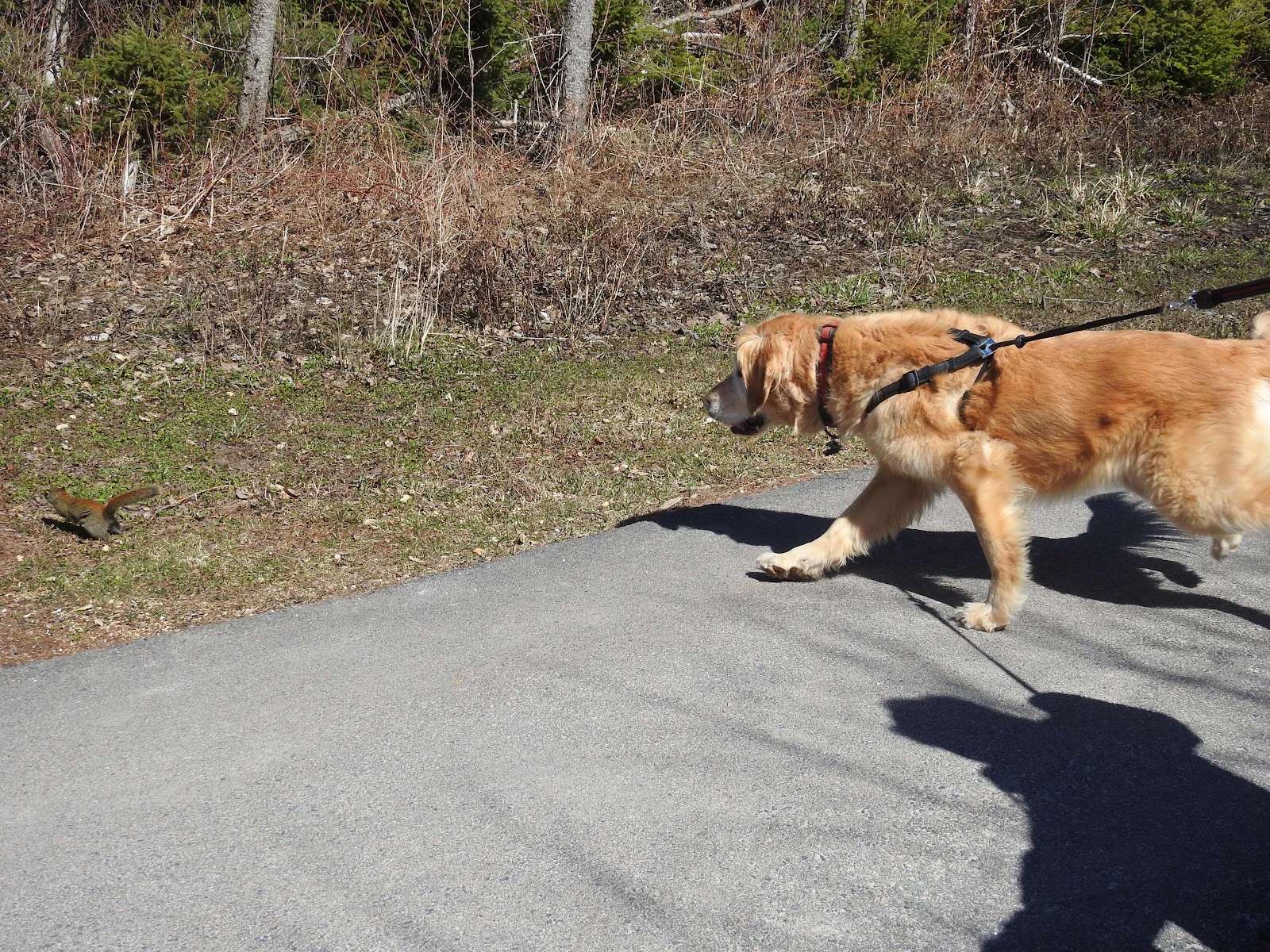 During a recent squirrel encounter, the little rodent teased Georgie. It was high in a tree but came down to the base of the tree and approached her. 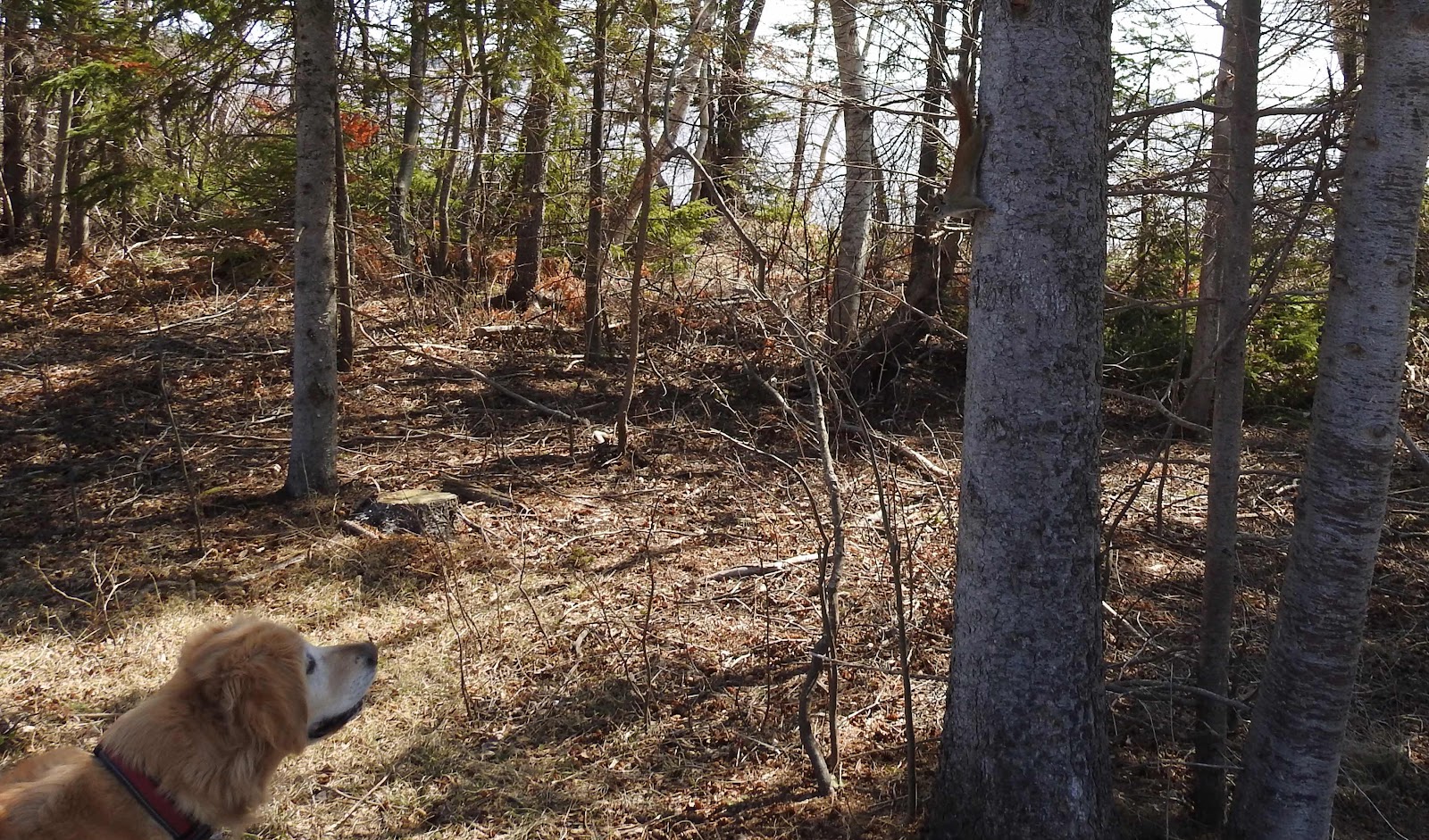 Can you see the squirrel coming down the tree?

When Georgie pulled on the lead to move towards it, 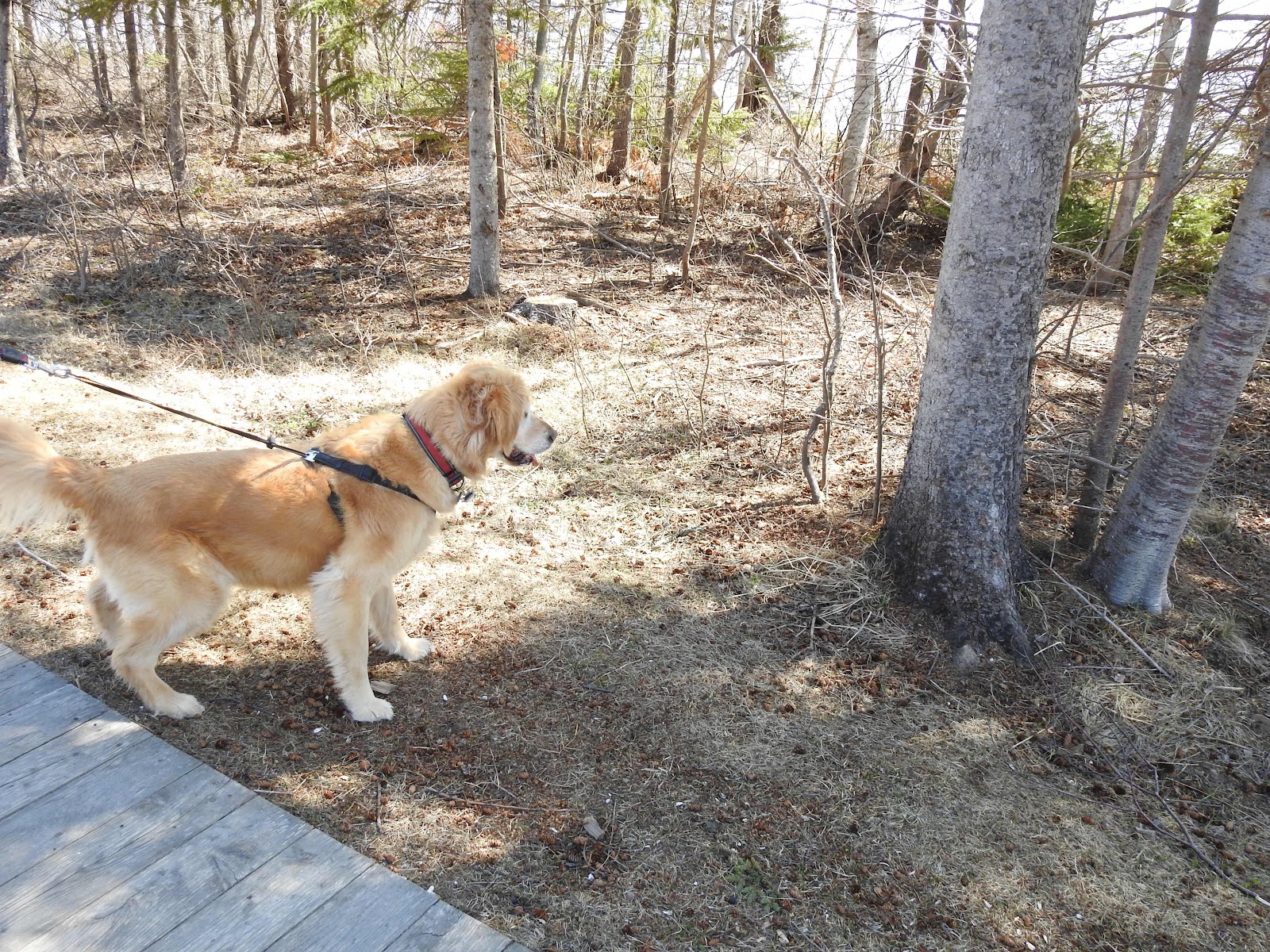 the squirrel scurried up the tree and sat on a twig to look down at the dog again. It repeated the behaviour a second time. 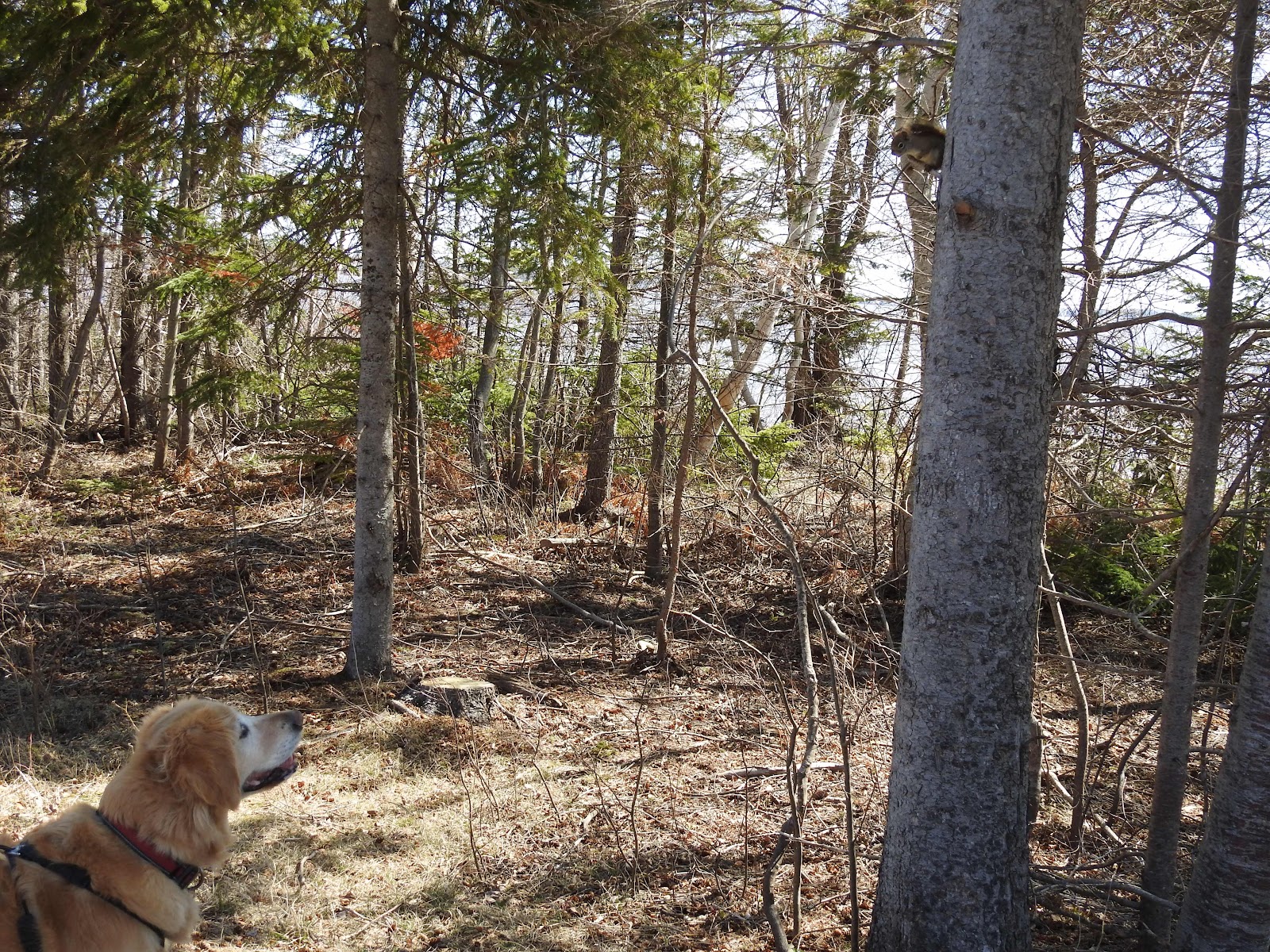 The squirrel appeared to understand the dog could not reach it and didn’t mind approaching. You could almost hear the furry little critter saying, “Na-na, na, na-na. You can’t catch me,” as it looked down from on high.

The world would be a sadder, lonelier place without animals.

asked about the red sandy beach in the last post titled Relief. 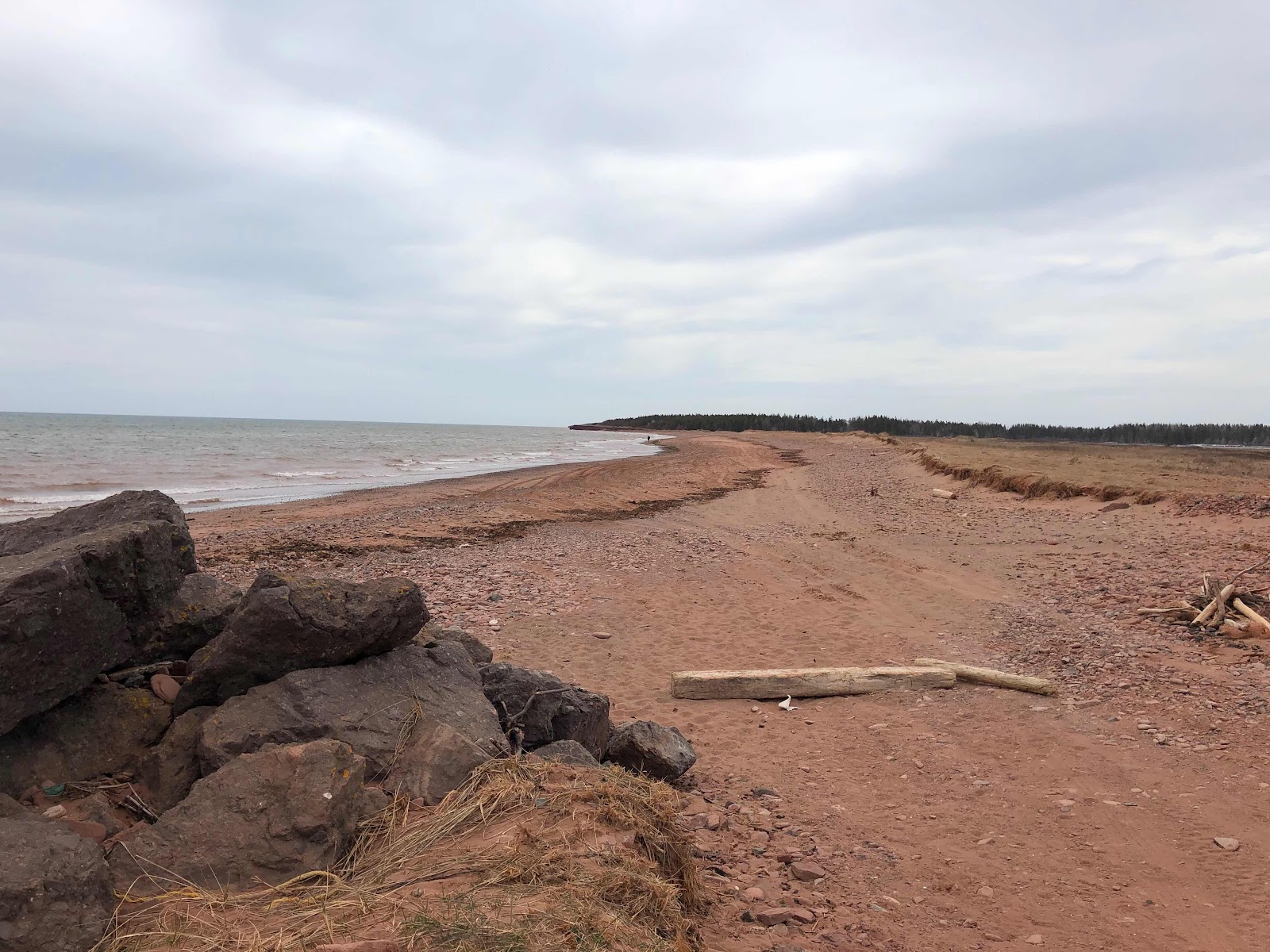 The soil and sandstone on Prince Edward Island are rich in iron. Exposure to air results in oxidation, creating the red coloured iron oxide or rust.

There are some beaches on the island where the iron oxide is washed away by the wave action in that area. One such example is the beach at Greenwich, Prince Edward Island, part of the National Park. 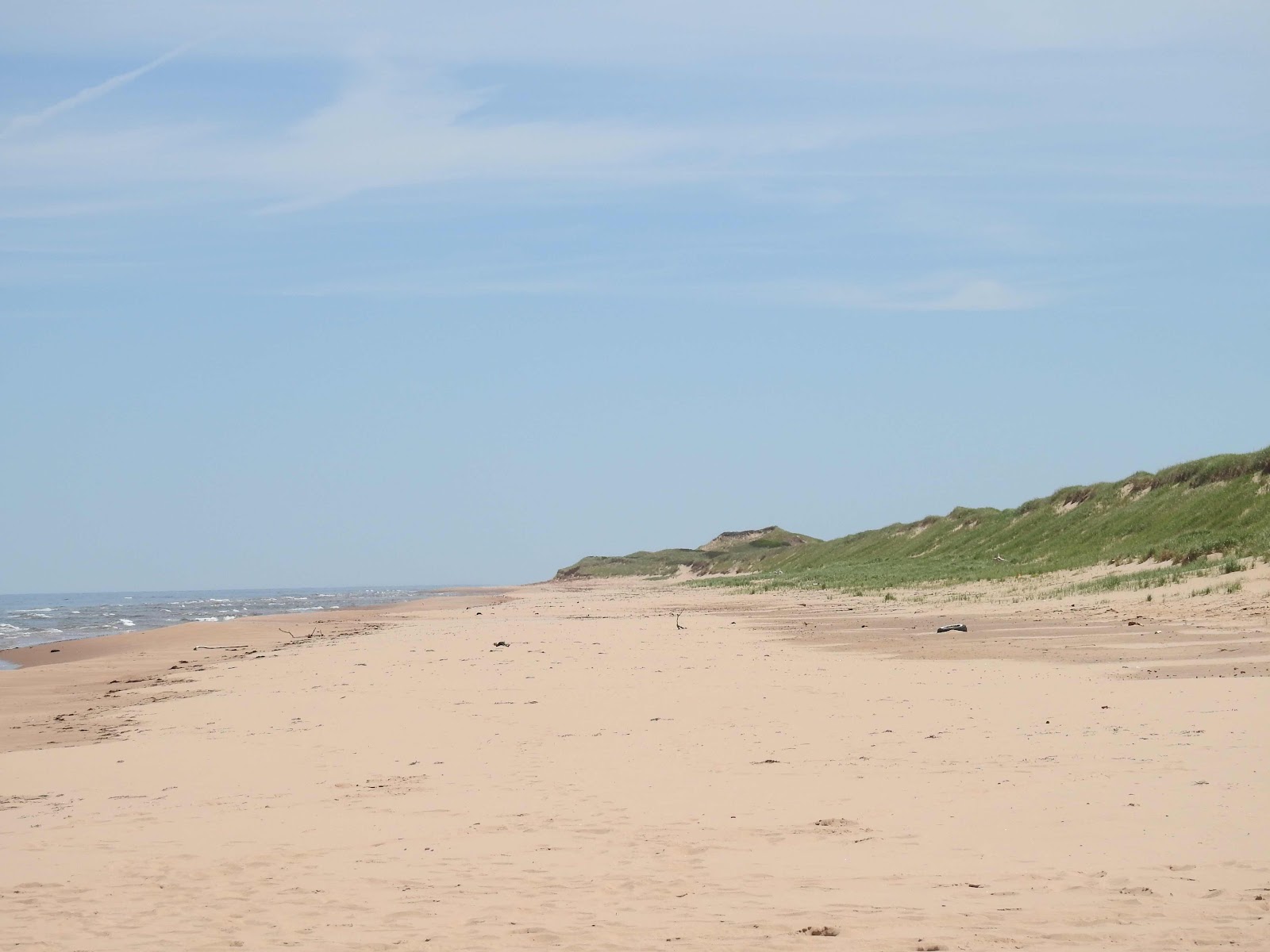 Those little tree-rats love to tease dogs! They know that they are so much faster than any dog. And who ever saw a dog climbing a tree in pursuit of a speedy tree-rat?????
Lots of squirrels around here, very bold and brassy.

My sister has a dog that actually occasionally catches squirrels and shakes them until they are dead. I couldn't believe it, but apparently all the dumb squirrels are gone now and no longer is he successful. I love seeing Georgie out and about. :-)

Squirrels are so smart and goldens pretty easy to troll! Some of the nicest people I've known have been goldens.

Thank you for the information about the red beach and the kind link, too. I've looked up pei and found a lot of great info about it, since reading your blog. You've enriched my life!

So nice to get out for a walk. You're lucky to have that boardwalk nearby.

Oh that cheeky squirrel 😊 Interesting about the beaches Marie I should have recognised that because even though our beaches are mostly white, I remembered the beaches waaay up north in Port Hedland the beaches are red for the very same reason.
P.s the tree did survive 😊

Funny story, Marie. Reminded me of when our dogs used to try a catch a squirrel. Of course the squirrel was way too fast. We used to call the squirrel, Mr. Squirrel and years later when we asked her where Mr. Squirrel was, she would jump up and look out the window. :)
You're right, we definitely need animals in this world.

Our lives would indeed be poorer without animals.
Thank you for both the smiles and the information crammed into this post.

So lucky for Georgie and you to have time with each other occasionally. It's fun to watch the behavior of animals both domestic and wild.

I think squirrels get a profound sense of pleasure from teasing a dog. i have watched that so often when we lived in the country and had a dog.

That is interesting to know about the iron oxide...and Georgie and the squirrel remind me of our old dogs and Mama Squirrel. One of our dogs would have snatched her up too quick to talk about, and she would get just on the other side of the fence to tease Keesha. However, our other dog just paid er no mind and could be laying out there, and Mama Squirrel would walk up and smell her feet, or get a drink of water out of the bowl of water.

The world would be a much sadder place if we didn't have our animals to make us smile :)

There are a few words that make our pups dance and walk is one of them. Breakfast is another and then for the bigger dog, Wiggy, she has a Bryan Adams song that each time she hears it, she comes running and starts to dance.

The world most certainly would be a sad place without animals. Sadly with the amount of poaching going on, I wonder how soon that just might come about.
Keep well Diane

Whenever I think of PEI I have visions of red beaches. It is synonymous with the island.

Squirrels seem to love to tease dogs. It drives Duke nuts! That's great that Georgie gets to stay with you while your daughter works nights. I can't imagine life without animals.

That squirrel has pazazz. So does Georgie.

You are so right about animals - without them this world would be so much less in everyday.

the pictures of georgie and the squirrel are priceless. the sand/earth is pretty either way!!

Georgie is so cute, seeing these photos reminds me of my old Goldie Girl. She is missed. Our dogs did not like squirrels in their yard.
Have a great day!

Animals are so funny! What a squirrel. lol

Thanks for sharing this. I had no idea about P.E.I.'s iron-rich dirt beneath it. :-)

What a cheeky squirrel. Husband likes to tell of the time there were two squirrels in a tree - um doing what comes naturally - when they fell out, right in front of George. He was so amazed he just stood stock still.

You have beautiful beaches around you. The squirrel is so naughty to tease the dog. Squirrels visit our yard which interests my dog greatly.

What a pesky squirrel.