The national park on Prince Edward Island has three sections. We visit the western portion of the park most often but enjoy the other areas too. We recently visited the central area which runs along the eastern Gulf Shore Parkway from Brackley to Dalvay. We cycled the distance, stopping regularly to take in the sights.

This area has abundant wildlife and a variety of birds are in and around the saltwater marshes, rivers and ponds just behind the dunes. Cycling along the parkway, one can see the birds and stop to observe them. We stopped a great deal. 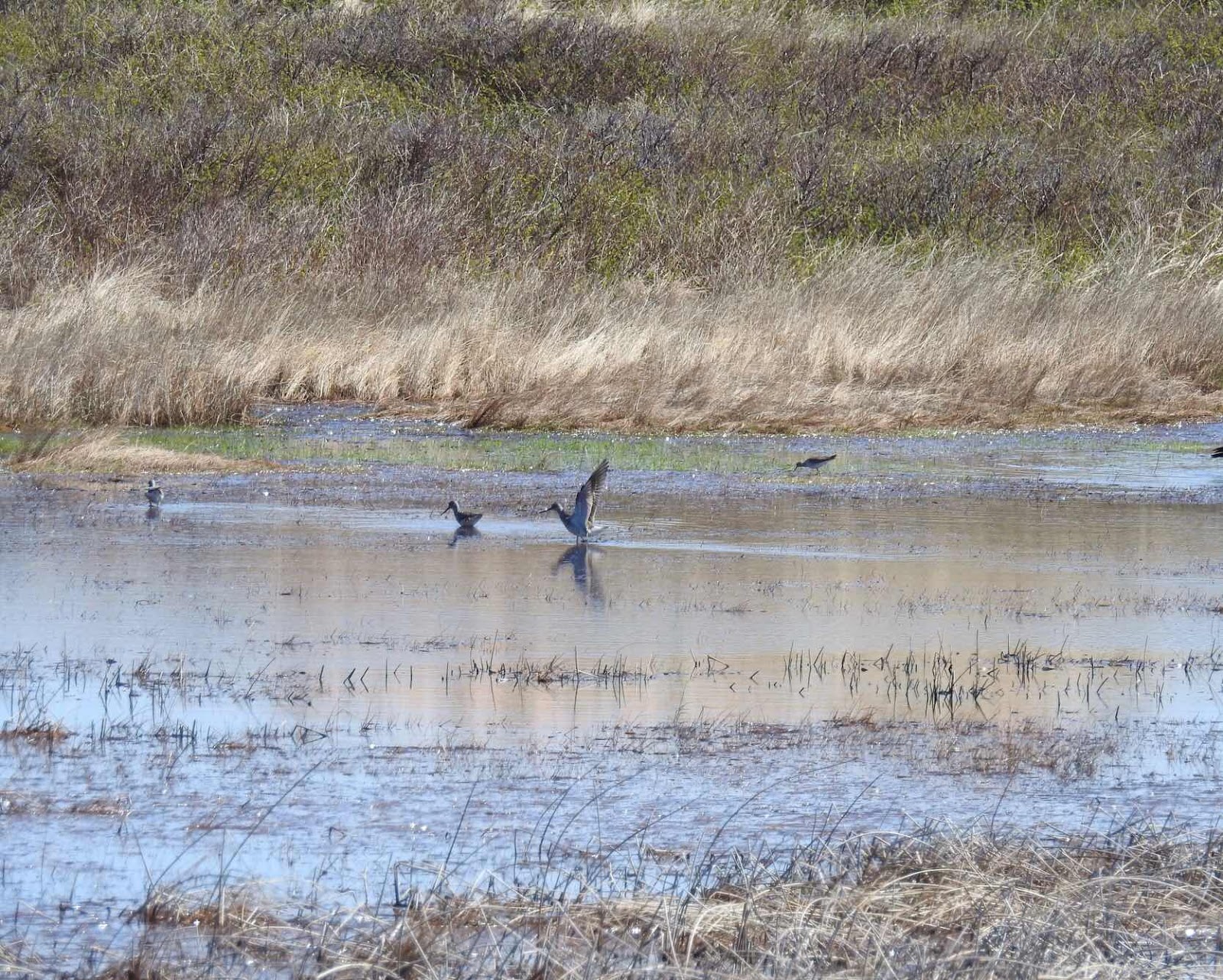 The soft spring colours around them highlight the Greater Yellowlegs in the first photo and the Gadwalls, a female and a male, in the second photo, just left of centre. 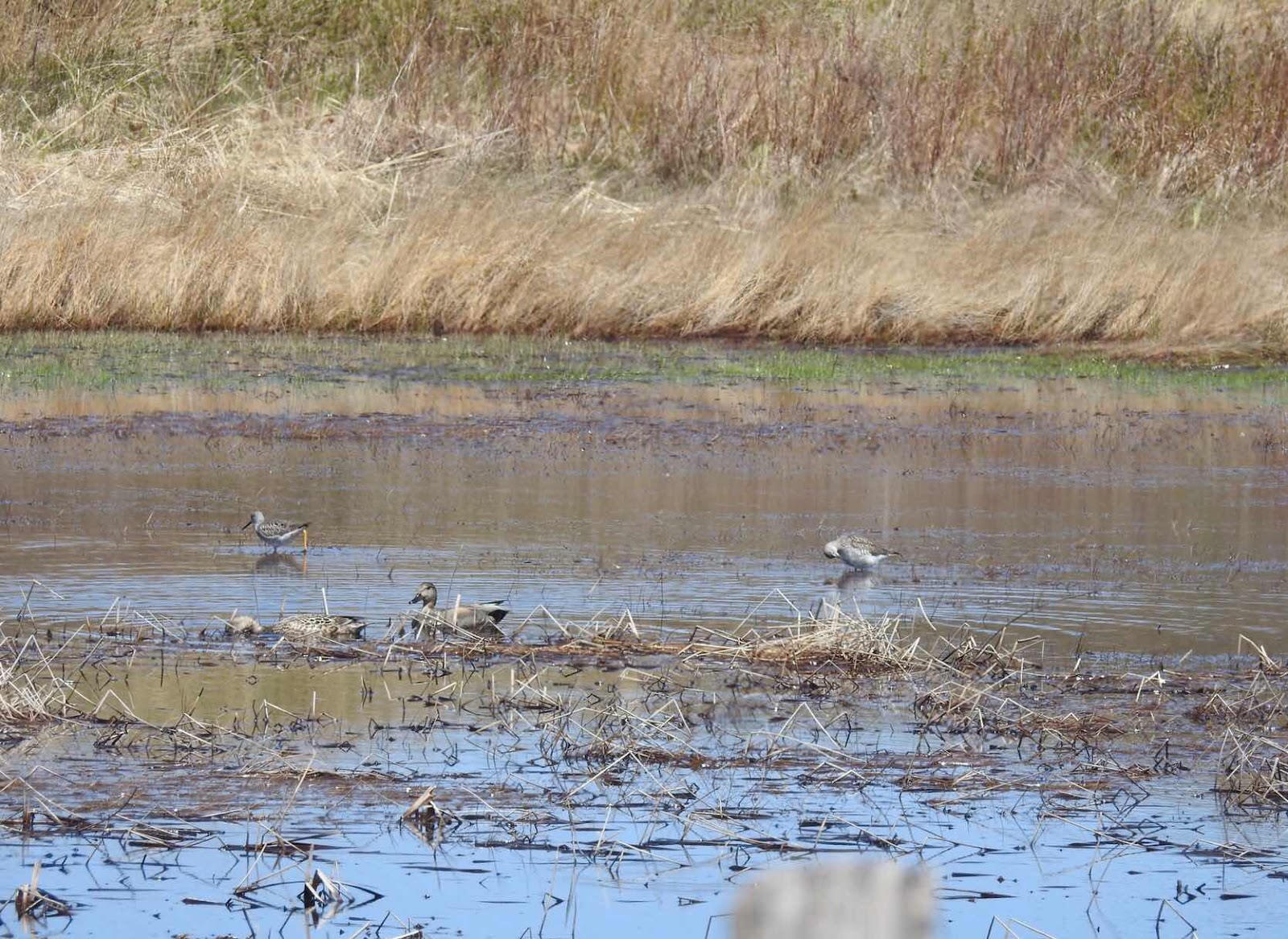 While I was waiting for my husband at one point, two geese flew a few metres overhead. I was lucky enough to photograph one. 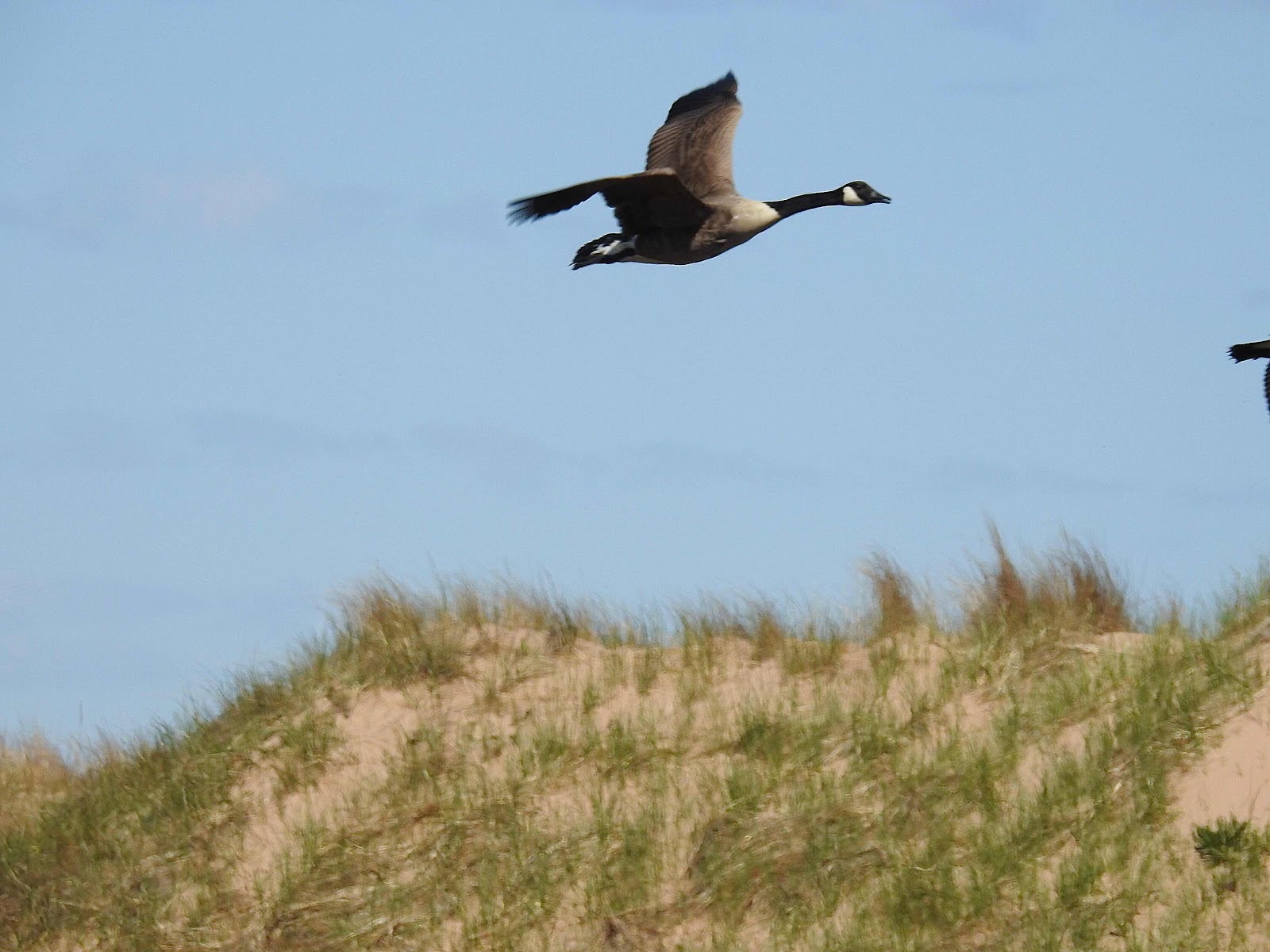 A Northern Shoveler stood out among the dried grasses 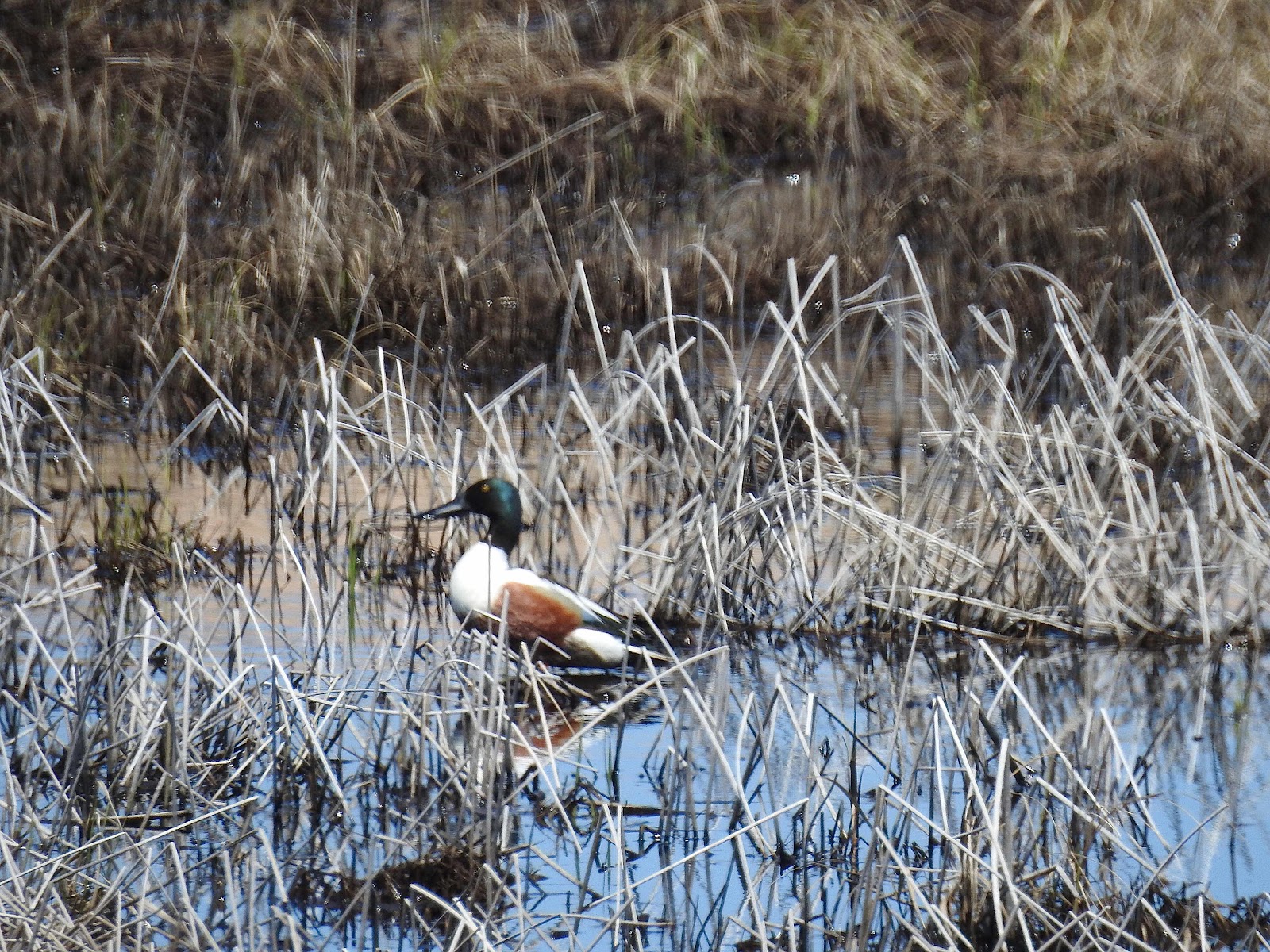 while a tiny Least Sandpiper was easy to miss. 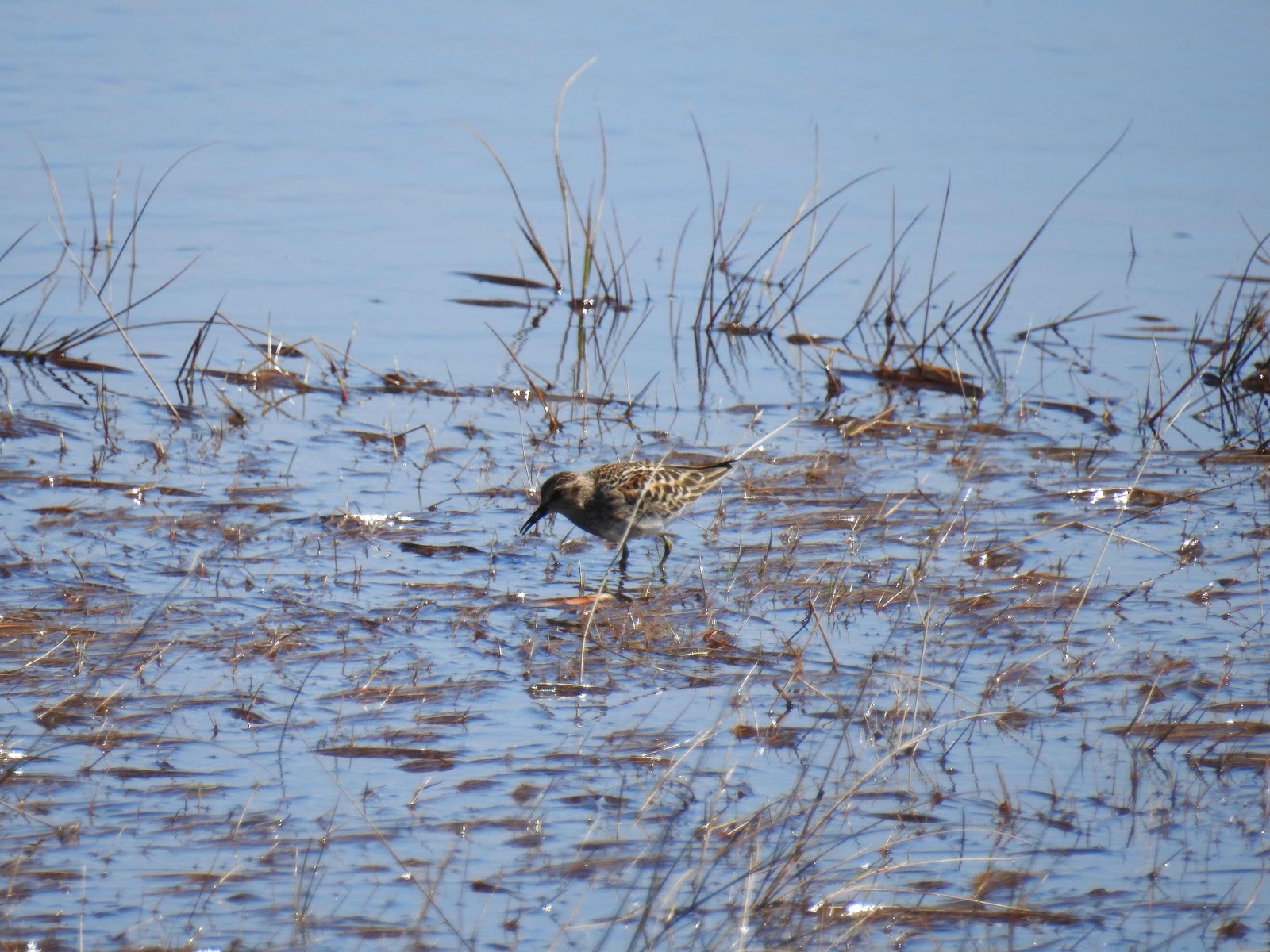 This beautiful Green-winged Teal looks shy floating around in the pond. 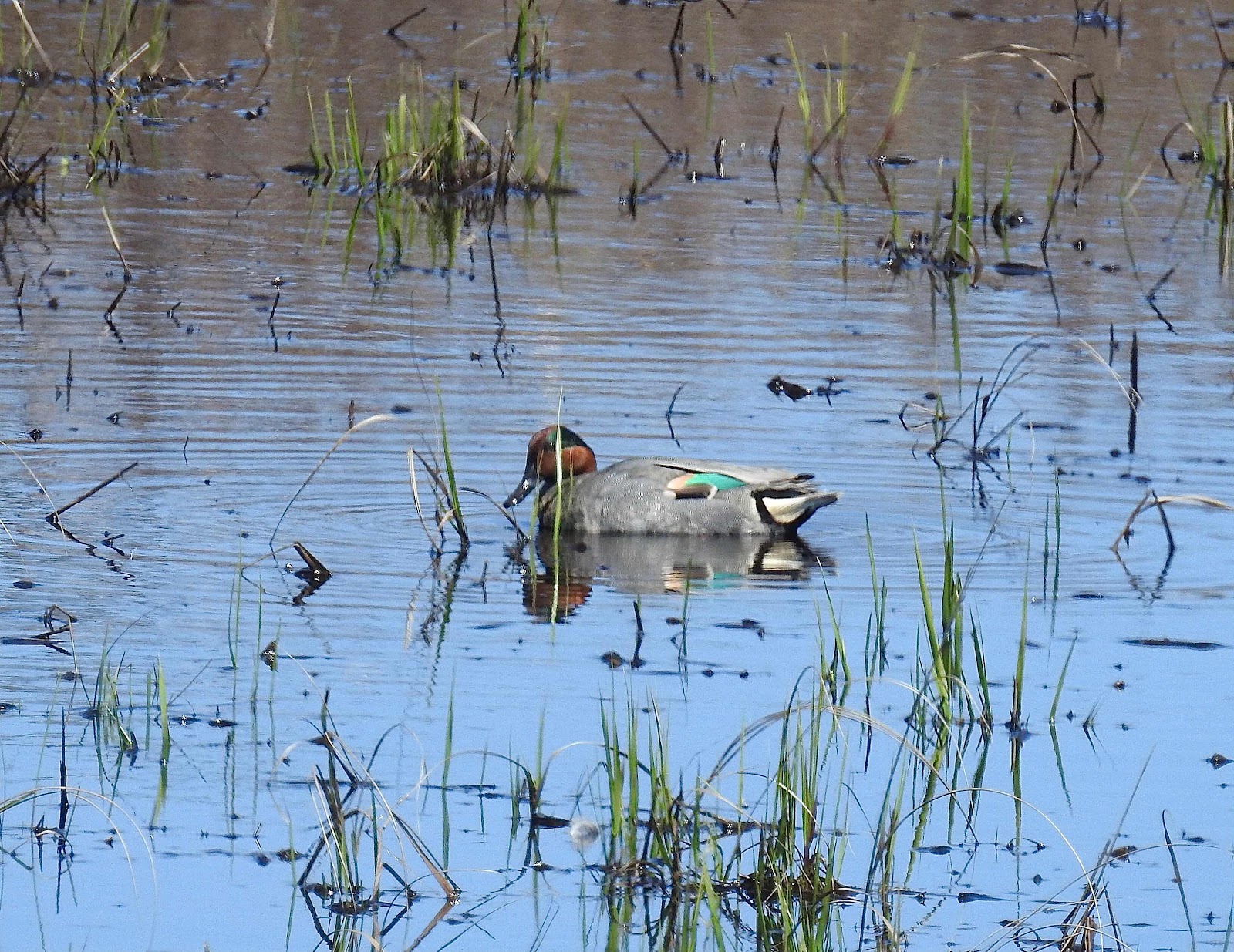 We had lunch in a sheltered spot where a White-throated Sparrow dropped by. 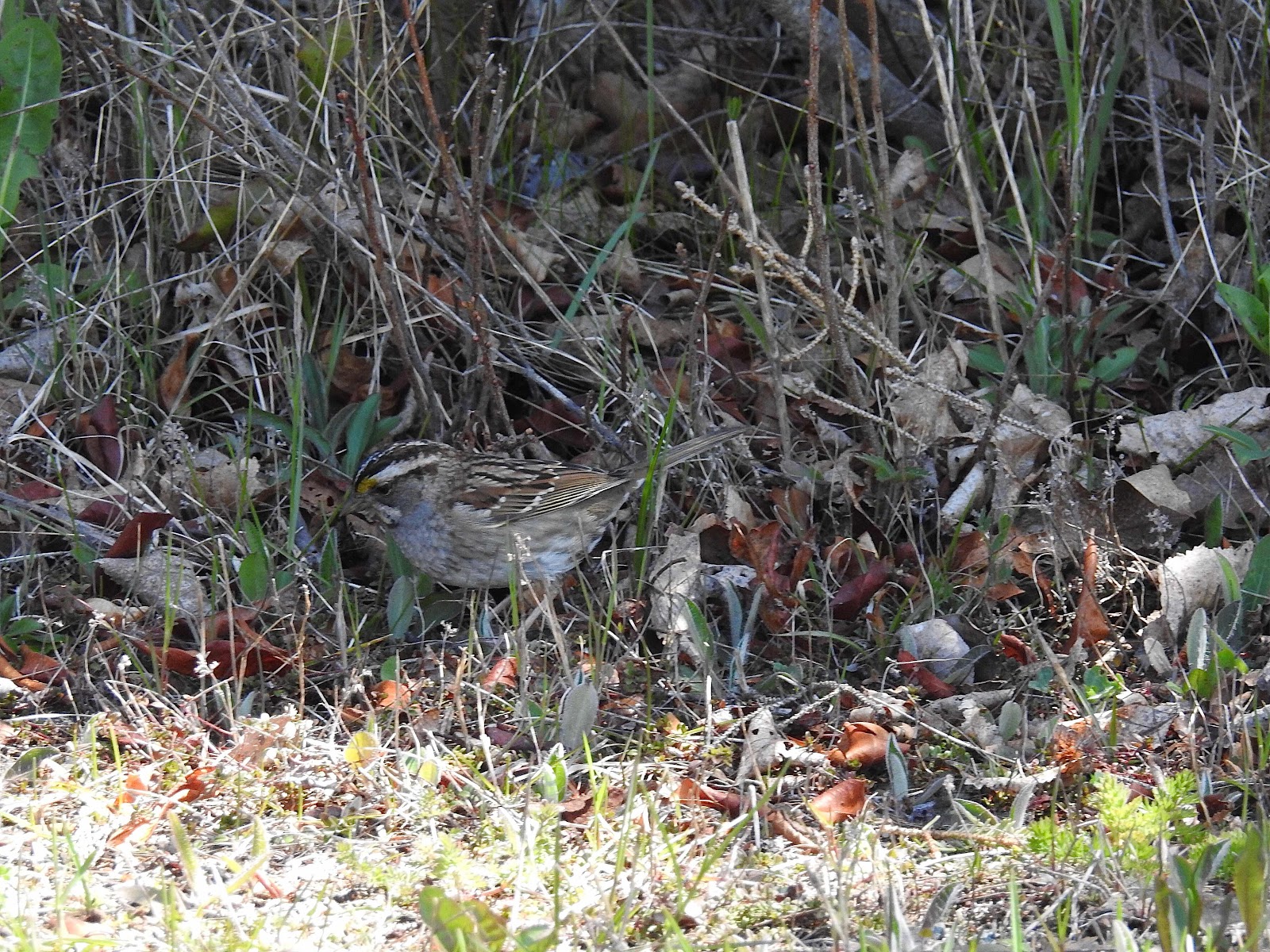 Looking out to sea, one sees the lobster boats in the distance, 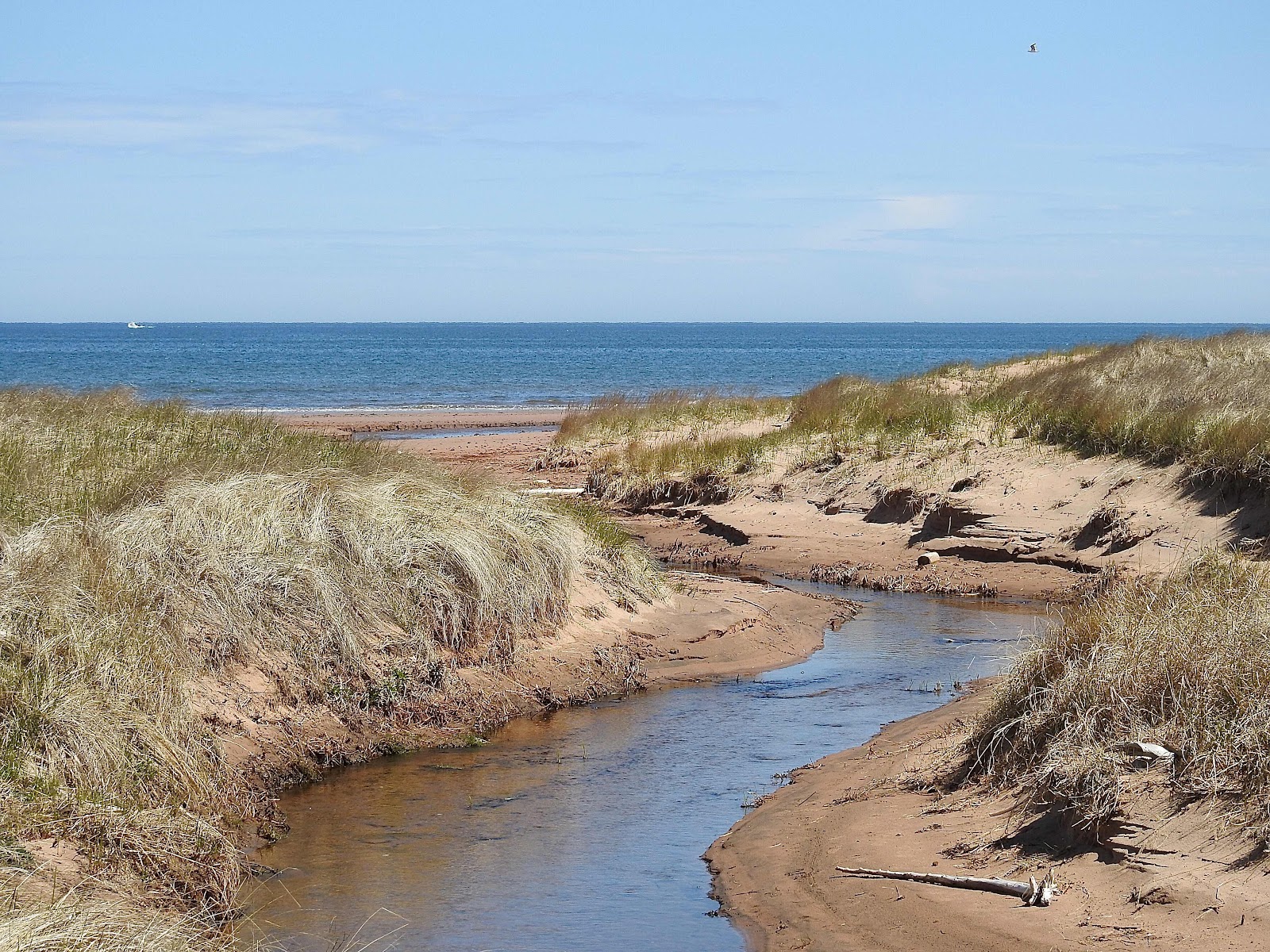 the sound of the motors carried on the breeze. 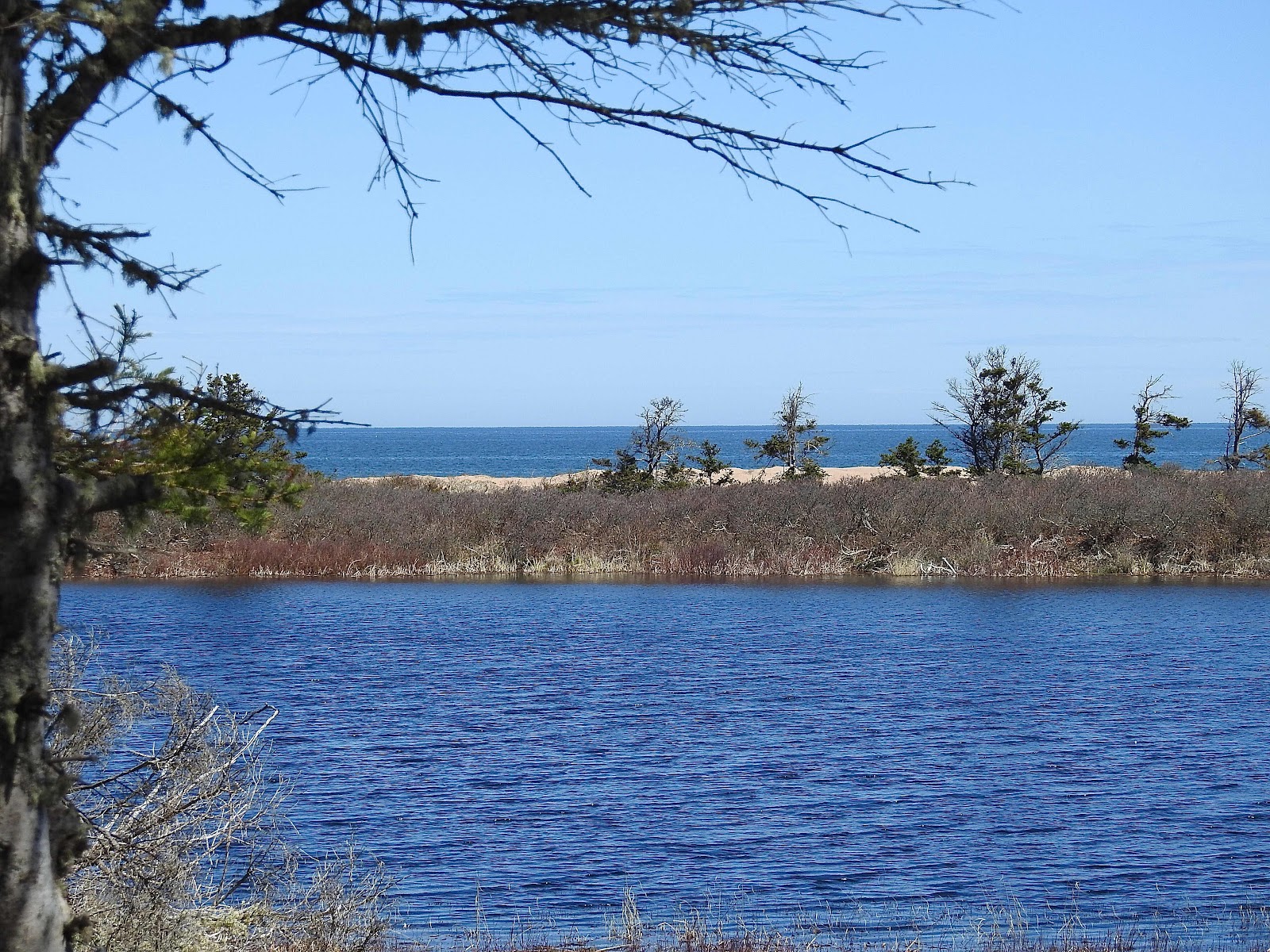 The lighthouse keeps a silent vigil as it has for decades. 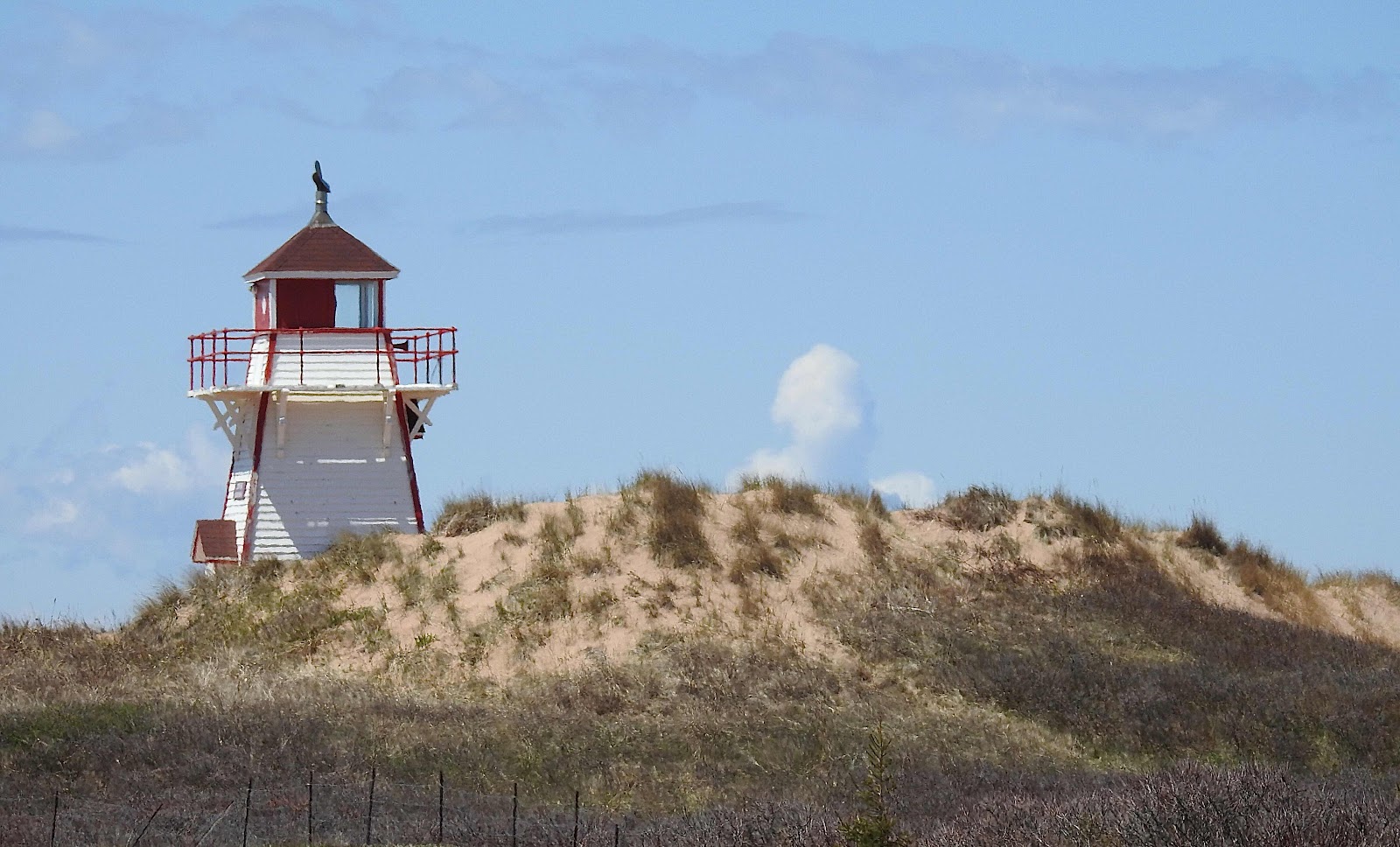 This area of the national park will draw us back numerous times this year. 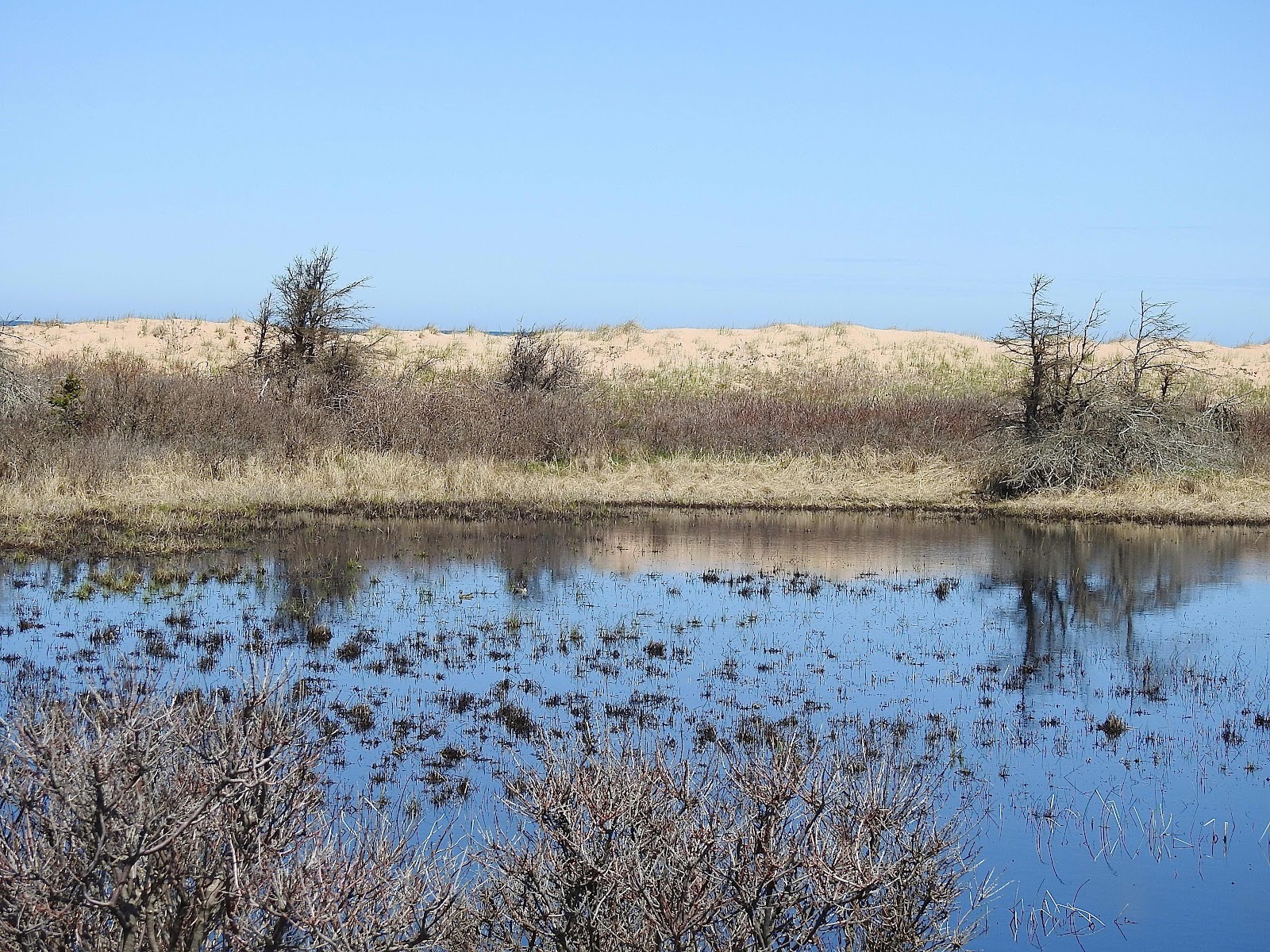 A bounty of wonderful birdlife for you to enjoy. The lighthouse is one of my favourite on the island.

Beautiful views of the sea, the birds and the lighthouse.
Take care, enjoy your day!

What a wonderful array of birds, well captured with your lens. I enjoyed coming along with you on your ride and look forward to many more. :-)

Nice shot of that Canada Goose in flight!

Such a variety of fowl to enjoy. I don't blame you for wanting to return many times.
Love the lighthouse with the puffy cloud beside it.
I always enjoy your blog posts.
Sue

So beautiful nature photoes!
ilove those sea birds-Most be wonderful to hear them sing!

You go on such wonderful outings. Thank you (so much) for taking us along.

Beautiful shots of the birds. I love the bird in flight, you captured a great one.

Thanks for sharing your rides with me. Seeing all the birds would be a highlight for me.

Glorious Marie. So glad you know who they all are and can share them with us.

You live on a very beautiful island.

Nice pictures, as ever.

Enjoy all of your rides and visits.

I see Canadain geese lives all over place. Not always Canada, I saw flock of them today in grain field.
Coffee is on and stay safe

Well done, Marie. Any time you can combine cycling for your physical health, and birding for your mental and intellectual well being, you have had a great day.

Oh yes, I like the green-winged Teal. It's all so wonderfully empty and beautiful.

You've captured beautiful photos of the birds in the park. What an amazing place to cycle. Your post makes me want to go cycling if we ever return to PEI.

Great set of photos and a lovely day out by the look of it.

A fun adventure, where we rarely have anything like this. It would be wonderful to be in a place like this, I would love to feel it

your capture of the green-winged teal duck is so much better than mine, but none the less exciting! this looks like an awesome day out!!

i always enjoy seeing the lighthouse!!

Love the capture of the goose in flight - excellent. What a lovely outing - looks like beautiful weather.

A VAST ,TRANQUIL and stunning place to visit and witness the water birds :)

Beautiful photos, the green wing tipped is so delicate with the aqua feathers, gorgeous