Picnic at the beach

On the way to another favourite beach for a picnic, we watched a farmer doing some adjustment to the plow he pulled behind his tractor. This time of year is busy for the people who grow our food. 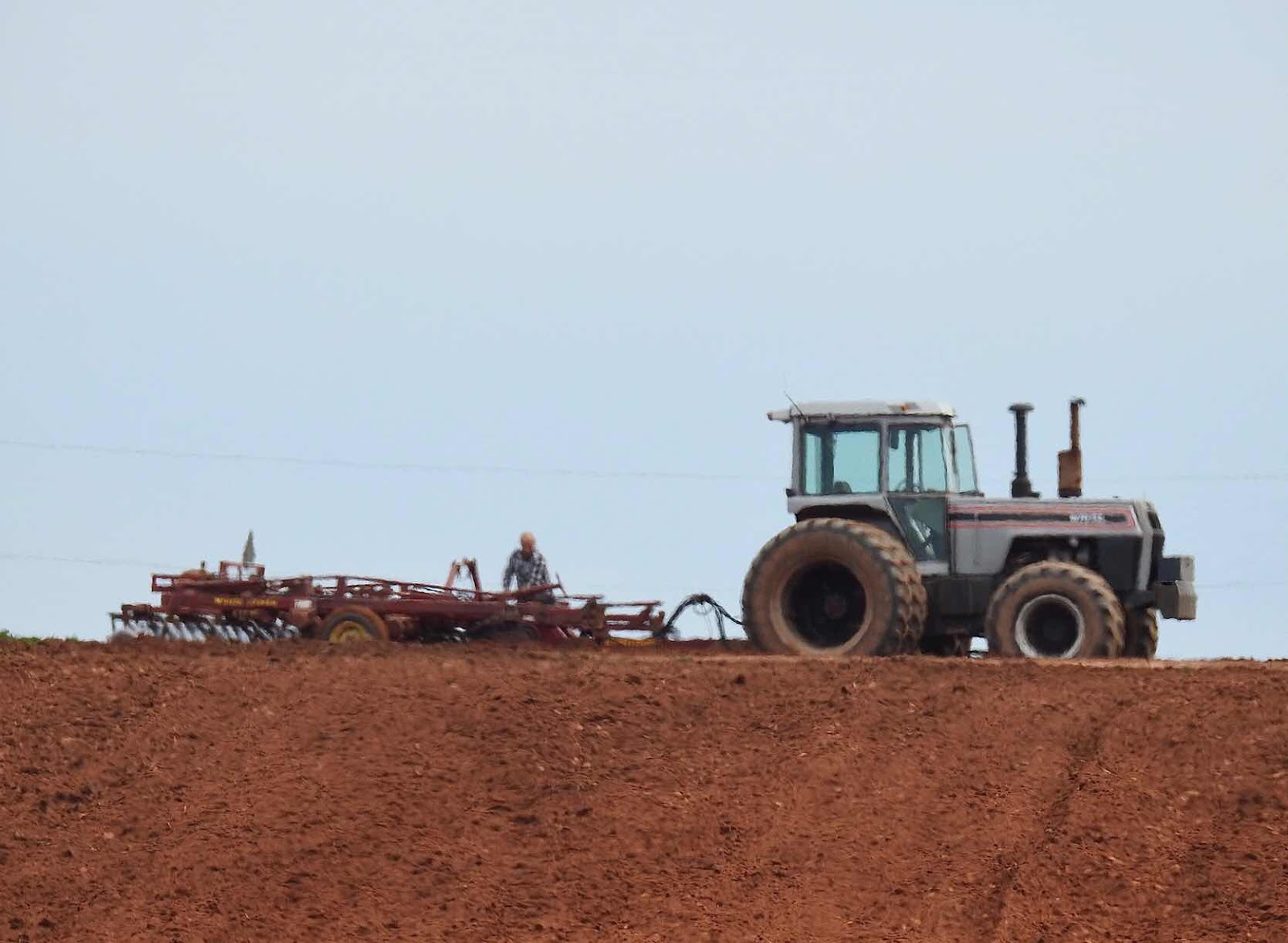 We stopped at French River as well to watch the boats coming home and spotted a female Belted Kingfisher in the trees watching the shoreline. She was a beauty. 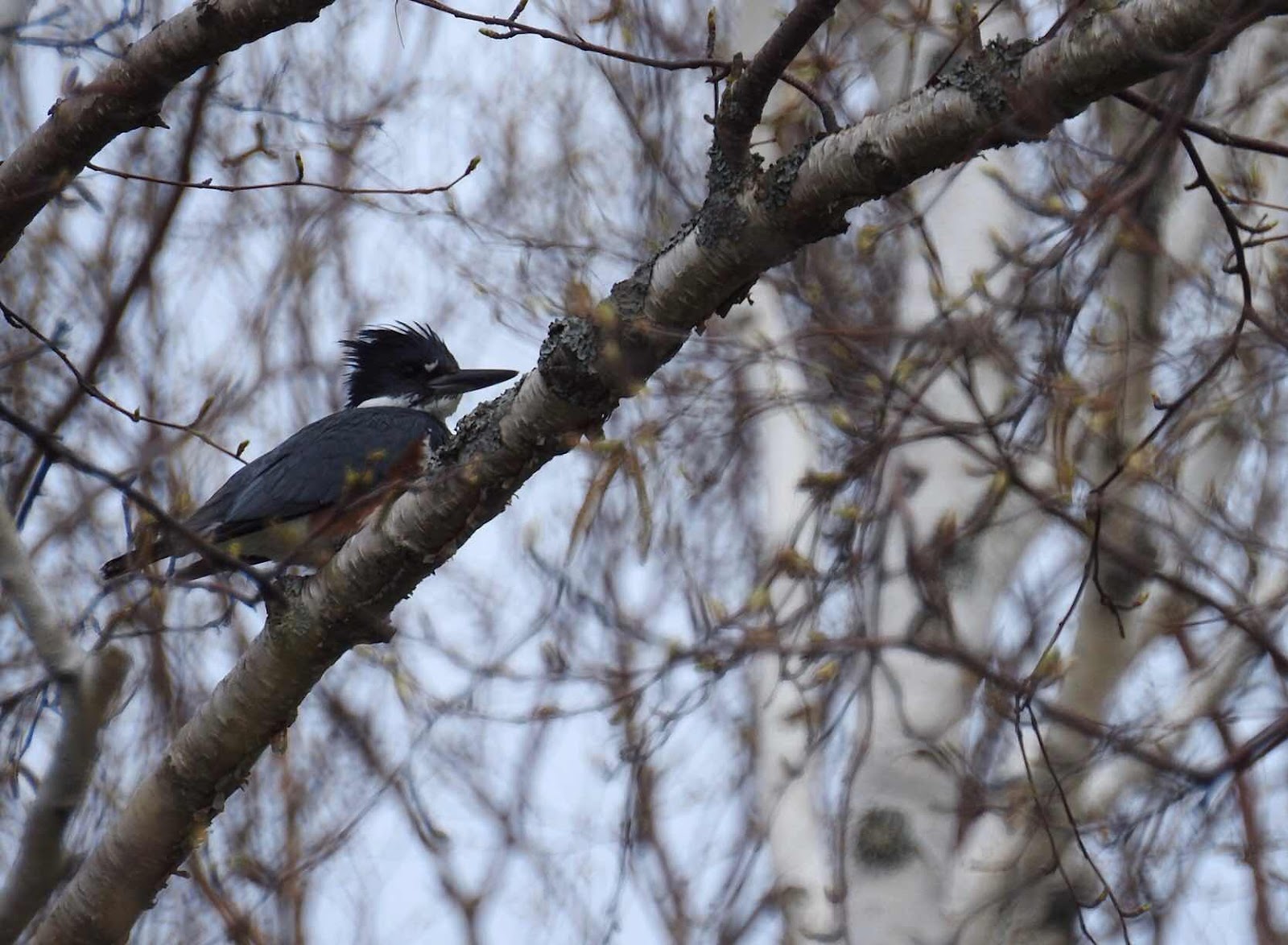 Our destination, the beach at Yankee Hill, the site of the New London Lighthouse, is an area where fishing boats enter a channel to return to French River and other ports along the coast. 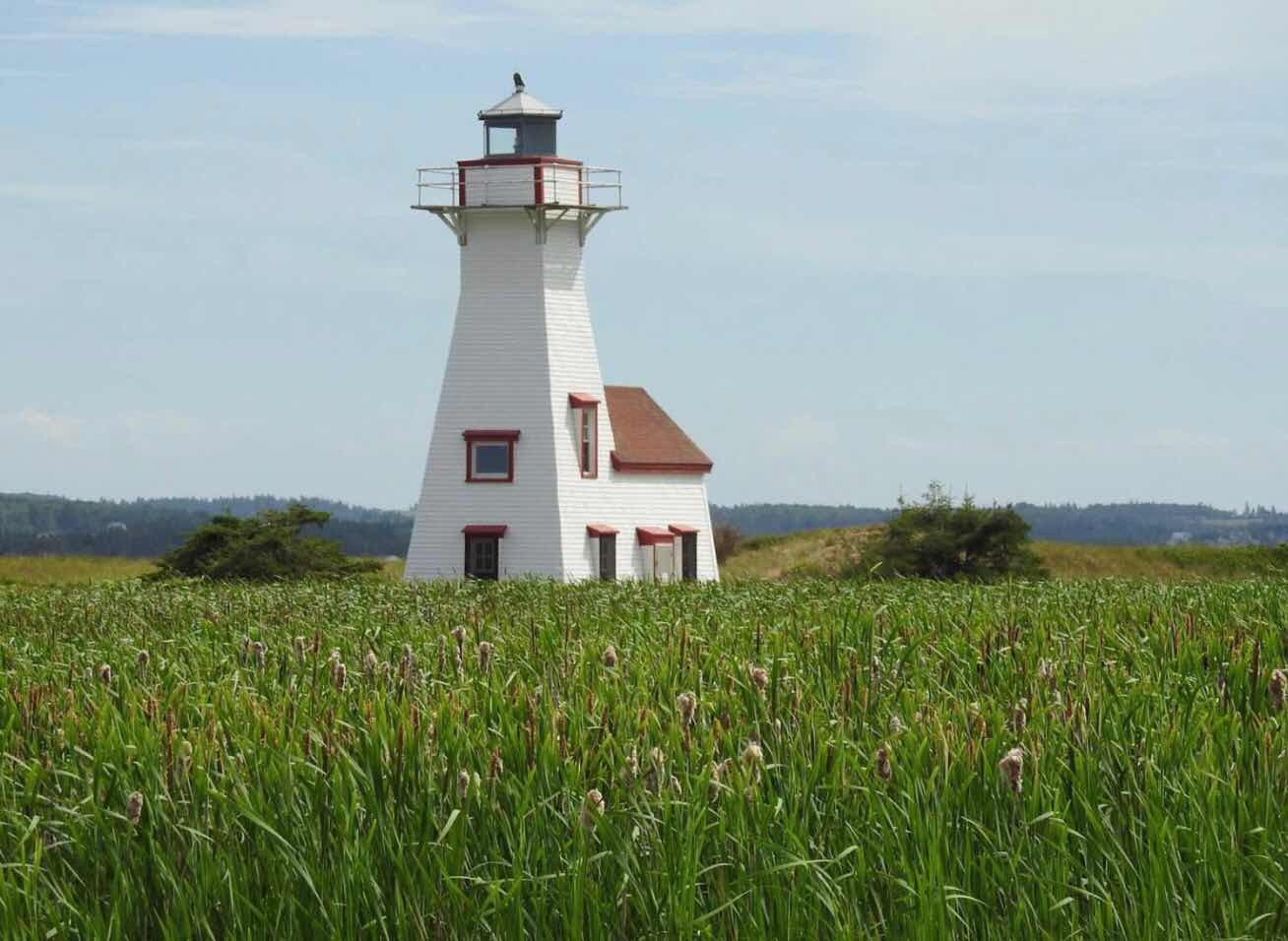 The boats are only a few meters from shore and we love to watch their progress through the channel. We visit here several times every year.

A well used path from the parking lot crosses the dunes which are undisturbed otherwise. I took this photo of driftwood without doing any damage to the Marram grass. 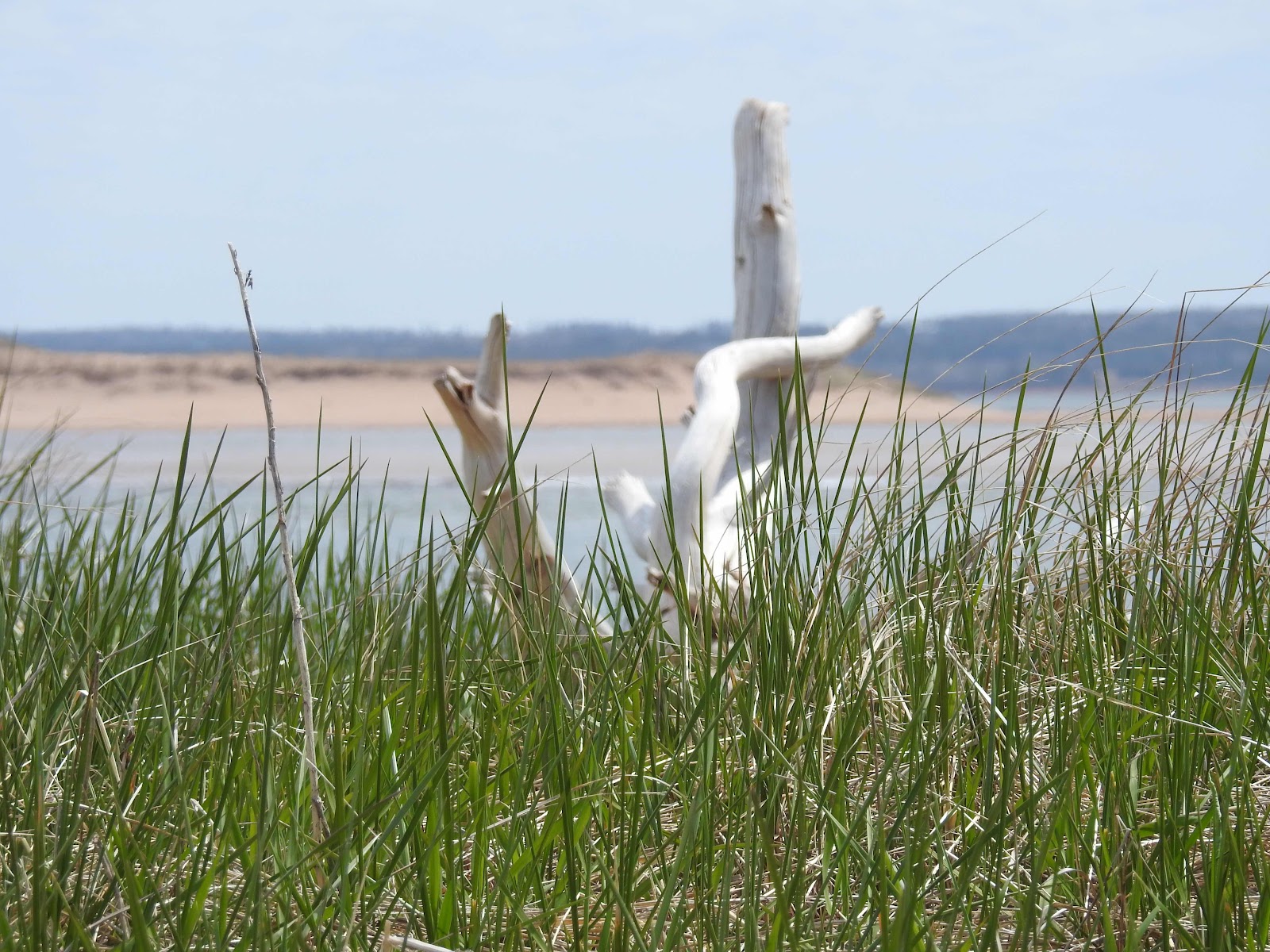 We had our portable table and chairs with us and set them up for a great view of the channel entrance. Before long boats were passing mere metres from us, headed home. 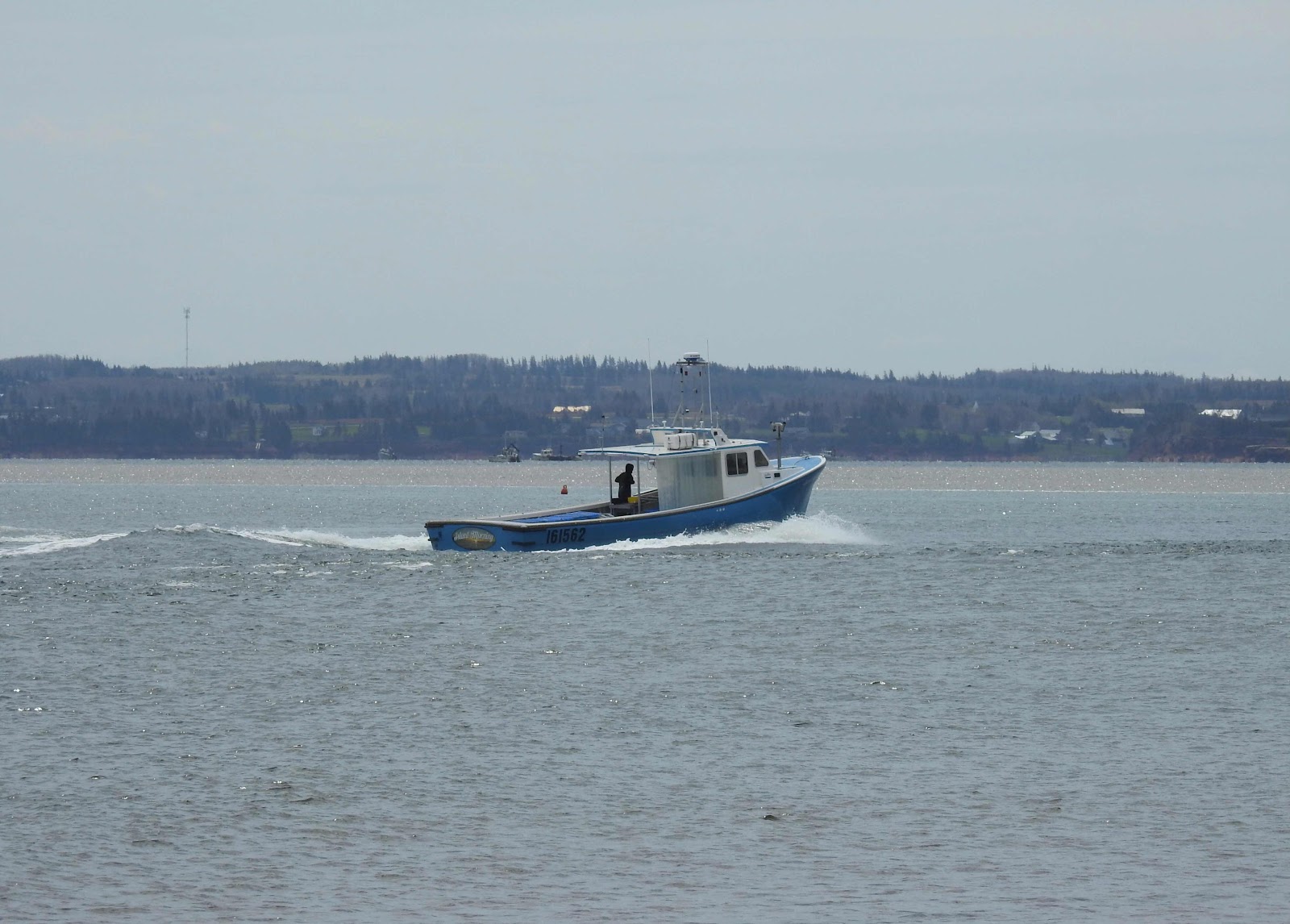 In addition, as we ate, a Bald Eagle flew overhead and disappeared down the beach. Meanwhile, we could see hundreds of cormorants on a sandbar and pylons in the channel. As we ate, we watched the huge flock take flight.

Shortly after, fog emanated from the sand, creating an eerie look of smoke on the water, like the lyrics of the old song. 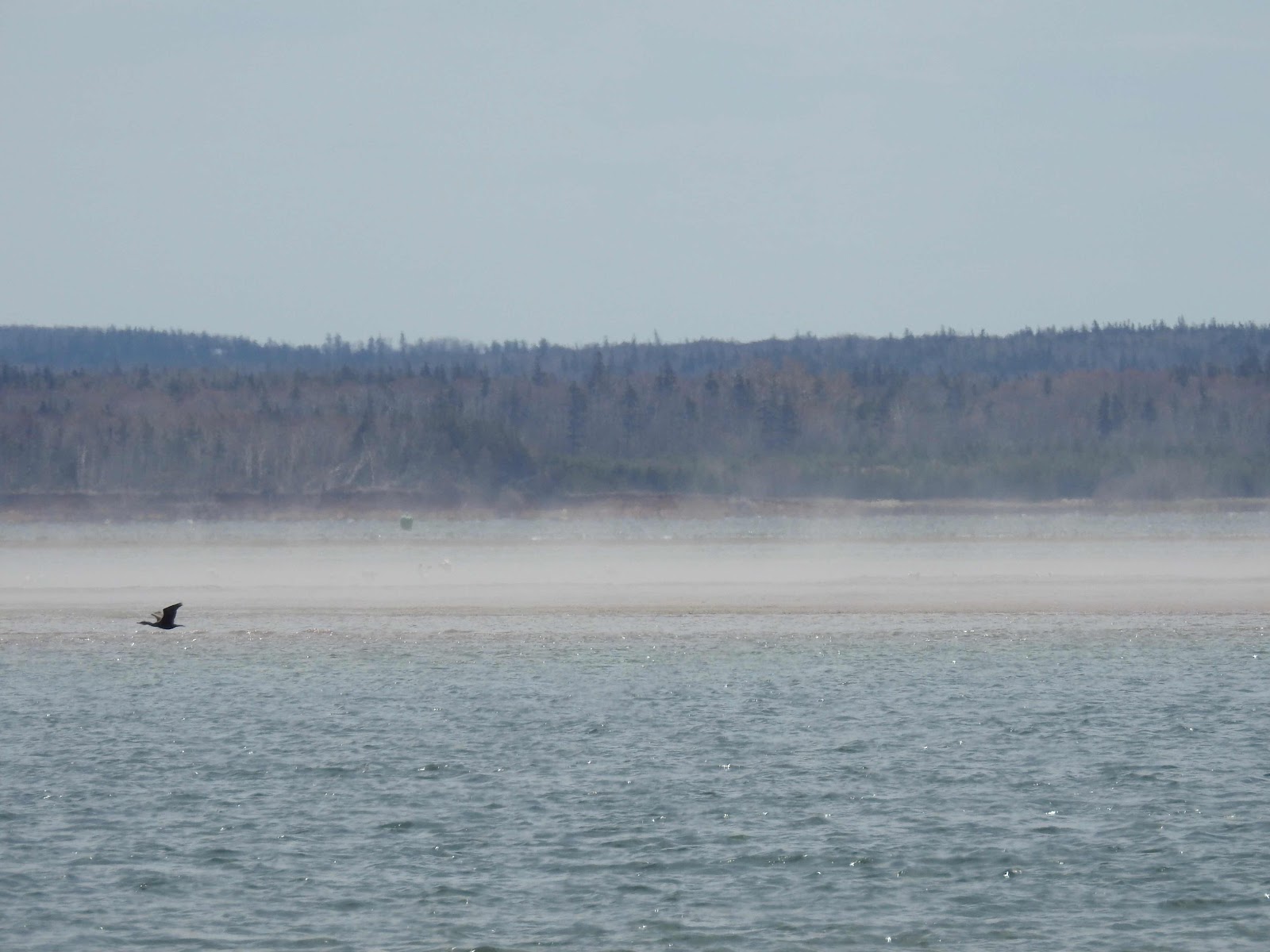 Even the boats released fog in their wake. 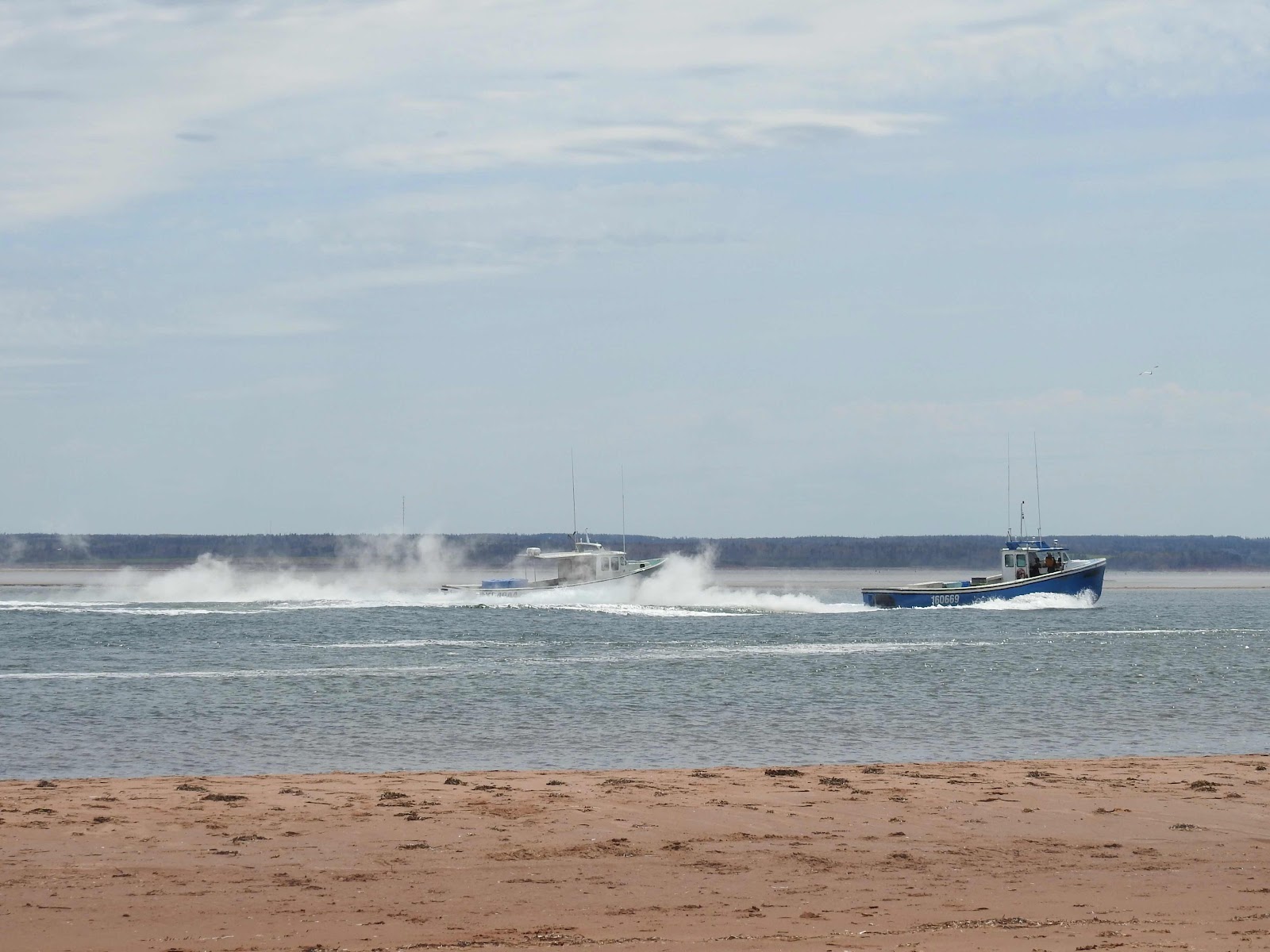 Before we left, I photographed the old pylons in the channel to compare their condition to last year. In the photos I noticed a Bald Eagle sat atop a pylon, surveying his domain. Did its presence scare off the cormorants? 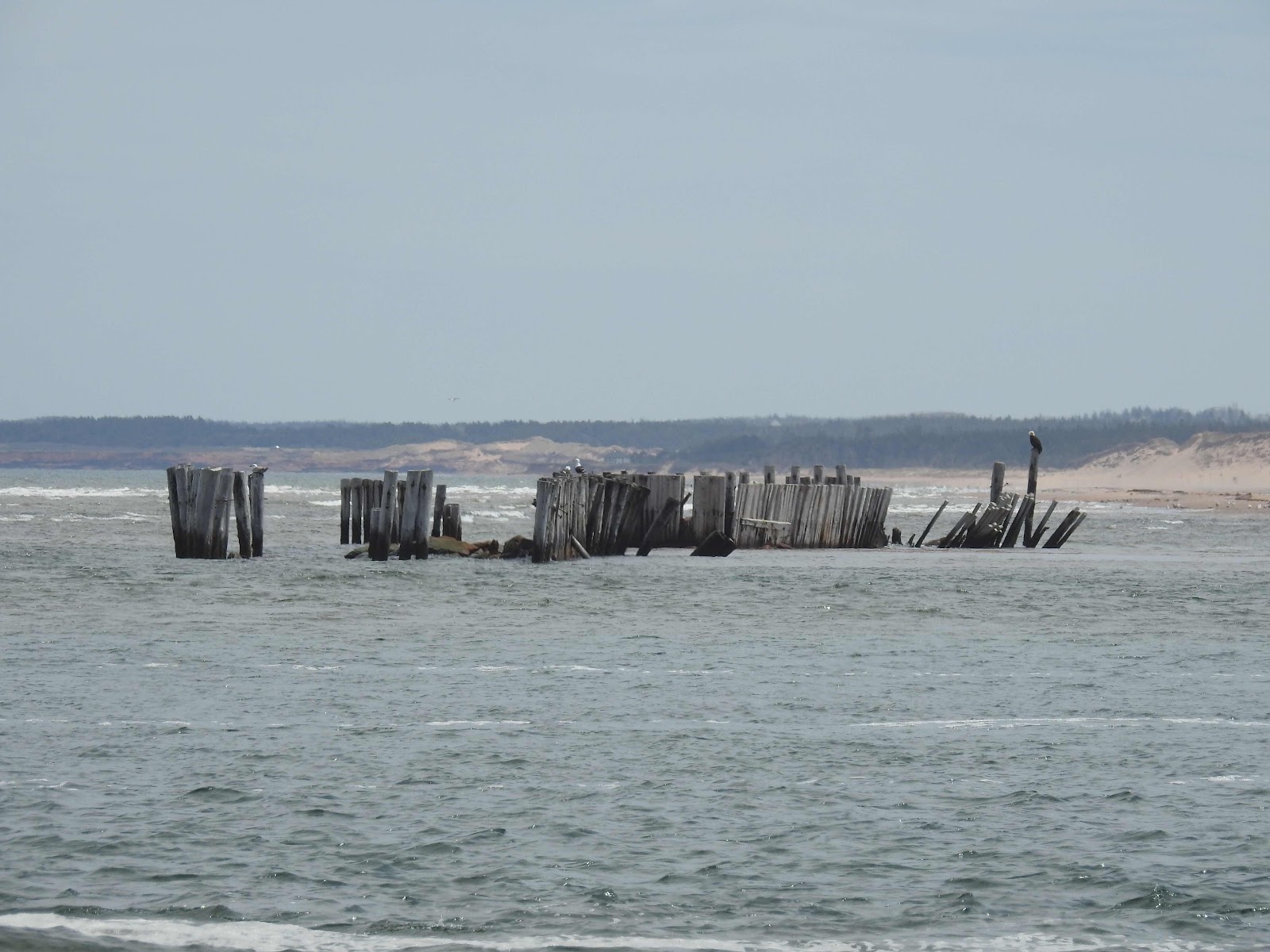 The wonder of island beaches keeps us returning again and again.

What a charming little lighthouse!

Your photos show me a place that looks serene and perfect for a picnic. Thank you for all the different birds, including that eagle surveying his domain. :-)

You have some wonderful beaches on the island - and some pretty lighthouses too. I'm hoping to get to the coast this week.

Those pylons at sunrise or sunset could be very nice. The lighthouse too.

Another fantastic outing and such beautiful photos!

The lighthouse is always a delight to see Marie. You always pick such good spots to have your picnics, what view of passing boats, perfect!

The Lighthouse is pretty. I love the shots of the Belted Kingfisher, the Bald Eagle and the fishing boats. Beautiful views! Take care, have a happy day and a great new week!

I remember this area from old posts. It's quite lovely.

There is a sad eeriness when the fog starts to roll in.

Lovely photos, Marie. The lighthouse is one of my favorites.

What an beautiful light house.

You have captured the beauty so well. The fog creates a magical scene.

A lovely series of pictures, Marie.

That lighthouse is a beauty.

I would love to be able to sit with you on the beach.

Your photos are beautiful and interesting as usual. Thanks for taking us on your journey today.

I would guess you have short growing season.
Coffee is on and stay safe

It all looks so peaceful and idyllic. I love where you live.

love to see fishermen boats... the waves they made are wonderful....

have a great day

Never seen that type of finch....cutie. And that light house is amazing. I have never actually seen a light house in person, one day. Yep one day I will....I HOPE!

Nice photo of the kingfisher. Beautiful scenery, picnics are a good way of connecting with Nature.

So much to see...so much to enjoy...
You and your hubby are really living the Good Life.
Sue

An idyllic setting to set up your table and chairs. How wonderful to spot an eagle.
Such a lovely visit with you to French River.

Lovely place for a picnic. Diane

a really nice set of images today, the driftwood image is gorgeous. i have never seen a belted kingfisher, what a beauty!!

i think all of your idilic picnics have helped you through this pandemic...something fun to do and look forward to!!

and i enjoyed seeing the bald eagle!!

I always love to see the Lighthouse.
Yes, the sight with Lighthouse is the important area for boats to get to know of their returning point.
Have a good day.

I would return again and again as well...

first image is FASCINATING ! i love looking how farmer do their work ,i remember i was as curious as child as now .

must be great fun and peace to see life flourishing around you while enjoying your meal :)
i loved each shot ,it made me as i was there :)
thank you !