It is a short section of trail though a pretty one. It runs for eleven kilometres or so from Kinkora to Borden Carlton. Back in the days when the railway ran this route, Borden had a ferry across to New Brunswick in the location where the Confederation Bridge is today. This section of track would have been busy transporting people and goods to and from the ferry.

This route has an area lined with coniferous trees. There are some different birds in such an area from the usual ones I see on the Trail, like this Yellow-rumped Warbler. 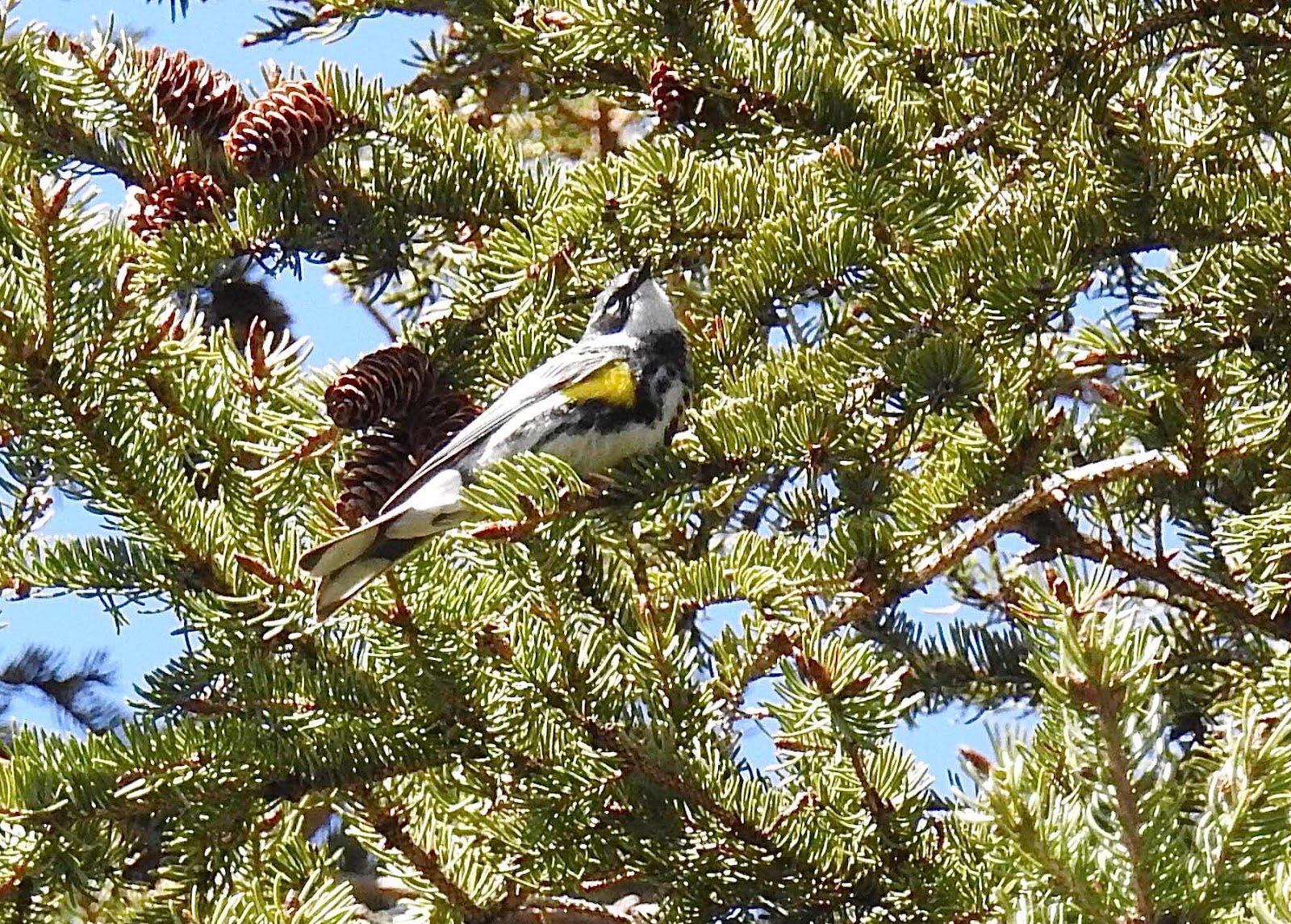 I was thrilled to see it and stopped to watch for a few minutes. My husband and I enjoyed riding into and out of the shadows on this section of trail. 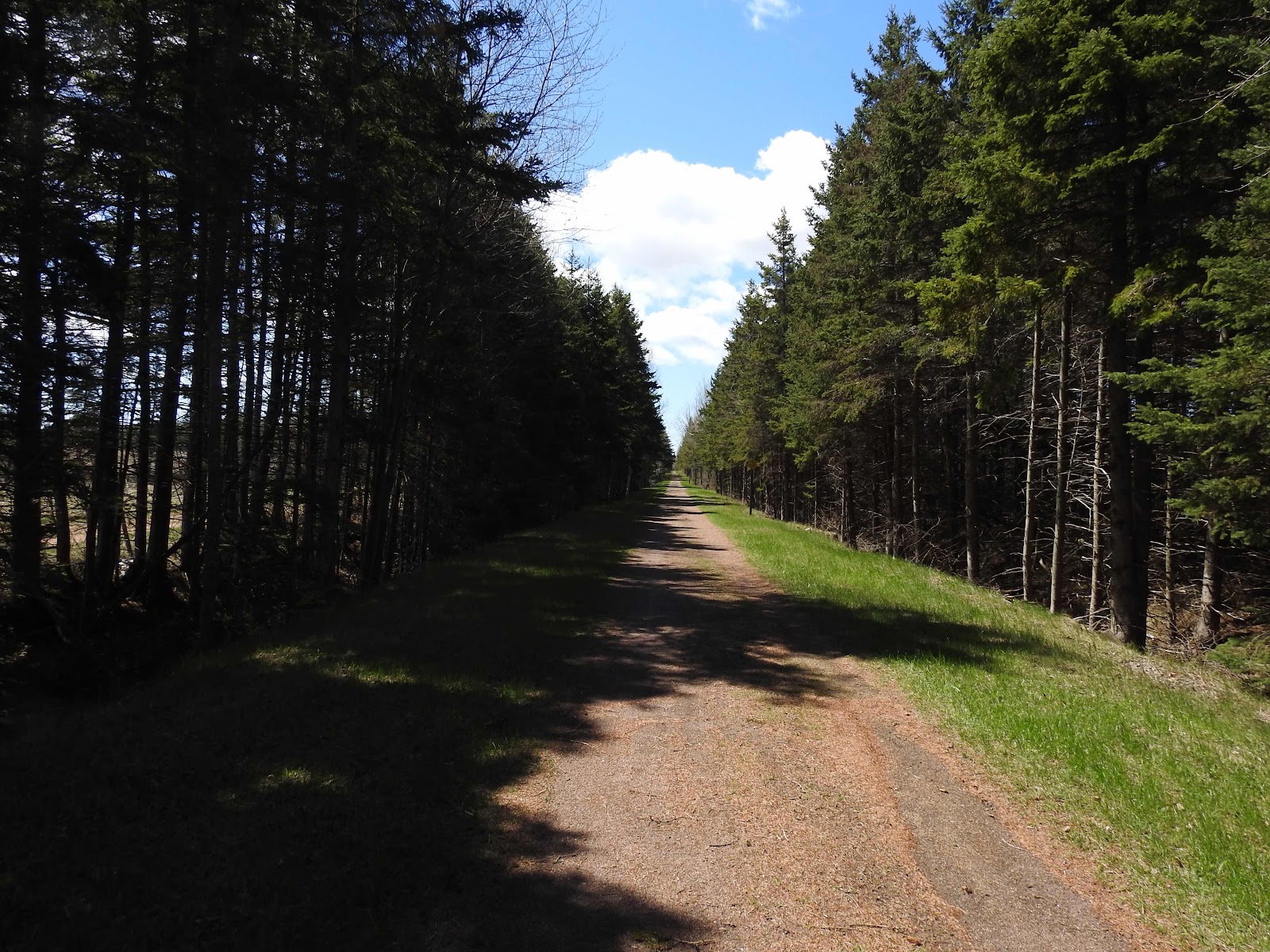 Further along, this male Mallard was on his own swimming around in what wasn’t much more than a mud puddle. 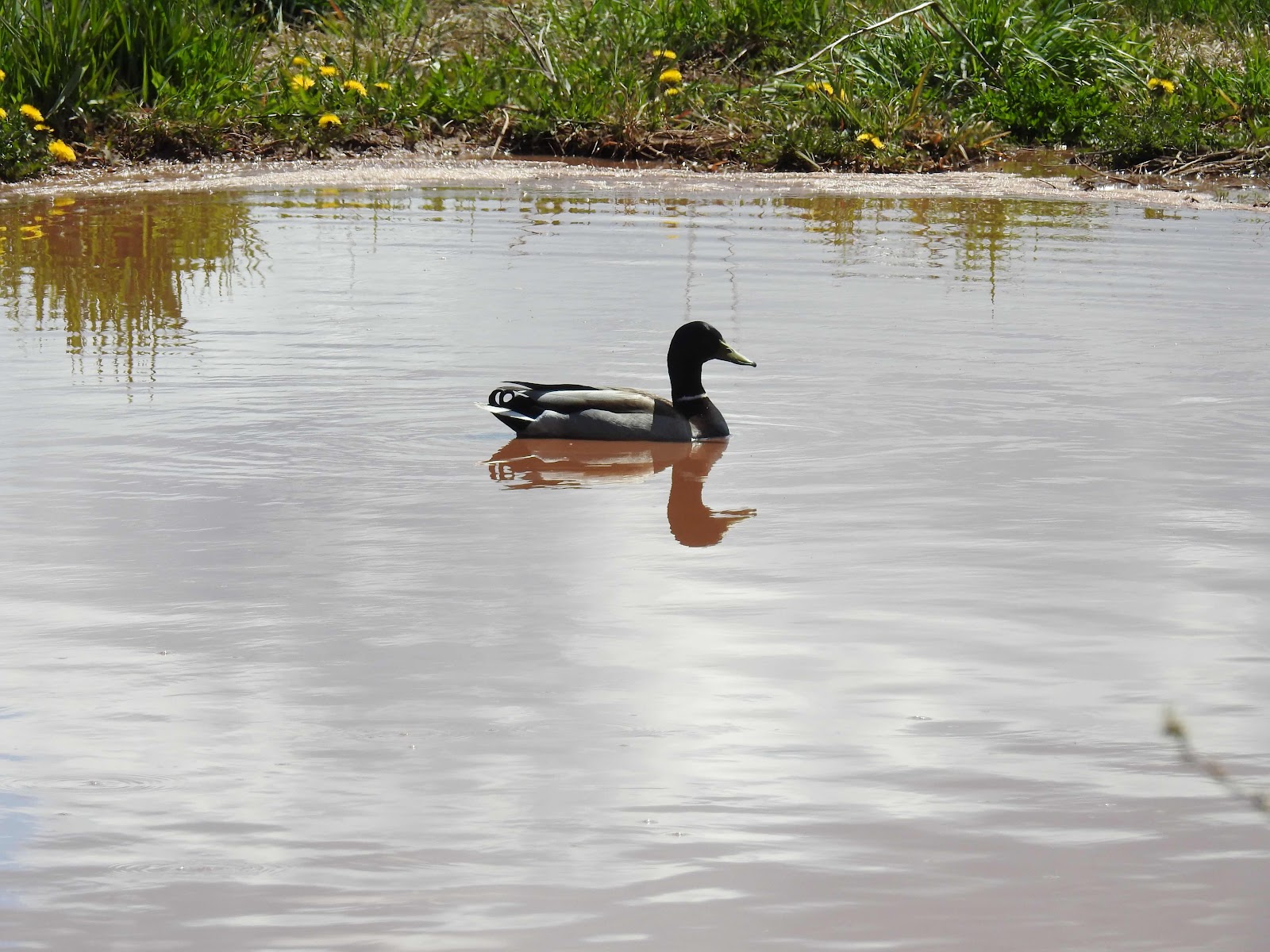 Two small horses were interested in the senior stopped to take their photo. Smile! And I did. 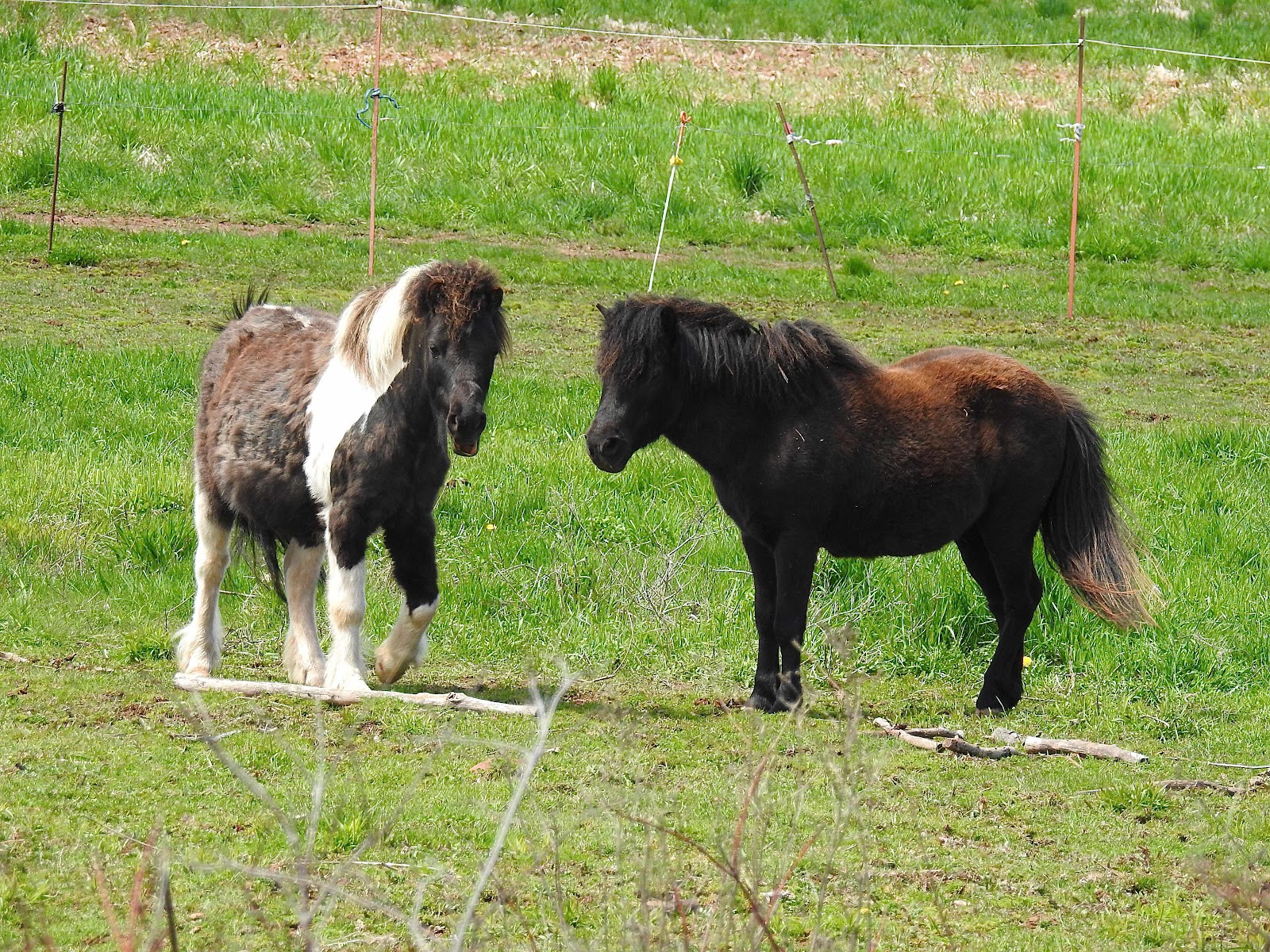 The trail is beginning to bloom with dandelions now, some sections further along in the bloom than others. We rode to the end of the Confederation Trail, an area where the highway was busy with transport trucks coming from and going to the bridge. We turned back rather than cross the busy highway to a local trail.

Along the way, we watched for an ideal picnic place. There were several picnic areas but one was nestled among a stand of birches. It was a perfect spot away from the wind and the trees enveloped us. We sat on the end of the bench in the sun and had lunch. 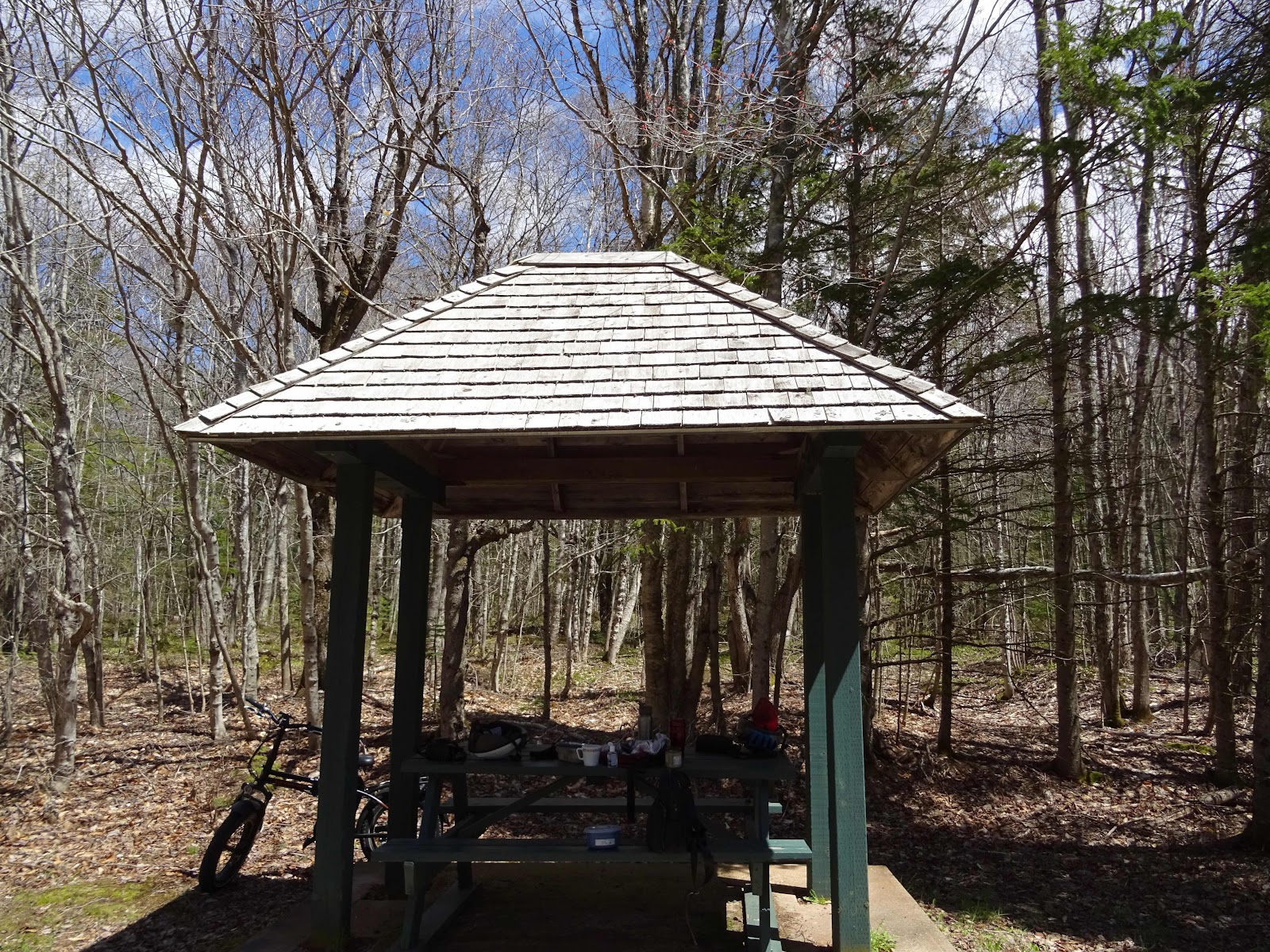 Recently, for lunch we’ve taken a fancy to quinoa with roasted vegetables, dried fruit, nuts and seeds and olives for my husband. We make a dressing with mayo, Dijon and a flavoured balsamic vinegar. A few cold packs keep everything safe. Apples and tea round out the menu.

While we ate, it sounded like a lumberjack was working nearby. A woodpecker was busy in the trees and the sound carried through the budding trees. Of course I had to look for it after lunch. It took several minutes but eventually I discovered the Yellow-bellied Sapsucker busy around a hole it had carved out of a tree. 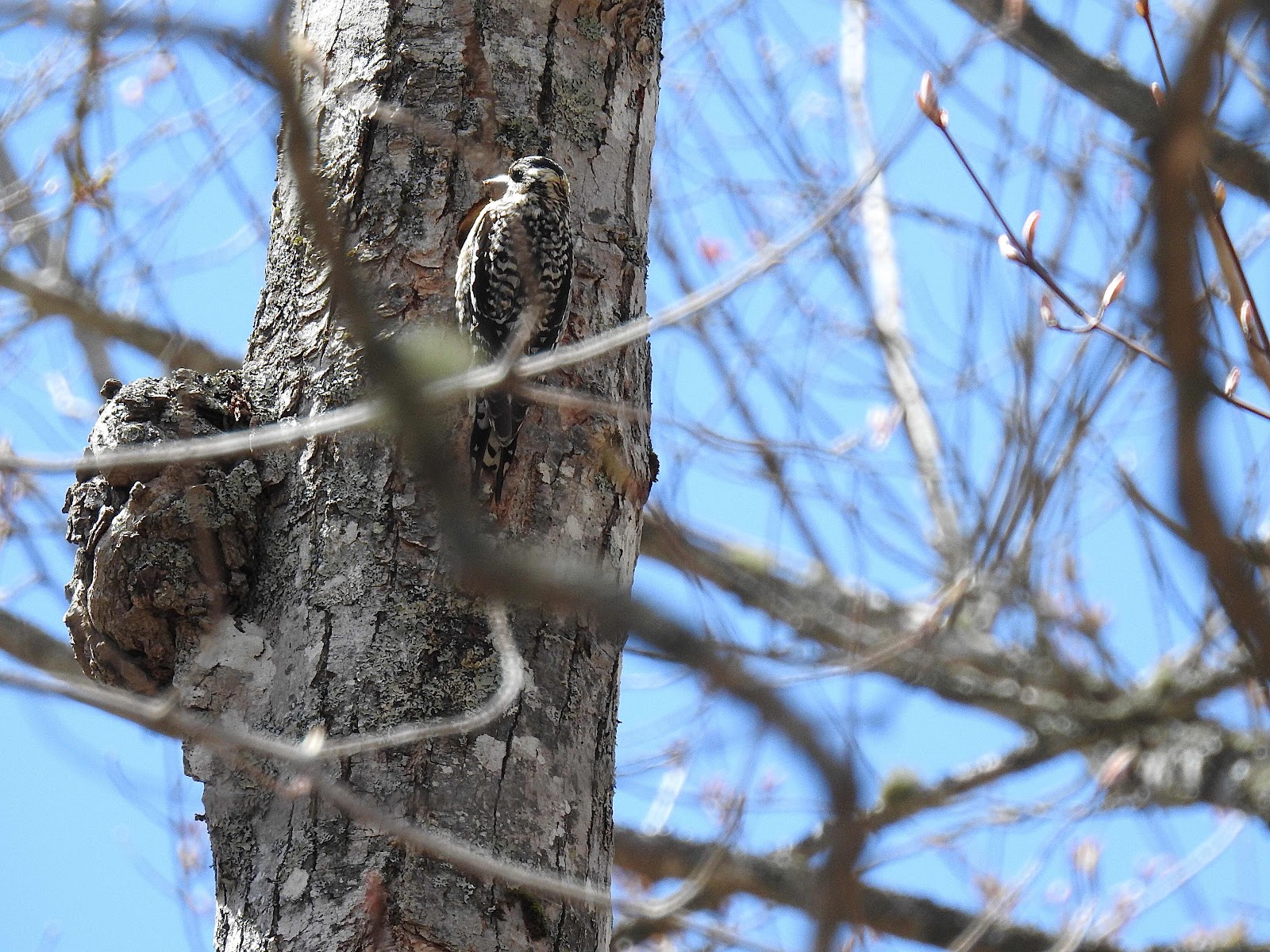 Periodically the bird dipped into the hole to retrieve sap or insects stuck there. 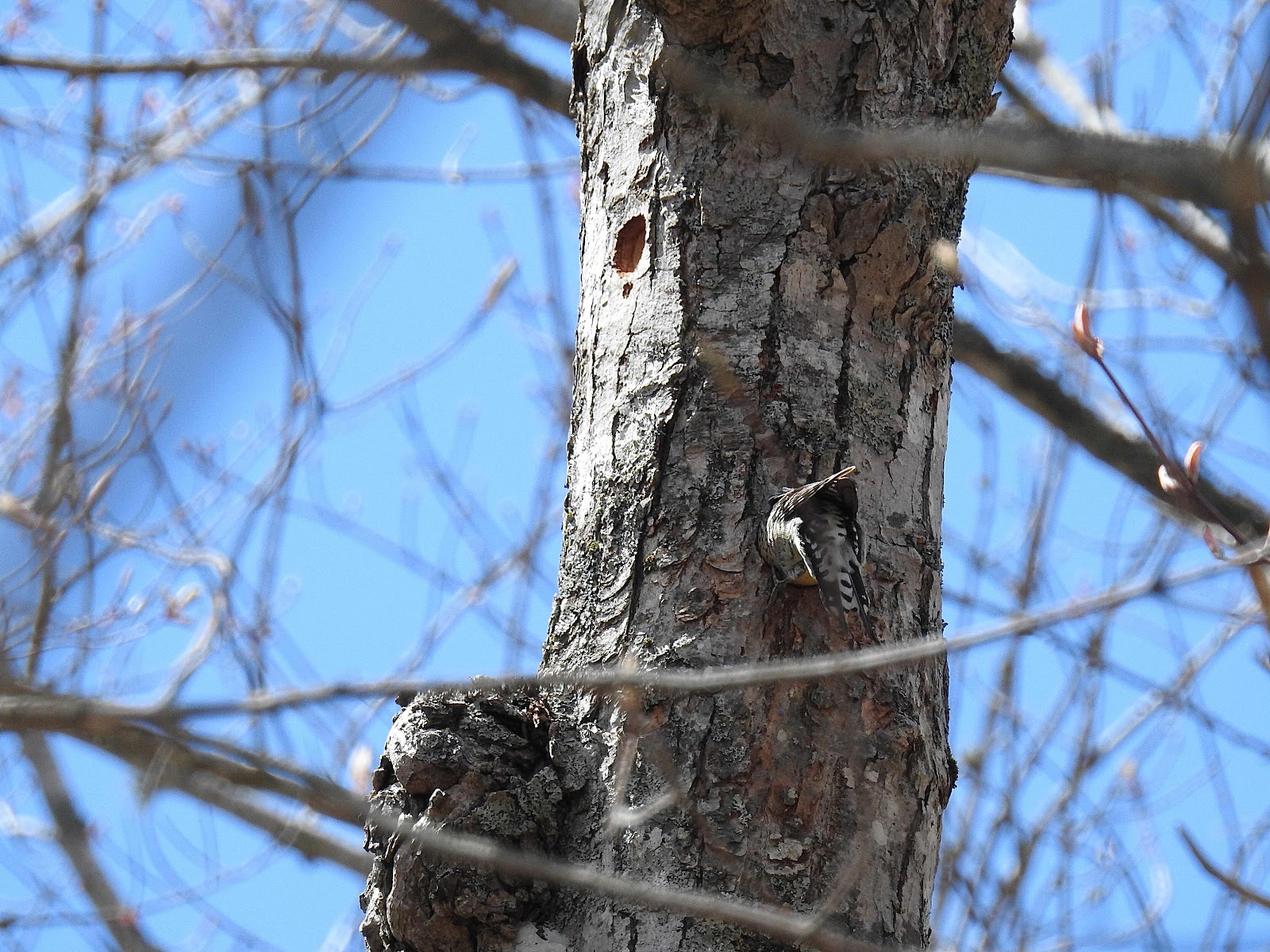 I couldn’t see the front of the bird. Could this have been a juvenile, without the red markings? You can see it has another hole ready. The holes must be deep according to how far the bird disappears into one.

On the way back, we could see St. Malachy’s Roman Catholic Church across the fields in the distance, its spire towering over the countryside. It is a testament to the importance of faith to the people of the land and sea. 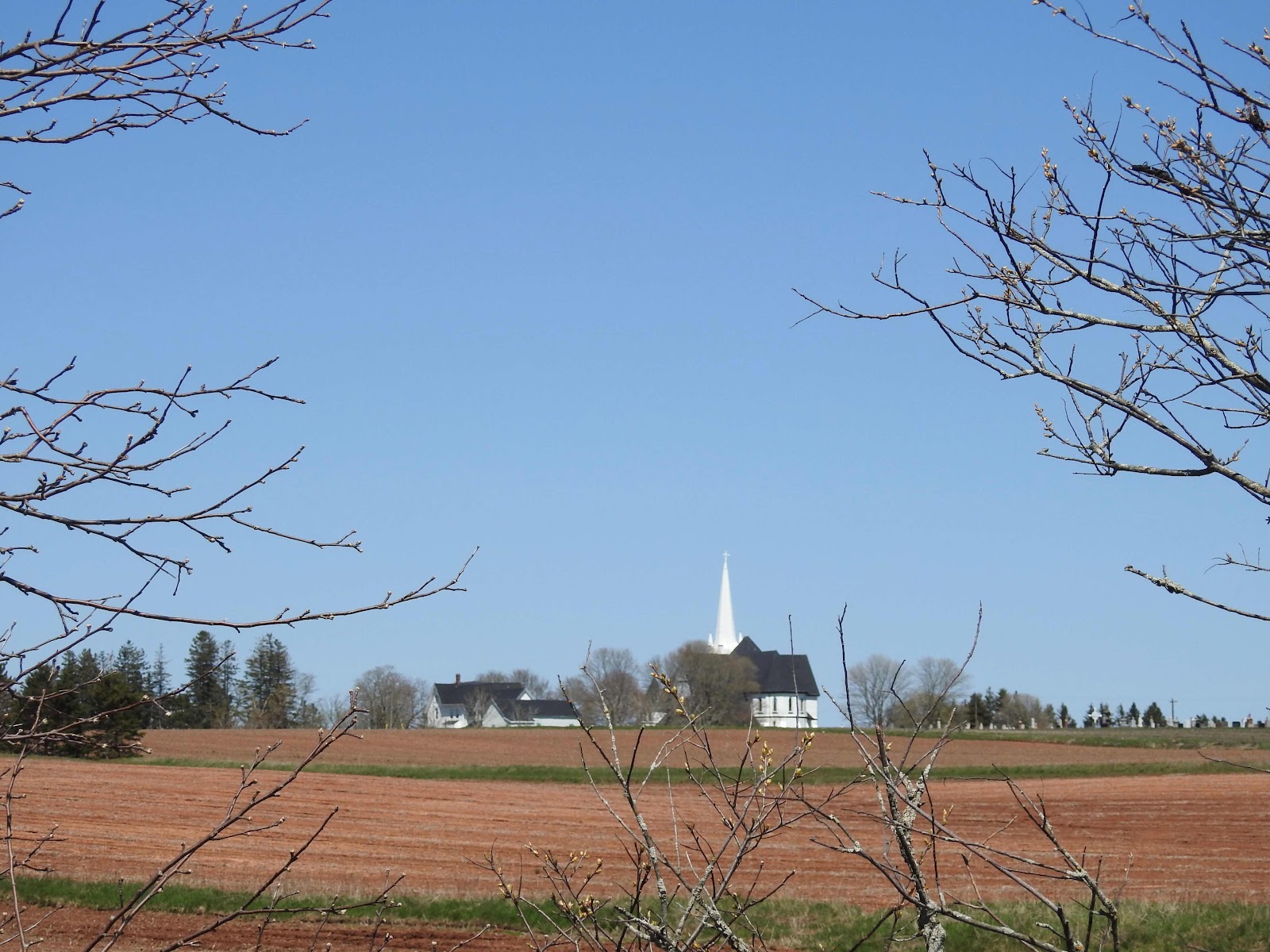 The birches in this area will bring us back to this section of trail time and again.

Some people commented about fieldstone. The rock on Prince Edward Island is chiefly sandstone which isn’t hard and breaks easily. Revetments and breakwaters are made of rock imported from the other Maritime provinces. The fieldstone in the train station at Alberton may have been imported as well, unless the fields had such stone a century ago.

An old barn we watched deteriorate over the last few years was demolished last autumn. The owners dug the area for a garden and raked the rocks, five or six small rocks scraped from the rich red soil. It is the same everywhere we’ve been.

Someone was curious about the toilet facilities along the Confederation Trail. We have seen two such facilities. Also, the trail goes through communities where services exist. However, with so few people using the trail, it is never a problem to do what one has to do.

Finally, Piping Plovers are nesting on the island this time of year. The At Risk Species nests in the sand along beaches in areas of the national park. People can’t bring dogs on the beaches where areas are condoned off for the plovers. We have see signs about the plovers at Savage Harbour along the northeast coast of the island as well. We have never seen these rare birds.

The birch trees and trail are beautiful. I love the cute Warbler and great sighting of the Sapsucker! The beaches here roped out sections of the beach for the nesting plovers and other shorebirds. I am glad they keep the dogs off the beach too. Take care, have a happy new week!

I don't think I realized before reading your posts of how far behind us your trees might be in spring. For the most part we are pretty well leafed out.

They are all such beautiful photos Marie. I love seeing the dandelions blooming on the trail. I'm excited to see how it will look a few weeks from now. Have a fantastic week! :)

Thank you for the reply.

Thanks for all the pictures and information about the area. I smiled at the bird's rump while finding breakfast. And that sure is a nice place to have lunch. A really enjoyable post.

Great set of photos and I love the ponies. You have a lovely place to ride, it all looks so quiet and calm. An interesting note about the Piping Plovers, maybe you will get to see some soon. Re quinoa, I have only tried it once and was not impressed, maybe I should try it again, need to find a good recipe! Have a good week Diane

Your trail looks beautiful (and life sustaining) to me. Your lunch fits both of those categories too. Thank you.

A great place to enjoy nature, ride the trail and take some beautiful photos of the animals and birds you see along the way. And to top it off, have a picnic. Life is grand!

What a wonderful trip you took us on. Thannk you.

Excellent coverage of the sapsucker creating its home. The next challenge is obviously to find Piping Plovers, a little bird that will enchant you so greatly you will wonder how you could be so thrilled.

You are vert wise to take advantage of these well set out trails.

Lovely alley of birches, and I'm glad to hear you have Piping Plovers nesting.

I wondered if you had the bikes out yet.

Seeing the green grass and the dandelions makes that trail come alive.

really gorgeous captures today...and the extra information was awesome for us inquiring minds, i was curious about lunch. weird, i know!!

the warbler is stunning, the woodpecker too!!!

I like both birch and aspen trees. And woodpeacker looks like it stuck.
Coffee is on and stay safe

Your trip looks wonderful. The dandelions on the trail is pretty.
Thank you for the notes. I will tell to my friend about the information.
My friend Emi is very curious about Prince Edward island, and read many books.
However computer is not her thing.

The trail is so beautiful, and I love your pictures! The ponies are so cute!
xoxo
Lovely
www.mynameislovely.com

I sure enjoyed your photos, as well as the descriptions. I so totally loved the shot with the dandelions and the one with the church.

Your yellow rumped warbler is beautiful Marie. Everytime you show a woodpecker it gets me wondering if we have them, this time I'm going to check 😉 You picked the most beautiful spot for your picnic, which sounded delicious, the air would have been so fresh surrounded by wonderful tall birch trees 💜

You live in such a beautiful "world". I love how you pick out picnic spots and just soak in the scenery.
Your bird photos are great. I love the one of the sapsucker diving into the hole for some goodies.
Sue

must be exciting to ride along the trail...
a lot of things to see: bird, wild flowers and even cute little horses.

love to read your post.... have a great day

Riding between those birch trees would be so lovely. Love the birds - the sapsucker reminds me of Northern Flickers that we see around here. When they drill into wood the sound echoes throughout the forest. Your lumberjack analogy is perfect!

So much to see, to enjoy and to photograph.

You certainly live in a beautiful part of our world. I love following along with you on your outings.

trail is my favorite :) so beautiful and fascinating !

how lovely to have company of naughty bird digging trunk for nests ,reminded me such voice i heard sometimes in past :)such sights are priceless indeed.