On a rare sunny day among many unfit for cycling, my husband and I headed west to complete this portion of our tip to tip island cycling adventure for this year. The Confederation Trail runs across the island and this western portion being closest to home is the easiest for us to complete.

We drove to Alberton and parked at the library which is in the old train station.

The building is a surprise to my husband and I since we rarely see anything other than sandstone on the island. This fieldstone building is restored beautifully to its 1904 condition. One can almost hear the old steam engine chug into the station. 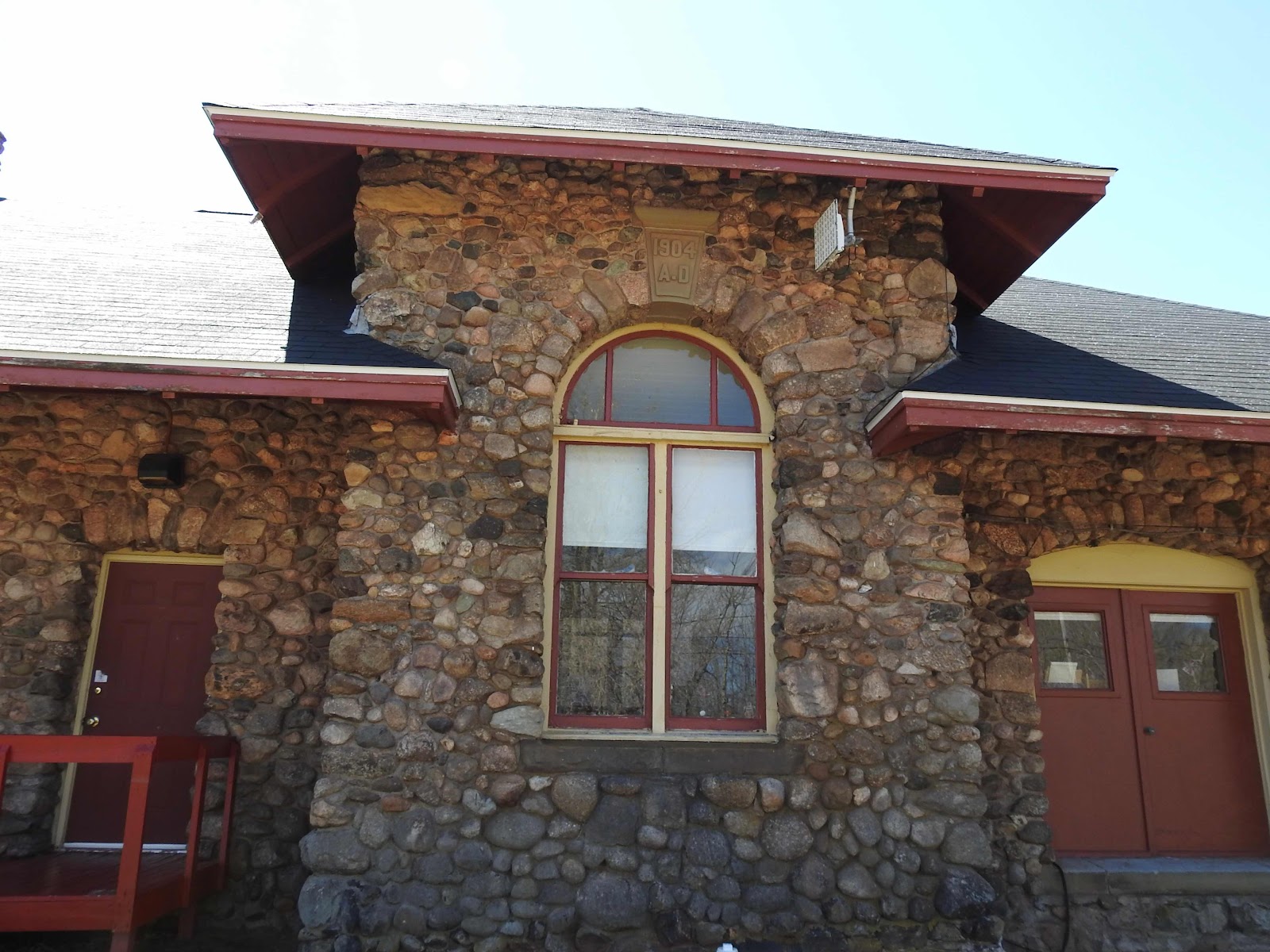 The trail is on the verge of erupting into green. It will add another layer of beauty soon. 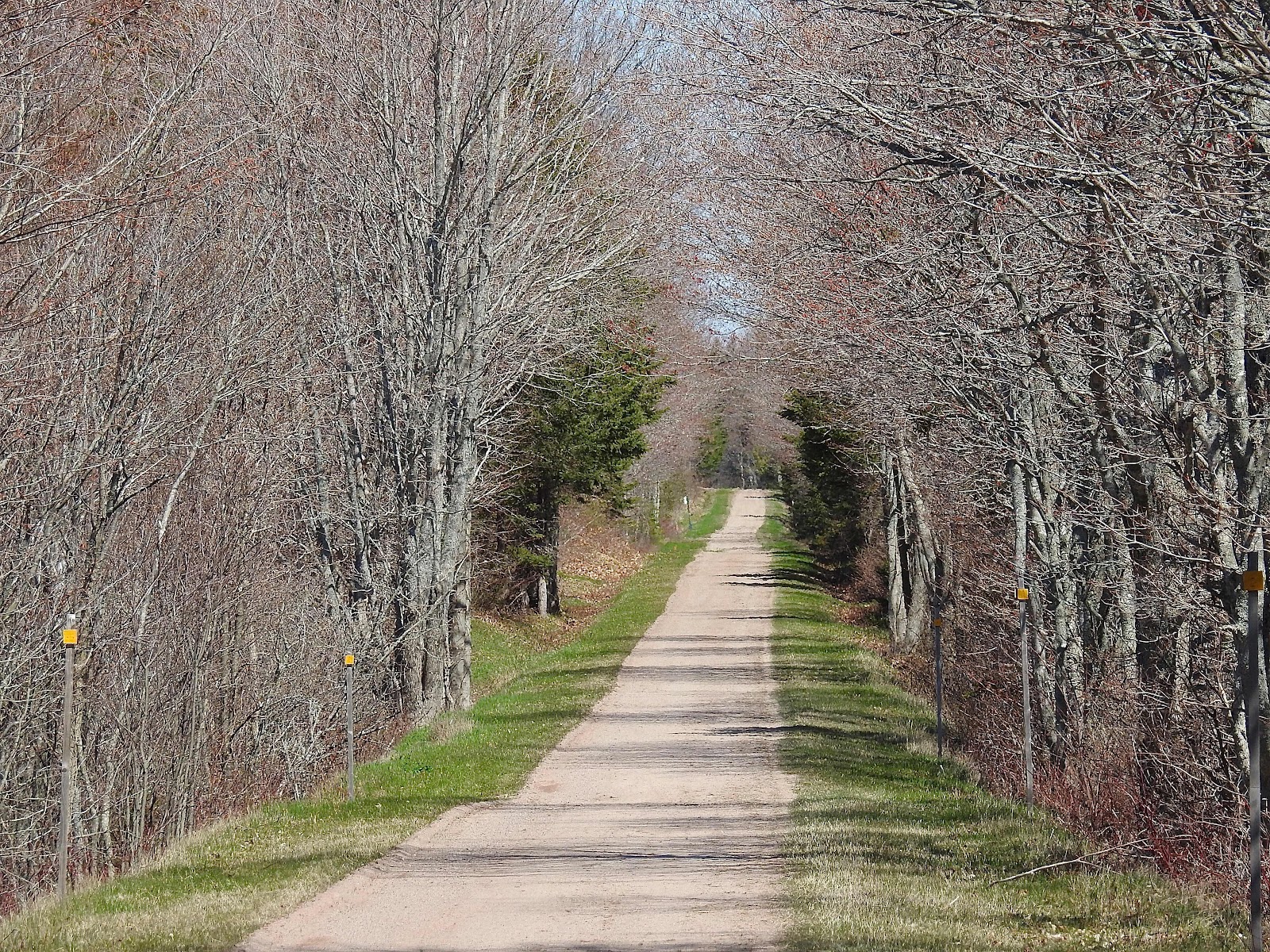 Maintenance work made this section of trail a pleasure to ride, as smooth as new pavement. We passed a drum roller, a groomer and crew busy at work. 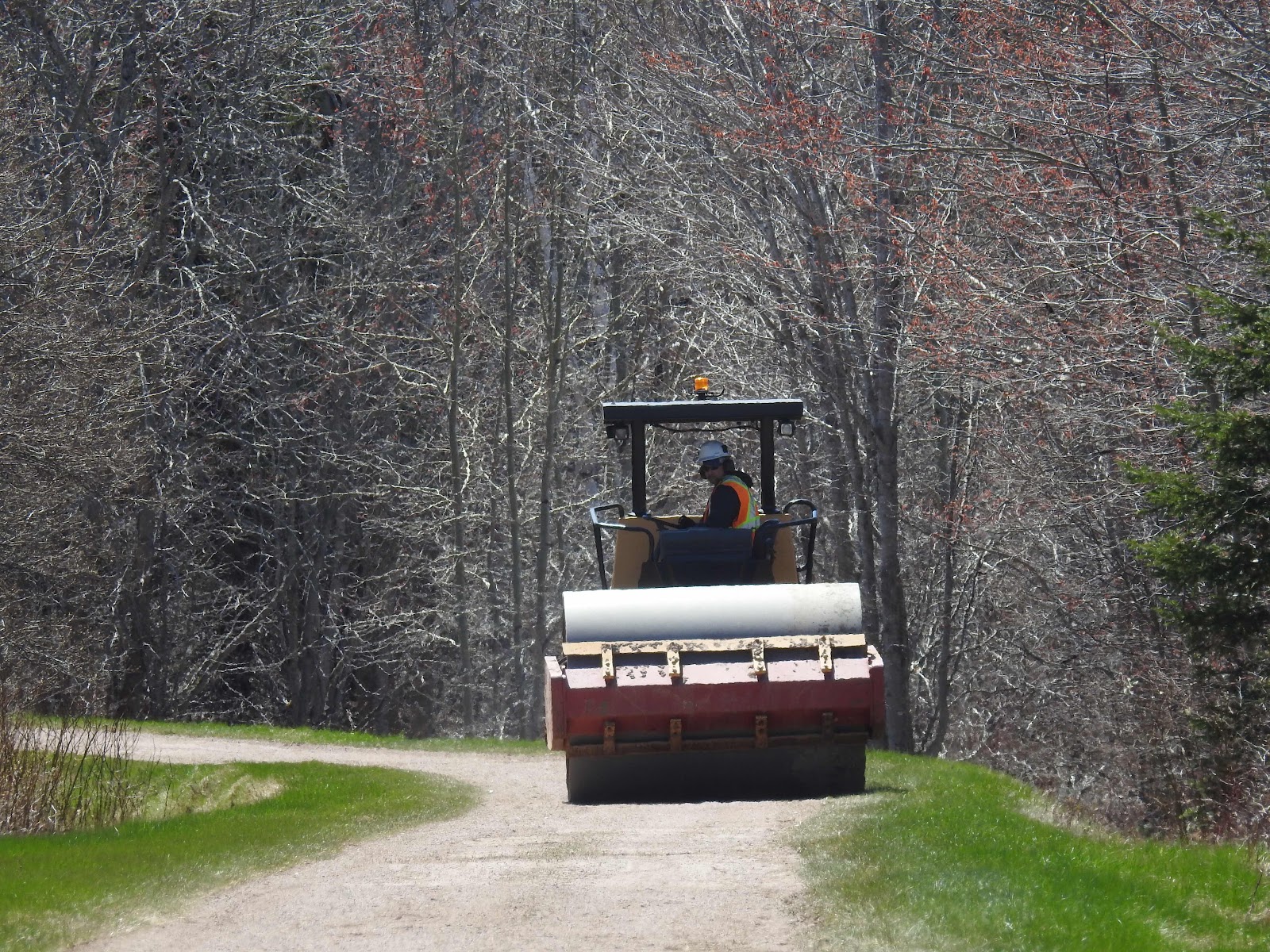 An old concrete culvert, dated 1923, now sits beside the trail, having done its time under the old tracks. 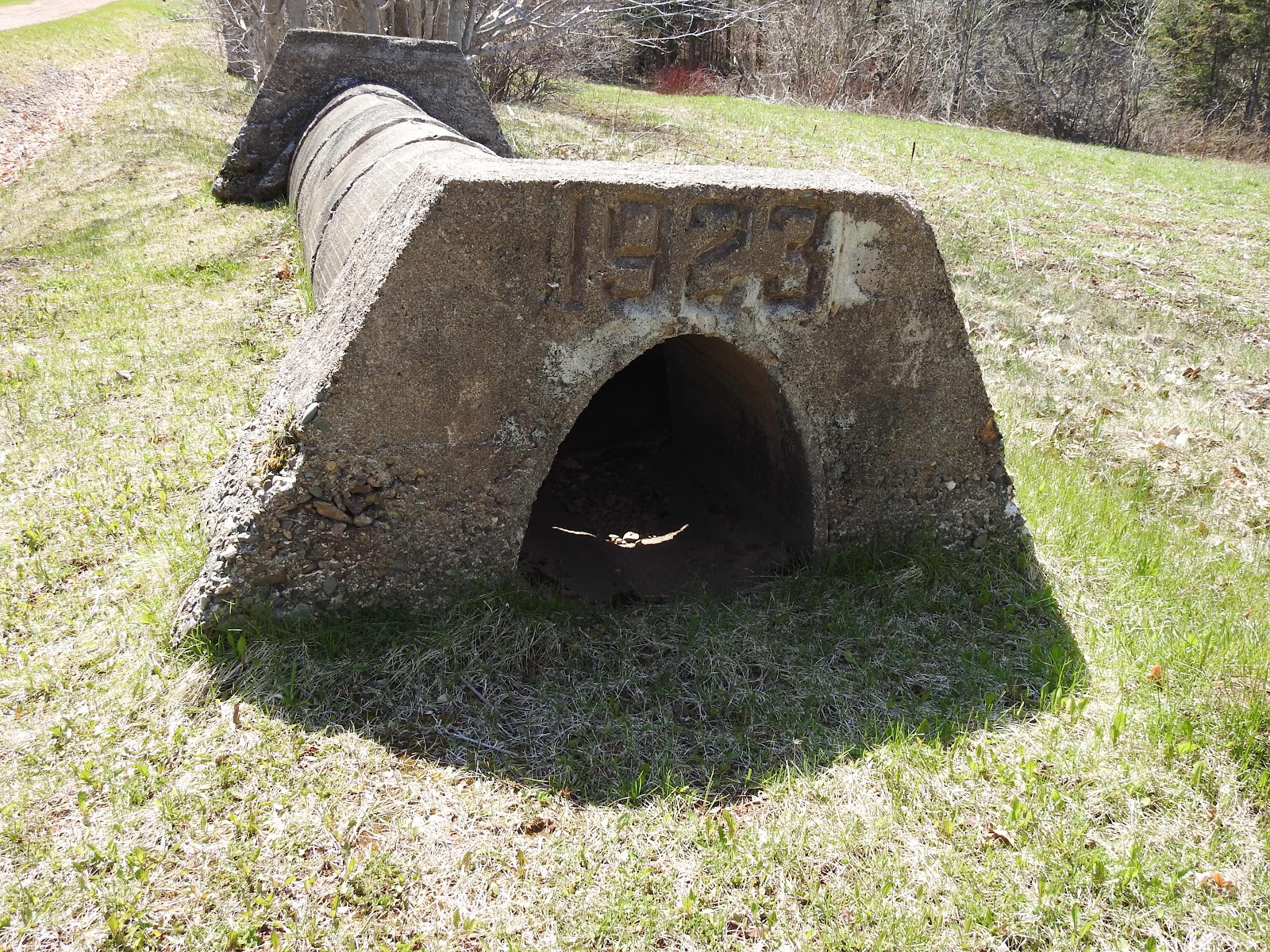 Marsh Marigold is in bloom now. The yellow blooms remind me of buttercups. 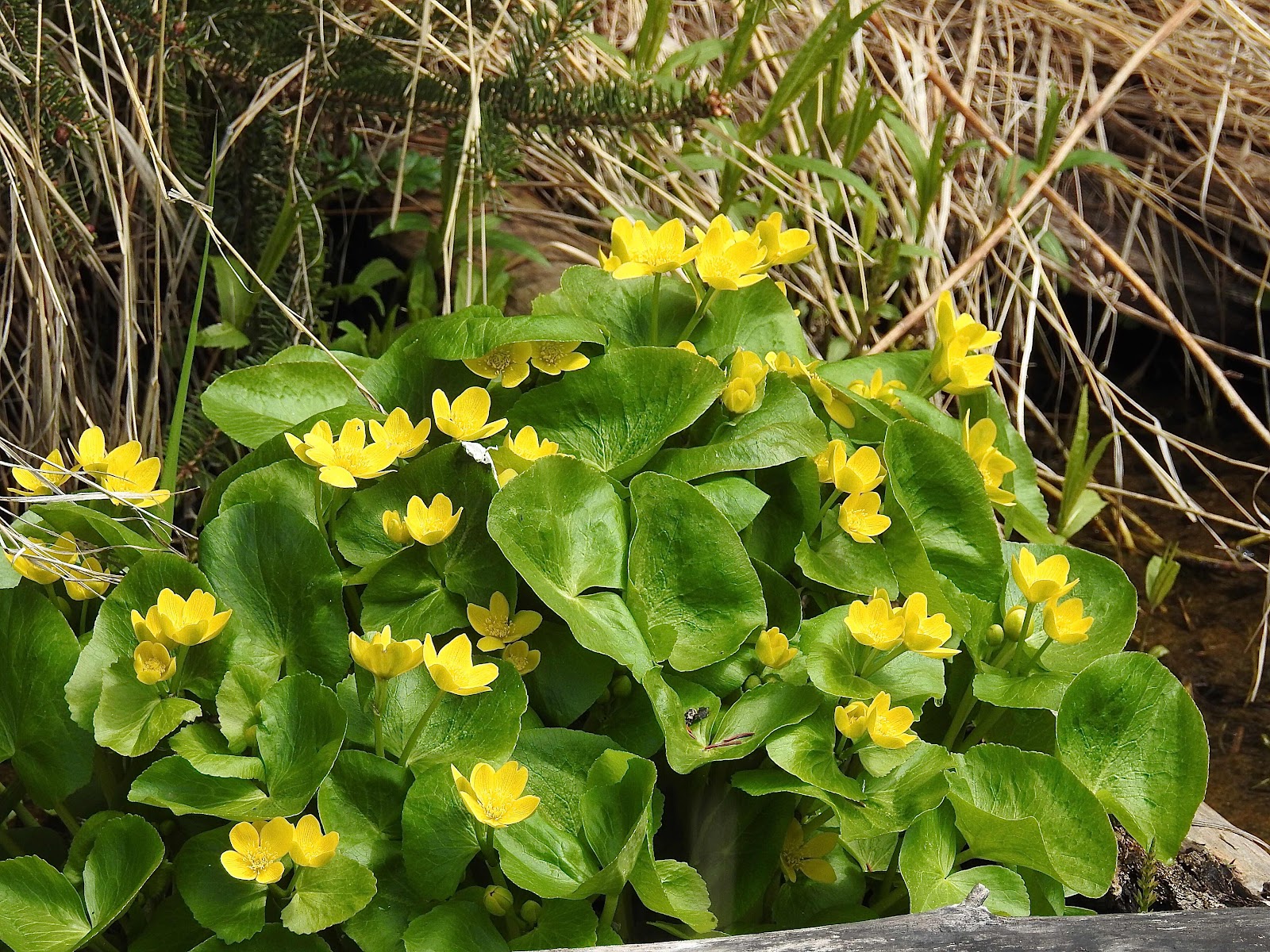 At Tignish, a place with a name I love, we reached the western start of the trail. 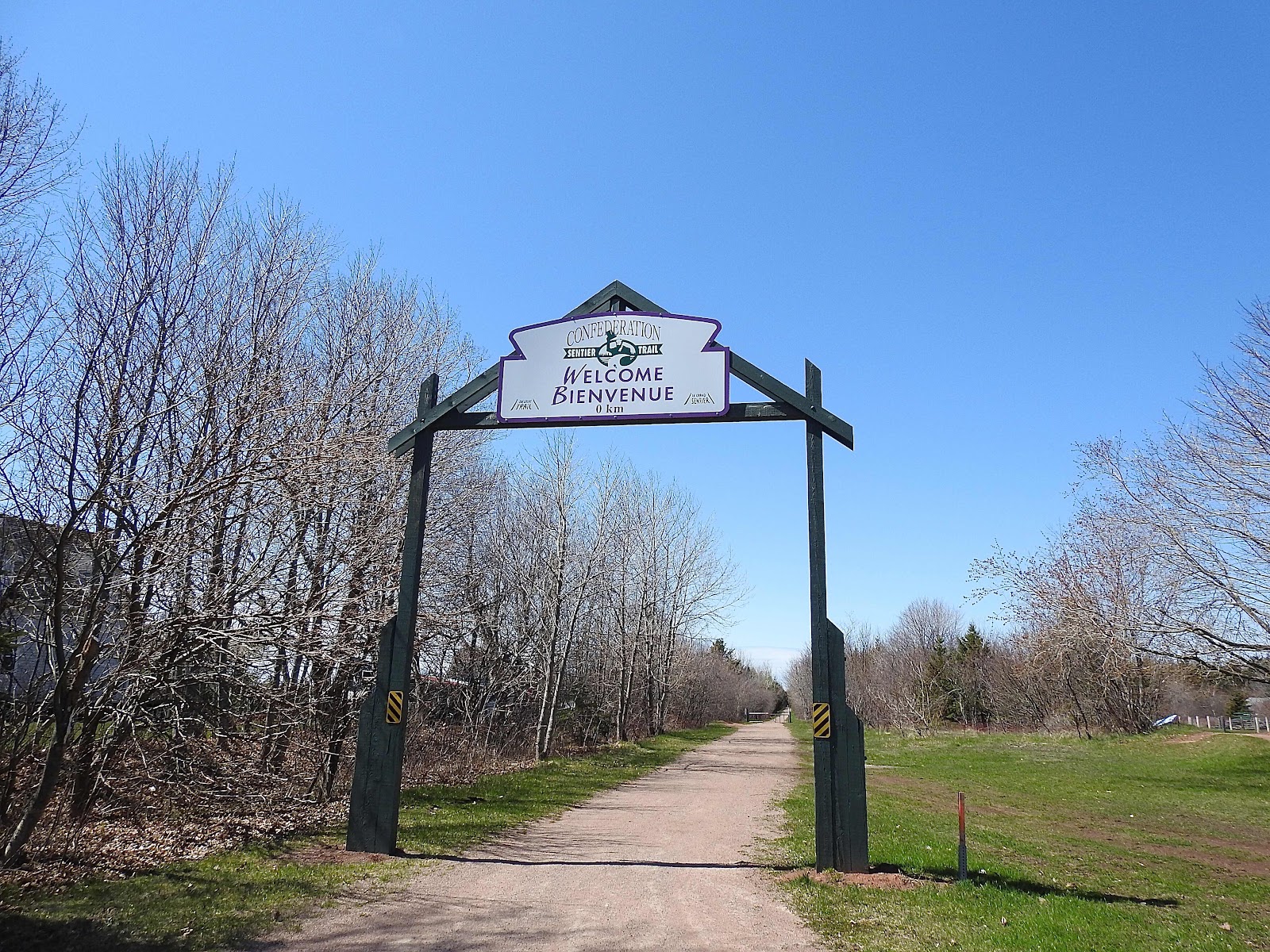 On our return, we had lunch at the site of the memorial to the worst train wreck in island history. Two trains collided and four people died during a winter storm in 1932. 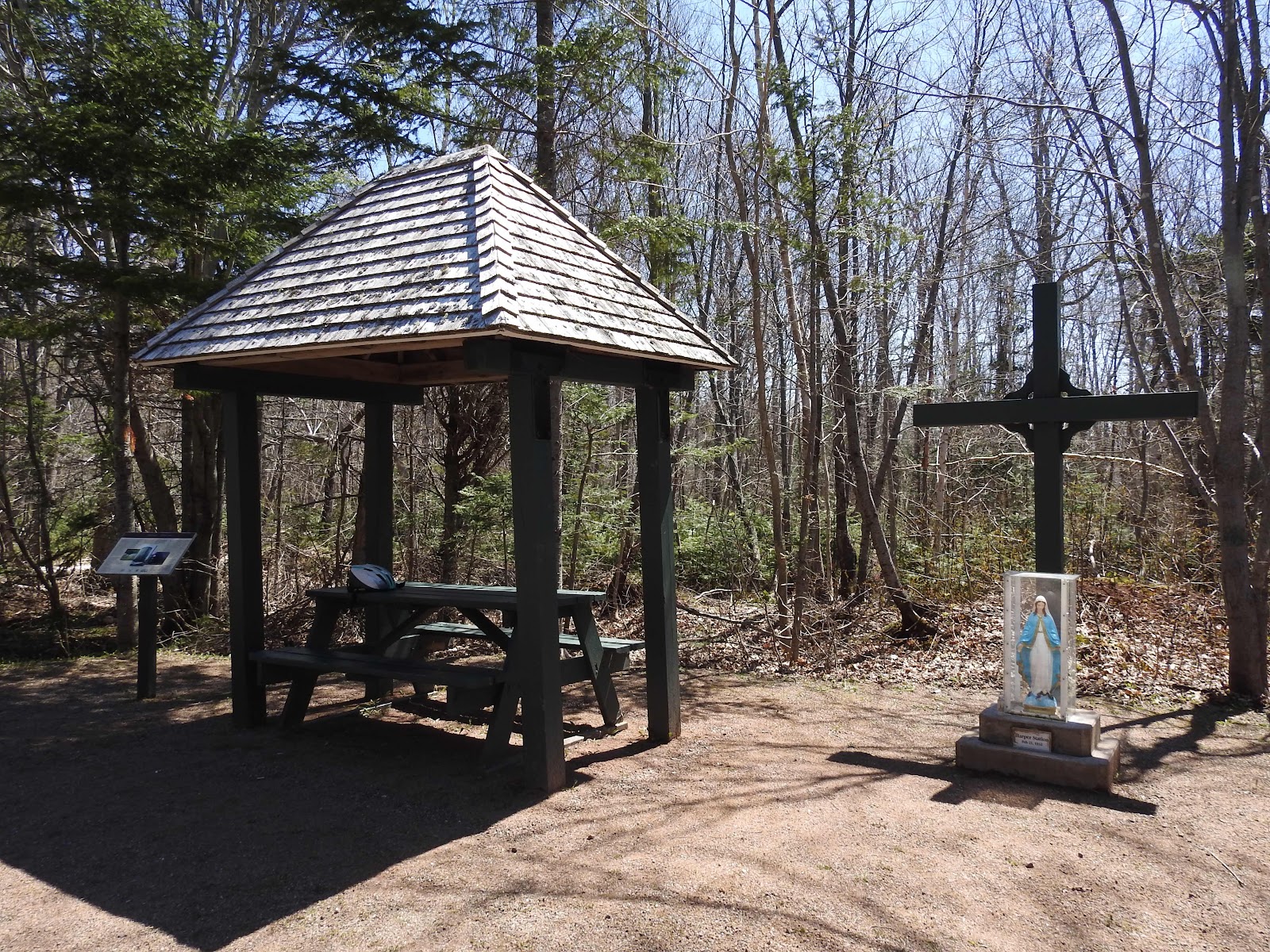 Lots of robins, blackbirds and Song Sparrows filled the trees. The birds are quieter now than earlier this spring. I saw a bird among the trees and watched for several minutes as my husband rode on. It was another familiar bird, a Black-capped Chickadee. I don’t have much luck with ‘new to me’ species. However I like this photo. 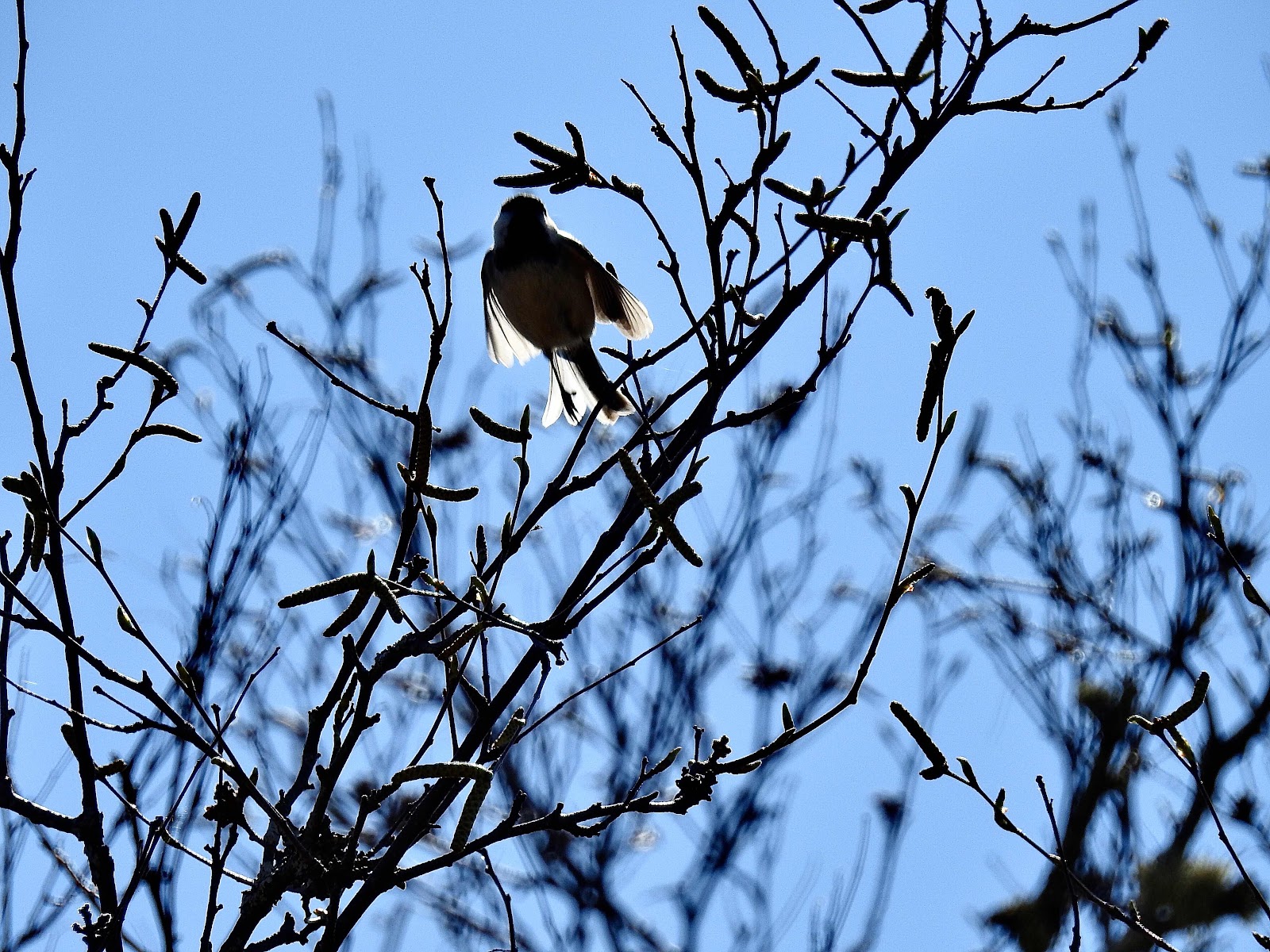 Such is spring in eastern Canada. 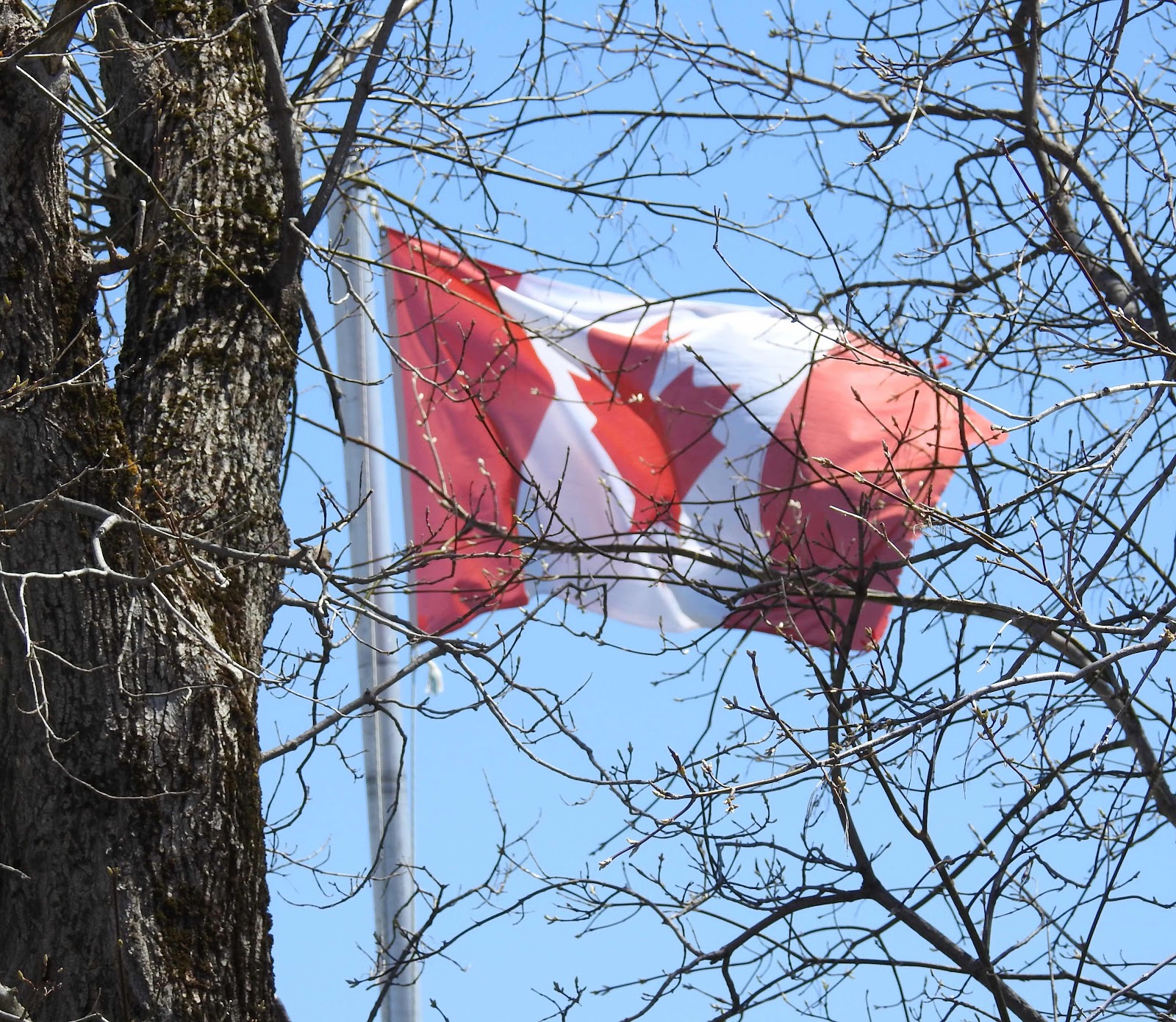 So very lovely! I am glad you are sharing your bike rides with me. I too like that last picture.

I love the idea of a library housed in an old train station Marie, how wonderful. You certainly make the most of your better weather, a most enjoyable ride, I love your wee bird in the tree also, it's like a little angel 💜

Yes, that's a beautiful fieldstone building! There's still a few of them dotting the prairies too, but they are rare.

It's coming along. We have forget-me-nots and trilliums in bloom, the former in our garden, the latter in obscure rural locations.

Lovely to have a sunny day and go for a bike ride. The station is a very interesting building. Is there a lot of stone on the island to build with, or were these stones "imported"?
Nice and sunny here today too.

The old train station is gorgeous! I love seeing the trail start to green up a bit. Fantastic ride! :)

The old train station is a nice home for the library. Here you find lots of libraries housed in old churches. I like that wee bird too, great shot. Thanks for sharing your ride with us.

Such a beautiful building. Wonderful that its been maintained and restored.

The old train station is beautiful, it is nice that it is a library now. The views of the trail look nice for bike riding. The flowers are pretty and I have always liked your flag.
Take care, have a happy day!

I adore the library and the small bird in the tree is a wonderful shot.
Thank you for taking us along too.

Great place for a bike ride.

cute old library... must be nice to sit and read there.

Marie, your posts always bring me so much joy through a connection to my island experiences and thus to my family, that I am longing to visit.
I googled your route and the cycling time given was 1 hour 10 mins one way. I am sure your journey was far longer as you soaked up all of natures spring wonders.
We have driven as far as the North Cape Lighthouse.

My favourite shot today is the tree and grass edges path.

What a pretty area to roam in.

What a joy, a well groomed trail.

There's lots going on in the great outdoors at this time of year.

I know a woman from Tignish. Her maiden name was Doucette and she has many relatives there.

I love marsh marigolds too. And what a beautiful railway station/library.

Wish you a happy weekend Marie!

Oh, that photo of the Black-capped Chickadee is fabulous. I think its a real wall hanger.
You have such glorious places to bike. I like the wide trails.
Sue

Beautiful photos, the light through the black capped chicadee's wings is a gorgeous photo.

What a lovely bike ride, I miss cycling, I don't have the facility to drive to a starting point, and the roads around where I live are just too busy nowadays. I'm a real fan of old buildings and railways. I'm glad the old station has been given a new lease of life. Beautiful photos, great capture of the bird.

awwww a new spot, how nice to see them caring for the trails and making it assessable for all!! that is one beautiful library, i always love when they convert the old and make great use of it!!

the image of your beloved flag, so special!!

Such a beautiful post and share - thank you. I also love the marsh marigolds and have never actually seen any..

Hi Marie, I am one who loves railroads, especially railroad history. Thanks for the photos of the old rail station and info on how they have turned the old PEIR roadbed into a very cool trail. I collect railroad memorabilia and I’m going to see if perhaps I can find an old brochure or timetable for PEIR. I’ll bet they are hard to find these days. Thanks for another fine post on Island Musings. John

the library and old railway station look so fascinating !

you are blessed to have privilege for wandering among such exquisite sights and nature dear Marie :)

the chickadee photo is outstanding indeed ,you have way with your captures i must say !
the trail 's first image is captivating too !
best of luck for your rides my friend ,you seem also like sweet birds wandering and flying during spring season while singing praise for nature :)

I love that train station turned library. Seems like train stations are always beautiful buildings...and I love stone anything.

That path with the trees is spectacular!