Back at the Grove

When we arrived at Cavendish Gove and exited the car, a tree on an island in the pond had noisy grackles and blackbirds competing for loudest bird in the area. By the time I could take a photo, there were only a few left in the tree. 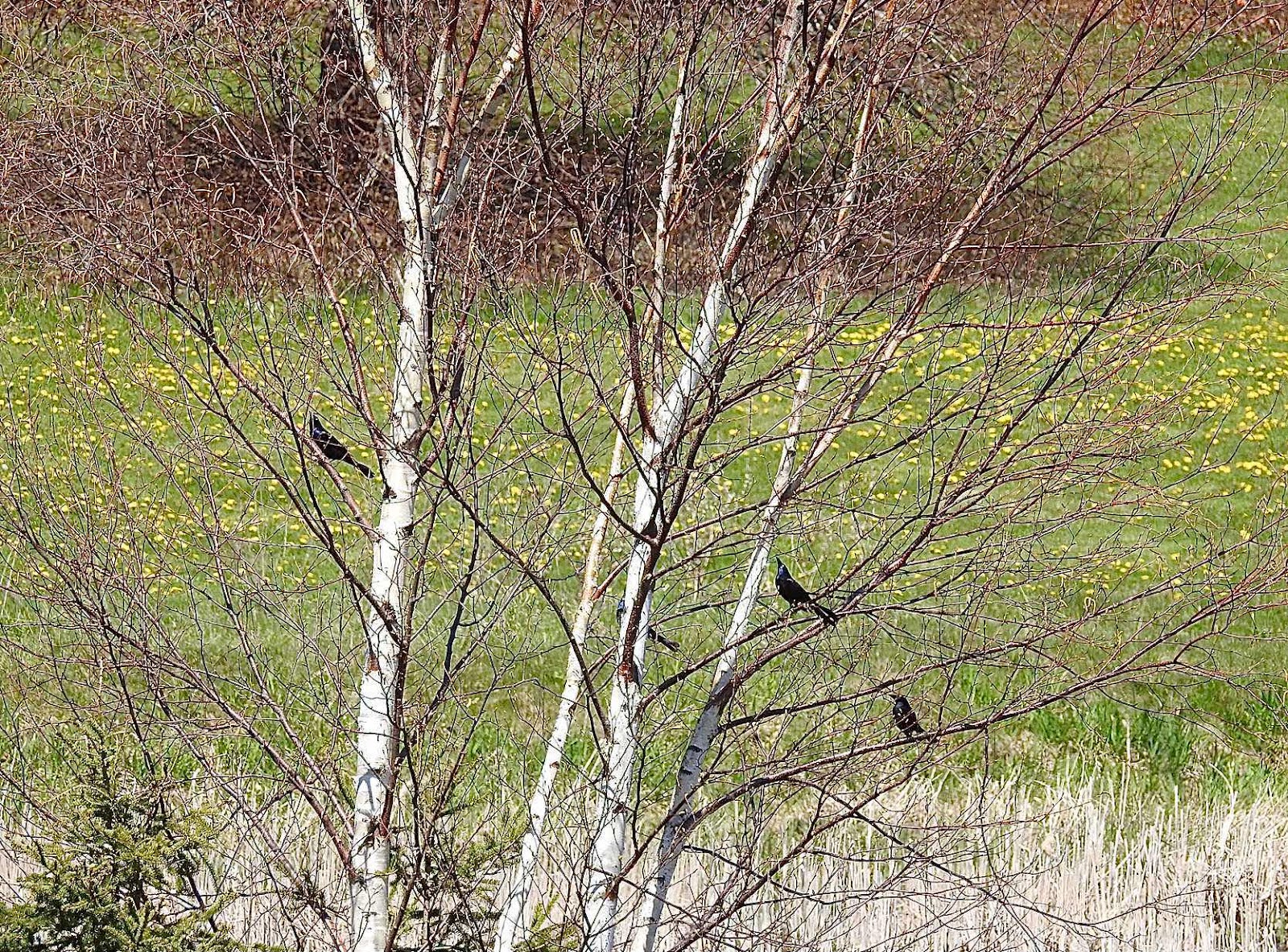 We had a pleasant surprise too. One pair of Canada geese had six goslings. Already this spring, one nest hadn’t any survivors. Over the past number of years though, my husband and I have seen two sets of goslings in the Grove, so we shouldn’t have been surprised to see one goose family there this year, which was great! 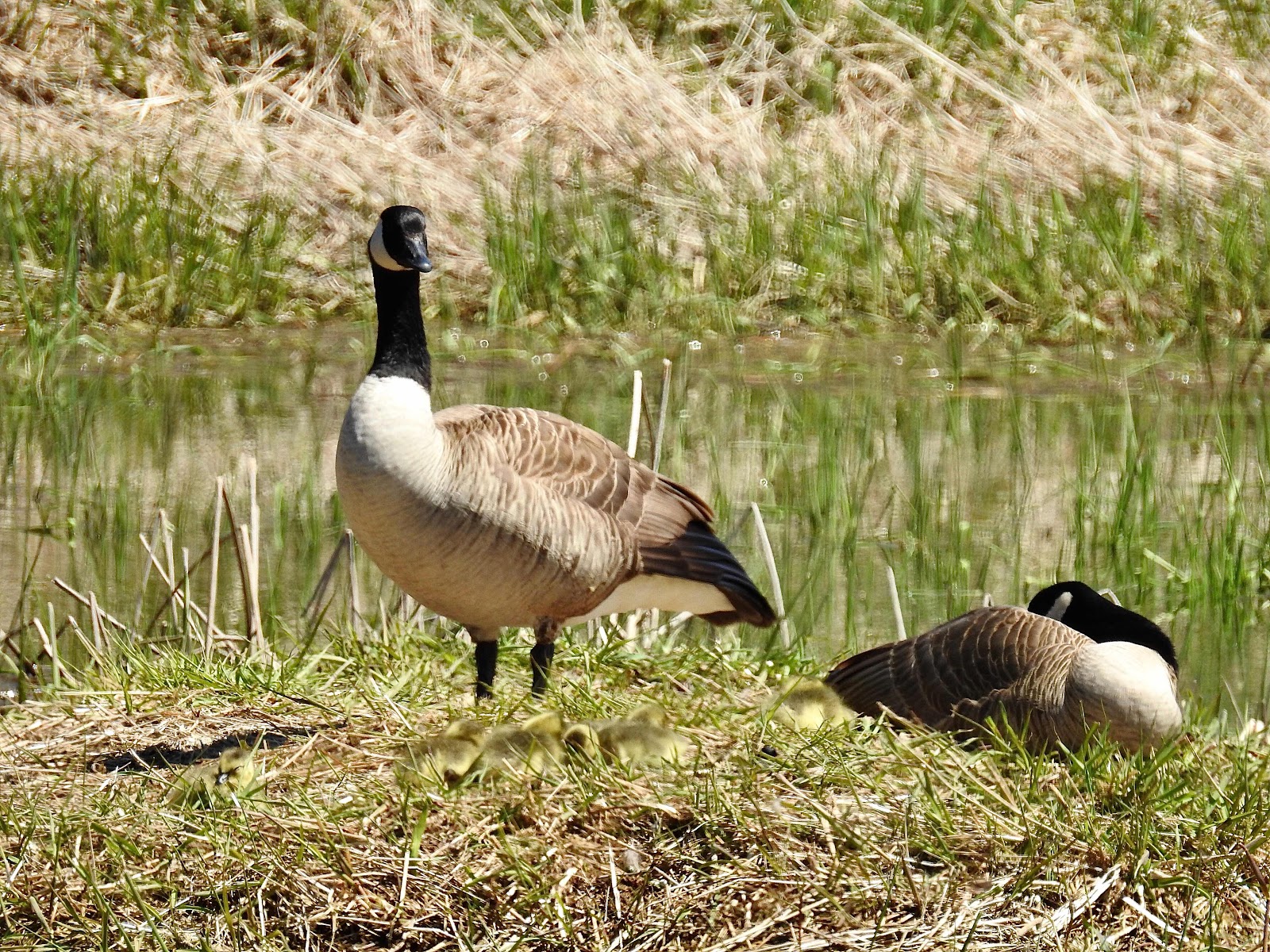 Canada geese are such wonderful parents. It is always fascinating to watch them, as both parents stay involved with the goslings, unlike some bird species. One parent leads the goslings around and the other stays behind, protecting the young ones from potential predators or from straying away.

As we watched, one adult led the six balls of yellow fluff and dabbled on the way, the goslings behind watching the upended bottom of the parent. 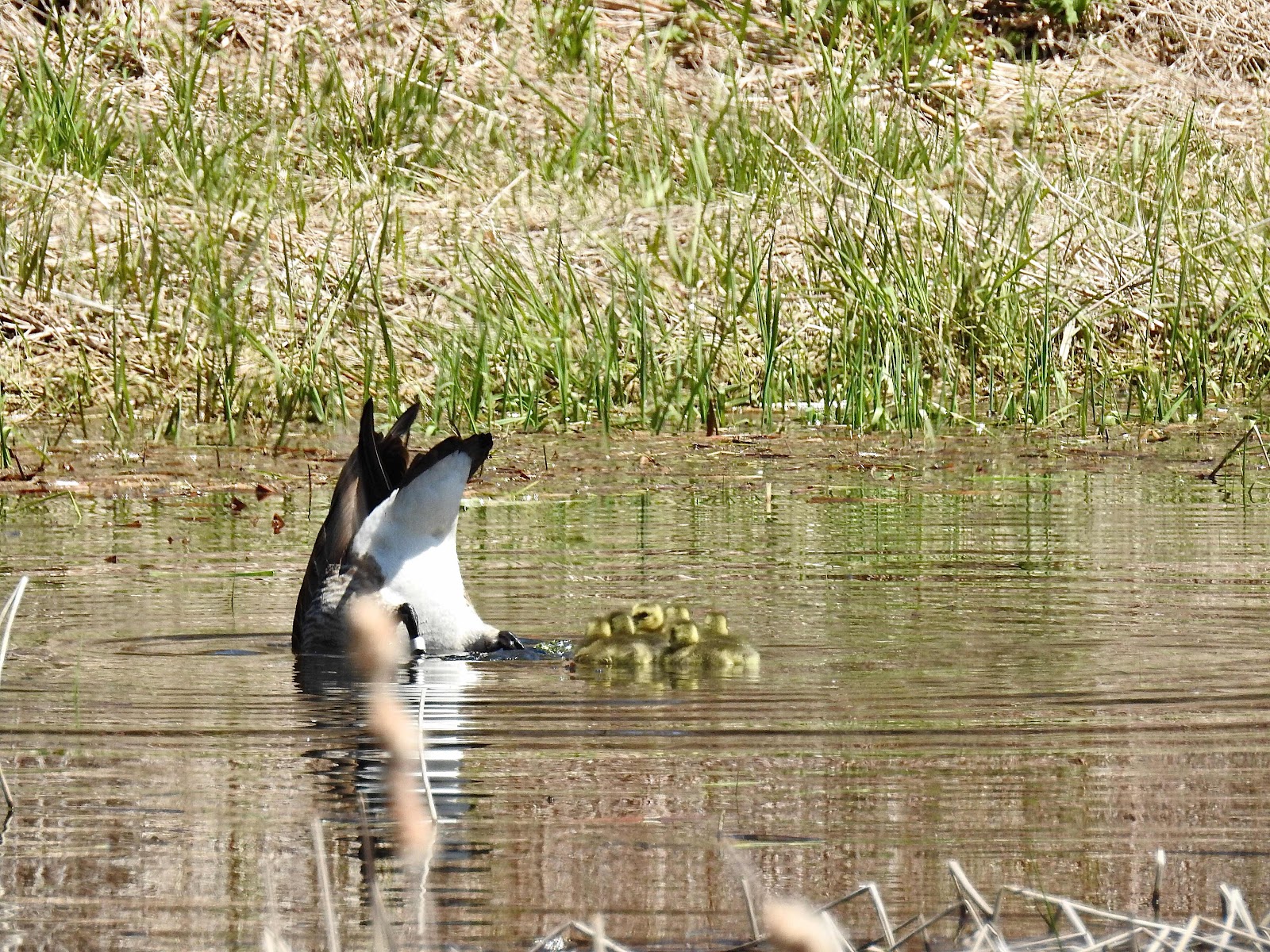 After a short interval among the grasses along the shoreline that adult headed back into the pond followed by the goslings and the other parent. One gosling had taken the lesson seriously and dabbled a bit too. They are fast learners. 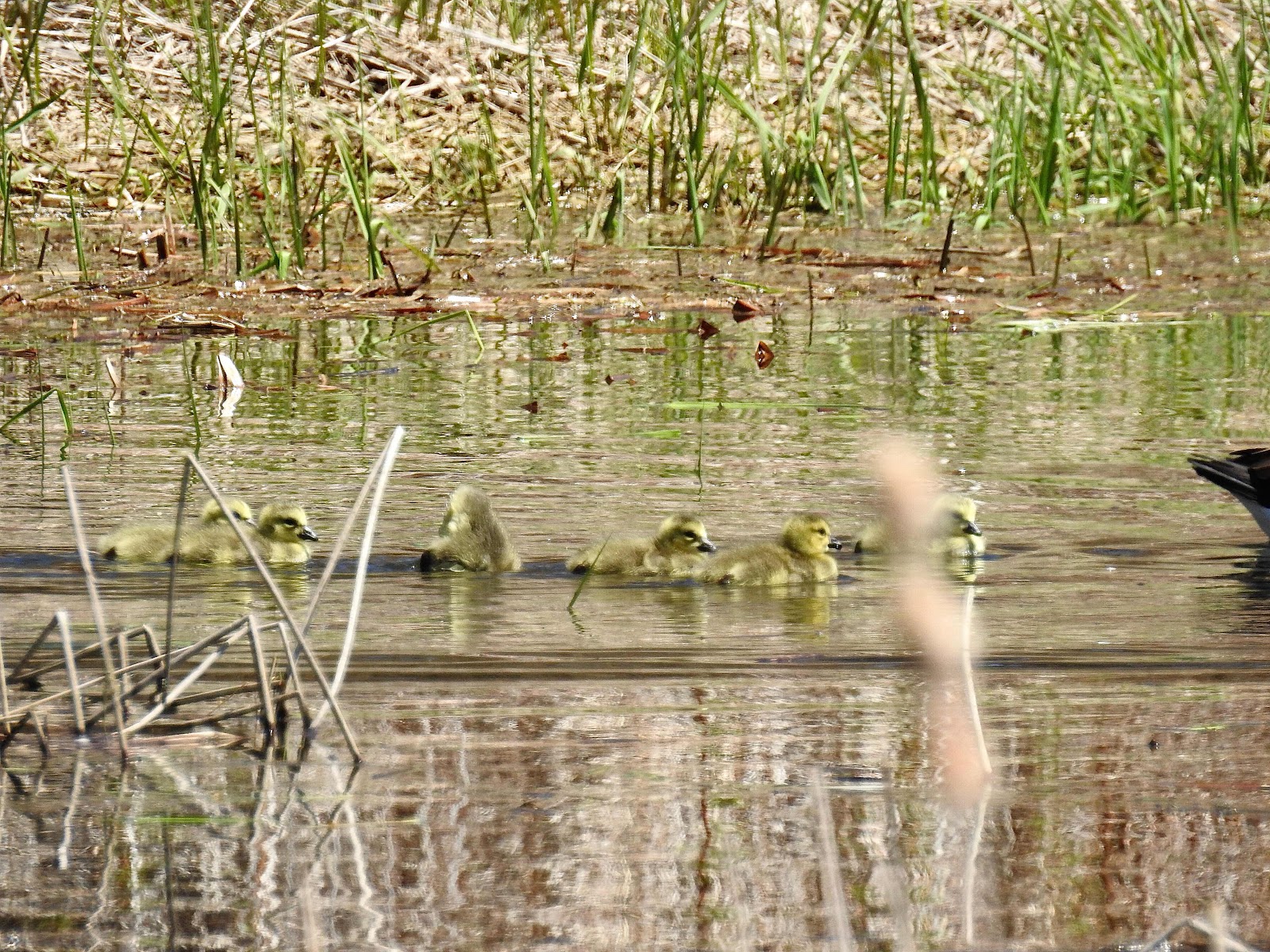 In the nest area, both parents were settling in as the young ones did the same.

Meanwhile, Gadwalls and Mallards swam around the pond, dabbling as well. 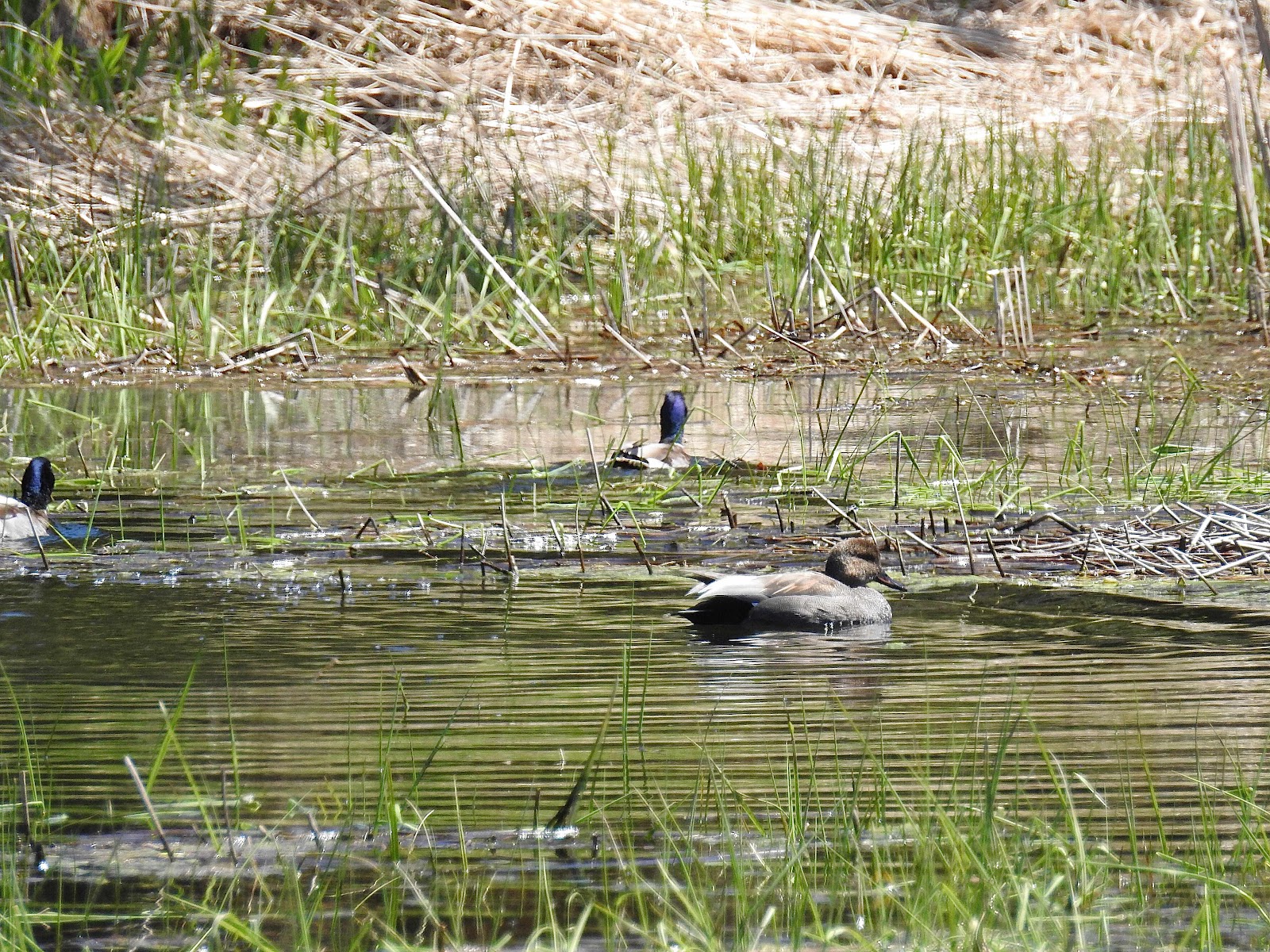 They co-exist nicely with the geese as we’ve seen before in the Grove. 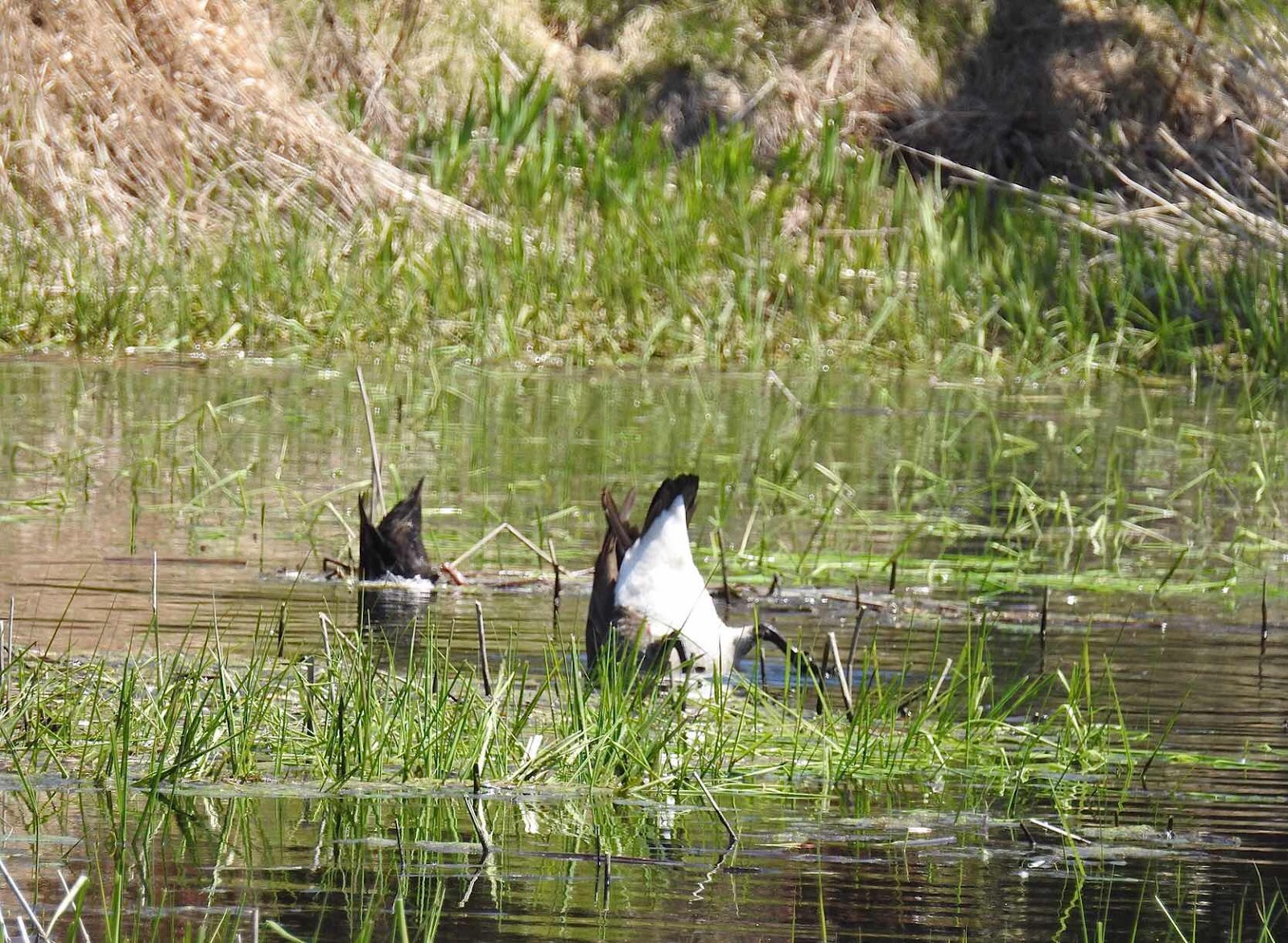 Elsewhere in the park, the Cavendish sandspit has been closed to visitors for the summer to protect the nesting Piping Plovers I mentioned a few posts previously. An article by the island’s CBC station can be seen here.

A couple of days ago on my walk, a couple of big Canada Geese flew overhead, honking all the way. They were easy to hear even over city traffic!

That is a nice story about those big birds. The University of Waterloo has a lot of geese permanently residing. When they are guarding eggs, they become very aggressive. Students will get advised to which entrances must be avoided.

I didn't know that is called dabbling. It sure is funny to see! Such great pictures, and I hope those cute balls of fluff will survive. :-)

I love seeing all the babies most of all. :)

What a delightful family Marie, the goslings are so adorably fluffy, lovely to see both parents pulling their weight. If only we humans could coexist as well as birds do 💜

Are grackles and black birds, louder than blue jays???????? -smile-

The babies are just adorable, cute shots of the goose family. I like the bottoms up duck photo too. Take care, enjoy your day!

We used to jokingly say that I looked like Father Goose when I took the kids to the school bus stop and waited until the bus came. I didn't usually stand on one leg though.

the Geese are so stately and family natured.
Love the photos of the upended ones and that little guy "practicing" his moves too.
You had a wonderful ride as usual.
Sue

Grackles are such dirty birds. We don't see many around here. Your pictures of Geese are wonderful, some nice action photo's.

That is a perfect word.

Love those butts. And the golden fluff balls too.

The goslings are so nice to see. A lovely family moment seeing them all in the water learning their daily lessons from their parents.

How do those cute balls of yellow fluff turn into the messy, aggressive and noisy adults?

Watching nature and how these birds take care of their young is so special.

Another beautiful day of sunshine and delightful birdlife.

Did you know that during the time they are raising the goslings the adults are molting and can't fly for about six weeks? And that parents of more than one goose family will join together to share parenting duties, perhaps to have more eyes watching for predators.

That upended gosling is worth the price of admission.

That is a great word for that particular behavior. And now I know it too!

I'd say it was a really good day.

The geese and ducks get on fine together.

it is amazing how "most" of nature get along well!! those little fluff balls are adorable, you got some great images!!

I just adore the little ones in these families, Marie, and love how you follow them where you are. Mother Nature teaches us so much, if we but watch and pay attention!

It's good to see everyone getting along!

Love the ducklings. Love the upendings.

Adorable photo of the dunking gosling.

darling little things.
Coffee is on and stay safe

such a pleasure to see them back :)

i too hardly had noticed that both parent look after the children ,duck and hens were around me in village but mothers took the whole responsibility of babies ,how great it is not same with Canadian ducks :)