As we travel around Prince Edward Island, my husband and I often see things we like, appreciate or find amusing. There is always something to grab our attention along the way as we cycle or walk the trails of the island.

Early one morning last month, this Cadillac was parked at the boardwalk.

Look at the length of that beauty and those curves! What a treat to see such an oldie so beautifully restored.

We often see Great Blue Herons around the beaches and waterways of the island. This one by a friend’s shed cast a shadow on the wall. Reflections not shadows are a more common sight around herons here. 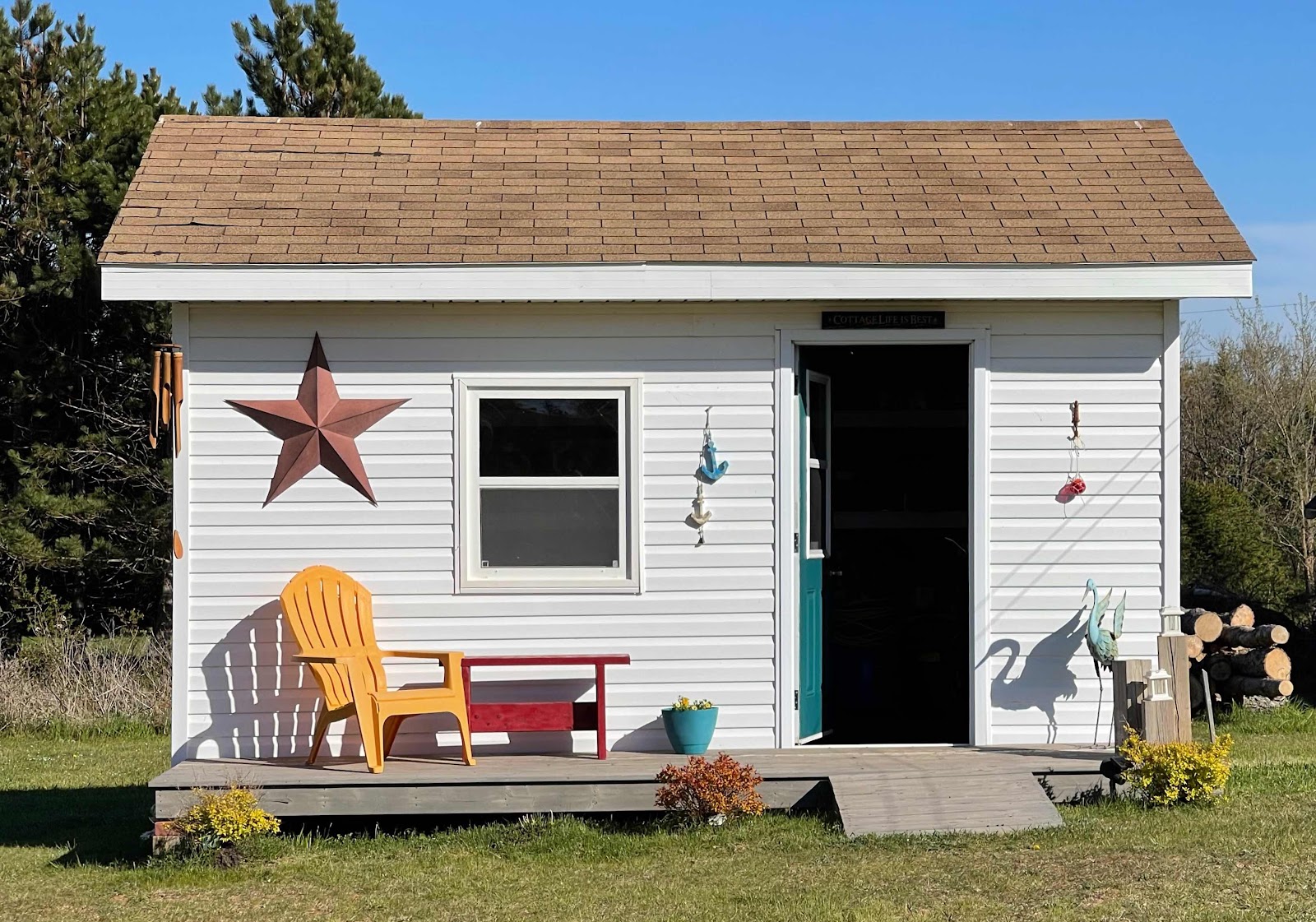 Along the Confederation Trail, as we approached the community of Winsloe, someone had placed an old milk can over a tree limb. I’ve seen a few of these in different locations around the island. I wonder who last used this one? Walkers along the boardwalk in Summerside leave feeders with seeds for the birds and other animals. One of the recent additions is this trailer, a unique feeder. It looks like someone enjoyed a nibble on the trailer as well as its contents. 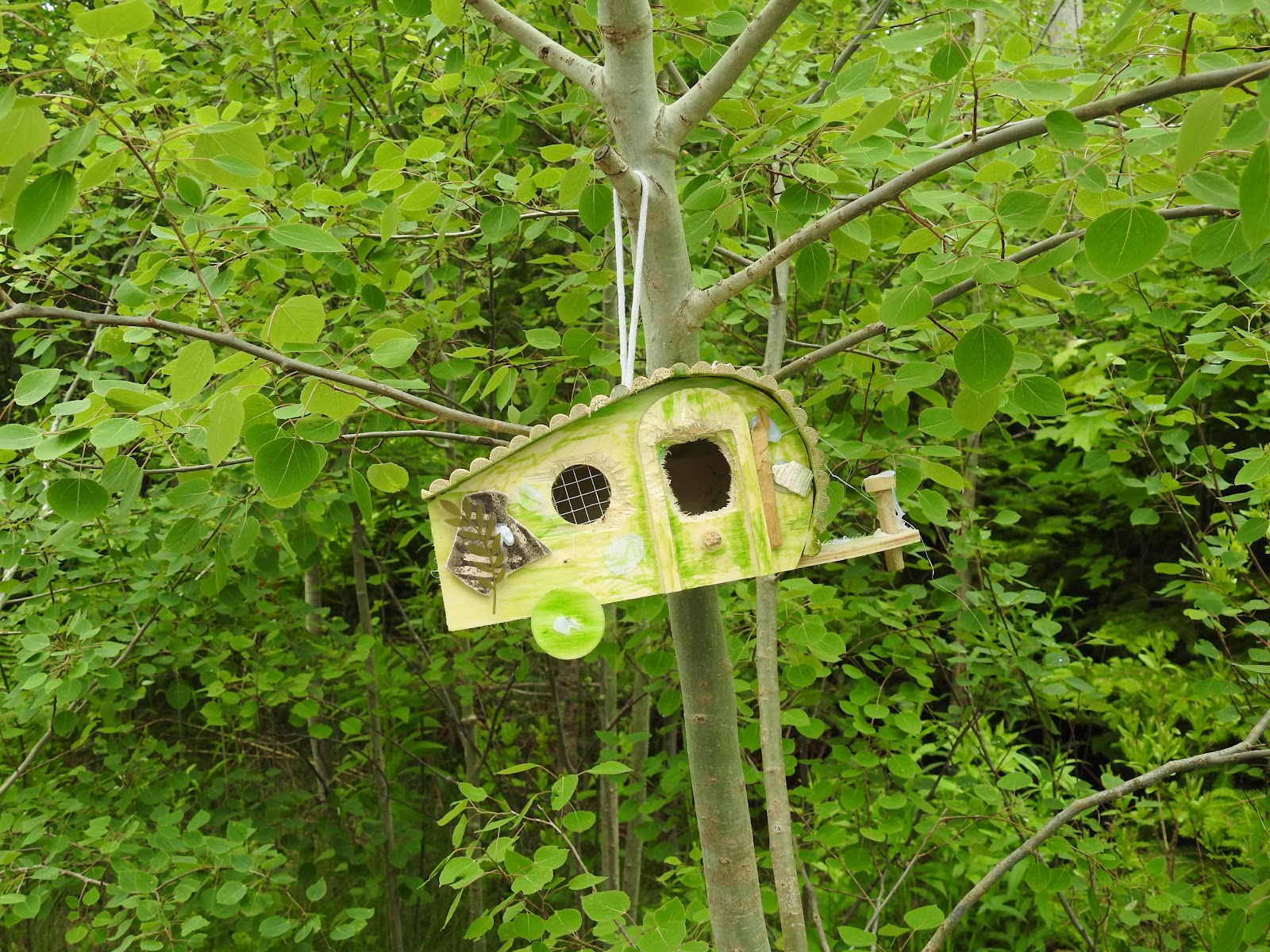 Theodore Tugboat was a Canadian Children’s television series with a model set of radio controlled tugboats, set in fictional Big Harbour. Theodore, the main character wears a red hard hat. The series was produced in Halifax, Nova Scotia, where a life size tugboat was fitted out to resemble Theodore. That tug visited Summerside this past week and we caught a glimpse of Theodore Too as he left the Harbour. 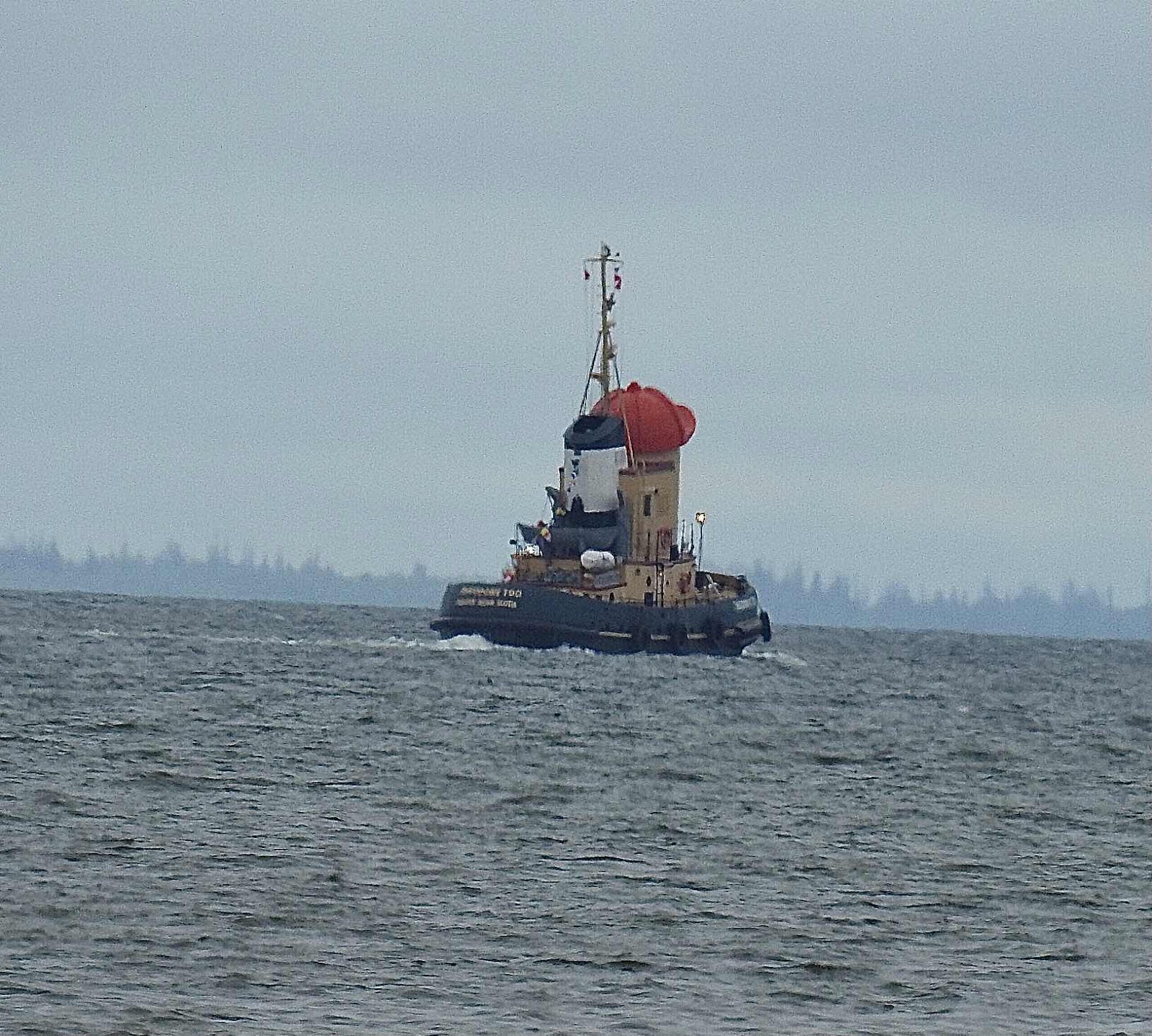 On the Confederation Trail near Winsloe, someone put a few Christmas decorations on a tree by one of the picnic stops. It is surprising any stayed on the tree with the wind gusts we have on this island. 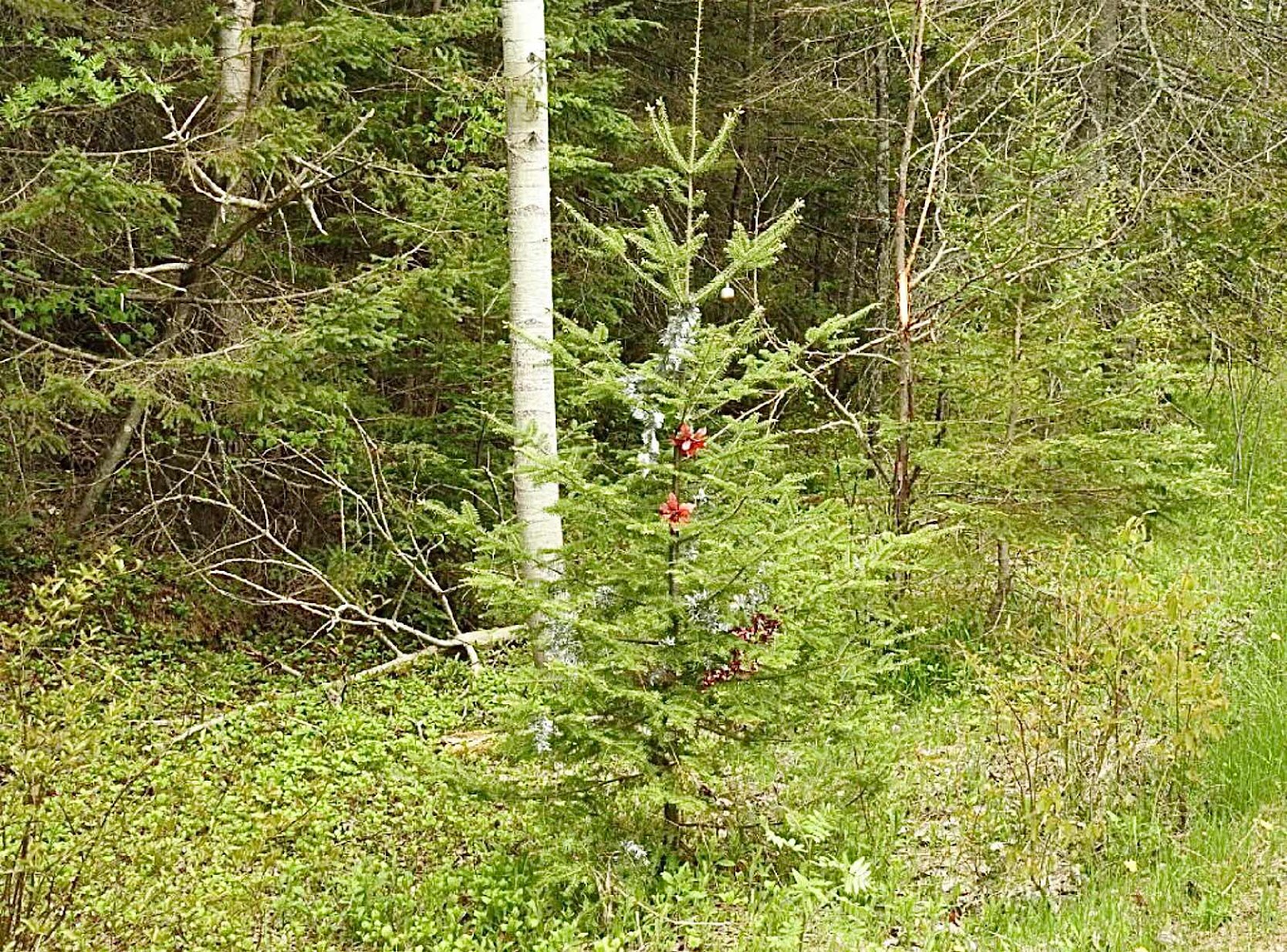 It’s been a year of lemons. Is it too soon to celebrate life getting back to normal? 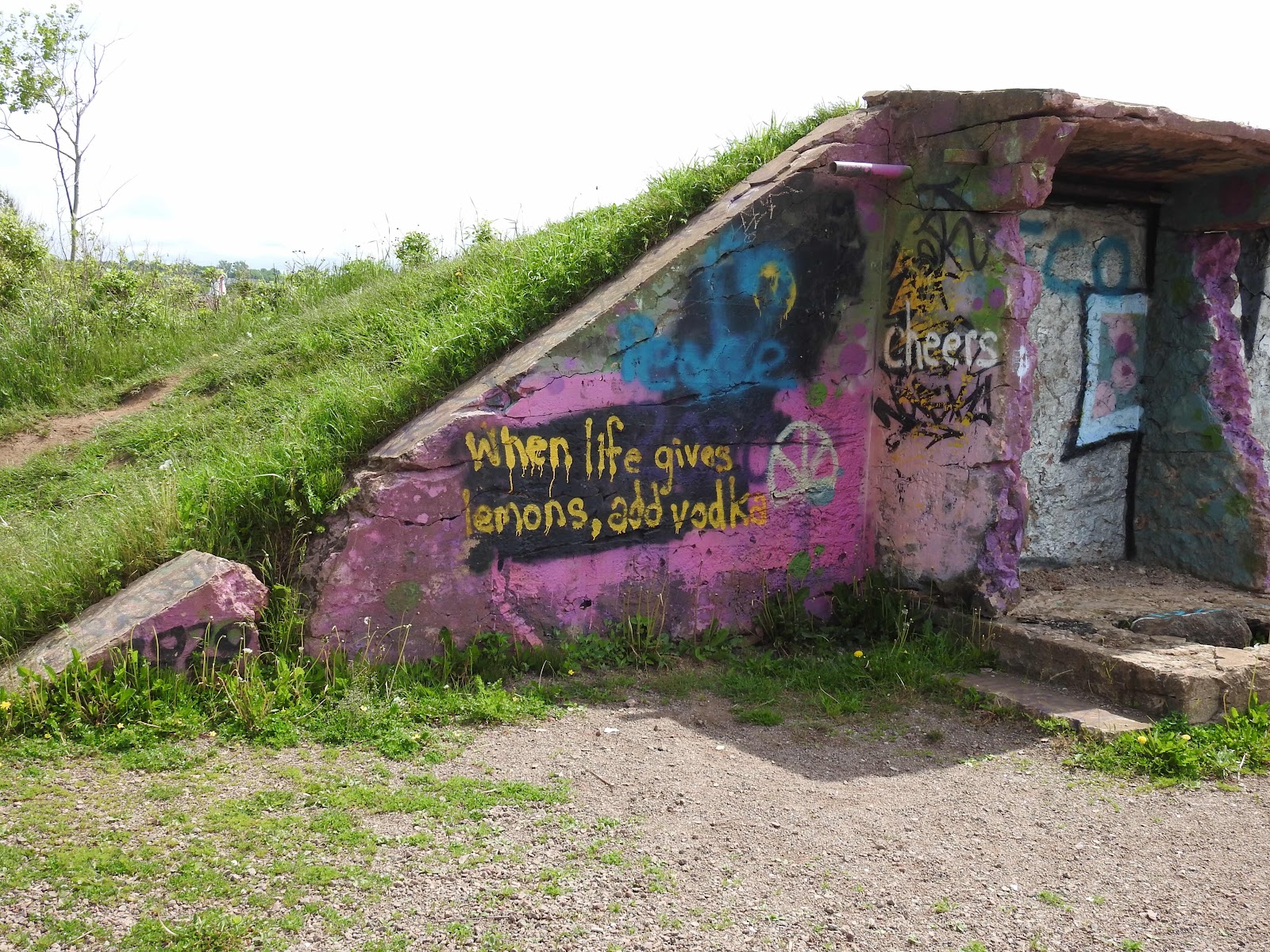 You'd have trouble finding a place to park that car, or even executing a three-point turn, in most English towns. That's an extremely smart shed.

Hi Marie, My wife walked in with a cup of coffee as I was looking at your post. She said to tell you your pictures are great. Her favorite was the shadow of the heron. My favorite is the milk can on the branch ... that is just a fascinating picture. Your question on that is perfect ... how many years? You won't be surprised to know my second favorite is the tug boat. :-) Have a happy weekend! John

That car is gorgeous! I enjoyed all of these nice little surprises today. Thanks for sharing them with us Marie. Have a great weekend. :)

Wow, those are amazing tailfins. Quite a shout from the past. I'm still cautious about going out but not about being in the outdoors. What is that little concrete creation with the messages on it. "Cheers"

The milk can in the birches certainly made for a nice picture. We saw that tug on a brief stop at the Halifax Pier in 2010.

Hello,
It is fun looking for treasures and sights during our walks.
I love the Heron's shadow. The trailer is a cute birdhouse.
I am glad to see the past year, in the past. We can look forward to normal times again.
Have a happy weekend!

Ohhhhhhhh that gorgeous car!!!!!!!! What a beauty! And how much love, devotion, and work, and money, went into it. -smmmmmmmile-

My husband loves old cars/trucks and has one of each.

The tugboat is precious!!!!!

You do find some unique things. That is a metal heron, I hope? Like AC, I like the milk can. What we find, still, in our bush are sap pails left over from previous owners' syrup making. The pails are pretty rusted out, as the old tapping was done pre WWII.

I smiled at the tugboat, and love the pictures, all perfect in their own way. I am so glad I get to travel around PEI with you!

Love the fins on that old Caddy! Yowza!

I've seen Theodore Tugboat a couple of times at its home in Halifax Harbour. But now it's been sold and is moving to Hamilton, Ontario's waterfront. That's probably why it was in PEI last week -- on its way down the St Lawrence to the Great Lakes and then to its new home!

Gosh that Caddie is glorious. Those were the biggest fins.

When I look at that big and beautiful car I think immediately of the fuel it would consume.
Thank you (so much) for sharing less usual (but no less beautiful) wonders from your area.

Great car pic. The heron shadow is lovely, getting ready to fly but never quite getting there.

They certainly don't make cars like that anymore but it's still a beauty after all these years. I love the tugboat and the milk can hanging on a branch. There are always nice finds when we walk and take photos. Have a great weekend.

I am not a fan of American cars, too big and too thirsty, but I must say it looks beautifully restored. Love the nibbled feeder, maybe someone had ideas of making the hole bigger for a nest! Keep safe Diane

An eclectic mix of shots.

A delightful collection of unusual things observed under sunny blue skies. The Cadillac is extremely impressive but my favourite is the caravan bird feeder.

That's quite the Caddie!

A series of years in the fifties featured cars with fins, some extreme.

Those who make an effort to always be outdoors are often treated with great sights. I also like the Cadillac.

PEI is one of the places I want to see. Thanks for the beautiful photos!

I bet caddy just pur down highway.
Coffee is on and stay safe

It's amazing to think that we all drove cars that size! It looks like a land barge. I might call it many things. Beauty is not a word that springs immediately to mind!

love a unique feeder. and of course the words: "when life gives lemons, add vodka.".... hope, we are getting normal soon.

the heron shadow is remarkable capture indeed ,the car was also so intriguing though i could not figure out which was his front side lol

loved each image ,yes it is great that life is about to get back on it's track
more blessings!

Very interesting things along the way!!

This post is just delicious with all the wonderful photos.
That Cadillac is a real show stopper..a huge gas eater though.
Great shadows and I really like that hanging milk pail.
Such treasures on your outings.
Sue

I love that old caddy. I wish I had a great old car but I probably don't have the strength to turn a corner like I did in my '50 Ford. Hahaha. I love that trailer bird house too. I need to keep my eye out for one for my daughter.

Wow! That Cadillac is as long as a boat! What a beauty!

Lots of fun things! The Cadillac is a beauty!

Excellent series of shots Marie, you certainly do see some eclectic sights on your journeys, what fun to see Theadore Tug Boat with his red hard hat, so cool 💜

I love that shed....nice. And the Caddy.....WOW! I like finding the different in the world, like the milk can in the tree. HAHA

Oh my, that Cadillac is stunning! Very nice photo. The tugboat is adorable.
Happy Summer!

My first car in the 1960's was a chevy impala with big wings just like those in the Cadillac. Loved all your photos.