On the Trail again

It is almost a month since my husband and I rode our bikes. I had hit my hip on one of the gates on the Confederation Trail and finally, on Saturday, my hip felt better. It was a slow recovery but all fells well again. 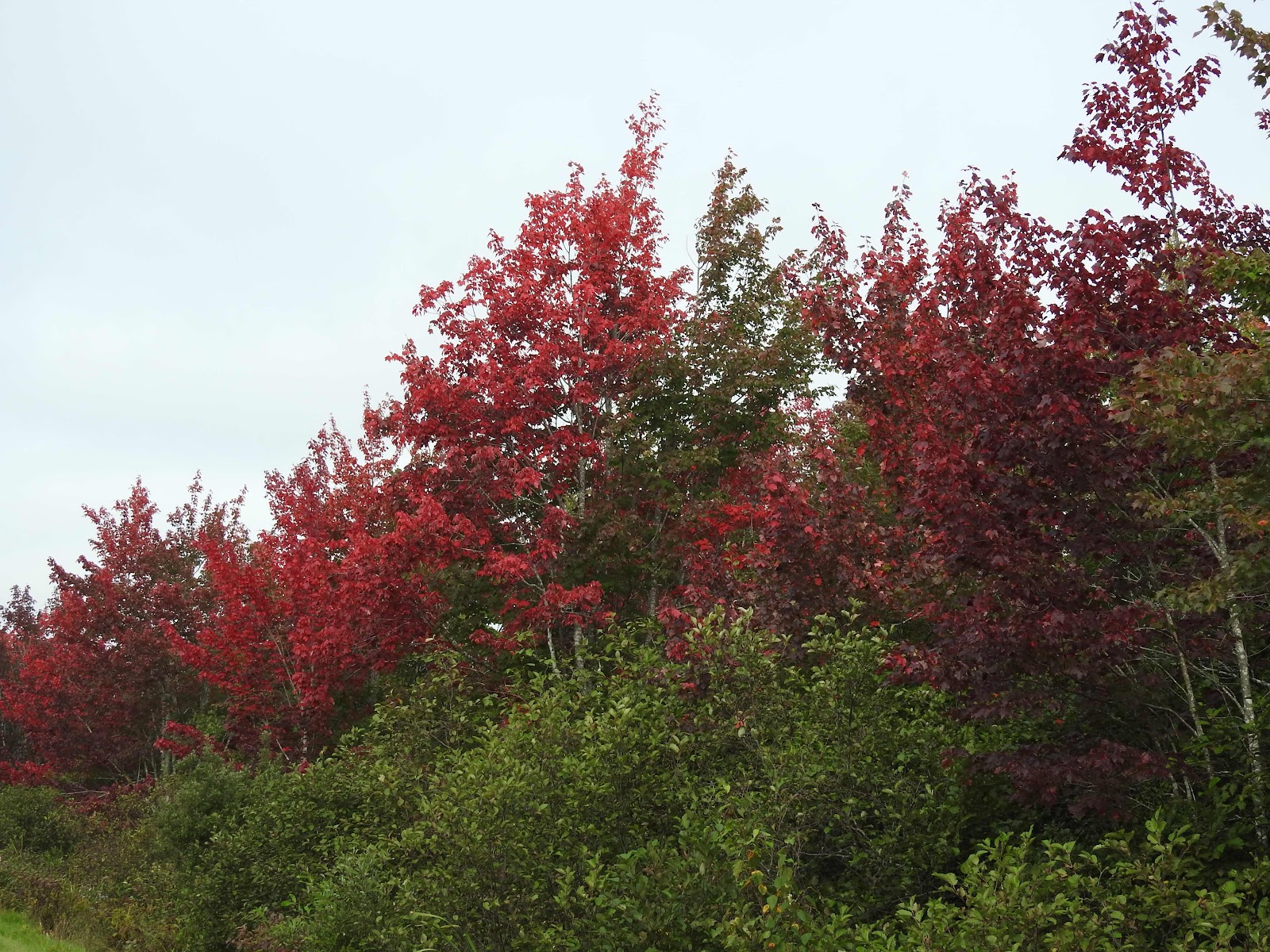 The dark green of pre-autumn colour lines the trail where other trees dominate.

The Mountain Ash trees are loaded with berries this year, probably the most we’ve ever seen. The orange berries hang from the trees tempting one to pick a few though they don’t have much taste. 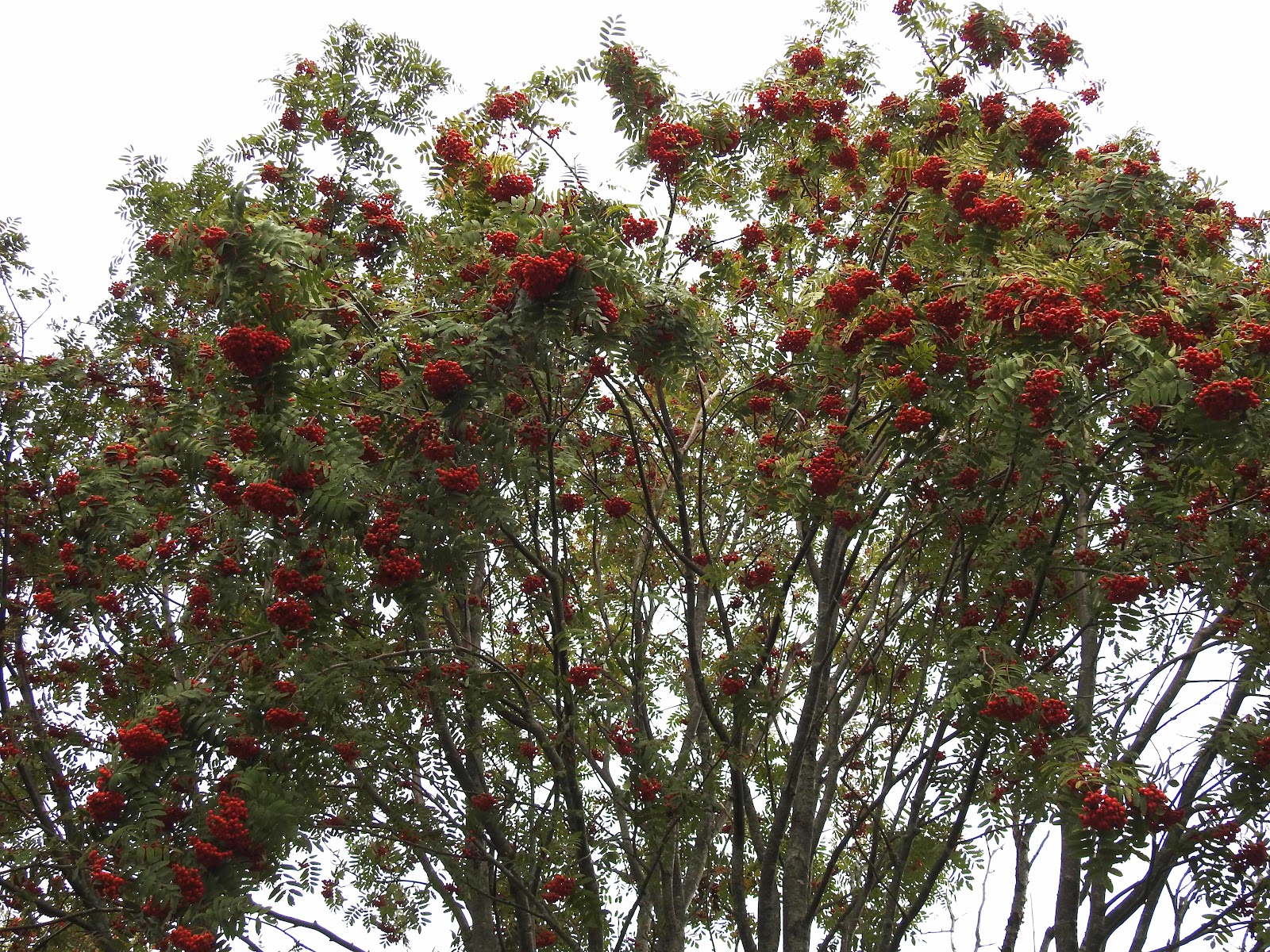 Some time ago, Judee at https://www.realfoodblogger.com mentioned Mountain Ash was also known as Rowan and has folklore associated with the trees which goes back centuries.

I had only known Mountain Ash/Rowan as Dogberry trees. The only folklore I knew was the Newfoundland weather lore which maintains that a year with a lot of orange dogberries on the trees meant a bad winter was in store. By the look of the trees this year, there will be a terrible winter.

Further along the trail, the horses were out in the barnyard again and were too busy eating to pose for photos. 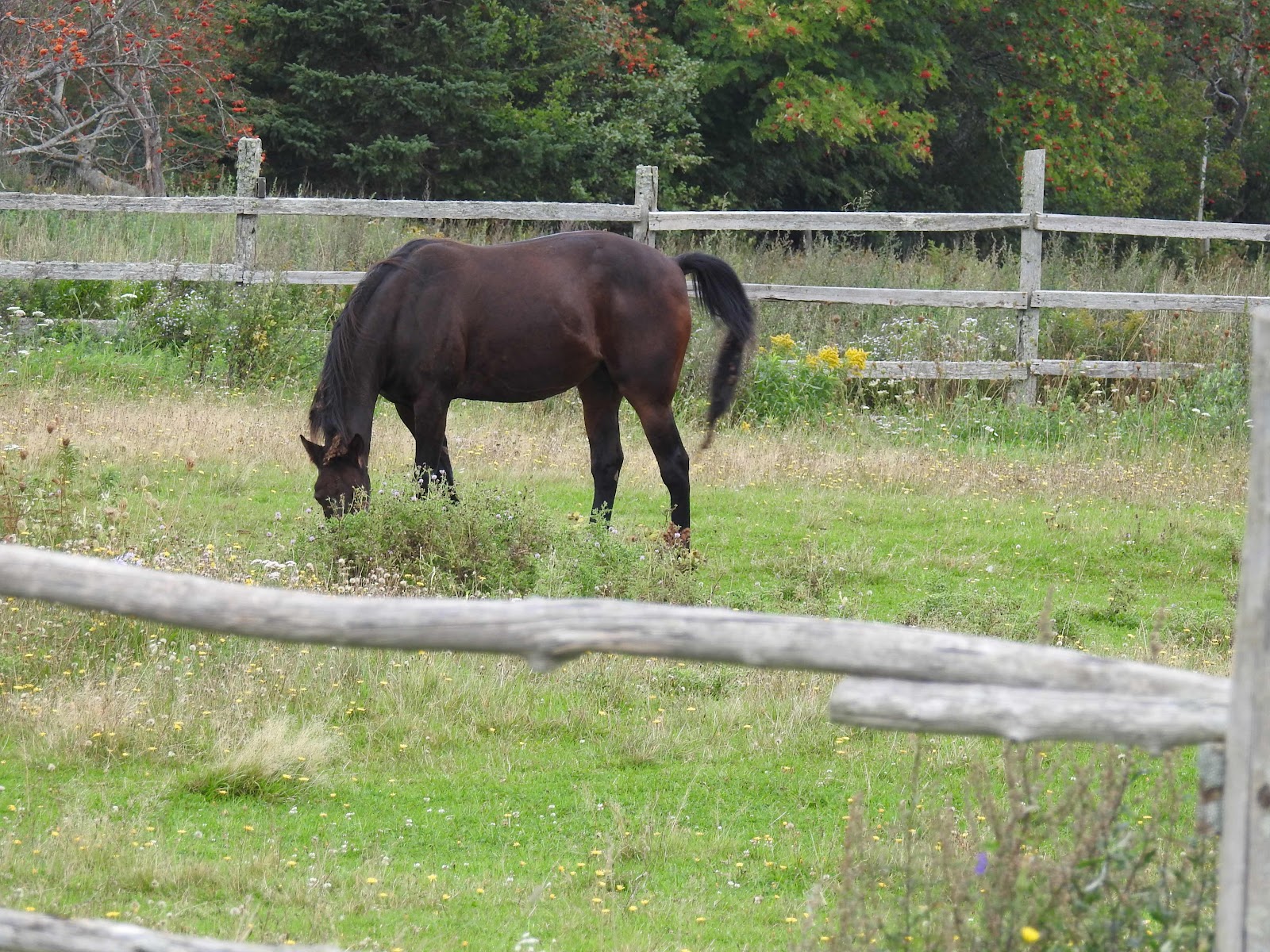 The last of the wildflowers fill the hedgerows. Asters and Goldenrod take up much of the area. 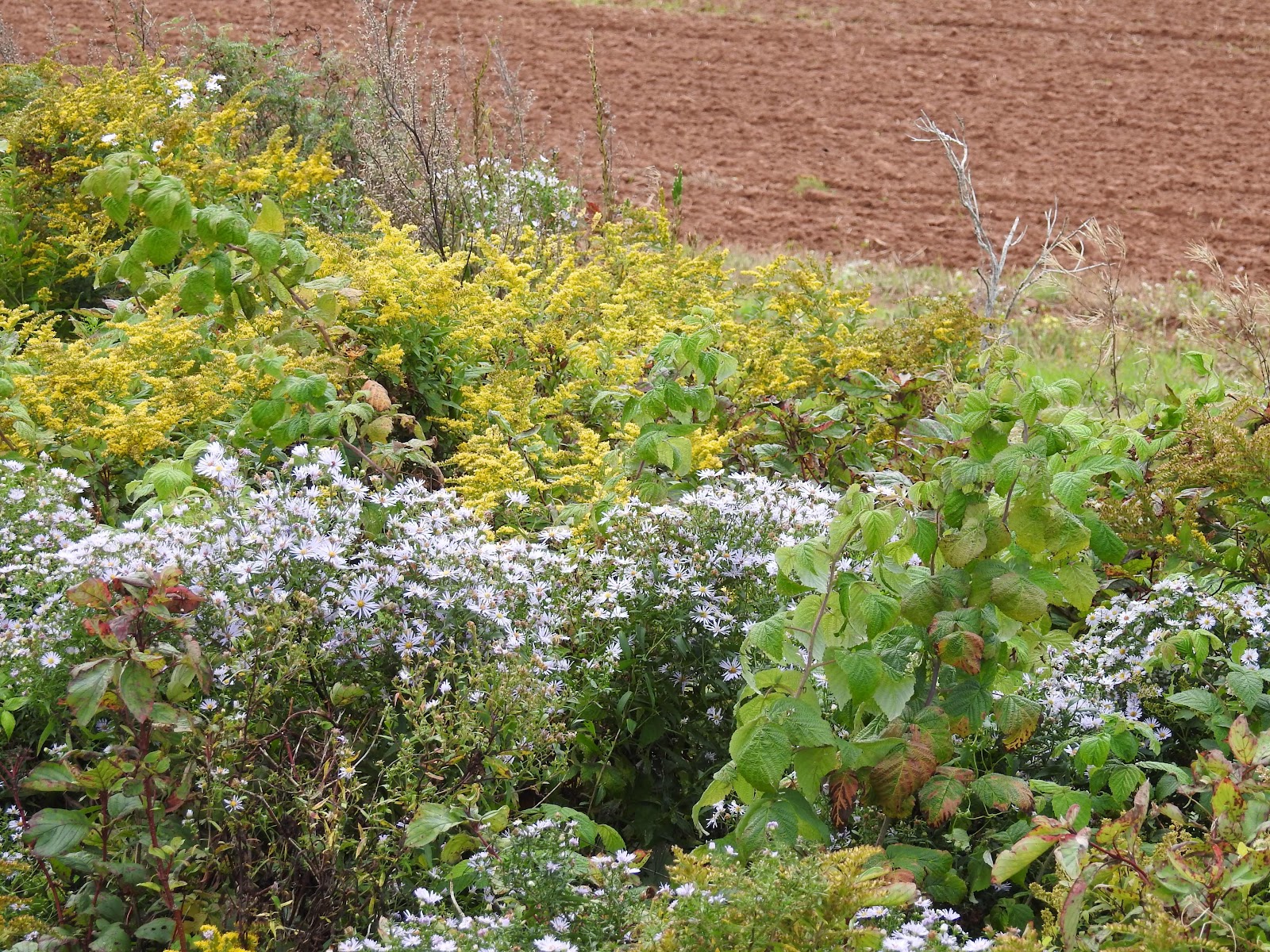 However, the bright greens of summer are rusty now as darkness encroaches upon the daylight of summer. 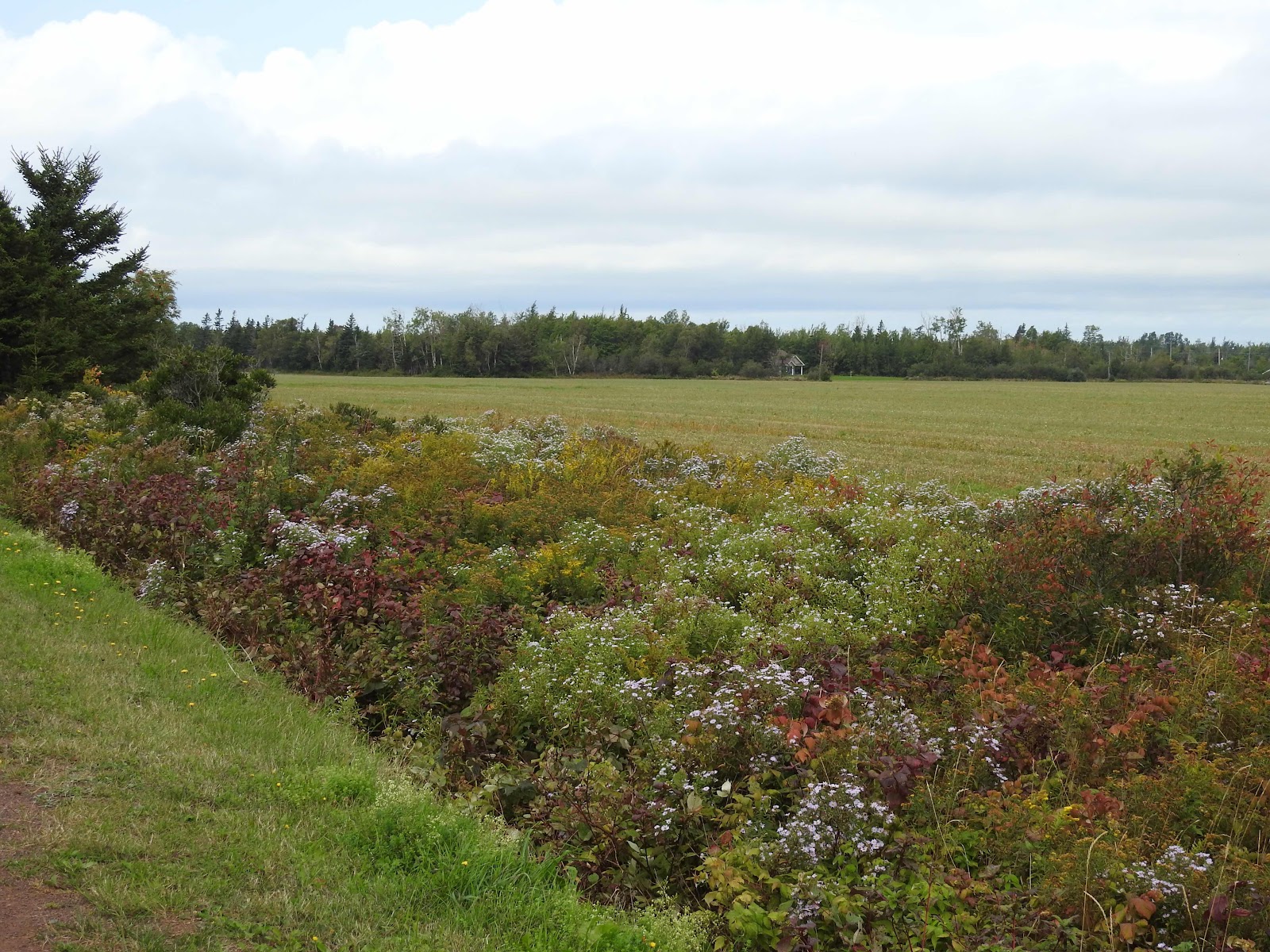 It is difficult to describe one of the experiences we had during that recent ride. We were on the home stretch and noticed dark coloured birds ahead on the trail. I thought they were European Starlings which usually travel in a flock. We approached the birds but they stayed as they were which was strange indeed. My husband rang the bell on his bike and the trees around us came alive with birds, which flew over the trail, then ahead of us along the trail, as we followed them and those which had been on the ground. After thirty seconds or so, the huge flock disappeared into the trees again. 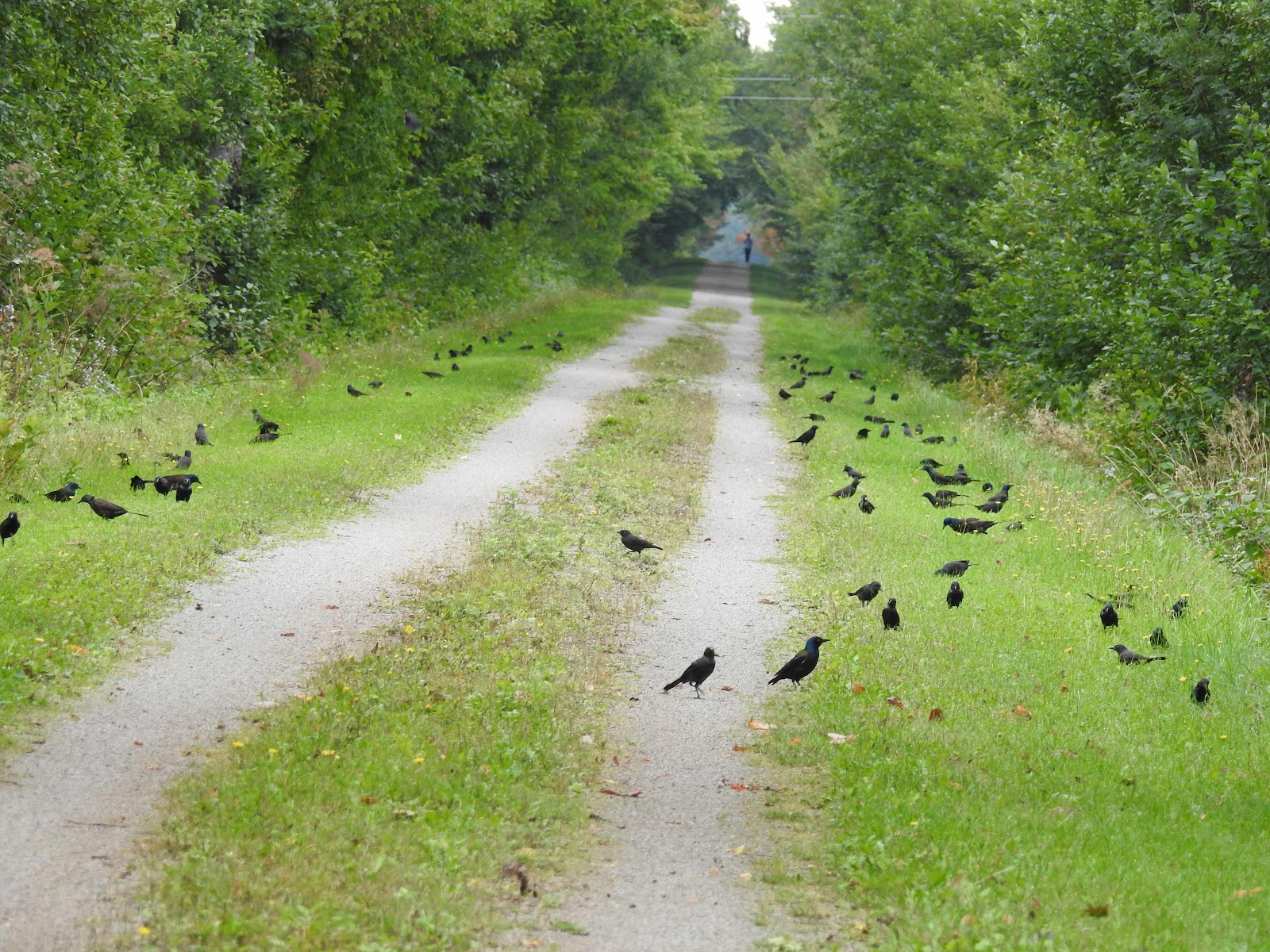 On closer examination of the photos, we discovered they were Common Grackles. I couldn’t take a photo quickly enough but it was a phenomenal experience to have the large flock flying ahead of us as we rode along. Later, we realized our daughter was the runner visible in the distance in this photo.

It is good to be back on our bikes again on the Confederation Trail with its wonderful surprises.

Good that your out on the trail once more; I had an accident like that several years ago. The Mountain Ash trees I've seen in the UK are also bearing more than the usual amount of berries this year.

We call them "mountain ashes" in Alberta. I knew that in Britain they're called "rowan" trees, but "dogberries" is a new (and fun) term to me!

Beautiful shots. Red maples here are always the first to get going.

we have a heavy presence of grackles here in Eastern Ontario now. They seem to be at their height from late August until the first frost. Then there are none. They are mostly a very tame bird, relative to jays and such. Annoyingly greedy at our feeders.
You have a bit more red than we do here. But more is coming.

I am very glad that your hip is feeling better.
I do hope the rowan is not telling the truth about the winter to come.
Thank you (again) for taking us on one of your outings.

The read leaves are so pretty. You definitely have a lot more fall color than we do right now. That sounds really neat with the birds. And how cool that you accidentally got your daughter in the picture.

Wonderful that you are able to be back riding, and at such a lovely time of year.

great captures of the view from your bike. i know it must feel great to be riding again...i miss mine but do hope to ride again soon!!

be careful my friend!!

Looks chilly but inviting. Glad you are on the mend.

Fall hasn't really got under way here. Nuts and berries, many wildflowers, but no frost yet to change the foliage colors.

Funny, Dogberry is a comic character in Shakespeare. I wonder if rowans were known as dogberry then in England?

It makes sense that the term dogberry was brought to Newfoundland by our English ancestors. Whether the term referred to the same berries in England as they do in Newfoundland I haven’t been able to determine.

You have captured the beauty of fall iso perfectly.

'Rusty colours' is such a good way to describe the season.

So many beautiful trees.

The birds I can see are Grackles. Brewer’s Blackbirds occur here accidentally only.Rusty Grackles breed here but I don’t see them on the ground photos. They may have been in the trees and flew ahead of us.

I known it as mountain ash.
Coffee is on and stay safe

Good to read that you are back on your bike after a bit of an injury. The grackle experience would be both awesome and a bit scary. Birds are such amazing creatures. Love the red maples. Not much colour out this way.

These all bring memories of my late September visit in 2019. For somone who lives in the tropics the colours animals, birds and temperature is just magical.

We too noticed the prolific berry crop on the Rowans, no doubt as a result of favourable growing conditions and not an indicator of their ability to predict future weather. Large flocks of grackles, or any birds for that matter, are spectacular.

I am sure that it was good to hit the trail again, and the topper was the grackles.

All those birds is a wonder to see as a flock moving around like that. Glad your hip is feeling better. It is a fun seasonal Nature report to see how the foliage is turning along the Atlantic coast.

I bet you are glad to be out on the trail once again. I would want to get out all I could before winter arrives.

I bet it did give a strange feeling to be on a bike with all those grackles...

I envy you for being able to ride a bike. I haven’t been on one in decades, and I fear that it wouldn’t be pretty. I do ride a stationary bike, so I just have to wait for the leaves to change around me while I pedal in place. I enjoyed your beautiful photos.

The Red Maples are gorgeous. I wish our trees turned fall colors. I'm glad you are back on your bike. I'm still trying to win one in a contest. You never know.

Glad you are out biking and sharing your lovely region with us. Our colors are barely beginning here, but soon we will have those red maples burning our woods. The birds are very interesting. Thanks for visiting my blog, Marie.

That must have been an amazing experience, biking with the birds. Nature can be so much fun! :)

Hello, Marie
I am glad you are feeling better and going out for your rides again.
Beautiful scenery and wildflowers, the Rowan tree are pretty. I like the colorful berries. Pretty photo of the horse. Neat shot of the trail, black birds and your daughter. Take care, have a great day!

Those mountain ash trees look magnificent with all those glorious red betties. Thanks for the blog shout out too.

heartfelt congratulations for being back on bikes dear Marie !

gorgeous views as always ,it is hard to remove eyes from the such lush scenery :)

i read about your experiencing birds in trail wow sounds breathtaking !

they were tired enough to be brave and stay still or may be being in flock makes them act bravely :)