A walk on the beach

It feels wild and untamed, this beach on the northeast coast of Prince Edward Island. Savage Harbour lives up to its name on this day after a storm. The wind is high enough today to keep the sea agitated, roaring into our senses as we walk the beach, only the gulls and a few small shorebirds to keep us company. 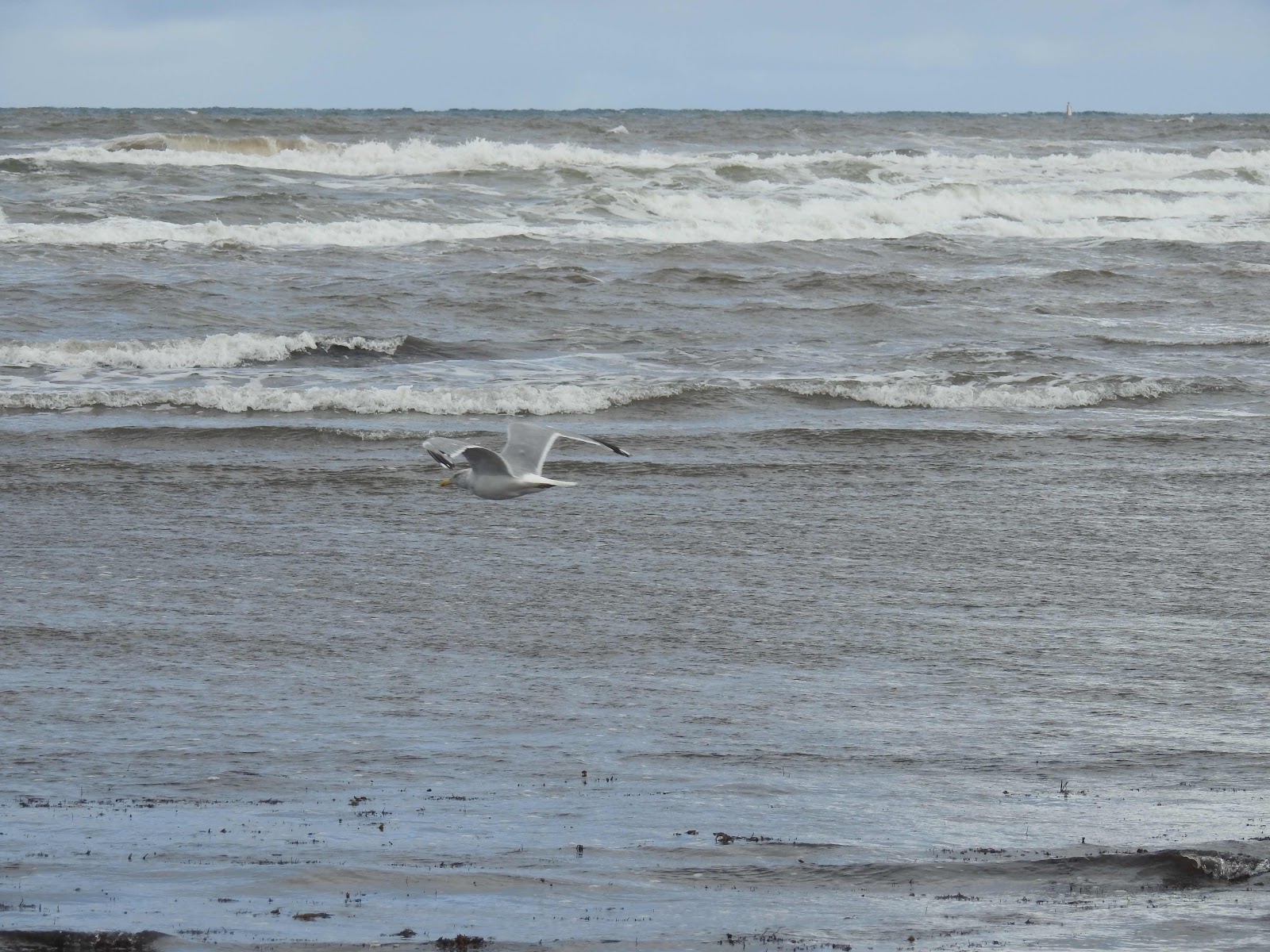 The waves break a bit off-shore on the sand bars that constantly shift position around this Prince Edward Island, making navigation of fishing boats a constant challenge around the ever-changing shoreline.

The sky is a character in this performance as well. Sometimes she teases us with blue, as if she will don her best costume any minute. 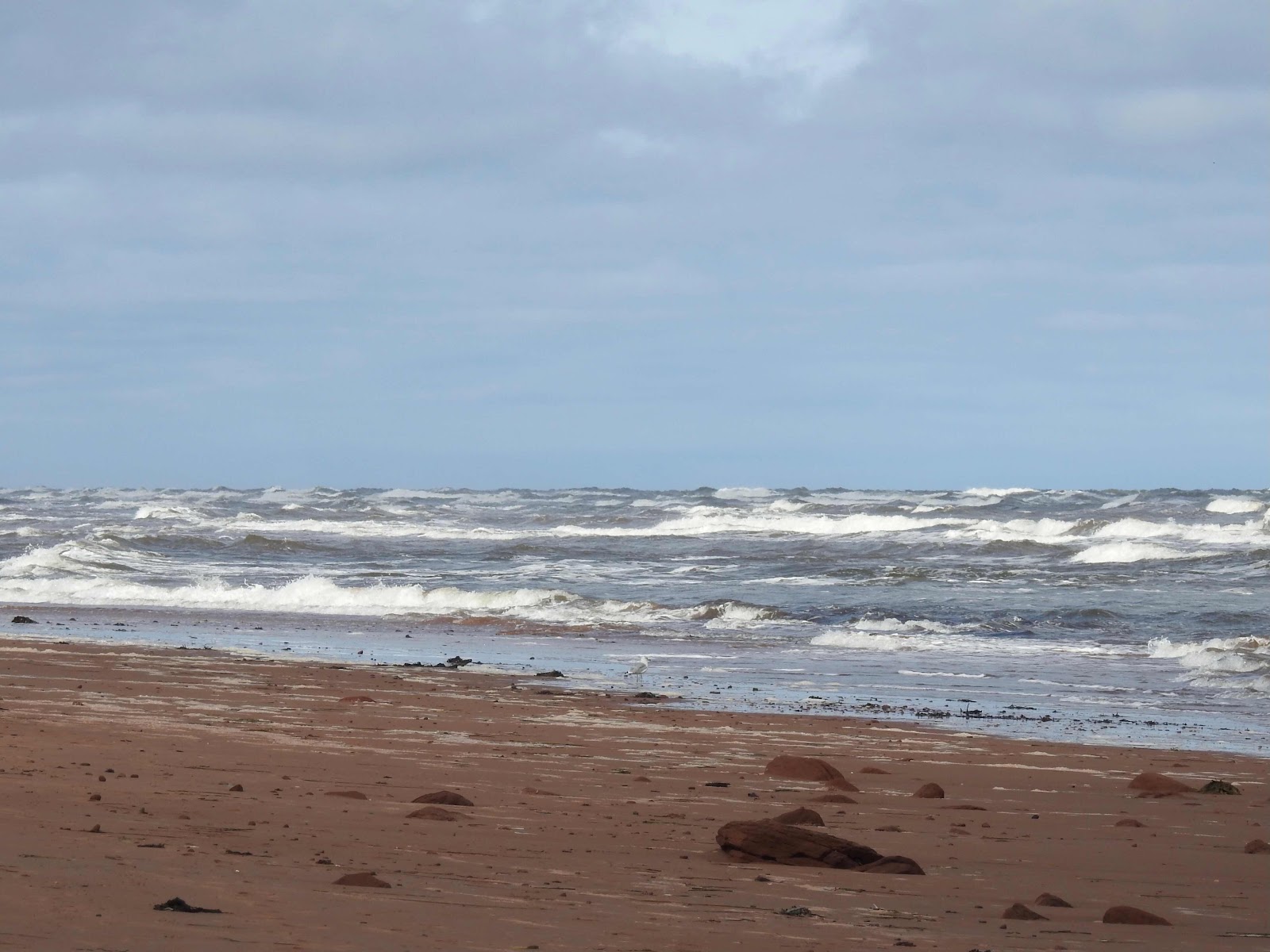 Other times, she presents a hint of blue through thick white pillows. 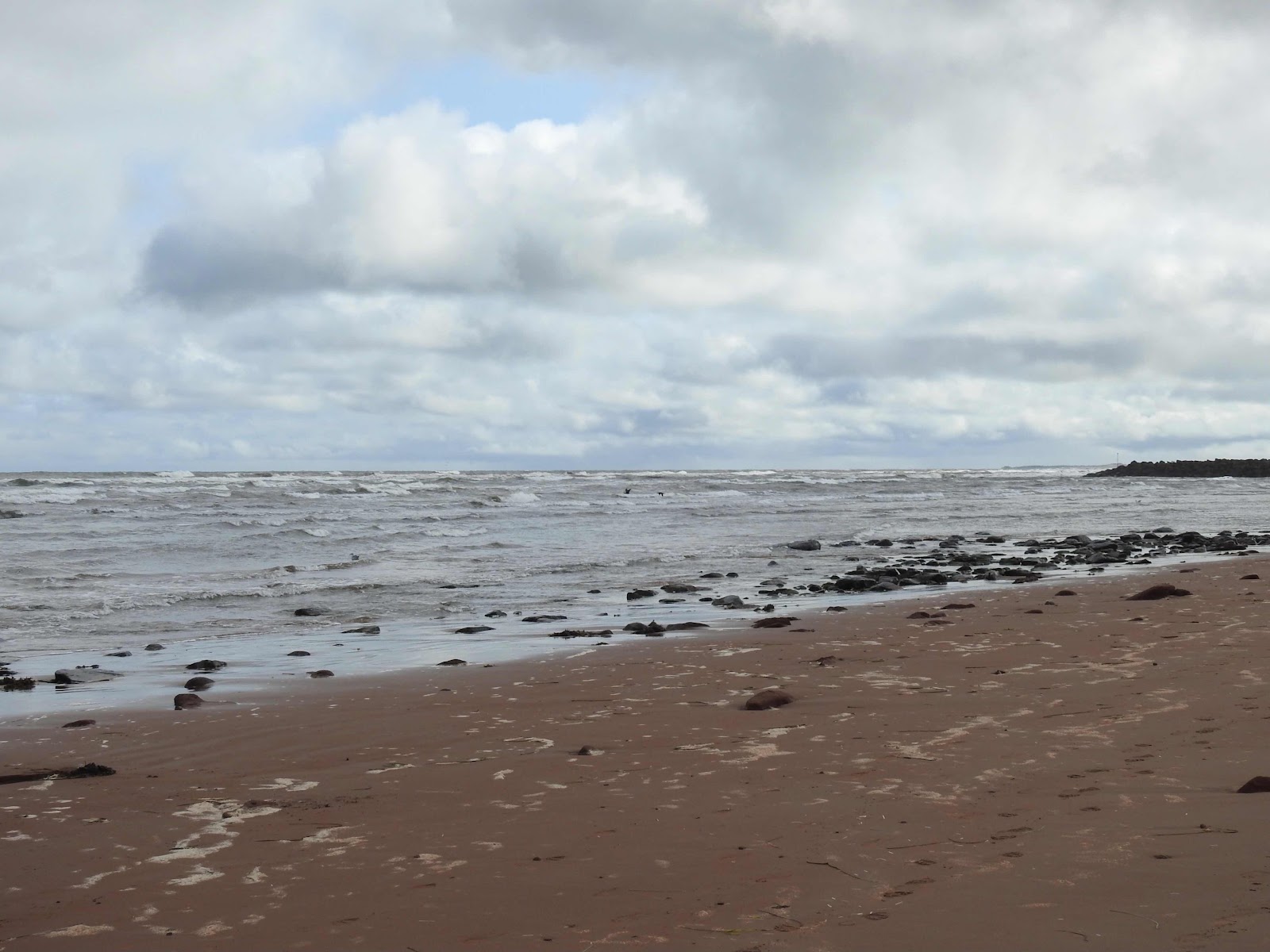 This character affects how the sea looks as well, and its blue is particularly appealing. 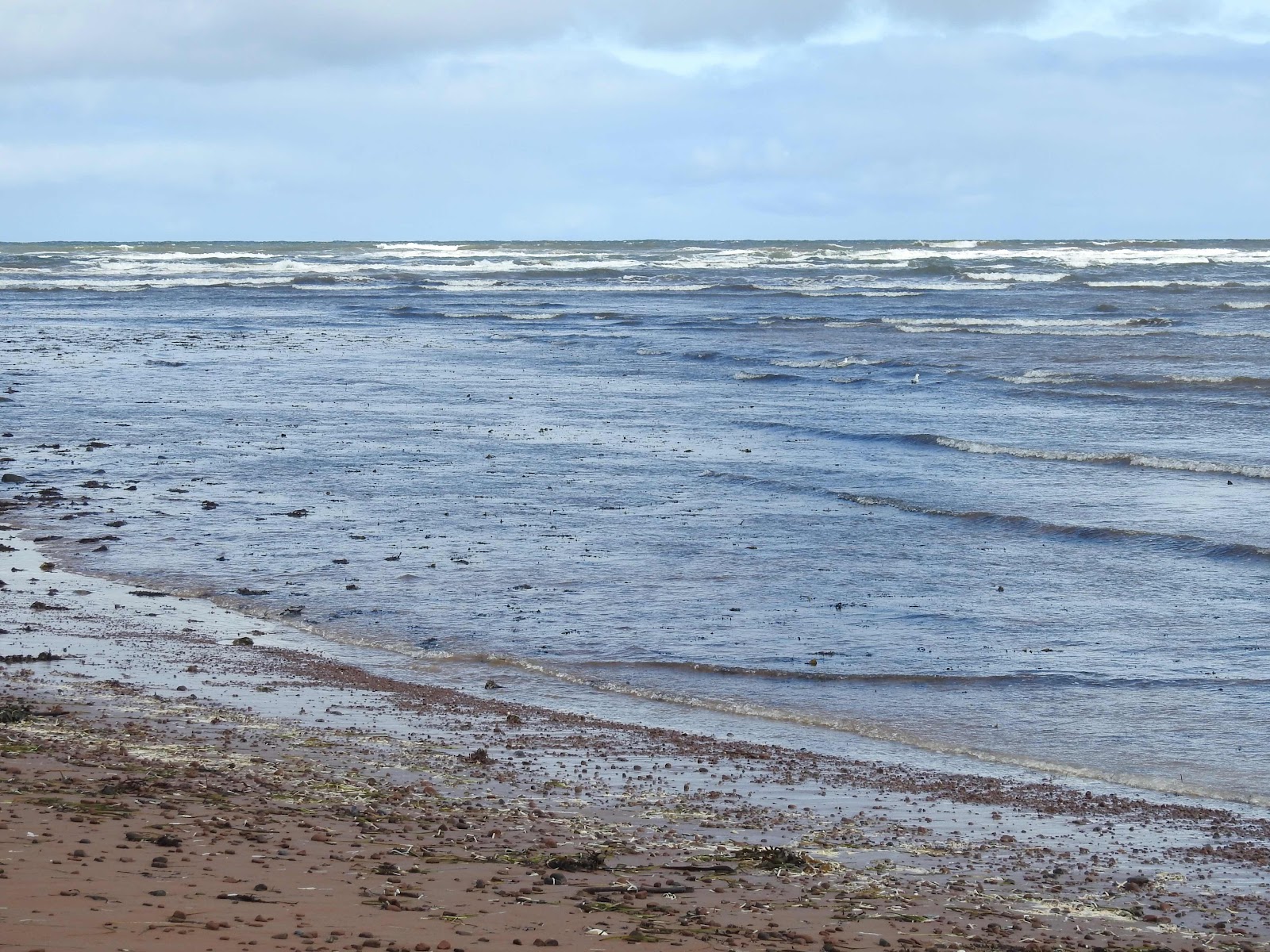 Just beyond the nearby inlet to the wharf, the sea looks particularly rough today sending mist onto the beach. 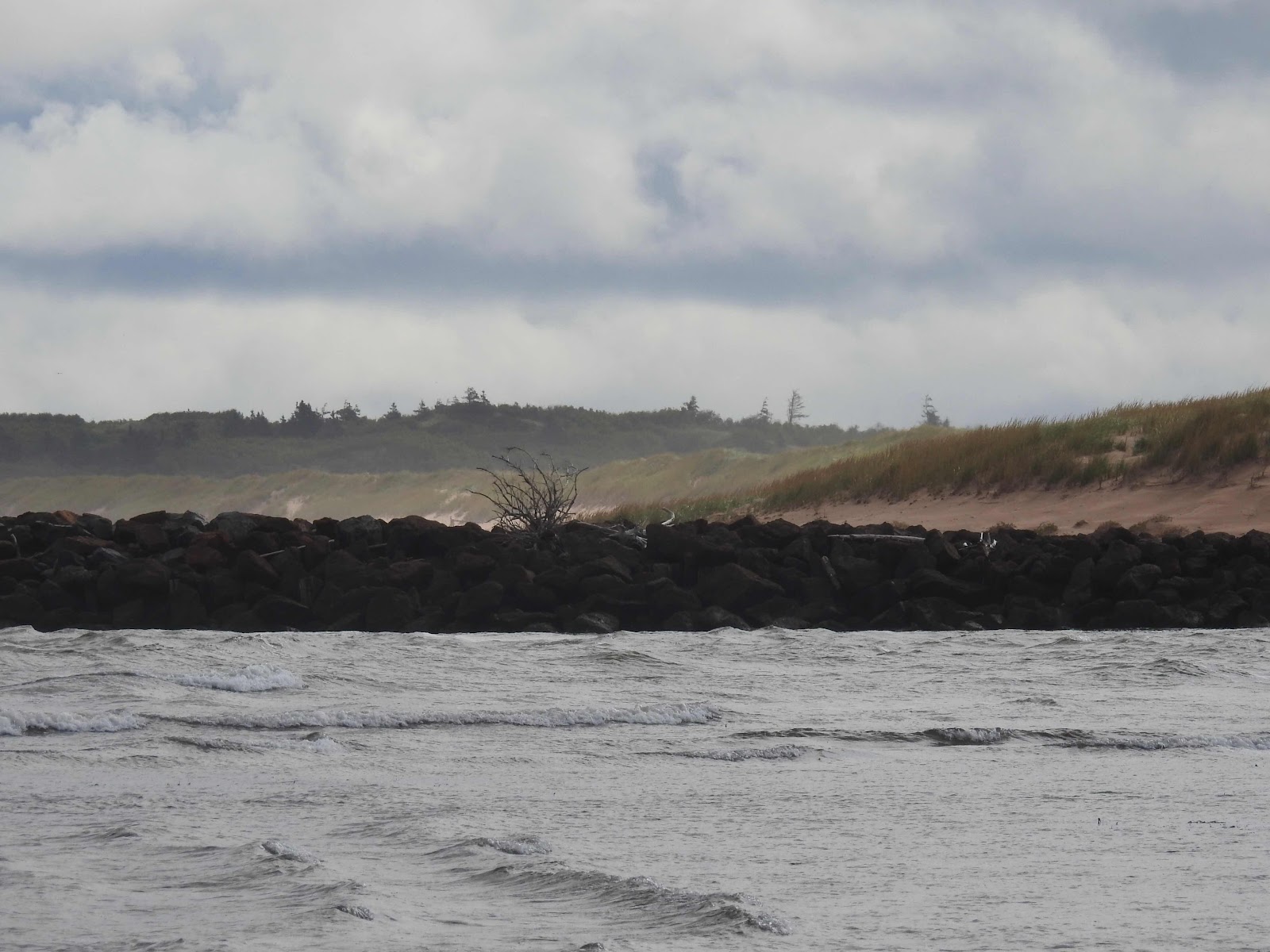 The gulls are in their element. Gliding on the breeze or foraging on the beach, they ignore the roving audience which stops to admire them on occasion. 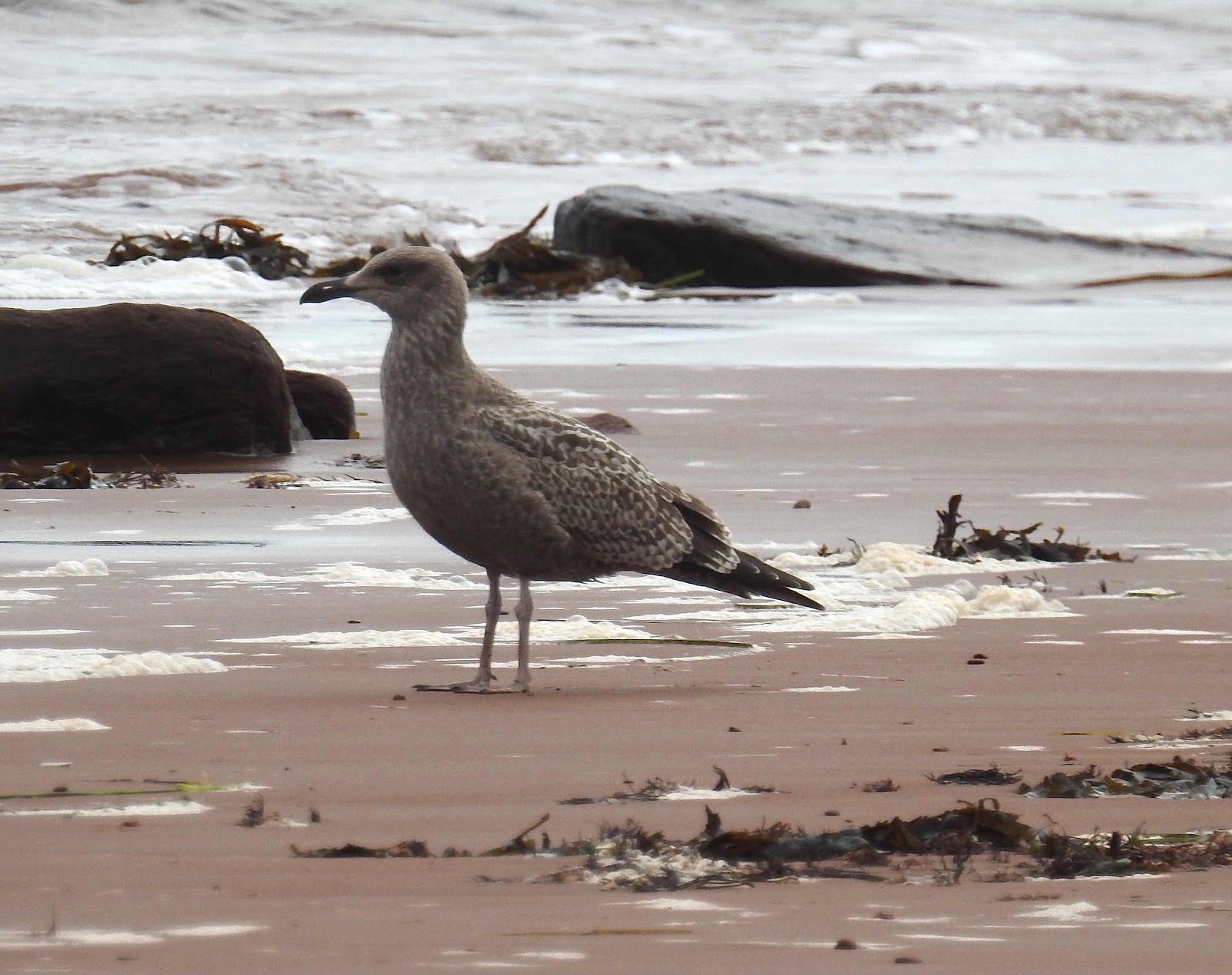 The young Herring Gull showed its marking as it floated on the breeze. 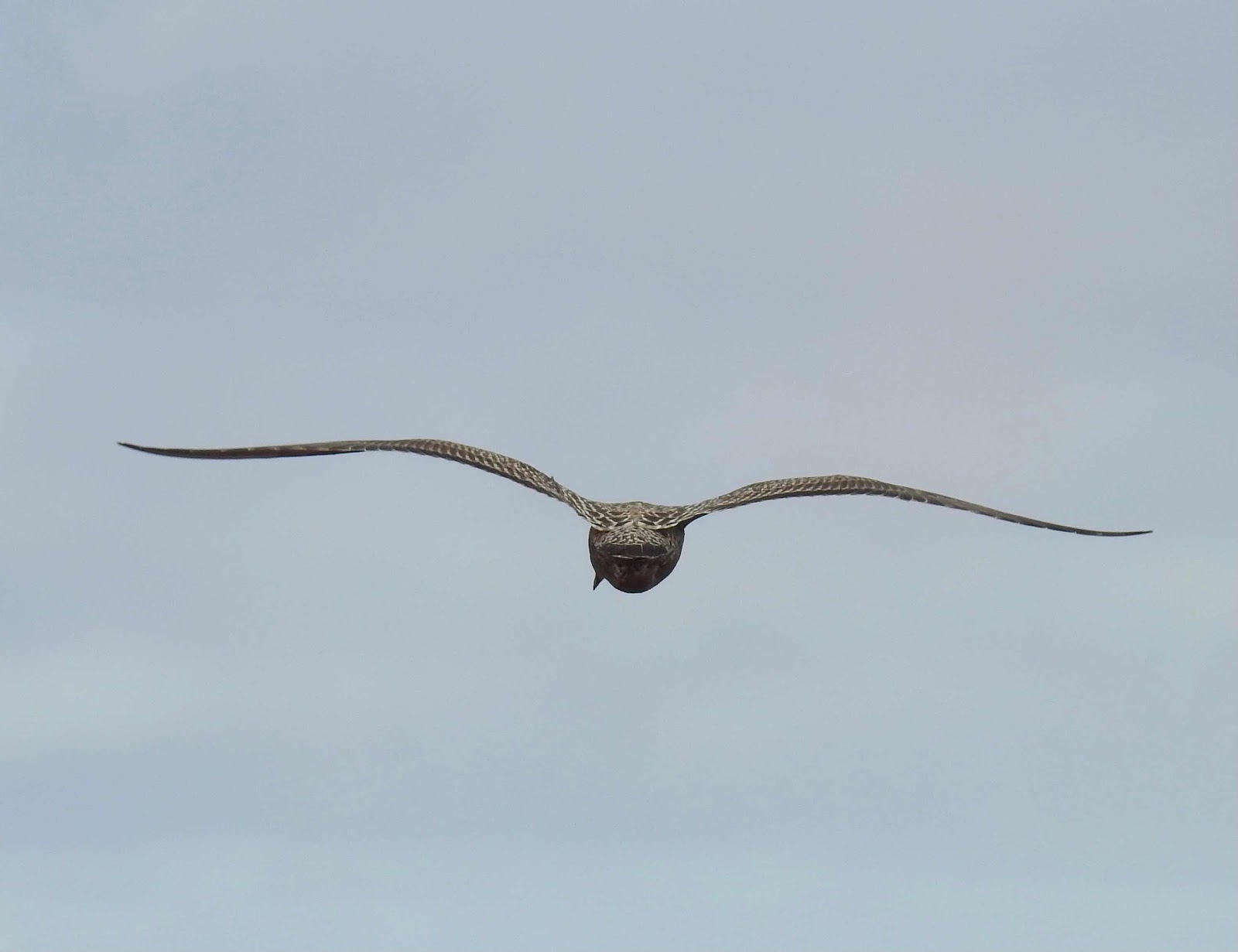 Another had its mouth full as it prepared to drop a shell, breaking it on the beach below. Such clever birds! 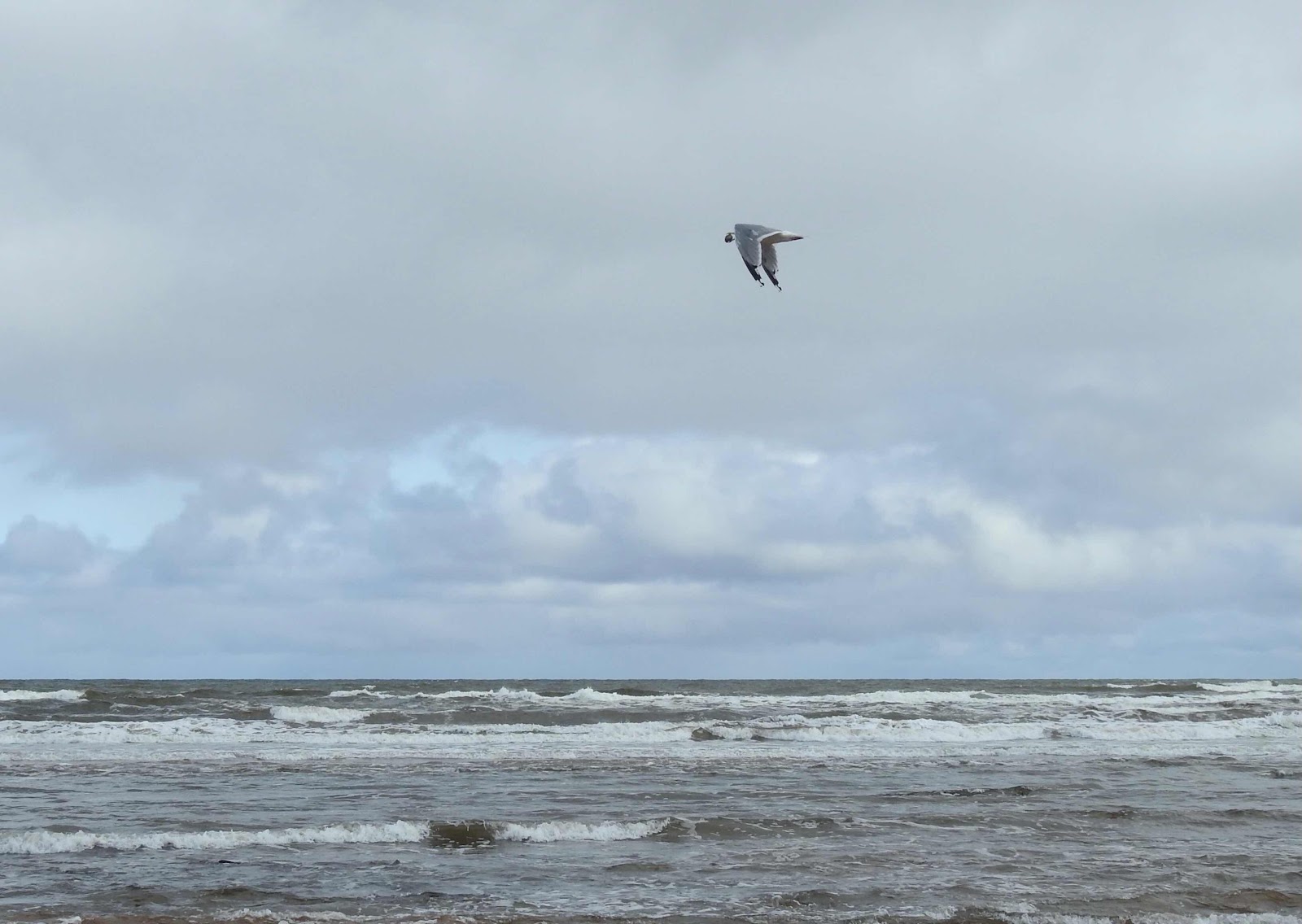 Meanwhile, the small shorebirds go about their foraging along the water’s edge, oblivious to the gulls. 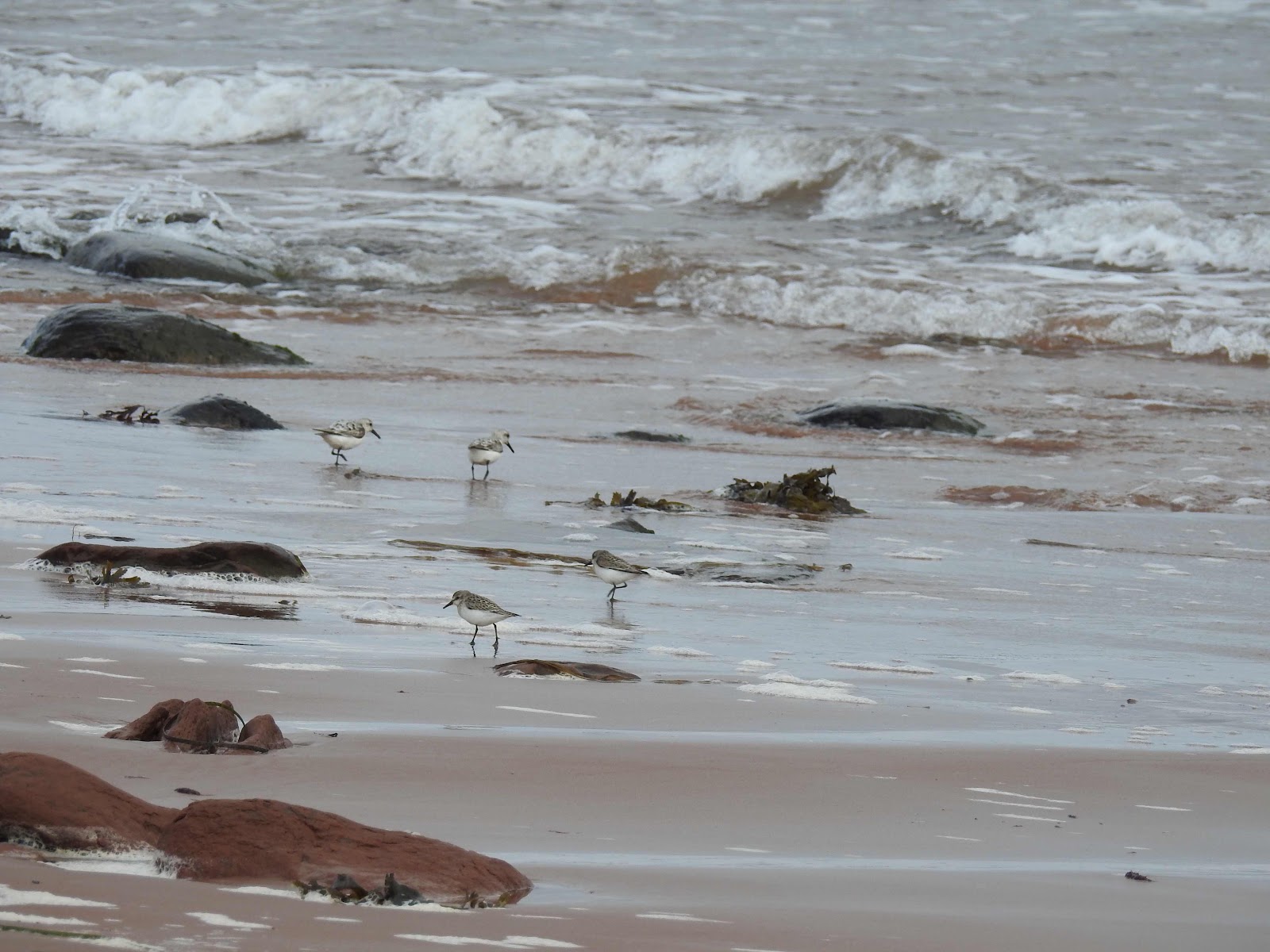 Sanderlings and Semi-palmated Plovers don’t mind the audience either, though they run along the shoreline as we advance up the beach. 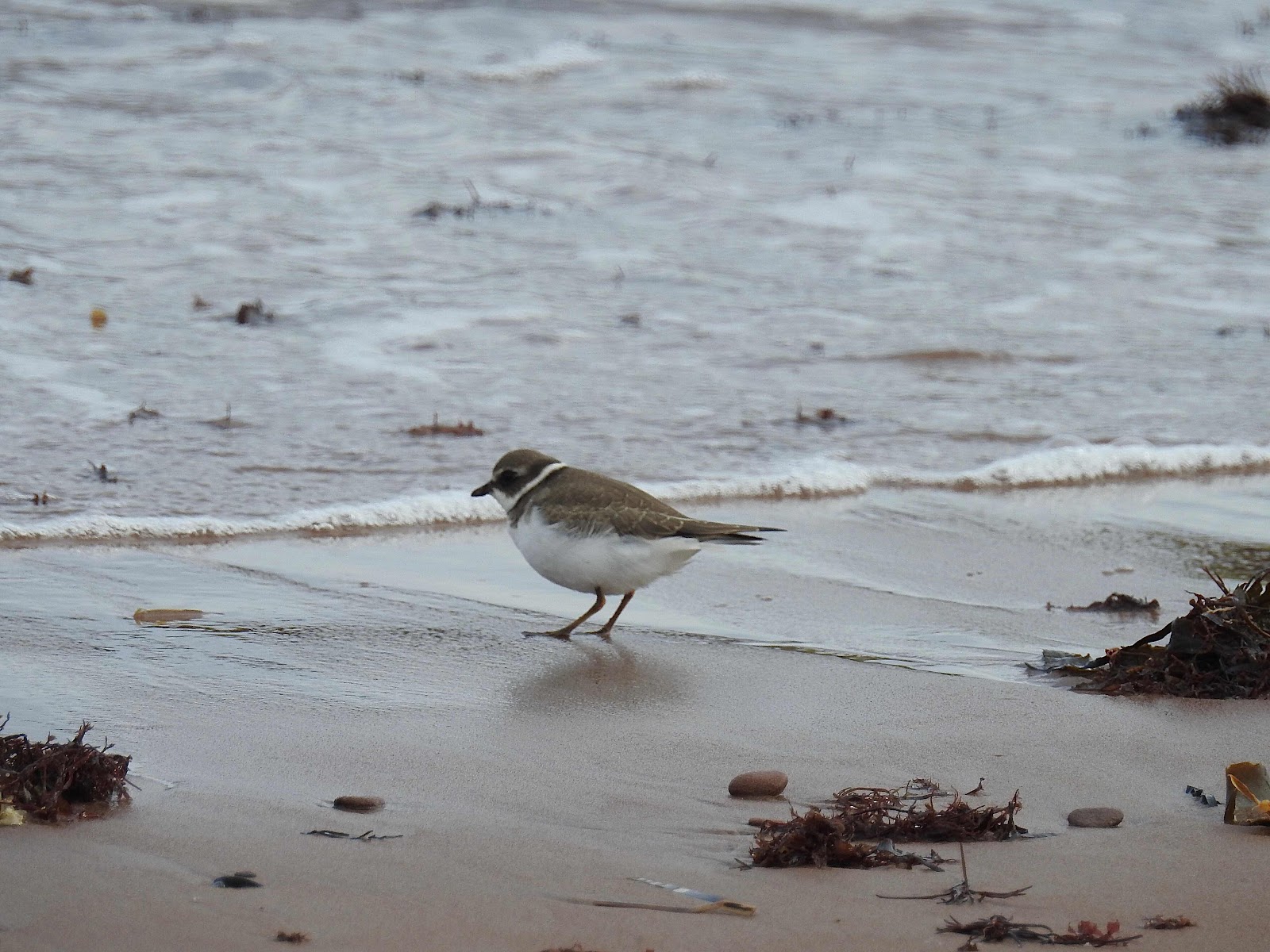 They do a lot of running though they can fly.

Along the beach, Bladderwrack, also known as Fucus has latched on to a rock via its holdfast. 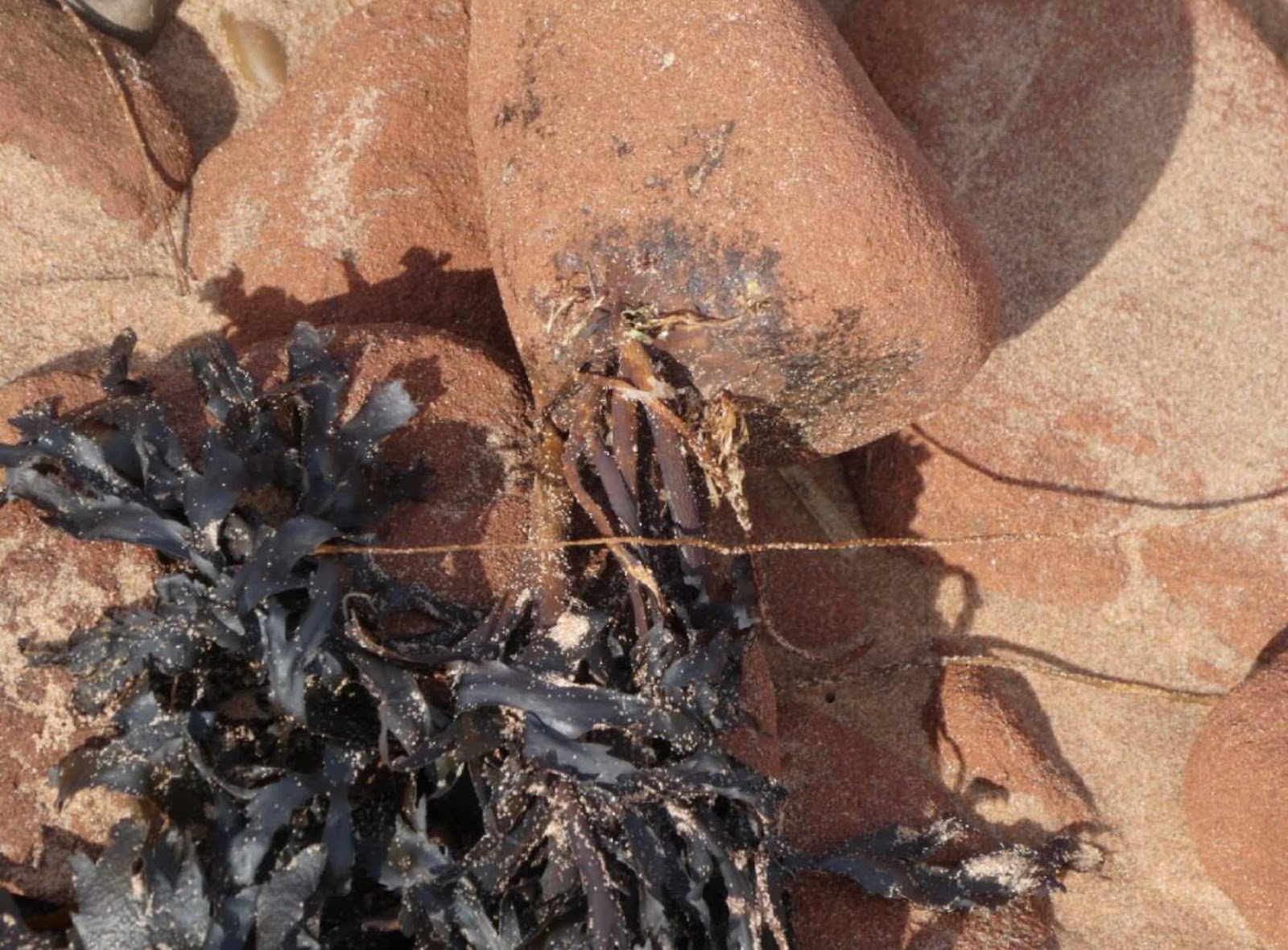 Further along, a piece of driftwood has been home to shipworms and Gribbles, leaving their impressions in the wood. 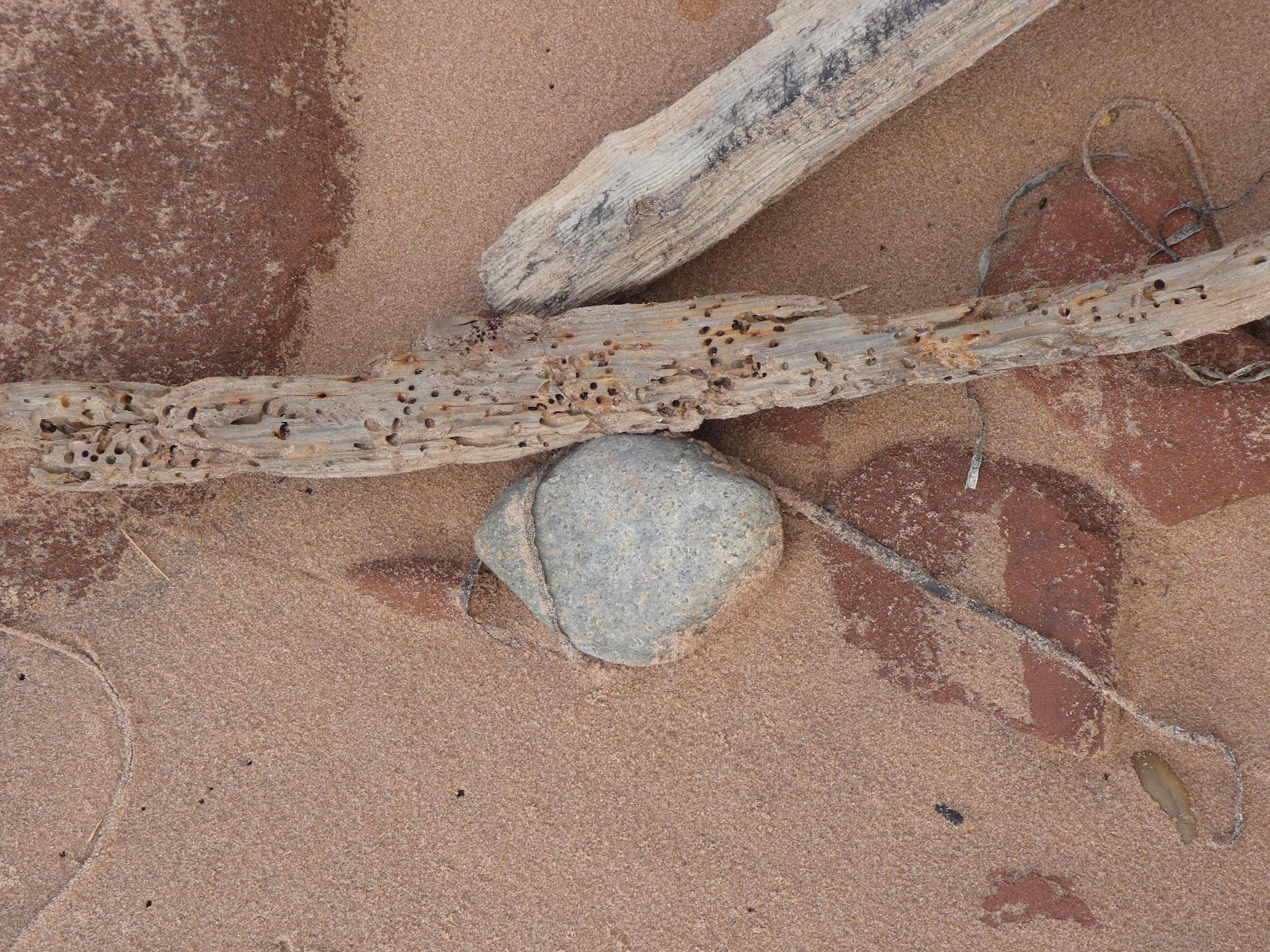 There is much to take in as we watch and listen.

This theatre is one which will draw us back every year for a repeat performance.

From your photos, I can feel the wind, smell the surf and hear the seagulls!

You can find some really neat and cool things on the beach. Nice shots.

A very beautiful and yet intimidating ocean...
Lovely pictures.

The beat of the ocean keeps changing day by day. Great photos!

How absolutely delightful. Thank you so much for taking us with you.

We've both been enjoying days by the sea! I thought about your blog yesterday when photographing one of the few lighthouses around my stretch of coastline.

The waves do look rough.

I love seeing the delightful seascape, all the birds along with such amazing whitecaps. I felt like I was there with you. Thank you!

You convey your endless attachment to this region. It's lovely to read and see. Such photography.

"gribbles"? Had to look that one up.

There's always something different and interesting to find on the beach. Great photos and information about the beach.

This certainly is lovely to watch!

Splendid bird and wave photos. Especially love the gulls. I have been known to bribe them with bread so as to get the shots I want. Afraid they may decide to form a union to request higher wages. Thrown higher, that is. The grandgirl was a great catapult a few years ago.

I know people who live coast and one there things they like to do is beach comb or see what washes up.
Coffee is on and stay safe

Wonderful pictures, the beach, the sea and the associated birds and waves are always beautiful ... I immediately think of my vacation. I have just come back from the sunny island of Sweden.
I wish you a nice weekend.
Thanks for the photos.

Beautiful photos from your beach walk. I love the views of the water and waves, the gulls and the driftwood. Have a happy weekend!

Sanderling and Semipalmated Plovers have been constants throughout our journey through Atlantic Canada. Today we will start the long journey home.

I certainly understand why it draws you back! I can almost hear the waves...and the gulls.

Thanks to your descriptions and photos I can almost smell the air and feel the need for a light jacket. Wish I were there.

Just lovely. I do like seeing the white horses so far out to sea.

That gray tone would be a perfect setting for an Agatha Christie movie. Hahaha. Right spooky.

Moving blog theater. The first photo on the upper left, there looks like a bit of sandy color for the sandbars you wrote about. Rough seas, rough navigation.

Your beach sounds so much like our coastal beaches here :)
Beachcombing is so much fun - always something new to be found, especially if the ocean is a bit stormy. The energy of turbulent waves is an incredible thing to watch, but it never seems to worry the bird life that much.
Enjoy your day :) xx

Lovely pictures and a lovely beach...
Have a great sunday!
Titti

You have a beautiful place to walk, so different to the beauty we see here.

Your pictures are awesome and I love your descriptions - so beautiful

How beautiful all of your photos of the waves, sand , and birds are! It makes me miss the times when our children were small and we would travel to the beach every year!

your flight pictures are wonderful, isn't it fun to watch those sanderlings and plovers run around??

thank you for sharing the performance of nature with us ,this is deep pleasure !