Picking berries has always been one of my favourite activities. Maybe it was the association with the delicious baked treats which always followed or the jam/jelly which brought a taste of summer into the long months of winter, but picking berries never felt like work. 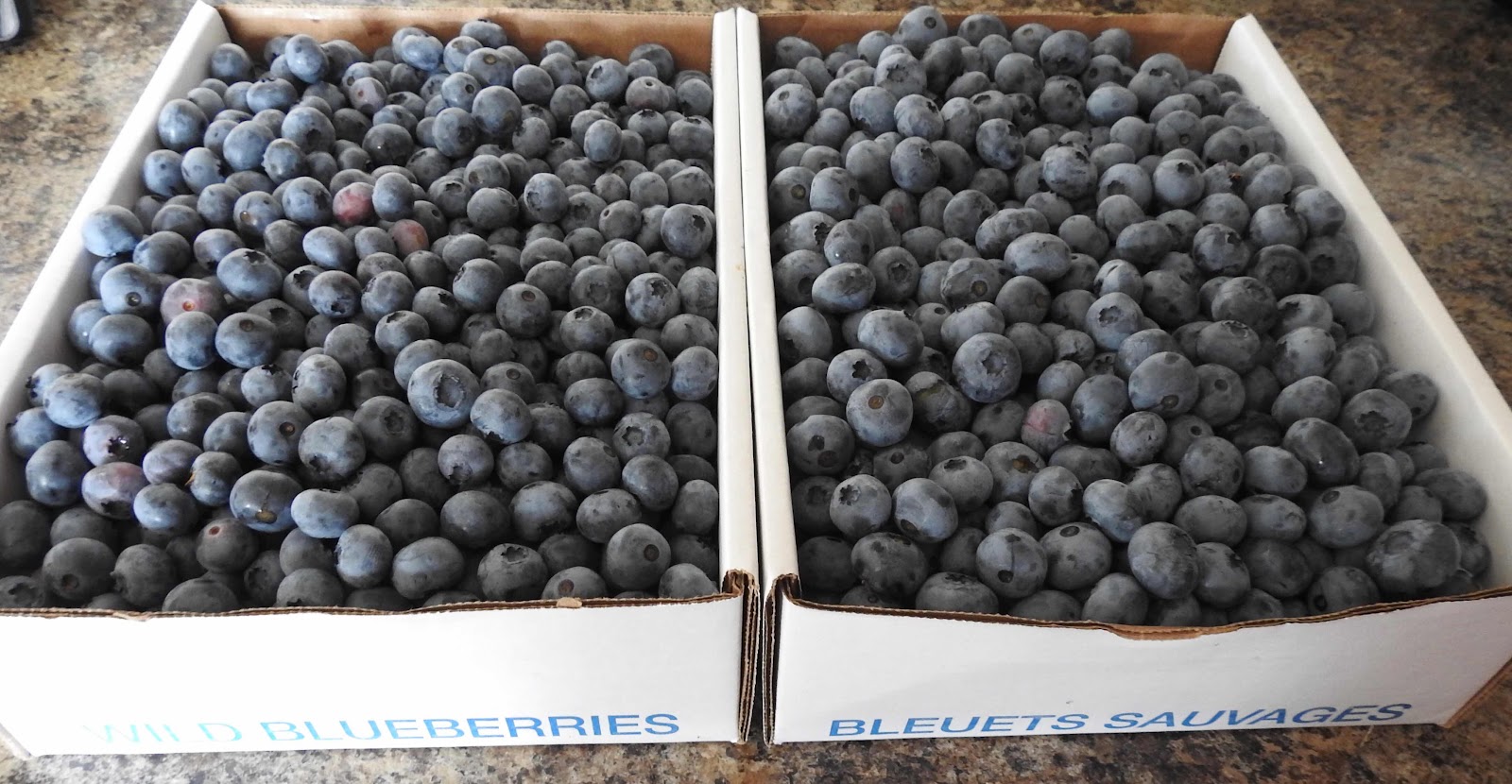 I started young. I remember picking cranberries with my grandmother when we visited my grandparents every Sunday. Nan made jam of course and eventually, when she had a deep freeze, she stored some there. I always picked berries with my Aunt Esther too. We went down the shore and picked along the shoreline above the cliffs for cranberries as well. I wasn’t in school when I went with Nan, older when I accompanied Esther.

Cranberries were the start of the berry picking adventures though. Over the years, with various people, I picked a variety of berries which were plentiful in Newfoundland. Those berries came from the wild, not cultivated in a well groomed field.

There were raspberries which always seemed to have wasp nests nestled among the bushes. If you came from raspberry picking without scratches, bristles in your hands or a sting, you counted yourself lucky.

Blueberries were easy to pick. You could sit among the bushes, find a spot with biggies and pick a bucketful.

We picked wild strawberries too. It was work to find patches of the berries, miniature compared to what is cultivated today. They were sweet and tasty though and worth the effort though we didn’t get many.

A small patch of blackberries in my grandparents yard was just enough for a small snack. We never saw enough of them for picking other than snacking.

Partridgeberries known as lingonberries in Scandinavia, were among the ground cover on hillsides. The tiny plants meant you moved around to pick them. They were close to the ground and didn’t ripen until September after school started. The berries are tart and apples go well with them in pies especially.

Crowberries were similarly located but along a coastline where they required back breaking work. I picked these with our neighbours, the Ralphs, who had picked them in their previous home, Flat Island, a rocky, isolated fishing village in Bonavista Bay. The crowberries went into puddings and were enjoyed throughout the winter. You can imagine in such an isolated place, nothing, not even a crowberry was wasted. My parents didn’t pick them growing up in St. John’s and surrounding area.

Then there were the berries picked from trees, such as squash berries with their flat stones which you strained out to make jelly. It was one of my favourites though I also enjoyed pin cherry jelly too.

The apex of berry picking was the bakeapple however. In Scandinavia, it is called cloudberry. It grows on bogs, requiring rubber boots as you scour the bog for the berries, which grow on small individual plants spread over and close to the bog, each plant with one berry. It is backbreaking work, requiring trekking over a bog and through bog holes. I picked them once which was enough for me. If you can pick a gallon of those berries, you are an expert berry picker. They understandably are expensive to buy.

Fast forward to this past week in Tryon, Prince Edward Island. We picked cultivated high bush blueberries in a farmer’s field. 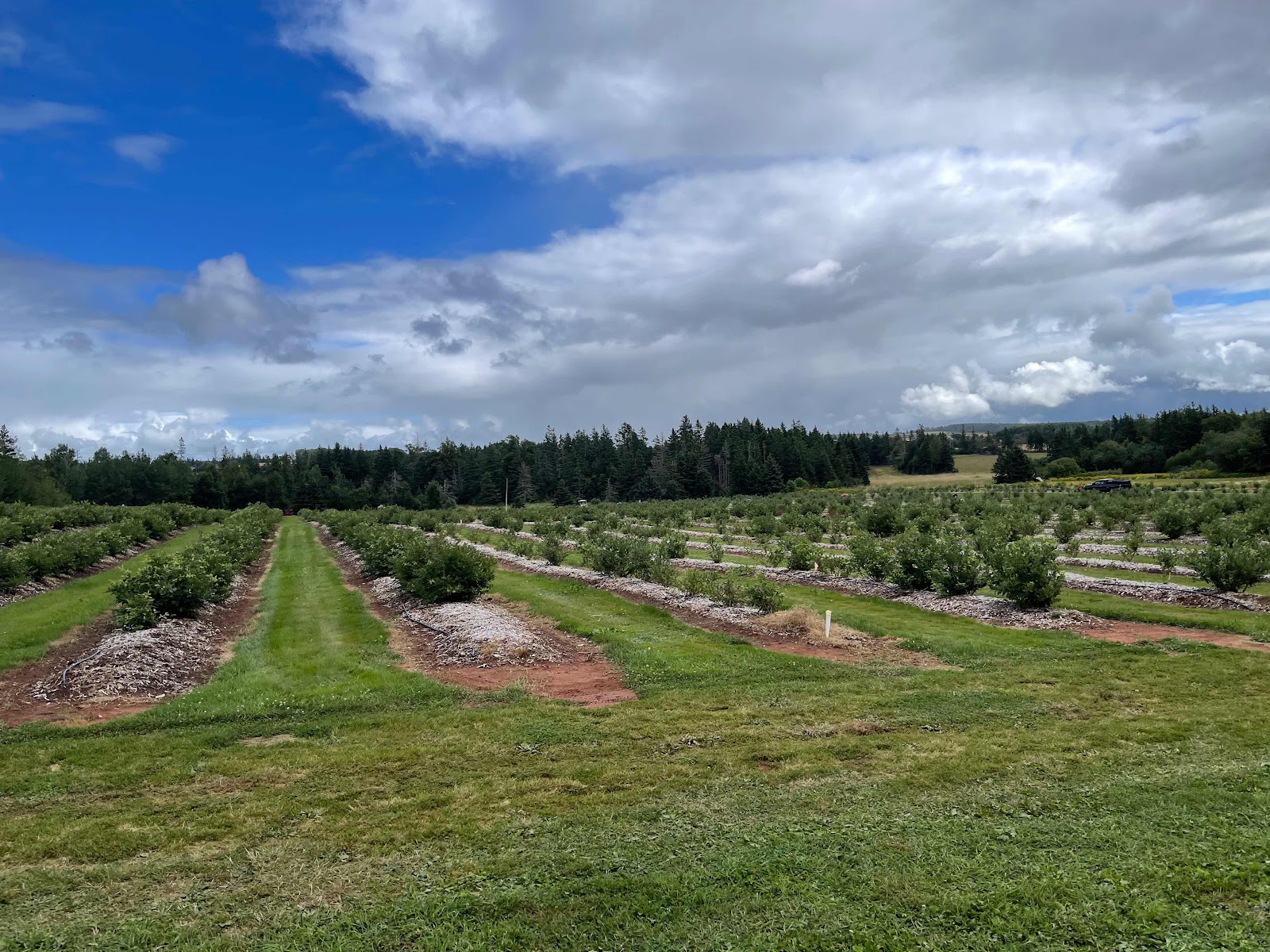 The plants are spaced apart 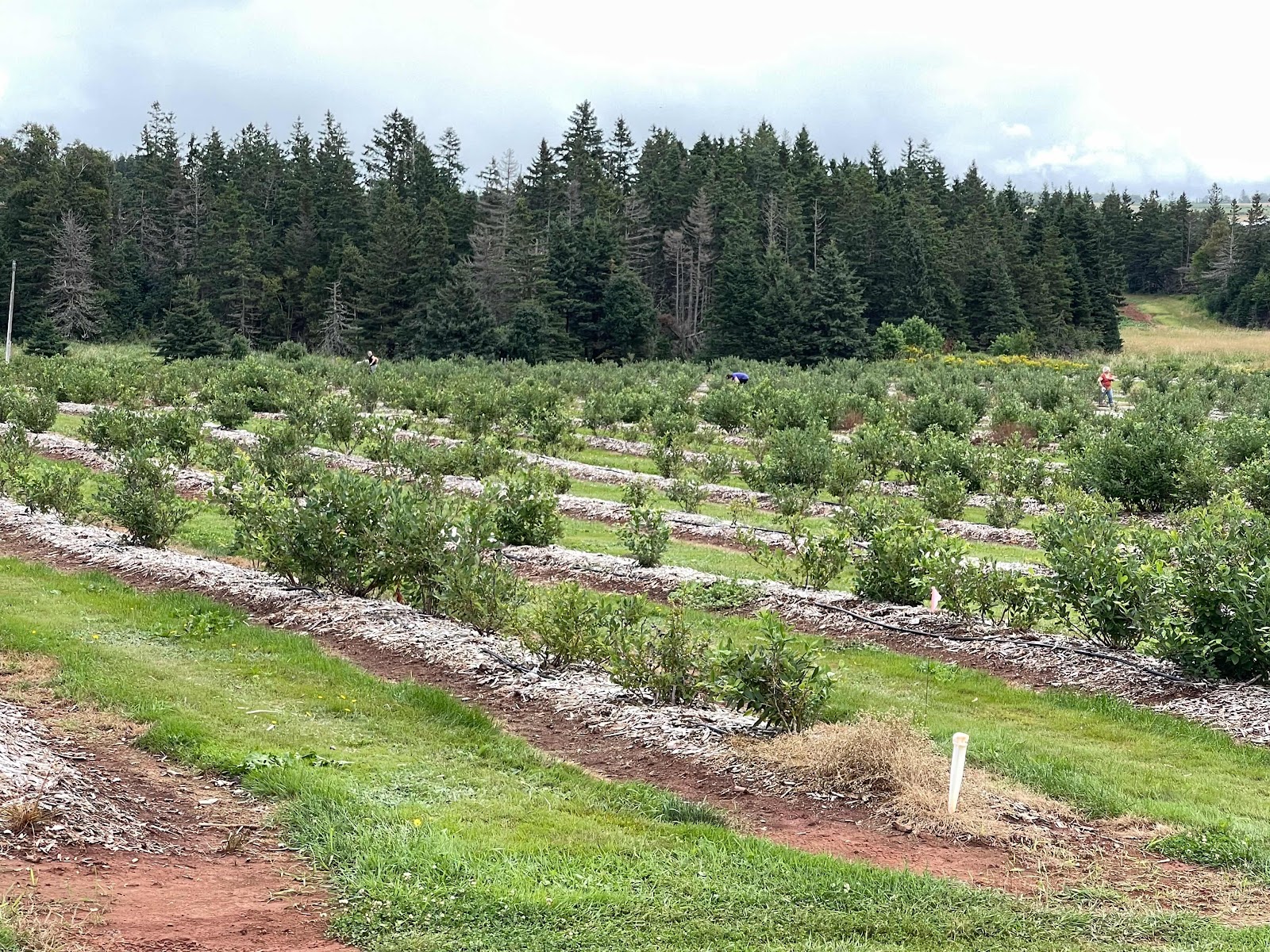 and you could put the box provided for picking under the bush to catch berries which might fall as you picked. 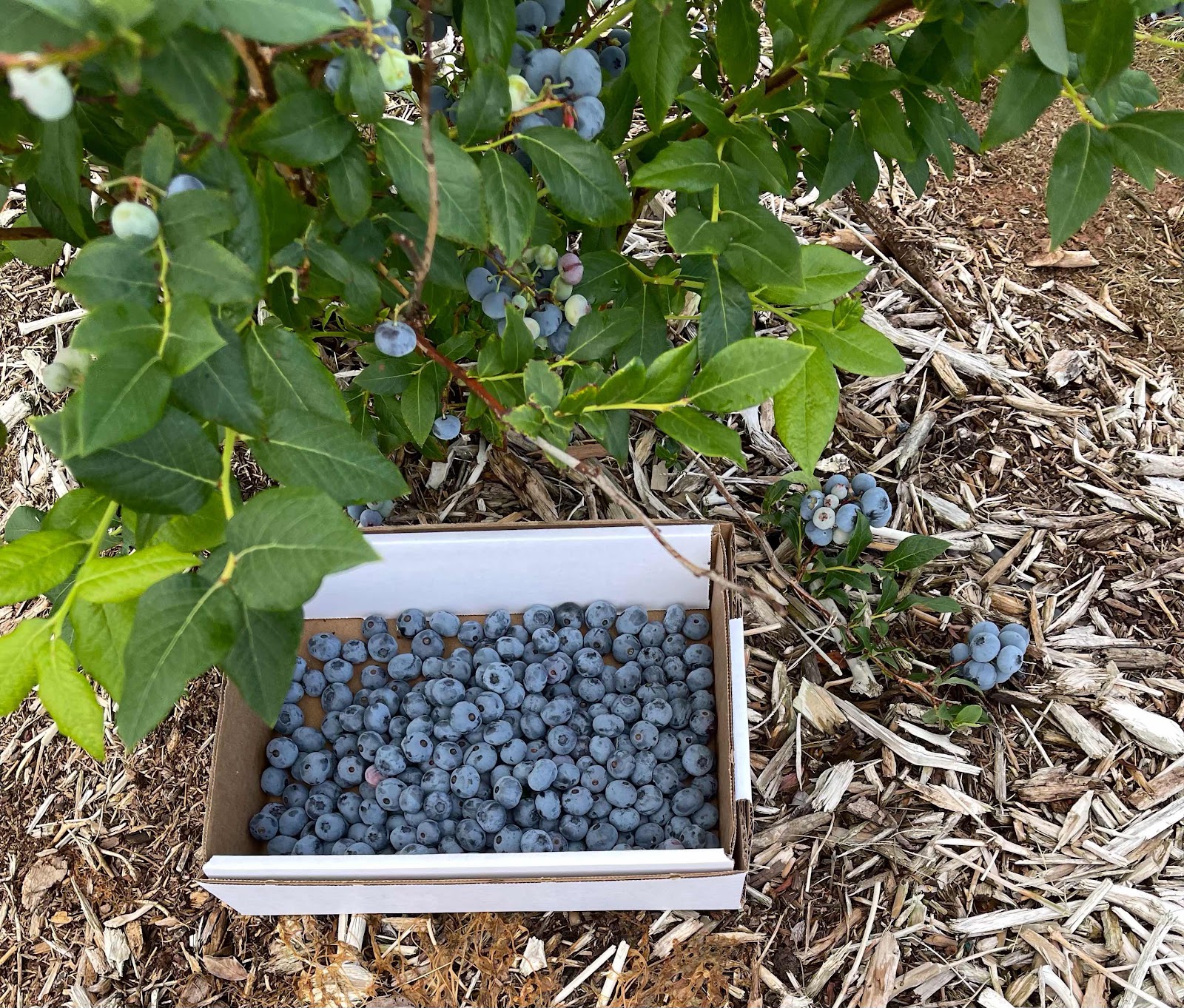 My husband and I picked quickly, filling the two boxes with the huge berries which taste like candy. 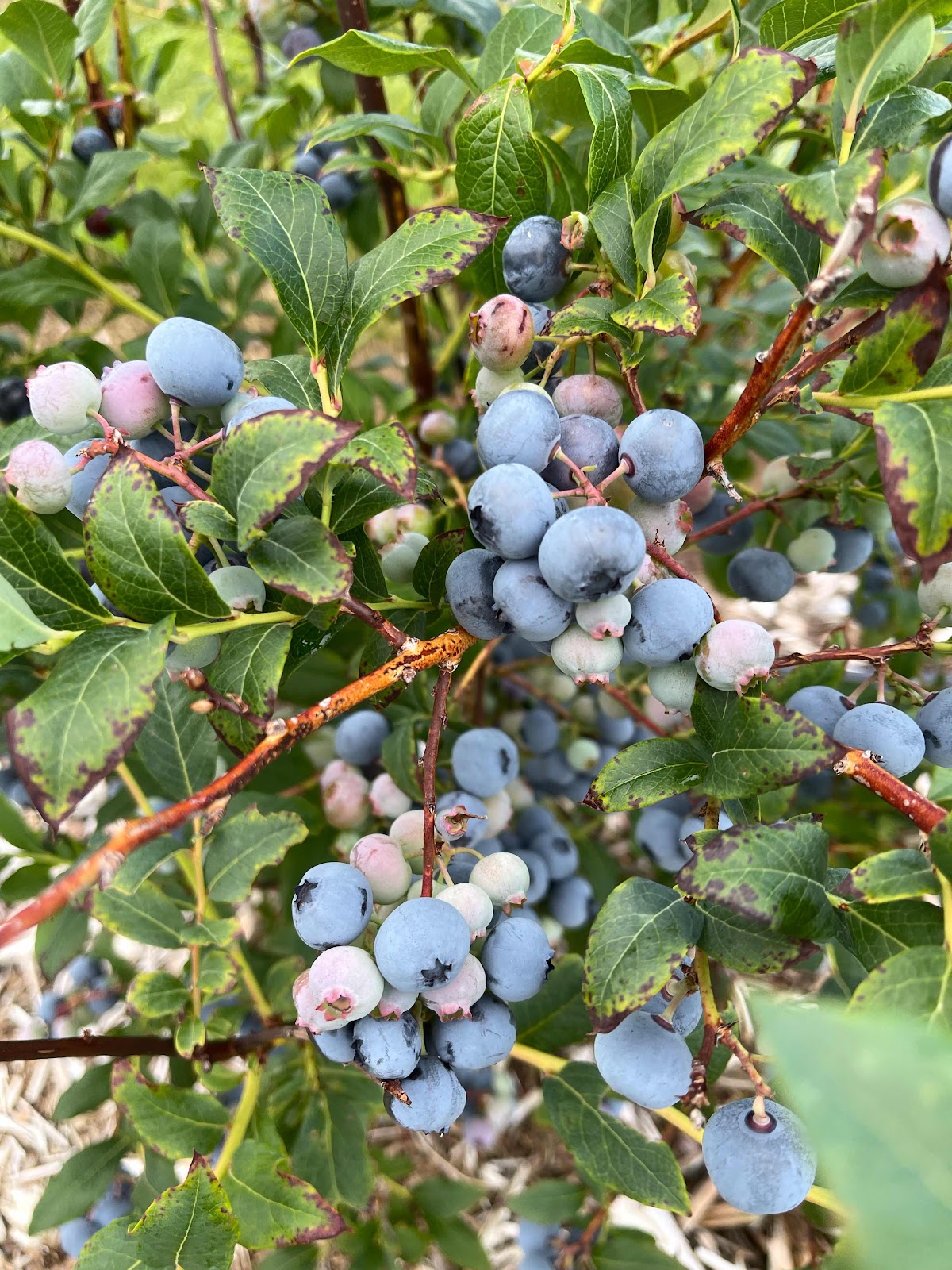 I froze some and we are eating some with yogurt for breakfast. After a lifetime of picking wild berries, this latest experience stirs up memories of simpler times when berry picking was a part of food gathering and August was the start of picking for another year.

I never heard of most of these berries, but blueberries and blackberries are abundant right now, and I've picked them as well as bought them. Yum! Love your pictures.

On the prairies when I was a kid, we picked chokecherries and saskatoons. Good times.

Blueberry pie. Yum. Although I like a good apple pie best, blueberry pies are more consistently excellent in my opinion.

You have quite a history and find memories there. I only picked strawberries once , as an adult, and I was not impressed. 😀

It is very interesting to hear of your experiences picking berries, Marie. I am sure that many of us have picked berries throughout our lives, especially as youngsters, but I doubt that we have had the grand adventure that you have had. There is nothing quite like that fresh taste is there?

Marie, I love this post. Yes, blueberries … one of my favorites. Isn’t it amazing what nature comes up with to feed us? 😊 In my most recent post I included a photo of the little stand in Seattle where a blueberry farmer sells berries grown on the farm down near Olympia, Washington. The blueberries are sold in boxes exactly like we see in your first photo. And, indeed, it’s like eating candy. Actually, the farmer here does welcome folks to come to the farm for self pick. I just haven’t done that as it is only a short drive to the blueberry stand. 😊 Thanks for all the info on the berry picking you’ve done. Very interesting post! Have a good week ahead! John

My mother would make jam out of blueberries, strawberries, and raspberries and put them in the freezer for the winter.

All those fresh berries sound and look so good.

Oh, Marie...you and I would have fun! Picking wild blackberries is my absolute favorite thing to do. It is sort of one among many truthfully. But oh how I loved to do that as a kid. We had two huge areas to pick them when I was a kid. A few scratches were nothing to me. Funny thing, I don't especially like them to eat as I pick. But I LOVE blackberry jelly and blackberry cobbler.

I had not heard of several of the berries you mentioned and had to look them up. I wish I could taste them.

I love picking anything, though...blackberries, apples, strawberries, blueberries, etc. I always think it is something deep within us wanting to preserve food for our families.

Well this just isn't fair!
My mouth is watering. I LOVE blueberries and these look divine.
I never heard of crowberries before but recognize the Lingonberries from my Scandinavian heritage. Yummy on pancakes or crepes.
Sue

ooooh yes...i LOVE blueberry crumble and blueberry pie!! i enjoy all berries but have not done much berry picking. i enjoy it, but often the heat excludes me from picking the berries i like to eat. we often go to farmers markets and we buy them there. those berries look very healthy!!

Most of the berries you mention are new to me. Blackberry picking is a part of my childhood though. We loved them - and always enjoyed the picking as well.

Blueberries look delicious. I haven't heard of many of those berries you have mentioned. You make me curious and I'm going to google for more information.

I'm not a berry picker but I like all the good stuff from berries. My friend Sydney always talked about bake apples from home but I never did figure out what they are.

How interesting to backtrack lingonberry to partridge berry and bakeapple to cloudberry. Both make good jelly and jam.

You lucky woman! Blueberries are one of my favorite fruits. I can eat them by the handfuls and I think they are probably the most versatile of all fruits in that they can be used in so many different ways. I enjoyed reading about all of the berries that you have picked. I remember when I was very young picking wild blackberries. They were always sweet, but had way too many seeds for my liking.

My goodness, Marie. I never knew there were so many DIFFERENT berries to pick! Strawberries, raspberries, blueberries...that's my repertoire, I'm afraid. Lucky you to have so many memories. Believe it or not, we eat blueberries with our muesli every morning, as long as we're able to get them, fresh or frozen. They're a pure delight for us!

How delightful to have all these memories of berry picking. And to have had access to all these berries. Not so me.

You have won derful memories!!!!!!

I never knew so many berries could grow in the wild! We have a few small native berries (mostly on trees, and hard to find) and introduced wild blackberries (which I enjoyed picking from in my younger days). Now, if you are wanting berries, they have to be gathered from a commercial enterprise or else bought in the supermarket.

Blueberries are my second favorite berry. I do eat a lot of them (though I only pick them at the grocery store), but Saskatoons will always be my favorite.
We picked pin cherries and chokecherries, blueberries and Saskatoons when I was young. I remember the wild strawberries too, though I don't recall where we picked them. Raspberries came from our own yard and when we didn't have enough, we went to the neighbour a mile away. She had close a mile of raspberry bushes!
We also had a plum tree in the backyard and there were always crabapples from someone as I don't believe we had trees.
Mom did all the hard work making jams and jellies, and canning fruit for the winter. The beauty of the jars lines up in the cellar is a memory I won't forget.
Thanks for this post - it really took me back.

so much fun picking your own berries. Reminds me of childhood picking blackberries with my sister then mum making jams and jellies.

Hello Marie,
I missed this post. The blueberries look delicious. I love them with my yogurt. It is a good idea to freeze some too. We have a couple of blueberry bushes in our yard, the birds eat more of them than we get to pick.
Have a great weekend.

Marie, how lucky you are to be able to enjoy the delicious blueberries! You can freeze them and use them like this for a delicious cake. To do this you must "sow" them like this, without thawing, so that the preparation does not stain you.
My greetings from Argentina at the other end of the planet.

I live in an area where blueberries and cranberries grow. ( we have raspberries and blackberries too). As a younger girl, we also went blueberry picking and I always enjoyed picking, eating, and making pies with them. Your post brings back wonderful memories. Thanks