Birds of a feather

We look forward to our morning walks on the boardwalk these days as the heat and humidity keep us close to home the rest of the day. My husband and I always start at the gazebo then we walk the short trail to the beach. We attempt to slip into the scenery so as not to disturb any birds there. 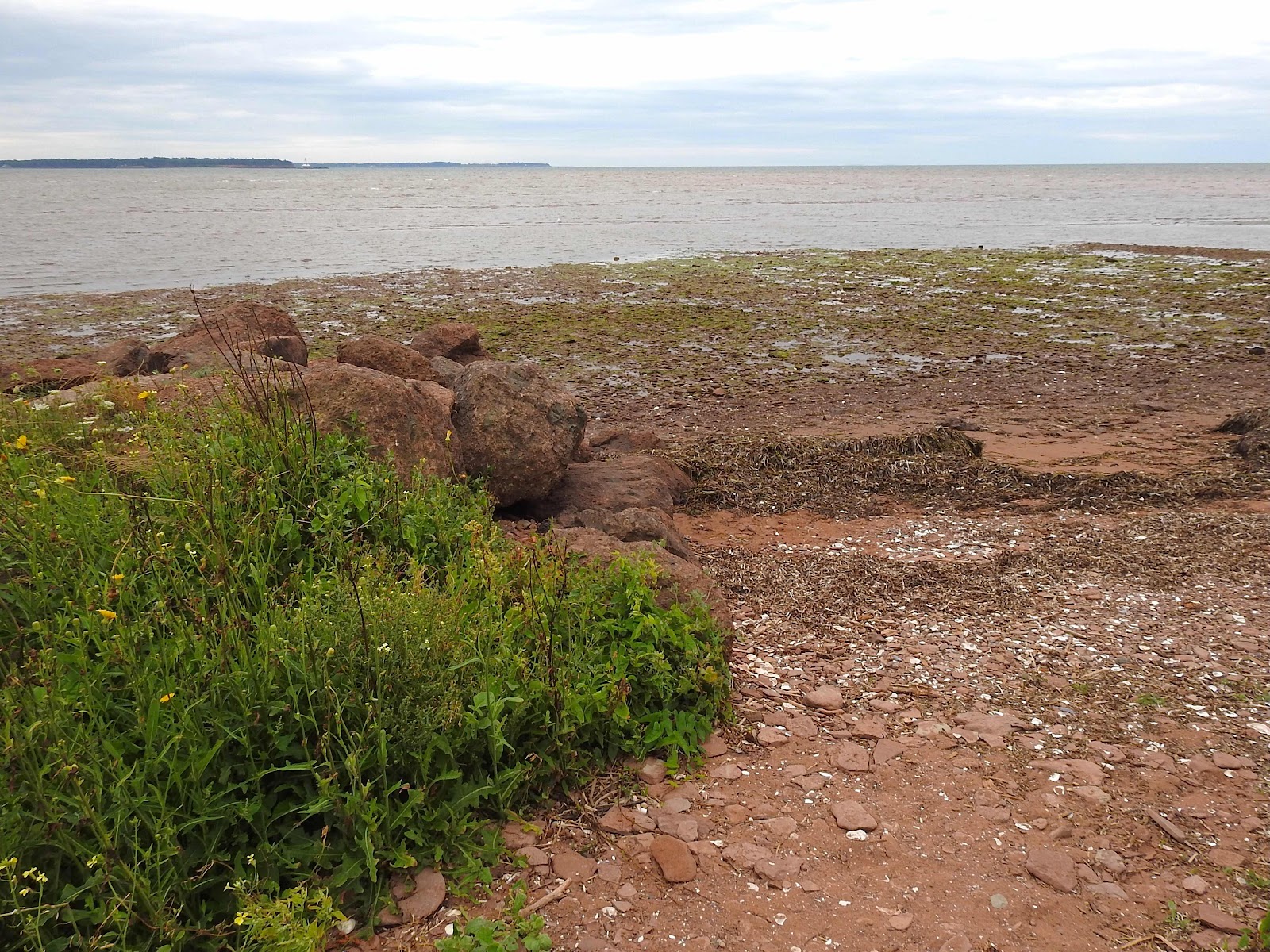 I like to sit on the rocks and watch quietly as they come, go and walk along the beach, feeding.

It takes a few minutes to spot the birds. This area of beach has small rocks and most of the shorebirds blend into the scene so well. In time, one sees movement among the rocks. How many birds can you see on this beach below? Hint: there are two sizes of birds there, larger Ruddy Turnstones and smaller Semi-palmated Plovers. 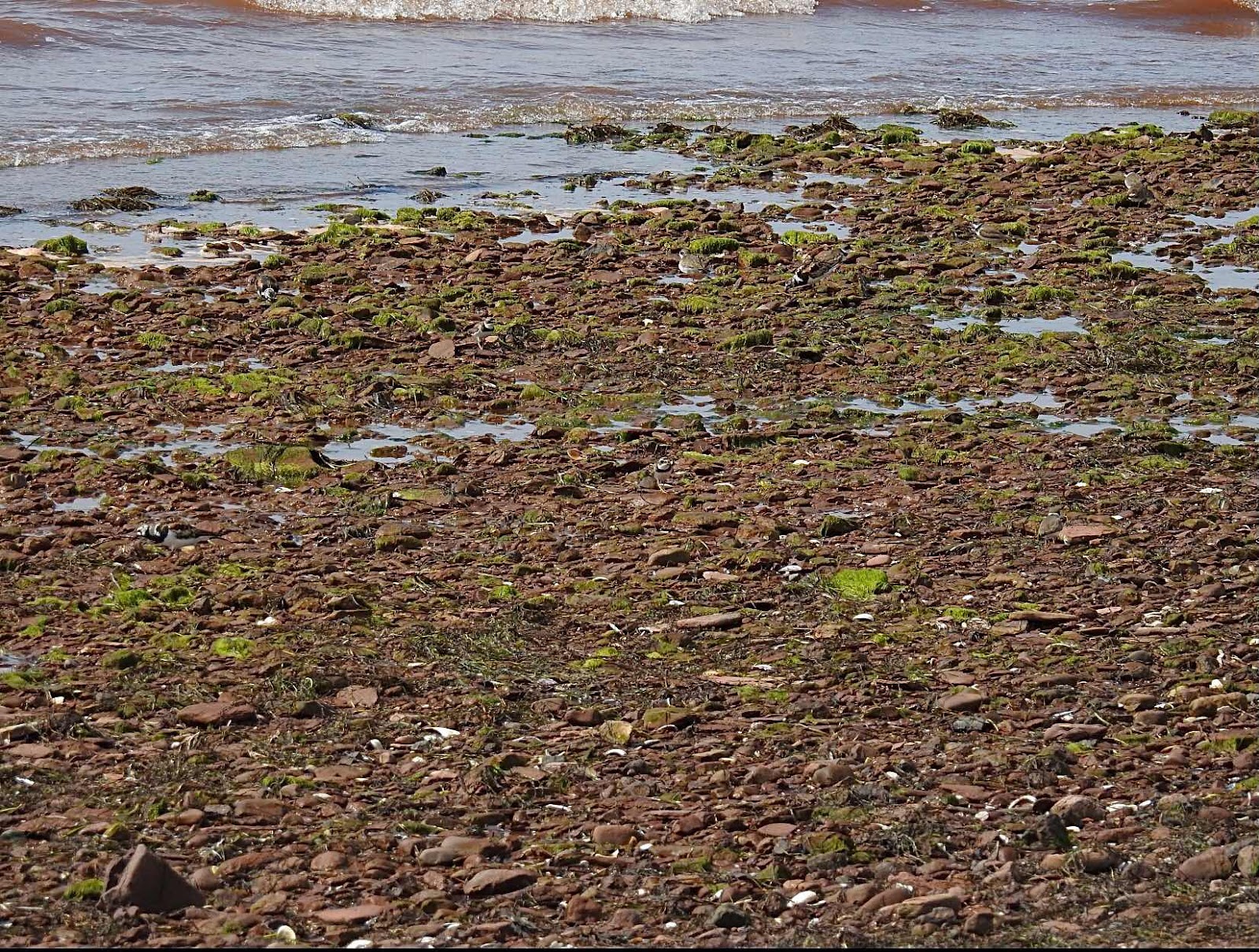 A scan of the water’s edge reveals other shorebirds as well. They forage in silhouette often, depending on their location in relation to the sun. Patience makes for better photos and easier identification. 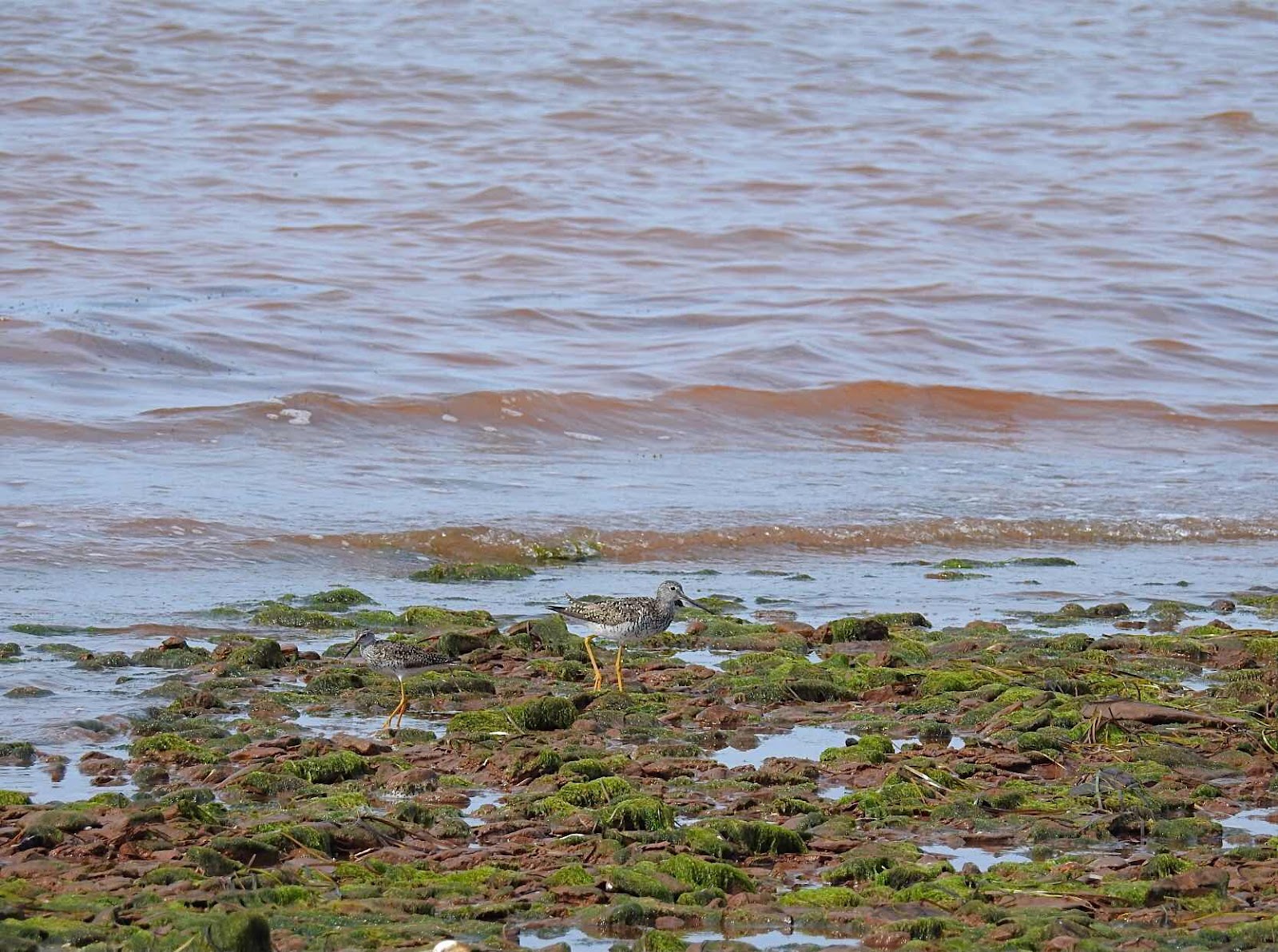 Then there are the larger birds. Recently, on a visit to Cape Egmont, we watched cormorants land on the sea stack there. Two of the birds had damaged wings which didn’t appear to impede flight. I wonder about their chances during the long flight south however. 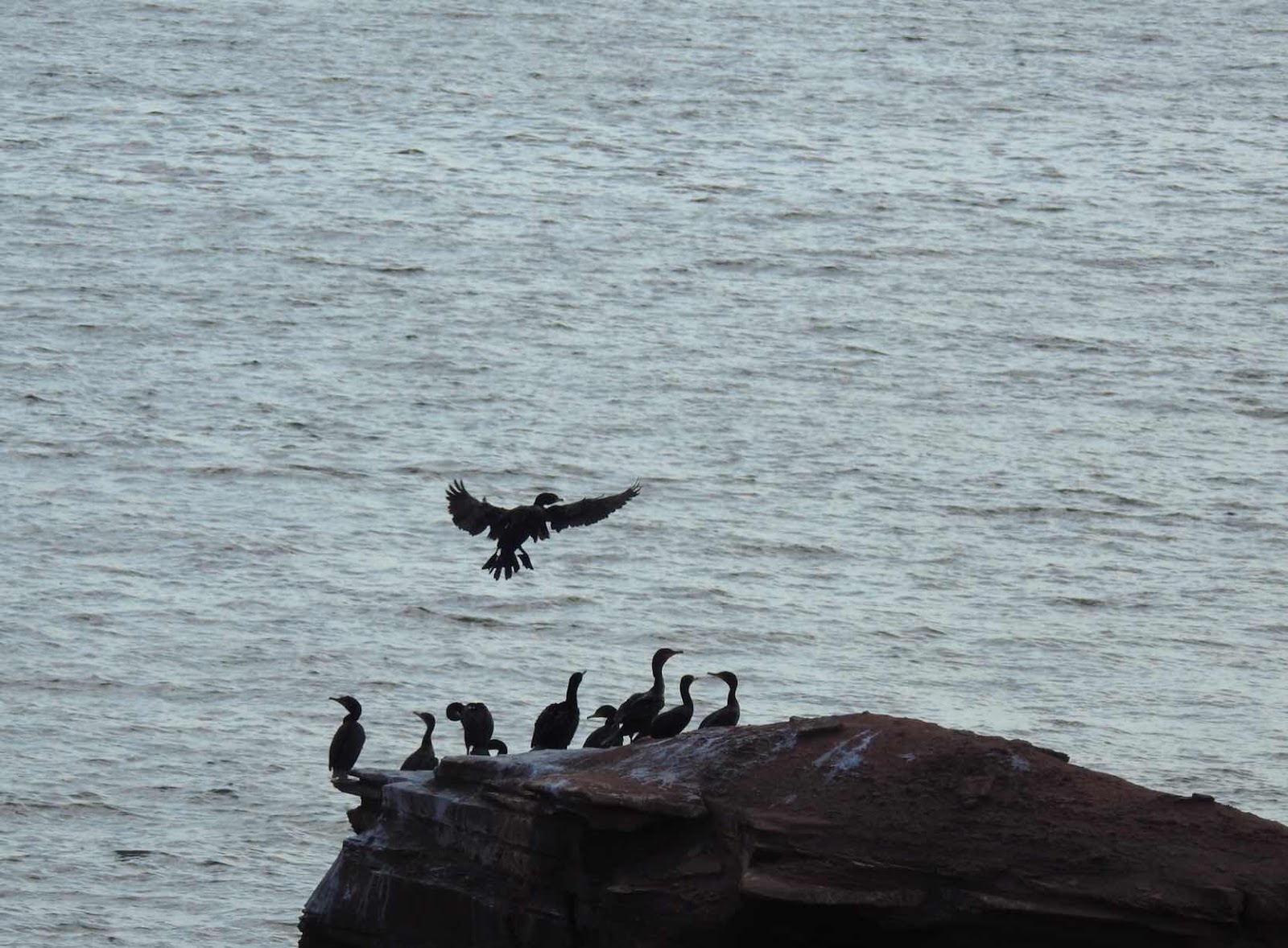 Along the boardwalk, several of the Blue Jays recently have had bald heads, probably due to molting. The feathers grow back quickly but make for an unusual sight among the Jay population. 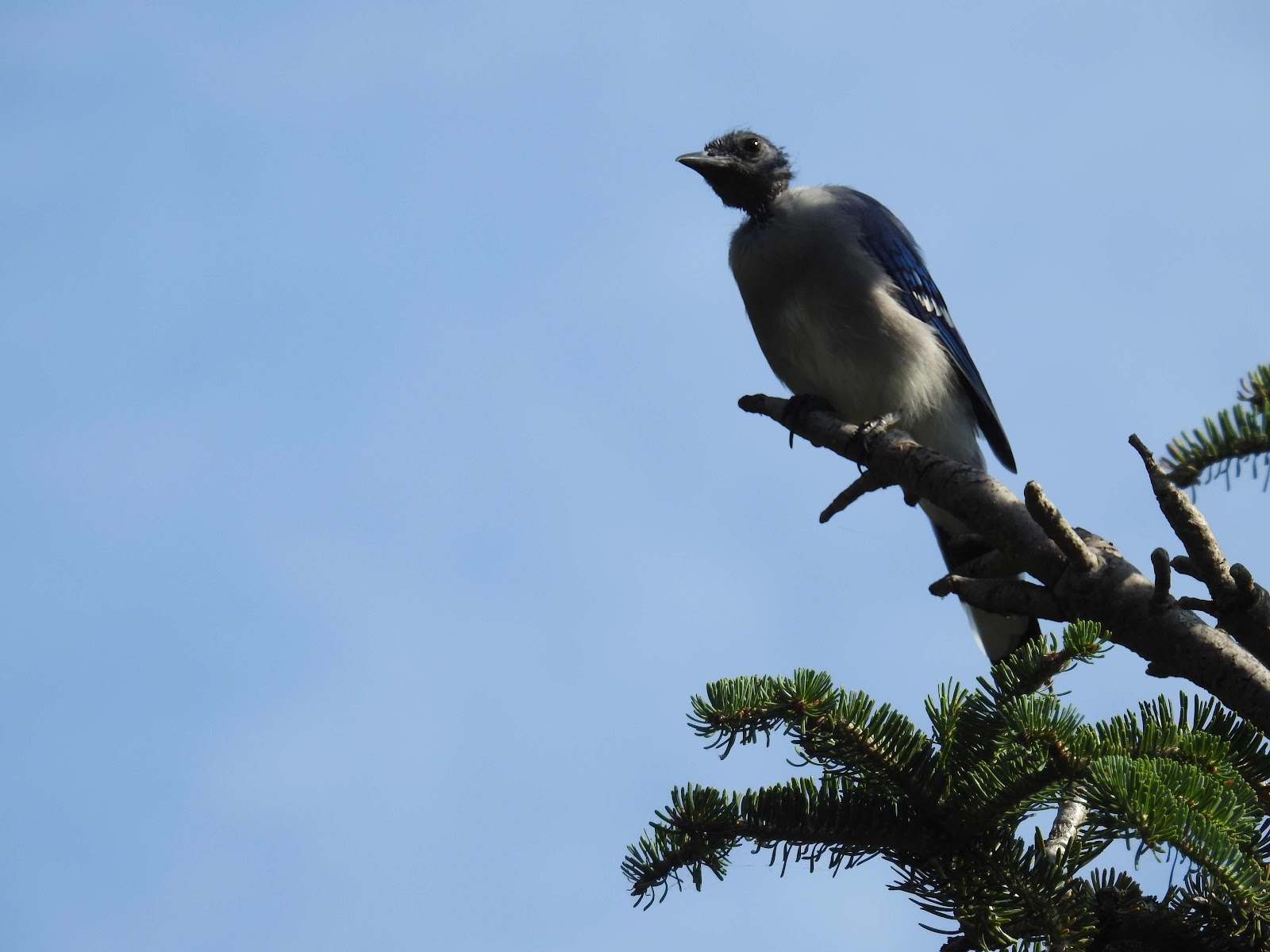 And finally, but consistently along the shoreline, the quiet as we sit and watch is broken by the sound of a shell dropping to earth from a gull above. 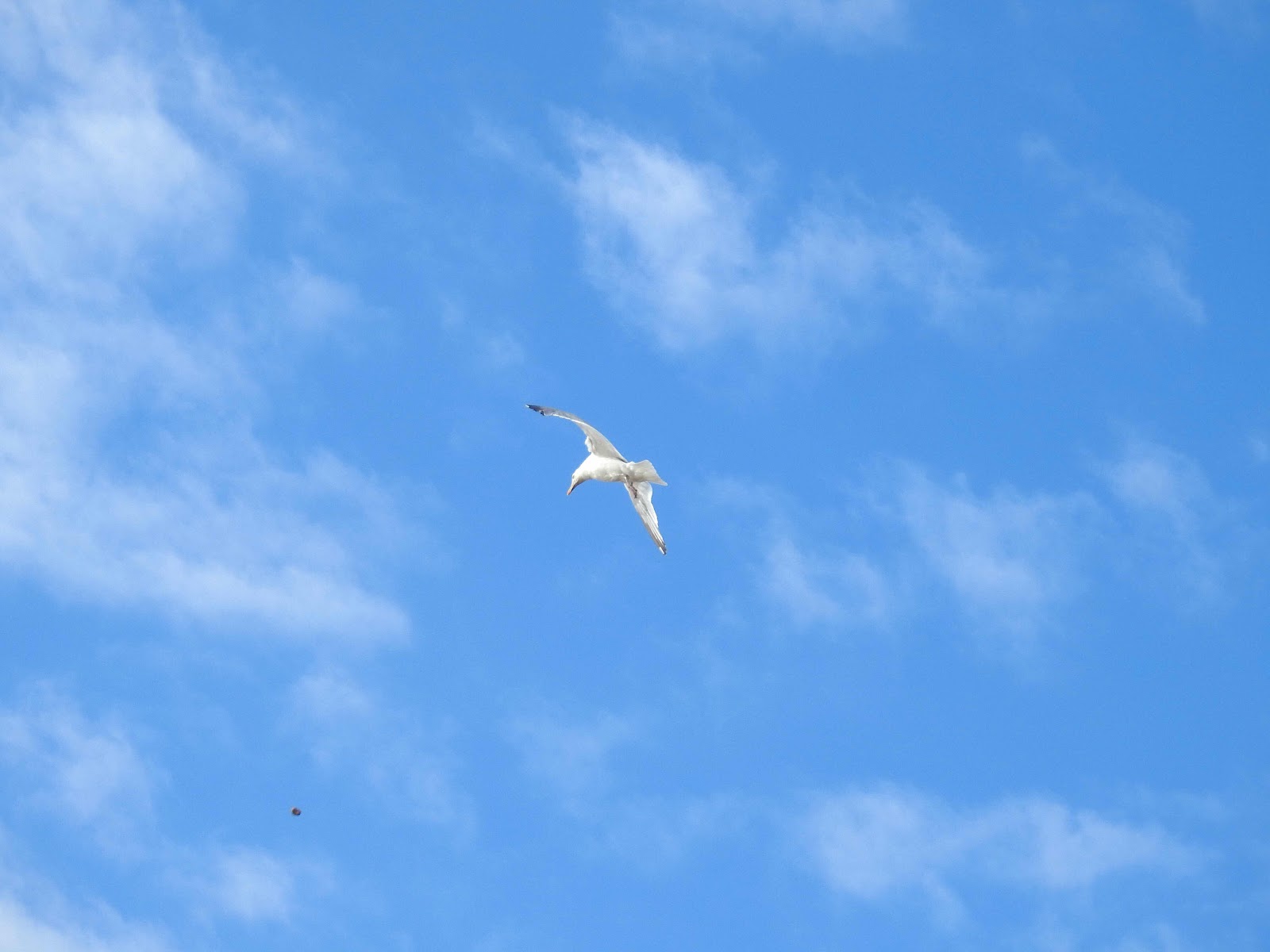 We saw something in an old snag recently and a close-up showed it to be a shell which could have been dropped prematurely by one of the gulls. 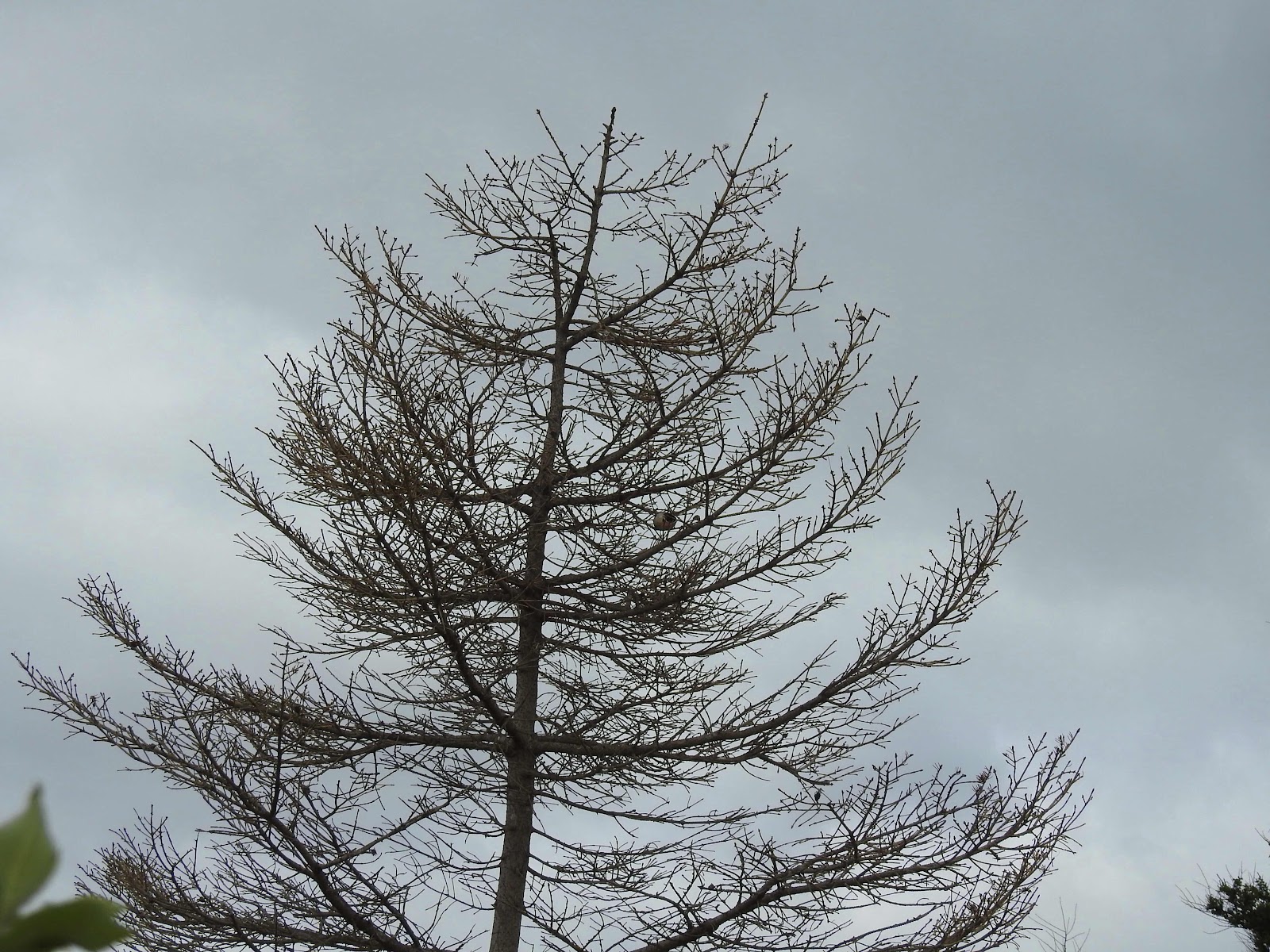 They will repeatedly scoop up the same shell and drop it until it breaks, then eat the food inside. 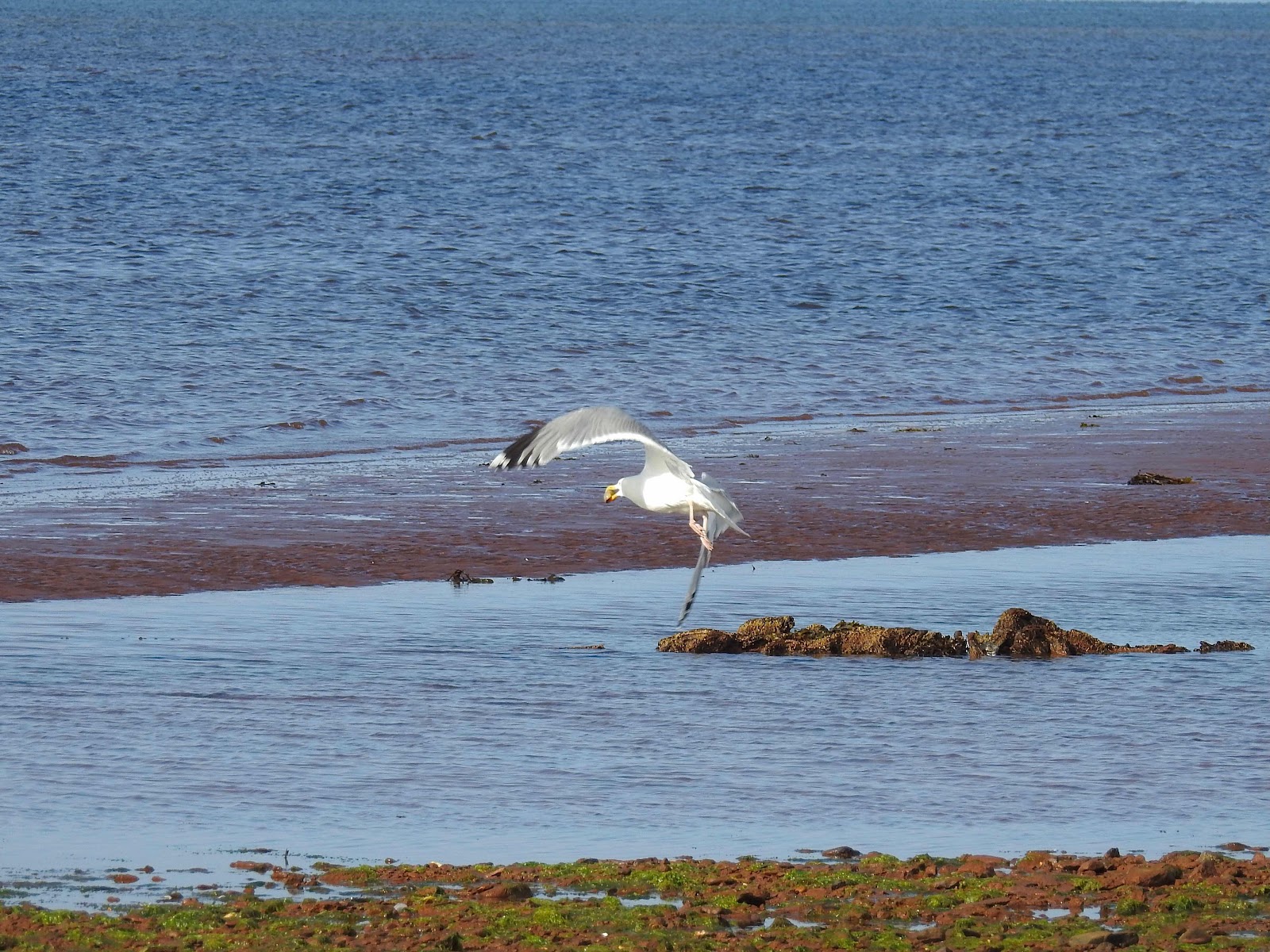 This time in nature is a great way to forget the cares of the world and just enjoy nature and life in general.

In the photo of the two species of birds on the beach, there are 6 small birds, Semi-palmated Plovers and 3 larger birds, Ruddy Turnstones.

Maebeme asked about molting in Blue Jays. The birds molt after nesting every year. The Jays on the boardwalk here already have their feathers back.

That last photo is a lovely action shot!

Outstanding bird shots, Marie, especially the shorebirds on the beach showing the efficacy of camouflage.

You captured some great bird shots here, Marie. I love to watch gulls break open shells like that. I wasn't sure how many birds were in that picture, but I did find some. :-)

You asked us to see how many birds we could find in image #3. Your photos have great resolution so I tried zooming in to make the photo full screen. I counted 11 birds. And I may have missed a couple because they blend in so well. 😊 I admire your ability to get right out on the beach! I do not think I’ve ever seen a Yellowleg out here on the West Coast. Another first-time for me is the Blue Jay with bald head. Wow, I didn’t even know that was a normal part of life for them. Neat capture of the gull dropping the shell … yes, I see them do that out here. They are smart about getting things open so they can eat the contents. Another fine post here, thank you Marie.

I love to sit and watch the birds. I keep a feeder for the reg birds and two for the hummingbirds just outside the deck. The cats seem to like the reg birds but not impressed with the hummers.

You are so LUCKY to live, where you can enjoy so much of the beauty and joy of Nature. but you know that! -smile-

Those little shore birds, my husband used to carve them. Back when we could go to Cape Cod every Sept., and sit on the then-deserted beach. We have one, on our mantle. -smile-

Love all your pictures. The first and last really made me sigh for joy. Little humidity here in E Washington state. I really miss seeing the ocean and I could almost smell the salt water from here with your photos. Thank you.

it's could you can walk in the morning, i think we are going to start to try to get up earlier and do this!! i can use my zinger!!

the lesser and greater legs could easily be missed, if not for those yellow legs...great eye spotting them!! i have a couple of jays here that look the same!!!

i forgot to say that i see maybe 7 birds in picture #3. i would have seen zero had you not told me to look!!!

Lovely shots. My eyes are not good, and I suspect I would need movement to see many of these well camouflaged birds. Thank you.

I like the words and picture of slipping into the scenery. That’s such a great description.

Such a wonderful place to wake up in the morning and to enjoy. The birds are so pretty as well as their surroundings!

Wonderful photos! I'll admit I had a tough time finding any of the smaller birds in the photo.
Is the molting normal for the blue jays?

We have had so many heat alerts and heat warnings that it is difficult and actually not advisable to venture out for a walk.

Locally it's a lot cooler than it was, with rainstorms yesterday breaking the heat.

Just the way you describe your time there, is relaxing. Watching birds or nature in general is so enjoyable.

The ingenuity of those birds is amazing, how did they ever learn to drop those shells!?!

Hello,
I enjoy your walk and the beautiful birds and scenery. Those gulls are so smart. Take care, enjoy your day!

What an amazing place to just sit and watch the birds in action. I got a bit cross-eyed trying to find the birds. They sure blend in with their surroundings.
I love the gull in flight with the shell in his beak.
Great photos.
Sue

Outstanding bird photos. I loved all of these pictures.

two photos with flying birds on in the sky and second on the water are magnificently taken .they look like beautiful painting to me !

thank you for exceptional virtual trip ,it is joy to the soul!

Beautiful photos! My favourite is the last one.

Ditto Ruth Herbert's words. With your extremely hot humid weather, bird watching by the sea would be a real pleasure. I only managed to count 7 birds that I was confident that they were actually birds. Such wonderful camaflouge.

Marie, you always teach me something. Today I learned about the blue jays molting and the gulls dropping shells to open them for food.
Makes me think that these birds work all the time at getting food so they can live. In the early days of our country, people worked that hard physically to put food on the table. I come from a farming family and I well remember the hard work of my family members to make the crops and feed our family. I love your blog.

I am on phone and hope to remember to look at the photo with the birds that blend in...I can only see two on here.

Being out in nature helps me so.much but I seldom get that now.