A visit to the Cape

It was hot with the usual Prince Edward Island breeze making the temperature bearable. My husband and I drove along the French shore of the island, just west of Summerside, with the windows open, the breeze flowing through the car as we enjoyed the sea view. We were headed to Cape Egmont.

The Cape is a headland jutting into the Northumberland Strait and just off-shore, attached to the shoreline via a stoney umbilical cord, 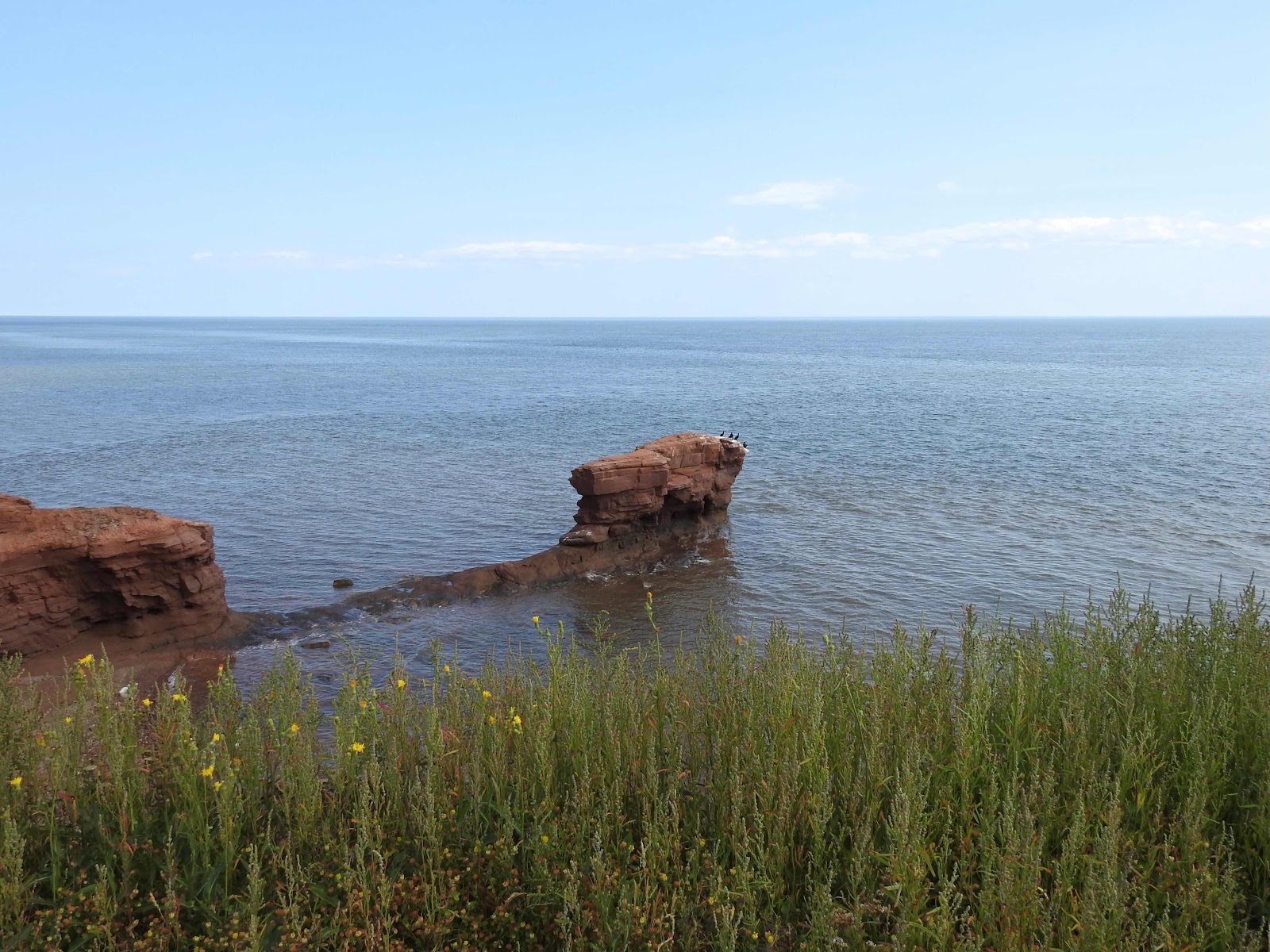 a sea stack is visible below the cliff. The red sandstone in this area has a thick layer of soil above which is easily eroded. 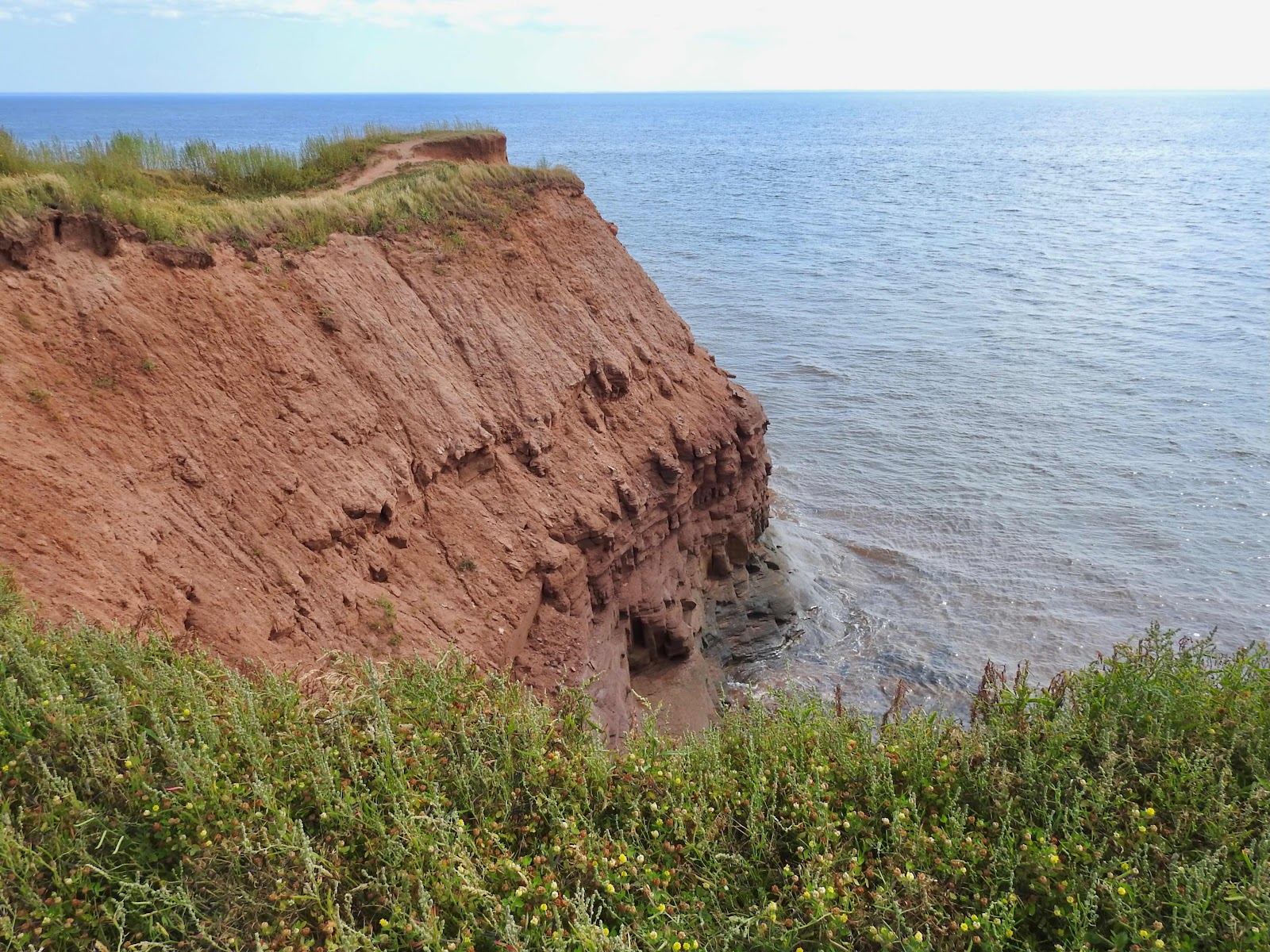 The stone takes a bit longer.

The sea stack has two holes these days, a larger one on the landward side. 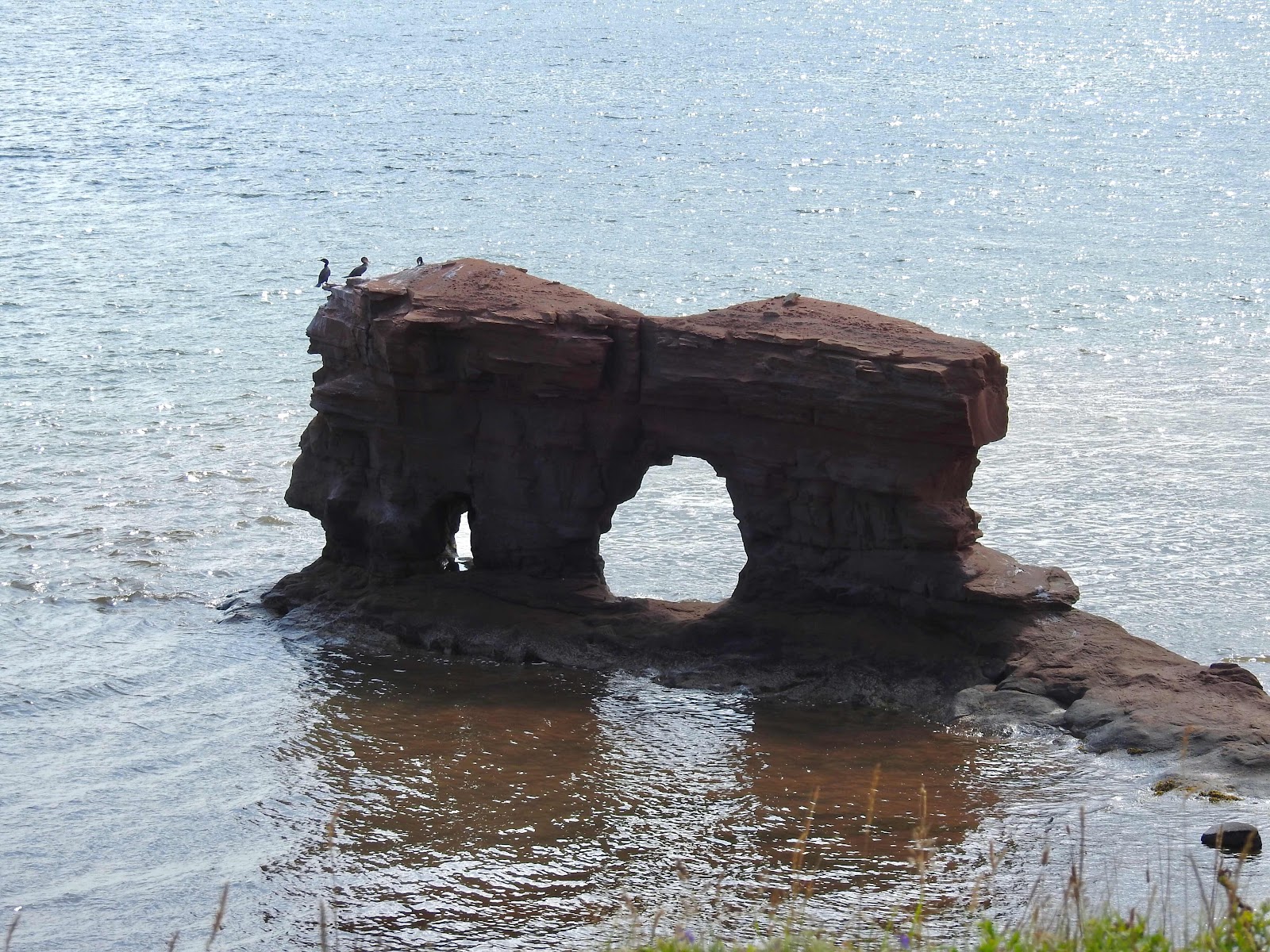 Above is a great perch for birds, especially cormorants on this particular day. One with damaged feathers makes a curious sight as it approaches for a landing. 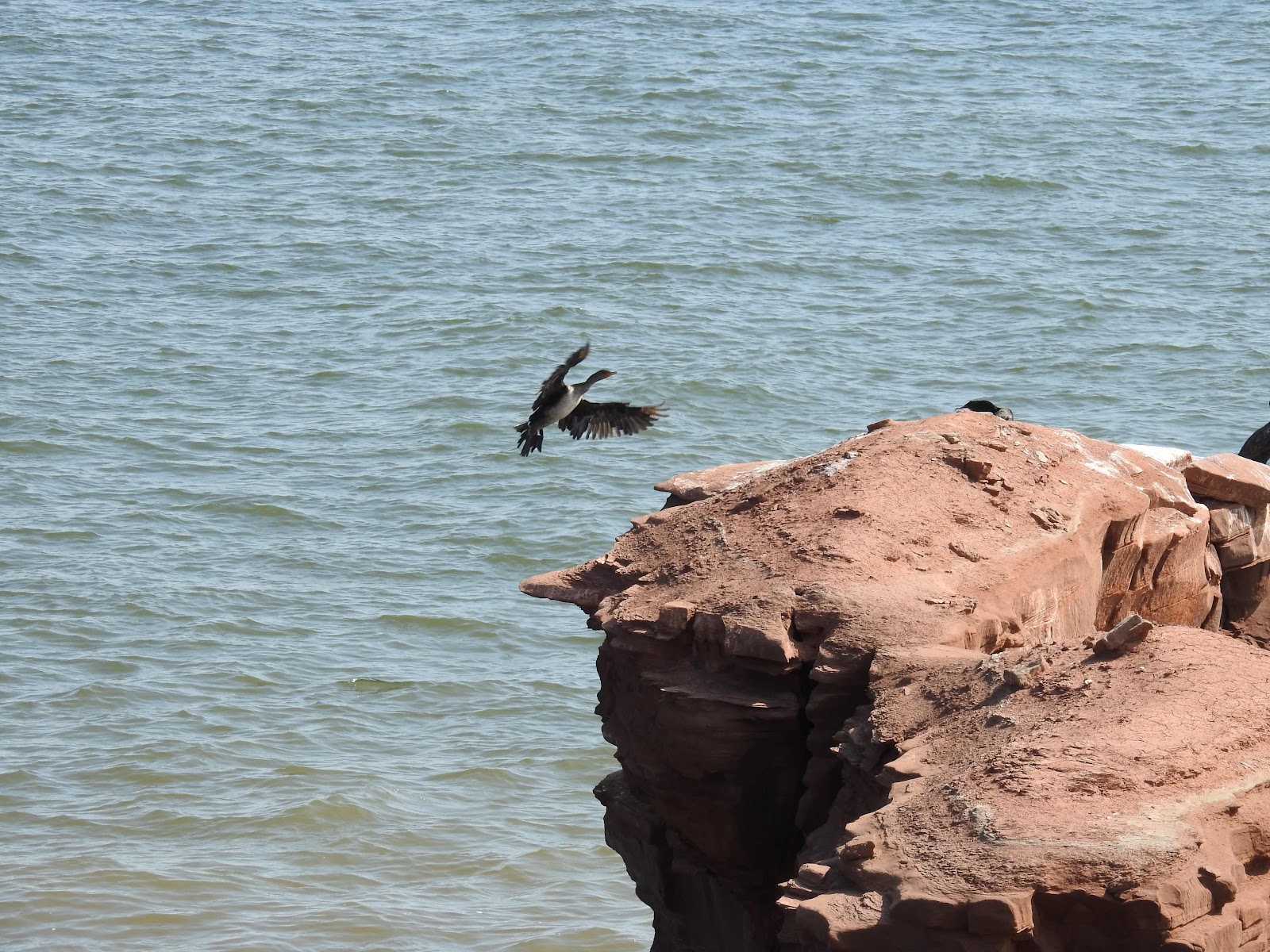 Some on the perch dry normal looking wings in the breeze. 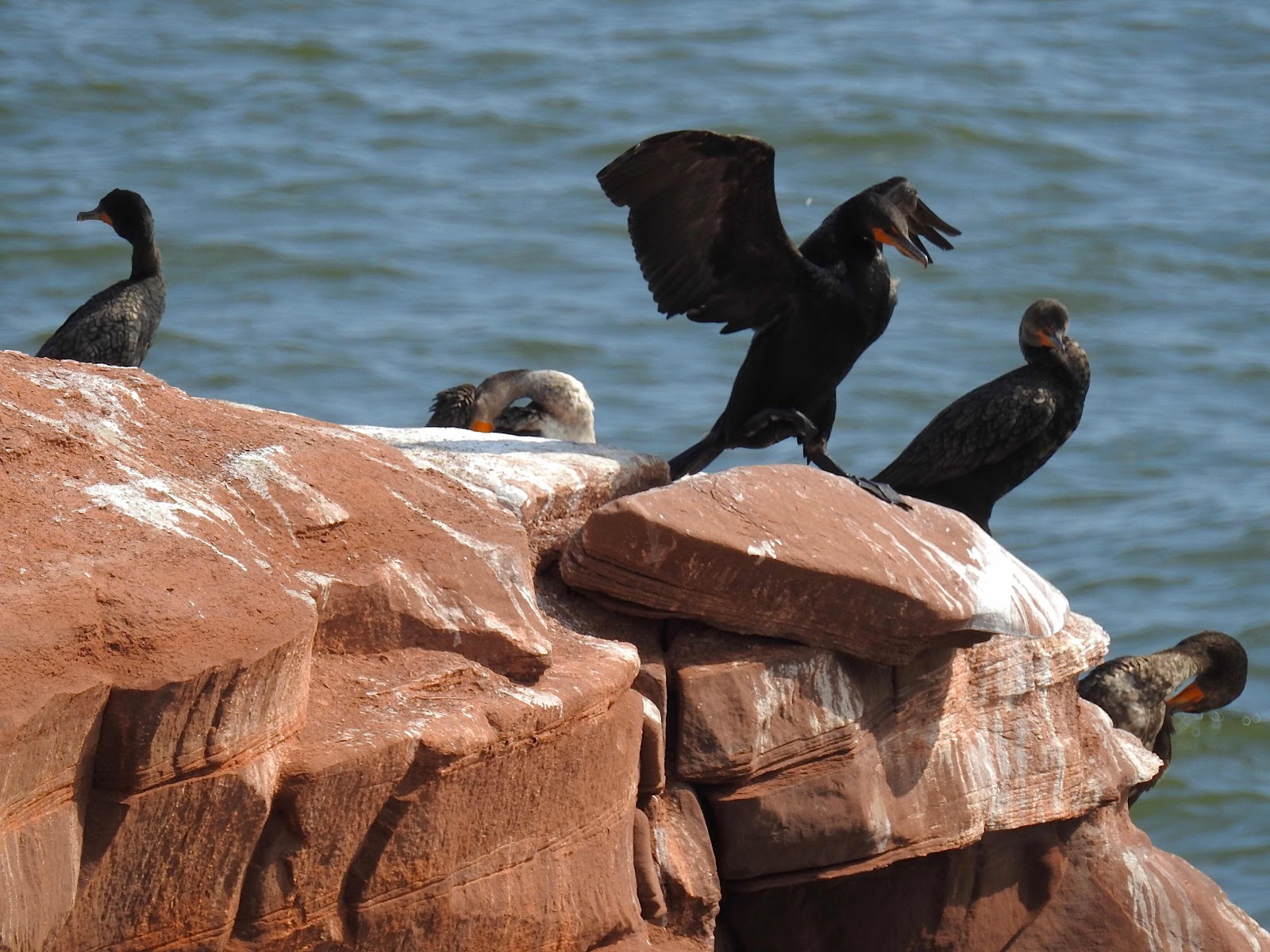 Walking along the headland, one can look east along the coastline as far as Union Corner. 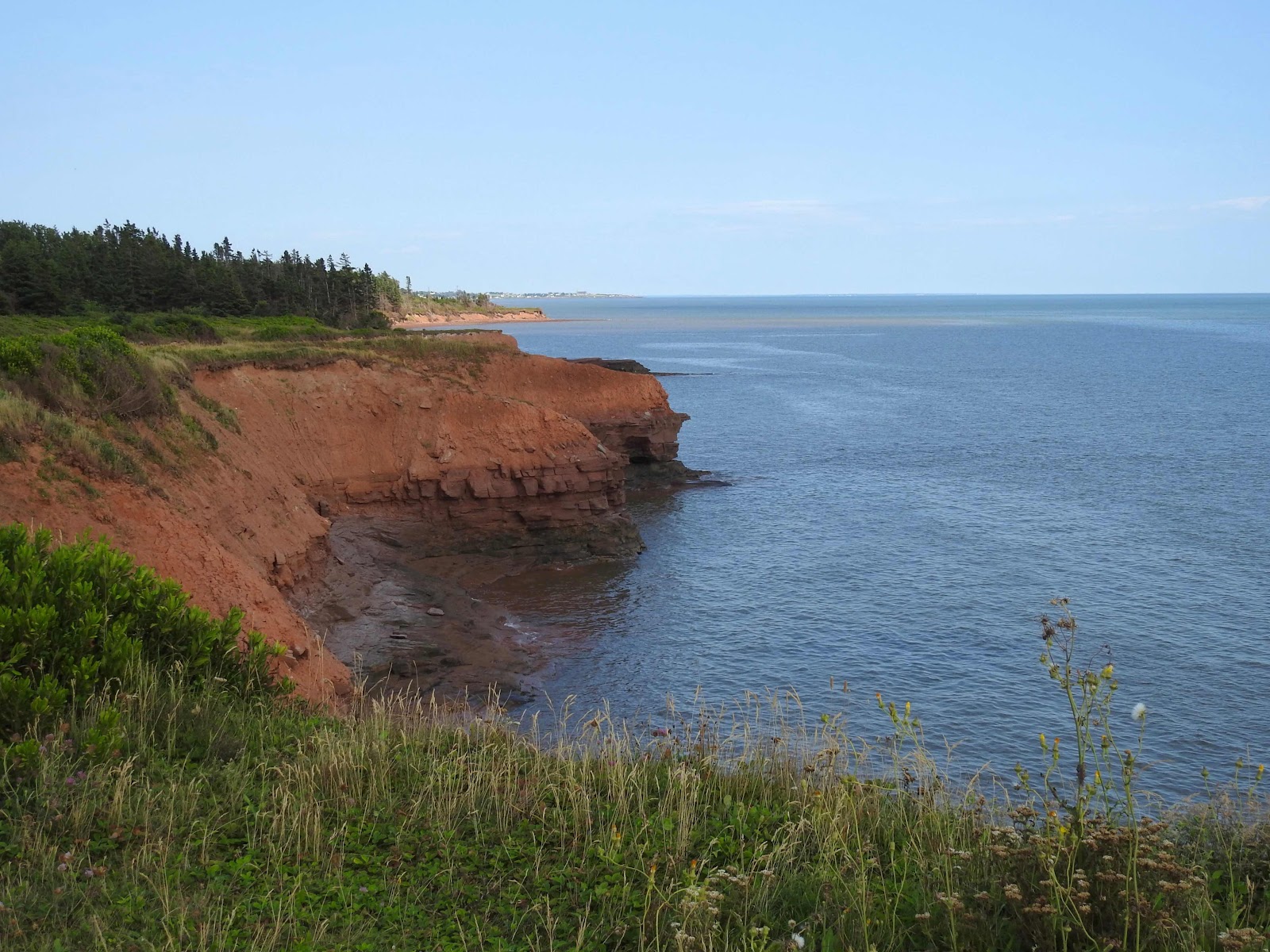 Looking west, there is my husband on the narrow strip of land opposite the sea stack taking photos. 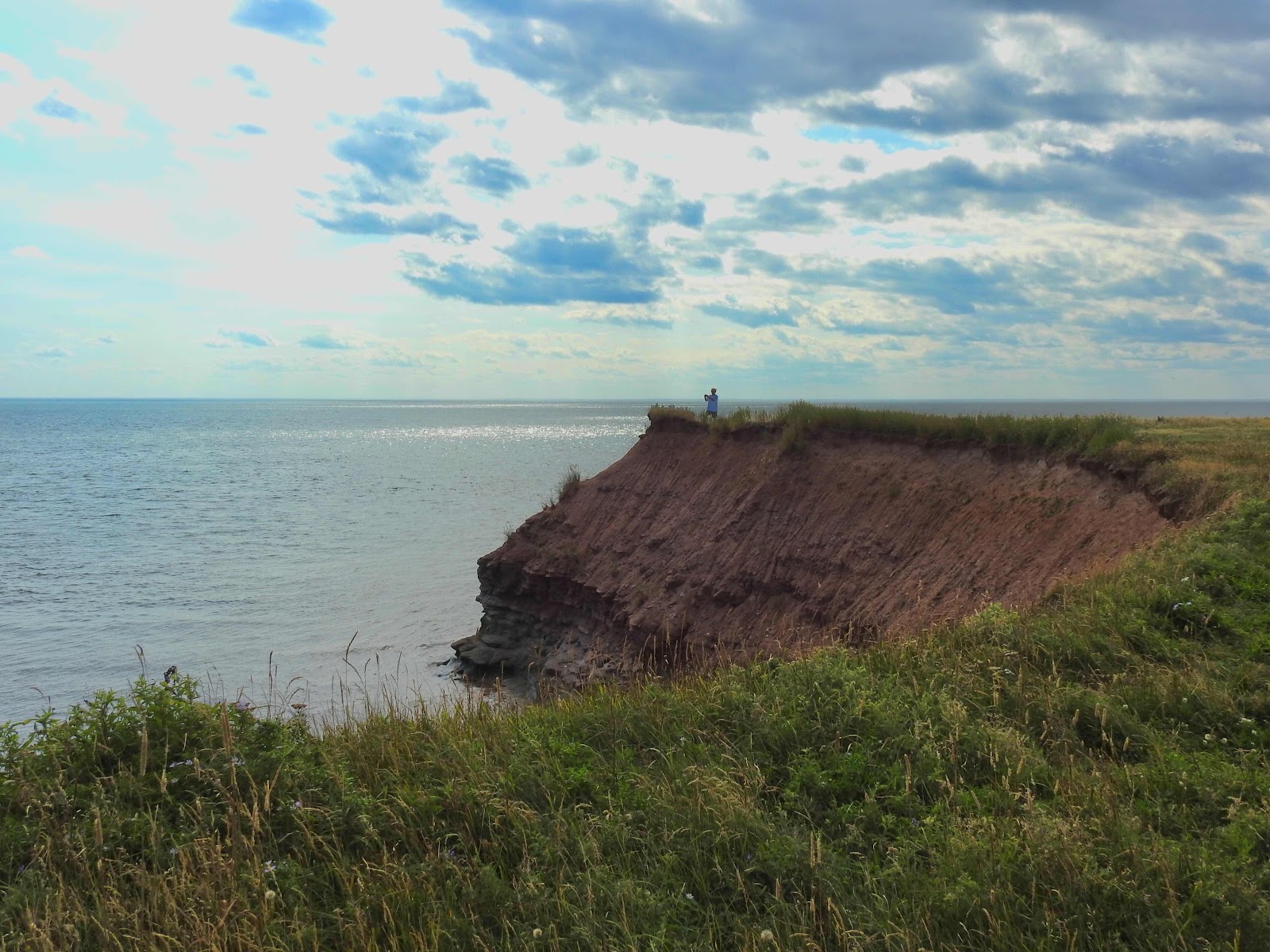 I could not stand in that narrow place myself and cannot watch my husband there. Instead I focus on the lighthouse and beyond, 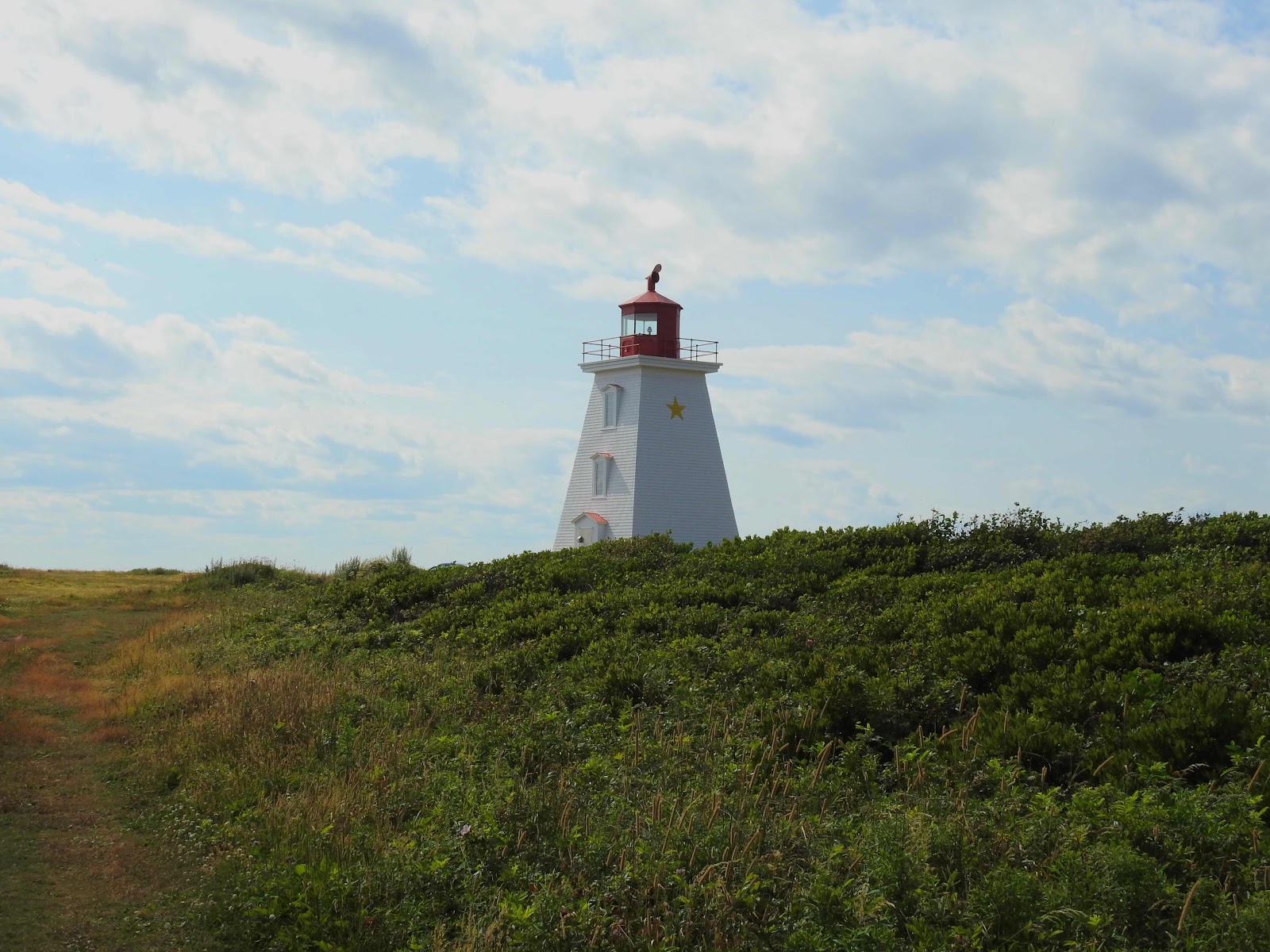 the wharf where lobster boats leave today as the second lobster season begins on the island. 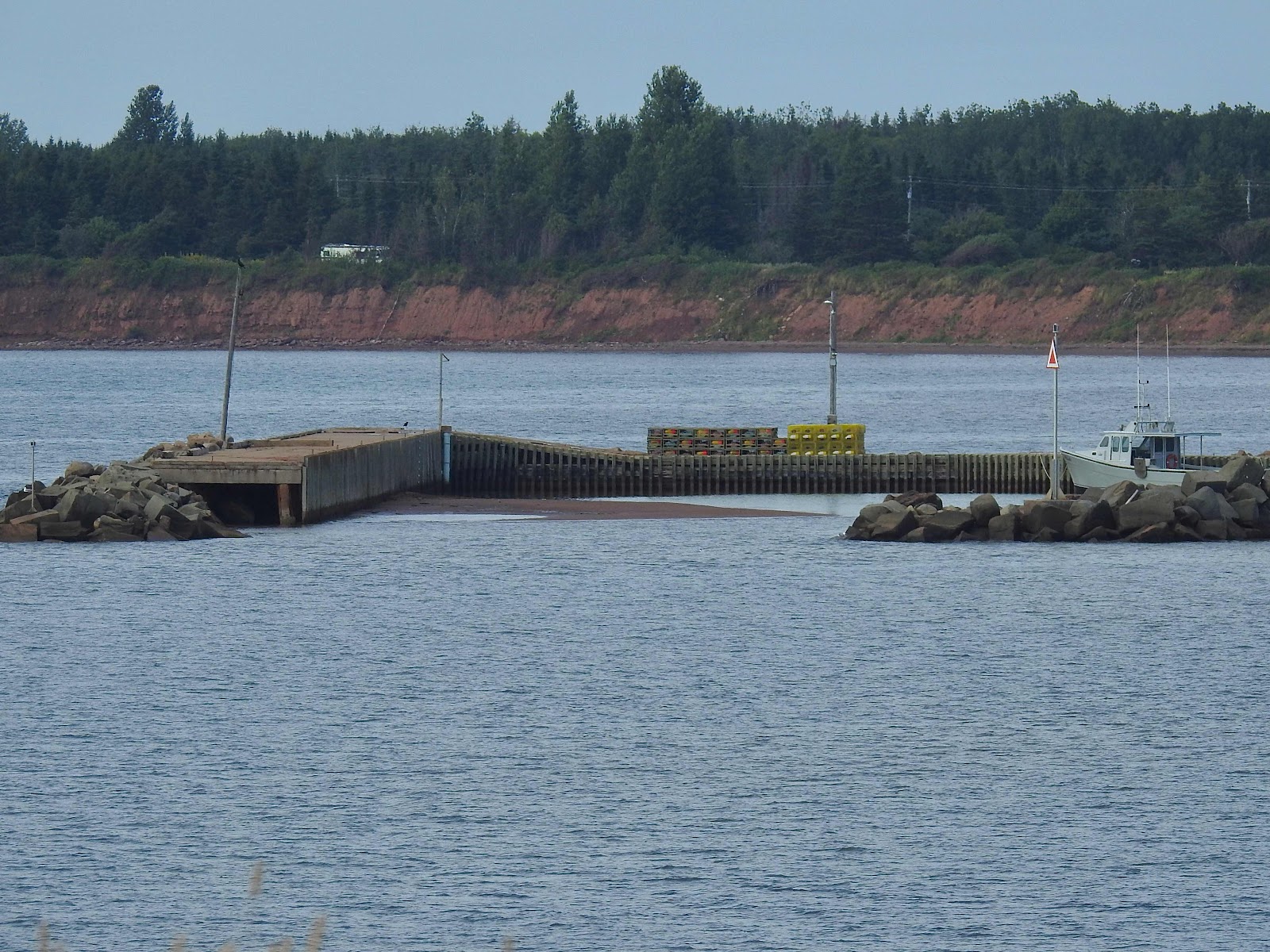 Off-shore, jet skis or sea-doos zip along the coastline. They always remind me of snowmobiles, a common sight in winter in Canada. These summer versions don’t require as much clothing. 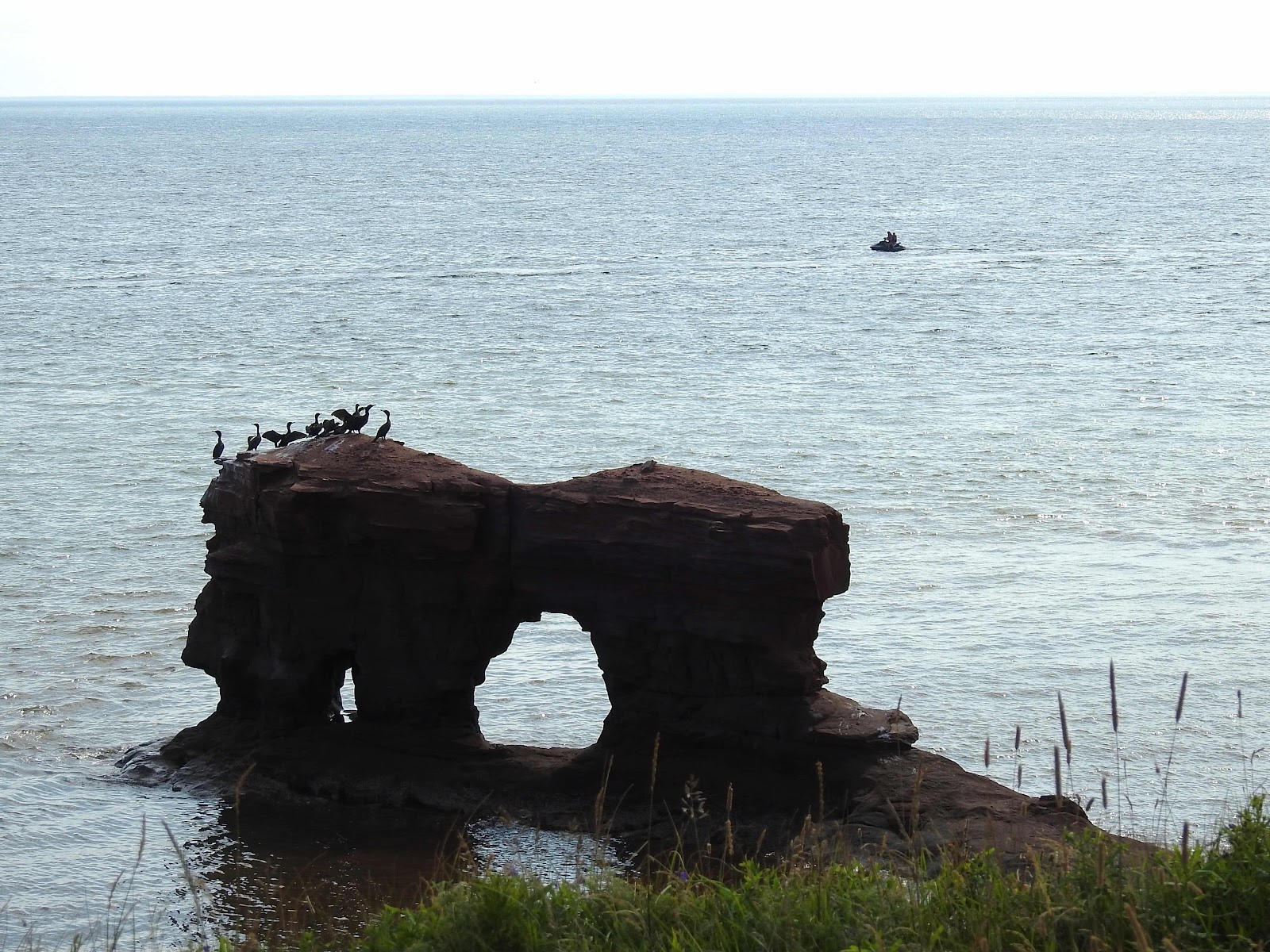 Leaving the Cape, we saw a hare crossing the road. I had to settle for a photo through the car window. 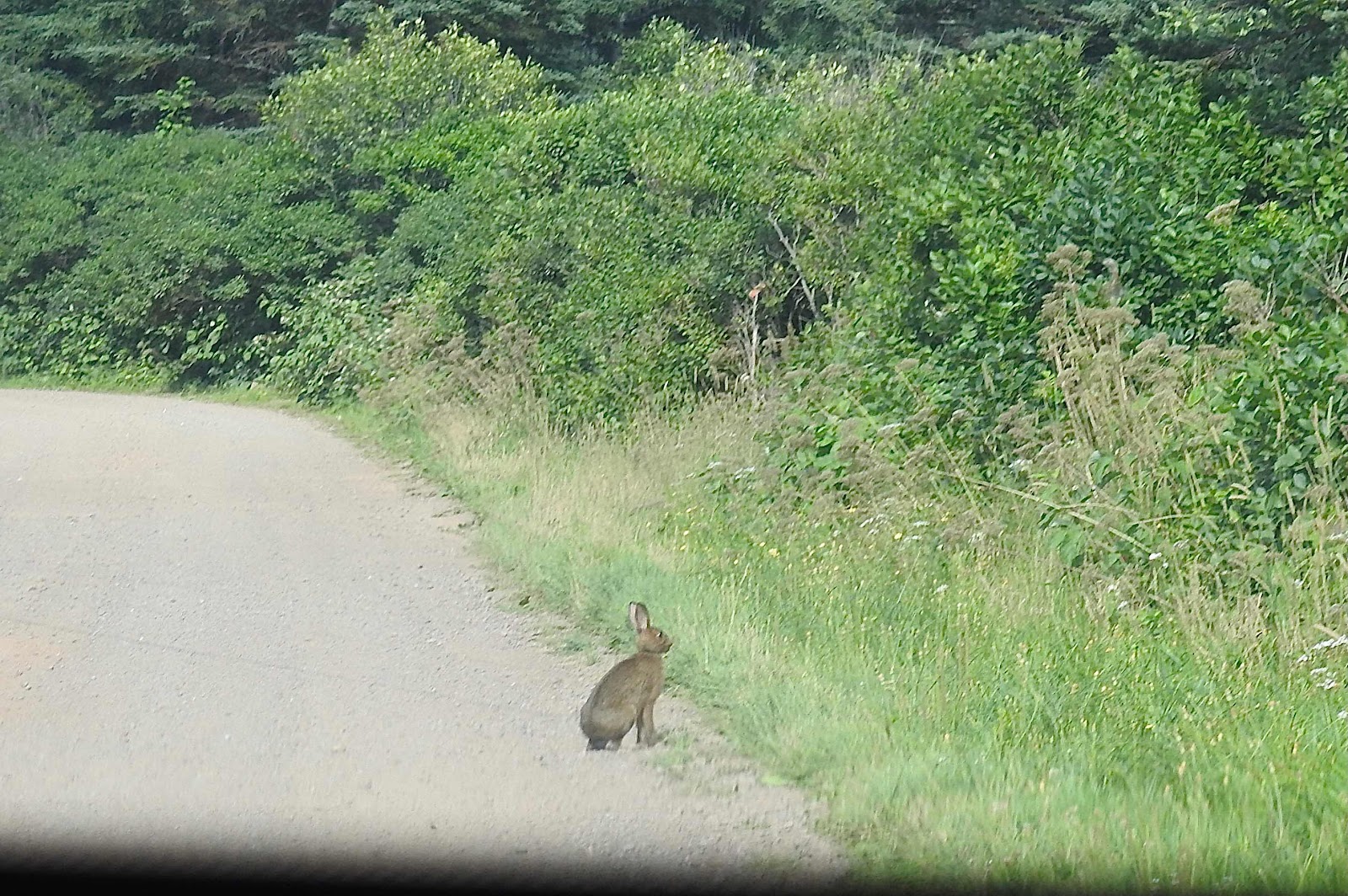 On that hot Sunday afternoon, on the way home we stopped for ice cream at a dairy bar in the area. A horse watched from its trailer as the driver lined up to order. The horse wants some too! 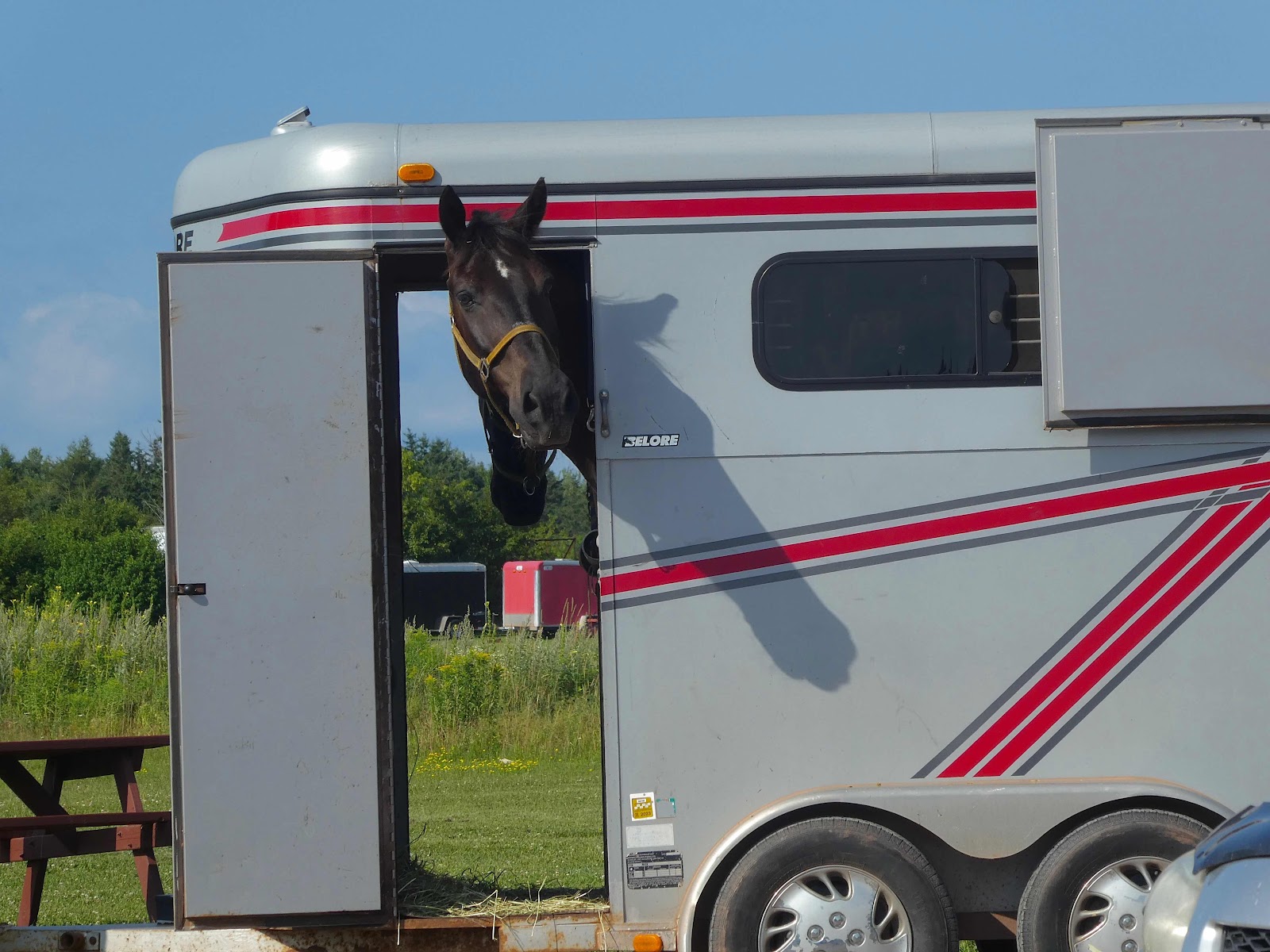 Are blogs you once followed not appearing on your blog feed any longer though you haven’t made any changes and those blogs are still active? Is there a fix for it?

We did not see that sea stack. It was incredible! I have not heard of that issue with blogger, hopefully there is an easy fix.

I haven't noticed blogs disappearing from my feed but now that you mention it, perhaps I should check.

Those sea stacks are amazing...

I am not seeing all new postings.. I now have to click on each blog, to see if they have posted new posts.

The sea stack is such an interesting formation. I visited Hopewell Rocks in New Brunswick several years ago and was fascinated by them. I didn't realize we could have visited on in PEI as well.

I haven't noticed missing blogs, but now that you mention it, the number of blogs in my reading list has dropped. I'll have to do some hunting.

Blogger hgasn’t been quite right sine it last went wrong. 😀

But I still see blogs thru Feedly and I don’t think I am missing any.

Some comments do not appear to public view sometimes, and I can’t comment via the phone to save my life.

Another delightful series.
Could the cormorant be moulting?
And yes, I know of at least one blog that no longer updates in my reading list - and haven't been able to fix the issue.

I gave an involuntary shiver when I saw your husband on the edge out there, so I know how you must feel. Beautiful place though :)

Great pictures. I am seeing all my regular blogs. For a while I had trouble leaving a comment, but I switched to using Google Chrome and then it seems to work.

Beautiful scenery. What I like is that you were zipping along with windows open and a breeze going through the car. That's the way it was before we got air conditioning.

I also use Chrome as my browser and get my blogs through The Old Reader, which seems to work great. I love all the pictures of the sandstone eroding so quickly and changing constantly. :-)

There is nothing more annoying, winter or summer, than to be quietly enjoying peaceful surroundings, nature and the environment, only to have it shattered by the noise of those infernal machines. As for blog issues, I am no longer notified of your posts, Marie, and there is nowhere on your blog either to follow you or to request email notification. Can you not add this feature? The only way I can follow you is to check in now and then to see whether you have added anything new, a bit of a hit or miss proposition at best.

Blogger is so frustrating. My numbers have dropped way down on people commenting and things don't always seem to be updating.
I just keep plugging along and going to my sidebar and clicking on each person to see if there is anything new to view.
Love your photos and I do love riding with the windows open to enjoy the salt air.
The horse photo is a prize winner to me.
Heights and me are not friends so I would be in the same place you were. Gulp!!!
Sue

With you on the narrow strip of land. I got caught up on on once at Perce and it took both my teen daughters to get me down. Now I really look where I am going, gulp.
Blogger sometimes does weird things. AC mentioned problems a while back.
I have your info in book, just in case. Love the bird photos. Loved PEI during several visits.

Wow! What a landscape! So beautiful...
Great pictures and best wishes for a happy weekend!
Titti

I applaud your decision, about your hair. I'm sure you are happy to have make it.

the cape provides for some really pretty images!! i see your tiny, bitty husband, on that tiny, bitty ledge. i would have looked away also!! have a nice weekend marie!!

i have been having the same problem marie, and i have also had a problem leaving comments. i write them but on those blogs that have to be reviewed, i don't know if they ever post!!

also, friends who used to get emails when i posted don't get them any more. lots of changes!!!

did my comments come through???

What a nice post, Marie. When I read your title I thought you were headed to Cape Cod. (silly me)

I have had problems with posting comments but finagle around until I can make it work.

Look like a lovely day on Island.
Coffee is on and stay safe

Hello,
I love the horse waiting for the ice cream, cute. The bunny is adorable.
The views of the coastline, the cormorants and the sea stack are all beautiful. Great series of photos and a lovely day. Take care, have a great new week!

Hi Marie, Thanks for taking us along to Cape Egmont. Many excellent photos. Image #4 is fascinating with the Cormorant approaching for a landing. That is quite a view looking up the coastline to Union Corner. The shot with husband across the way is great for giving a sense of scale. Love the lighthouse. Enjoyed the entire post, thank you for sharing. I’m not aware of the blog feed issue. However, several blogs have mentioned problems with leaving comments. I notice several people suggest changing browsers. Perhaps Blogger just works best with Google’s own Chrome browser? I hope we will see some answers in the comments. Thank you so much for your kind words on my latest post! A very good day to you and yours. John

Lovely scenery! Those red rocks are amazing and I love the horse. I hope he got his snacks.