With the beautiful weather this week, it was time to tackle the vegetable patch again. We had already boosted the soil with some composted sheep manure. It was time to add some seeds. Over the last two summers, I planted too much in the garden box and am determined not to do the same this year. I needed some string and nails to section off the box to help organize the planting. Of course, my husband, Rick had everything I needed.
While he assisted me, he told me the story of the kite string which we used on the box. Years ago, in the late 1980s, we visited my family in Mount Pearl, Newfoundland in late August. Mom's next door neighbour moved to Labrador that summer and left this reel of string on the lawn. It was there for the entire time we were visiting. The day we left, Rick picked it off the lawn and took it home to Grand Falls with us. It was not used until this day. 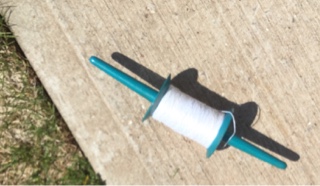 Like his grandfather, Ern, and his father, Melvin, before him, Rick keeps things, just in case he needs them another time. This is Ern Smith's legacy, that genetic make-up that causes his grandson to hold on to something because it might 'come in handy' later. And so it did, more than twenty five years later. 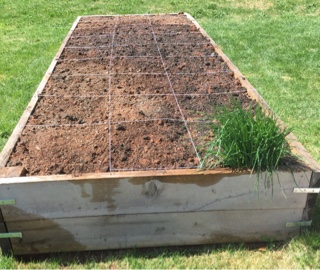 We laughed about the history of the string and thought of Ern while we worked on the garden. It was a great day in every way. 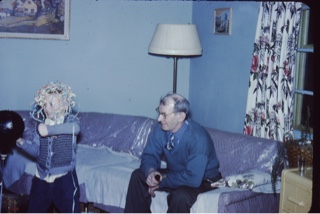 Great story today!and they say we don't recycle! Dad had recycling down to a science and then some!!

That generation didn't ruin the environment. They used everything, repeatedly.

This is a great story. Indeed it is important to save things for one never knows when you might need. We got more snow last night and now we have a blanket of snow on top of the thick ice. This year has been an icy year. I can't yet think of gardening but I dream of it a bit. Have a wonderful week!!

You too, Angela! We are having freezing rain tonight!