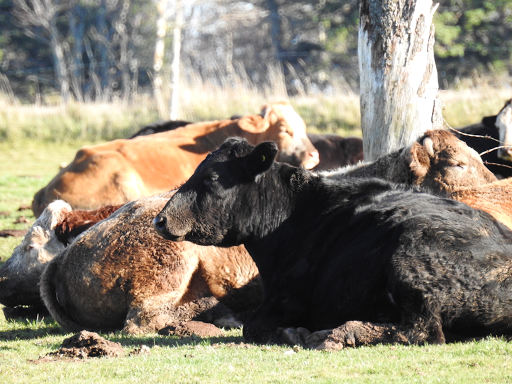 On a glorious November day, my husband and I headed to the hiking trail in Breadalbane and brought lunch with us. We always take time for a picnic.
There are two entrances to the trail which parallels the Dunk River. We crossed Hal's Brook before we reached the main part of the trail along the Dunk. In various places along the river, the sound of the rushing water fills the air. 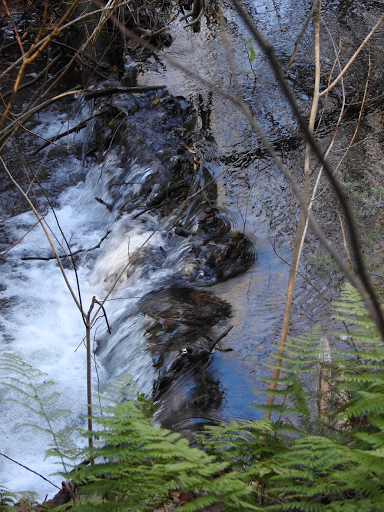 We followed the trail through the mixed forest which had some mature coniferous and deciduous trees. The trail wound its way through areas of thick undergrowth of fern 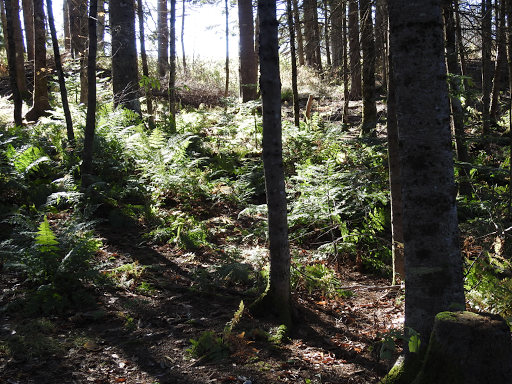 and other places where little light reaches the forest floor. 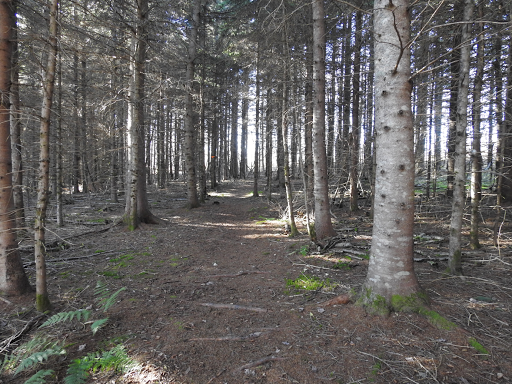 Overhead, there are snags throughout the forest, 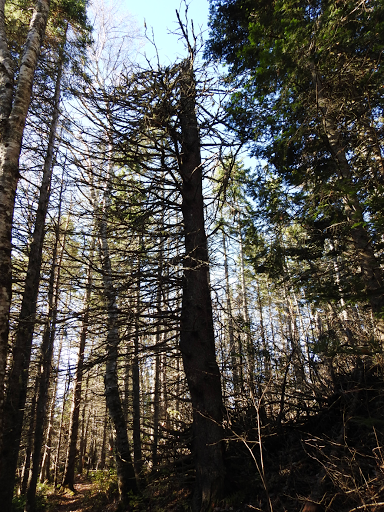 those old tress that have died but are still standing. One curious tree in its day had developed branches only on one side. Lateral roots of some trees crossed the trail in a few areas, 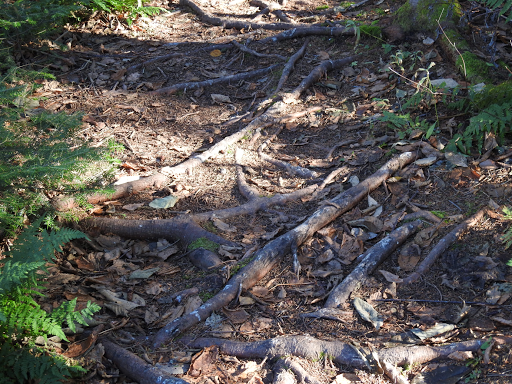 which meant we had to be careful walking. A few trees appeared to be blown over, exposing a relatively shallow root system. 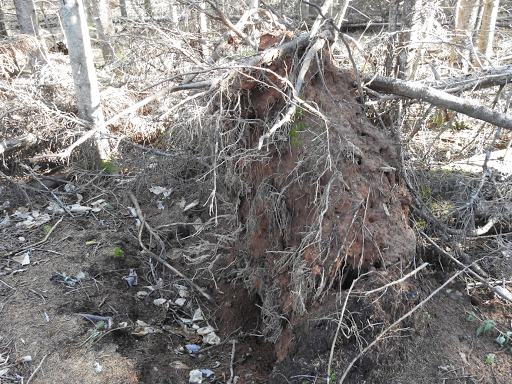 The ground in different areas was covered with maple or birch leaves, 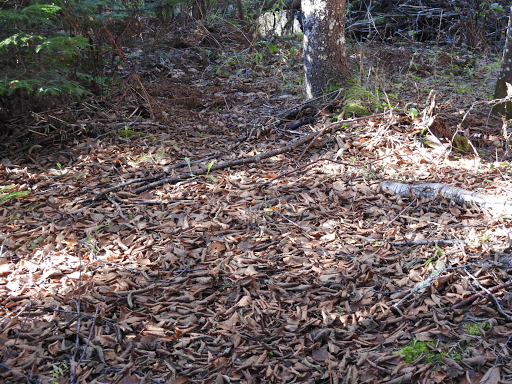 pine needles from the lower branches of the pine trees 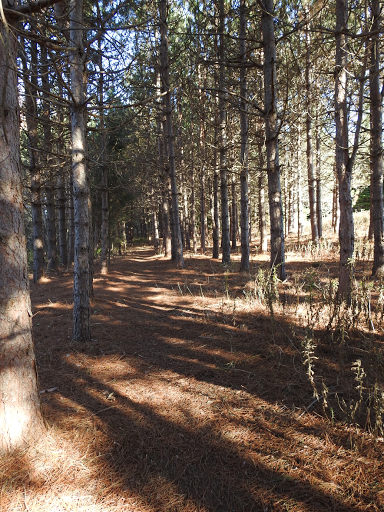 or tamarack needles. Everywhere there was something new to see. 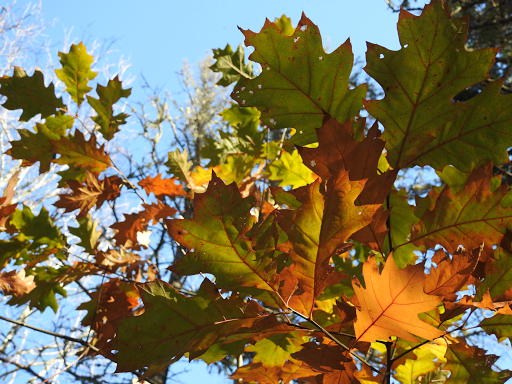 We stopped often to observe our surroundings as the trail followed a slight incline to an opening of a farmer's field. 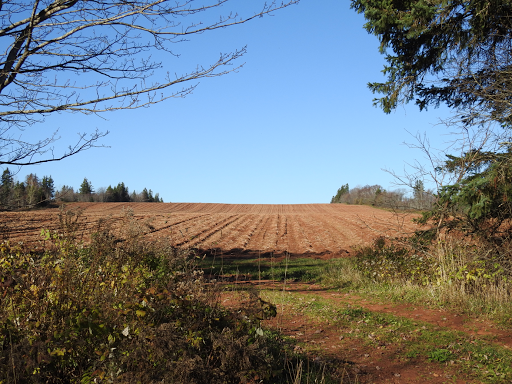 Then we crossed the Dunk River 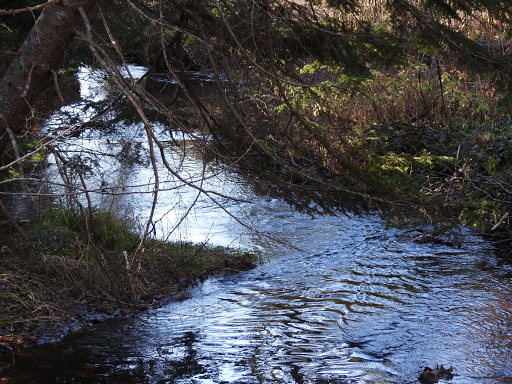 and onto The Confederation Trail which led to another opening of the hiking trail. Several of the trees in this area had burrs, 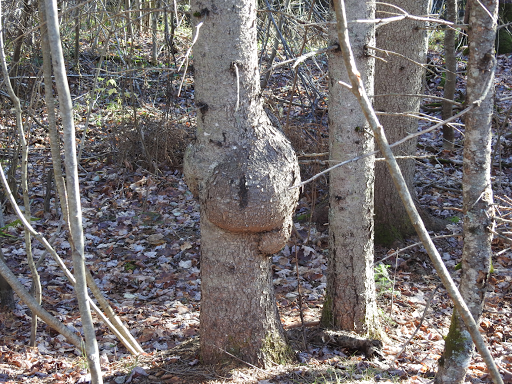 rounded growths on the trunks of the trees. Burrs, filled with knots, are formed when trees are stressed. They reminded us of the arthritic knobs on our fingers, but that's our age talking.
Before long we were back at the entrance to the trail. We had lunch across the road in a field, under a clear blue sky. Hiking through a forest on Prince Edward Island is not a common occurrence for us but we will do more of it.
Eleven degrees Celcius or fifty-two degrees Fahrenheit in early November was memorable in itself. The hike was a bonus feast for the senses.
Posted by Marie Smith at 04:19
Email ThisBlogThis!Share to TwitterShare to FacebookShare to Pinterest
Labels: Breadalbane, Dunk River, hiking trail, lateral roots, oak tree, Prince Edward Island

Lovely indeed. We have plenty of trees with shallow roots that blow over in high winds, especially after a lot of rain. It sounds a lot like some of our lowland hikes. Thanks for sharing. :-)

Thanks for taking me on your walk. I needed that.

What a glorious place for a walk and picnic. And sun!

No better way to spend a November day than in the glorious woods of PEI! Loved all your pictures, and that red dirt in the farm field makes me remember the red stains on our clothing growing up, lol! Thanks for sharing these delightful pictures of the island :)

It looks absolutely wonderful. Recently I came across the term 'forest bathing' and it seems that this is just what you did. And the Japanese (who coined the term) believe that it has huge psychological and health benefits. Which I wouldn't argue.

Beautiful trail. I like the light in your photos. The ferns are lovely!

“Trees are poems that the earth writes upon the sky.”
― Kahlil Gibran, Sand and Foam

I am learning and seeing so much of Prince Edward Island, some of it reminds me of England and other parts look completely empty. Sarah x

It is a beautiful area. We don't have mountains here, Jan.

Glad you came along, SS.

It was a great day, Celia.

SUI, the dirt stains everything. I've always thought that our sneakers rust!

I think the Japanese are right about forest bathing, EC.

It is a great trail with so much to absorb, Barb.

How true, John. They are among my favourite poems.

I see similarity with parts of England too, DbtS.

Beautiful pictures, Marie! I love ferns. I also like to walk in pine forests during the winter...they smell so nice and the greenery is a welcome sight! Andrea

What a beautiful trail! The weather looks gorgeous.
I saw the first photo of the cows laying down....and I thought of an old expression that Mama (and Grandmamma used to say, "The fish won't bite if the cows are laying down."
Made me smile.
Love to you,
Jackie

We don't have pine forests as such but there is lots of pine on the island, Andrea. I love pine on the mantle at Christmas. It is beautiful and smells wonderful.

I've never heard that particular saying, Jackie. Thank you for passing it on...

So nice to read we're both enjoying unseasonably warm temps - no coats and sunshine! Such a lovely place to walk and I find where there are exposed roots as you encountered a walking stick is helpful. There's usually lots to choose from in a forest. :-)

Walking sticks are a great idea, Judith. The physiotherapist has mentioned them to me several times. If we continue hiking, I will get them. I am fine on the trails and boardwalks which we often frequent.