A few months ago, my husband's uncle, Richard Mercer, died. Dick was a Canadian Army veteran. In 1950, at the age of twenty, he left his home in Corner Brook, Newfoundland and joined the Canadian military. 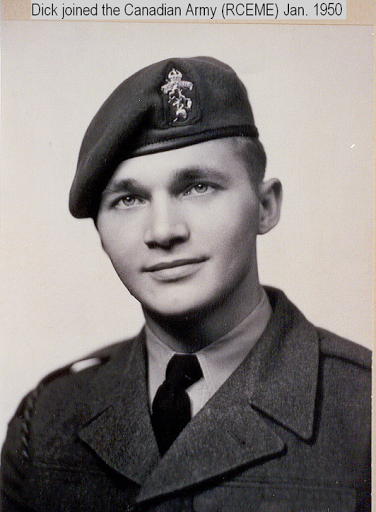 Two years later, he was fighting in the Korean War, for a time dug into the side of a mountain during the year he was there. This young man made the military his career and served in a variety of locations, including Cyprus, as a peacekeeper. 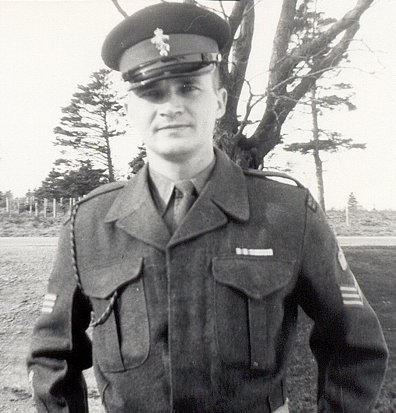 That soldier remembered and every year, he participated in the ceremonies of Remembrance on November 11th. While many of us pause to recall the sacrifice of so many, he had specific memories of some who paid the supreme sacrifice. Besides the ultimate cost to some, this man knew the cost of survival as well and what military personnel continue to sacrifice for this country. 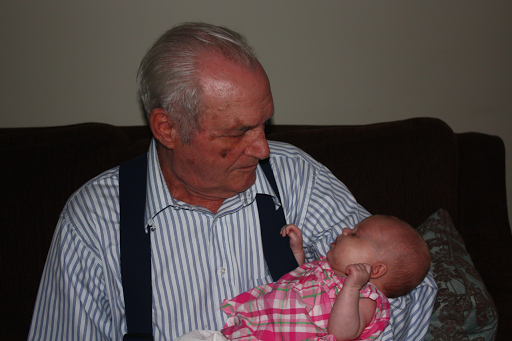 Uncle Dick and great grand niece Sylvie
Richard (Dick) Mercer, though you are gone, we remember you and are thankful for your service to Canada.
We will remember them.
Posted by Marie Smith at 04:46

Wonderful photos and lovely remembrance of a good man.

Nice post about Dick Mercer. Our veterans deserve to be honoured and remembered. What a handsome young man he was. And I love all the washing flapping on the line in the first pic!

Thank you for this lovely remembrance of a fine man. I appreciate having been introduced to him. Blessings on this day honoring our veterans.

What a lovely tribute to your Uncle Dick, Marie. So many wonderful military men and women are gone but never forgotten.

A lovely remembrance. They did so much for us. Never Forget!

Thank you Richard Mercer for your service to your country.
Even though you are no longer with us, what you did for your country will never be forgotten.
I thank each and every veteran today....and always.
Jackie

Thank you.
This is beautiful. And a tribute to a beautiful man.

Great memories of someone dear to you who served his country

He is missed for sure, Connie.

Our vets deserve the best we have, Shammickite!

Blessings to you too Jan.

We keep their memories alive, Ginnie!

We won't, SS and we will teach the children too.

Each vet deserves our gratitude but also the services each needs as well. We will never forget them, Jackie.

Uncle Dick gave a lifetime of service. He did well! EC.

He served for a lifetime, Cathy. He did well.

It's nice and effective to make it personal like this.

When he was younger, his mouth ha a wonderful little smile in the corners. Thanks so much for posting this.

I like the personal stories too. It is more real I think.

You're welcome. Dick had a great smile.

You must be very proud of your Dad, Andrea.

Thanks for the blog on my husband (of which I only heard about today from a family member).... I especially like the second picture that I took, in front of my family home in Port Maitland NS...in the late 1950's. During the Remembrance Day service at our Legion, here in Osgoode, two of his granddaughters, Julia & Elisha laid a wreath in his memory. Yes, he is missed ~ every day

How wonderful that the girls could lay a wreath in their grandfather's memory, Doris. We think of him often!