During a recent visit to Chelton on the south shore of Prince Edward Island, the beach was awash with seaweed. 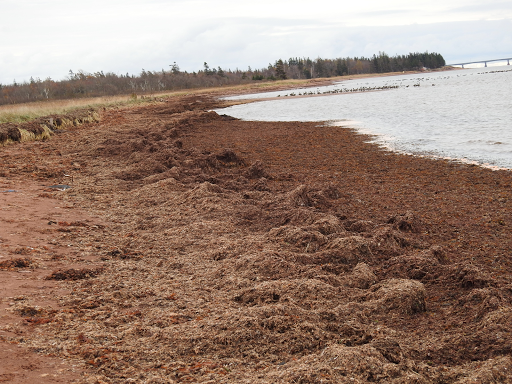 My husband and I are accustomed to seaweed on the beaches here, but the amount on this beach was exceptional, probably due to a number of storms the past few weeks. Deep troughs and crest-like waves of algae covered the beach. 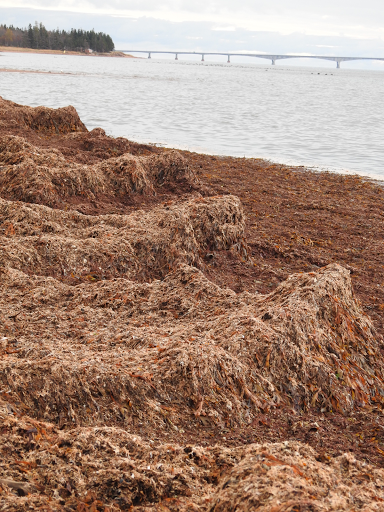 Areas where the seaweed was spread more thinly required a closer look.
The various types of seaweed are remarkable in colour and design. Some have air bladders for floating in the ocean; 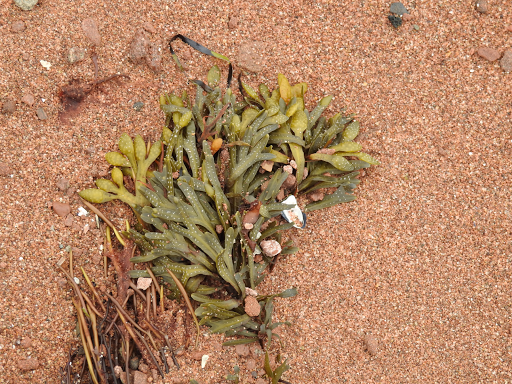 others are like filaments which wave in the water. 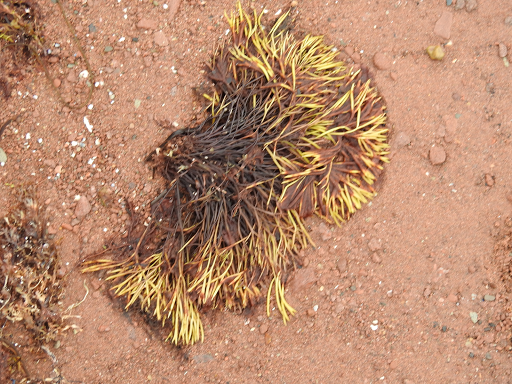 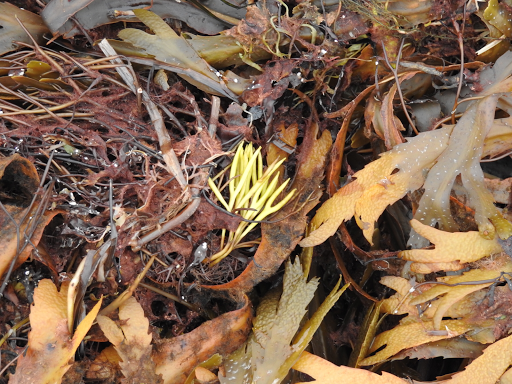 Some are long and wide, 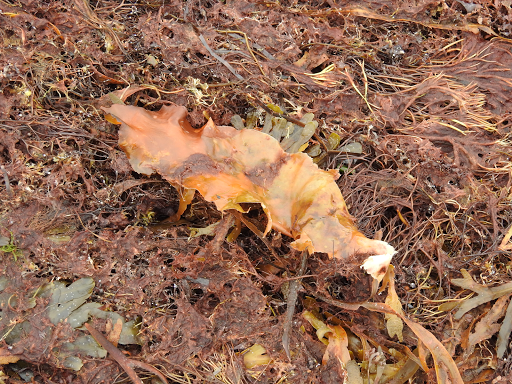 while small white seaweed is an unusual sight! 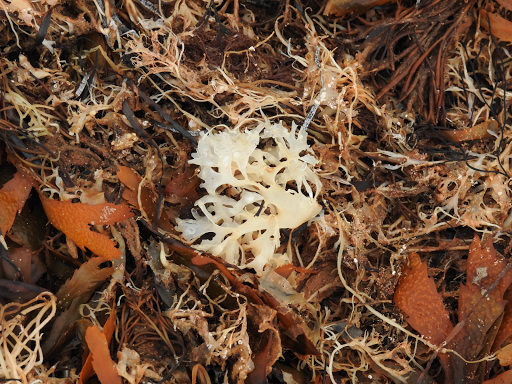 Each is beautiful, unique. 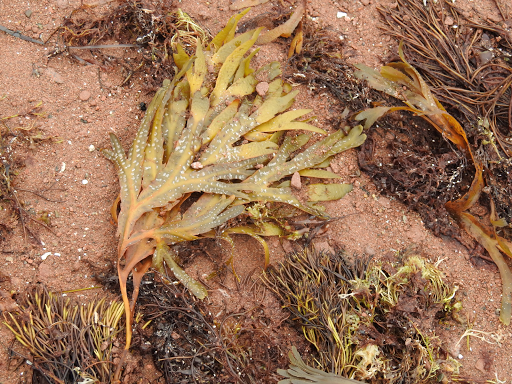 The colours of the beach 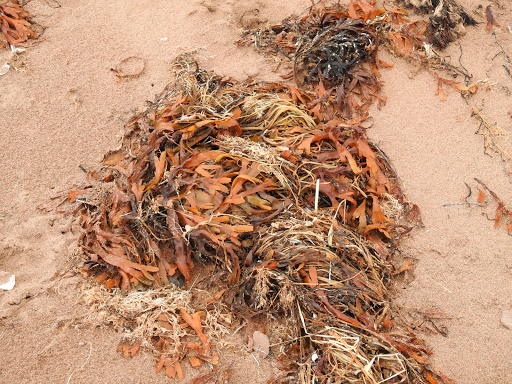 mirrored the colours of the trees that day as well. 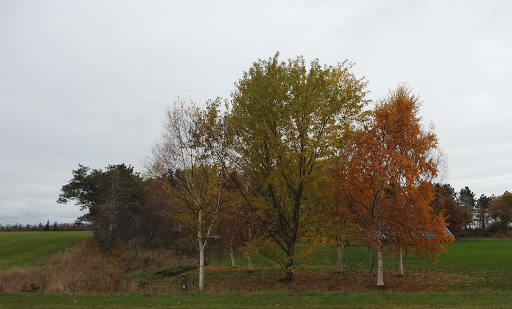 Marilyn at http://mountaintopspice.blogspot.ca/  grew up in Prince Edward Island. On one of my recent posts she mentioned how her father used seaweed in the garden and banked it against the house in the fall as insulation. I had never seen seaweed used that way until we visited Bedeque on our way to Chelton. What a great way to reuse a natural product. 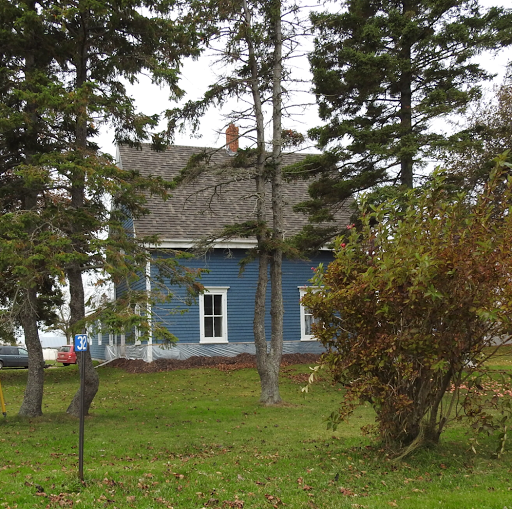 Seaweed is a beautiful part of sea life which people use in a variety of ways. We recently purchased some dulse to try for its nutrient rich properties. But that's another story.
Posted by Marie Smith at 03:36

Seaweed also has plenty of salt from the sea, and that discourages slugs. One of our community gardeners uses it in his garden. I like that picture showing its use as insulation around the house. Pretty neat! :-)

Gee, I thought that seaweed was just seaweed; I am surprised by the variety.

Tried dulce once as a kid and wasn't impressed, but it would be interesting to taste it again.

Thinking of rinsing it in fresh water and adding as compost to my garden.

I love dry seaweed in a green salad. I have not had it in so many years. Never it used as insulation on side of houses, that is interesting.

Wow, that's quite a crop of seaweed. When I lived on the coast we used it for the gardens and in the kitchen too.

My aunt and uncle, who lived on Cape Breton, also used to gather kelp for the garden.

Seaweed is full of wonders, isn't it! How interesting that after I mentioned the seaweed being used to bank our home, that you saw someone doing it! I have never ate dulce either! Have a lovely weekend :)

The natural world is amazing isn't it? So much beauty, so many practical applications. Seaweed as food I knew, and in the garden. Insulation is a new twist though.

Get's a little smelly too.

I have some seaweed for the garden this year too.

Algae are beautiful i. Their own seaweedy way!

Not my favourite taste but will have some daily!

Great idea, Tabor. My grandfaher used it all the time in his garden and he great great crops.

I must try the dulce in a salad! I am not fond of the taste however.

It was the most I had ever seen piled on a beach, Celia.

It is very common to use the kelp in the gardens in Atlantic Canada, John.

Have a great weekend, SUI.

I couldn't believe I was fortunate enough to see that house with the seaweed around it. I thought of you immediately.

It is an amazing new twist for me too. I am so glad SUI mentioned it.

It does. Surprisingly, it wasn't smelly that day. We even had our lunch on the beach.

Fascinating information and another example of using one of Mother Nature's gifts. Thanks for sharing.

Ocean plants that I rarely see here in my land-locked state of CO are quite intricate and lovely. I actually bought 2 types of seaweed last week to flavor my Miso soup, as suggested by a blog friend from Japan.

We could so easily live in harmony with nature if we made it a priority!

I hope you like it better than I do, Barbara. I will stick with it however!

Hi Marie! (I'm back to blogging) I am catching up on your blog today. That is pretty neat about seaweed. (for insulation). I know Costco here sells it dried for a nutritious snack! Andrea

Hope you like it better than I do, Andrea.

My dad never used it as insulation but definitely dug it into his 2 acres of strawberries!

Quite the interesting mixture of seaweeds!

It is interesting to see those variety ones. We have many kinds of see weeds cultivated from northern Japan to southern Japan island. See weeds are always kept in my refrigerator. Delicious and good for health.

Tons of it covered Seven Mile Beach that day, FG.

I have enjoyed everything I have eaten at Japanese restaurants, Tomoko. I am learning to use it at home, though it is taking some getting used to.

That does look a huge amount of seaweed and such varieties too! I have never heard of insulating a house with it either! We used to bring it home and use as a fertilizer and soil improver. Sarah x

It is versatile stuff for sure, Sarah.