Shade along the Confederation Trail, Prince Edward Island, prevents the snow from melting on the old rail bed. 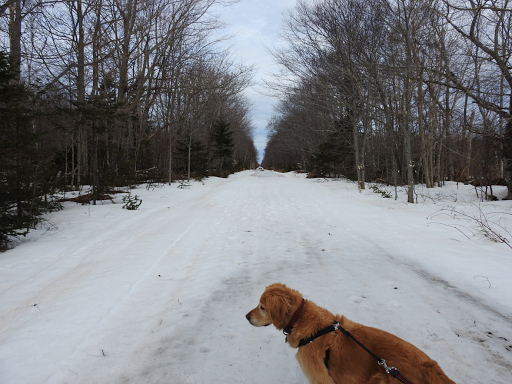 While the fields beyond the greenbelt are bare, 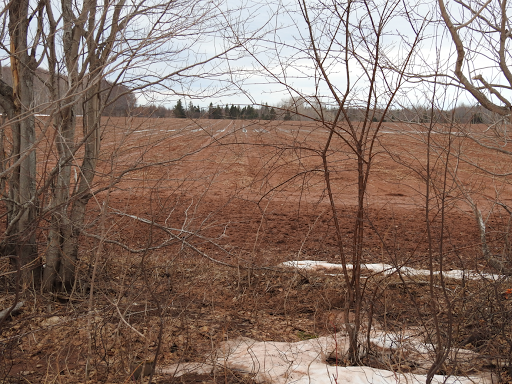 areas of deep drifted snow on the trail are crusted and crunchy under foot. 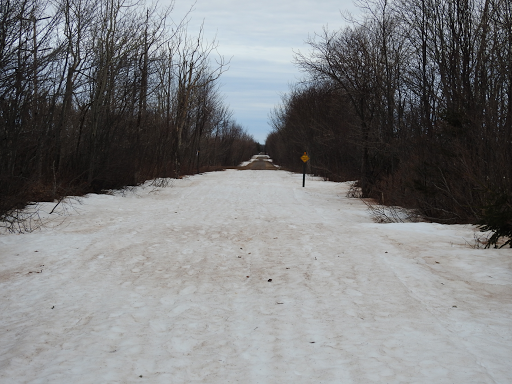 Georgie, the golden grand-dog is delighted to be out for a run. 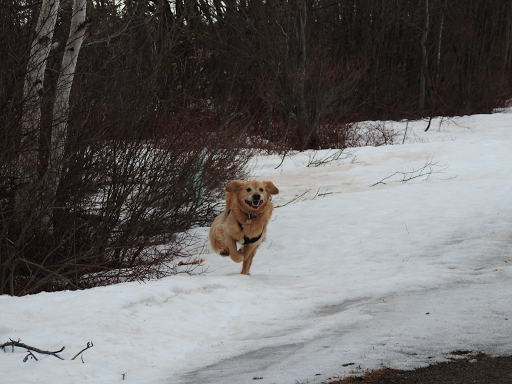 The snow slows us down as we walk along, giving us time to observe the wind damage from the past winter. There is a lot of damage as trees and branches have fallen the last several months though none on the trail itself. 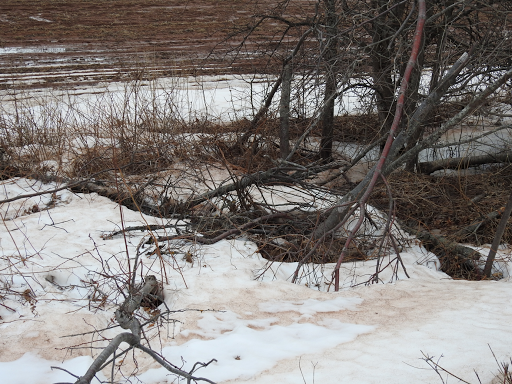 I am always surprised by the determination and resilience of trees here. Hydro lines run along part of the trail and trees in that area are trimmed periodically to ensure they don't interfere with the lines. Still the trees grow, sending up thin branches into the light. It is hard to hold a good tree back. 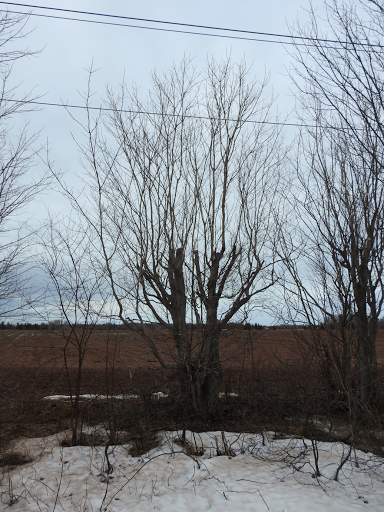 Some of the fields were seeded last autumn to prevent erosion. 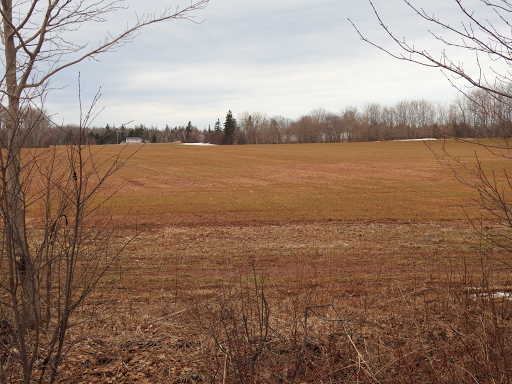 Those left unseeded are muddy this spring. One on the lower side of the trail has a pool of water along the tree line. Before long, the water will soak into the soil as it thaws. 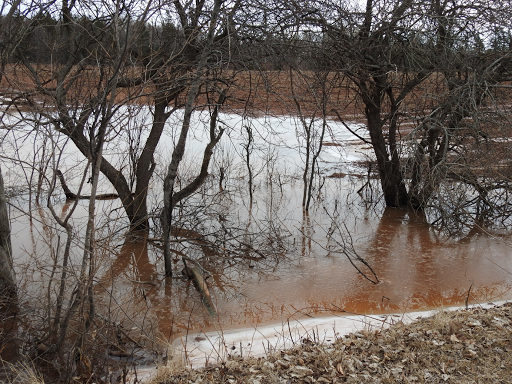 The geese have been back since the first of spring and we found one of their haunts that day. A field, about mid way between roads which intersect the trail, away from any houses, was covered with hundreds of geese. 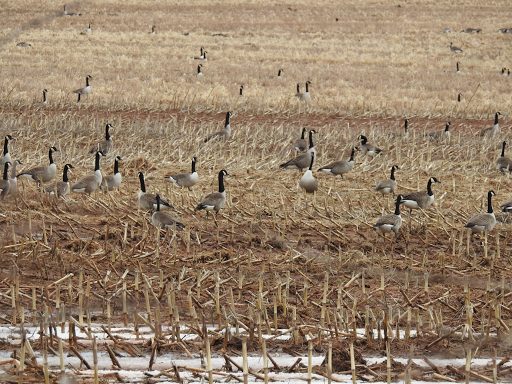 Georgie was quiet but something spooked them and off they went, 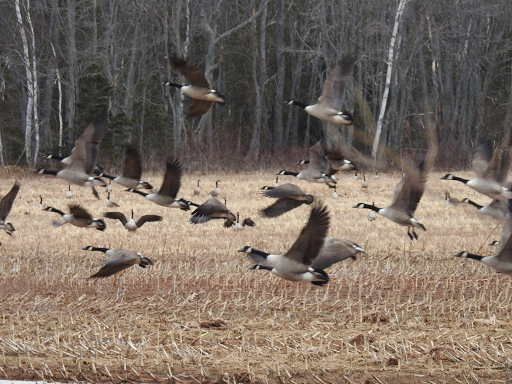 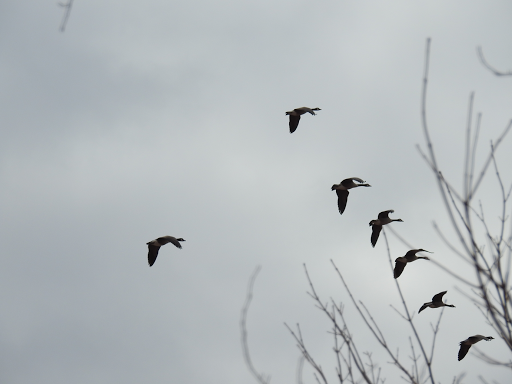 The birches stand out against the gray and earthy tones this time of year. 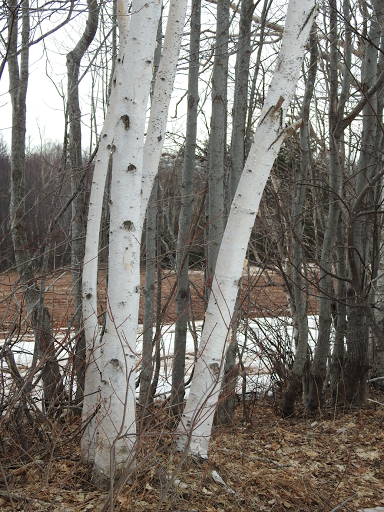 They are always a favourite. 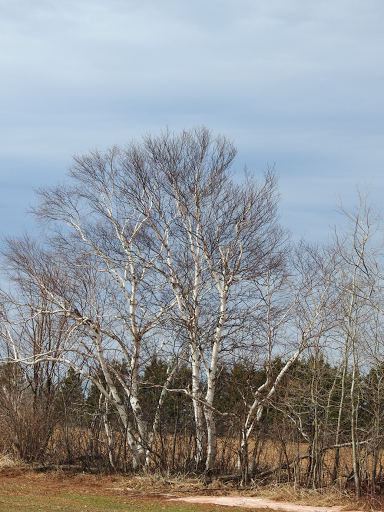 April on the trail highlights the soil, the trees and animal life, such as the geese, amid the vestiges of winter.

Signs of winter still hanging on in your part of the world, Marie. I love that picture of the grand-dog smiling while running. Thanks for all the great pictures. :-)

Gorgeous nature!! Me and my husband we love to look at the geese at this time of the year. Yesterday he told me that he thinks the Canadian geese is one of the most beautiful creature. I agreed with him. A lady from church said the farmers are not always so happy with them because "they take away the seeds in the fields." If I was a farmer I would still have them around and don't mind them taking away a few seeds..:) These are much loved happy dogs! Birch trees are beautiful!

According to the wildlife writer George Monbiot the reason that trees are so resistant is.....elephants! Go back several thousand years and elephants and mammoths roamed much of the world. A herd of them could do enormous damage to a forest. Fortunately though, some trees developed the knack of always growing back no matter what was done to them. In time these were the trees that survived and, although the elephants have gone, the trees have never lost the ability to regenerate.

Love the running pup and the trees. Excellent shots. Great to see.

you still have a lot of snow in those areas. the birch trees are beautiful - and i happen to love the geese but they sure do make a big mess around here!!!

I hope winter will start to fade soon. What a beautiful countryside.

It's my goal to get a great photo of the geese in flight, Debra. No there yet but the best so far.

Georgie was funny to watch, Jan. She ran so hard at the beginning, by the end, she was walking between us, tired out. I think she's smiling too.

I guess if I was a farmer I wouldn't be thrilled about their theft either. I know the can leave a mess in public areas too. The fascinate me nonetheless.

Makesperfect sense John. Thanks for the info. Blame the elephants.

I love birches, HW. I am drawn to them always.

I imagine they do. Debbie. They are huge! I probably wouldn't want them in the back yard.

This is spring for us Mage. We are happy with it so far as it's slowly warming up.

A wonderful collection of photos. I really like the one Georgie is running through the snow, lots of energy to release, I'm sure. The image of the geese taking off in flight is awesome.

Thanks for visiting, Bill. I will follow your blog.

Wow, wow and wow.
Love the filigree of silver birch branches against the sky. And the flying geese. And Georgie.
Megathanks.

We walked most of our short trail on Sunday but had to stop where the snow remained and was icy. On Monday, I was able to walk it all although there was a bit of snow remaining.

Those were my favourite photos too, EC. Thank you.

We have snow on the trail still, but itis going, AC. Isn't it great to get on the trails again though?

Once I saw the birches, I was in heaven there, Marie. What a precious dog to share it all with!

I always love seeing a dog enjoying itself. I love wild animals, but dogs are my favorite.

Lovely photos of the geese flying off! So glad you have such a blue sky and those towering white birches are
gorgeous,Marie.

I love birches Ginnie. The dog is precious and we're lucky she visits with us periodically.

I love dogs too. They make life more interesting, Ratty.

I have this desire to get a great picture of geese taking off or landing, Tomoko. I will try again this year.

I was hoping not to see more pictures of snow!

We have some left, FG. It's cold this week!

We have much in common, HW.

kind of contemplative post!
loved the all speaking for silence photos.
loved the running Georgie !
Bare branches of trees created a lonely autumnal effect throughout .
How amazing to have so much Geese around,loved their flying shot.

Thank you for visiting, Baili