The cliffs of North Cape

Our walk along the coastal portion of the Black Marsh Trail of North Cape gives a view of the cliffs in the shadow of the wind turbines. 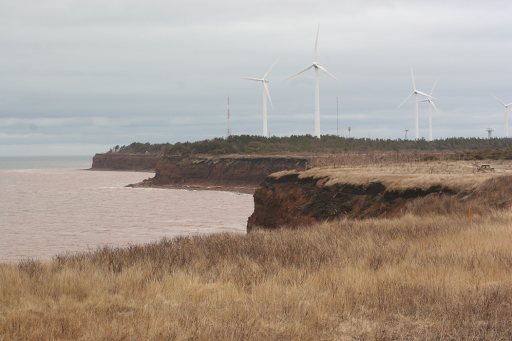 The cliffs are ten to fifteen meters above sea level and red due to the coating of hematite, iron oxide, on the granules in the stone. 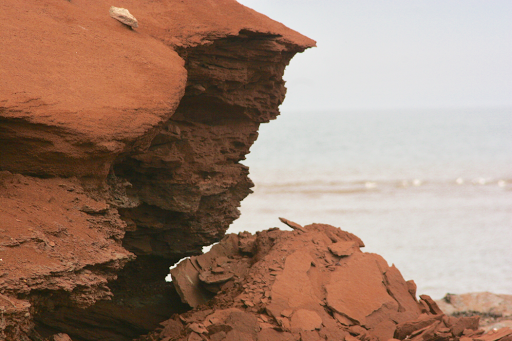 The erosion of Appalachian Mountains is the source of this sandstone. Water carried the sand, silt and rocks from the Appalachians into the Maritime Basin three hundred million years ago where it accumulated, hardened and became Prince Edward Island and parts of the other Atlantic provinces of Canada. The cliffs have a conglomerate of pebbles held together by natural cement, siltstone and the sandstone. 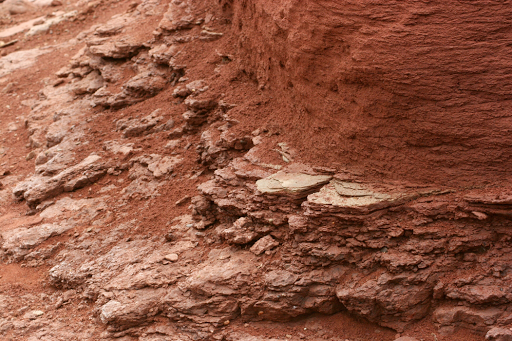 This redbed, as it is known locally, is very susceptible to erosion. It is curious that erosion was part of the process which formed PEI and erosion is wearing it away again. 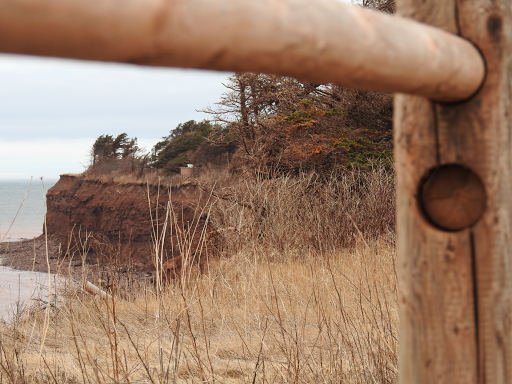 Sea stacks are common around the island and there is one visible along the trail. 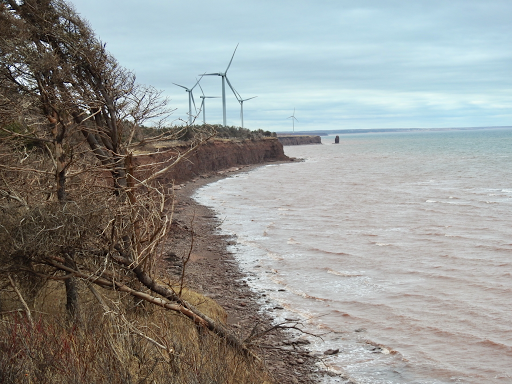 Called Elephant Rock, we see it in the distance as we walk along the coastline. Erosion has changed it too.

After the winter, fencing along the top of the cliffs is hanging over the edge in two locations. 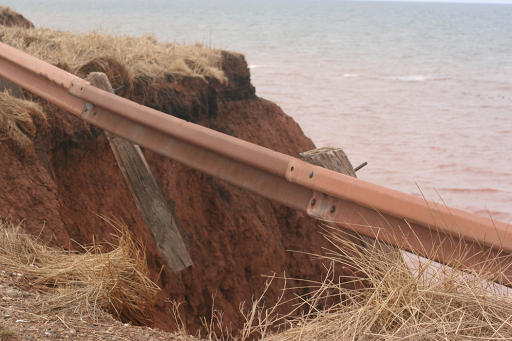 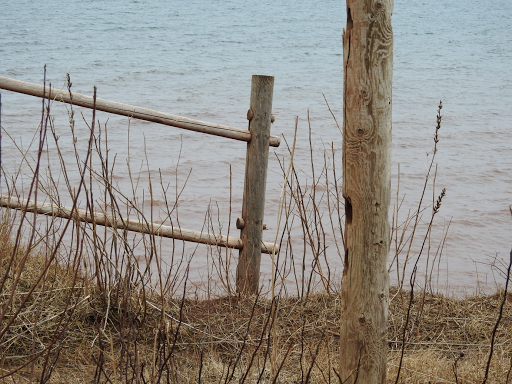 The trail has been redirected in several places already. 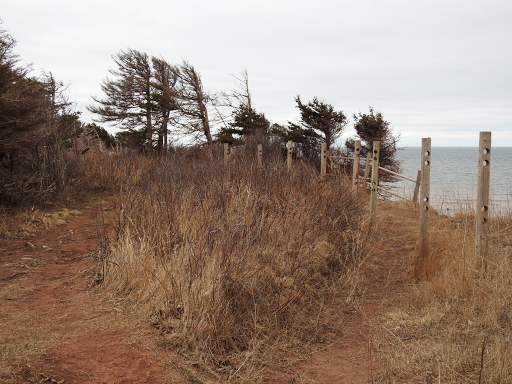 Work will have to be done on the trail before tourist season begins, so we are careful where we step today. 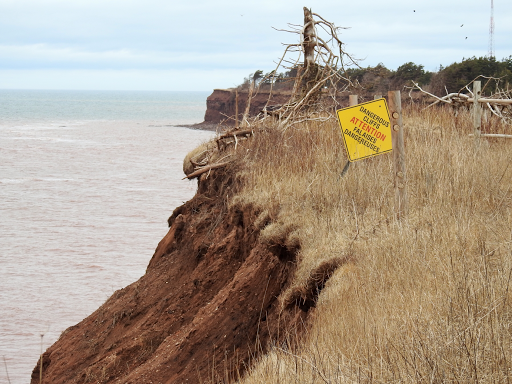 At the end of the boardwalk, by Elephant Rock, 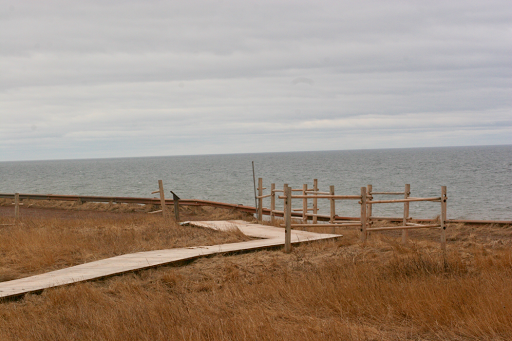 a road goes down to the shoreline. Irish moss harvesters will access the shoreline to collect the red algae for carrageenan, used commercially for its gelling and thickening properties. The road needs some repairs as well. We do not venture there today. 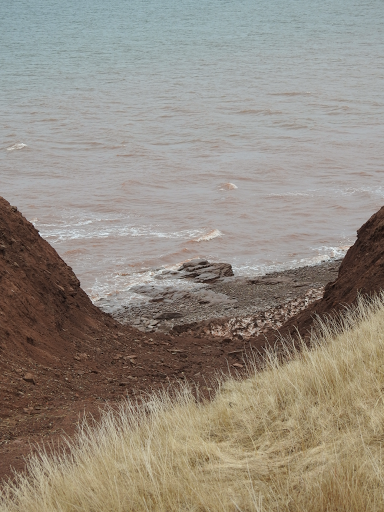 It is cold today, unlike our visit to the Cape two days previously. We dressed for the weather however and even had a picnic, warming ourselves with the hot tea. We planned our next adventure as we watched the birds gliding on the breeze. 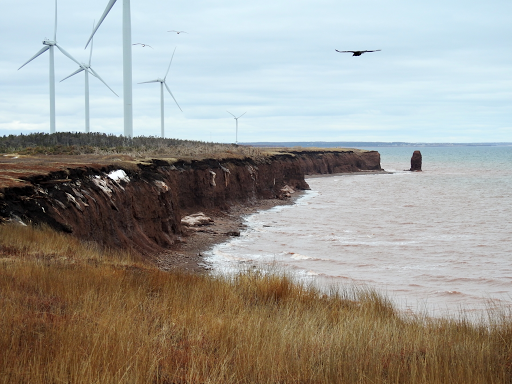 Good Morning! Very interesting information and I enjoyed the photos. Sad about the erosion. I'm glad you were dressed for the cooler weather and that you enjoyed a picnic anyway! The hot tea sounds delicious. Wishing you a delightful Monday.

I would never have guessed why Elephant Rock had that name without the earlier picture. That is a distressing amount of erosion in less than a decade. But your home island is very beautiful nevertheless. Thanks for sharing your walk with me. :-)

I never knew PEI's connection to the Appalachian Mountains before -- interesting!

The brief geology lesson was a rather nice addition.

Interesting pictures and information. At the present rate of erosion that particular elephant is not long for this world!

The power of erosion is amazing. The Appalachian connection is new to me too. Interesting stuff.

it looks like a beautiful spot, with such natural elements. one would have to be very careful walking there!! pretty reds!!

We have the same sort of erosion in Hawaii too. I can see why it's called Elephant Rock. I'm glad that Hawaii is also harnessing wind energy like Canada is.

Excellent photos and some wonderful information. It is a very lovely place that has its issues but fortunately people will help it thrive. The erosion is sad.

A harsh, unforgiving, and truly beautiful spot. Thank you so much. Like DJan I am glad to see how Elephant Rock got its name.

It is harsh but beautiful, it's true!

The erosion makes me sad, Bill.

I wish we could harness enough energy from wind for the whole island, Kay.

Yes we do, Andrea.

The geology of this place makes it susceptible to erosion. With all the talk of climate change, it is scary, Celia.

Another form of extinction, John.

We were very careful where we walked, Debbie.

I love geology, but all science really, AC.

The island is the sediment from the Appalachians, Debra.

I am surprised it's called Elephant Rock still, Jan.

A cup of tea can fix many chills, Mildred.

That geology is really dramatic!

Hopefully your next adventure there will be warmer, Marie, and not like what it is today here in Europe, with some places getting snow! But the thought of three hundred million years ago totally blows the mind! We have a photographer friend who lives on PEI and often show images of the red stone and erosion. A tear and a smile for such a beautiful place that is bearing the brunt of...climate change?

My goodness, your island is eroding and it's sad to think that elephant rock may disappear altogether in the not so distant future.

It is dramatic for such a gentle place, Tabor.

I hope we've seen the last of the snow, Ginnie!

Climate change will speed up the naturally occurring erosion.

It is an endangered elephant, Judith.

What a lovely walk you took us on. Thank you. And yes, our cliffs are looking like yours.

I guess it's the same everywhere, Mage.

Enjoyed your pictures. Erosion is definitely a problem, and I enjoyed all the information you shared about the history of the Island.

What an interesting landscape!

The island has an interesting natural history for sure, Marilyn.

The trail at North Cape is a great place to visit, FG.