It's been cold with high winds and periods of snow this past week. The sun has been missing in action for what seems like ages. The first time she made an appearance, without the wind, we headed out, like escaped prisoners, delighted with our new-found freedom.

We drove to the Malpeque area on the north shore of the island to Cabot Beach and Darnley Basin, some of our favourite summer haunts. What was it like this time of year? My husband and I were eager to look around and take some photos. 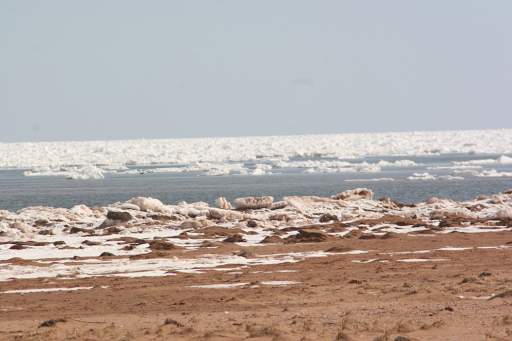 The area was deserted, with the exception of another photographer headed out to the beach as we were leaving. It was nice enough to have a picnic on the beach had we planned for it. Next time! 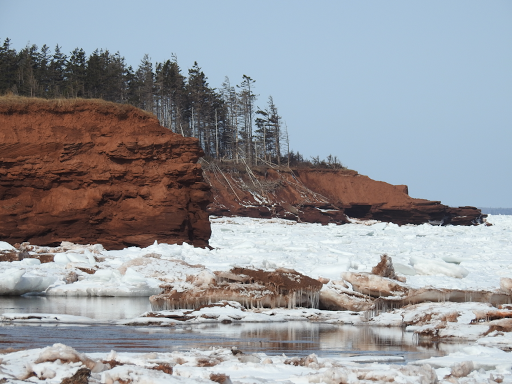 Our harbour at Summerside only has ice in the inner most part of the bay now. The high winds have blown much of the ice off shore. Meanwhile, here on the north coast, 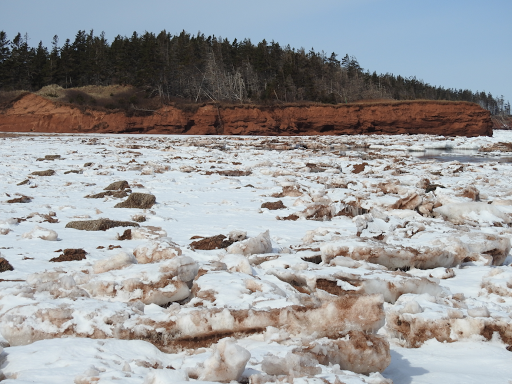 winds have thrust the ice onto the shoreline where it rests today, in all its icy glory. 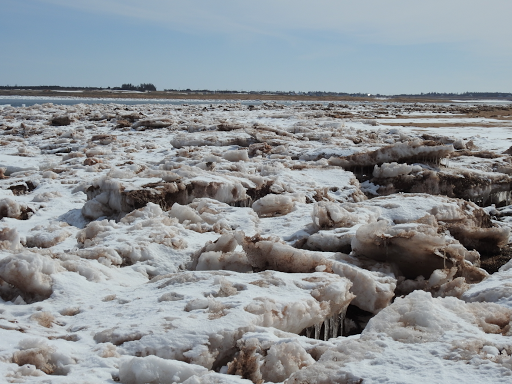 Near shore, the red sand has stained the ice, particles frozen in the water, or globs frozen into the surfaces. 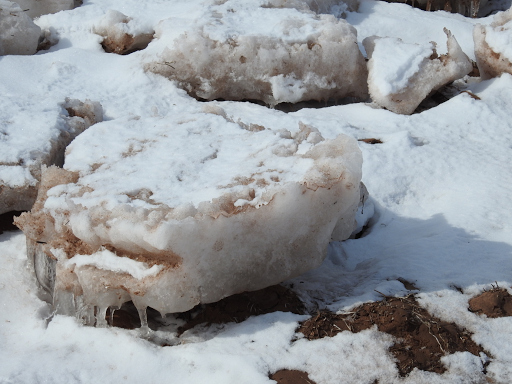 The red stains are evident in the icicles formed from the melt water. 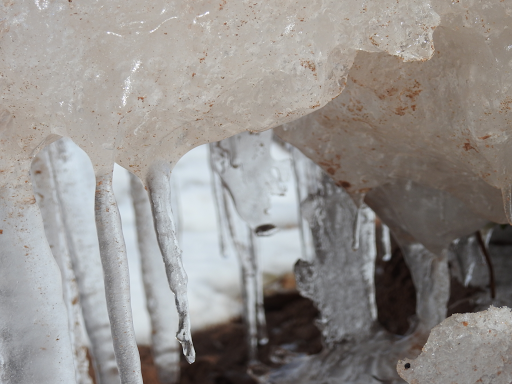 You can feel the cold emanating from the ice as you stand there.

Beyond the low tide mark, the ice was unstained, pristine. 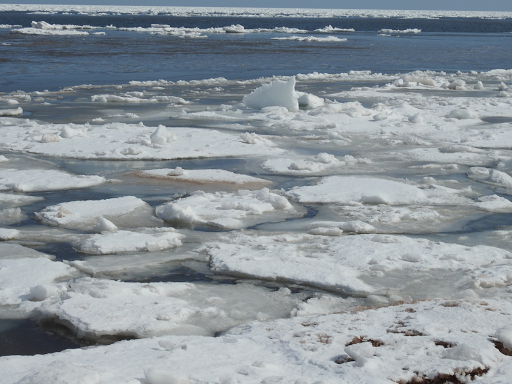 The air was fresh, the sun, warm on the face. Spring!

It sure doesn't look much like spring to me, with all that ice! But I'll take your word for it, and I look forward to seeing it as it evolves. :-)

I'm glad you had an opportunity to get out and about. I enjoyed your pics very much. Maybe you can have that picnic soon!

It was really nice here yesterday, almost 10° and sunny, so there were a few escaped prisoners around here. Great ice pics.

We have started watching the new Anne series. It's different that the 80s version, more dramatic but quite good. Of course, it is possible that Islanders are fed uop to the teeth with AofGG.

The photos look so good to me Marie, your cold weather is something I've never experienced. I thought it might be warming up a bit over there by now, aren't you into spring?

I was wondering if it creaked and groaned a bit too.
Very good stuff.

Harch, but so very beautiful.
I welcome spring too, but ours is much gentler than yours (as is winter). I hope you can get than picnic soon (with your camera too).

The sun was lovely, Jan. It was so nice to get out and not feel like you were being blown away!

Ispring reveals herself slowly here, PDP. We delight in a sunny, windless day.

No the ice is silent here, Mage.

Snow is all gone here, thank goodness. And your ice will be gone soon I hope.

With sunny days like today, it won't last long, Shammickite.

AC, I lost your comment somehow. Ann of GG is an institution here. Two musicals still run in Charlottetown and are excellent. People accept the Ann interest as part of tourism and island history I think.

awwww, a nice, entertaining story - your images are beautiful!!!

Looks cold just from your photos and I love those red cliffs. I wouldn't have thought about the icicles taking on a red tinge from the sand but it makes sense.

I guess we should expect this for where you are now at this time of the year, Marie, but it does amaze me. APRIL. I wonder if this is normal for you right now or if you're seeing the effects of climate change there over the years? The images are glorious, regardless, especially after being in Italy for almost two weeks where it was unseasonably warm/hot. I was so glad to come back to the the Netherlands and feel cold again. HA!

Erosion is a problem here, Ginnie. That is the greatest change we've seen but we've only been here since 2010. Every month is the warmest ever though. Scary! This island is so flat, we will be underwater with the rising sea levels.

Canada is warming faster than many countries because the perma frost is thawing and the snow is melting in the north, causing the tundra to release more carbon dioxide. The tundra needs snow and the Arctic Ocean needs ice to reflect the sun. The ice cover is disappearing too.

I am always surprised by your amazing photos with a deep sigh. We live on the same planet. Even though we face global warming that causes serious natural disasters all over the world,our planet is beautiful!

We live in a beautiful world. I hope it isn't too late to save our planet, Tomoko.

I agree with you, Marie!Our planet is ours.

Each must do her part!

Looks pretty wintry still to me!

I remember your views from there in the summer it looks so different with the ice and snow! Sarah x

It was icy but lovely too, FG.

It was so lovely to get back there, Sarah!