The first picnic of the year was long overdue. My husband and I waited patiently for the temperature to rise to 10 degrees C, 50 F, without much wind and the day finally arrived. We packed lunch and a thermos of tea, switchel to be exact, black unsweetened tea and winter gear in case the wind was blowing at the Cape. We were off.

We hadn't been to North Cape last year, so it was a good place to begin our picnic-hiking season this year. North Cape is at the north western tip of Prince County, Prince Edward Island, where the Gulf of St. Lawrence and the Northumberland Strait converge. In the distance, the coast of New Brunswick is the nearest point of land.

There is a wind farm at North Cape, 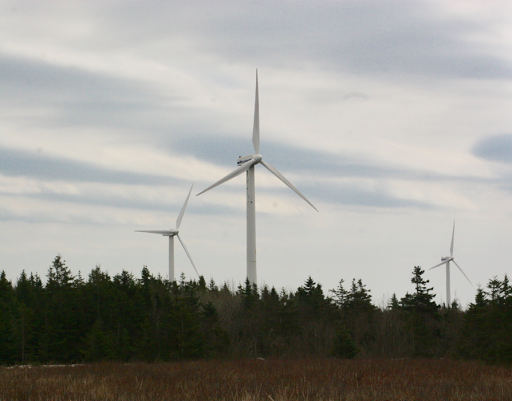 a research center and an interpretation center. 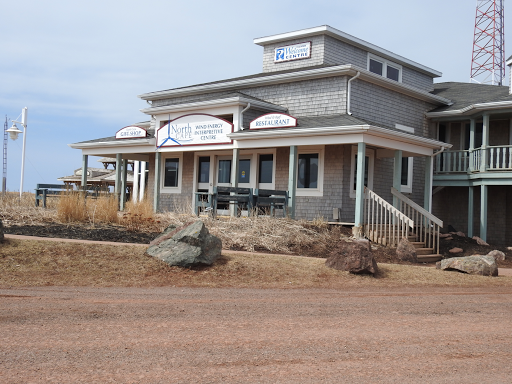 In season, a restaurant is an option but a picnic is always our first choice.

The cliff is five meters from our feet as we enjoy our lunch on a bench overlooking the Gulf of St. Lawrence. As we sit there, the erosion of the past winter is evident. 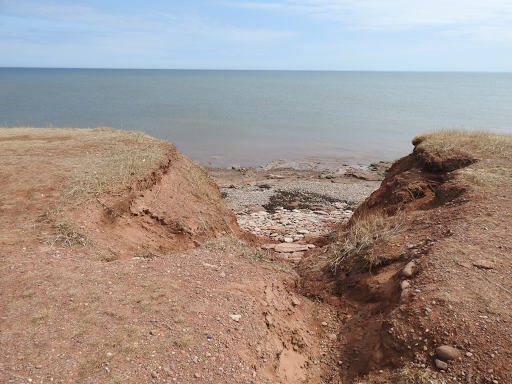 Boulders, tipped over the bank in some areas, appear to have prevented more damage in those areas. 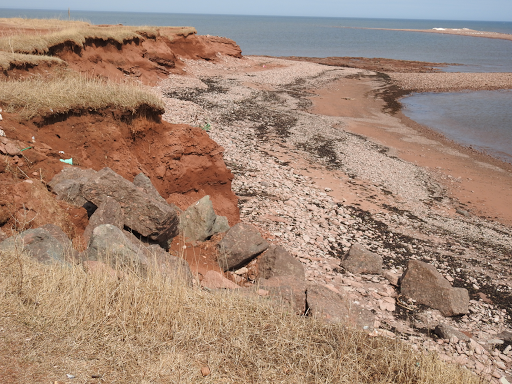 Looking along the edge of the cliff, the damage to the rest of the coastline is obvious! 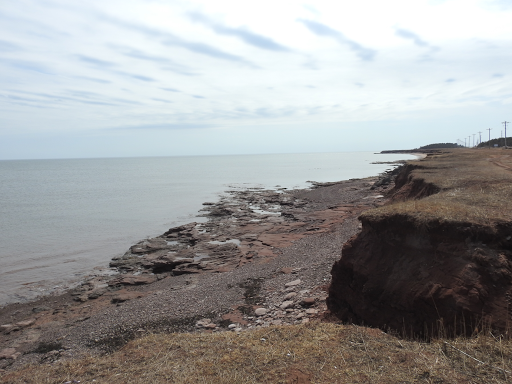 Red sandstone, which looks like sand, is exposed during low tide. 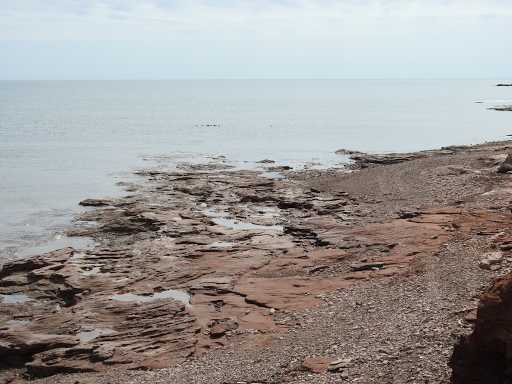 Off shore, a rock/sand bar appears to be a nesting place for sea gulls. In the distance, ducks bob in the water.

The lighthouse stands behind the Interpretation Center, unmanned now for generations. 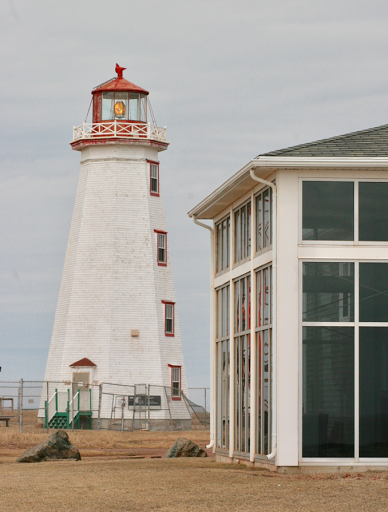 It was built in the 1860s and has been moved several times since, due to erosion of the coastline. It was last moved 400 feet in 1951, and now looks to be about 200 feet from the edge of the cliffs. 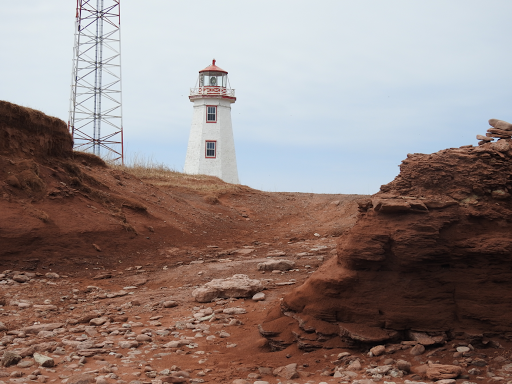 The air is clean and fresh. We are the only people in the area. Cars near the research center signal others unseen by us. It is peaceful but invigorating at the same time. No need for mitts and a hat but the winter coat is essential. We breathe deeply to take it all in and look forward to another great picnic-hiking season.

I agree with you: I always like to eat in the open air when I'm out for a walk, calling in at a pub or cafe always seems to disrupt the experience (as well as waste an enormous amount of good hiking time).

First picnic? Inside the car or outside? We may do one or t'other today as it goes up to 15.

I feel like I'm right there with you. I can even smell that invigorating air in my imagination, Marie! Thanks for the visit. :-)

What a lovely spot for a picnic. I love lighthouses. Did you know that we have 20 in North Carolina ... the first one was lit in 1789 ! If you come to visit I will take you to them.

I always enjoy your pictures so very much. Your landscape is very different from ours. So glad you enjoyed your picnic and time outdoors. The lighthouse is beautiful.

We went to North Cape a couple of years ago. Ate at the restaurant. Frankly, your picnic was probably a wise choice! LOL

Thank you so much for taking us along.
Beautiful area, though the erosion is troubling.

So true, John. There is nothing like eating outdoors whilst hiking.

Outside on a bench, AC. It was wonderful!

The air was so fresh, Jan. Just wonderful!

That was an early lighthouse, Ginnie! I love them too.

Blogging is great because we can see and learn about other parts of the world from the people who live there. I enjoy learning about your life, Mildred.

A picnic is always my first choice, Karen. The food you like, prepared the way you like. What could be better?

The erosion bothers me too, EC. I've decided to live in the moments I am there and enjoy what is, rather than what might be.

What wonderful photos. I love lighthouses, they are so unique and different from each other. We have the Moville-Greencastle shore walk right down the street from our house. It is 4km one way and there are some really beautiful places to stop along the way to have a bite to eat. We pack a lunch and are on our way.

Even looks like it is warming up there! We have some wind turbines in Pennsylvania. I think they are scary looking! Andrea

How wonderful to live near awalk that that one, Bill. You are very fortunate.

It is warming up here, Andrea.

I don't mind the turbines. I wish we had more of them.

I'm against them. For many reasons. One recent problem is they kill lots of bats, who eat bugs, and therefore cost the farmers millions of $$ in Pennsylvania alone for crop damage. We are coal rich here and most opt out of this wind energy.

I saw recently where Scotland produced enough electricity from wind energy to power the country. I wish we could produce enough to power this island.

I must be difficult for coal miners to lose jobs. I lived in a mining town where the mine closed. It was hard for the people. There aren't any easy answers.

Wow, The lighthouse had to move many times due to the erosion!
Every time I visit you I think how wide our world is!
I will have a blog break for a while. I look forward to visiting you again. Have a happy day.

Enjoy your blog break, Tomoko. Thanks for visiting.

we had our first picnic the other day and it was wonderful!! that's a beautiful lighthouse!!! happy easter!!

A picnic outdoors would always be our choice too Marie, so invigorating on a fresh day. Goodness the coastline really did suffer through your winter, fascinating to see. What a shame about the lighthouse, it looks so good, I hope they don't give up on it and let it eventually topple over the cliff!

The coastline was battered but the lighthoouse is OK for a time, PDP.

Excellent photos. What did you pack in the lunch part of the meal?

We had steak sandwiches on homemade bread with pickles, yogourt, and nuts. Delicious!