They take a beating in the winter. The sand dunes, our first line of defense against erosion of the beaches on Prince Edward Island, look battered after last winter.

We compared the dunes of Cabot Beach to photos we had from last summer and the difference was obvious. 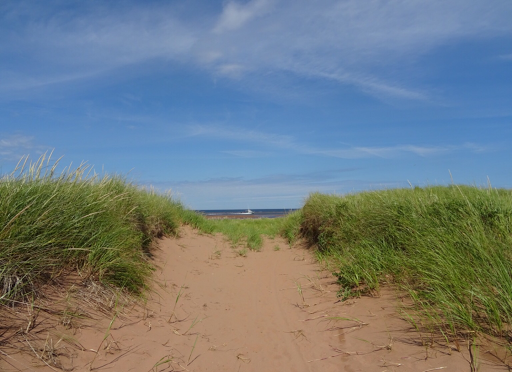 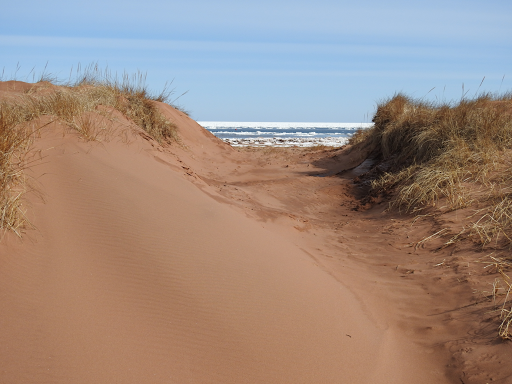 On the beach, the Marram grass is straw-like now compared to the verdant appearance of the upper part of the beach last summer. 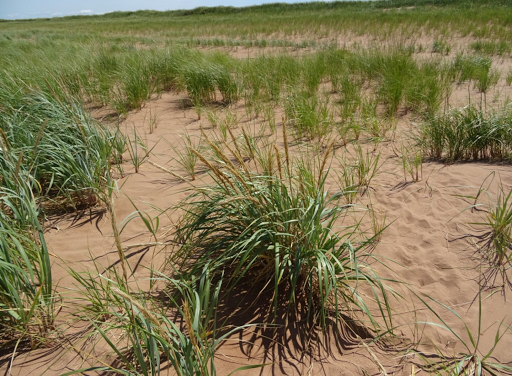 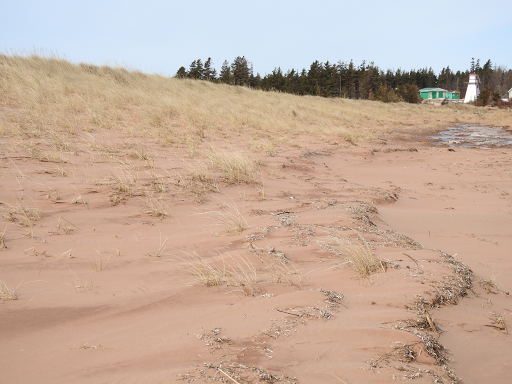 How long does it take the Marram grass to recover? When the ice disappears and the sun warms the air, do the new strands of Marram grow from the roots of the straw left from last year?
August 2016 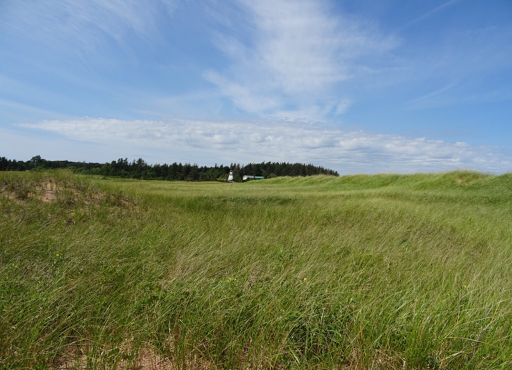 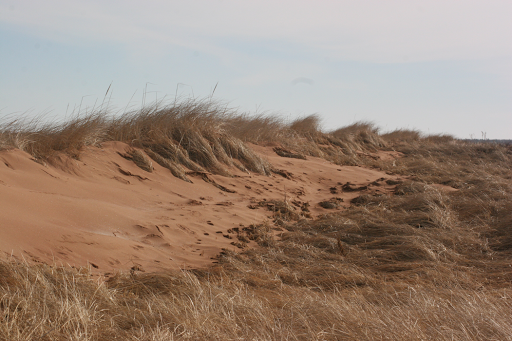 We will be curious to see the growth of the grass and what the area looks like in August.
Posted by Marie Smith at 04:26

That is amazing, in just a half year's time. I will be interested in seeing what they look like in August this year. Thanks for sharing this information. :-)

It is amazing how icy the water is compared to the dunes. Delaware always has beach erosion and is continuously replenishing the sand. Andrea

Wow, lost a chunk of sand there. Love seeing the changes. Looking forward to more, especially the grass recovery, hope it's good.

I hope that warmth and moisture DOES mean the grass returns. Quickly.

Thanks for stopping by and yes, it's oh so fun to try different things when baking and cooking. It's great fun. Might even make a second plate of them tonight.

What's for supper at your house?

It was devastated there, Jan. I hope it recovers fully!

We fortify some areas with rock here but the dunes are really important.

I hope it recovers, Celia.

We had our grandchildren with us for supper tonight, so we made a casserole with ground beef that they enjoy! My husband made cupcakes for dessert. They took the leftovers home.

I can't wait to see when the grass turns green and new grows in the barren places. We have to stay off the grass because we can damage the root system.

April showers bring May, er, no not flowers,.... marram grass.

WoW, the changes are remarkable. We rely heavily on our dunes here as well and they have taken quite the beating this past winter!!

I pray they do, Shammickite.

Do you have any photos of the area, Debbie? It would be interesting to compare them.

That's a good idea you have. Happy snapping.

I plan to follow the progress of the Marram grass, Mildred.

It was so great to be out in the sun without the high wind that day, AC. I will enjoy these excursions.

Beautiful pictures! It's interesting to see the comparisons.

It was an incredible sight to us, Danielle.

Your pictures certainly are testament to the changes taking place. It is almost eerie to see such concrete examples of change.

We are losing shoreline every year, Ginnie!

Every photo is interesting, and make me think that those grass have grown strong in the severe weather.
I agree with Barb.Happy weekend to you.

I hope you share the changes here as time goes by. That would be fun to see the differences. I like the comparisons you have here already.

It really is such a clear difference, Marie. One wonders how Mother Earth ever recovers from what wreaks havoc on her. God help us to figure it all out!

It will be interesting to watch what happens, Tomoko.

I hope it recovers to where it was last year, Ratty.

Left to her own devices, Mother Nature keeps all in balance. Ginnie, let's hope this beach can return to its previous state.

hi marie, i do...but not progressive like yours. ours are repaired pretty quickly now, since super storm sandy, the heavy equipment has been working on our beaches all winter. and we also just had a dune grass planting project. i couldn't go because of a prior commitment but the turn out was incredible. the people that live in this area, we love our beaches!!!

That all sounds yummy.

It is great to see the people respond like that, Debbie. We had a dune grass planting last year too. The environmental studies students do it.

That Marram grass is amazing the way it's roots go all the way down through the dune and hold it together!

It is an incredible plant, FG.

I hope the dunes recover this year, Baili.