Under the red maple

Time is of the essence. The temperatures are often seasonal now and before long the snow will fly. In November last year, when we had snow, it stayed. Now my husband and I are hiking as often as we can and enjoying our last picnics for the year.

Our most recent excursion was to a demonstration woodlot which has an interpretative trail west of our home. The noon day sun created its autumn shadows across the trail. Georgie, the golden grand-dog was off lead again as we were the only people in the area. The trail has natural wooded areas and mature plantations. The height of autumn colour was a perfect time to visit. We admired the golds, reds and yellows which surrounded us but some scenes were particularly striking.

The red oak leaves demanded attention whether on a single tree or in a group of trees along the trail. 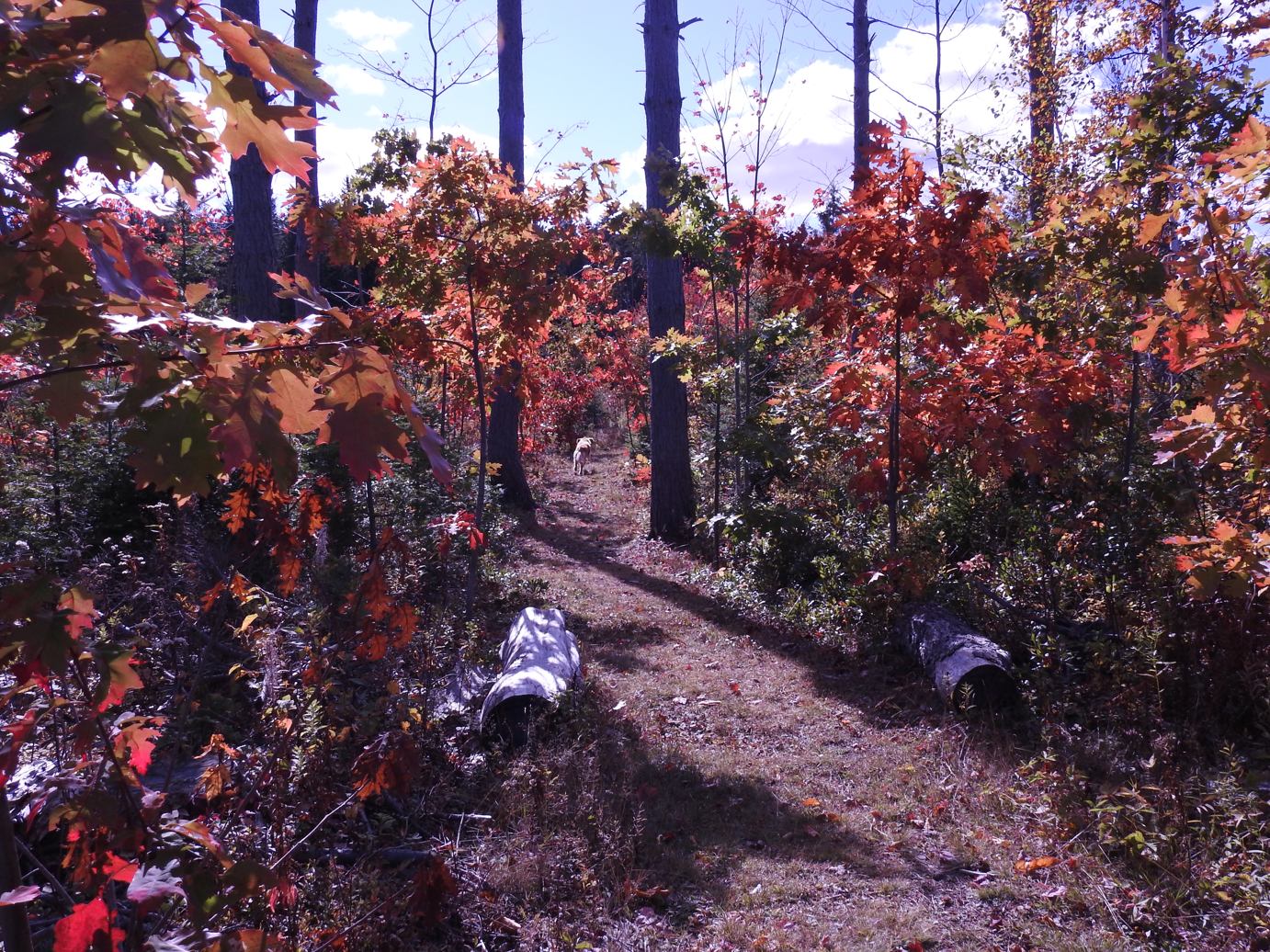 A huge tree stump had the question, “How old,” on a sign beside it. 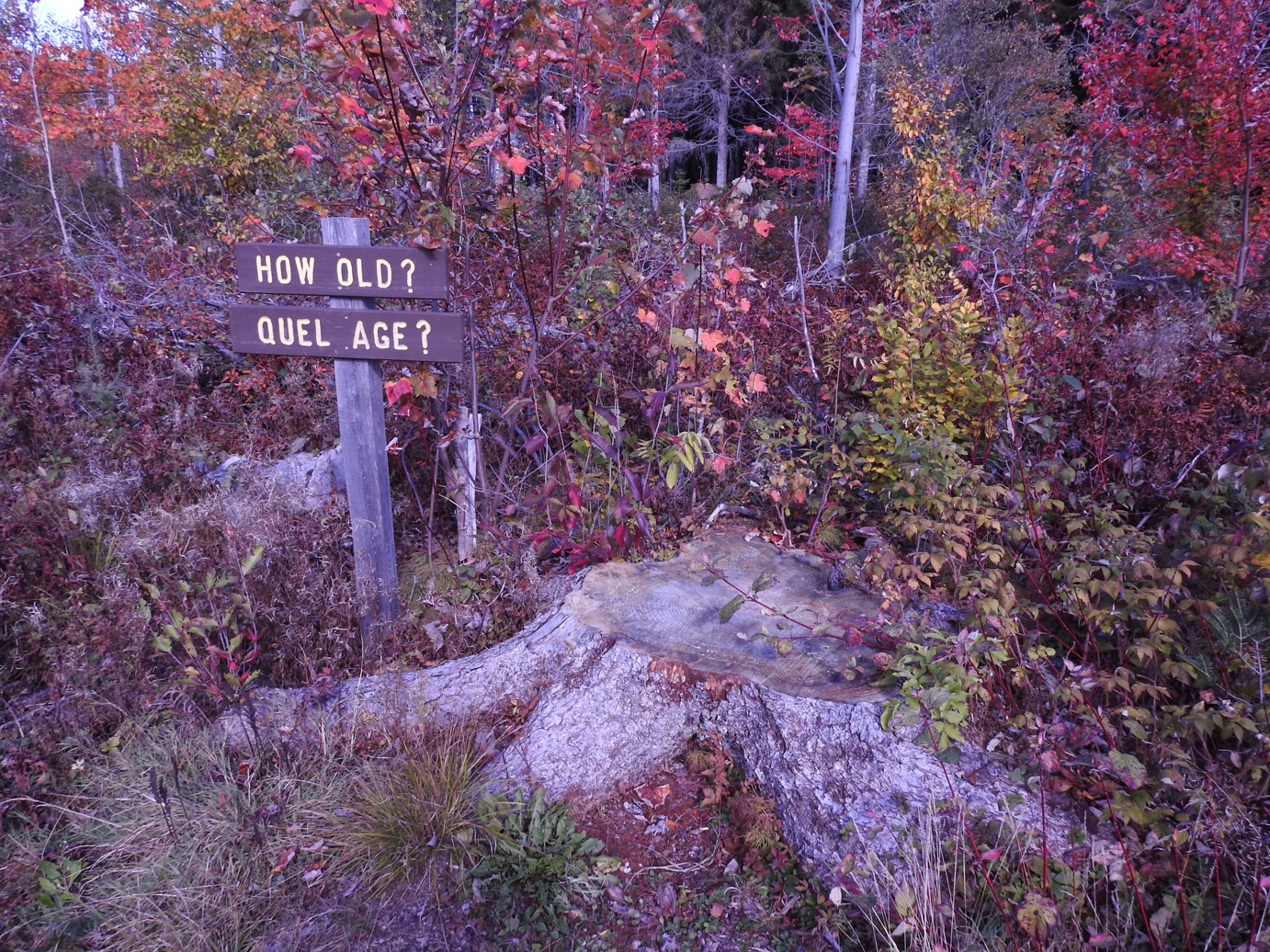 As we attempted to estimate the age of the tree, Georgie, not to be ignored, stood on the stump. We looked at each other and laughed, “Seven.”

Farther along, a stand of Norway spruce had an area with lots of cones on the forest floor. We had noticed seedless cones in some stands of Norway spruce but these were huge cones filled with seeds. While we examined them, another fell from the tree tops. Georgie was intrigued by this and checked out the cone. Meanwhile another fell near the last one; Georgie checked that one too. And on it went. 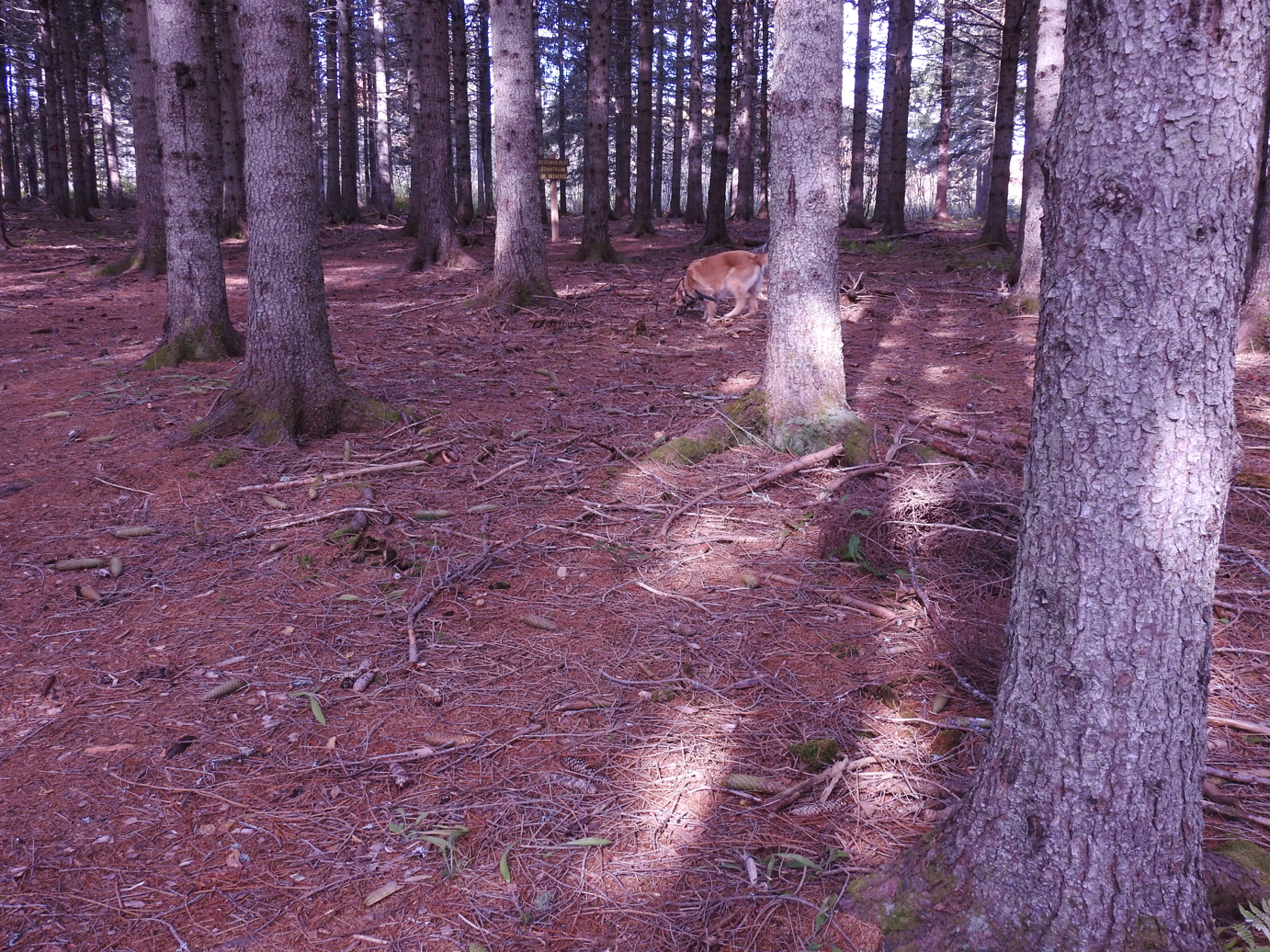 Squirrels, heard above but unseen in the tall spruce, were chewing through the stalks of the cones which fell to the forest floor. Seedless cones are visible in the lower right of the photo below too. 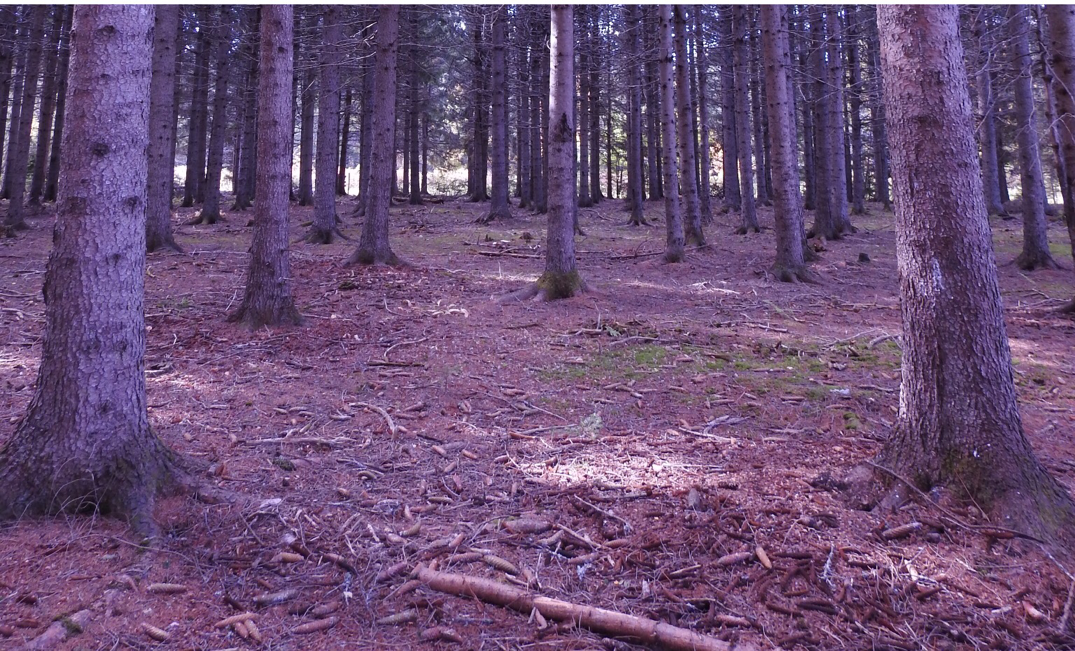 With the size of this stand of Norway spruce, the squirrels in this area will be well fed this winter.

In a huge stand of Eastern cedar, the forest floor was covered in rusty coloured bits of cedar from the lower branches as the trees grow upwards. 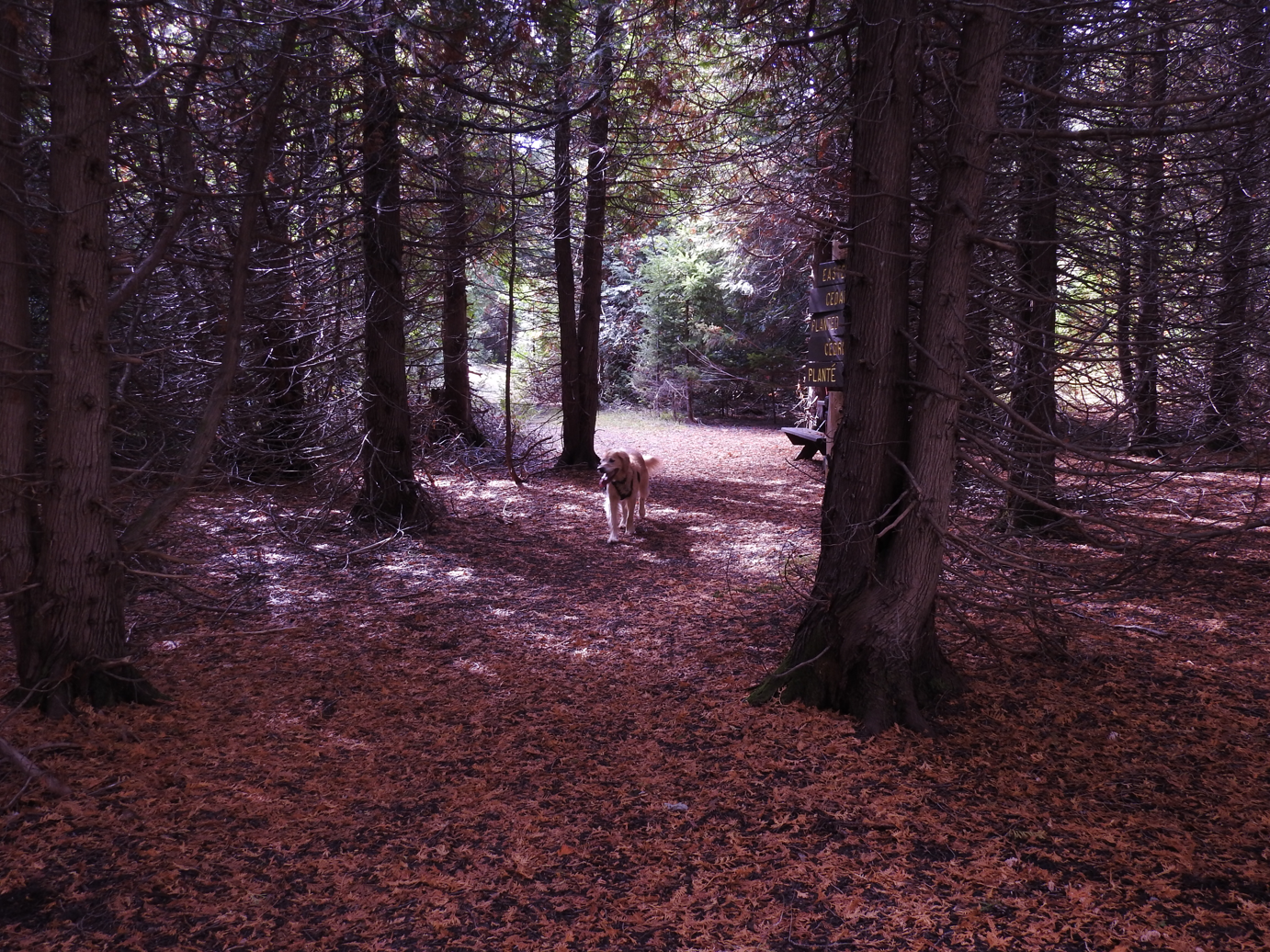 No light made it through the canopy and the rusty forest floor was unique in appearance, colour and texture.

We had lunch under a red maple near an inlet of Malpeque Bay. 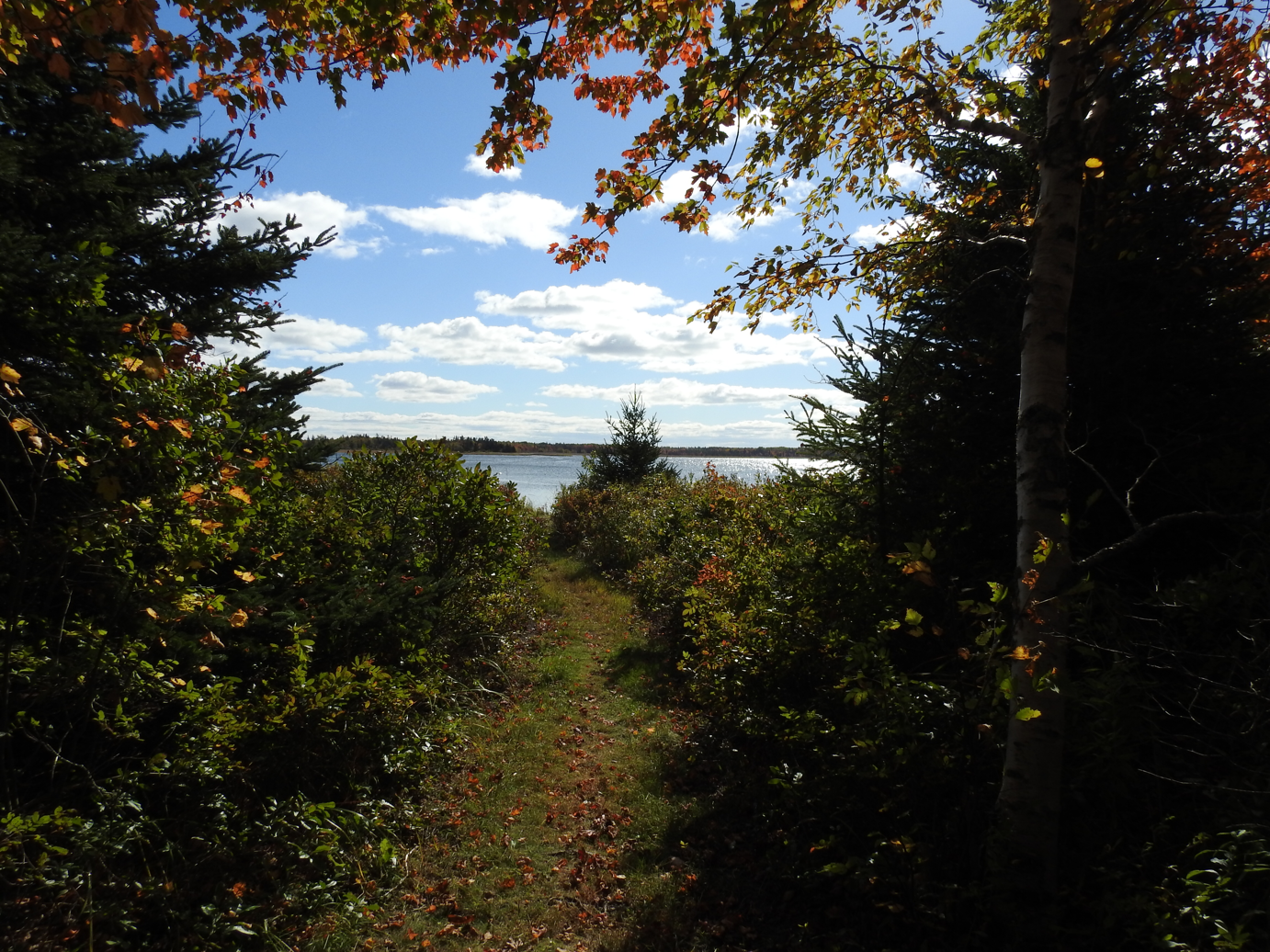 A red maple and a wild apple tree provided some shade for the picnic table. As we ate lunch, enjoying every morsel of our sandwiches and black tea, a flock of red breasted nuthatches landed in the trees around us. They didn’t stay long but I managed to take one photo. I have admired striped maples this fall and the leaves on these trees along the trail were huge, evenly coloured and resembled patterned velvet. Finally, as we finished on the trail there was another picnic area with a guest book. There, we finally saw a raccoon, though not a typical one. Hope he doesn't do too much damage with that axe. How could you not go walking with that dog!

What a beautiful walk you had! Thanks for sharing it with us. Love that raccoon, lol -- great folk art!

Wonderful pictures! They took quite a long time to load, though, which is unusual for your blog. I love the nuthatch especially. :-)

Georgie is a star Marie, gosh she loves those walks doesn't she. The colours in the autumn trees are spectacular and so beautifully shown here. Hard to imagine that it's not long before the snow arrives ✨

Gorgeous Georgie! It's lovely to have a dog you can trust of lead.

Glad you are still enjoying forays into the woods while you still can. It's so beautiful, and I admire you having that so near to you.

Looks as though you had a good walk - and Georgie too! That's a mean-looking raccoon.

What beautiful, peaceful, and restorative woods. You are certainly blessed.

Lovely place for a walk and that dog surely is a beautiful one!!

Absolute bliss. For you, for the Granddog and for us.
Thank you.

Looks like a wonderful walk through the woods. Lovely foliage too, so pretty to see. The first photo made me think it could be an opening scene of a movie starring Georgie, the grand-dog of the woods. She's ready to take all her followers on an adventure to see the friends who live in the woods.:)
Have a wonderful weekend Marie.

I could not publish Bill's comment the regular way, so I copied it and put his blog address here.

I know, Joanne. She's a beauty with a sweet nature!

It was huge, Debra!

I had never seen a nuthatch before, Jan.

I know, PDP. I can't believe snow is on the horizon!

She runs ahead and bounds back when called, Linda.

There are so many trails to explore here, SW.

Georgie was exhausted, John. She does twice as much as we do with the running she does!

We are indeed, Tabor!

That trail was a great find, Angela!

The granddog adds to the bliss, EC.

I miss all those beautiful colours here! I find Autumn very different this year.

I will look at your fantastic pictures again...

Beautiful photos, great colours. Love the nuthatch and Georgie looks like a lovely dog. I had to laugh at the raccoon. Have a great weekend, Diane

I'm glad we weren't hit by the falling cones, Catarina. They were big!

That raccoon was a surprise, Diane.

I don't think I have ever seen more than a single nuthatch at one time.

It looks nice here with much orange and yellow, but what happened to the red this year?

Lots of red here, AC. Throughout the maritimes really!

Walking the dog through the forest was always the main thing I wanted to do when I began hiking years ago. I didn't live in a place where I could have a dog for a while, but I made sure I took my dog out as soon as I got her when I moved here.

Dogs are great hikers, off-lead or on, Ratty.

What a lovely hike through those gorgeous trees with such a fun furry companion!

What a lovely area to explore!! I hope the snow holds off for a bit, I hate to see the kids trick or treating in snow lol!

Georgie is a great companion, Marilyn.

We were lucky this year with Hallowe'en weather, Jenn.

There are a number of such woodlot trails here, FG.