It had been a beautiful day, though the cheek-stinging cold made it uncomfortable. With the high wind and the 2 degree C temperature, scarves had to be added to the winter attire already in use.

Sunset was fast approaching as we headed to the harbour. The eastern sky had dissipating high white cloud. To the west, cloud associated with an approaching front was a sign of the rain or chance of snow for the following day.

When we reached the boardwalk, the sun was below the horizon while the moon was already high in the eastern sky. 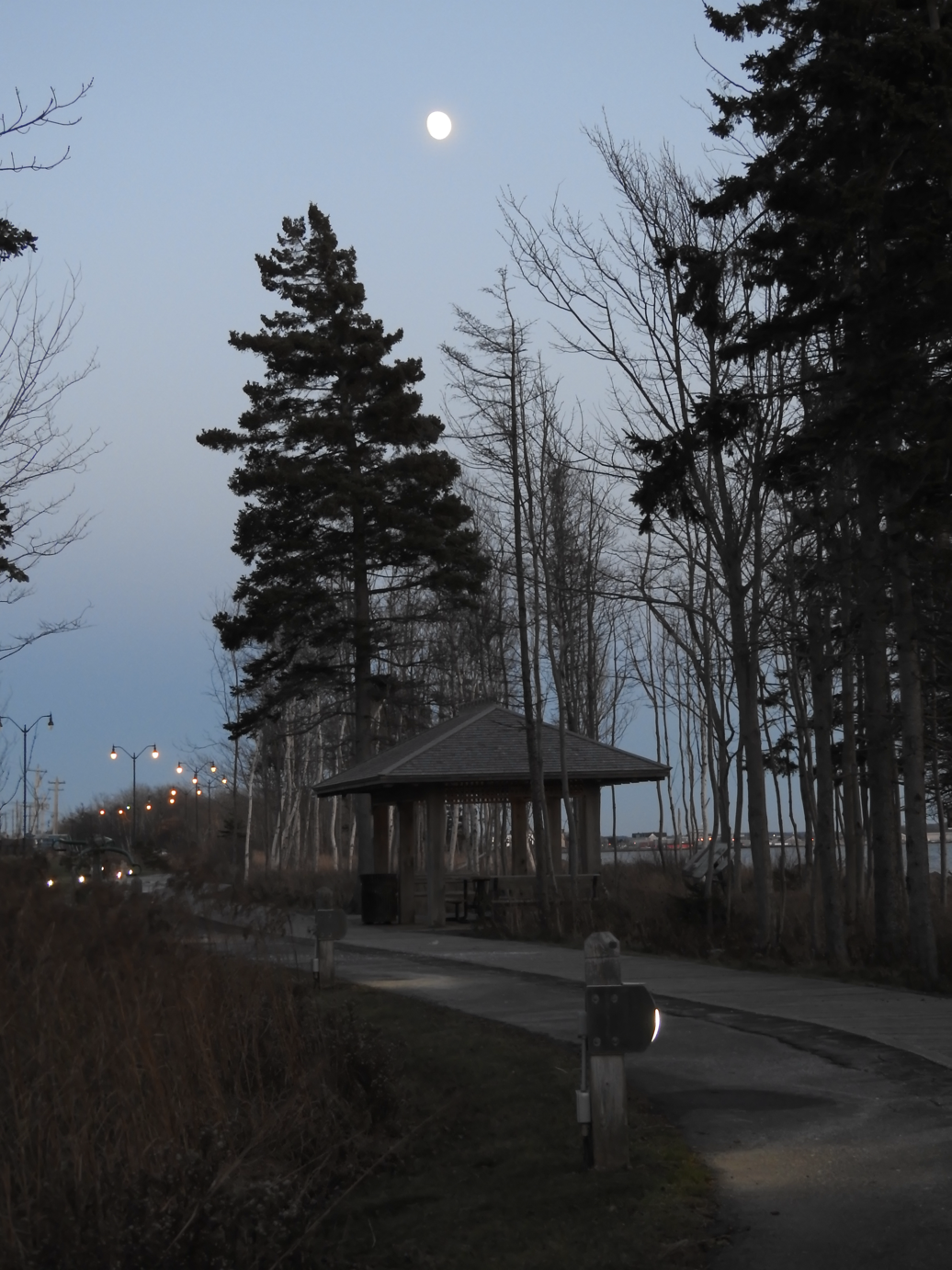 The windspeed had decreased as the sun disappeared. The usually busy boardwalk was deserted this time of day as people prepared their evening meal or headed home from work. It was still. 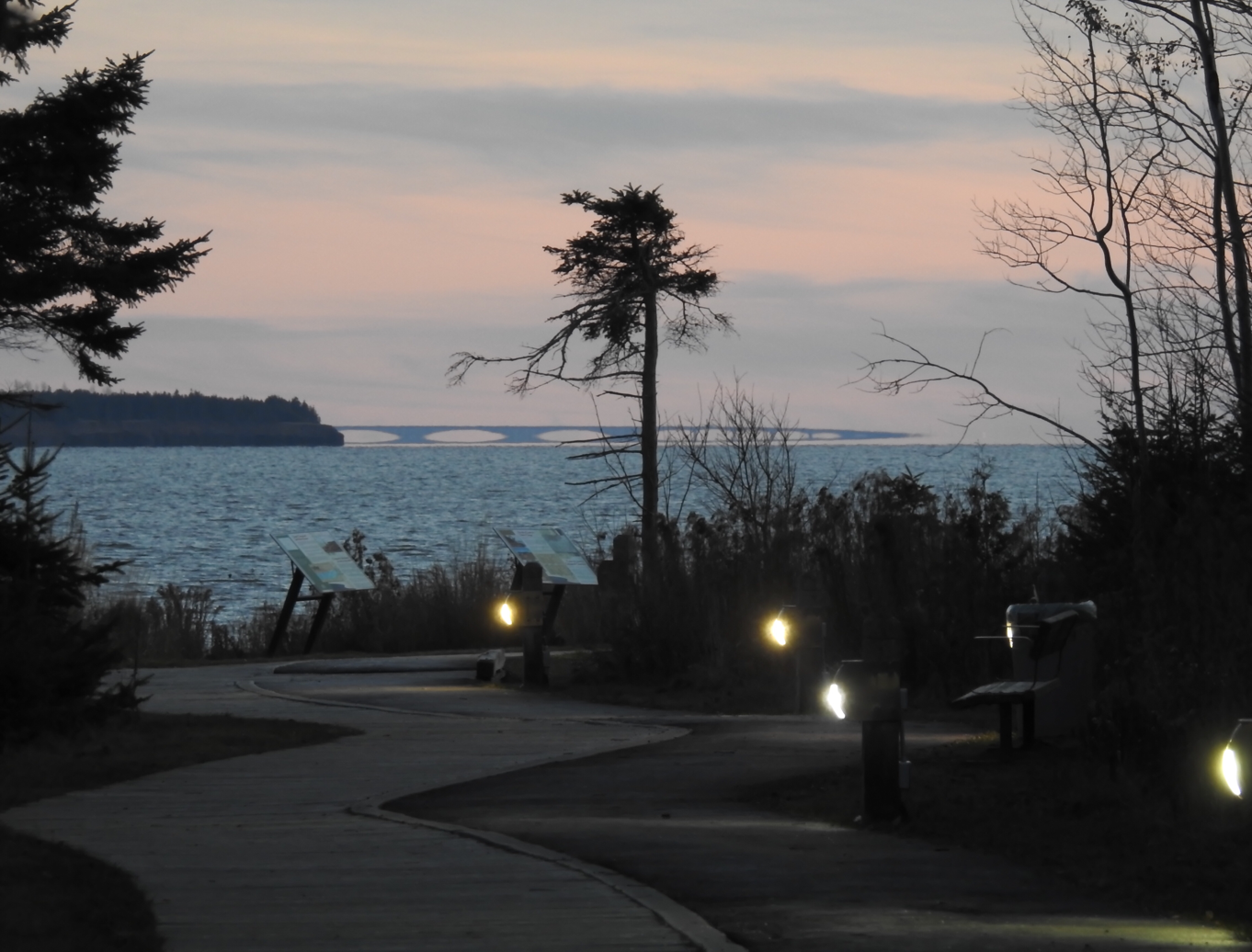 The light around us faded over the next fifteen minutes. The sky went from haze to blue 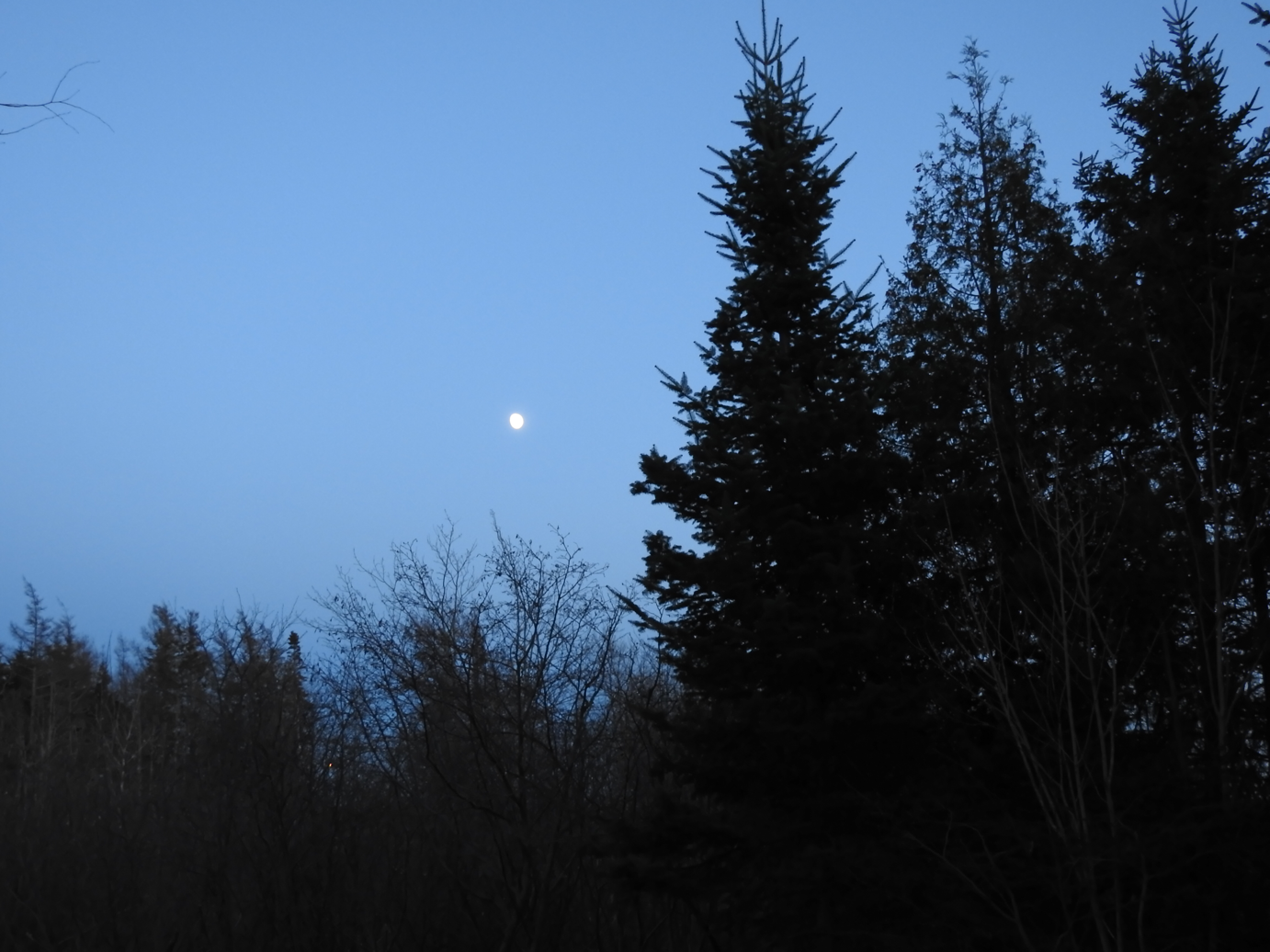 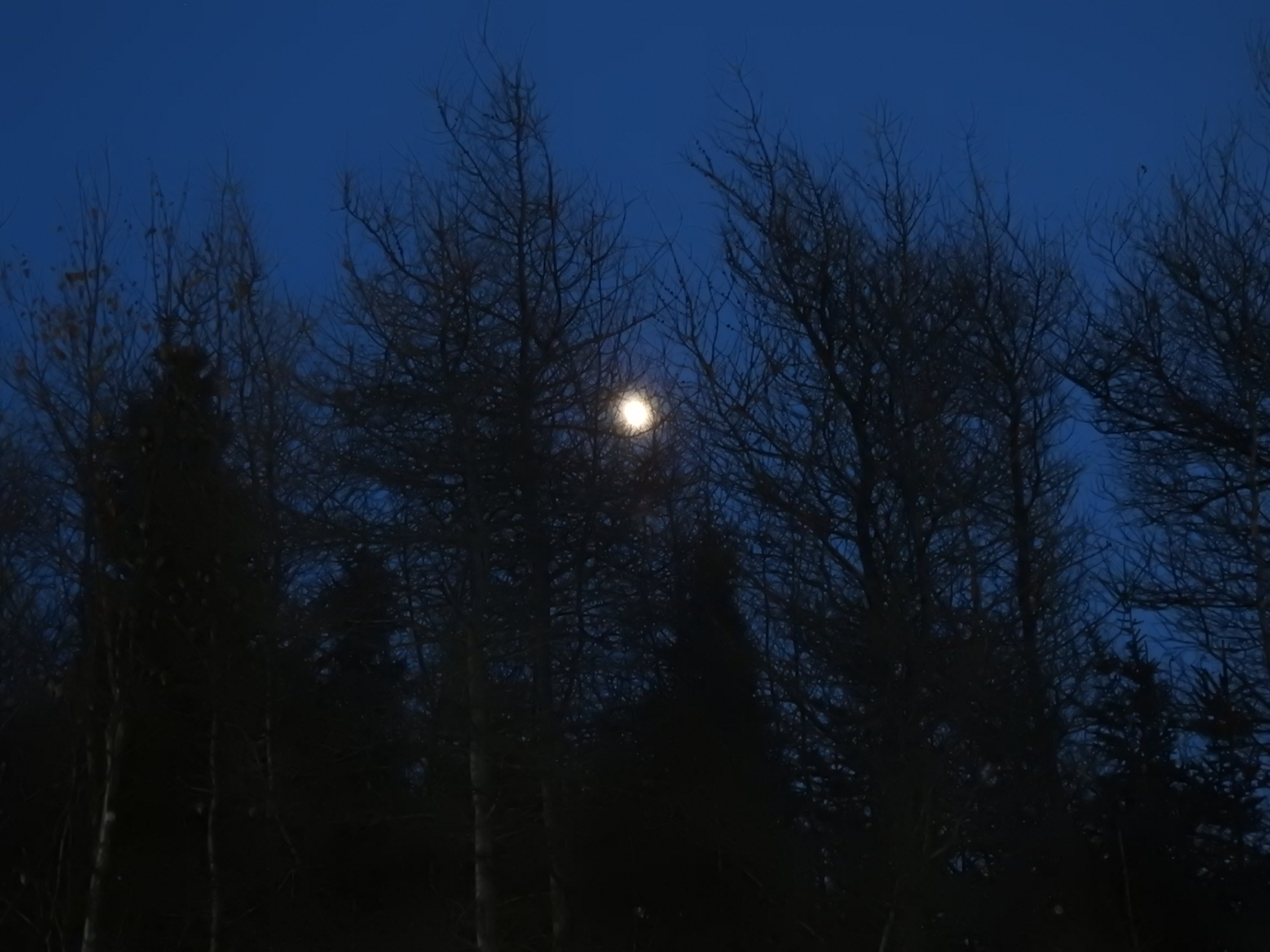 as the evening settled in. The moon shone in all his glory and reflected on the water. 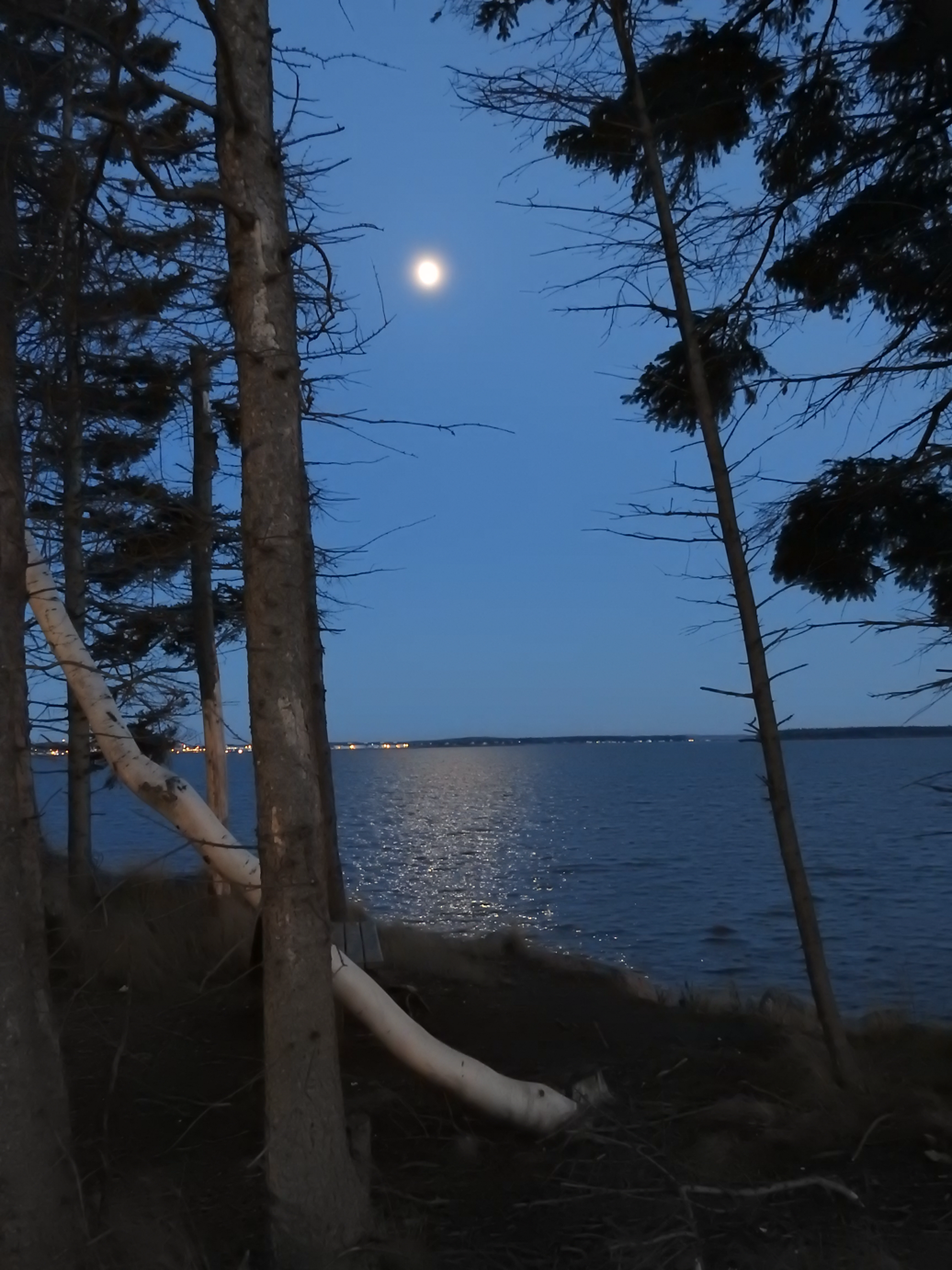 The land around us darkened but in the distance, the lights of the city twinkled. 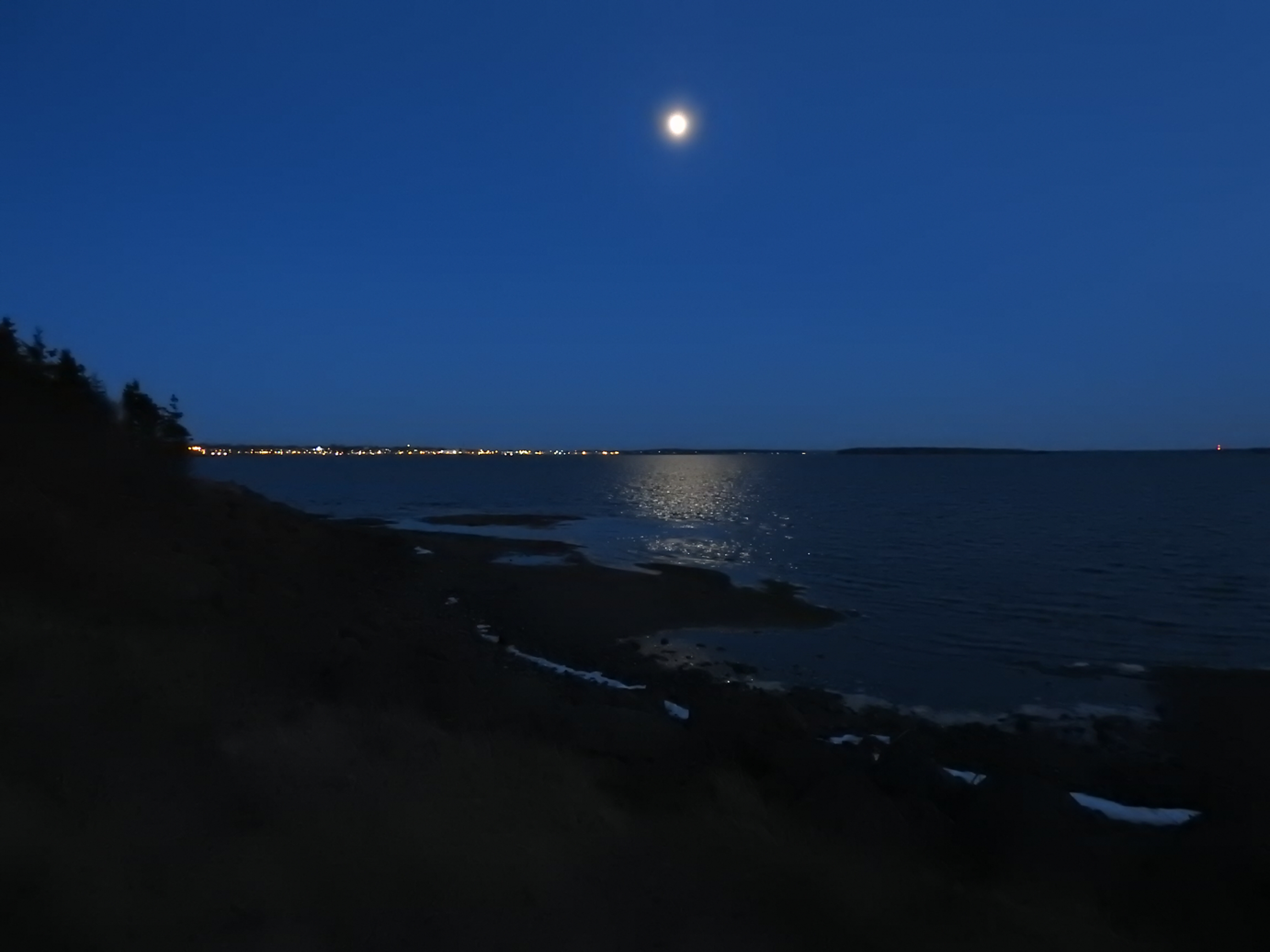 The western sky was another story!

Wonderful transition from early sunset to evening light Marie.. sounds so cold though, I can't imagine those temperatures ☺

That's a beautiful time of day!

It's really a lovely series of pictures showing the beginning of night. I especially like that last picture with the moonlight in the water. :-)

Ohhhh Marie! Lovely walk in your corner of the world.

Well, I hope you eventually got your evening meal too, though your time was well spent getting these fine photographs of twilight. We're having very similar weather in the UK at the moment.

I do love that time of day. And the incredibly fast light show.
Calm and beauty captured in a wonderful series.

You were brave to wait out the cold as the sun set!! Nice photos.

The beauty is stunning in your photos. Well done, Marie.

Everything there look so beautiful in the darkness.

It was invigorating, PDP.

Thank you, Mildred. Merry Christmas to you!

We looked over that moonlit water for a while, Jan, in spite of the cold.

It is a beautiful area, Linda, day or night.

The time there was priceless, John. Worth every minute in the cold.

It is my favourite time of day, EC.

We were dressed for the conditions, Tabor.

It was perfect, Ratty.

It's nice to see your blue hour photos.

Great photos but we were -6C yesterday morning, about 30 degrees too cold for me!!! Keep well Diane

It looks like we have more snow in the ground. I can only imagine those temperatures. Beautiful description, lovely photos! I felt as if I was there!

We are adjusting to the cold here too, Diane.

We had our first snowfall but it's gone again, Angela.

Thanks to you, Mage.

So glad you stayed long enough to see this and show it to us, Marie. I bet then YOU went home and made supper. :)

these are such beautiful views and blues!! it's been bitterly cold here, we were out last night - if you bundle up, it's not so bad. it's a wonderful time to be outdoors enjoying the skies and for us, it was christmas lights!!!

It is just as likely my husband would make supper, Ginnie. He is a great cook.

It is so dark in that part of the bay, Debbie. The lights along the path are perfect though.