The elderly man approached as I took a photo of the gazebo which overlooks the stream. He walked up to the gazebo and I continued to take photos of the area. My fingers was numb from the cold, the high wind with the -2 C temperature made fleece mitts essential. They didn’t work for the camera however.

A few minutes later, I walked to the gazebo as the man walked away. “Oh, a pair of mallards this morning,” I commented as I passed him. He came back with me. We watched the ducks for a minute and then he said, “See the muskrat lodge over there?” He pointed to the pile of straw straight ahead of us, in a channel from the main stream. “It wasn’t there yesterday,” he said. 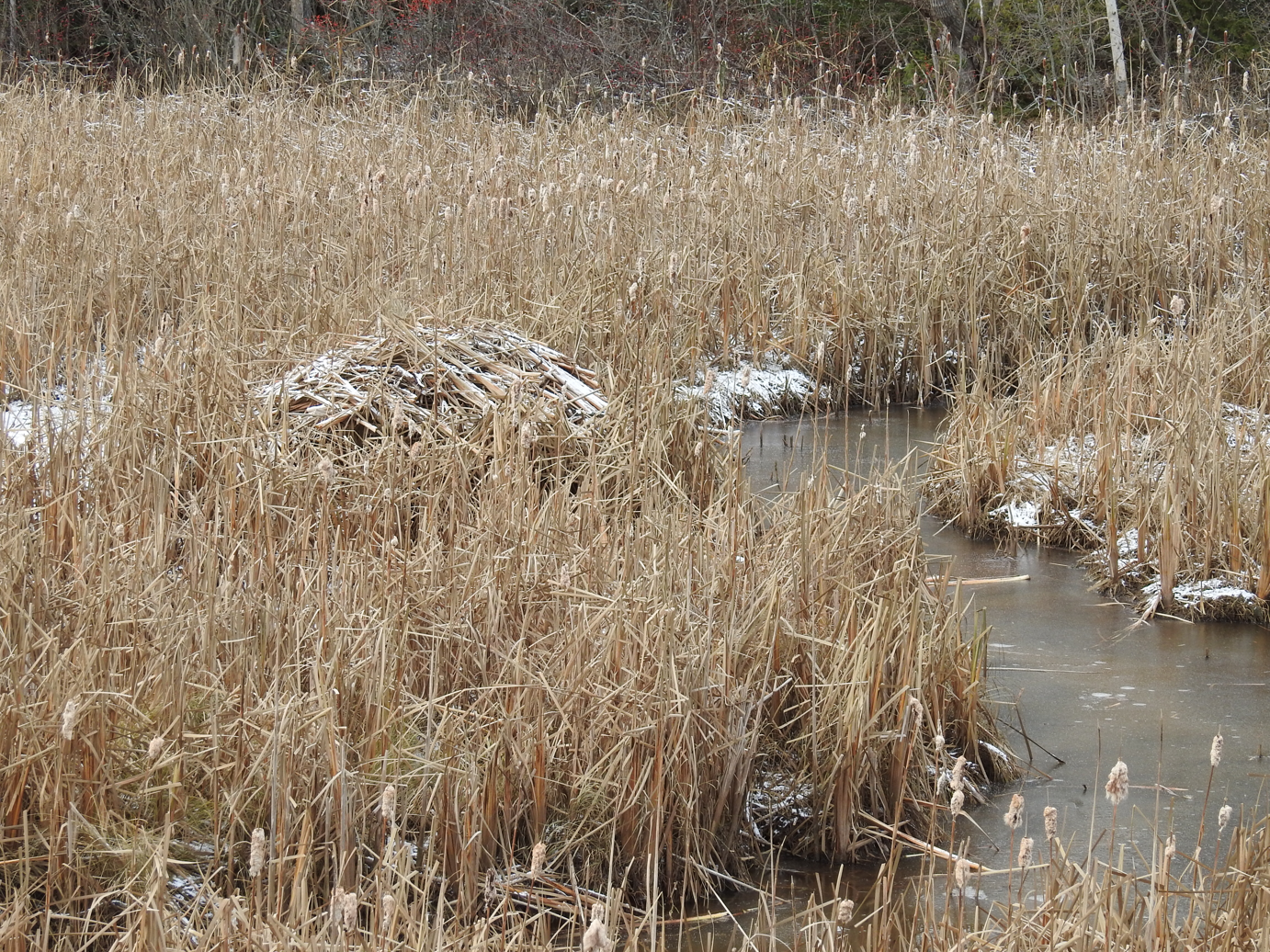 “I didn’t see it yesterday,” I commented. “I saw two muskrats by the lower bridge last week but couldn’t manage a photo of them. I’ve had no luck with muskrats for the last two years.”

“A group of us watched six of them one day by that bridge,” he said as he pointed over his shoulder. “They love peanuts in the shell and wait around by the bridge for them.” He showed me the bag of peanuts he carried on his walks.

I thanked him for the information and for pointing out the muskrat push-up. He turned to leave and we said our goodbyes.

I headed up to the bridge nearby, hoping to see a few birds or maybe a squirrel. I looked in the water below. There was Mrs. Muskrat, bigger than I had ever imagined, sat on a stick. She was huge, but with what looked like a tiny face, until I noticed the eyes further back on her head. 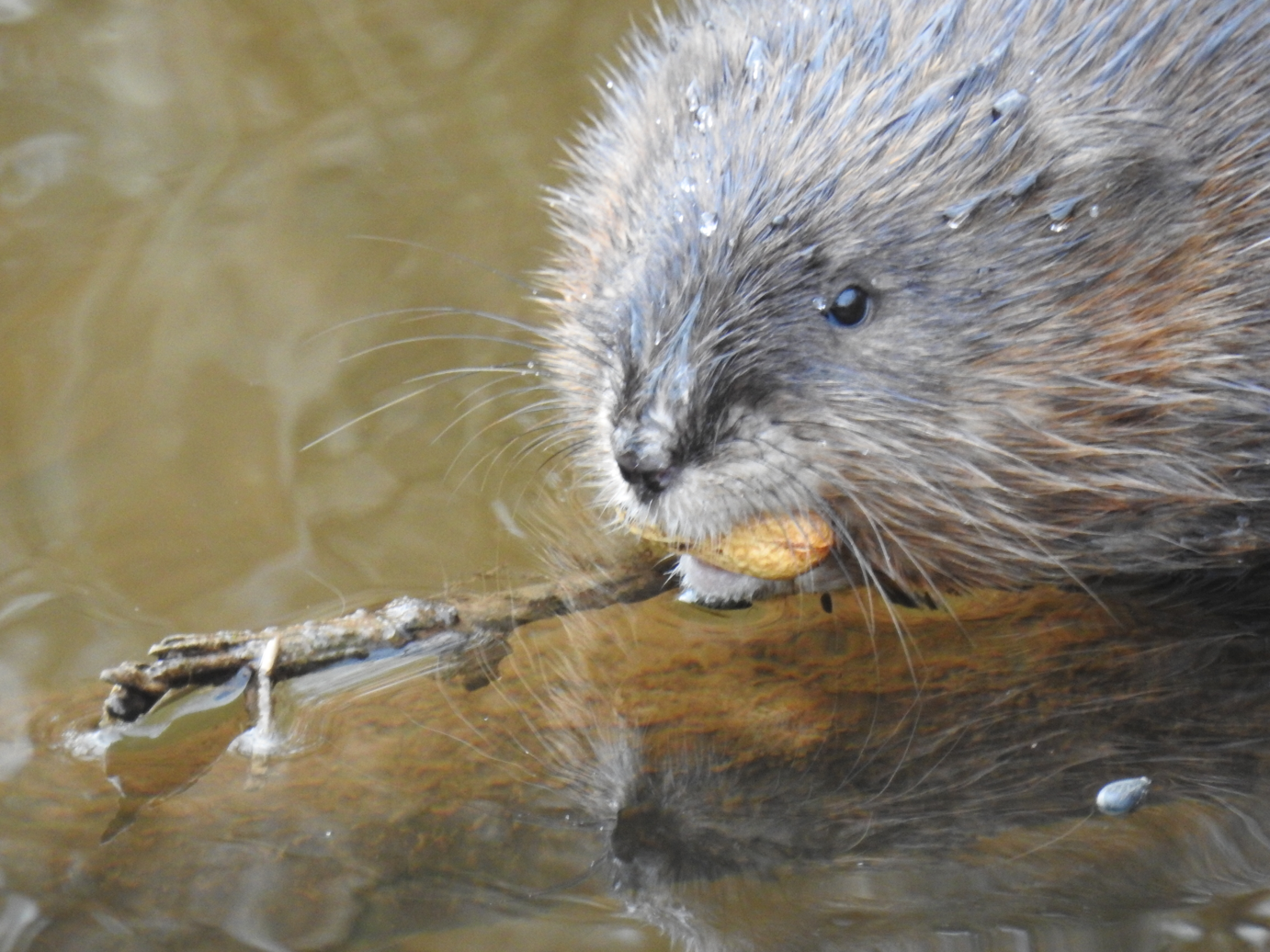 She had a peanut shell in her mouth. Mrs. posed on the stick for a minute, then slid into the water and was gone.

My husband finished his walk and we met by the bridge. We stayed for a few minutes to see if she would reappear. No such luck!

By the time we arrived home, I was anxious to see the photos. While I’d only managed to get part of her tail in the shot, we were both pleased with the photo; you could even say excited after the two year quest.

We lead a simple life!

A simple and delightful life, one you are willing to share with your admirers. I love that muskrat face! :-)

I would have pumped fist and hollered for those shots, too. I've only ever taken one very poor muskrat shot.

Isn't it nice, the people that we meet? I don't mind the muskrat....kinda cute!

What great photos. And such serendipity meeting another observant outdoor fan with a secret to share.

That's a super shot of the muskrat! Of course it makes me think of that cheesy song "Muskrat Love." Remember that one, lol?

I don't think I've ever seen a muskrat or their home. Very interesting.

How nice that you met the elderly man who shared some info for the muskrat and then you got the photos. Great photos and a great story. Thanks for sharing.

I love the peanut shell. I would not have known that's what it was, if you didn't mention it.

Oh well done Marie, you got two wonderful shots, enjoyed seeing them. This is how Feel about the Tawny owl, I've been trying for ages to find one!

I love those creatures too, Jan.

I was lucky that day, Diane.

They are hard to photograph, Joanne.

I see that gentleman every time we are on the boardwalk now, Jenn.

I love the perfection in all the small things, EC.

All we have to do is begin with a greeting, Celia.

Do I ever! Saving it for another post, Debra.

They are interesting creatures, Barbara. Known for their fur of course.

It is great to share info with fellow travelers I think, Bill.

That one has eaten a ton of peanuts, HW.

Good luck with your quest, PDP.

That would be almost thrilling.

I love this post. It seems like so many encounters I've had with both humans and animals while I was out taking pictures.

Seeing an animal you’ve searched for is exciting for sure, Ratty.

i so enjoy meeting people like this, they are the best conversations!!

great captures, i'm glad you finally "got" him!!!

Thanks, Debbie. The human conversation was wonderful too.

They are speedy little creatures, FG.

So glad you have achieved your ambition those are wonderful shots! How lucky to meet the gentlemen hopefully with the help of peanuts you will manage to see them again! Sarah x

We can learn so much from fellow travelers, Sarah..