Some of our favourite trails on Prince Edward Island are on the Bonshaw Hills, east of home. It was overcast, cool and calm and we only had two hours so we decided to stick to the main trail. It did not disappoint. While the deciduous trees are leafless still, the green of the coniferous trees was rejuvenating. 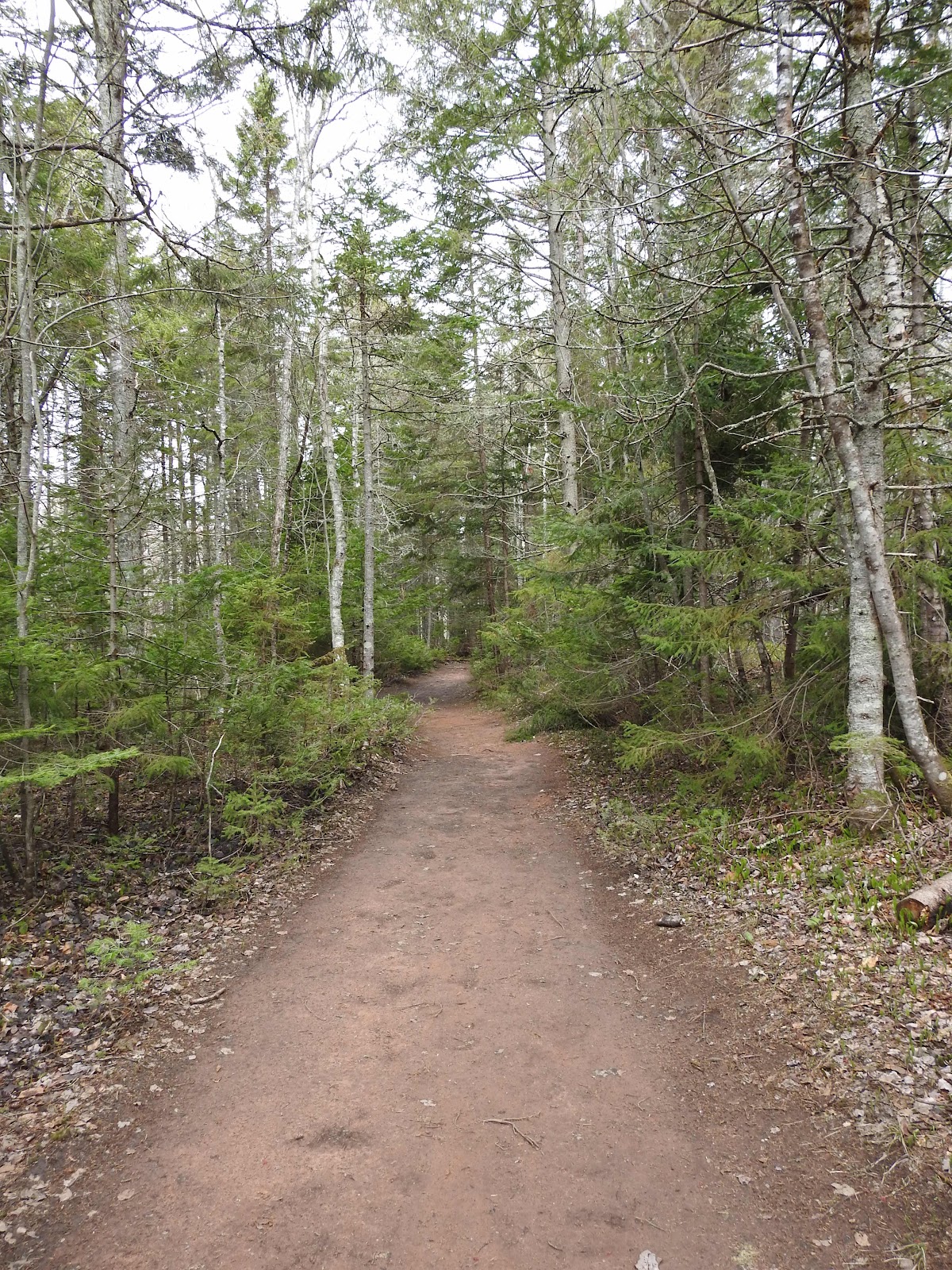 There were areas where the wind had taken its toll over the last six months. Young trees were felled as if a giant went through and toppled them but not just young trees. 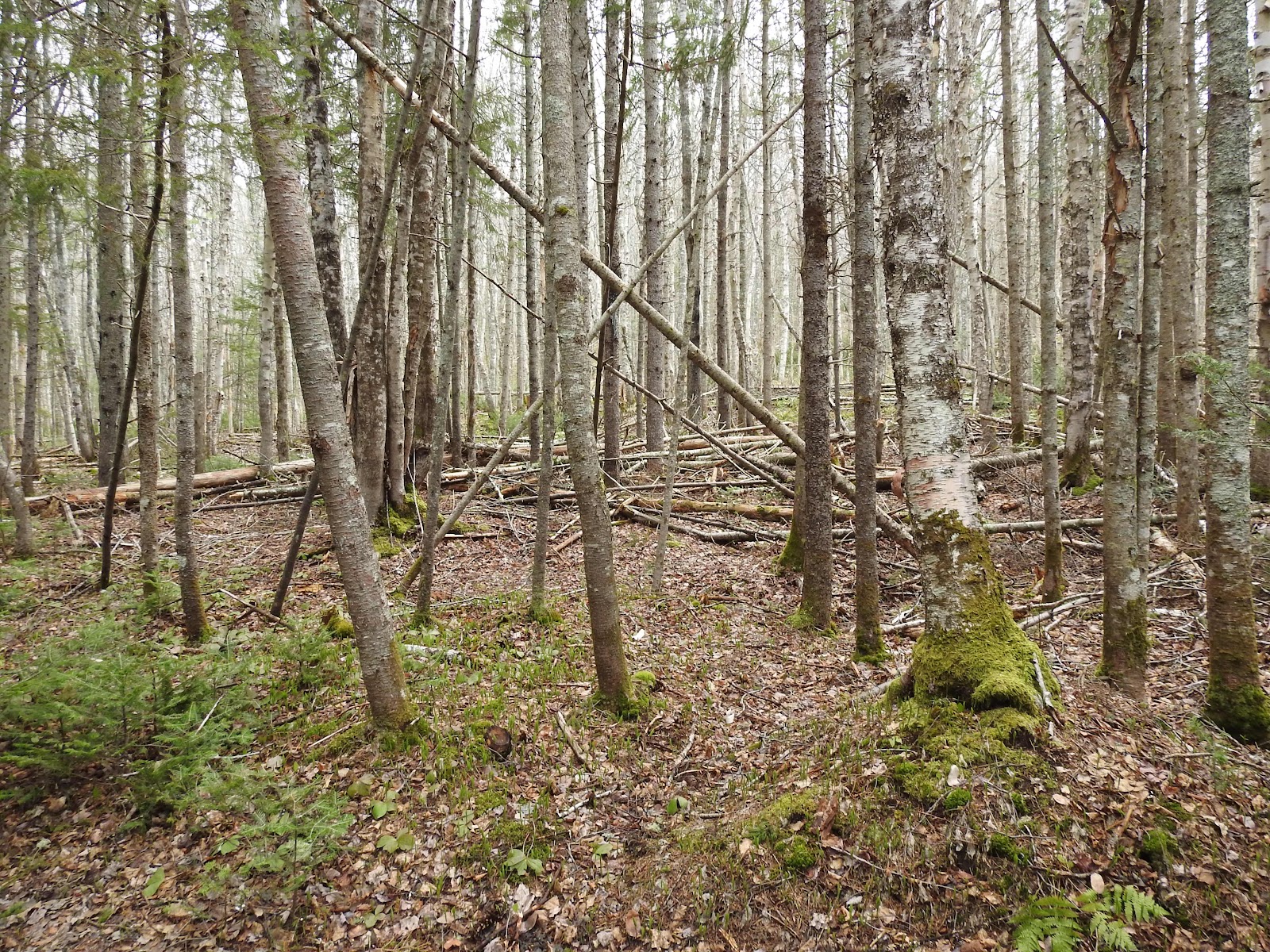 Some of the mature trees succumbed to the high wind this past winter and spring. They were cracked off like match sticks. 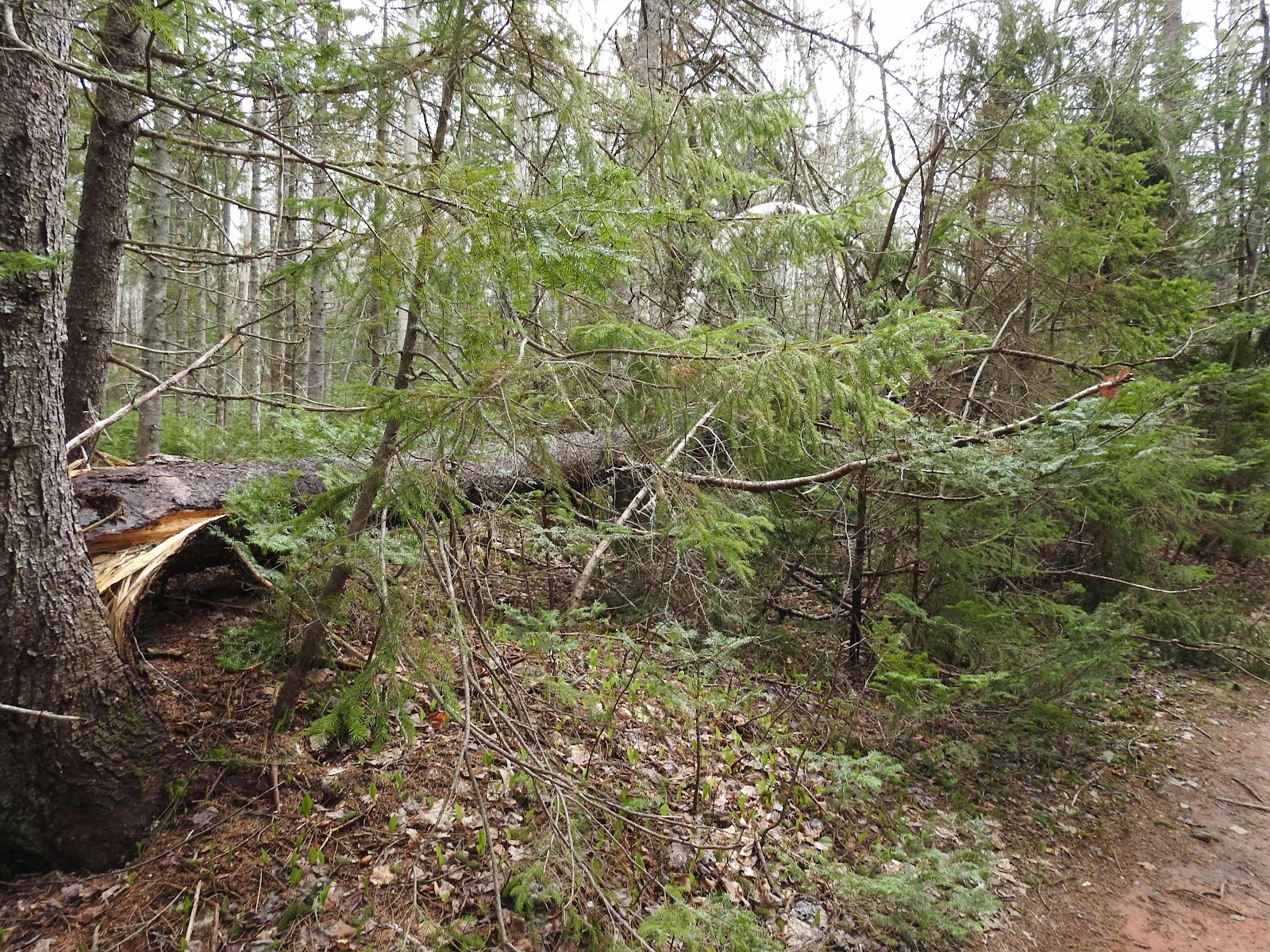 The exposed roots on the trail always fascinate me. 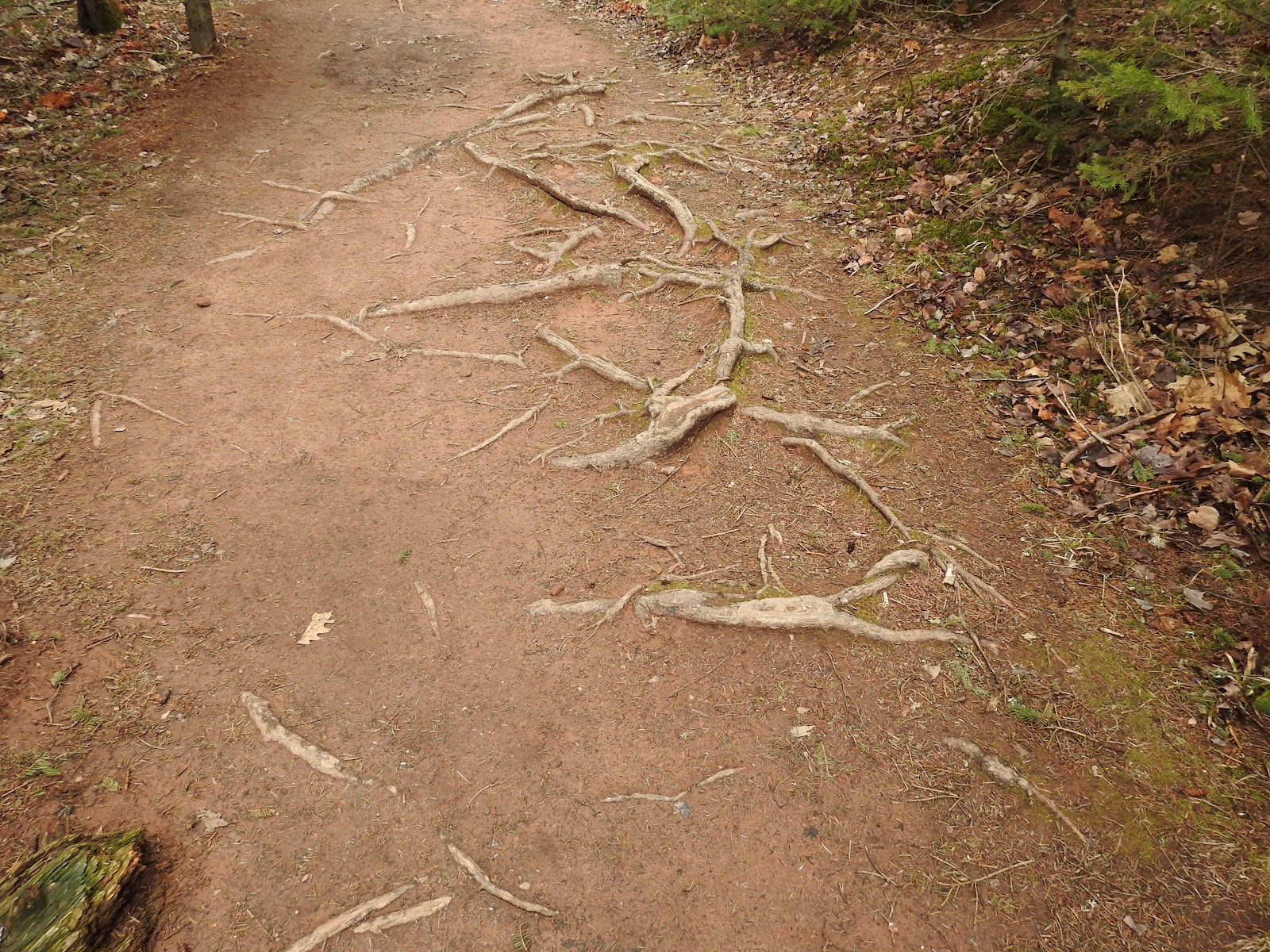 These sacred vessels acquire and transport life sustaining nutrients which the tree needs to sustain itself and us ultimately. They are visible in numerous places on the trails.

Along the trail, we stop for a look at the West River, 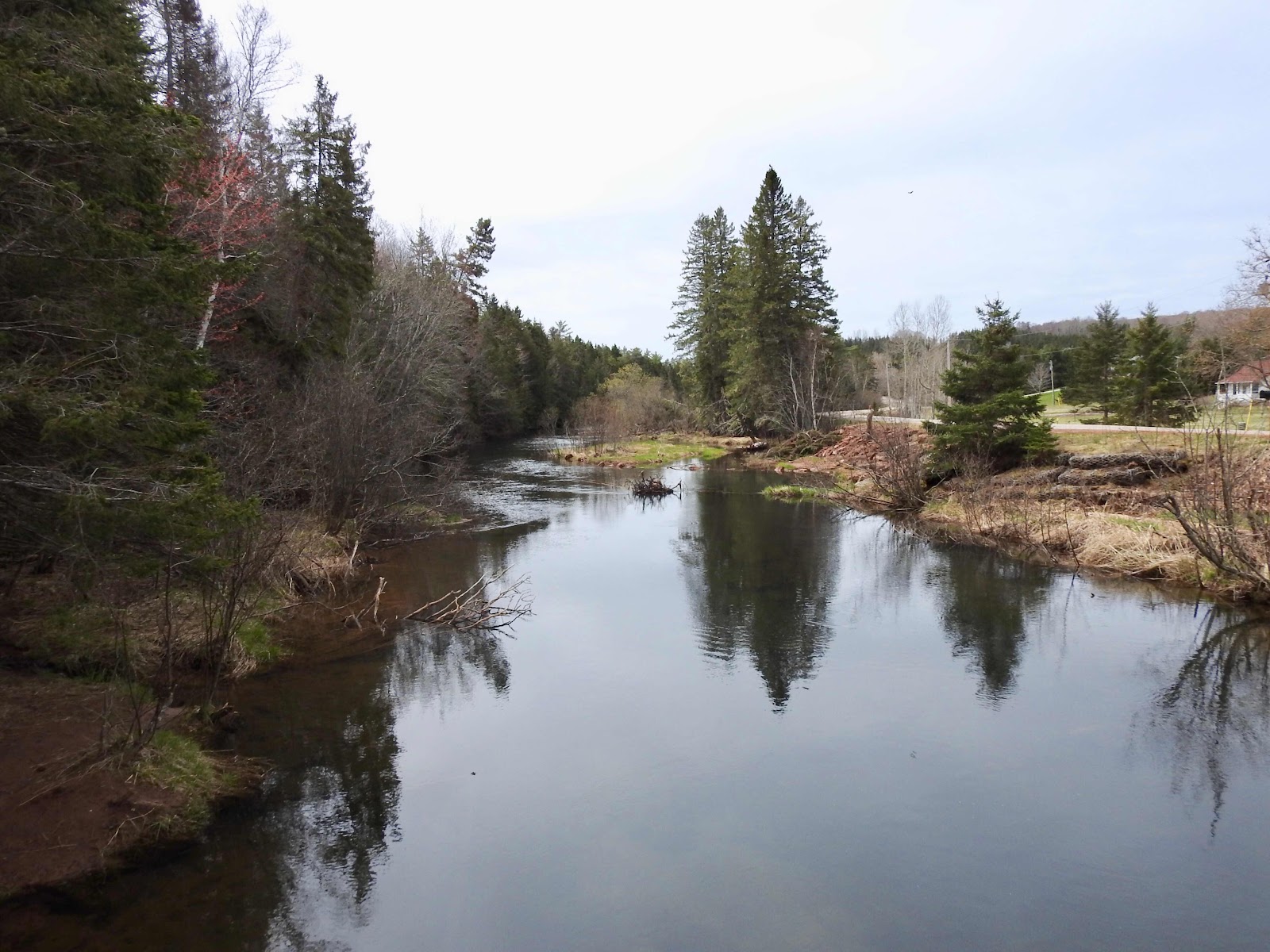 a popular place for anglers. This area has stairs which provide a short-cut to other trails off the main trail. 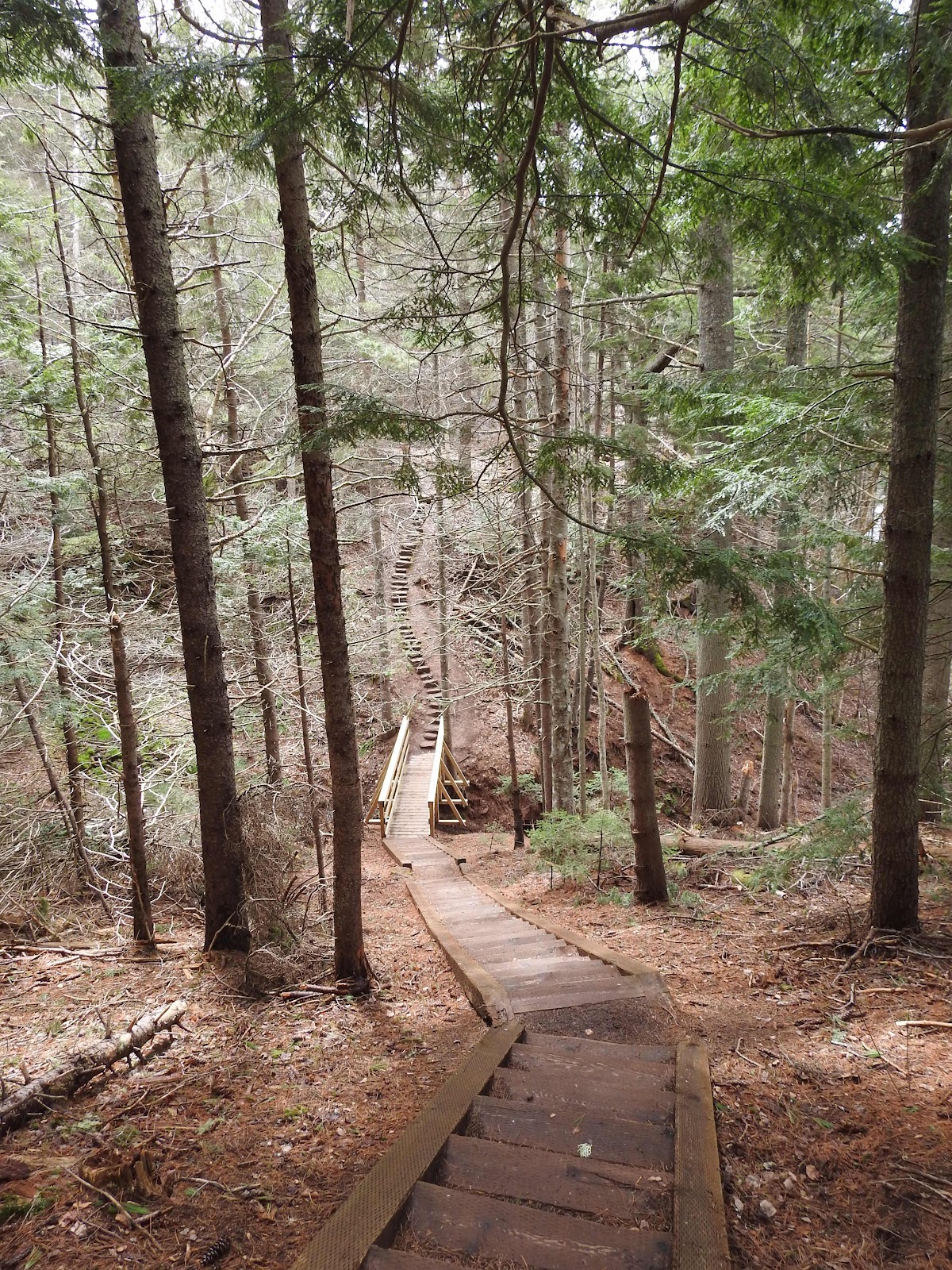 Some of the trees show how busy the woodpeckers are in the hills. 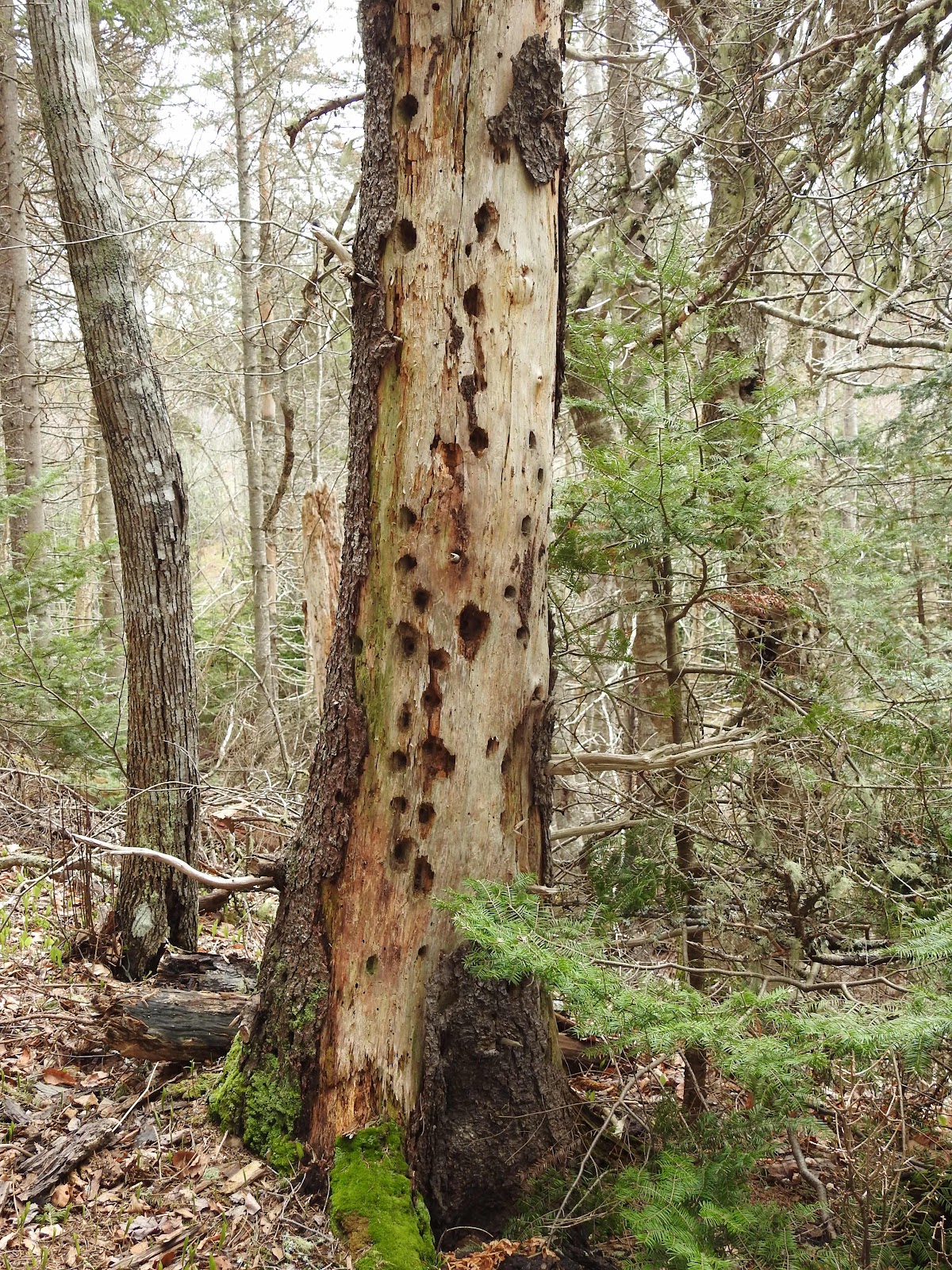 We see Pileated and Hairy woodpeckers. Neither allows time for a photo.

Part of the trail goes through old homesteads where some huge old trees stand majestically over the countryside. One has a swing probably like it had decades ago. 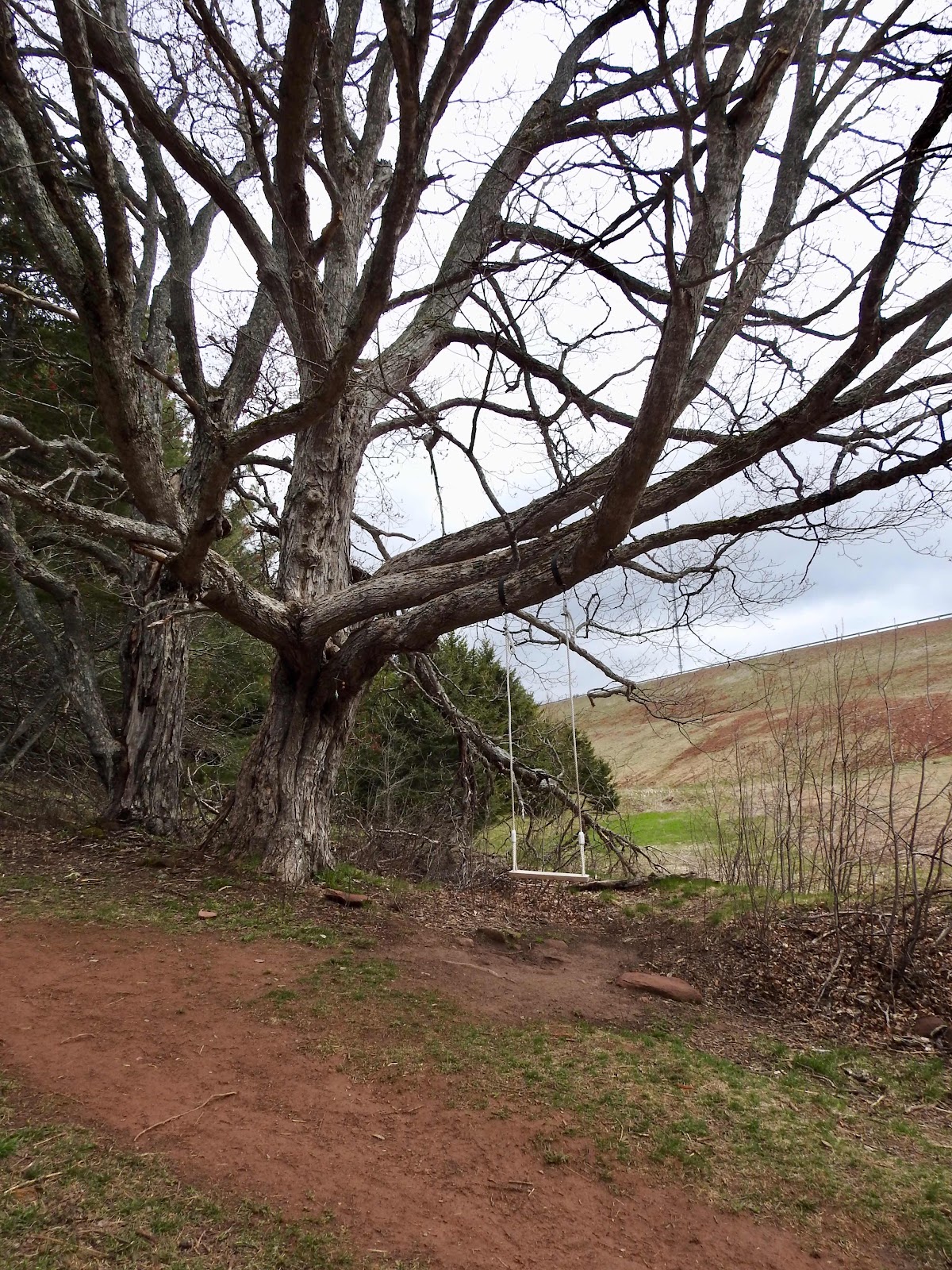 There are several stands of pine trees along the trail, where the trail is covered with pine needles and the canopy is enclosed. The trees have whorls of empty branches as the tree grows taller. 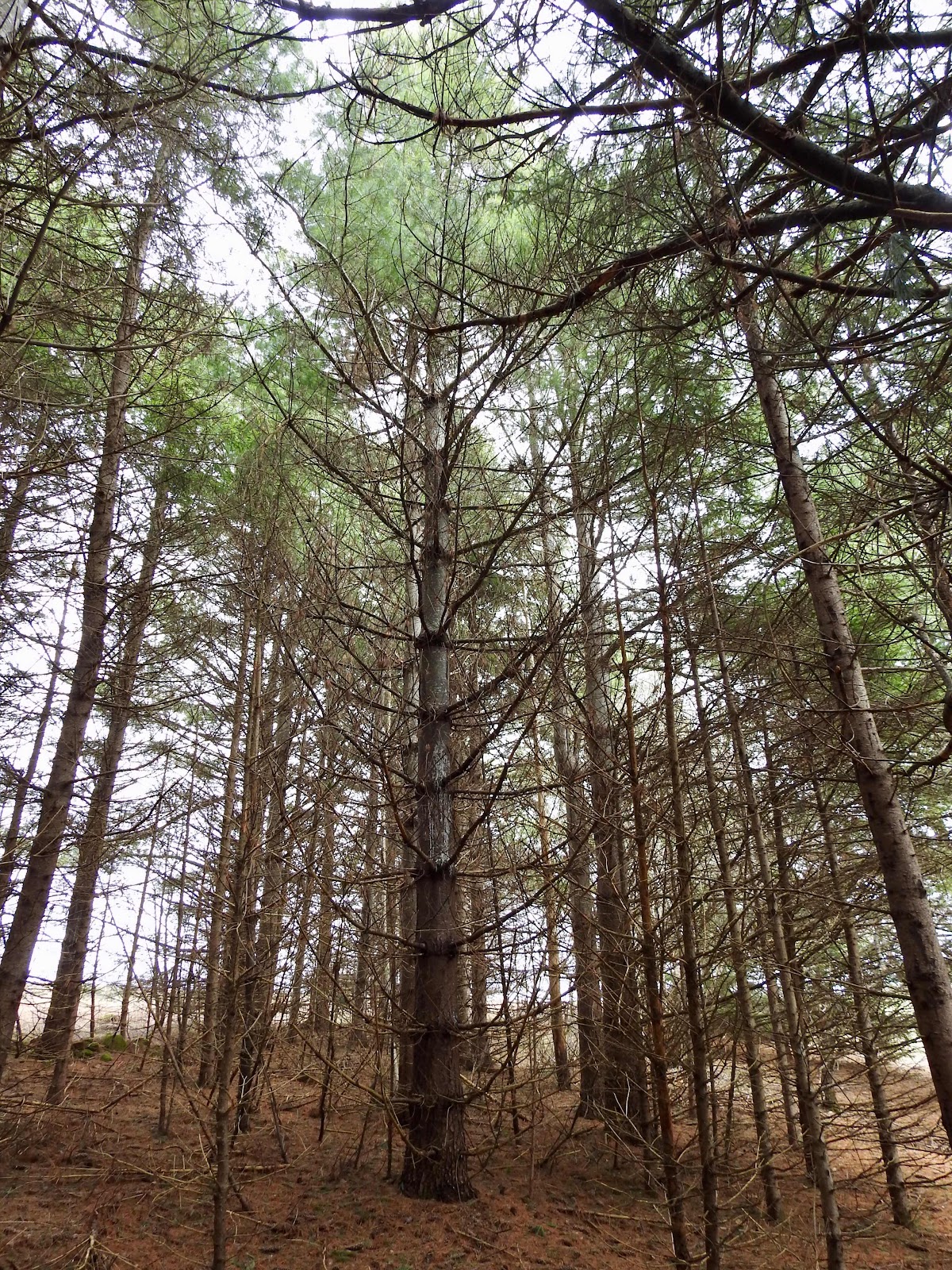 We had our picnic at the park where there were a few bikers. The area is busiest when school is over for the summer.

Posted by Marie Smith at 04:08
Email ThisBlogThis!Share to TwitterShare to FacebookShare to Pinterest

It's a beautiful, serene place. Those stairs are so inviting to me. Thank you for sharing it with me, Marie. I have grown to love PEI, too. :-)

What a wonderful trail -- love those stairs!

It was a hard winter for sure, on both the tress and humans. As I understand it, we are still running below average and have been since around October.

A nice trail and I love your photo of the river. Always a little sad to see the remnants of an old homestead, like the swing. Wishing you a nice day.

Hi Marie, I am absolutely delighted at finding your blog. Last weekend I spent a couple of hours going back into your archive and looking at some of your earliest posts starting in 2013. The thing I found so interesting was the way you started blogging like someone who had been at it for years. From the very beginning you published excellent posts in a style that is, in my opinion, just about perfect. What you have here is my favorite kind of blog. In today’s post you have taken a walk and snapped photos of interesting sights. It took me years to come up with a similar format that I’ve been using for the last few months. And your posts are so reliable happening every few days. Another interesting thing I discovered in your archive is that you and your hubby are both retired teachers. I am also retired from teaching business at high school level. I have discovered retired teachers to be interesting bloggers. I wonder if your husband has a separate blog of his own? Just now I’ve looked over your last 3 posts and enjoyed all of them. In previous posts I enjoyed the ducks and geese. I admire your birding knowledge … knowing the names of each bird and the ways you describe them. A real delight for me would be to have you walk with me and tell me about the birds I see around Green Lake in Seattle. Knowing that is unlikely I will keep watching your posts and go along with you that way. :-) Have a great weekend and thank you for all the kind comments you’ve left for me on my blog. John

John says it all so beautifully. Today you have taken us to a truly beautiful place, and I enjoyed every step of the way.

Sweet to see that you have such lovely trails for walking over there! I have not discovered any trails around here. Love those roots showing over the surface of the ground, it reminds me of grandma's hands showing all her veins! Such interesting work of the wood pecker. I wonder if it hurts the trees. Thanks for sharing!!

What a lovely trail to walk on. Bonshaw Trail is truly a gorgeous place as your photos show.
Enjoy the day, Marie.

Thanks for the walk through the woods. This trail looks delightful.Wonderful pictures and descriptions to go with them.

A lovely spot for a hike!

You live in, and generously share, a truly lovely part of the world.
Many, many thanks.

We have a saying around here, and in the national park, "If there are daffodils, there used to be a farm house." I see that goes for orphan swings, as well.

It's always a pleasure to walk and enjoy the changing seasons with you Marie. Walking through trees is one of my favourite things, the air is so much fresher when trees are abundant 🌲

i can only imagine how serene it feels to pass through such beautiful trails :)

your words about roots are so lovely

i found the stair in middle of the woods so amazing

swing hanging with old tree made my eyes teary ,so many memories of peaceful summer noon sprang in the mind :)

I would love to walk on this trail. Beautiful scenes and photos.

Enjoy your day and weekend!

Oh, I want to sit on that swing and gaze at the surroundings.
What a beautiful place to hike.
Great photo of the tree woodpecker holes.

I love the Woodpecker tree. One of the big ancient Oaks in my backyard began to attract woodpeckers at the end. Finally, I had to cut it down since it was dying and so close to my house. I loved that tree and I really cried over the loss. My backyard never brought me the happiness it once had after the tree was gone. So sad.

Another wonderful walk with Marie and hubby. You've made my day and thanks.

You great trails! It is always a pleasure to look at your pictures.
: )

What a great place for a walk - I miss woodpeckers!

Lovely photos! I also like the roots visible along the trails.

That looks like a well-looked-after nature trail and a lovely walk.

I have not been able to comment on your site for a long time because I don't have a blogger.com page. I notice that the comment box has changed so this is just a test.