One reason I love Cavendish Grove is the bird life in the basin every spring. Two couples of Canada geese are nesting there this year and two pairs of ducks as well. 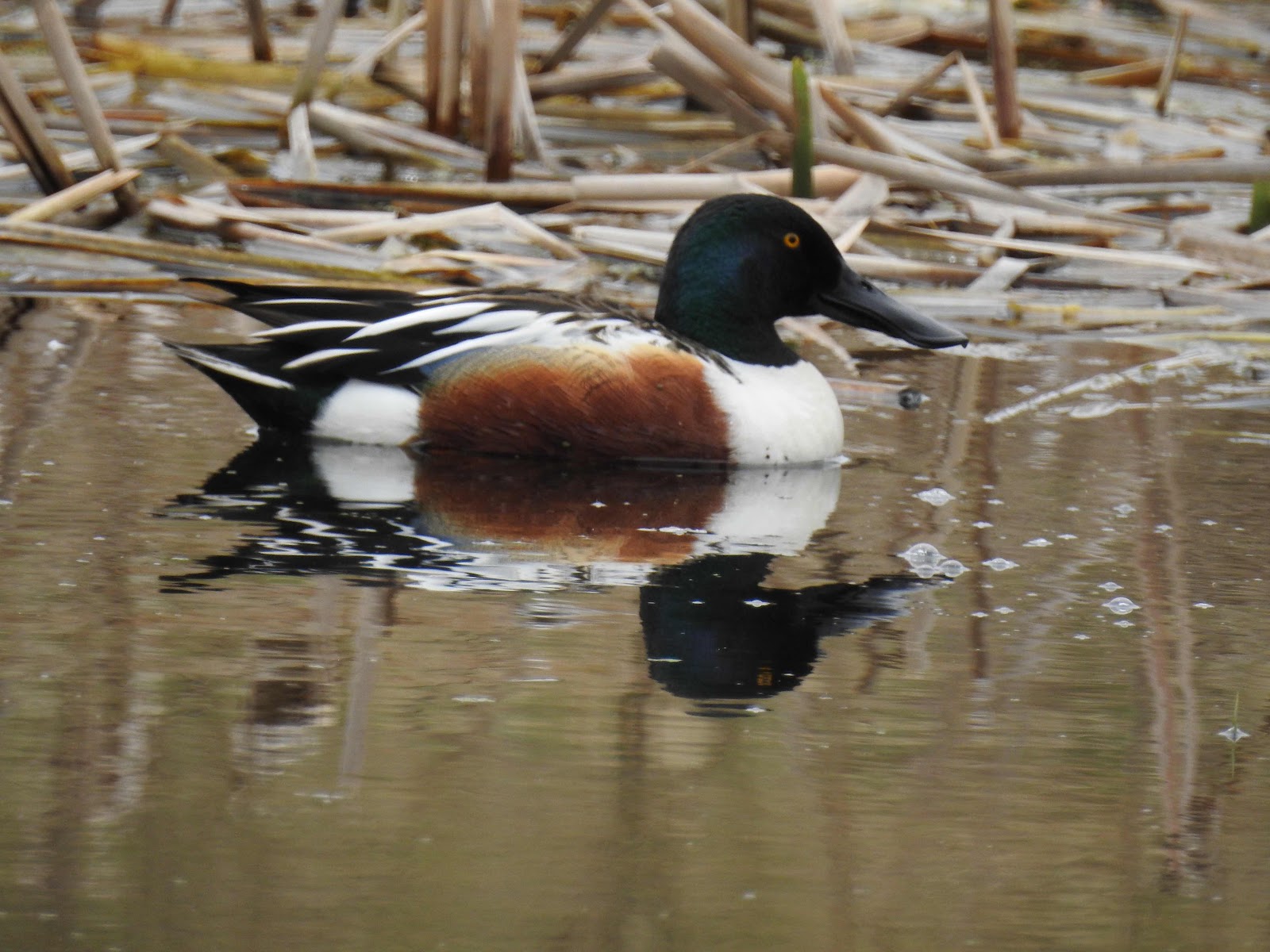 The female has a similar shaped orange coloured beak and brown plumage which looks like it was hand painted around the perimeter of the feathers. 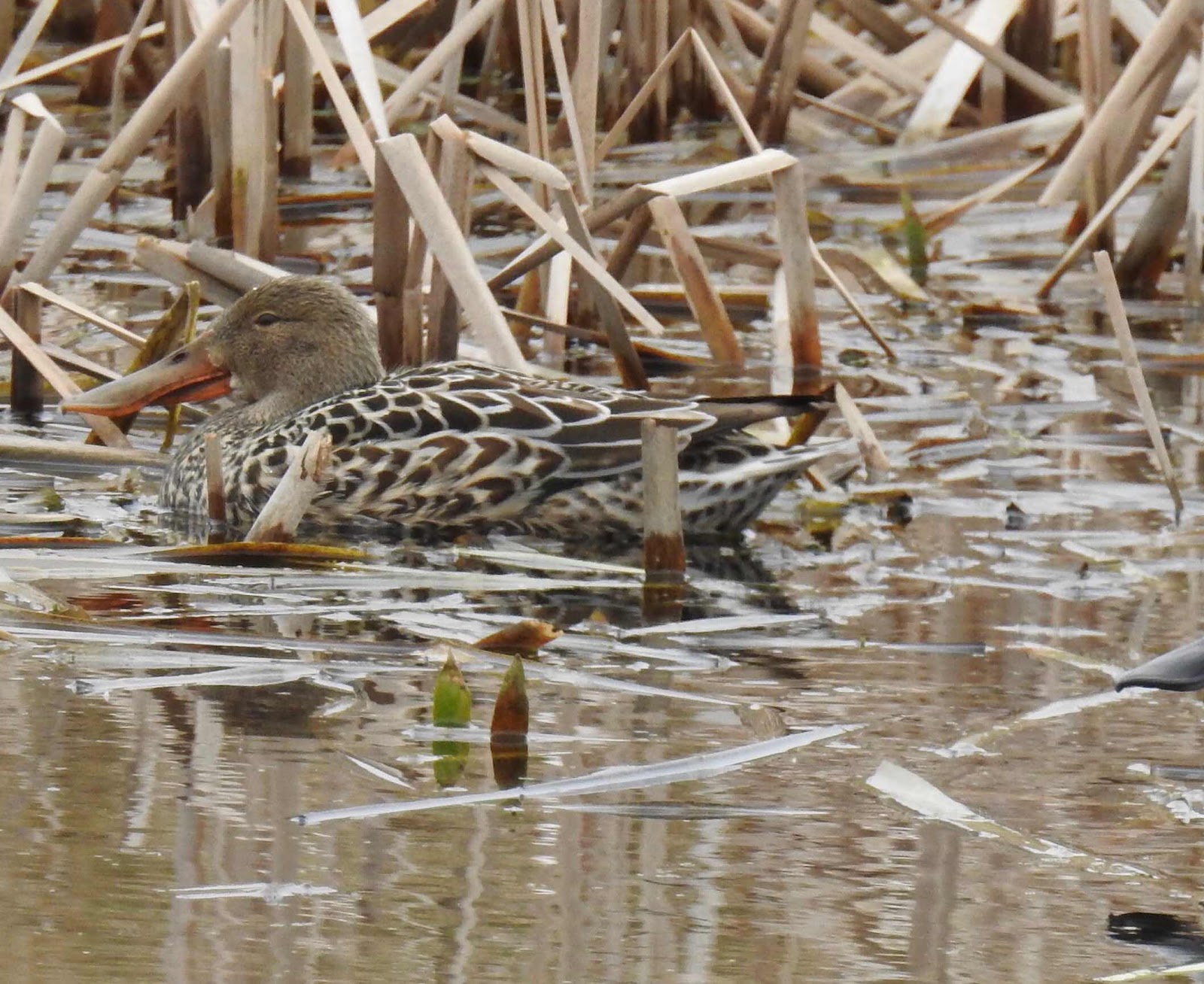 A pair of Gadwalls also shared the pond. They were more shy than the shovelers and were harder to photograph. The female’s feathers are similar to the female shoveler. 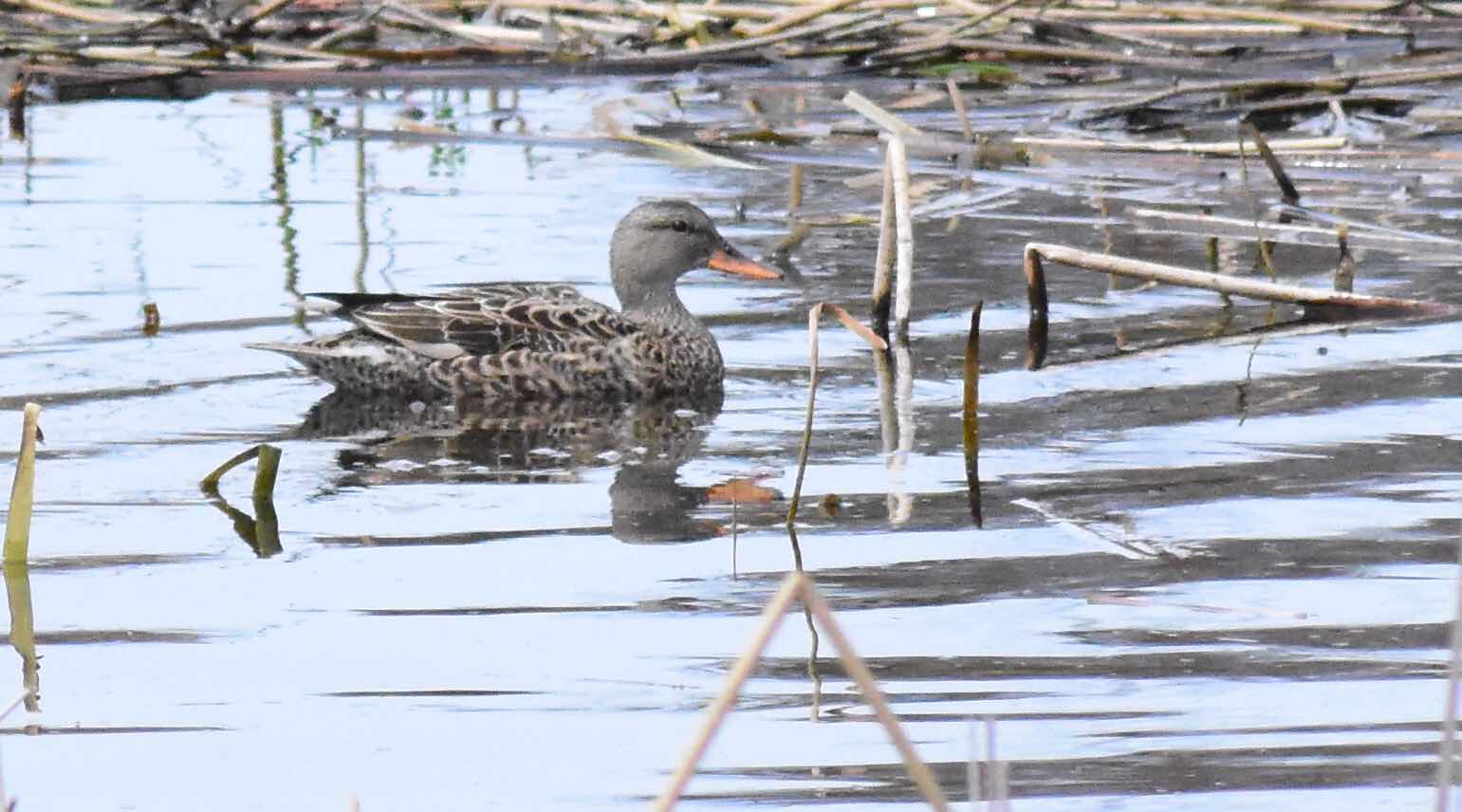 The male is more distinctive with fine patterns and blocks of colour such as grey and black. 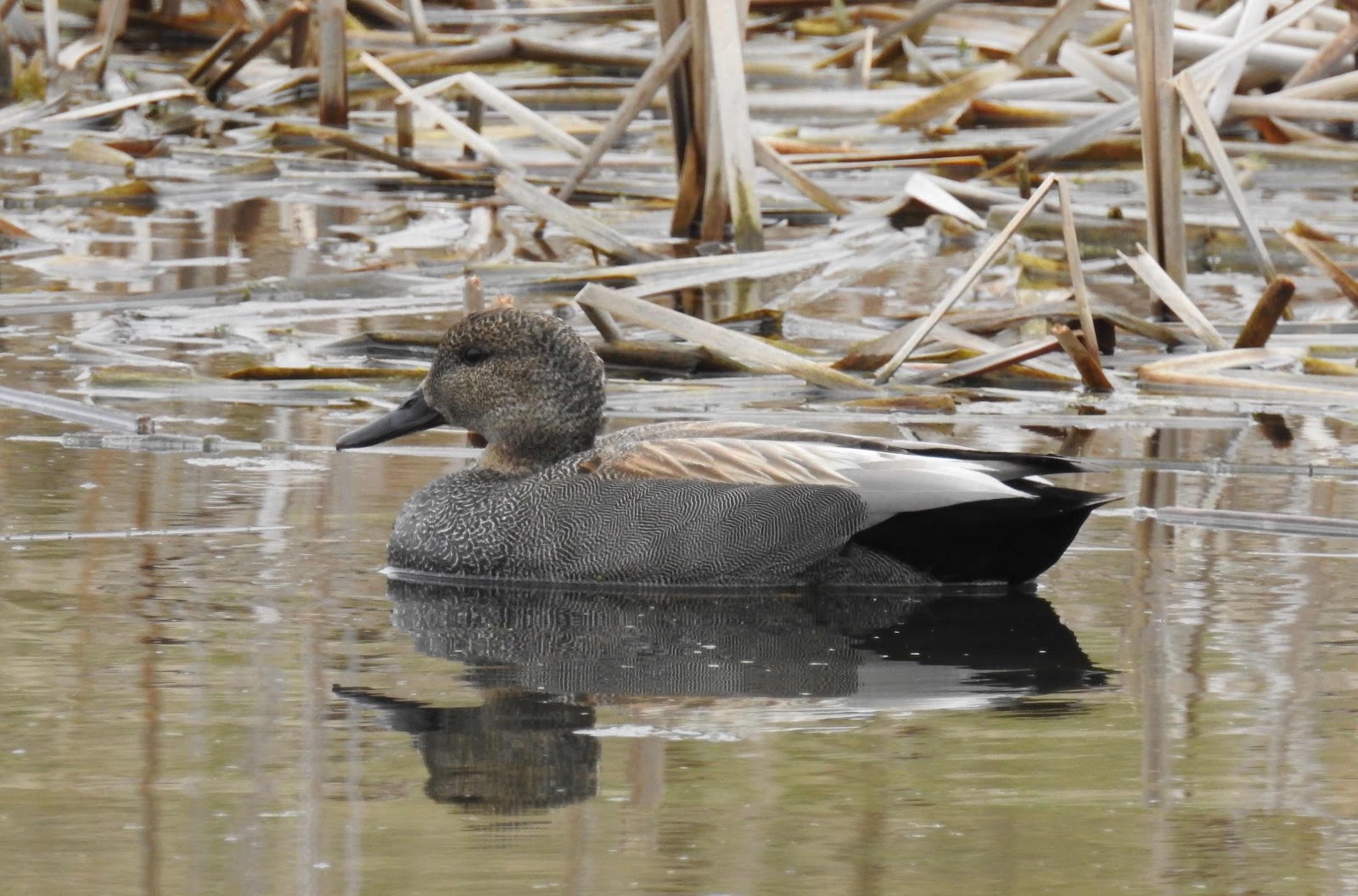 On an island in the pond, a goose sat on her nest. 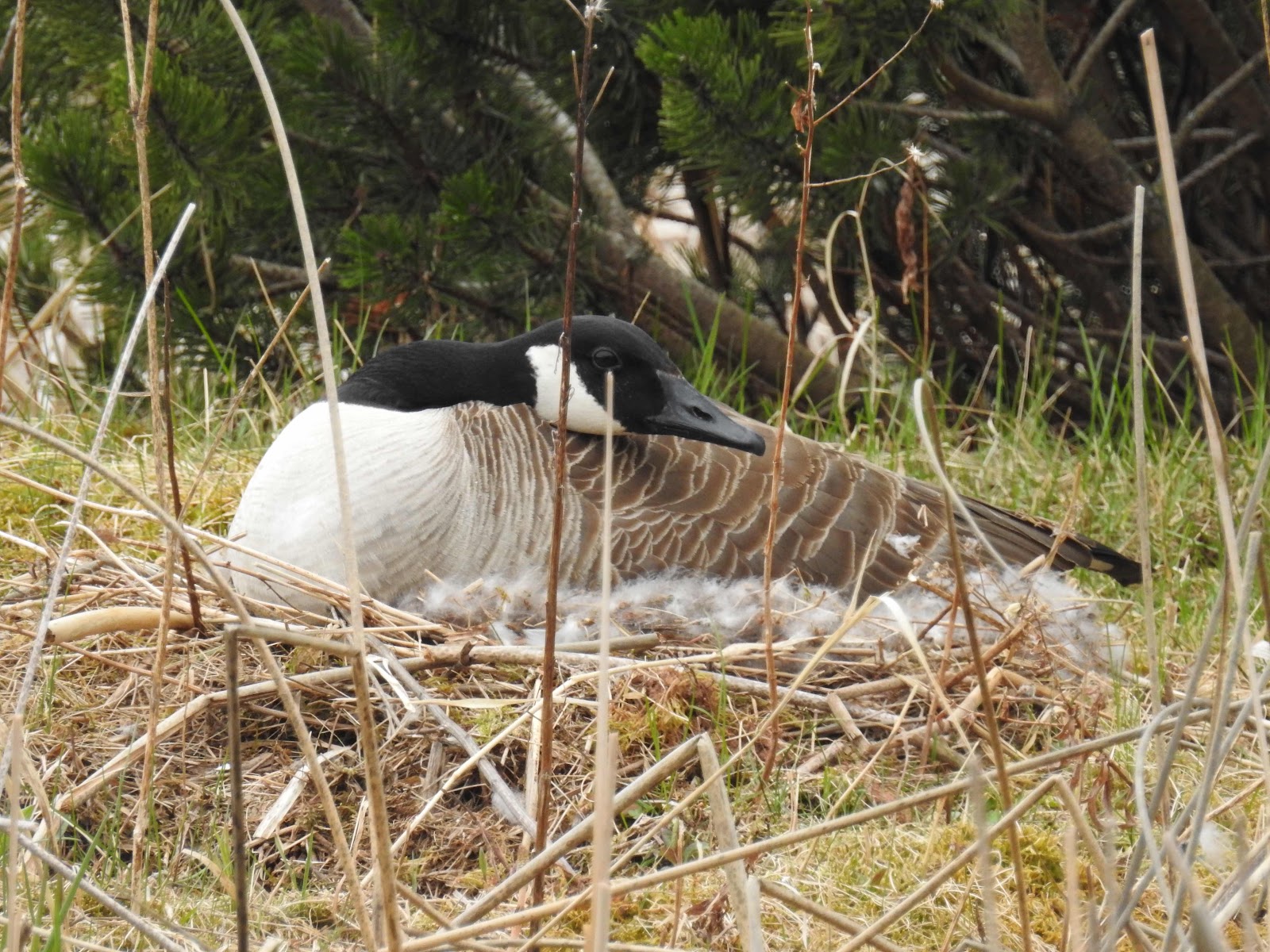 We guessed the bird nearby was the gander. He stood sentinel duty, barely moving a muscle. 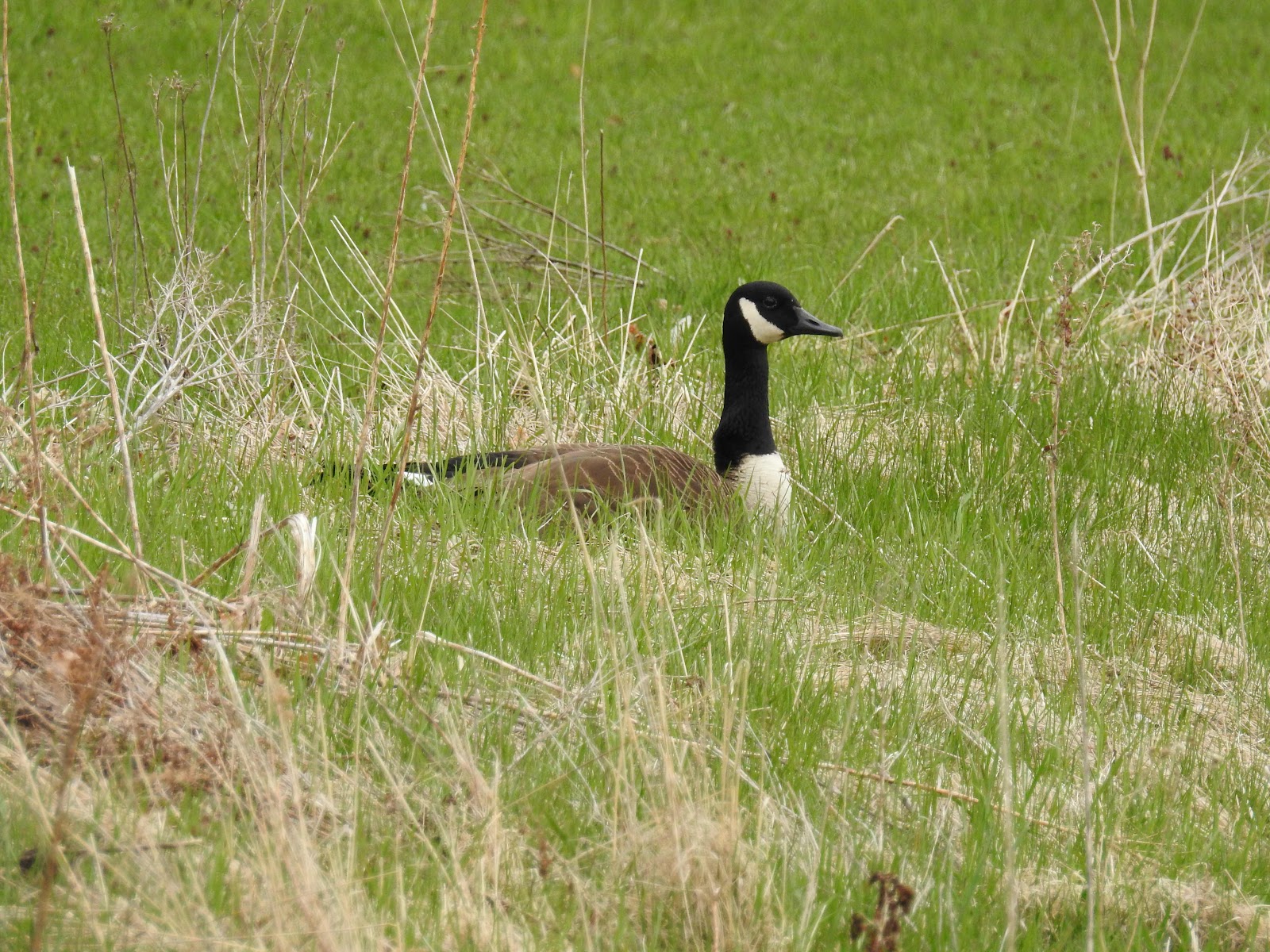 Later, after our walk through the Dunelands down by the beach, we walked past the gander and he hissed at my husband and me. 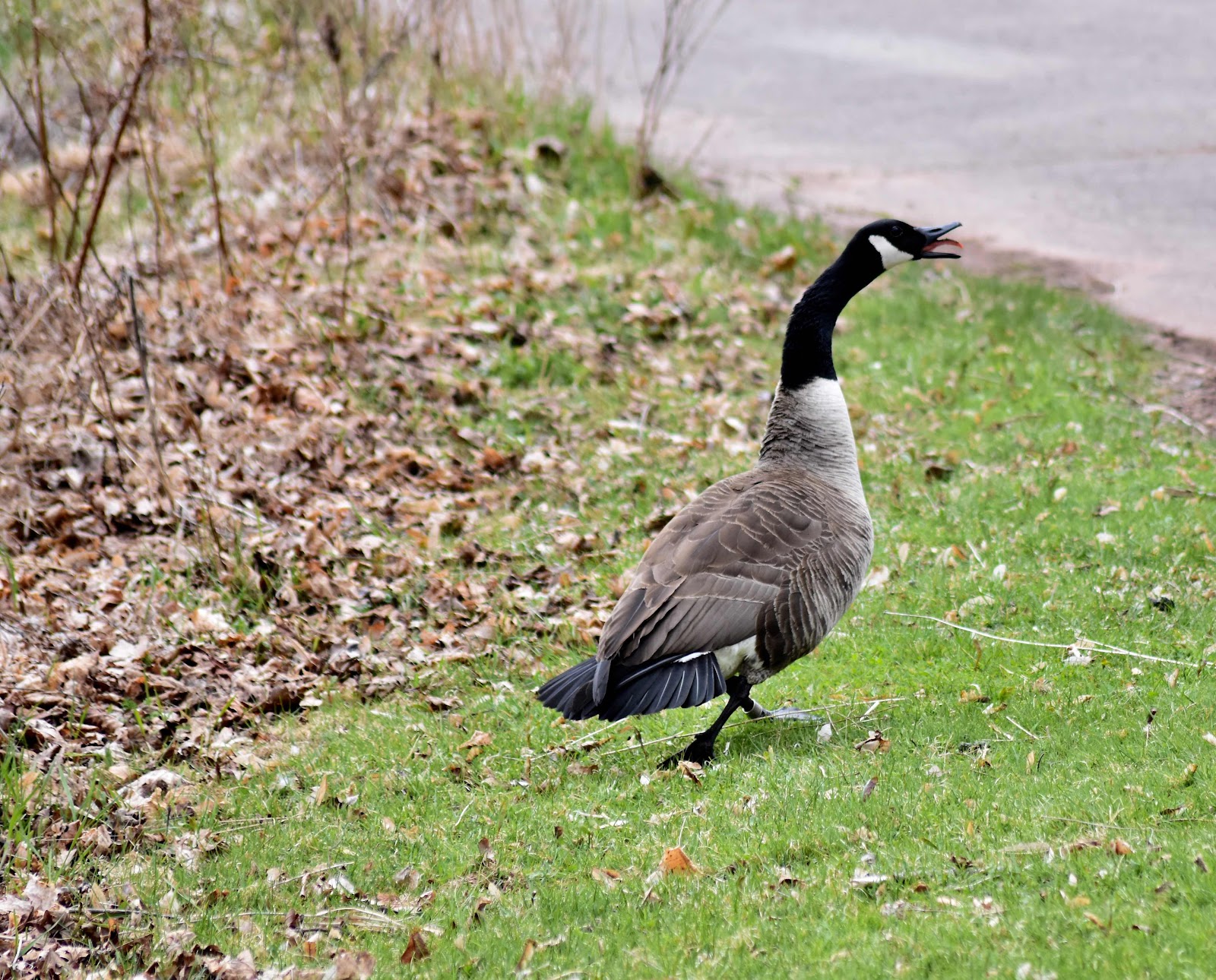 It was our first encounter with a hissing gander and we hadn’t approached or threatened him.

Two other geese were nearby in the high grass. They didn’t bother with us.

We plan to go back to see the little avian community in the Grove soon, hoping to see ducklings or goslings.

I have been hissed at when I got too close. I no longer get very close. :)

Those are beautiful birds, and you got some great shots. I love the male gadwall coloring especially. Thank you for sharing these lovely critters with me. :-)

Great birds. I think another reason to love Cavendish Grove, aside from its fabulous fowl, is because the name charms and beckons me in.

what a GLORIOUS life swirling around you dear Marie :)

I have been hissed at by a black swan Marie but not a goose. Beautiful shots of these handsome birds 💙

I love how well you know the birds you see Marie, I learn something each time. Been chased by a hissing gander in our parking lot here, ha ha. I ran away :-) They moved on however, must have been lost.

Sometimes a goose can be quite irritable, other times not so.

All three species are a fairly common sight here, though only the first two are native to these shores. I'd always thought of Canada Geese as being rather more peaceable than most geese and I've never been hissed at by them. The word to describe the patterns on the male Gadwall's feathers is "vermiculated" - a good word to drop into conversations!

I too have been hissed at by a swan - and apologised and moved further away.
Love the birds you show us. So much.

Beautiful shots of the birds, Marie. Be careful of the hissing gander, that must have surprised you.

The markings are so incredibly intricate. Yes, please go back and share more photos with us.

We have a lot of Canadian geese here, and not many ducks. I enjoyed seeing the variety of ducks you have there! Your knowledge of them is wonderful! We expect to see little goslings very soon here too :)

Beautiful shots of the waterfowl. I am always amazed at the subtle yet distinct colouring of wild birds.

Beautiful ducks. The geese, not so much. Shame on me.

You captured them very well. Great shots. Geese can be quite intimidating. : )

I love to see pictures of ducks and those breeds are new to me. Hahaha. I can just hear that goose hissing. My great grandmother had one when I was a child. I don't remember it but my mother said they would chase the children around. I guess they were partial to grandmothers.

I suppose even if the chicks aren't yet hatched, the gander is still protective of them, right? How wonderful is that! Great post, Marie.

Looks like you had a good outing and took some really nice pictures. Hissing...telling you to keep your distance I guess. They can be quite aggresive.

Wonderful bird pictures! I worked a job that had a small lake as part of the landscape. Ducks were attracted to the beautiful area. Every spring we were entertained by many many new duck families. It was a joy to watch.

I really appreciate that you can name these waterfowl and that your photos are so clear - it helps me know what I'm looking at here! Great photographs.