Everything is ready and waiting. Setting day, first day of the lobster season, was planned for April 29th but the wind was prohibitive. It continues to be. Now the earliest day is Thursday. Meanwhile the boats are tied up by the wharfs 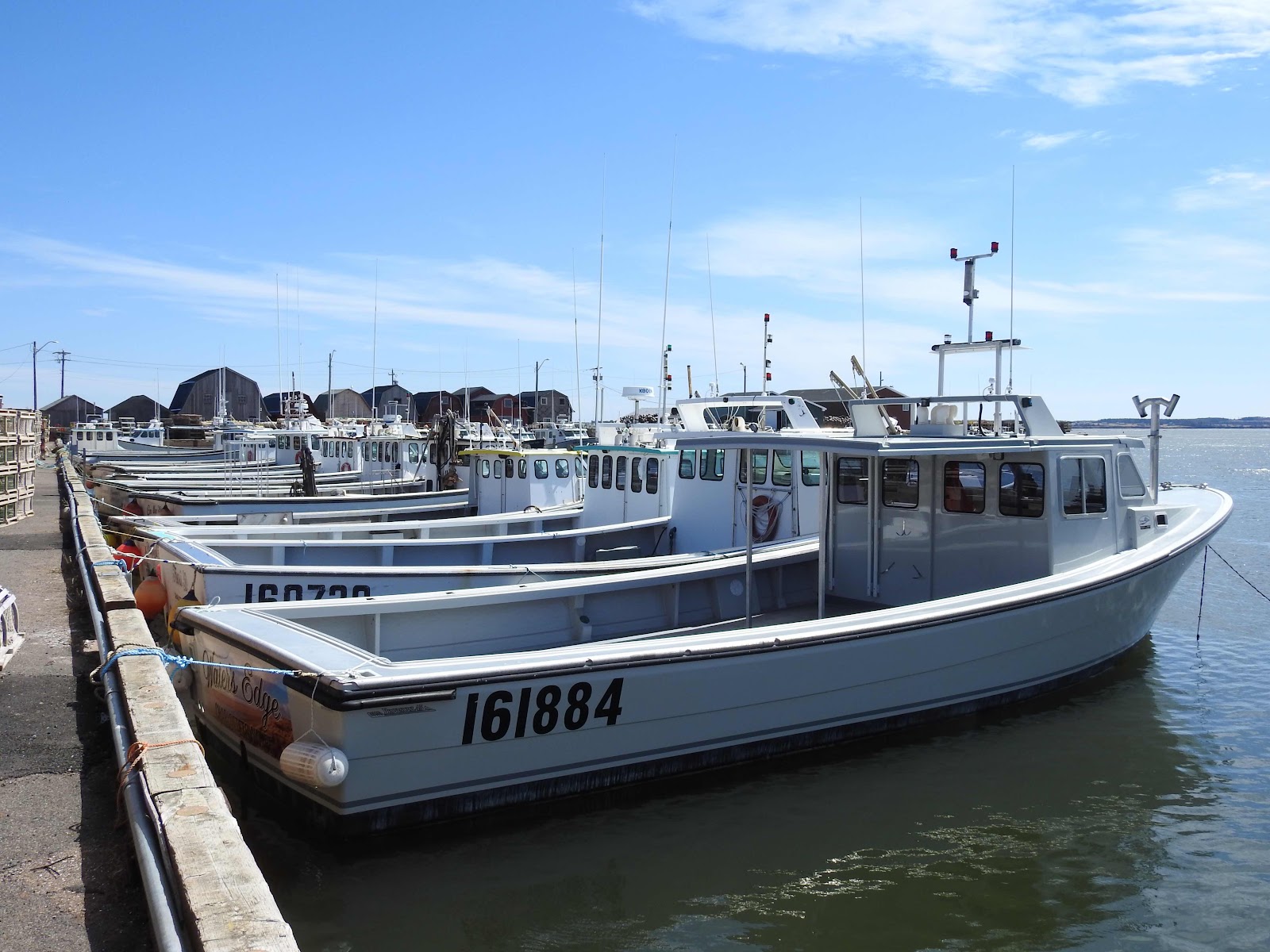 and the traps stacked behind them, ready to be loaded on board. 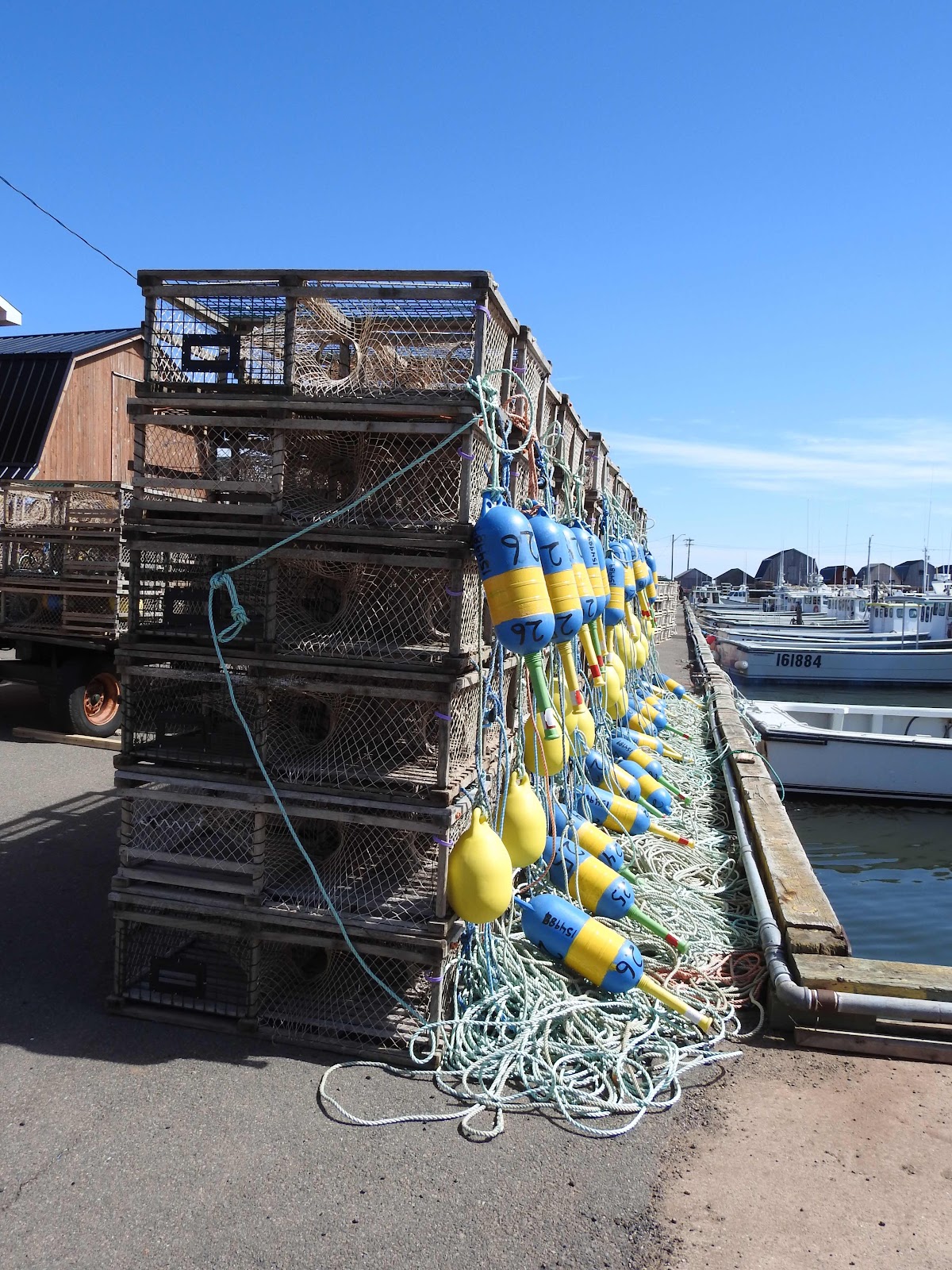 My husband and I visited two ports. At Malpeque, the scene was consistent with other ports around Prince Edward Island. The traps, ropes, buoys and boats all show the work which goes into the preparation for the season. 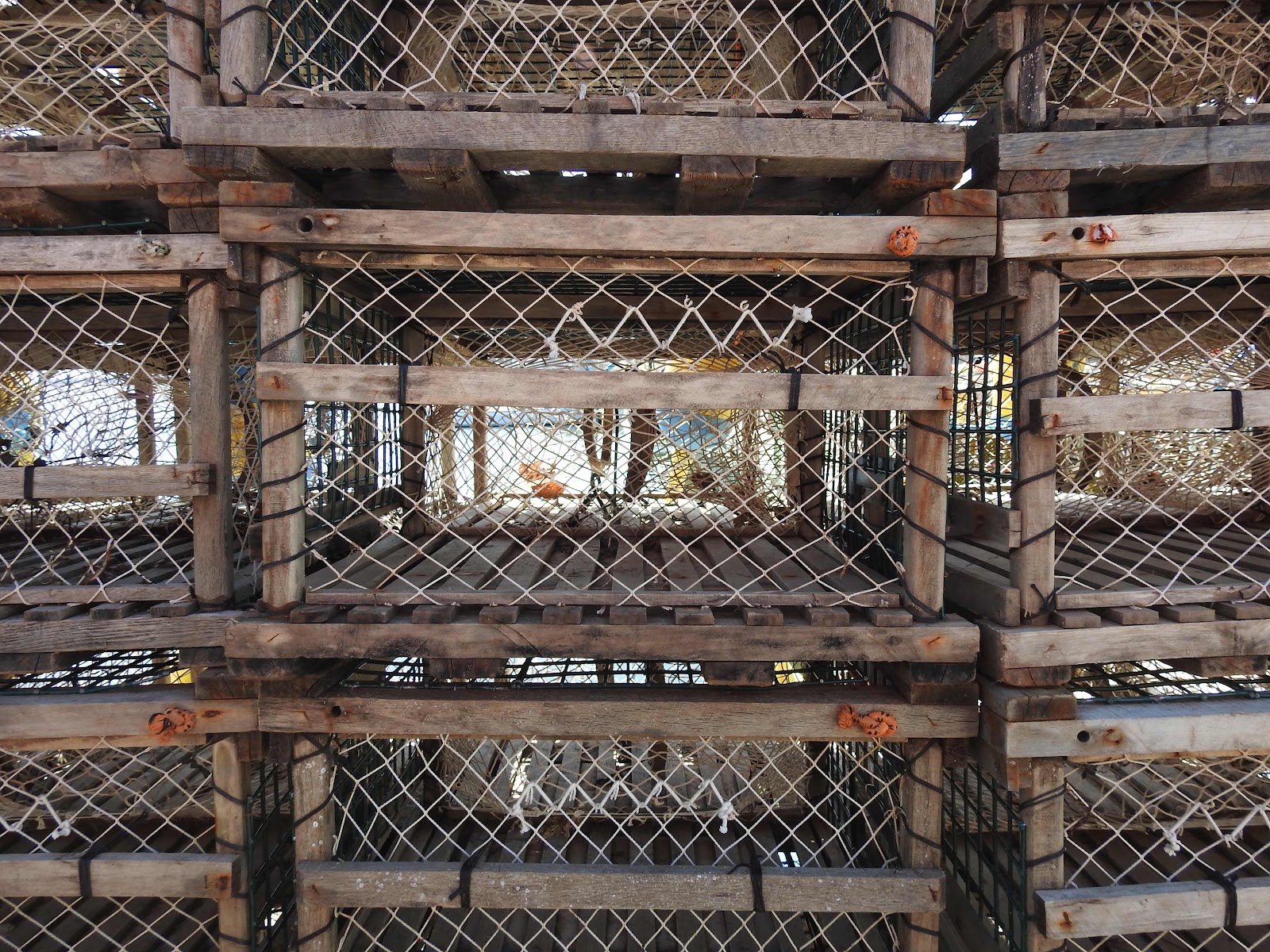 At French River, a smaller fleet of boats is tied up, waiting for traps to be loaded once the season is a go. 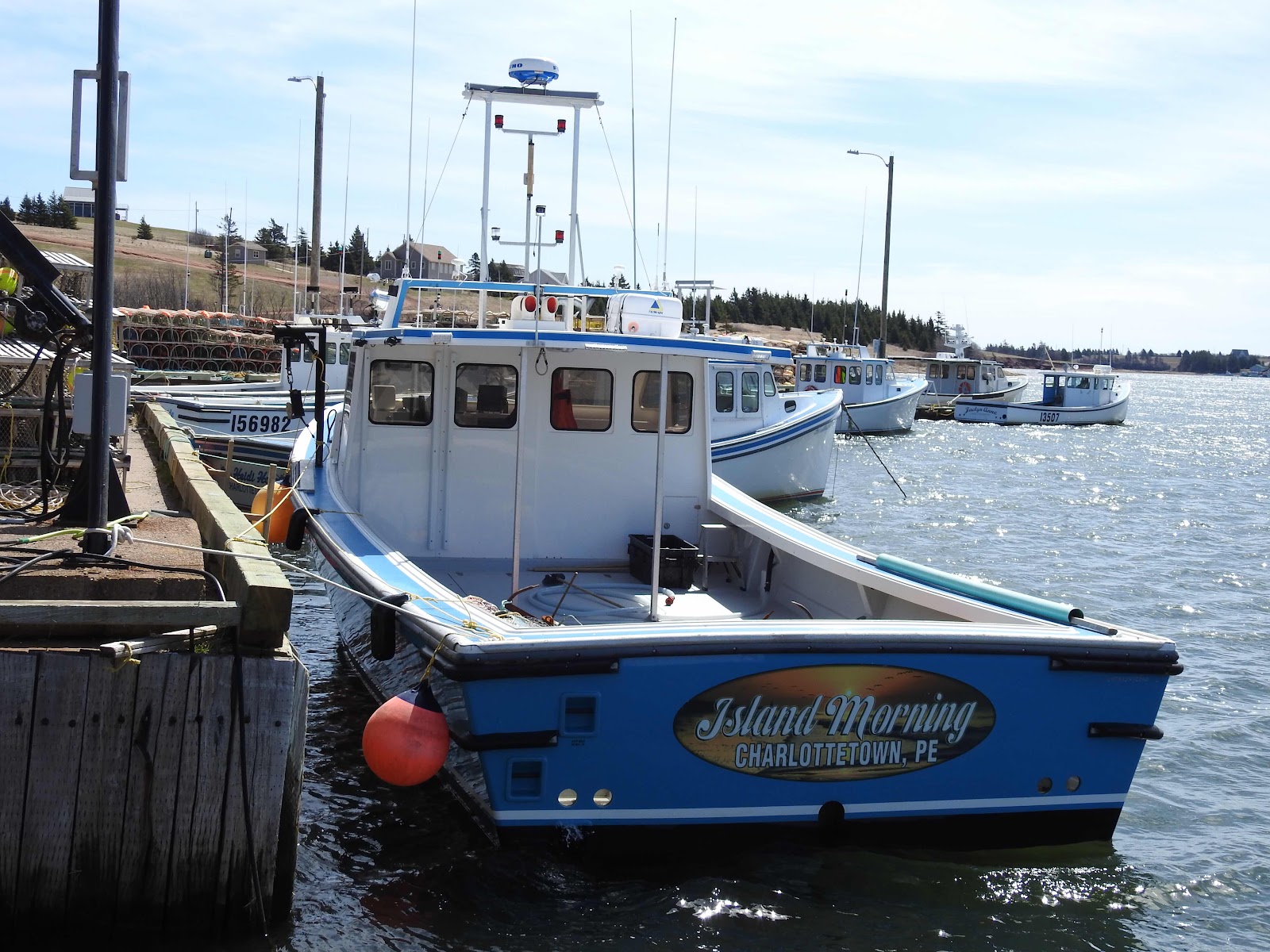 While they are not deep, the boats are wide, able to hold dozens of traps, stacked on each other. 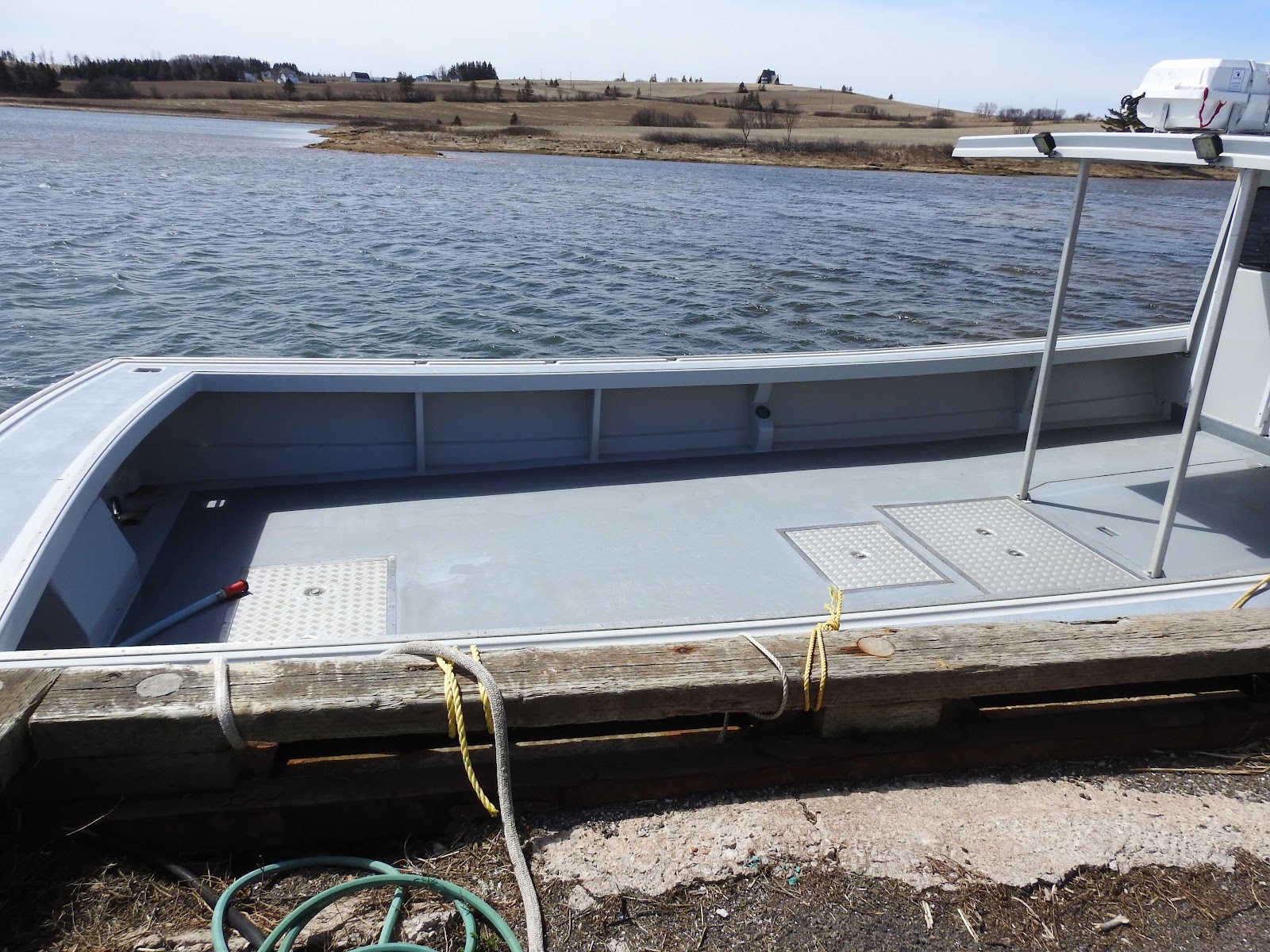 The Knot Inarush and its gear are rearing to go. 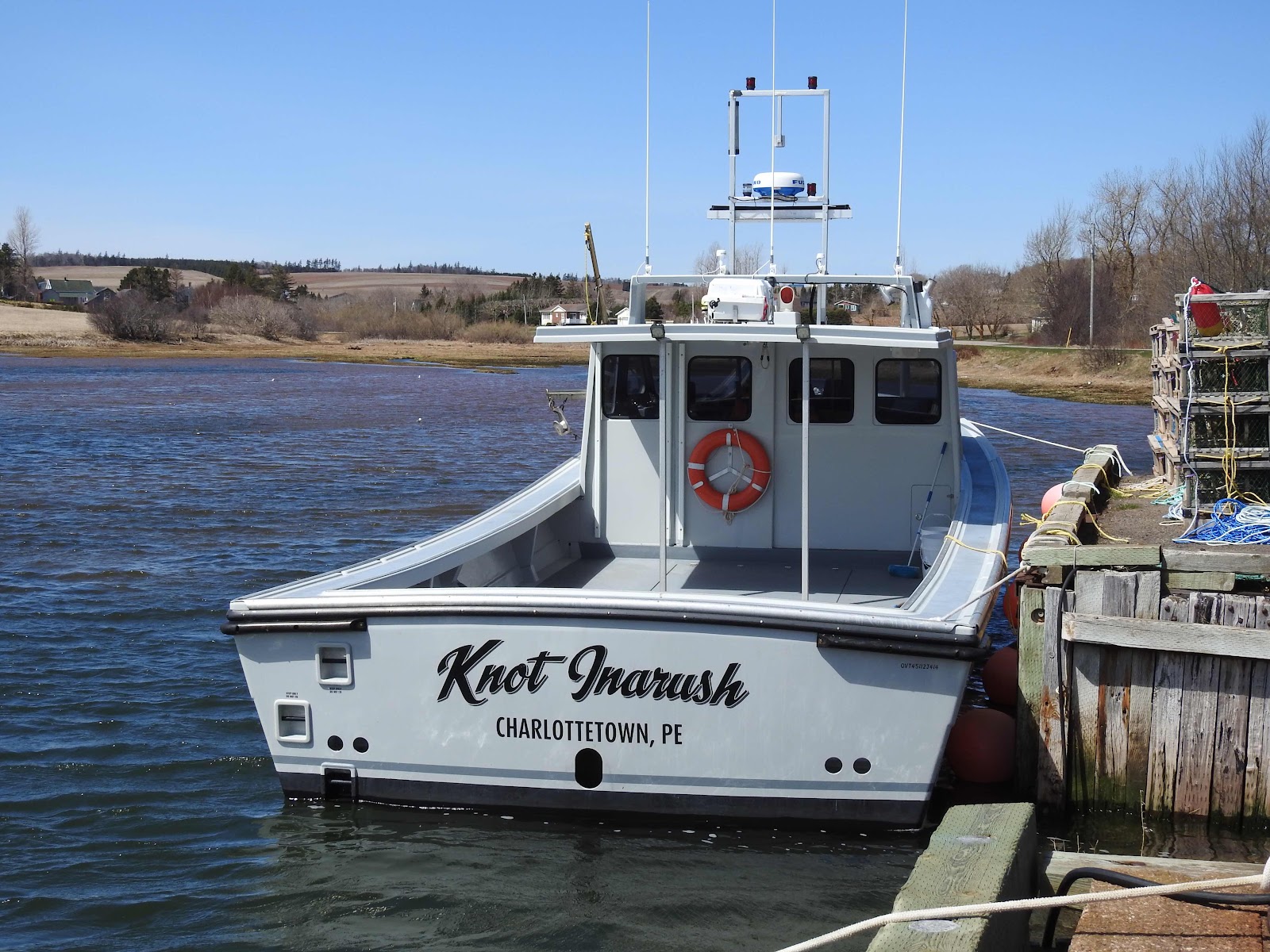 On the hill overlooking French River, the scene stretches out before us. 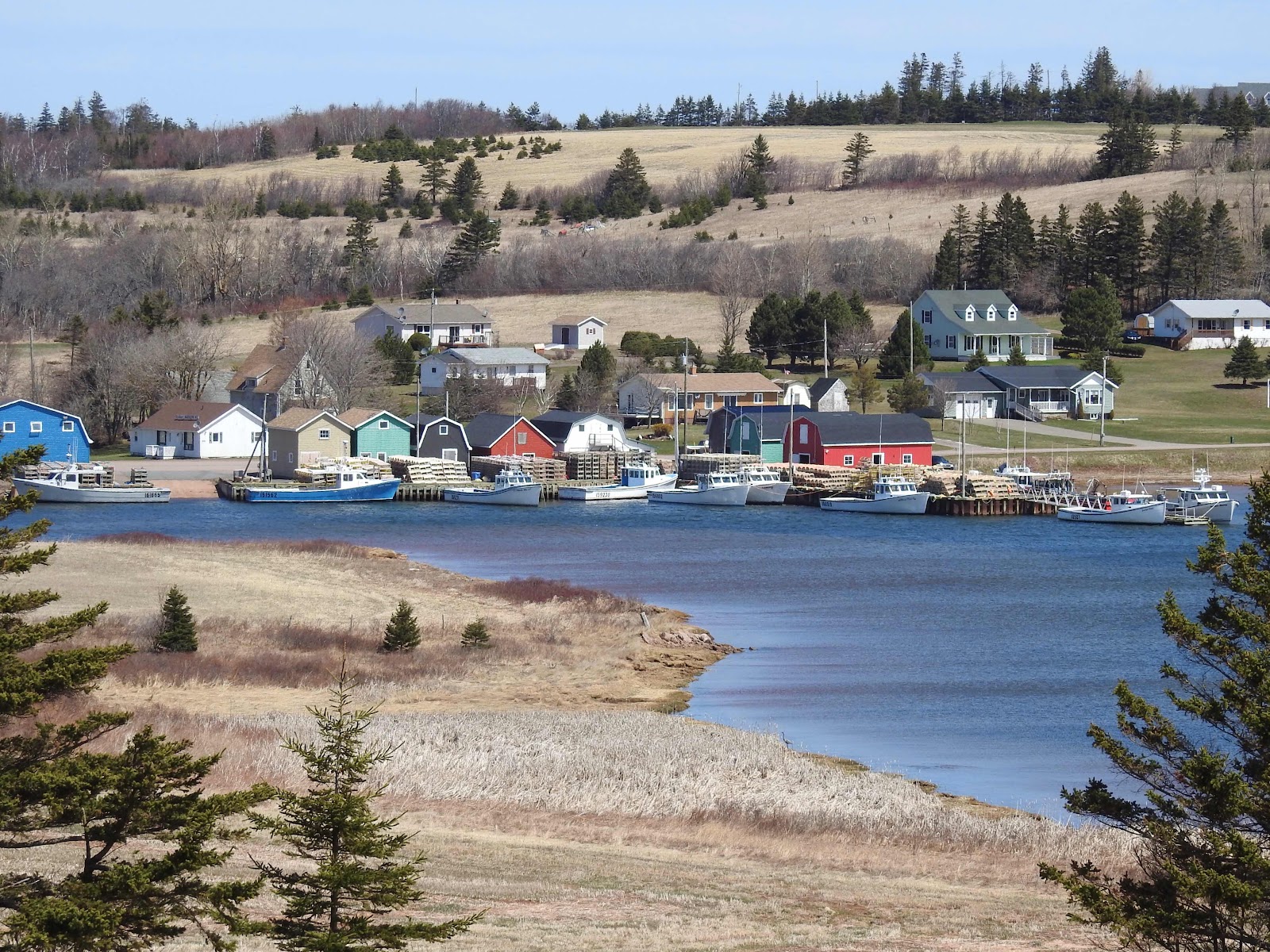 The yellow fields are moments from green, as are the trees, waiting for nature to do her magic. The Knot Inarush is in the left of the photo. It doesn’t matter if we R Inarush for lobster. Nature is in charge.

May everyone have a great lobster season!

What a clever title for a boat. Love that harbour front in the last photo.

I love seeing the preparation. Very colorful and interesting photos.

The boats look ready to get started.

It's Wednesday now, and I hope the start of the season went well. Wonderful pictures. Thank you.

Nature is ALWAYS in charge. On this side of the world it is a calm Thursday. I hope yours follows suit.

Let's hope for a great lobster season. Beautiful photos, I love the view of the last photo, it's very pretty.

So much anticipation Marie, can almost imagine the starter firing his gun and the lobster fishermen leaping onto their boats and off! Except Knot Inarush, he would be very casual about it 😊 Looking forward to seeing that last shot when the hills are green.

I am so happy to have found this blog. I already realize that I will be learning about a different part of Canada than where I live. As the saying goes, never too old to learn.

Such a pretty village. I think I smell salt water (I wish). May their season be good.

I read about lobster season on PEI. One or two more days...
I love lobster!!! I can eat a whole lobster all by myself!!!
: )

So nice and organized. Makes me want to jump on board and watch a good days work.

Now that my sister has just moved from Michigan to Maine, Marie, I am really loving your posts about the seasonal changes because of your proximity to her. We plan to visit her in October and are really looking forward to lobster rolls. OMG. I can hardly wait! :)

Interesting post, now Thursday here so maybe all is underway I guess. Have a good day, Diane

Wonderful wonderful pictures as always - you are so lucky to live in such a beautiful place.

"Knot Inarush" joins "Sloppalong Placidly" and "Cirrhosis Of The River" among my favourite boat names.

Everything is ready to go, and the feeling of springtime permeates all your pictures and text. Spring has come to PEI. :-)

beautiful pictures...i especially loved the view of the french river!! i am thankful to all the fishermen, i am a lobster lover!!!

Nope … you can't be Inarush as far as nature is concerned. She goes at her own speed and you've captured it all beautifully.

Oh Marie, these photographs are beautiful.
Hope the fishermen's catches are good.