The port was busy with boats returning with the day’s catch. We watched as they sped through Alberton Harbour, past the old lighthouse, now privately owned, 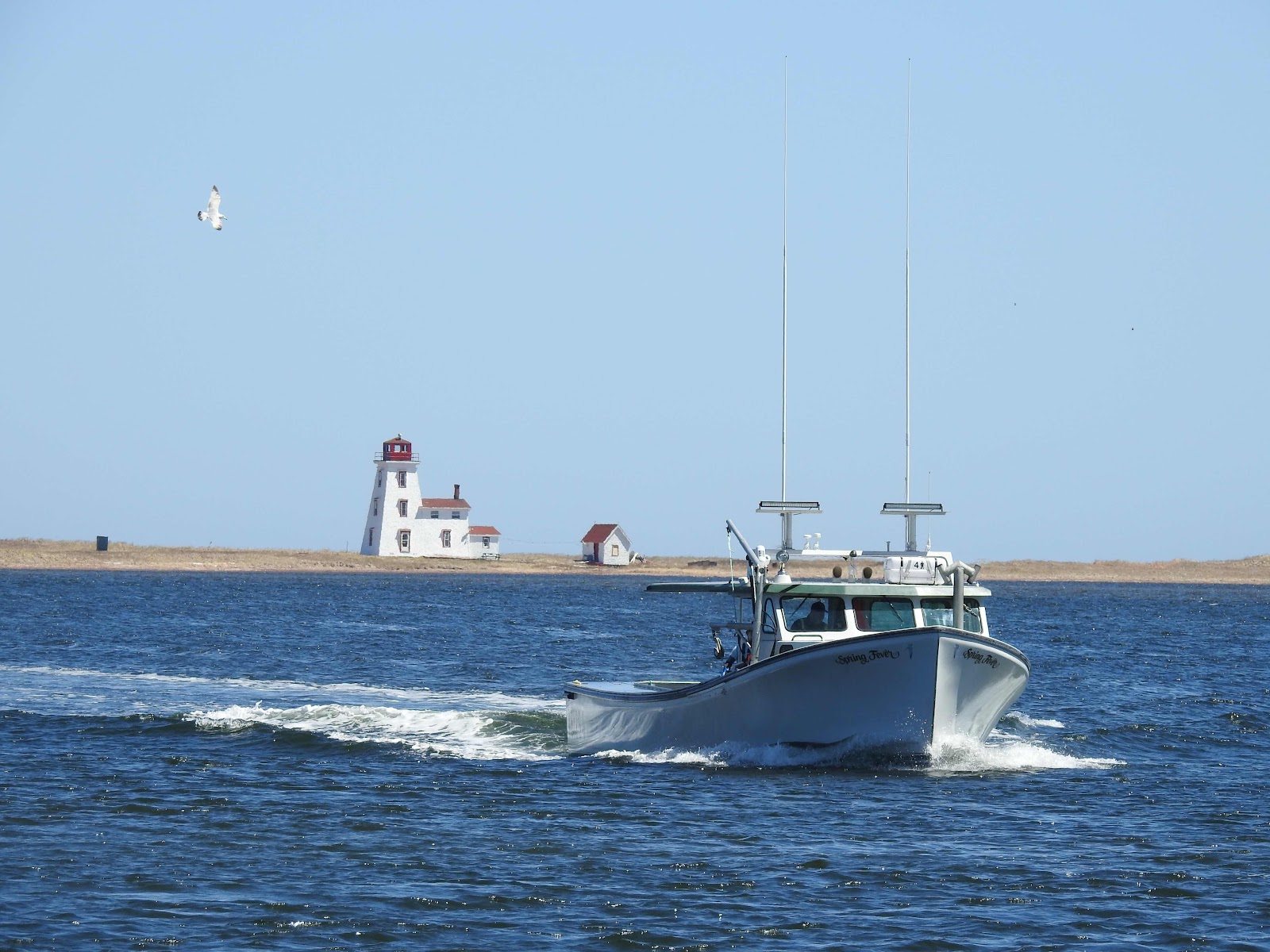 and slowed as they neared the entrance to the boat pond. 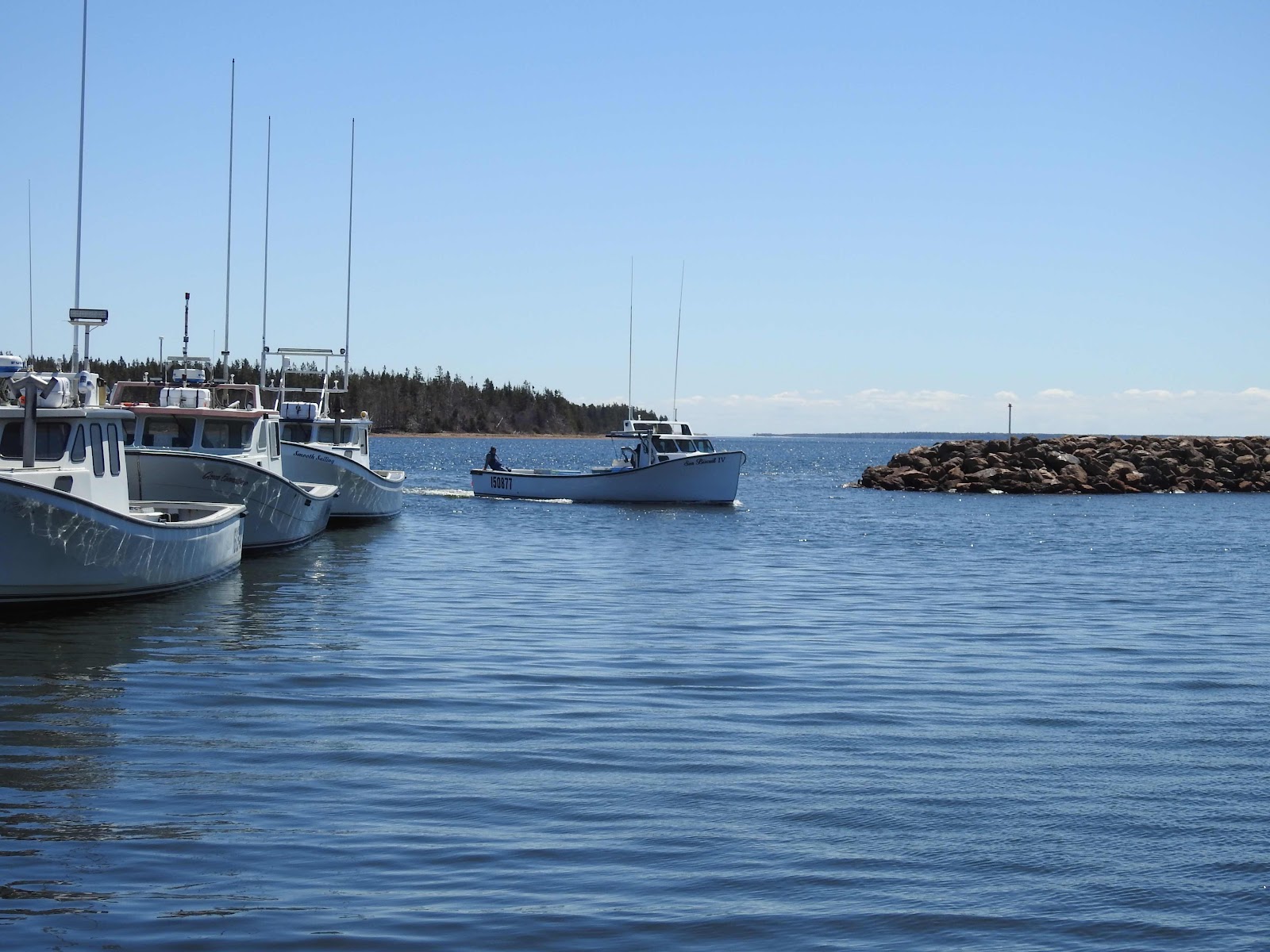 each boat tied to its berth at the wharf and unloaded the catch. Lobster doesn’t come any fresher. 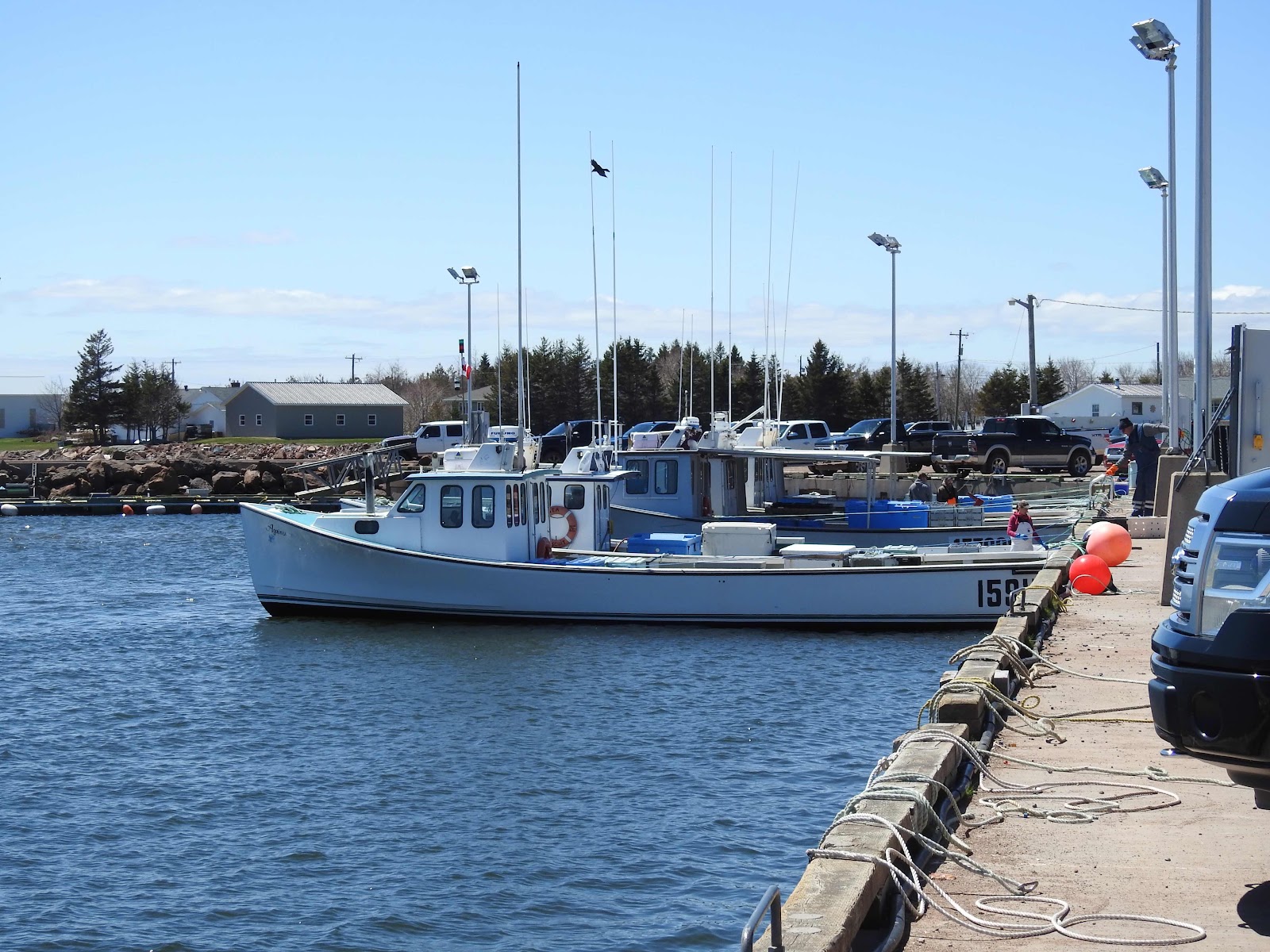 The fishery is highly regulated and monitored on Prince Edward Island to ensure its sustainability. A Fisheries and Oceans vessel launched 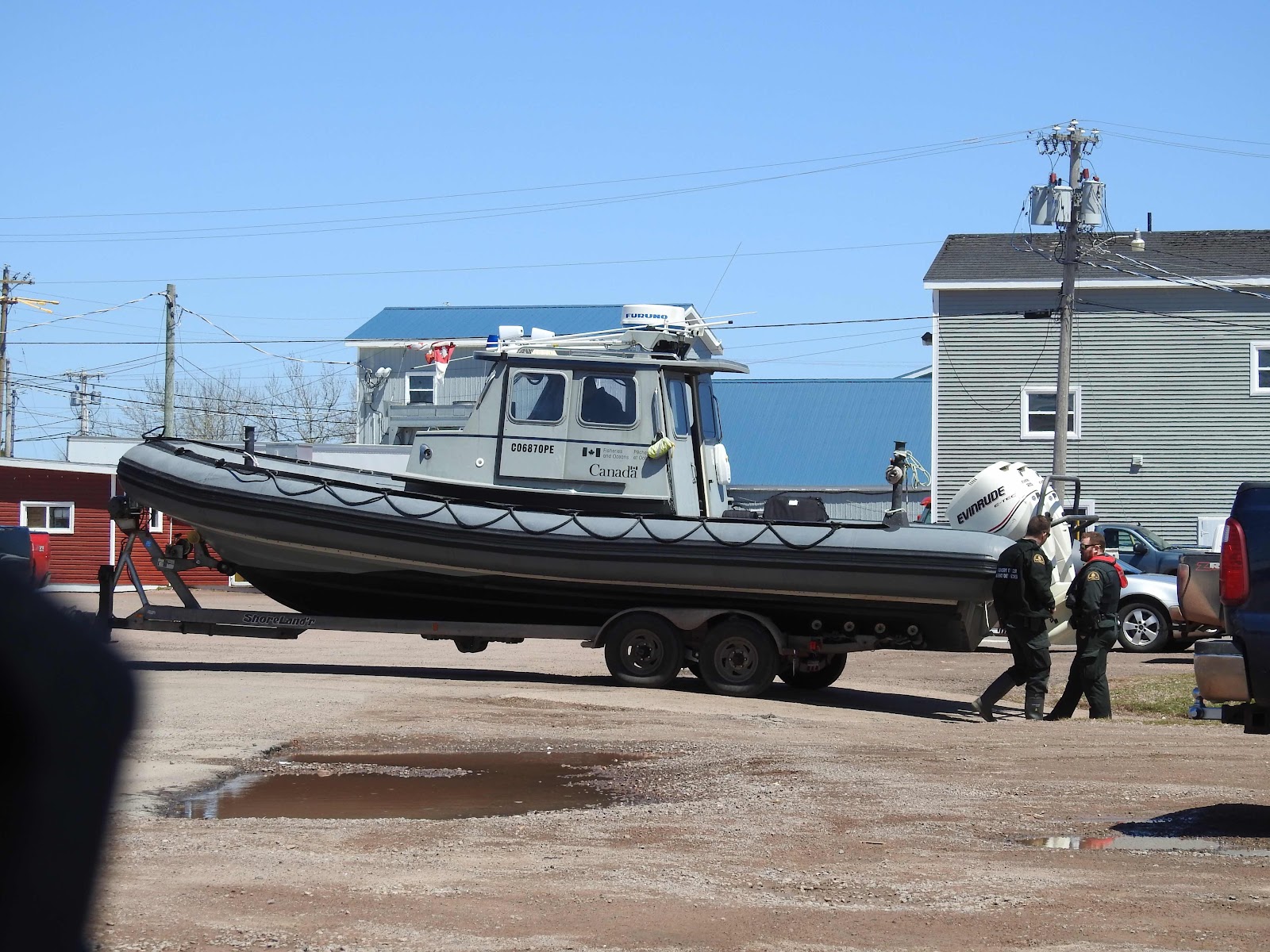 while we watched and headed out to the fishing grounds. 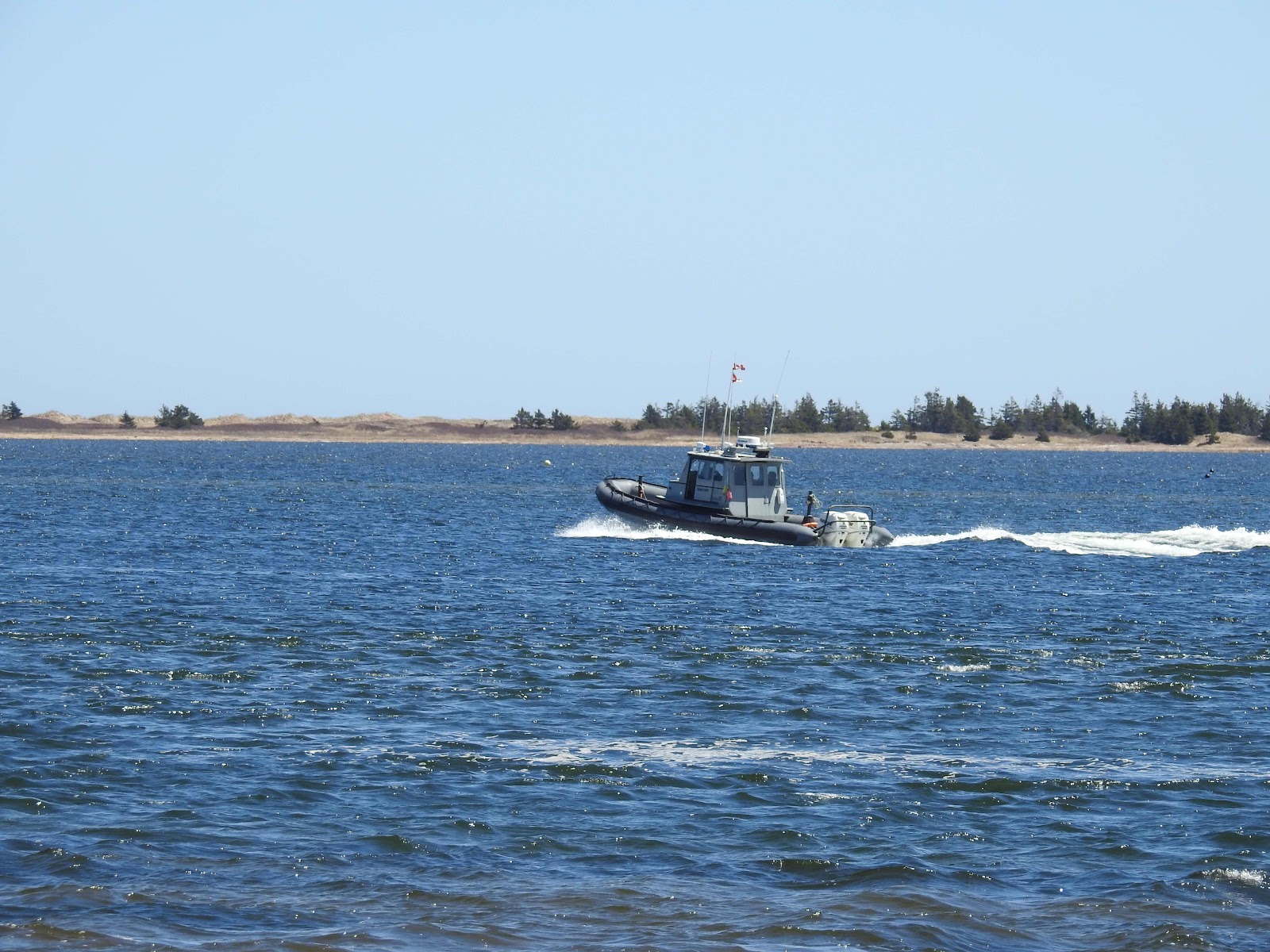 It was a sunny day, though cold enough for winter clothing. Nearby, on a sandspit, my husband and I had our picnic, using the car as a windbreak. Two vehicles were parked nearby. While we ate, a small boat pulled up and two oyster fishermen came ashore to have lunch in the warmth of those vehicles. 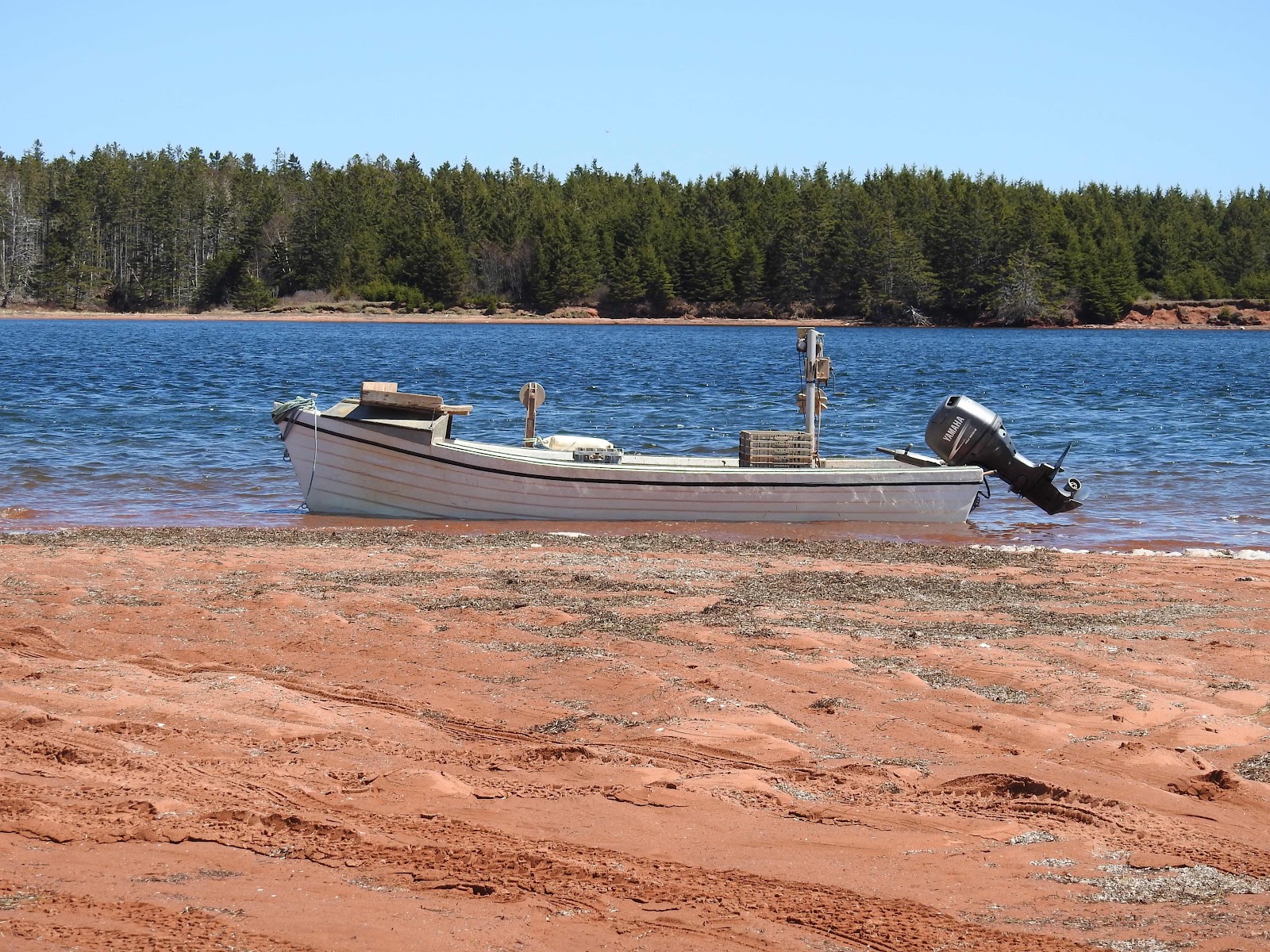 It was too cold to eat in the boat on the water.

Nearby, a Greater yellowlegs was unperturbed by the cold or the activity on its little stretch of sand. It waded around in the rising tide, calling out to its friends. 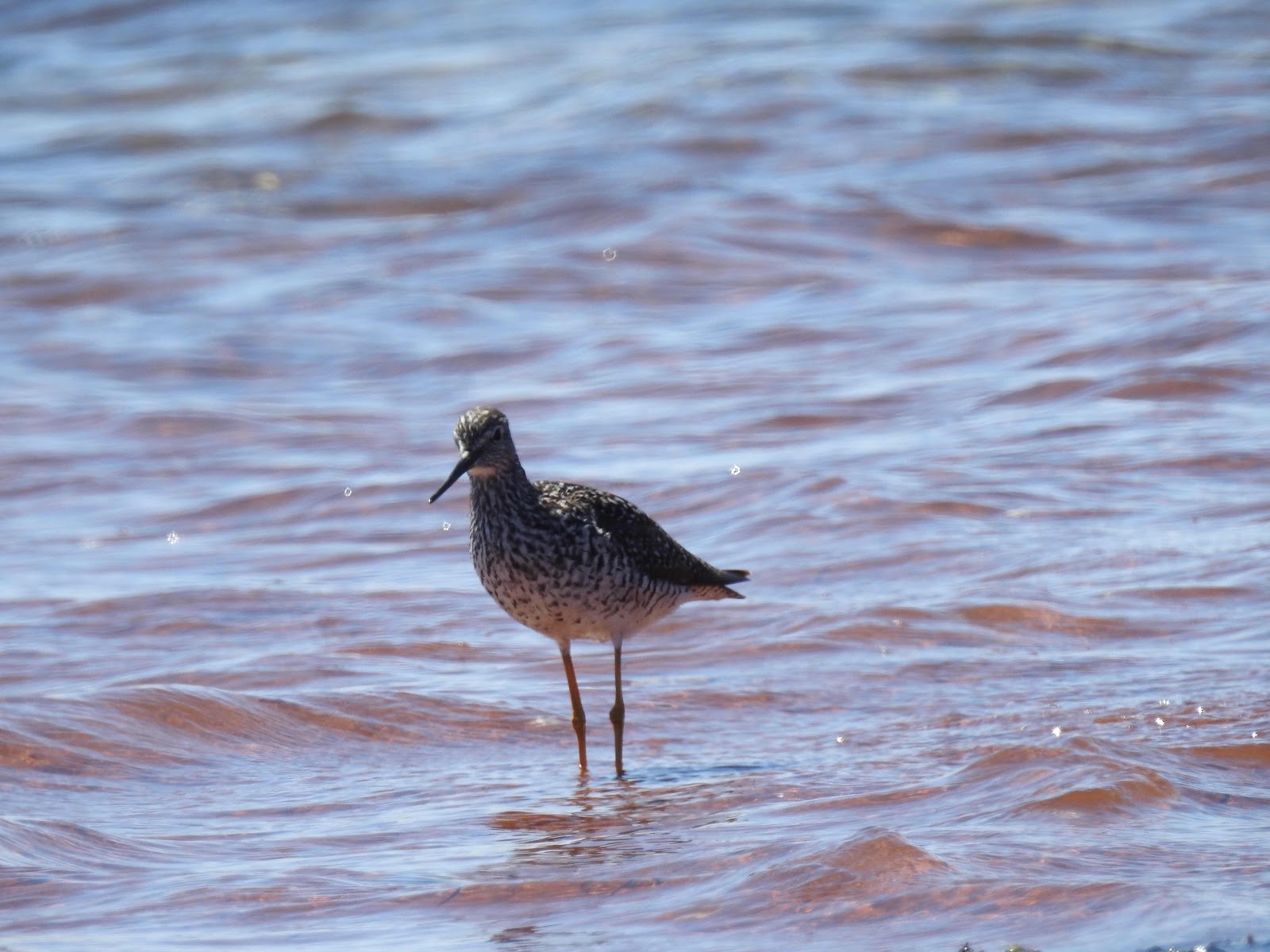 That day, we watched the interaction of humans and nature as it unfolded around us and relished every minute.

Thanks for the account of the comings and goings.

Harbours are the most interesting places, it's such a pleasure to see the goings on in your fishing harbour Marie. Isn't it amazing that however cold it gets the birds are like eh what's the problem 😀

It sure didn't look cold, but sunny and delightful. I am glad to learn that the lobster fishery is being watched for sustainability. I enjoyed seeing those bright and beautiful skies. :-)

Spring, through your lens, brings me a lifted spirit. I've said it before but I don't think I could survive your winters. All that but isn't spring sweeter because of the cold? I think it is.

What a perfect kind of day for the two of you.

What an interesting day you had and all that scenery makes it a beautiful day indeed.

Just beautiful. Truly lovely and thank you so much for taking us with you.

The water is so incredibly blue in your pictures. The water we see around Texas is dirty from pollutants or sand, I don't know which. I remember my first trip to Florida I was amazed at the color of the water but it wasn't the pretty blue you have, more green blue. I wonder if it has anything to do with the freezing and thawing process. Whatever the reason, it is gorgeous. I've been trying to think of places to go around here for lunch excursions like you take. I'd have to go pretty far for lakes and parks but once you get an idea of something you want to do surprising things will start coming to you. At least I'm hoping so.

These are such cool experiences. This is all a foreign world to, who lives on the prairies.I do enjoy seeing the pictures and hearing about these adventures.

Such a lovely day.

Beautiful photos. IT is good to remember that the car can be useful too, not just being outside! Andrea

What a beautiful place.
The fresh air and the ocean!
I like your header. You live in a pretty place.

I would relish every moment as well.

You are so very close to nature where you live. You are very lucky!