Out of the blue

A NASA photo recently posted by Canadian astronaut, David St. Jacques, shows how the red soil and sand weep into the water around Prince Edward Island. 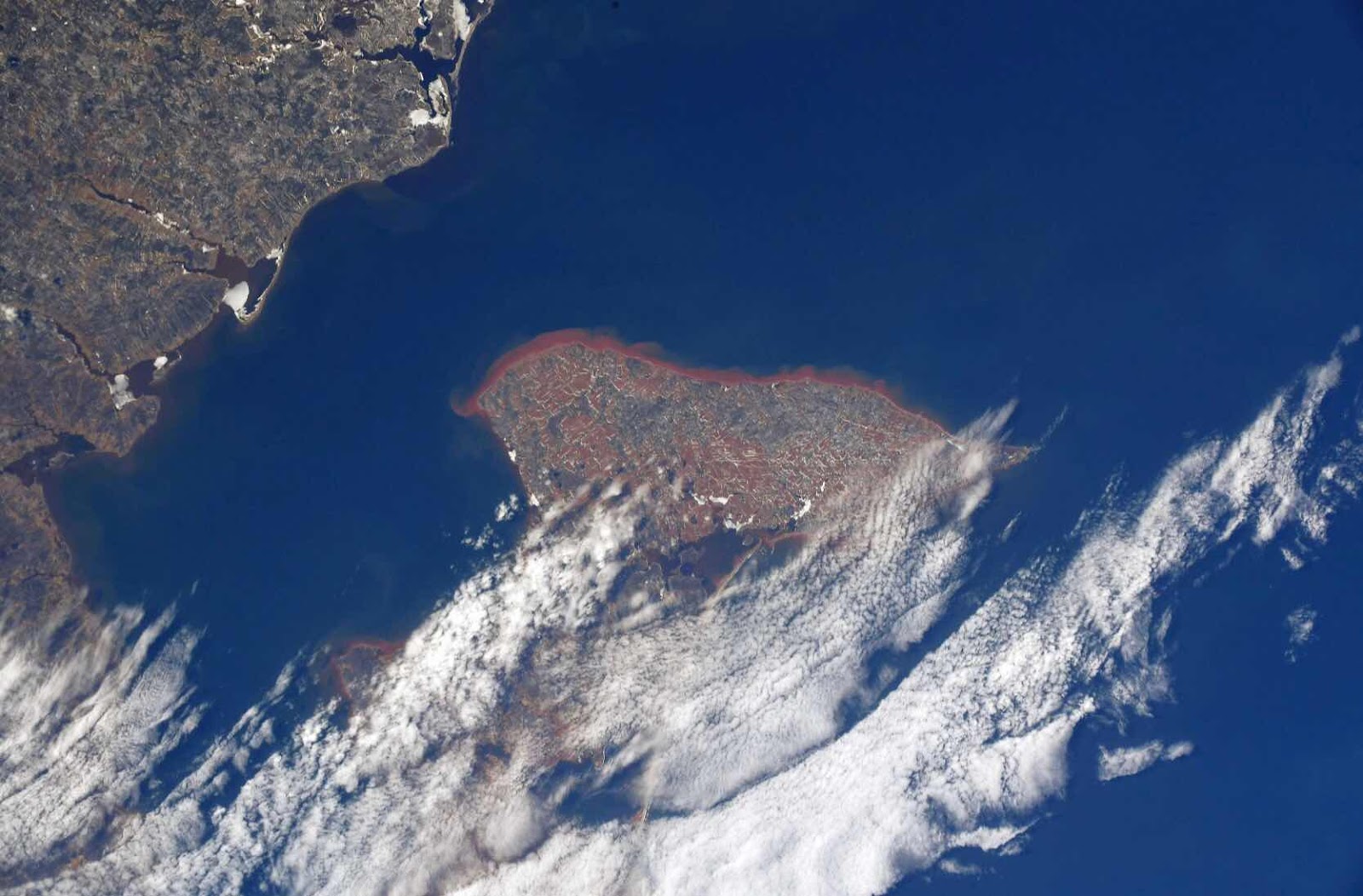 Fishers around the island see the results of this erosion every year as sandbars off-shore make travel in and out of ports hazardous.

Every year, dredgers work along the coast of the island to make it possible for mariners to safely navigate the coastal waters. One area with problems in recent years is at Malpeque. There, a sheltered harbour provides protection from the storms which lash the north shore of the island but the channel to the Gulf of St Lawrence, past Cabot Beach, must be dredged regularly. Last year, one vessel capsized on its return to port. While fishers survived the ordeal, the event highlighted the danger and the problem with erosion of the coastline.

This spring, prior to the start of the lobster season, a dredger started work on that channel. 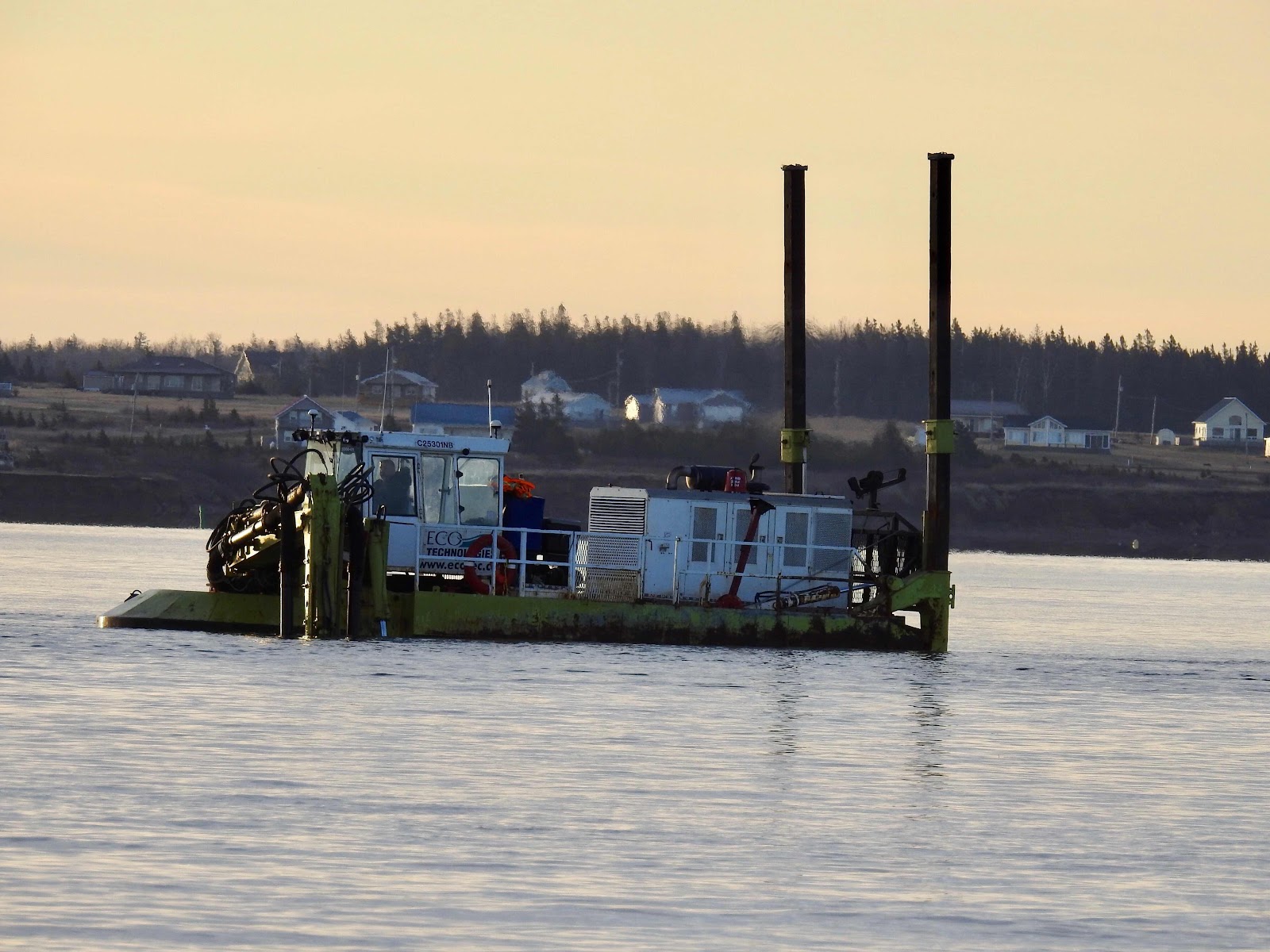 Work continued on Setting Day, the start of the lobster season. We could see the dredger from Cabot Beach and watched with interest as the lobster and mussel boats passed the dredger on their way through the channel. 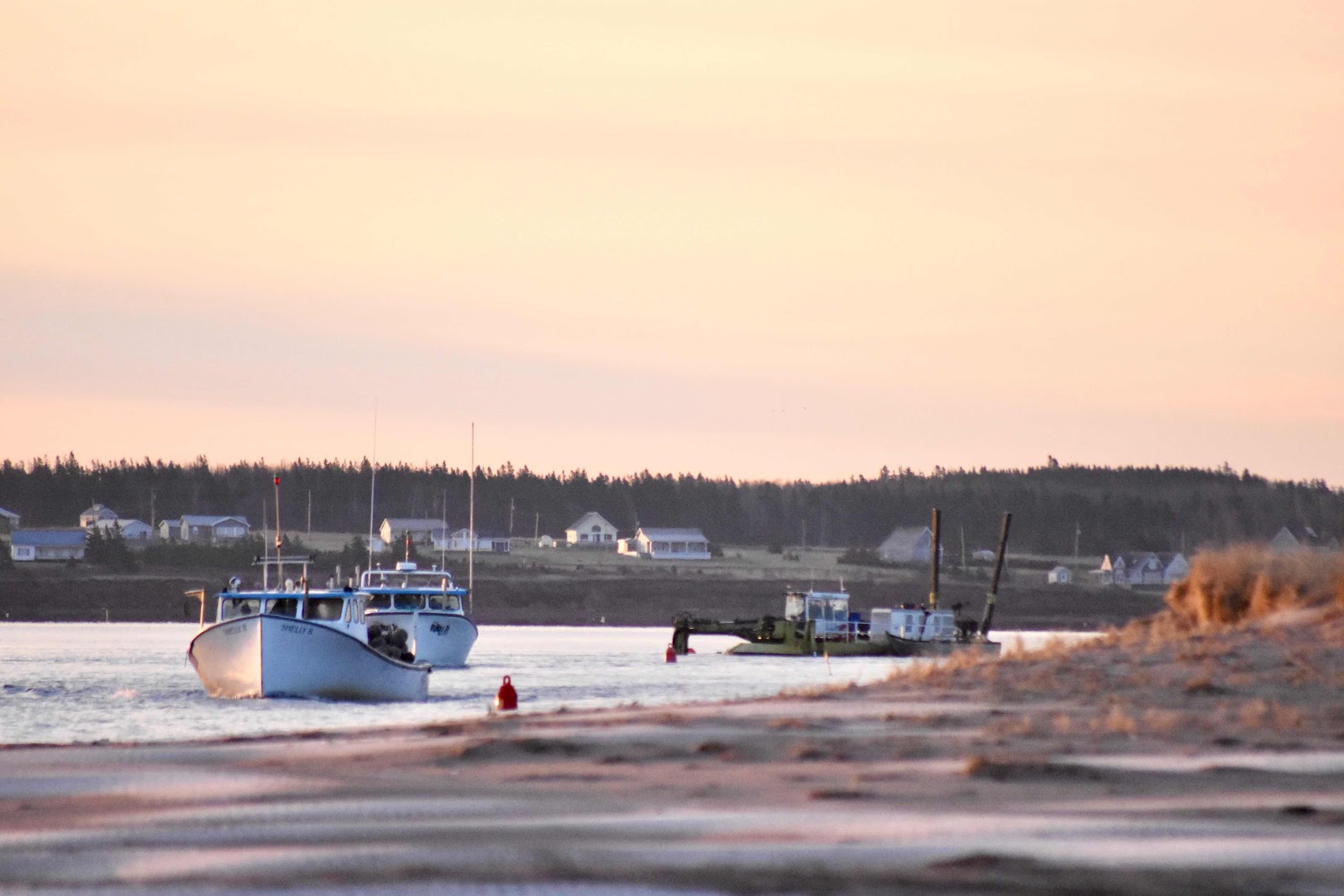 Boats kept between the red and green buoys which marked the channel. The boats were surprisingly close to shore, mere meters from the beach. Past the outside buoys, at high tide, 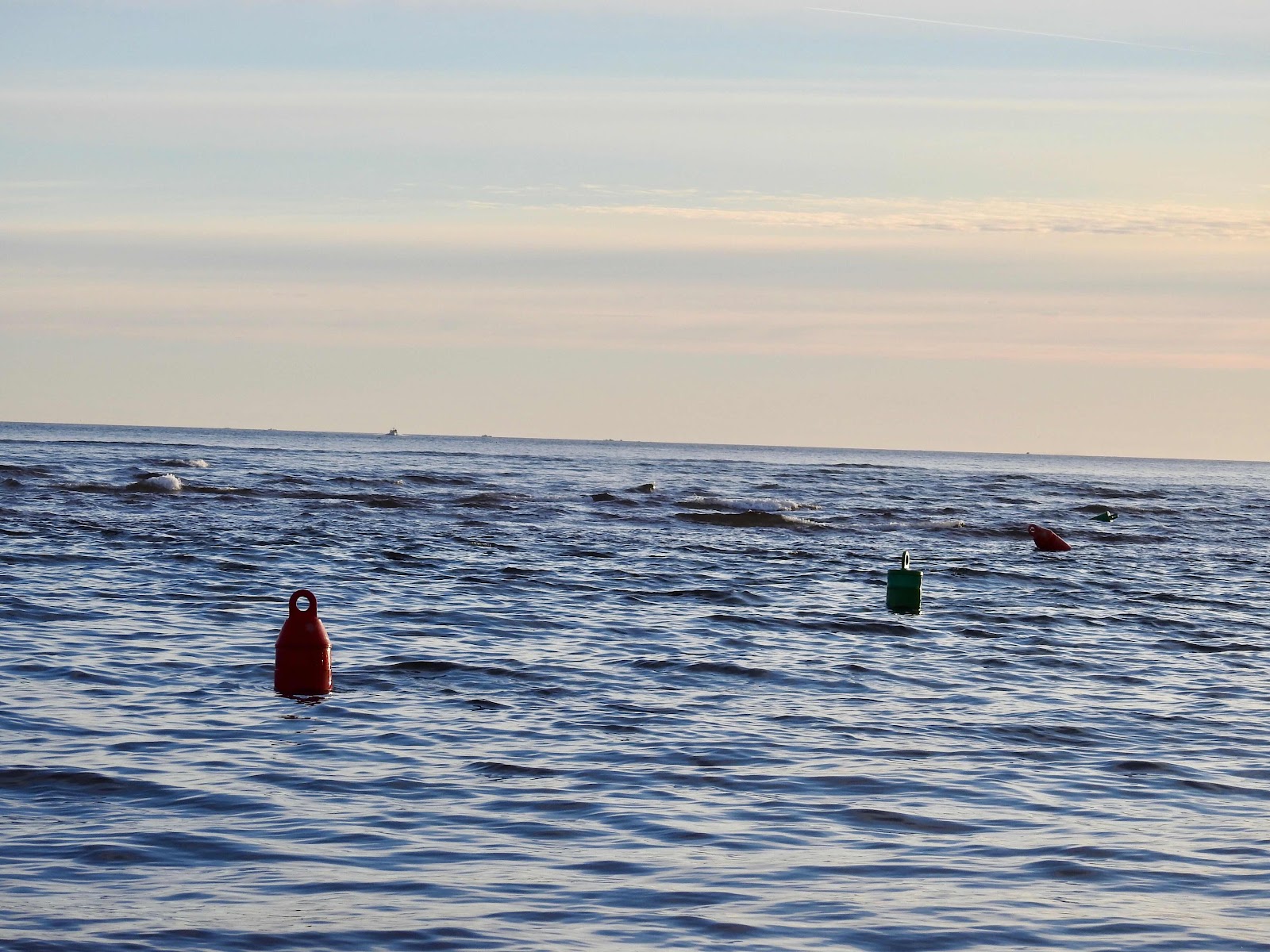 you could see the shallow water, evidence of sand bars, which at low tide would be high and dry.

The dredger worked like a vacuum attached to an exhaust pipe from which water and sand poured. The pipe was long, emitting the sandy water on a nearby sandbar. 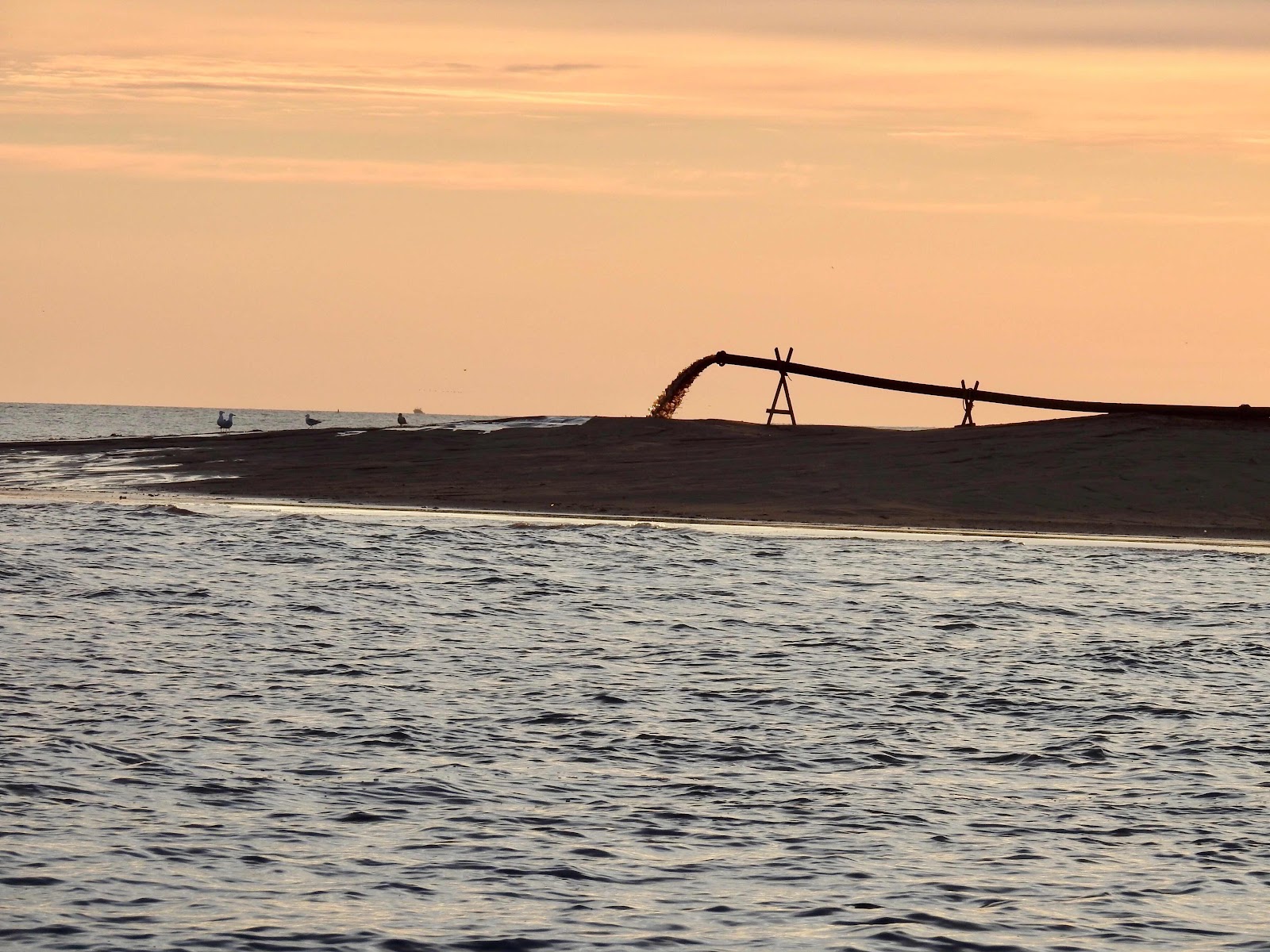 Sometimes the water ran clear but within minutes, 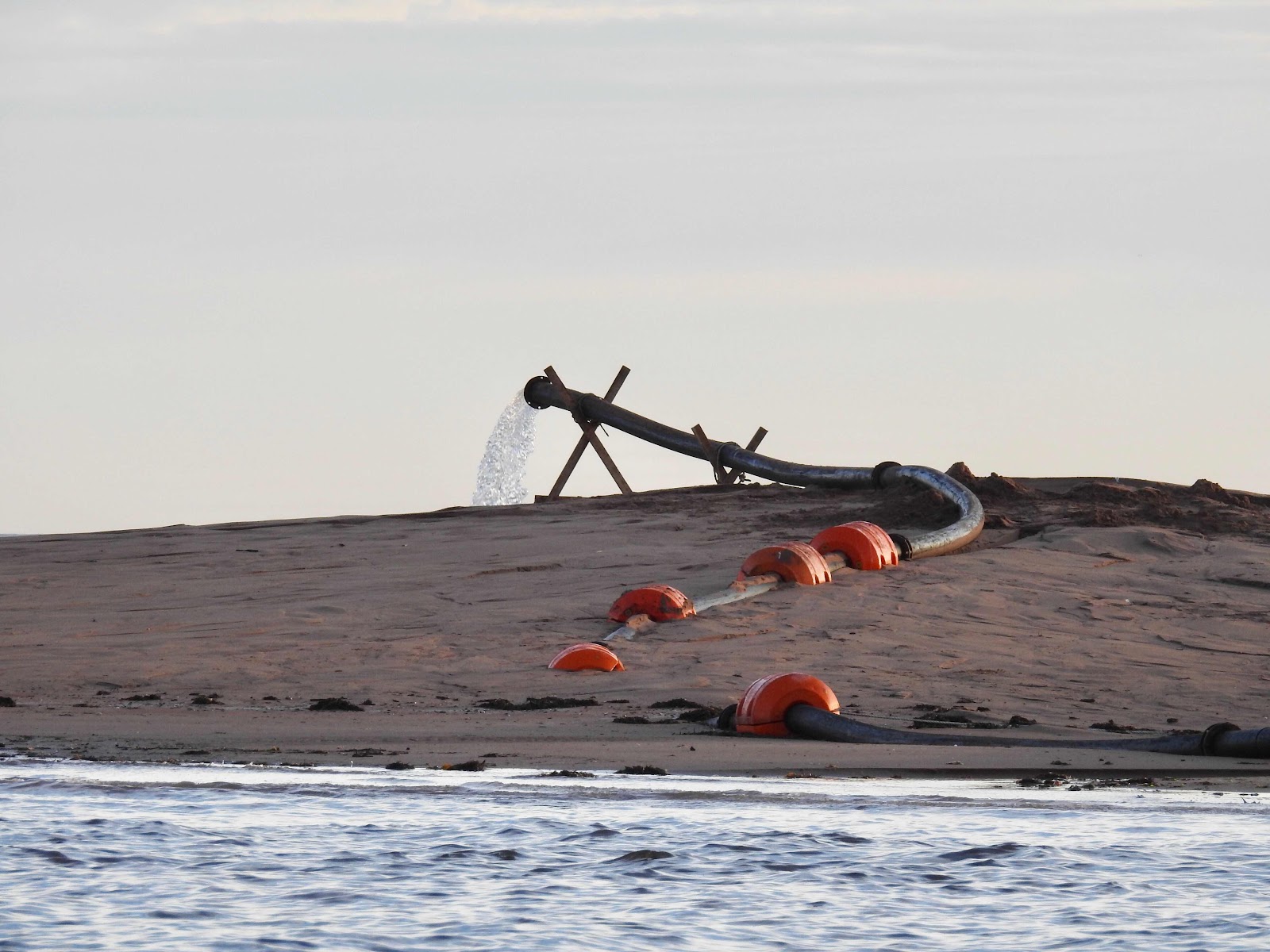 sandy water was emitted again. Always the opportunists, seagulls were camped out nearby to take advantage of any edibles which were dredged up and extruded.

This is important work along the coastline of our province and we were interested to see the process in action.

as i can see some very interesting images that show the effort of dredger here :)

more blessings to you and your wonderful surroundings my friend!

The dredgers do such an important job I agree Marie. I too like to watch them at work in Fremantle harbour✨

It's such a beautiful place, and I am surprised I knew so little about it before discovering your blog, Marie. I hope that technology will keep your island intact for as long as possible. Fascinating! :-)

I have never seen a dredger but have heard of them. Fascinating and clever. Bet the guy who first thought of it was mocked until, of course, it caught on.

Great shot from the astronaut, that is cool. The dredging is important and necessary. Great photos and post. Enjoy your day and week ahead!

A wonderful and important job the dredgers do. Excellent photos documenting them.

The work is never done.

When you start a post with a satellite image, well, it's a very good start.

I love space photos. They really make you appreciate our globe. I wish the dredgers could pile the sand back on the beach. I remember as a kid when I heard about the city of Galveston on the Gulf Coast buying sand to build the beach back up I wondered why they couldn't just get it from the ocean. I suppose there is a good reason, besides logistics, but it still seems like the answer. Then, with the changing clean water rules the US Prez is undoing, it won't be safe to even go in the bacteria-laden water much less eat anything from it before long. I fear for the future of those people who making their living at sea but it sure is interesting to watch through your pictures

This is fascinating - and something my land-locked self hadn't considered.
Yay the dredgers.

That looks very interesting to me. These are things most people never even think about, but it must be an ongoing job.

Thanks for the view of the work involved.

It is fascinating stuff to watch.I saw a flotilla of dredgers in the harbor last year, and G and I watched them with great interest.

This really fascinates me, Marie, because dredging the canals here in the Netherlands is also of utmost importance. At the end of each year the farmers who own the land are required by law to keep the canals dredged/clean so that there will always be free-flowing water throughout the land. Otherwise the country will flood!

how extremely interesting! I hope the efforts work!

We dredge here too and it always amazes me how much soil/sand is deposited each in the waterways each year. Love the NASA photo.

I did not know all this work needed to be done and such important work! Thank you for educating me on that Marie. Beautiful photos!!

What cool picture the astronaut took Island reminds me of little bird.
Coffee is on

Beautiful photos with the different hues of the sunlight. And the fishing boats and equipment...so nice! Andrea

I did not realize I had missed so many posts!!
Great pictures as usual!