Along the West River

The Bonshaw Hills provide some of our favourite hiking trails. On our second visit this year, we took the trail which lies between the West River and an equestrian park. The golden grand-dog, Georgie, was with us and we kept her on lead. Experience has taught us the water is too much of a temptation for her and she dives in any chance she gets.

This is a trail bed with many roots 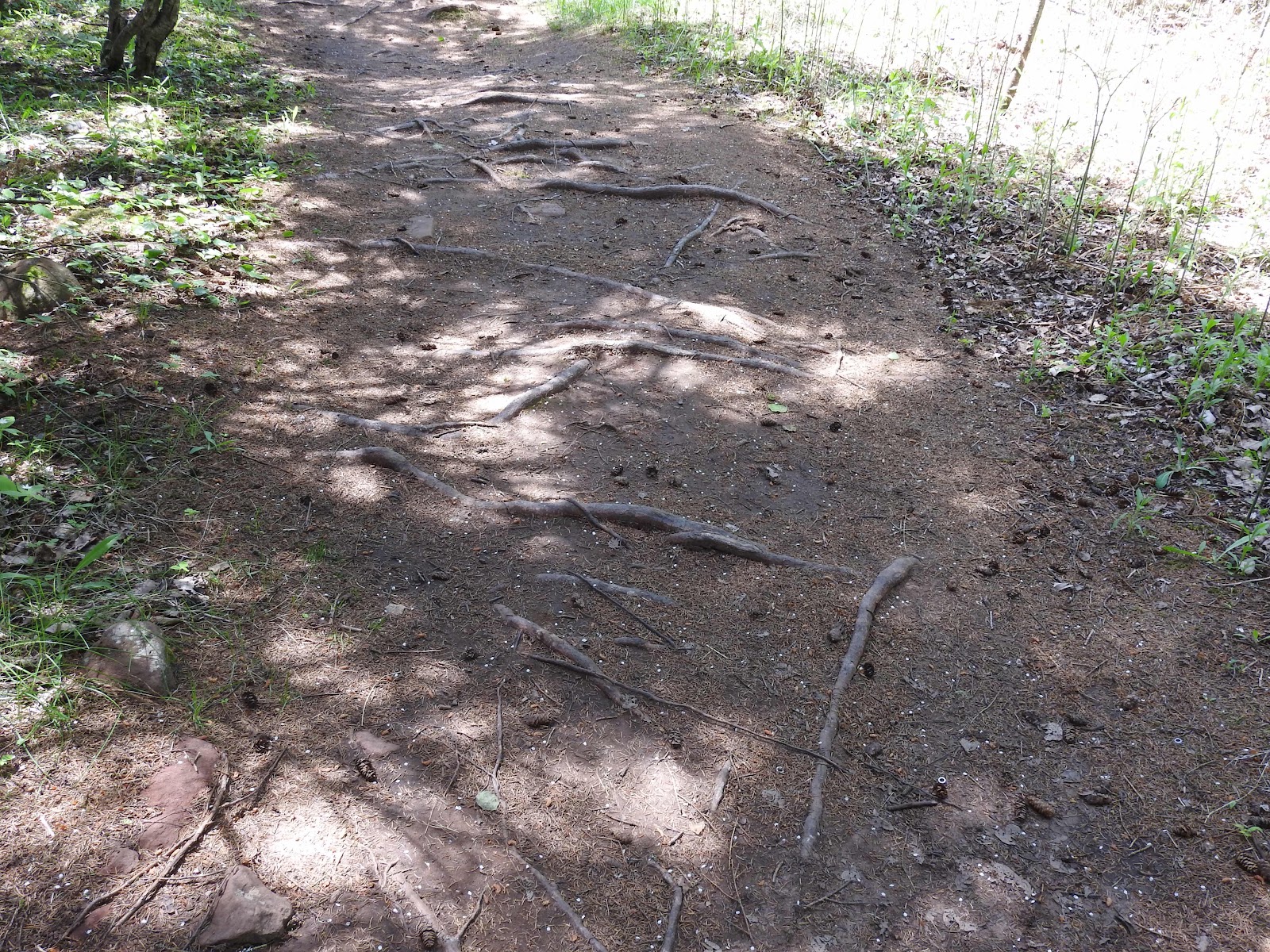 and occasional rocks, so we kept our eyes on the trail and stopped periodically to take in the scene. There are several hills on this trail which were less of a challenge for my husband and I than earlier this season. 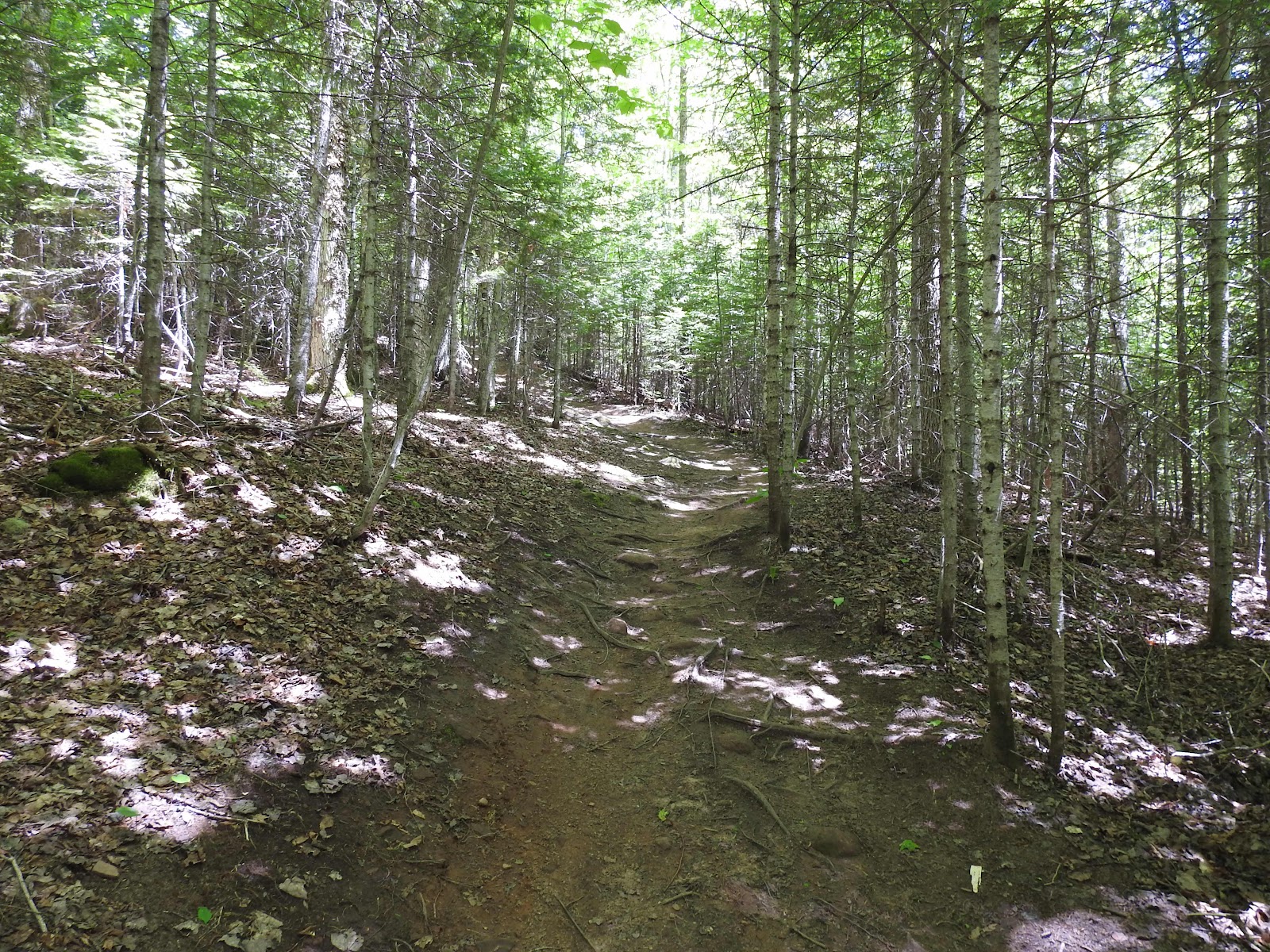 From the trail, we could see equestrian jumps 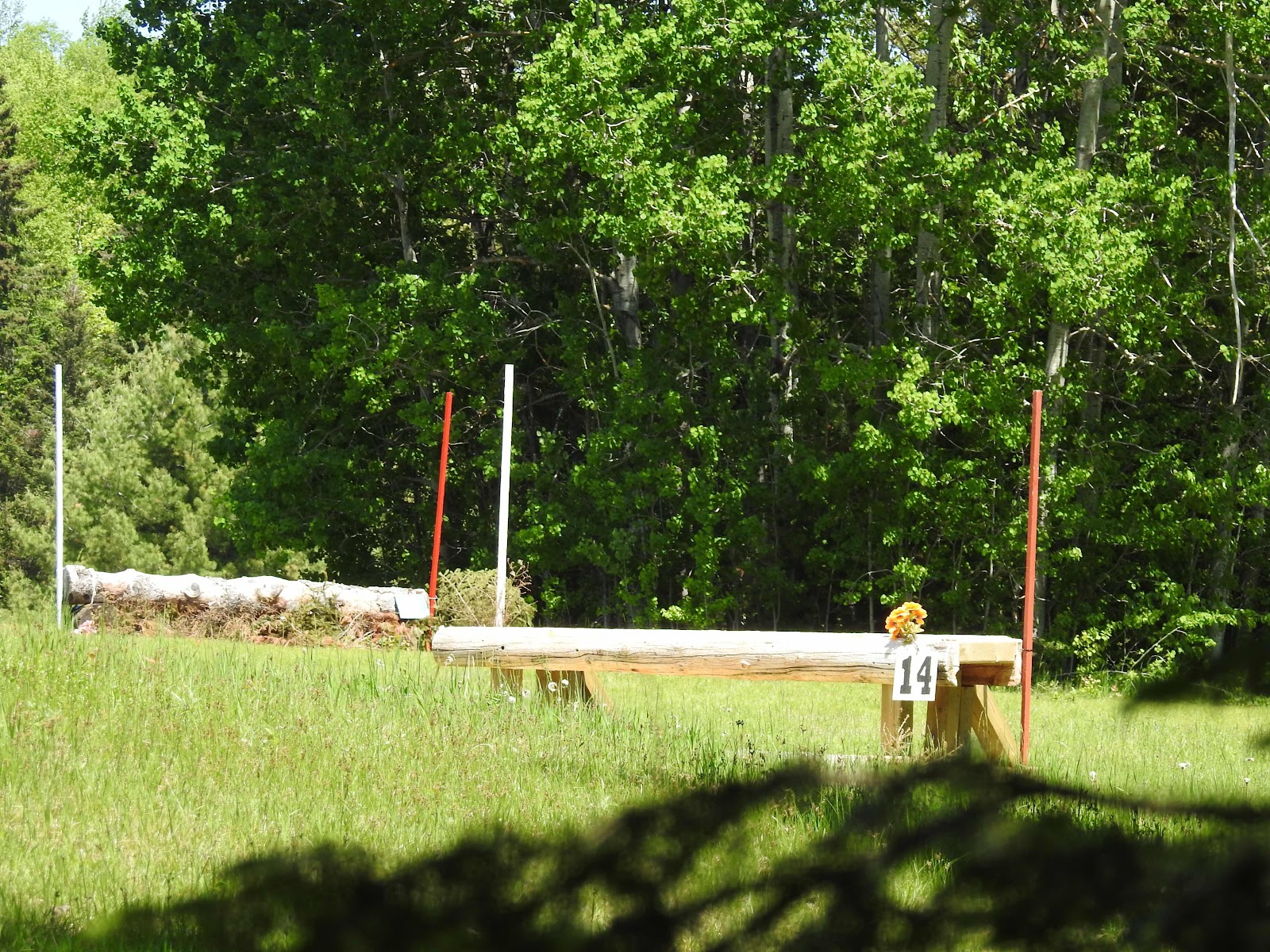 through the trees on the left and the river on the right. 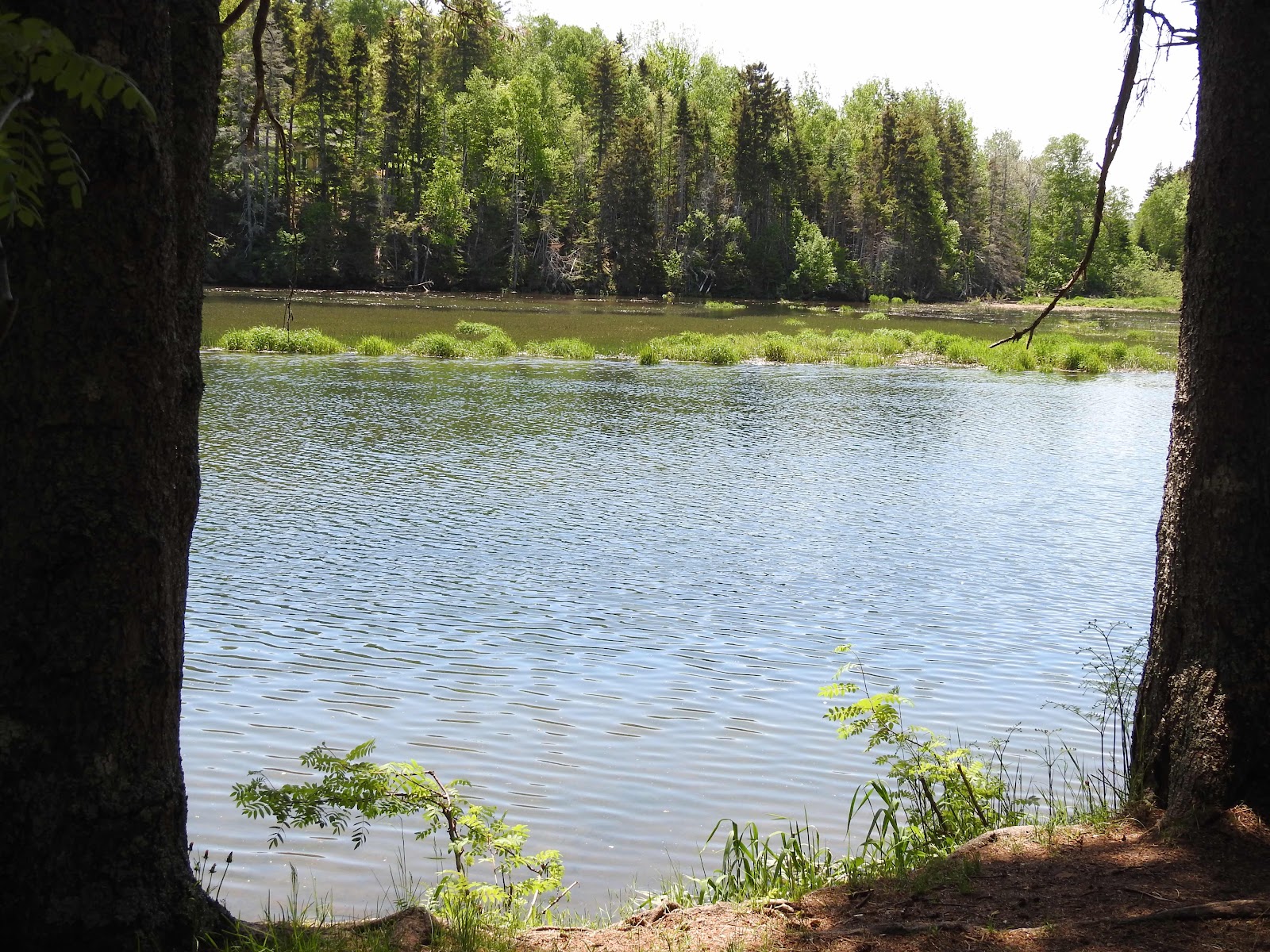 The trail is often in the shade as the canopy is thick. Sometimes sunlight finds an opening and casts dancing shadows on the trail. 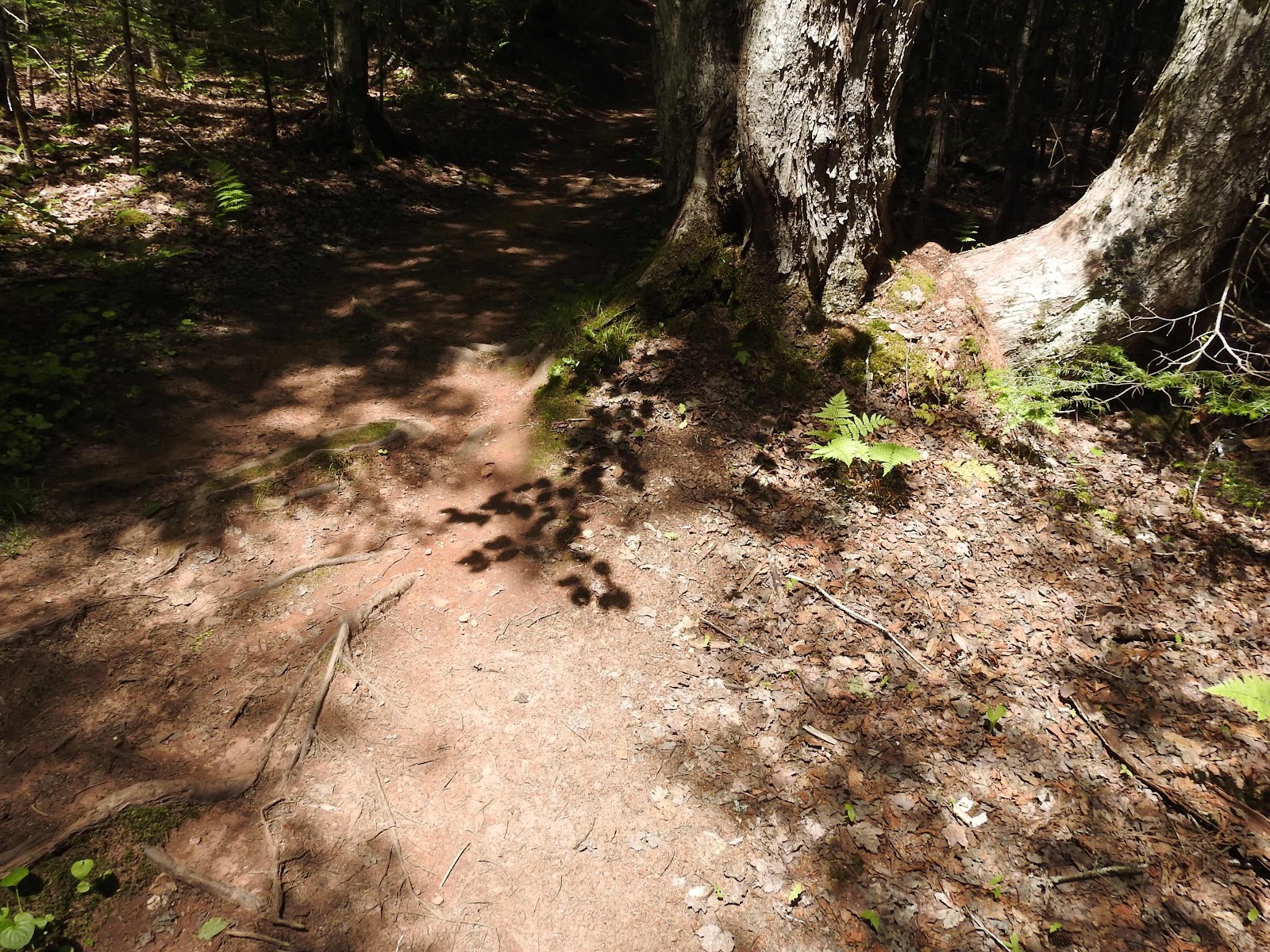 There are many maple and birch trees along the way. One tree trunk caught our attention because it looked to have been damaged by a fungus. 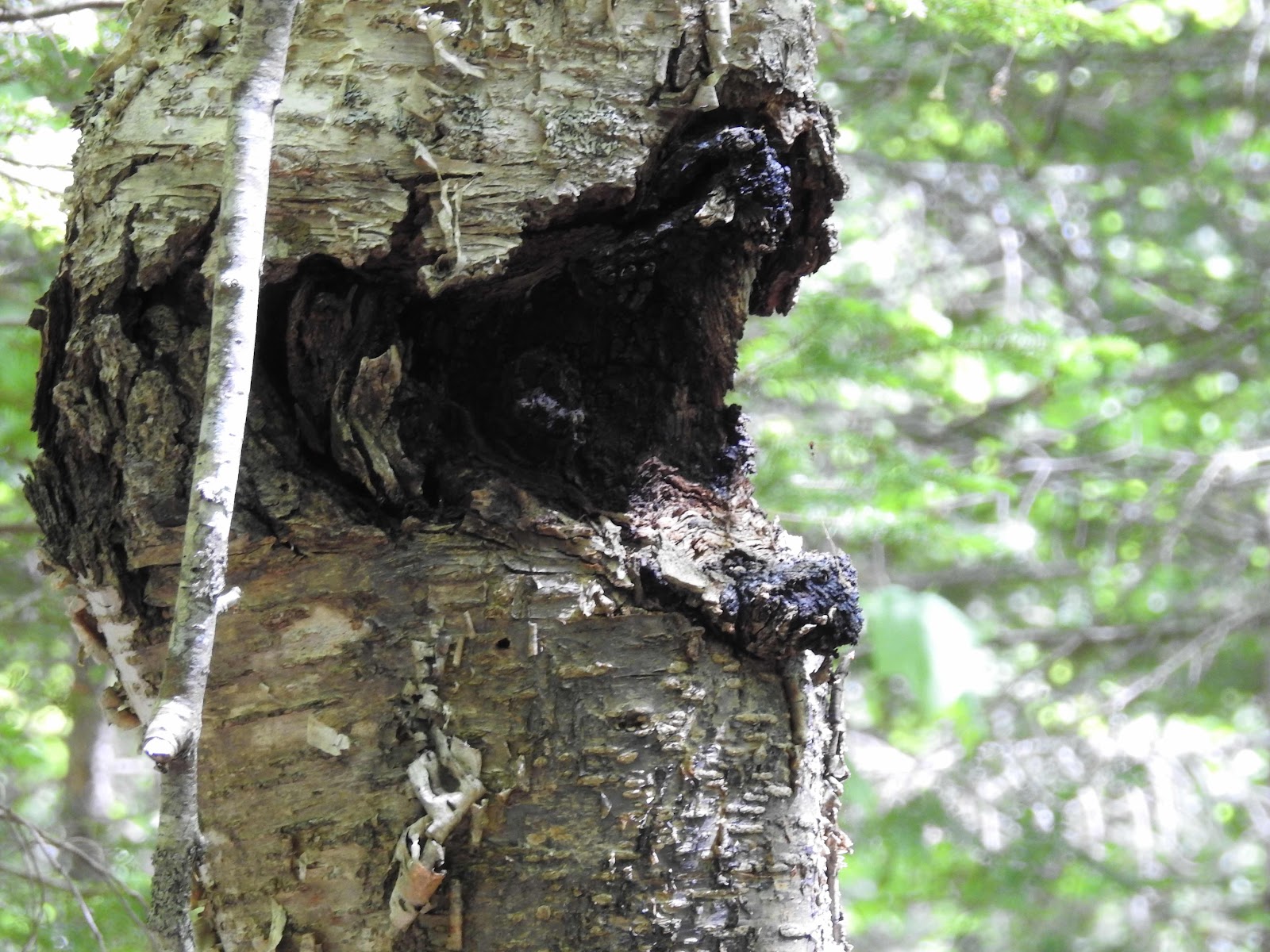 The tree above was unharmed.

Metal pieces from an unknown past were displayed at one location, sparking speculation as to their purpose. 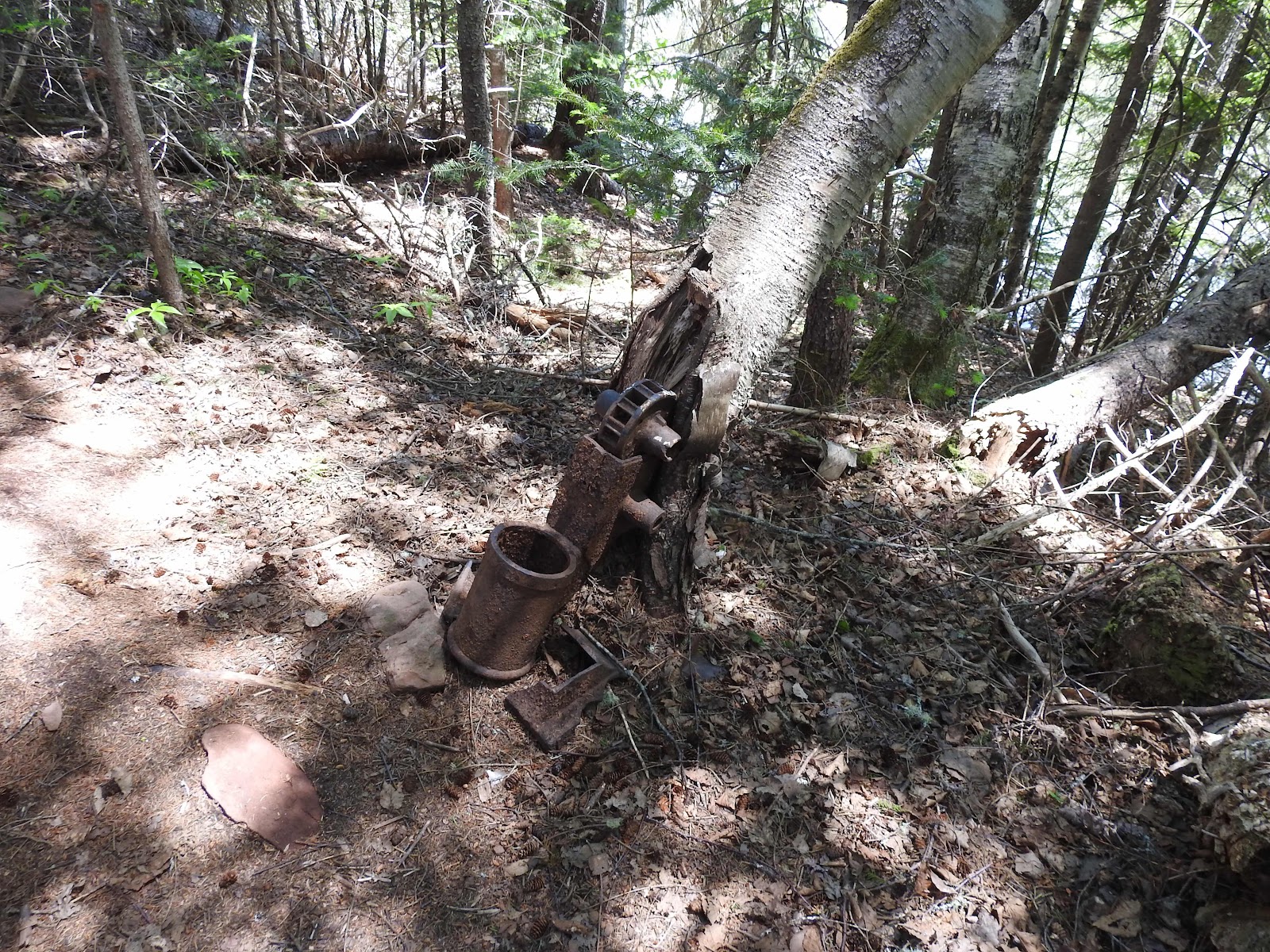 Woodpeckers were busy here as well as squirrels, 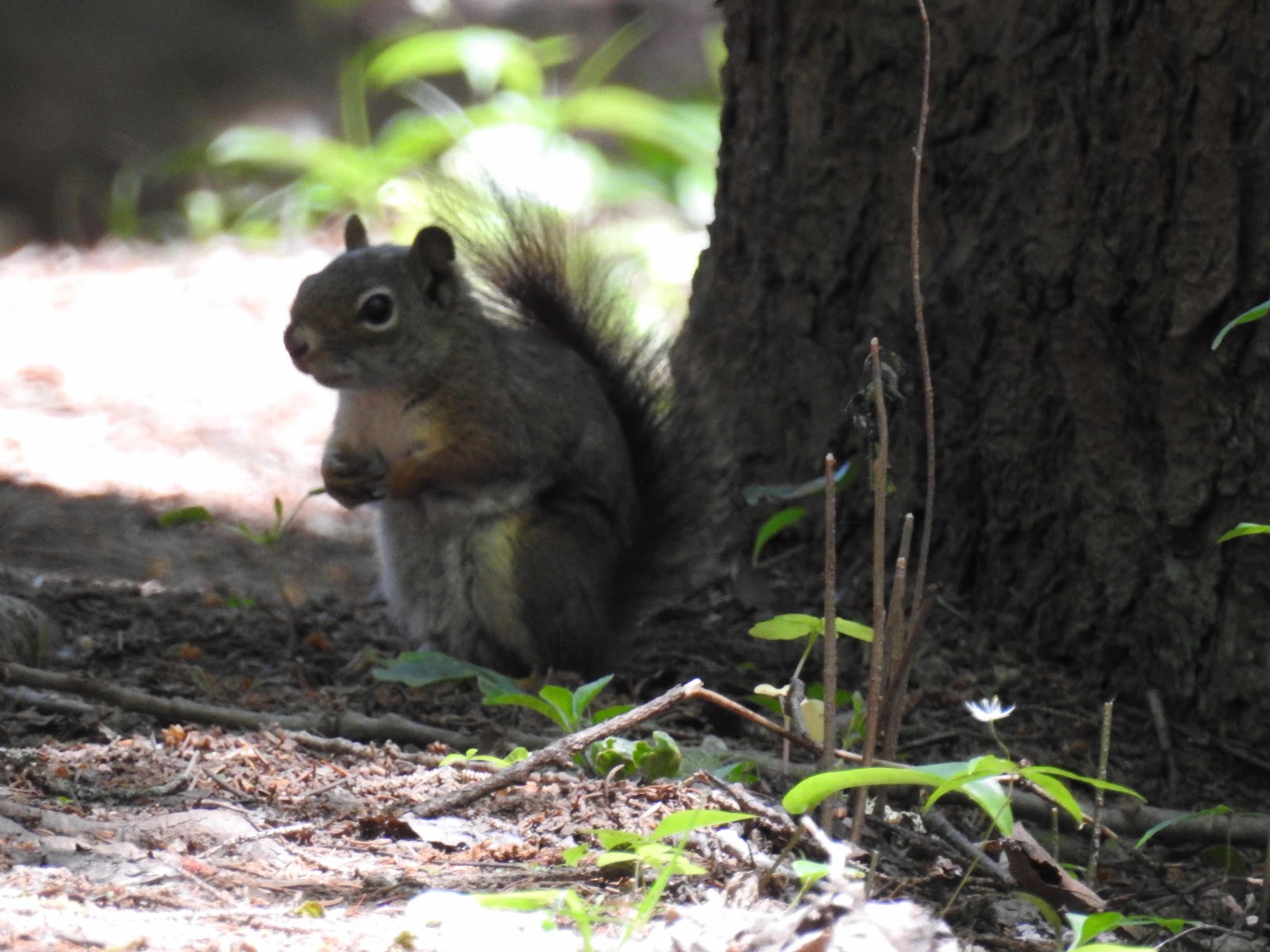 who had little fear of Georgie.

We returned the way we came and met a couple with two Biewer terriers, Pepperjack and Pepperjoy. 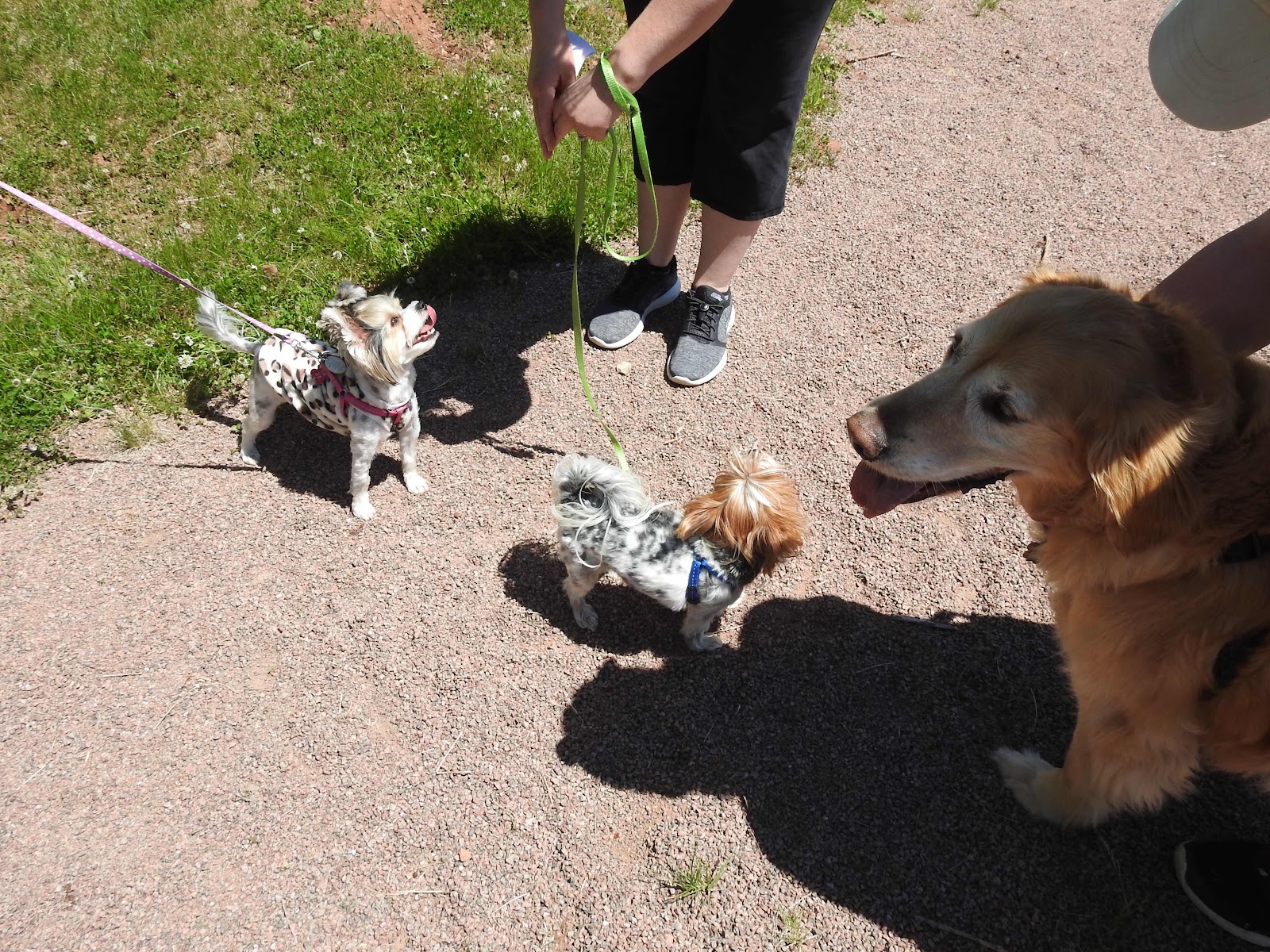 Pepperjoy is deaf since birth and understands sign language for traditional words used with dogs. Both terriers were unafraid of Georgie and not aggressive as some small dogs are around bigger dogs, so the meeting was friendly.

We had our picnic in the park under the gazebo where we cooled off and relaxed before heading home. 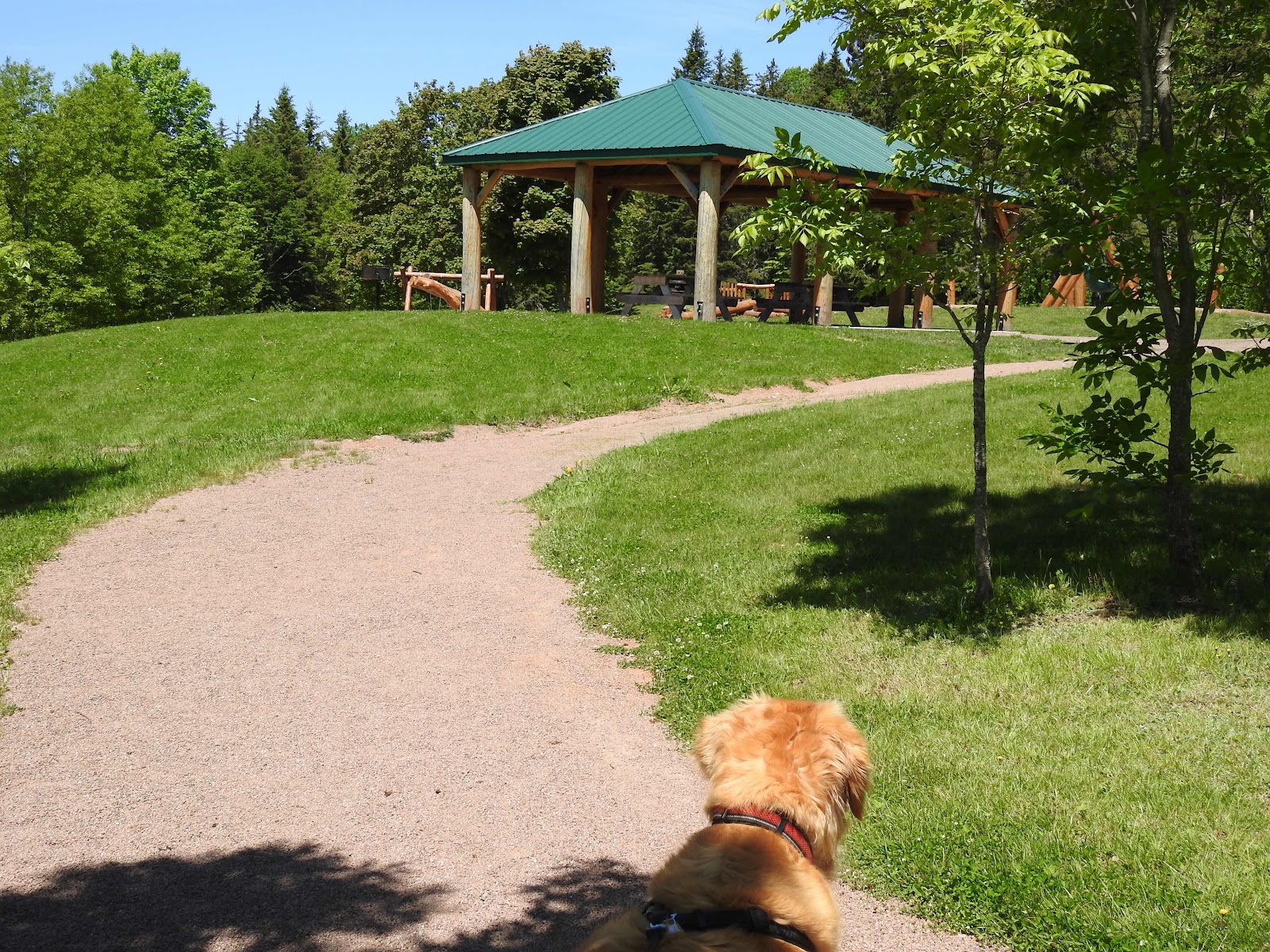 John at https://john-s-island.blogspot.com/ asked if the Millman Road was close enough to home so we could walk there every day. The sad reality is that the road is about a twenty-five minute drive from our home so we don’t walk there regularly. My husband and I will go back there in the fall.

Your pictures take me there, and I enjoyed our walk together. Those terriers are certainly interesting looking dogs. I understand the need to keep one's eye on the trail so you don't fall over those roots. :-)

Another enjoyable walk Marie. I bet Georgie loves those walks so much, nice to meet up with other furry friends along the way 😊

Hello, looks like a nice walk with nature. Georgie reminds me of my old Goldie Girl, I miss her. The two terrier are cute. Enjoy your day, wishing you a happy new week!

Georgie has a happy and relaxed face and not at all worried about the other dogs, very sweet! Beautiful places to walk. Those trails shows the roots at the surface reminds me of the top of my grandmother hands. The veins were popped up like those roots. Her hands were incredibly soft. Love the fact that the dog learned sign language so well!

Great photos and I bet Georgie enjoys them. Have a good week, Diane

Loved walking with you. As always. Many thanks.

Enjoyed your walk, Marie. Pepperjack and Pepperjoy are very cute and they seem to made friends with Georgie. A grand day for everyone.

Thanks for sharing your lovely walk with us here. The scenes look fantastic and the walk very interesting.

Georgie is such a friend looking dog. Those little ones are cute and I love their names. Thanks for sharing your walk. I know you enjoyed the pretty spot to rest for a picnic.

I laughed when I saw those roots in the trail. I have to watch myself on the uprooted sidewalks around here so I would be a real danger to myself on that rode - somebody say skater knee pads. However, the roots are beautiful as they represent the growth and energy the tree spent to survive.

I know all about keeping a dog on the leash where there is water involved. Our TessaDog loves water and splashes in at every opportunity. But the worst things is black slimy mud.... she LOVES to roll in it. And don't get me started about the delights of horseypoo.
Lovely to have some pretty places to walk. I'll be puppysitting TessaDog this weekend so perhaps a trip to the forest.

another beautiful trail, it must be hard for georgie to stay on leash!!

i love when trees form a canopy over a road or trail, it is just so pretty!!

the biewer terriers are adorable, i am not familiar with that breed!!!

Oh, that looks like a wonderful place to walk. Such views and resting spots.
The roots could be a bit troublesome...I would sure have to pay attention or I would be looking at the view from the ground up!!
Hubby and I need to get out and walk more.

Looks like a perfect place for a walk, especially with a grand-dog!

I love the picture of the dog meeting. Glad everyone was polite and well behaved.