It was such a welcome surprise. We’d had a walk on the Millman Road and headed to Cavendish Grove for a picnic lunch. Our intention was to walk to the Lake of Shining Waters after lunch to look for goslings among the geese who frequent the lake. The geese and goslings who had been in the grove this spring, hadn’t been there the last time we’d visited.

They were this time. In fact, ten adults and numerous goslings were in and around the basin, 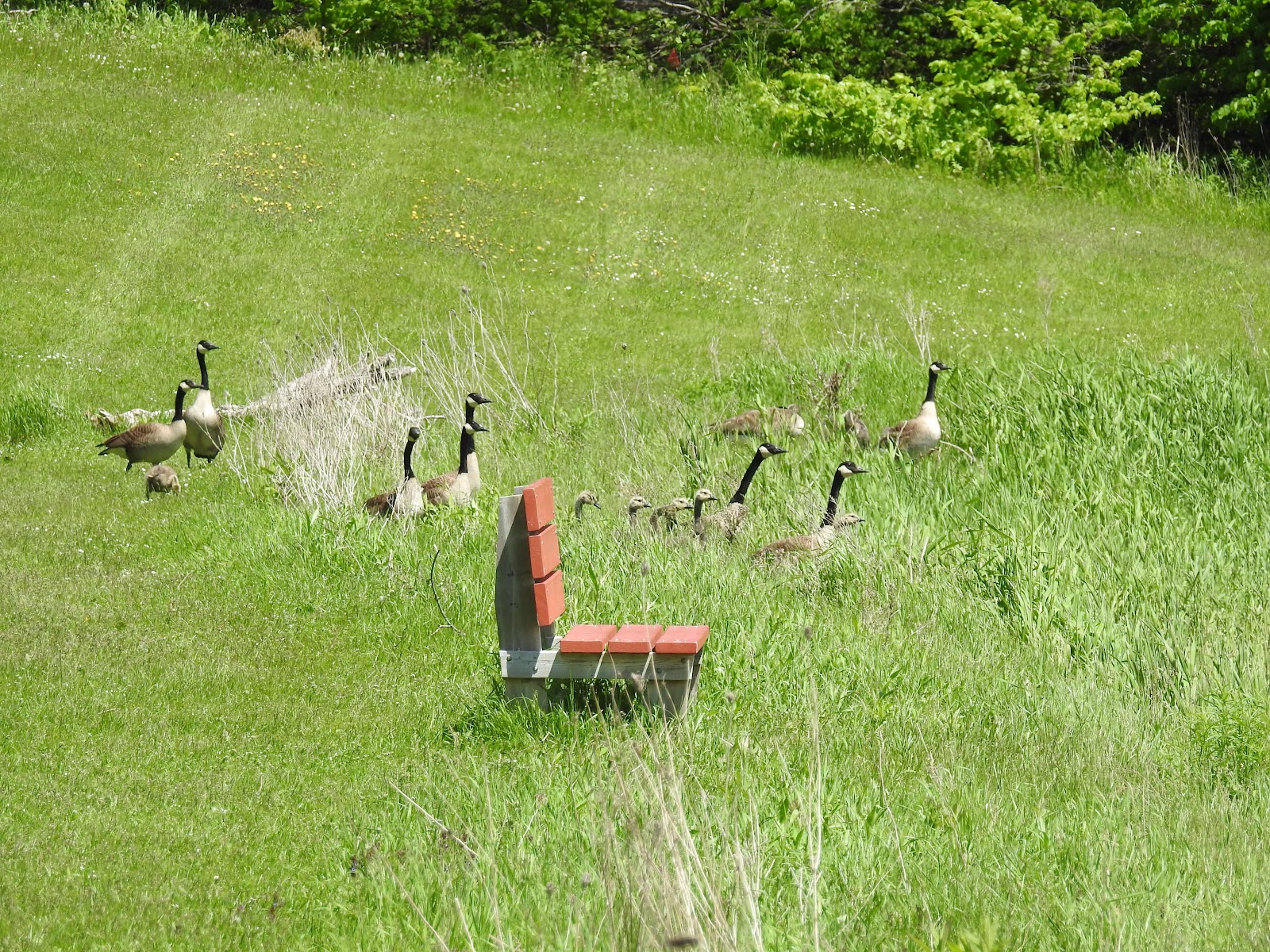 more adults than we had seen this spring. While we ate in the sunny cool breeze, we watched the gaggle move from bank to water and disperse among the grasses. 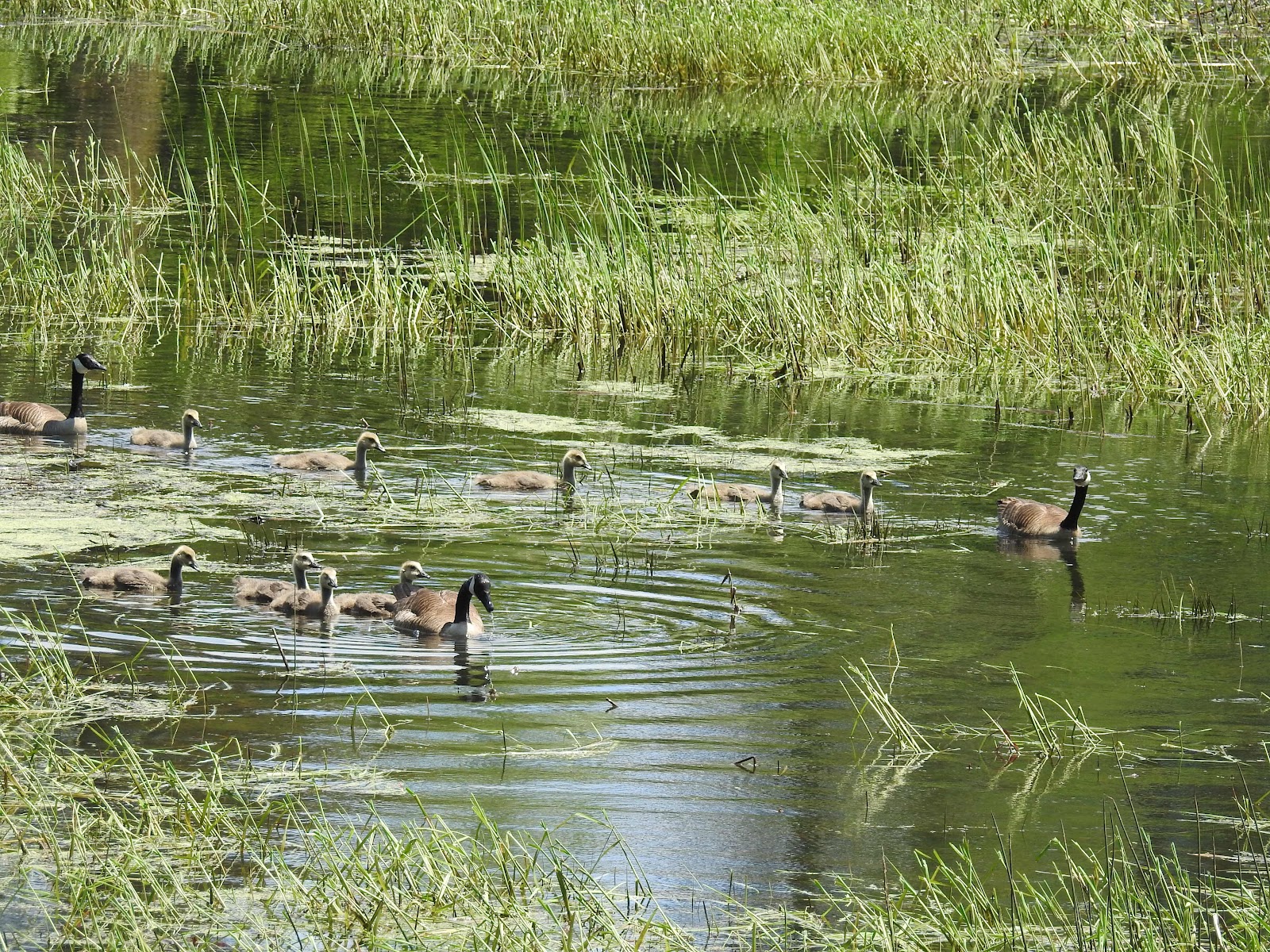 The goslings stayed close to the adults who were wary of any movement we made.

The adults are molting and there are feathers over the grass around the basin. 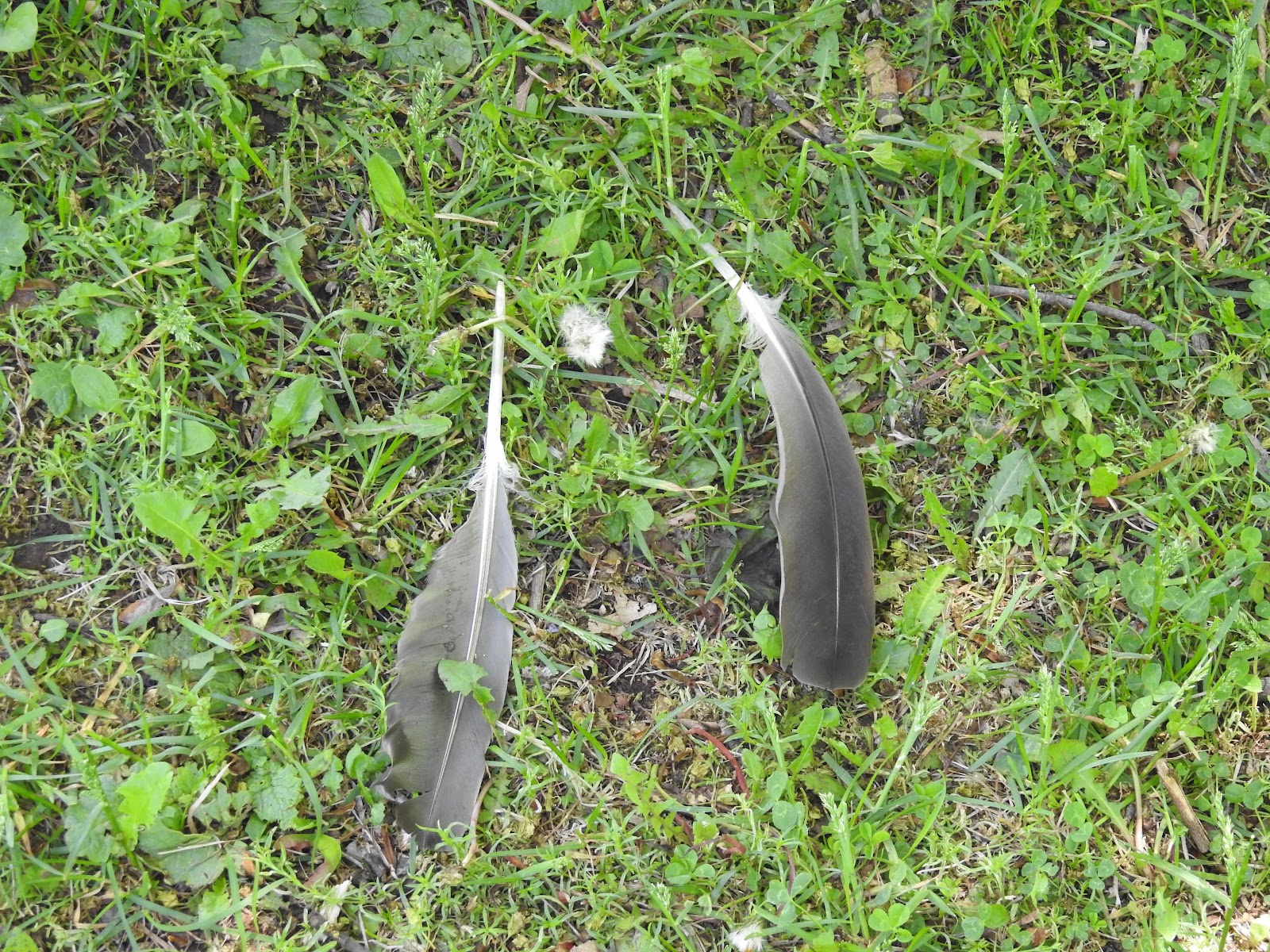 For the next month or more, the adults and goslings will be vulnerable and security in numbers is a coping strategy.

It was good to see our old friends in the grove again.

Nine days later we visited the Grove. There was a huge change this time as the basin had almost dried out. 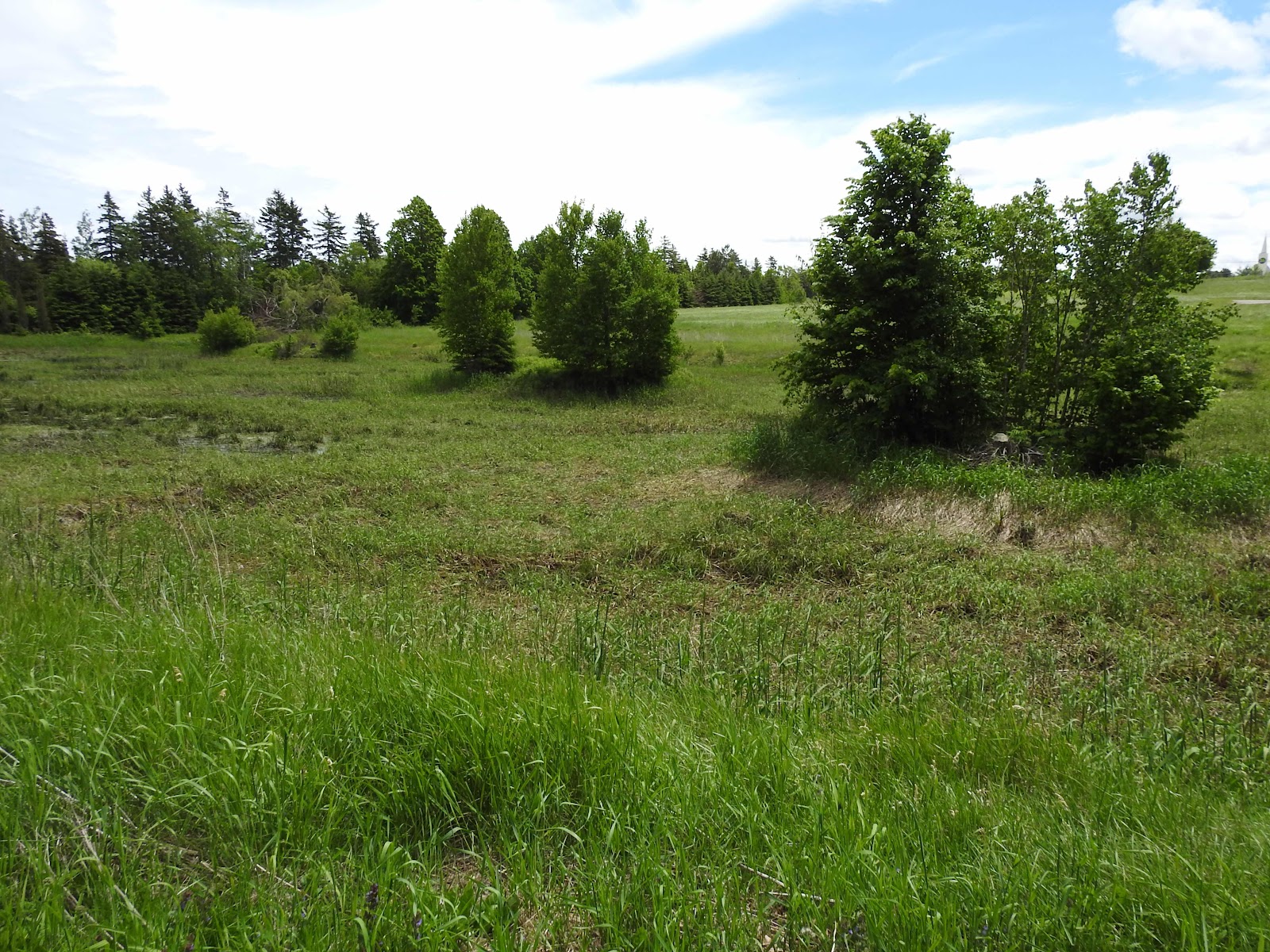 There was a small amount of water in one side without any geese. I walked to the upper pond and saw geese immediately, two groups among the plants at riverside. 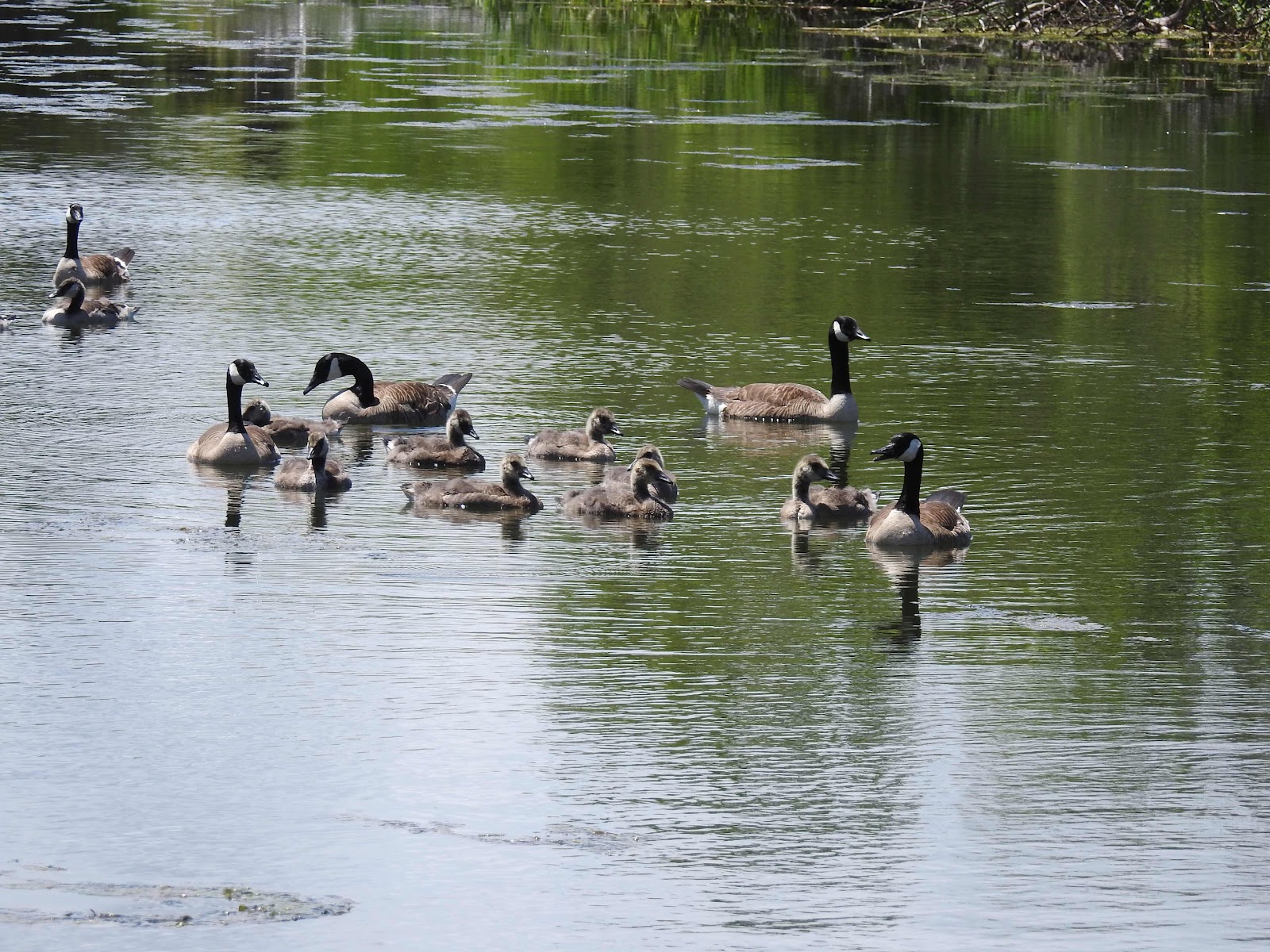 One group had four adults and eight goslings. The other group had two adults and two goslings. I suspect the other geese we had seen previously were among the grasses further up the pond.

The goslings are growing feathers now to replace the down. 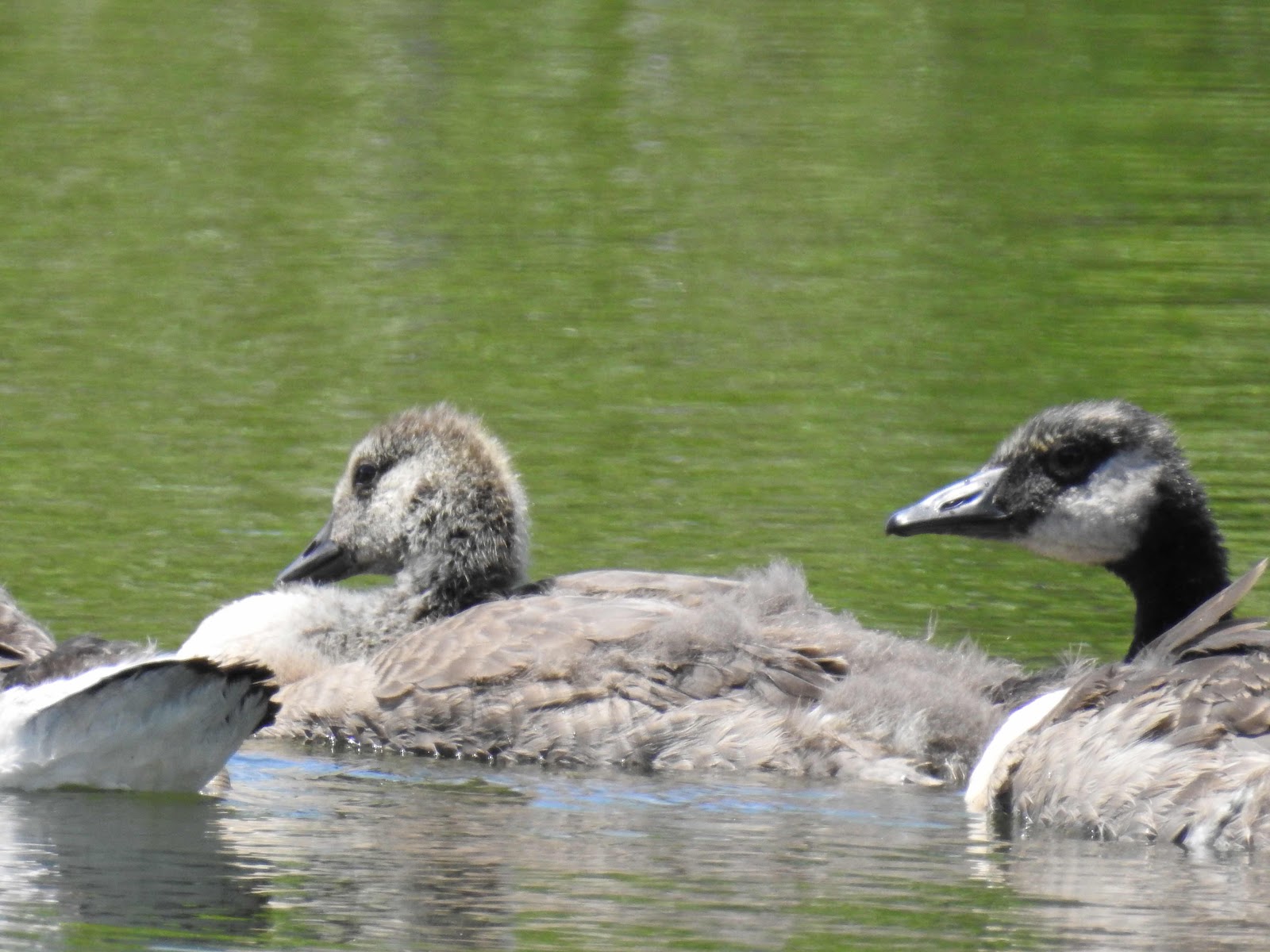 Their heads are turning black with the white Canada goose chinstrap and their necks are dark to black. Another few weeks and they’ll be flying.

Posted by Marie Smith at 19:13
Email ThisBlogThis!Share to TwitterShare to FacebookShare to Pinterest

It's good to take a gander at the gaggle.

They look so happy, enjoying their new season.
Such a beautiful place!

I love seeing the gaggle of geese. The goslings are so cute. Great series.
Wishing you a happy day!

They are adorable. I'm glad they are still hanging in there and providing you with such great shots, Marie. :-)

I thought I left a comment. They are adorable, Marie. Thanks for sharing these shots. :-)

Nice to see the babies growing up.

Love their fuzzy little heads. What a fun day.

I hope they all stay safe for another few weeks so they can all fly well. Enjoy the rest of the week. Diane

Wonderful shots of these precious ones!

Yes, those goslings are getting very big now, aren't they!

Great shots of the goslings, they're growing up fast.

A gobsmackingly glorious gaggle.
That area dried up really fast. Is that normal?

Seems that even the young of the birds grow up so quickly, not just our children and grandchildren.

How exciting to see the growth of the goslings.
I'm glad you found them and the photos are terrific.

How interesting. I had no idea until I just looked it up how long these youngsters are dependent on parents.

They are so fuzzy and cute … it's amazing when you see them full grown to see them as babies. Great photos.

Just imagine how these goslings, once grown, will wander far away from where they were raised! We often saw Canadian geese in Atlanta while I lived there. It blows my mind!

Neat seeing them grow. There are several areas here where they like to cross busy roads...I had to stop for some the other day. I always hope they all make it!!

awww, they sure are getting big aren't they!! you shared some great information on how they progress in growing, i enjoyed that!!

The goose family are coming along nicely Marie, I can't get over how quickly the grove dried up, it's the same here. A period of hot dry weather can have horrible results ✨

That was a really large group. So sad to think the goslings will be up and flying soon and in danger but such is the circle of life. I'm enjoying the pictures.

So very cute are those goslings. And I'm so pleased that I came across your blog. Greetings from Australia.