On a rare sunny weekend, we took advantage of the weather and accompanied our daughter, the grandkids and my husband’s mother for a day outdoors, to include a picnic. Georgie, the golden grand-dog accompanied us too.

We visited Cavendish Grove because we have been following a geese family since the goslings hatched there. The area is perfect for a picnic as tables are readily available. The kids enjoy a picnic lunch as much as the adults do. While we ate, we watched the geese floating in the basin. 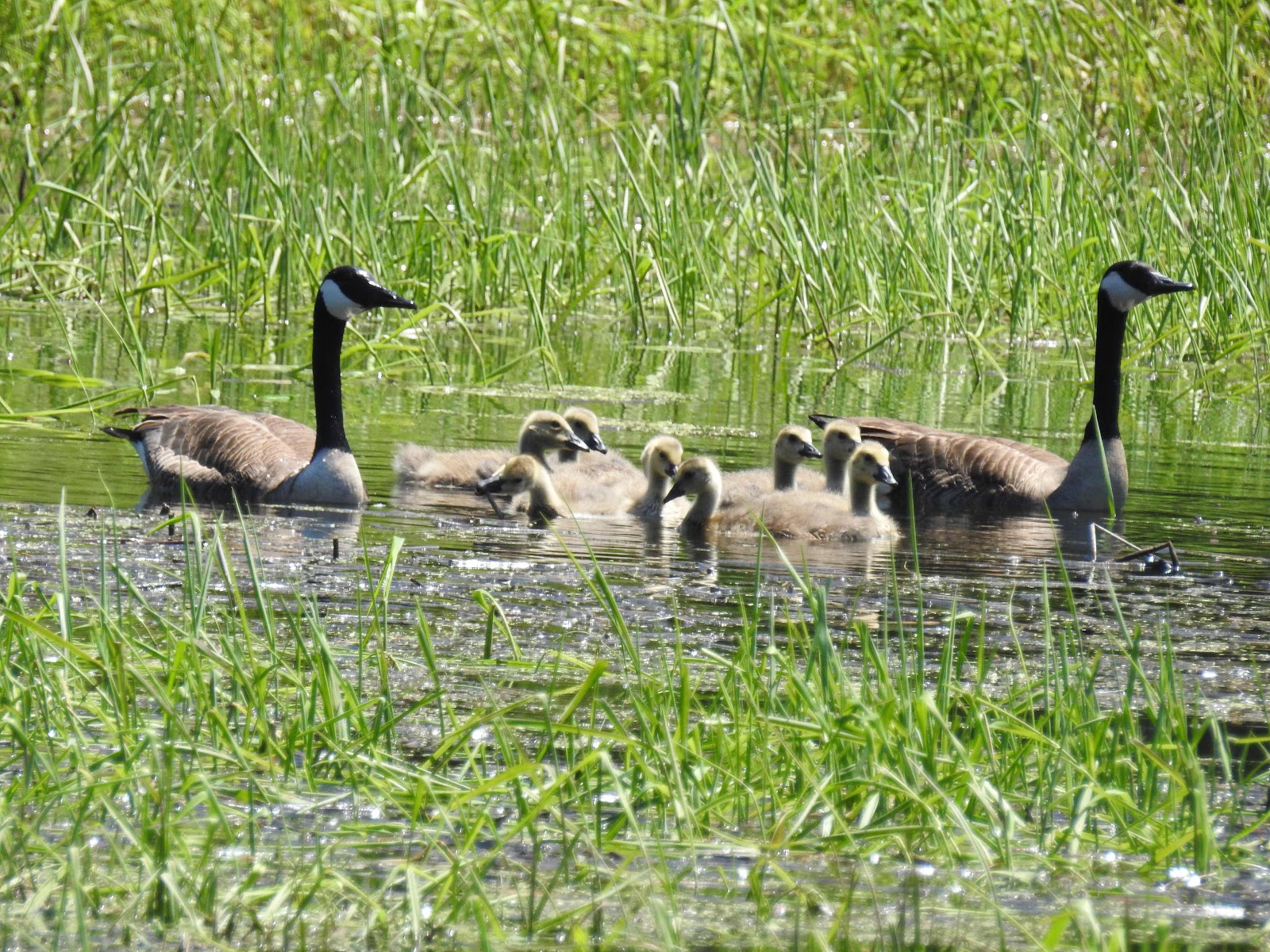 After lunch the adults and the two year old, walked around the Grove while the girls rode their bikes. 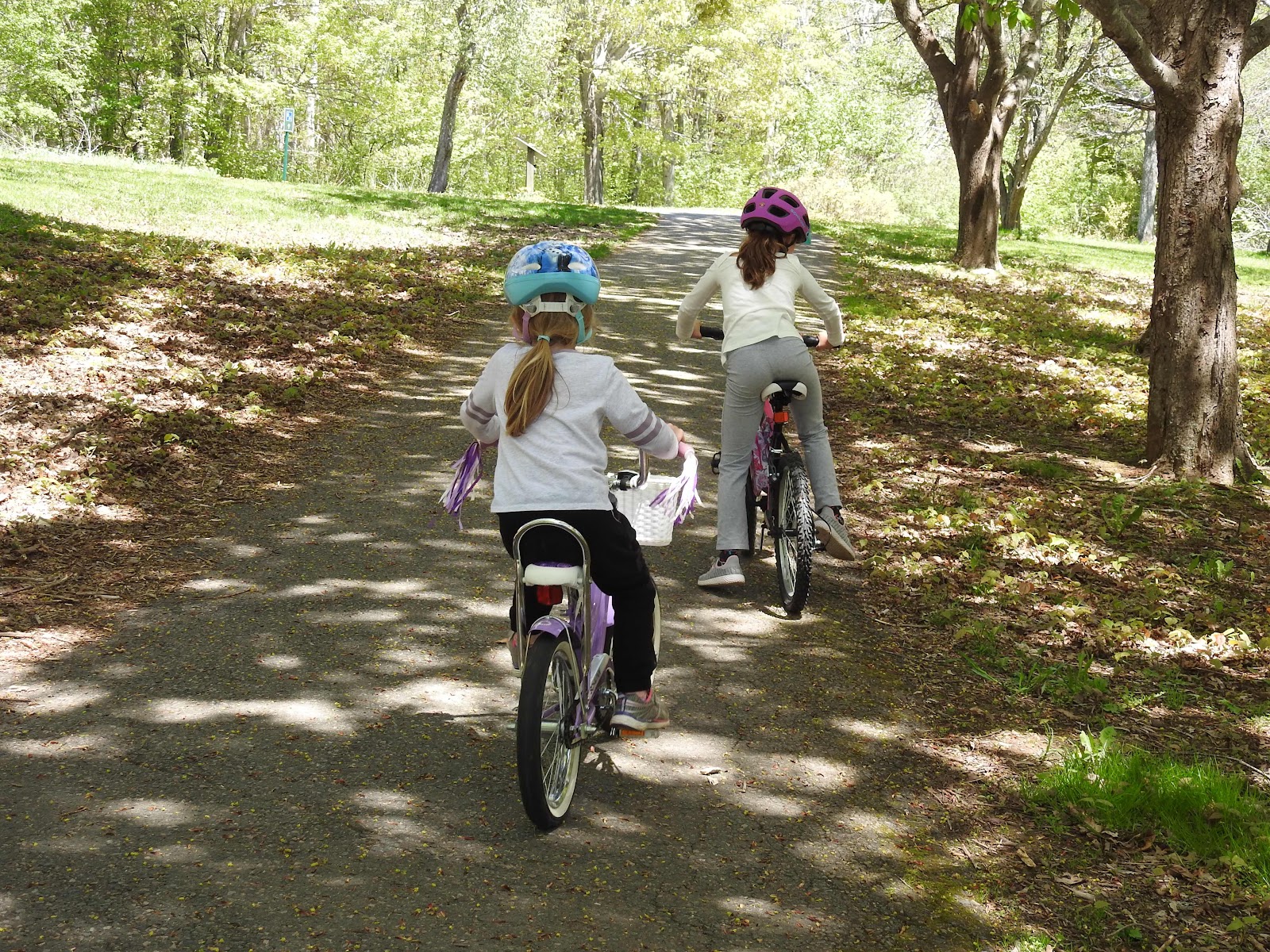 Later we went fishing. That is to say, our daughter and the girls went fishing, the rest of us tagged along.

Owen is not a fisherman yet, if ever. We wonder if he will enjoy the sport as much as his mother who is quickly becoming a fly fishing enthusiast. On this day, she baits the hooks with worms as Sylvie and Caitlin look on and Owen plays with the rest of us. 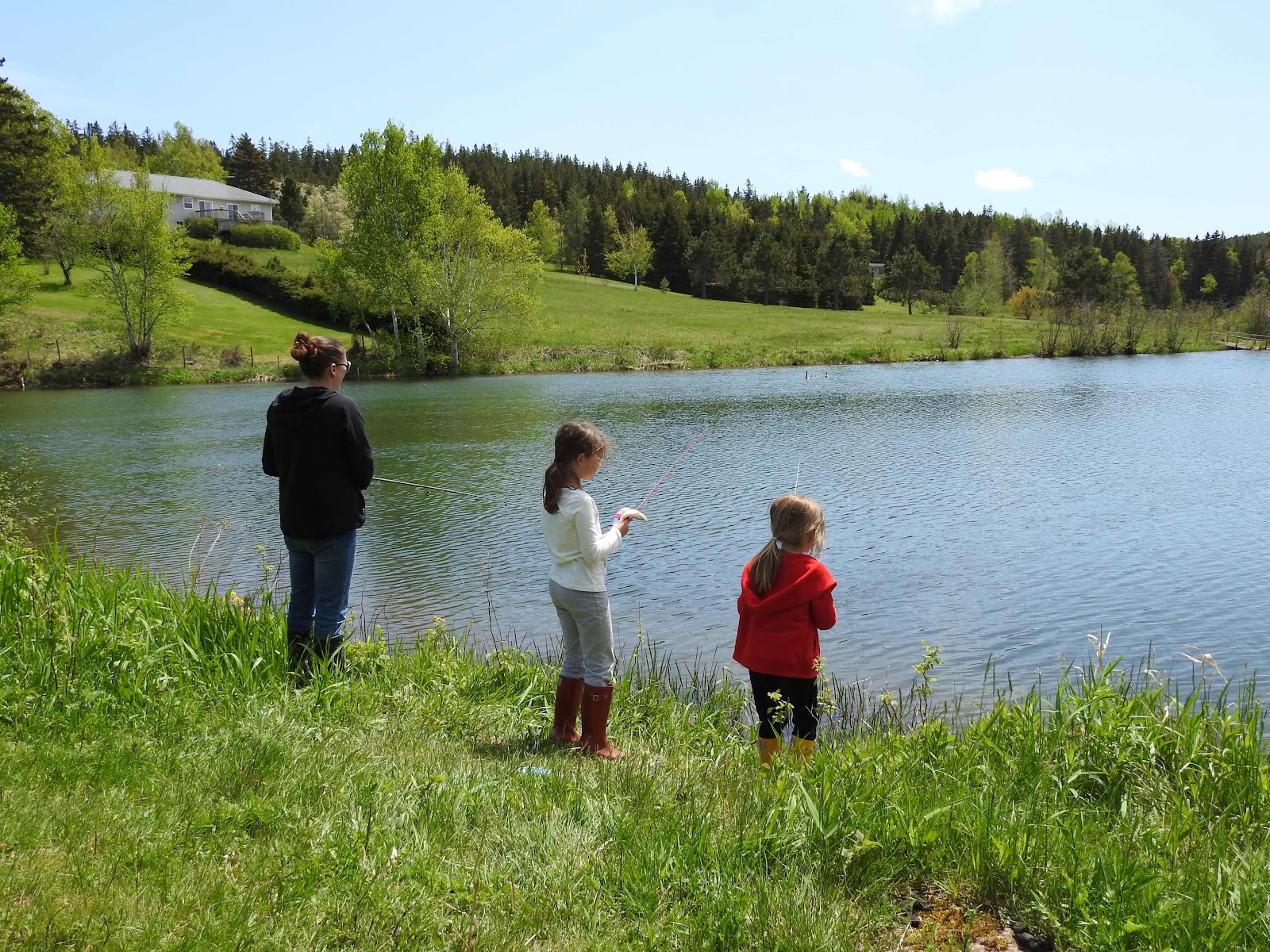 I took Owen for a walk and since he was wearing his rubber boots, he could walk through the red mud puddles. He had such fun, up and down the road several times while his siblings had a few flicks of the fishing rods.

Kevin’s Pond, as it is known, has two fish ladders on the river which empties the pond. 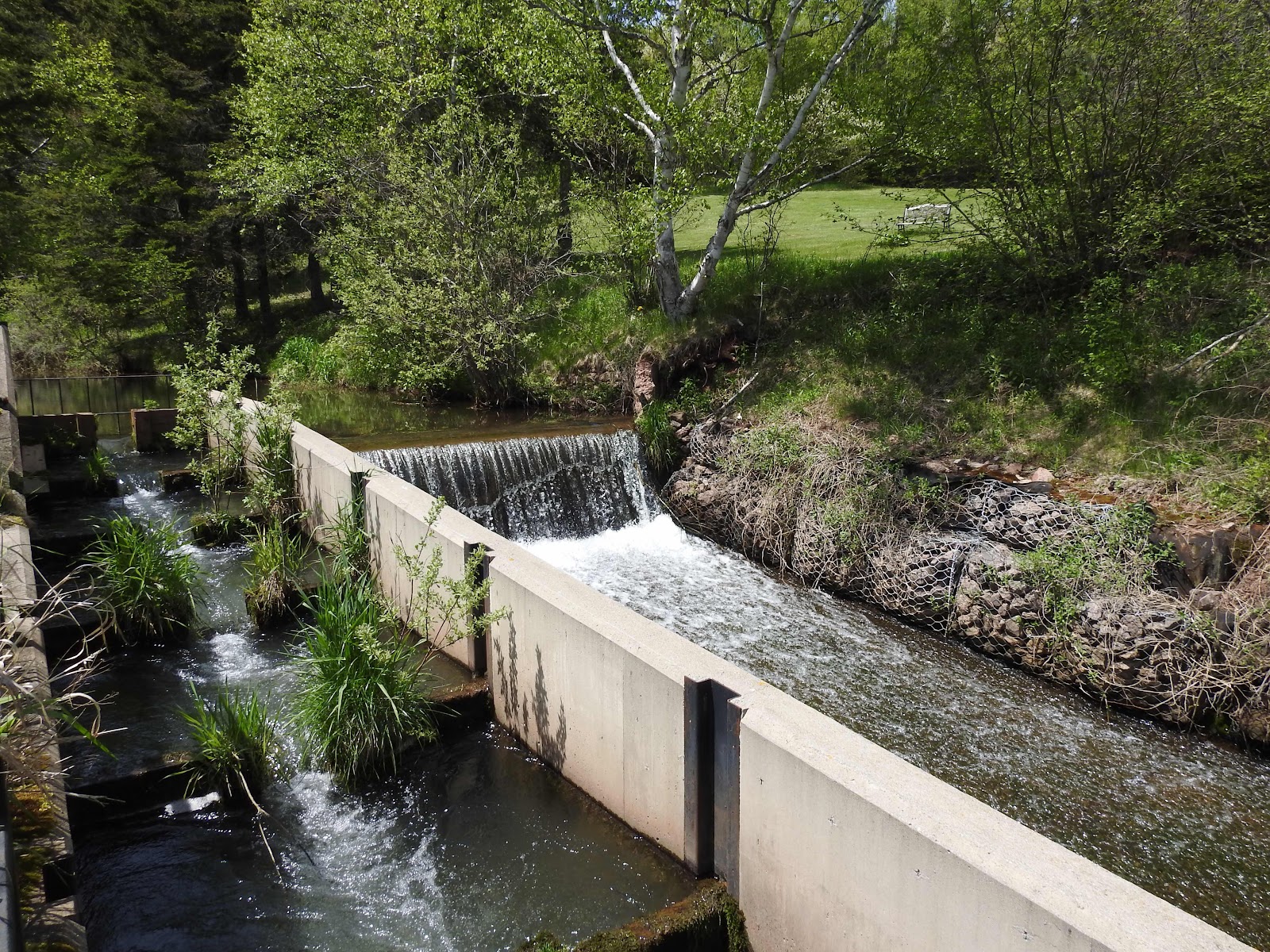 The ladders are the prettiest ones we’ve ever seen, with  plants on either side of the gaps in the steps. 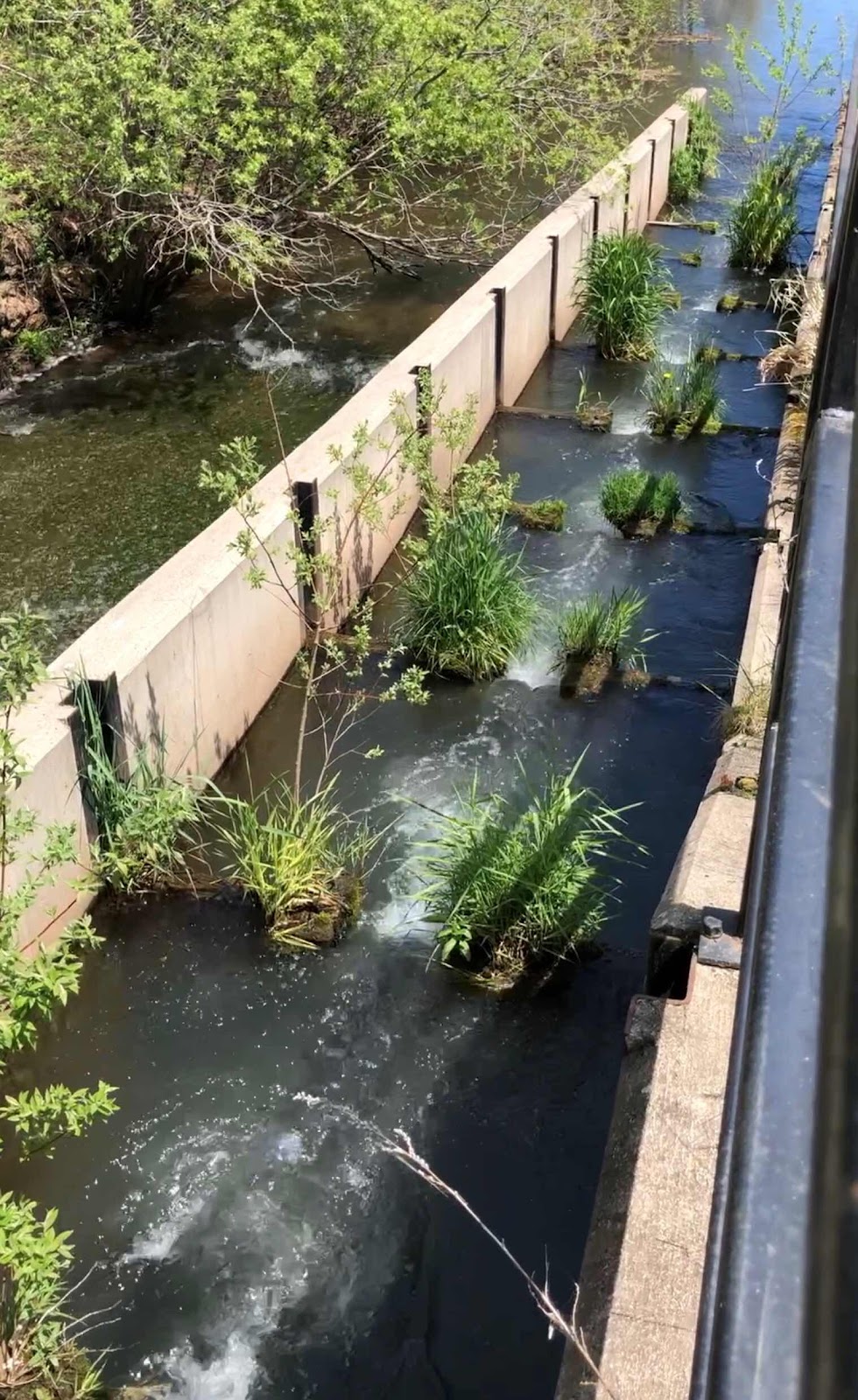 The sound of the water over the falls fills the quiet as do the voices of excited children.

A pair of geese and their two goslings swam up the pond and tipped bottom up for food. The goslings did the same. 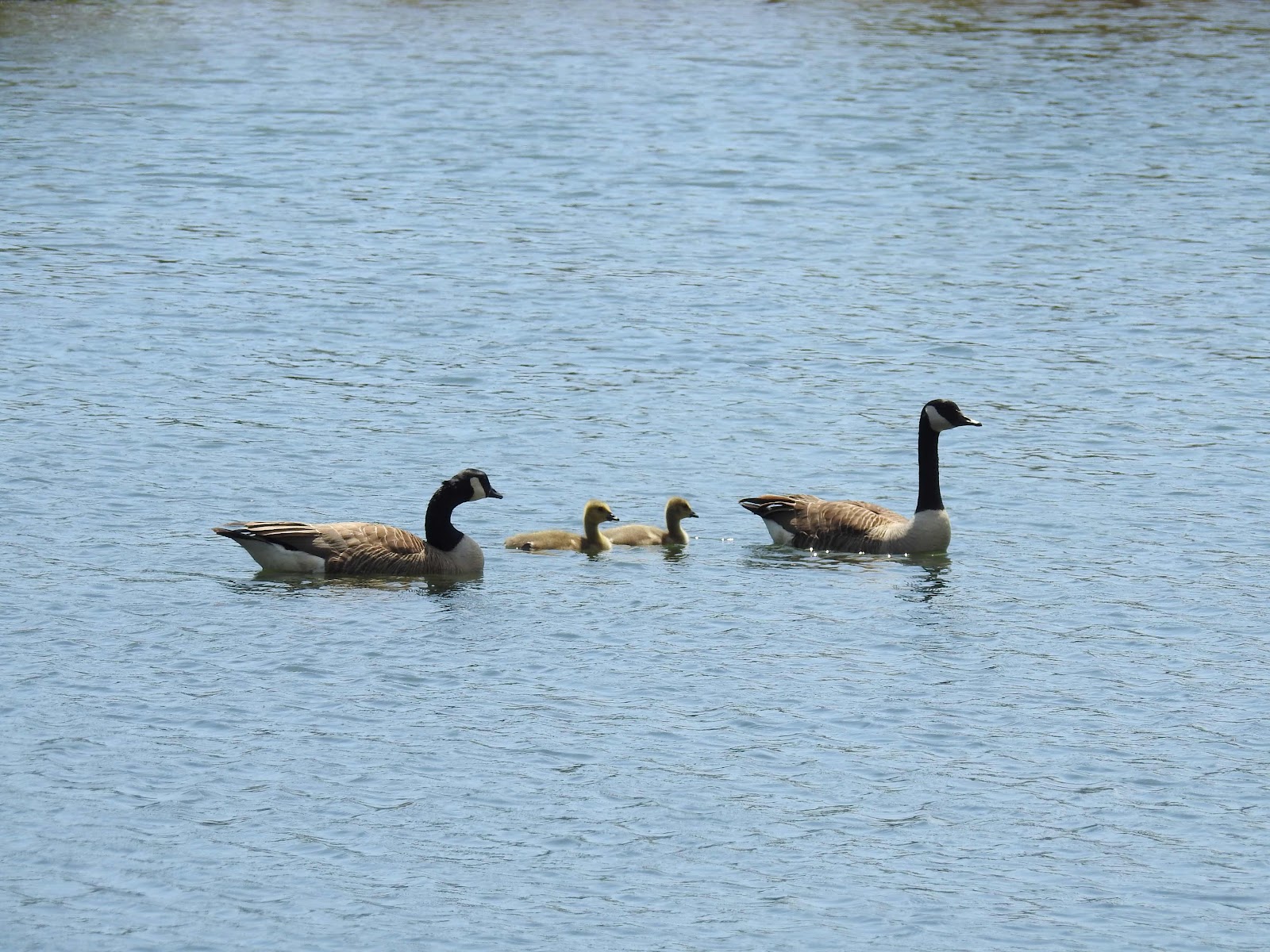 We could hear other geese as well, and before long they appeared but without any goslings. 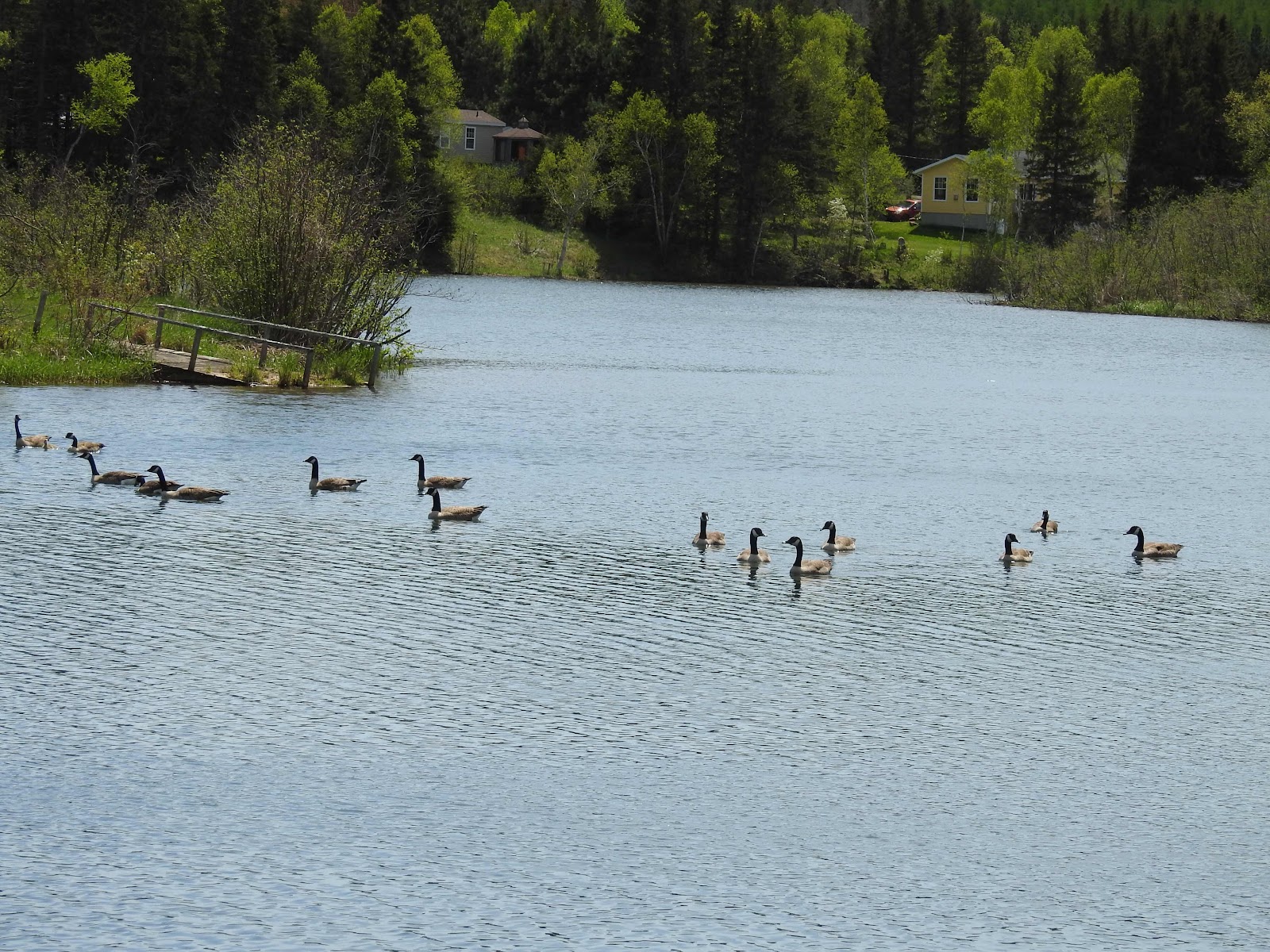 These may have been immature geese which didn’t mate this year.

We finished the afternoon with ice cream at one of our favourite dairy bars.  Owen had the first ice cream cone on his own and thoroughly enjoyed it by the look of him. While his sisters practised doing cart wheels and the splits, Owen joined in, doing his version of the splits too. 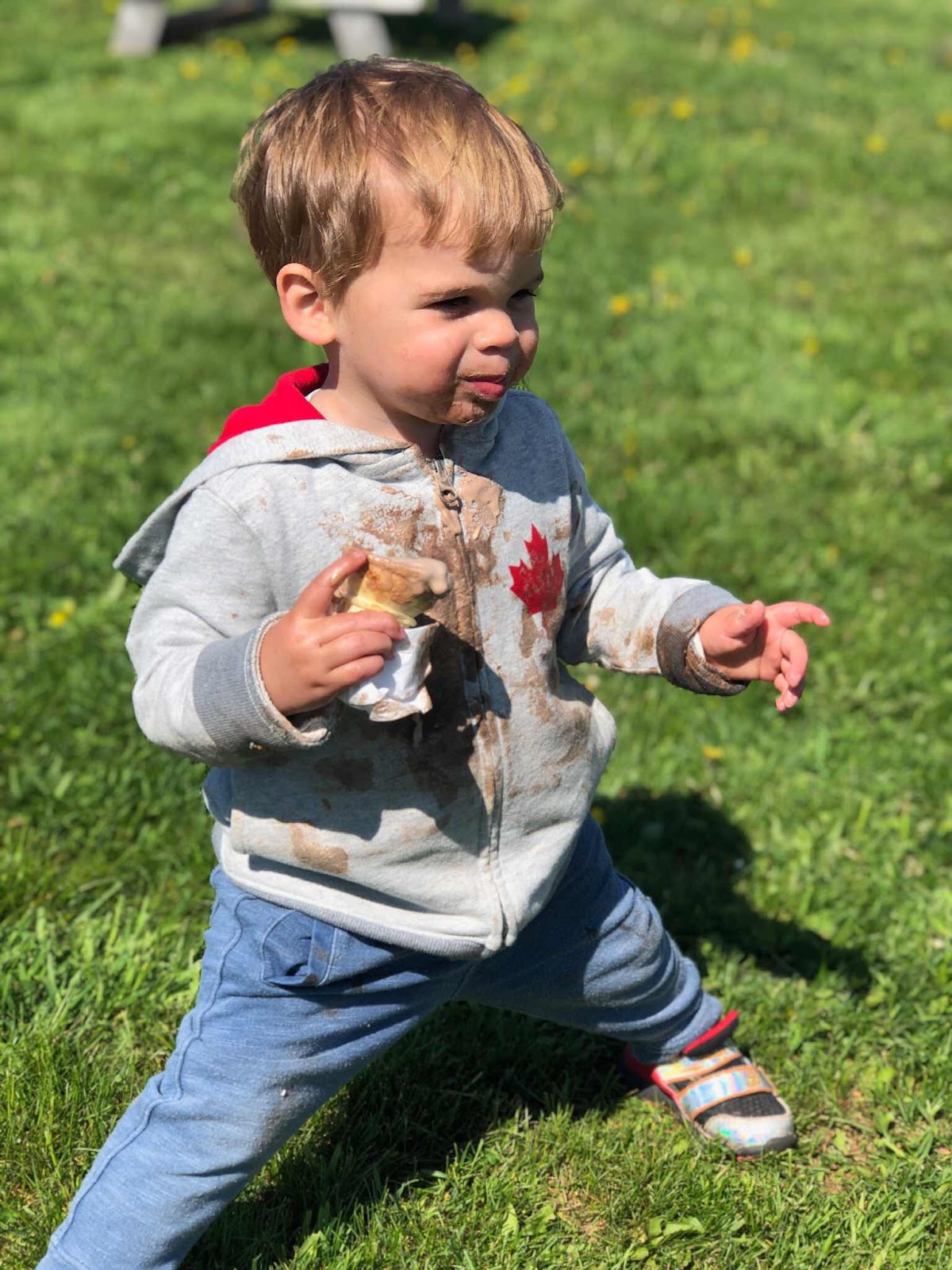 It was a fun day!

Hello, the grand children are adorable. A picnic and fishing sounds like a fun time. Love the geese family, the goslings are cute. Wonderful photos.

Wishing you a happy day!

Do you mean to tell me that there's ICE CREAM on Prince Edward Island? LOL

Truthfully, I never got the whole fishing thing. I think I am wired too tight for that. But I do enjoy watching the kids take part. Looks like a great day of life Marie.

The family looks to be having a great time. The fish ladders are indeed pretty. Very nice design! Your first photo is great of the geese and goslings. Thanks for taking us along to Cavendish Grove. Hope you are having a fine week!

I tend to agree with Owen about the fishing; much more fun splashing about in puddles than staring at a float. Anyway who wants fish when you can have chocolate ice cream?

Lovely pictures. That fish ladder is very pretty. Sounds like a fun time was had by all.

Sounds like you all had a fun family day with some great weather. What a great way to spend a day.

A wonderful outing with equally wonderful company.
I learned about fish ladders from a blog (perhaps this one) and agree this one is very pretty.

What a great little mimic, that Owen.

Now that sounds like a perfectly delightful day. I love your photos.

What a lovely day you had with your family. I have never caught a fish and don't think I could whack it on the head if I did catch one! I do like watching people with their fishing lines though as it looks like a great way to spend a few hours by the water. I think I'll stick to reading a book by the water's edge.

What a beautiful outing, and I love the story about Owen's attempt at the splits, too. You sure do have a knack with words, Marie. Love this post :-)

We can tell it was a fun day!!

It is so nice to be out and about with the family.

Great photos. I am no fisherman, but I used to enjoy trying on Lake Kariba in what was then Rhodesia. Have a good weekend, it is nearly here, Diane

Such a lovely family fun day.
I enjoyed your photographs.

an awesome way to spend a sunny day!! that owen is adorable!!!

Please excuse a second comment. One of the joys of blogging, and one may have to blog for a while for this to happen, is for someone to leave a comment on the blog which leads me to finding their blog. I have found a few excellent blogs this way and yours is one of them. Tonight I stopped by just to see if you had a new post I hadn't seen. Not finding one, I took a look at your Blog Archive and looked back a few years to June of 2015. This is what I like: I found your post of Tuesday, 2 June 2015, about Time Pieces. I am one who loves clocks and your post was a joy to read. https://islandmusingswithmarie.blogspot.com/2015/06/time-pieces.html Thanks, Marie, for sharing your blog. John

Delightful beyond words, Marie. I can picture all of it!!! I especially like Owen's sweatshirt. HA!

Owen certainly is growing up. Won't be long before he is out there fishing with the girls. Sweet times.

Oh these little precious faces are so Cute :)

thank you sooo much for virtual trip to your gorgeous surroundings dear Marie !


the ladders and the pond is so compelling!

family trips are always most cherished thing ever