We went to see the geese family again but the birds weren’t in the basin where they had been the previous week. Both my husband and I had sore muscles so we decided not to walk that day. Instead, we enjoyed the location and had a picnic. 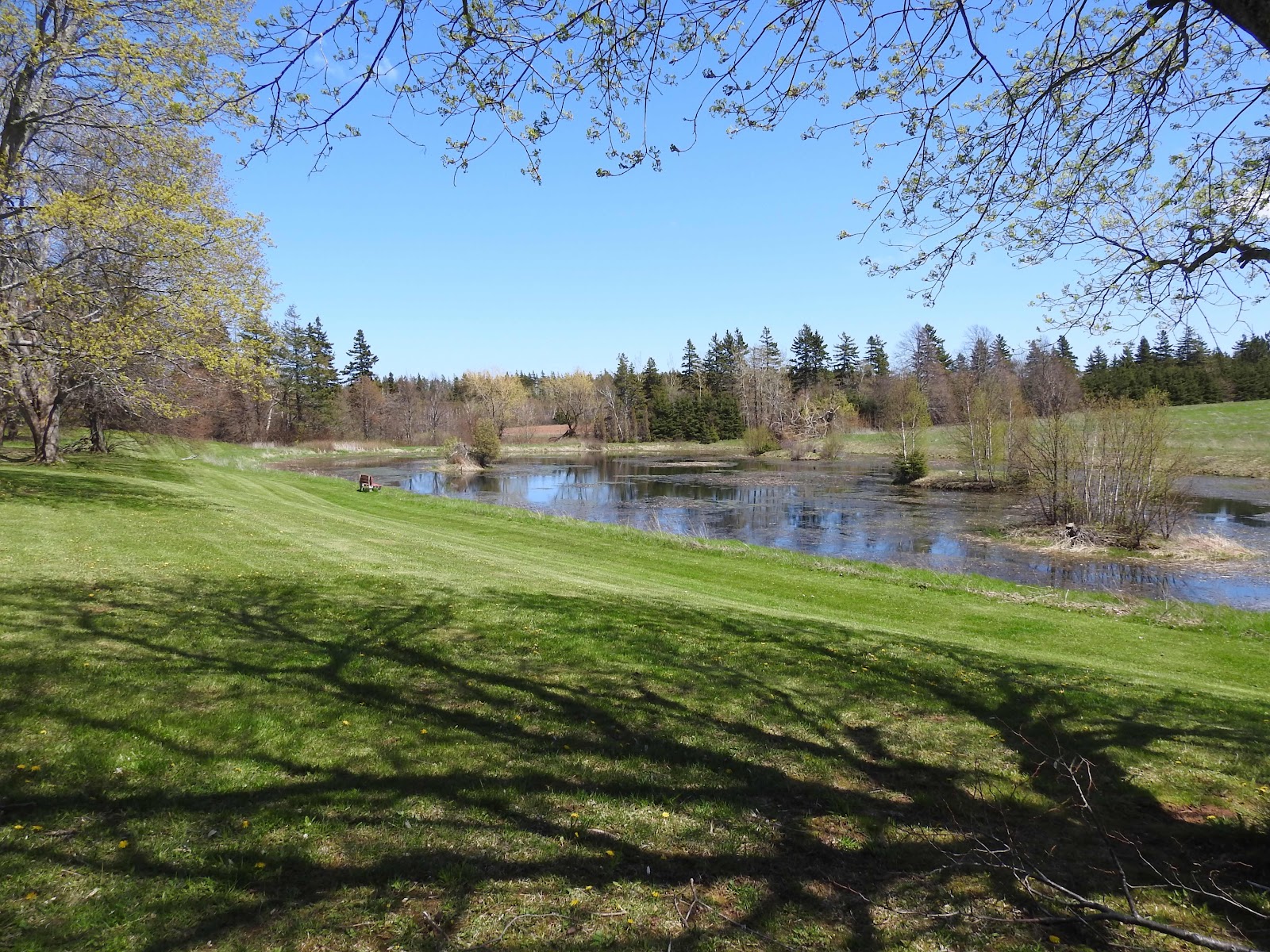 As we ate lunch on the bench, a pair of Mallards swam in the pond. We watched as they dabbled their way around, unconcerned by the spectators on the bench nearby.

In front of us, a Yellow warbler landed on some floating straw, appearing to rest before it went on its way. 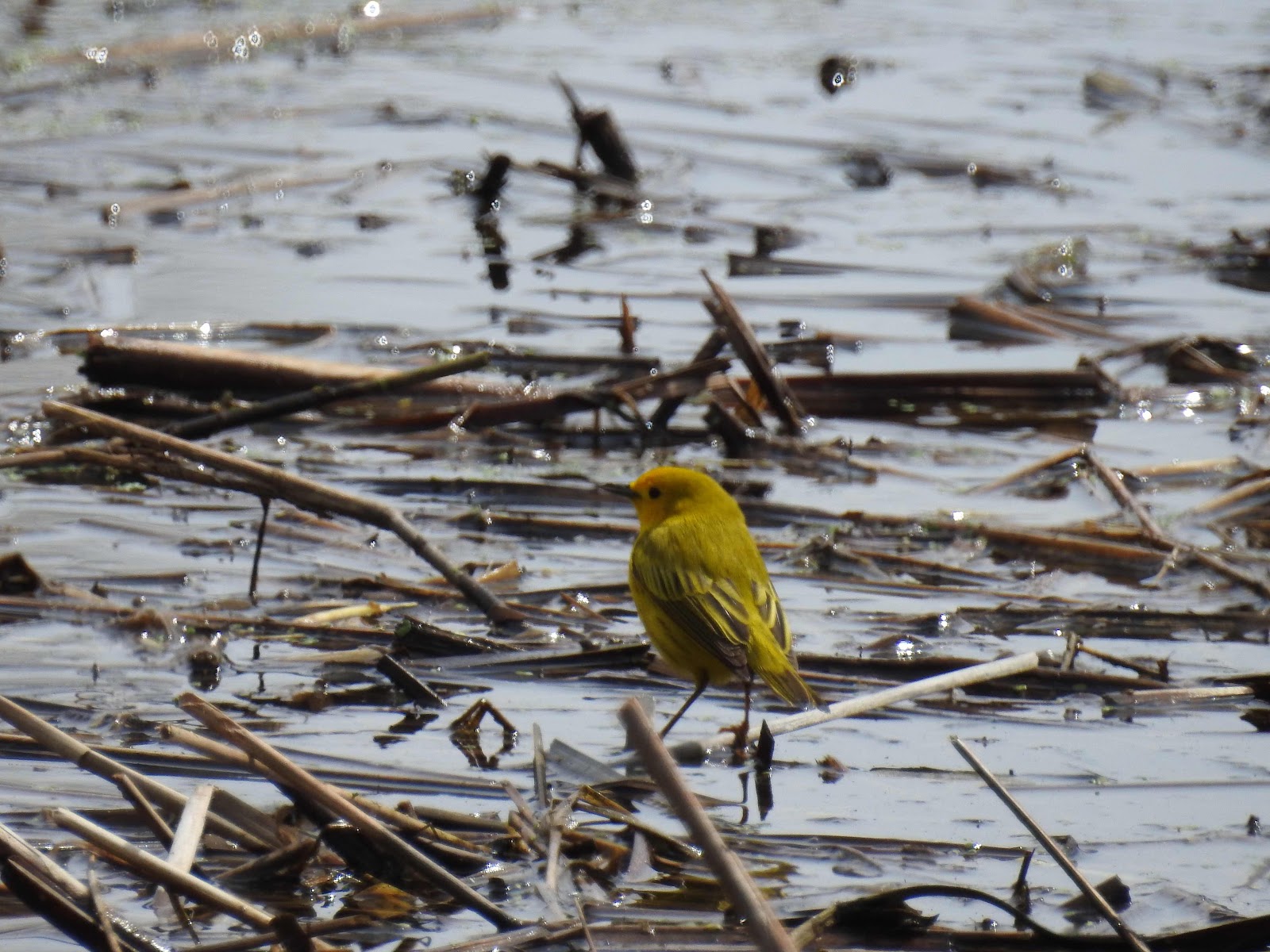 On the islands in the basin, the leafless trees made it easy to see the tiny Yellow-rumped warblers which landed among the branches. 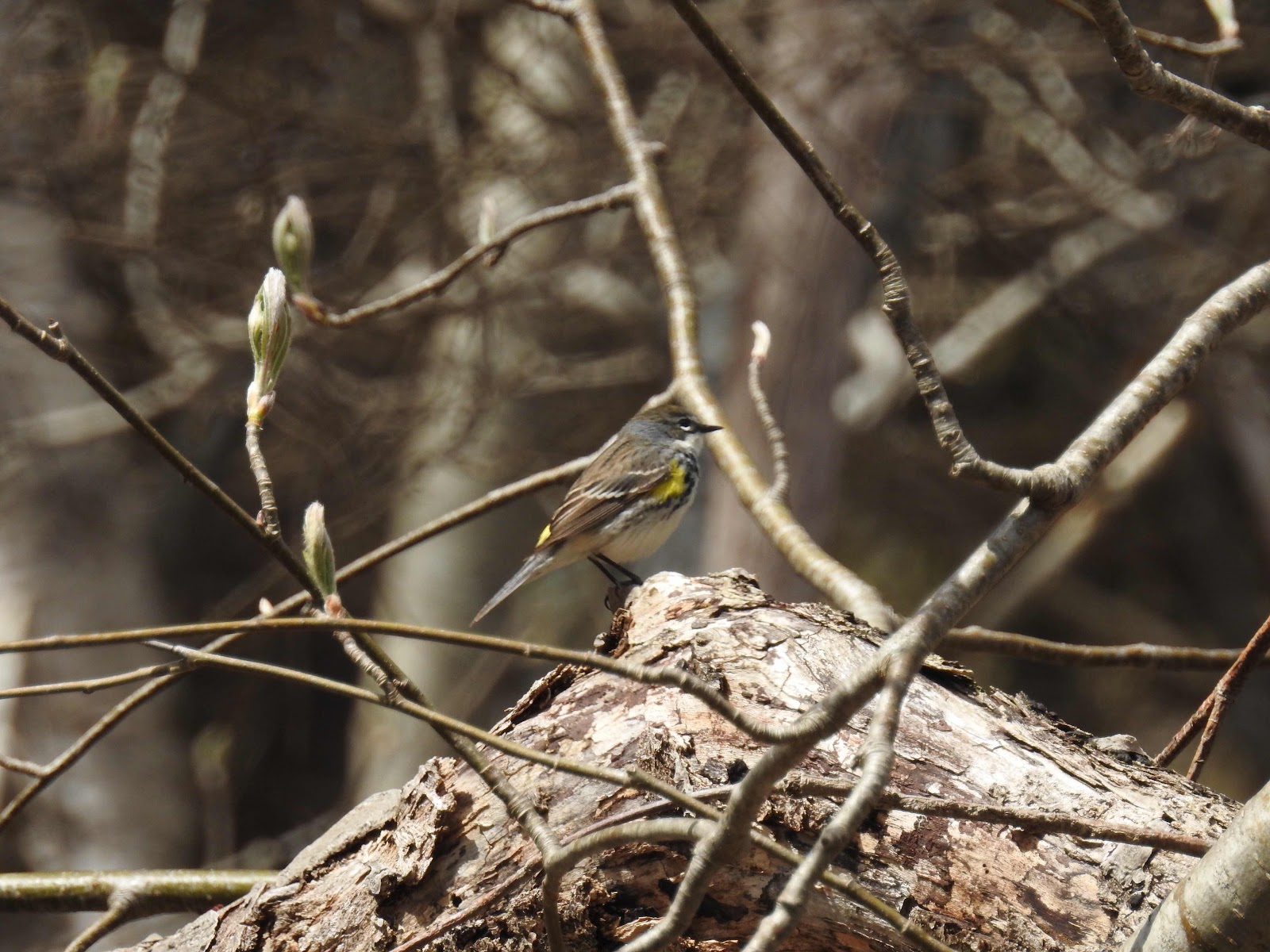 A larger bird, a male Bobolink, entertained us with its song for the longest time. 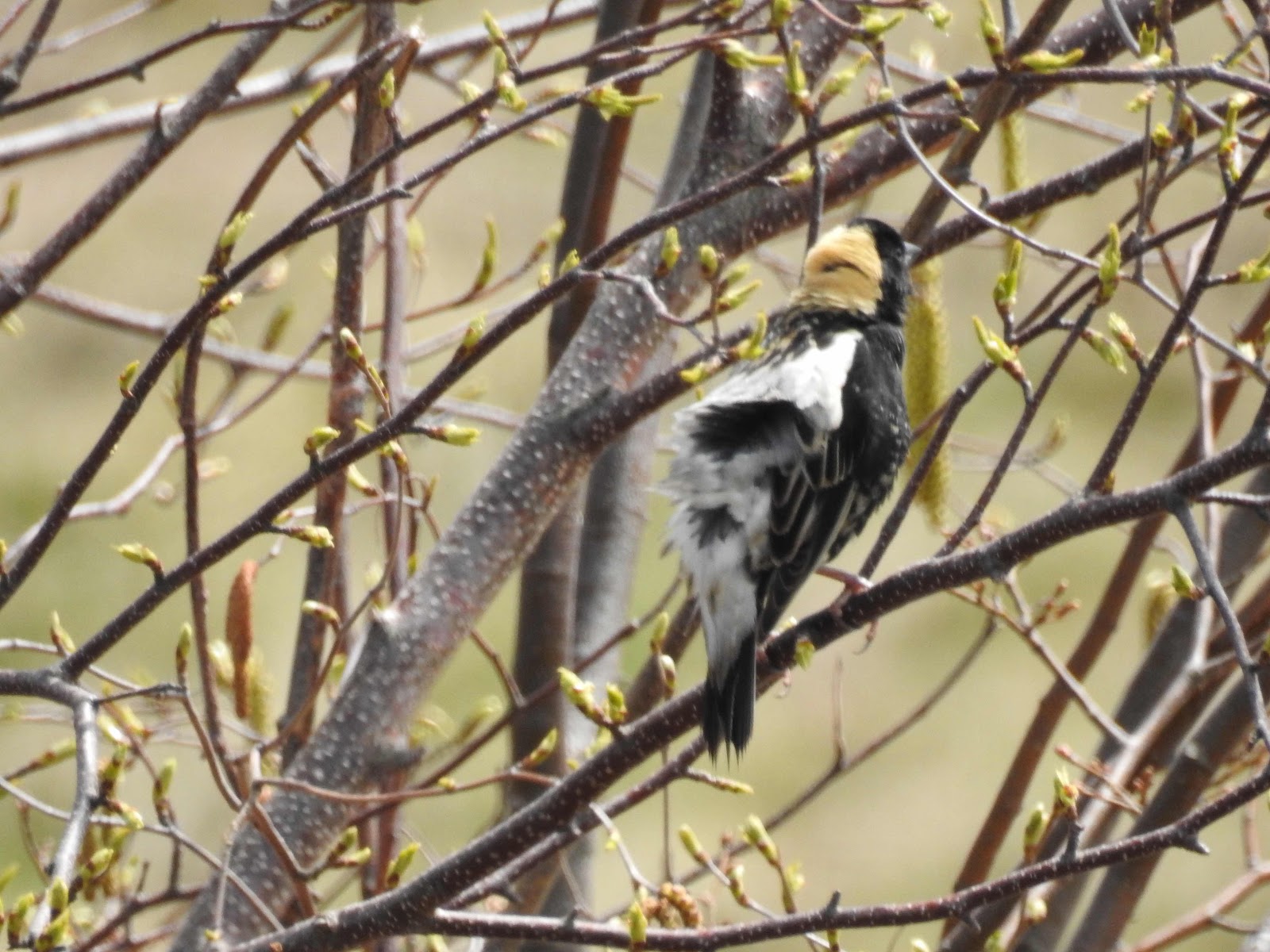 These birds nest in hay fields but cultivation practices and pesticide use has affected the population making it a threatened species. I hope this male found a mate and a safe place to nest. 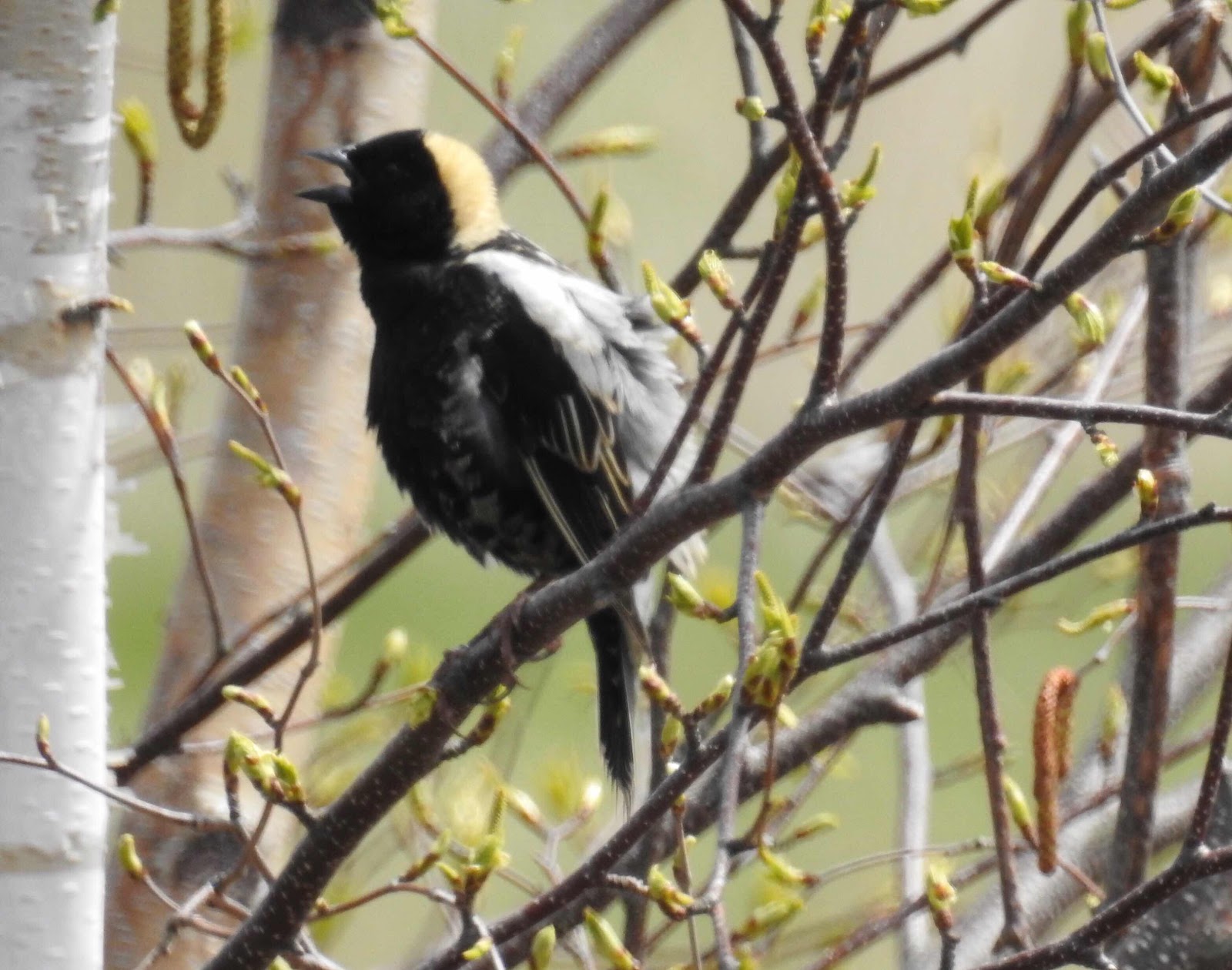 The noisy male Red-winged blackbirds were everywhere but we don’t often see the females. However, a female stayed on the bulrushes long enough for some photos. She has a touch of colour around her beak. 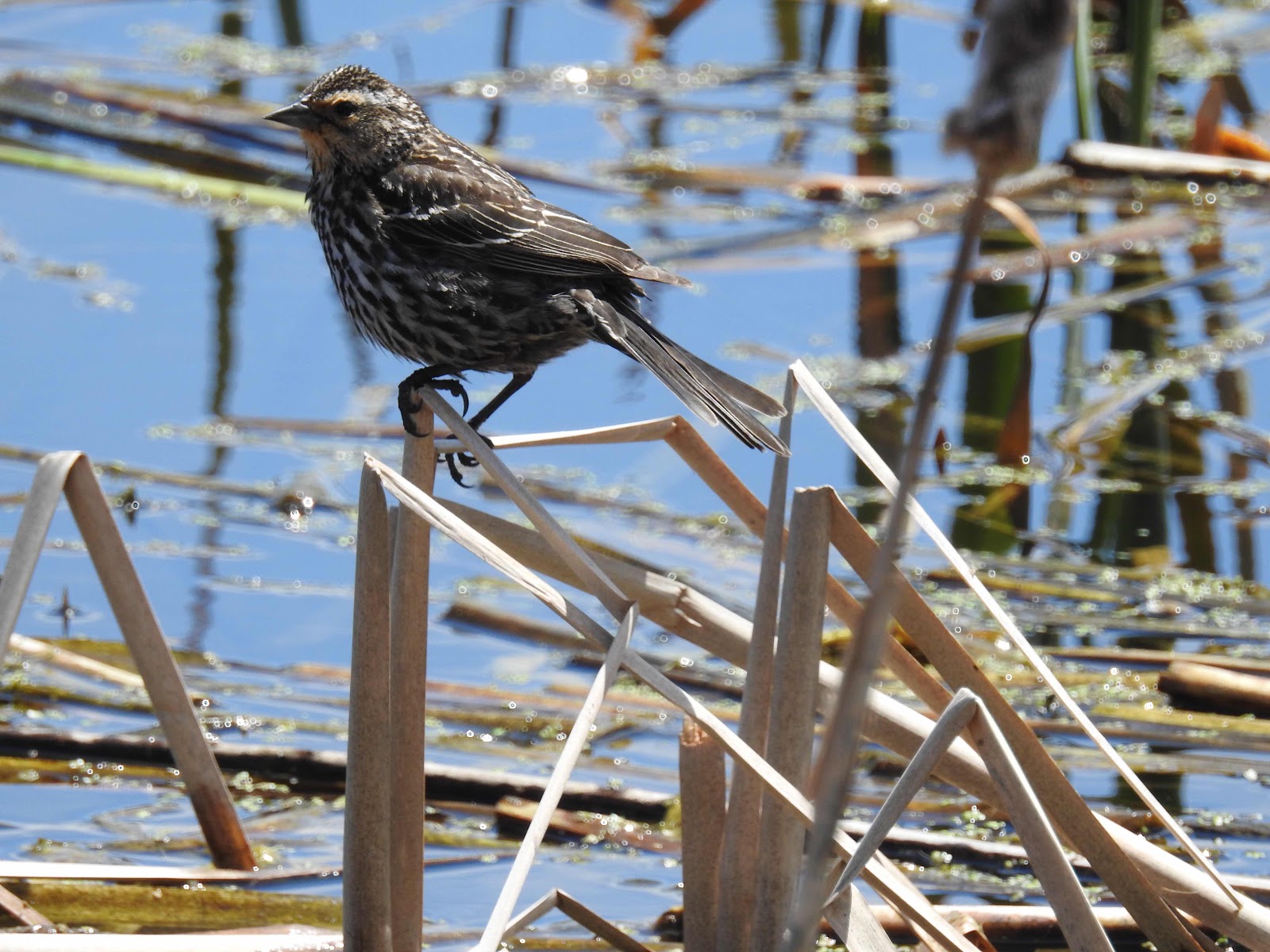 In the trees behind us, a Northern parula sat and entertained us with his trilling song. It is the first time we’ve seen this bird which looks almost grumpy. 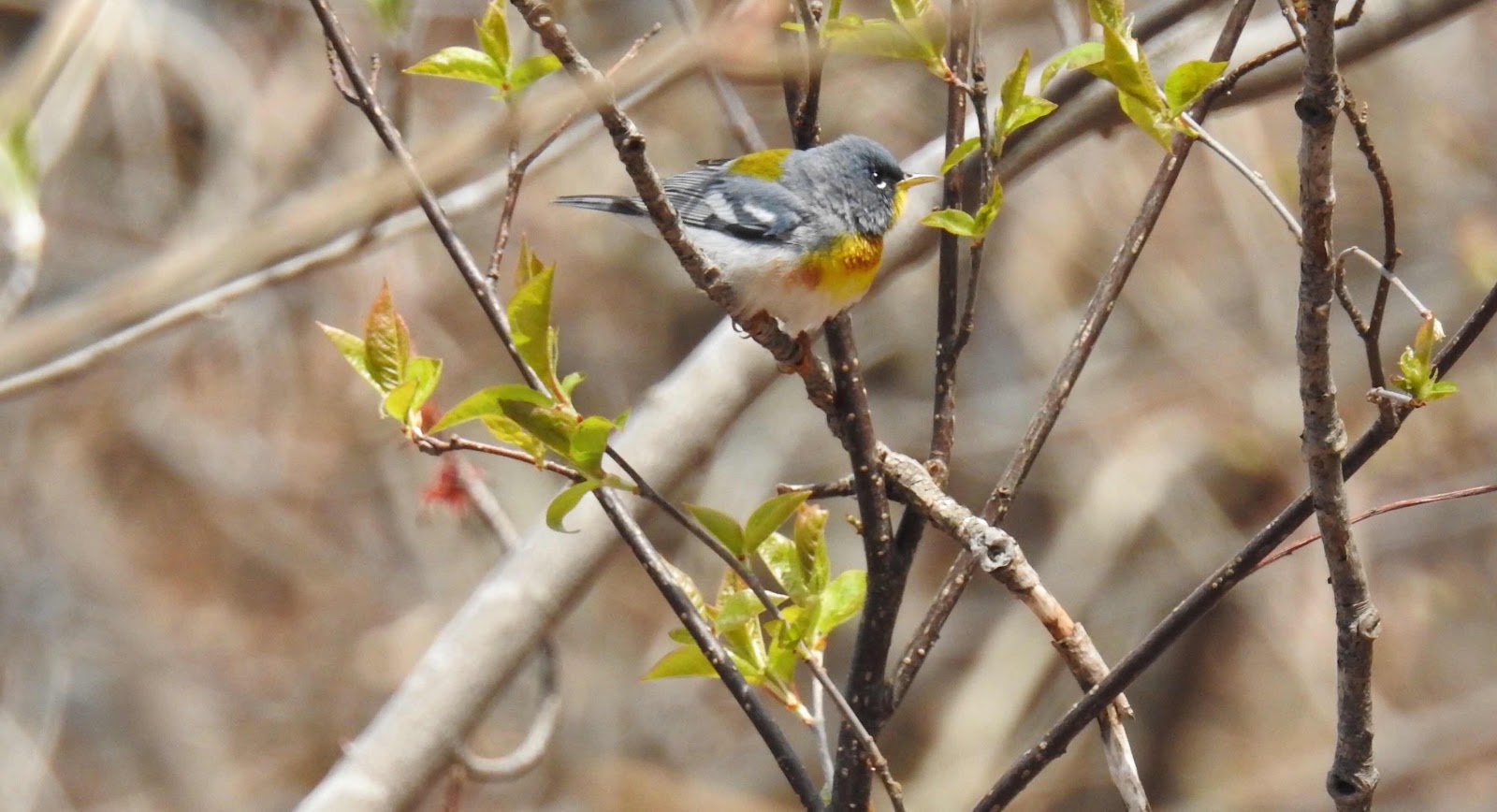 A male Gadwall flew into the basin and spent his time among the bulrushes. 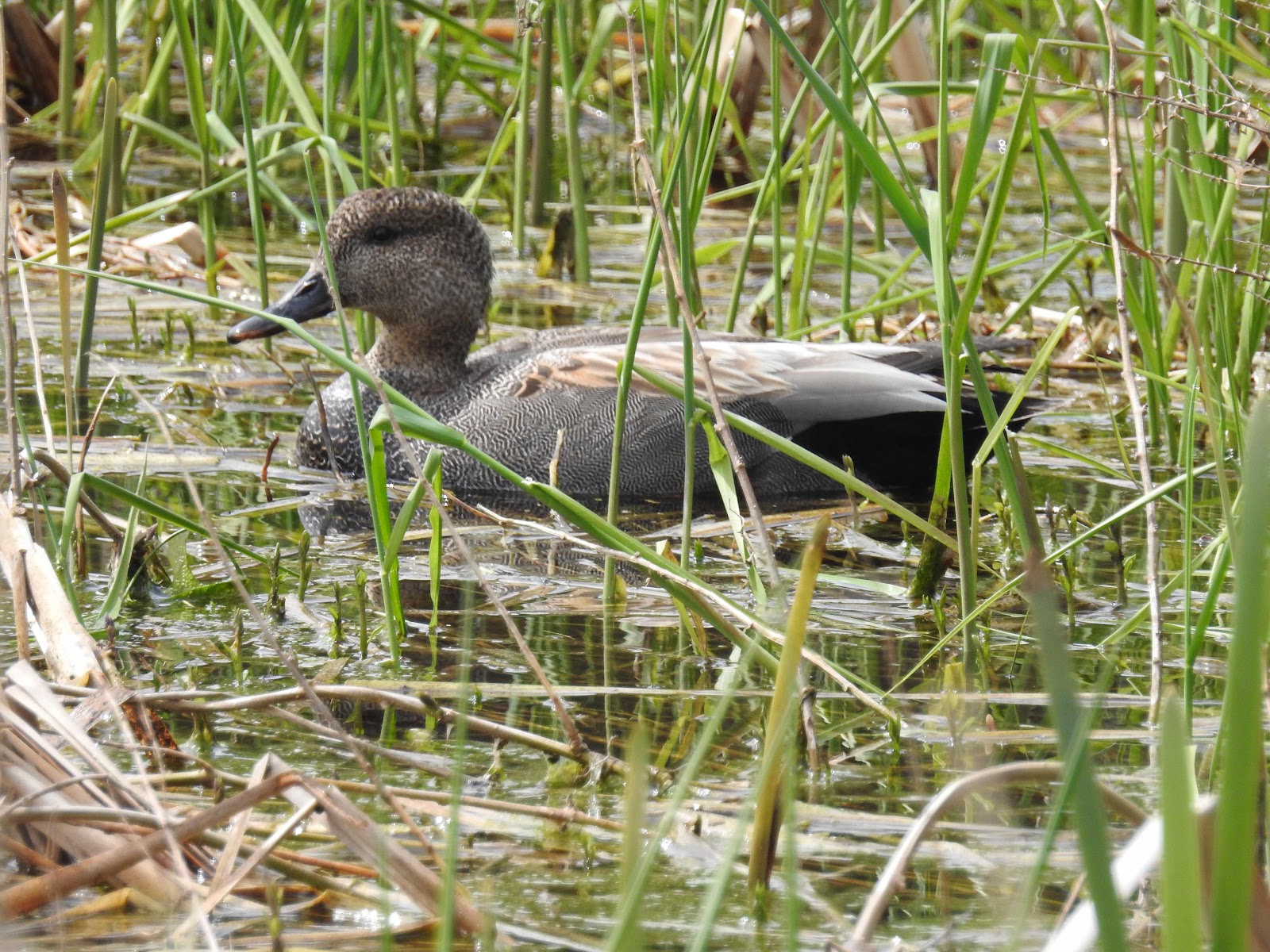 It was a great lunch spot, 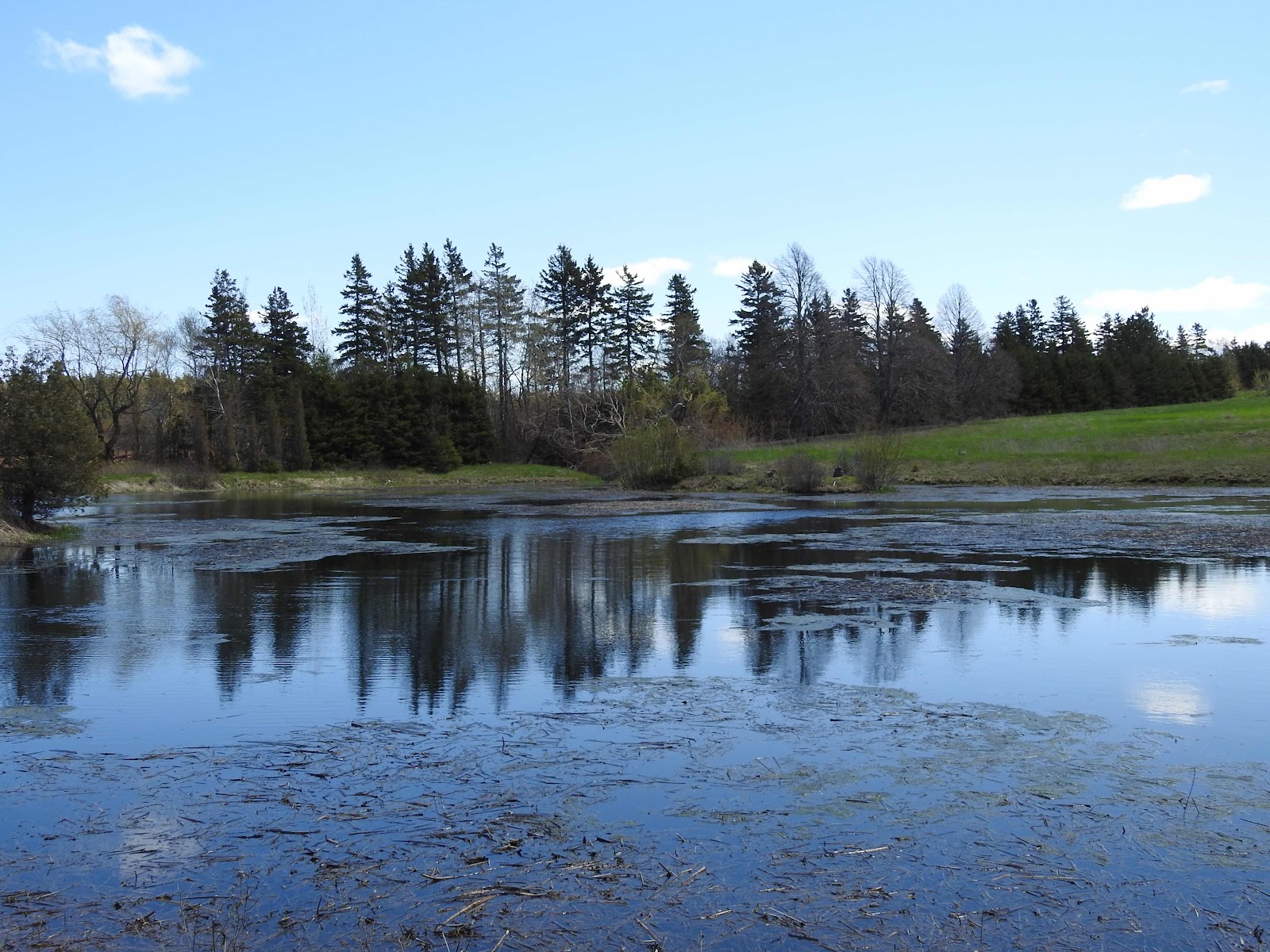 the ambiance was perfect and the food was just the way we like it. And the entertainment was world class.

Serenaded while you ate -- nice!

You have a wonderful zoo of birds to watch just sitting ona bench!!!

You always unfold the scene so well.

What fine birds! I love the pretty warblers especially. I was curious as to why you were both sore: was it a shared walk? My quads were really sore after last week's hard hike, but they are fine now. :-)

What a wonderful lunch it was and that with plenty of company. Great day.

What a pretty spot!

this was an AWESOME lunch spot, you saw so many gorgeous birds!!!

your pictures are amazing!!!

Nature provided you with a soundtrack of lovely birds to enjoy your lunch with. How great is that, priceless I would say.

I'm in a fight with 4 mourning doves right now. I never knew how pissy they could be! We inherited a nest on a hanging plant on our patio. Mama was nesting, so we waited for the birds to fly the coop, literally, waited a few more days to be sure, then removed the hanging plant with the nest. The four of them now (mama, daddy, and the two 'babies') have been harassing us ever since. Flying up to our windows batting their wings, and try to set up shop on the patio high ledge. I wish they'd just give up and go nest somewhere else.

Great place for a picnic. The birds are gorgeous. I had planned to go bird watching with a group this morning (for the first time) but it rained last night and I decided to skip it this time. Maybe I should invest in a pair of rubber boots or hiking boots. : )

I looooove your lunch companions Marie, absolutely delightful and such excellent shots. It really does make me sad when I think how we humans destroy the natural habitat of so many creatures ✨

What a delightful spot (and company) for lunch.
I have seen those yellow warblers described as butter butts - which makes me smile.

A great medley of birds.

Sometimes you just have to be bird-watchers, and everyone knows you kinda have to stay put and...wait and watch. YAY for us who get to see what you saw on such a beautiful day!

You have so many birds that I've never seen here in the Southern part of the U.S. and I loved your descriptive prose … the Northern parula really did seem grumpy … not a usual bird trait !

Love your photos and I would happily join you there for lunch to see all the companions that joined you, Have a good day, Diane.

Even the simplest fare would be delicious in such gorgeous surroundings with birdsong to serenade.

what a gorgeous and tranquil place for sitting and having lunch dear Marie !!!


how wonderful that you spotted some pretty birds around you :)

nature is magical and embracing it makes us forget everything negative

so lucky to visit such beautiful areas every day my friend!

Wow. What a large selection of birds. So exciting.