On a recent outing, we drove to see the geese family we’ve been following. When the family wasn’t in the basin at Cavendish Grove, we relaxed and had lunch. After lunch, on the way back to the car, we noticed goose feces on the path to the upper of three ponds in the area. My husband and I followed the path and climbed the embankment to the upper pond. Geese and goslings swam there.

Two of the geese in this pond had seven goslings. 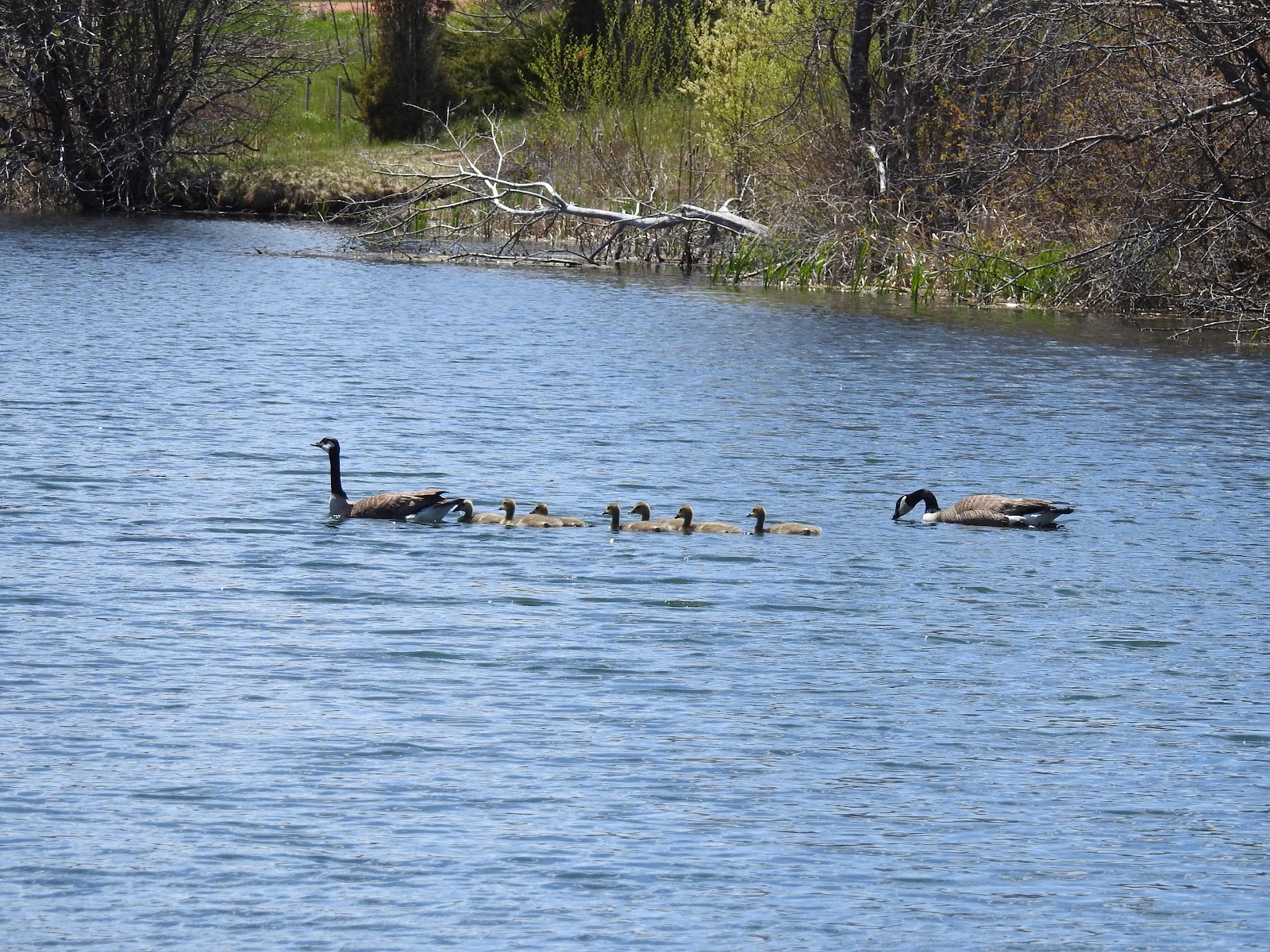 Our family had six.

In addition, there were four geese and eight goslings in another group. 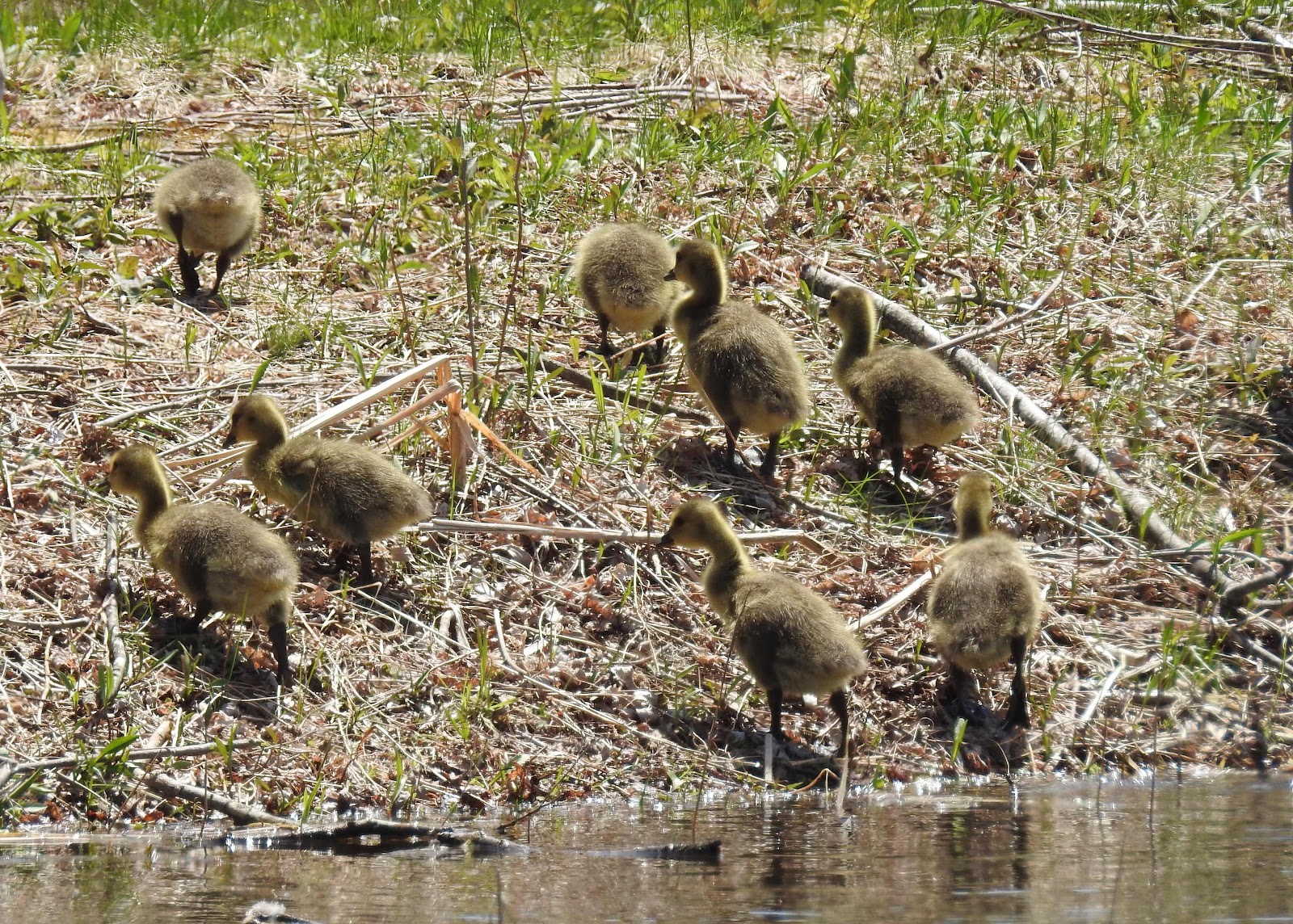 Had our family joined two other adults with two goslings? This group of four adults and the eight goslings did everything together, a little gaggle. 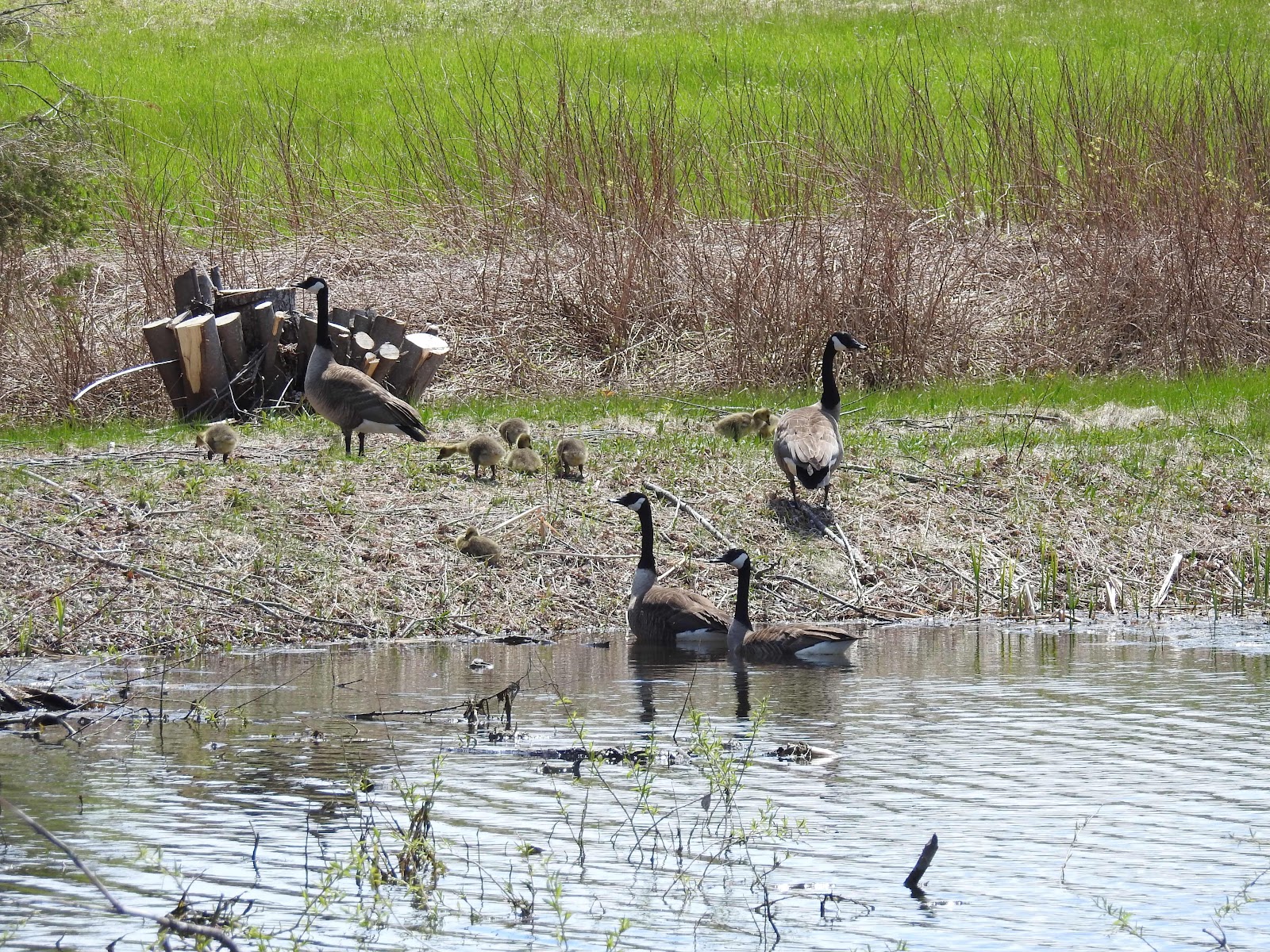 Could our geese family be here?

I discovered subsequently that adult geese lose their large flying feathers, or molt, some weeks after the goslings are hatched. It takes them four to six weeks to grow back the feathers. During this time, they and the goslings are vulnerable to predators such as foxes and ravens. Geese adapt by congregating in groups for more security while they molt. Could the gaggle be evidence of such an occurrence?

We watched both groups of birds for several minutes and decided to return next week to see them again. 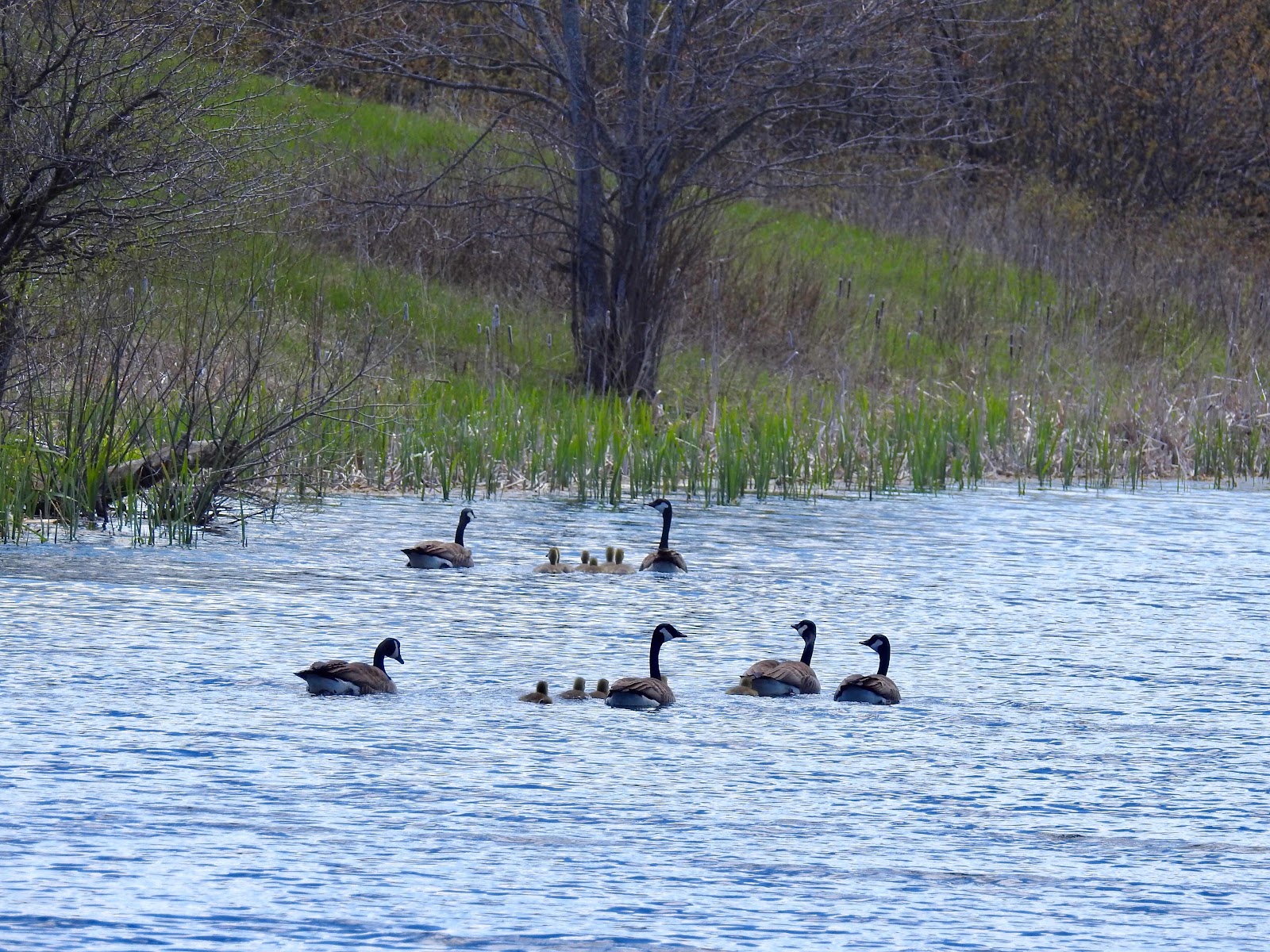 Posted by Marie Smith at 11:21
Email ThisBlogThis!Share to TwitterShare to FacebookShare to Pinterest

That final photo is marvelous!

It will be interesting to find out if 'your' male is there. I hope they come onto land next time you visit. Enjoy your weekend Diane

I think this is most probably the case, safety in numbers. It's the same here with the black swans, when they lose their feathers and can't fly for a while. I hope the babies survive to adulthood. Happy weekend Marie ✨

Interesting, I didn't know that when they molted they couldn't fly. Will be fun to find out if it's the same family. Yesterday on a very busy road here, leading to the freeway traffic was stopped as a family made their way single file across a 4 lane highway!

I learned something new. I did not realize that the geese will join together during this melt season. That would account for the large families that are often seen.

They are interesting birds. The Canada Geese here also have goslings at present.

What a delightful Gaggle...

I didn't know that when they molted they couldn't fly either. Interesting story and observations, Marie.

Gorgeous heart-warming shots.
I do hope where-ever your family is that they survive and thrive.

I was surprised to learn that several years ago about geese not been able to fly when their chicks are young.

That last shot is my favourite.

I hope your family is here with the other family, protecting each other and all those adorable goslings. I look forward to what you find out. :-)

Learning so much about geese. I didn't know about the molting.

Those birds are lovely to see, and good photographs,Marie.

I sure enjoyed your photos. I think we are both fascinated by the geese families. Excellent observation about the geese gathering in groups as they molt. That is exactly what I've observed at Green Lake. Just in the last couple of weeks there have been large groups of geese at different spots around the lake. In early spring I rarely saw that kind of thing. Also, that was clever to follow the poop trail up to the higher water where you found the family. The area where you took your photos for this post is just beautiful. I wonder if there is a name for the lake(s)? Thanks, Marie, for sharing.

i love that these sightings move us to research about what we are seeing!! it is unusual for all goslings to survive. your pictures are beautiful!!!

I did not know they couldn't fly for a while

I thoroughly enjoyed this family either dear Marie

you captured them so ELEGANTLY!

your photography is inspirational my friend!
hugs!

Nice pictures - families of birds are always good to watch.

What lovely photos you're sharing with us - thank you, Marie. I may never see wild goslings in person but your photos make me feel I was there.