Low tide is special at Canoe Cove. There are numerous tidal pools which provide ample opportunity for exploration and discovery. 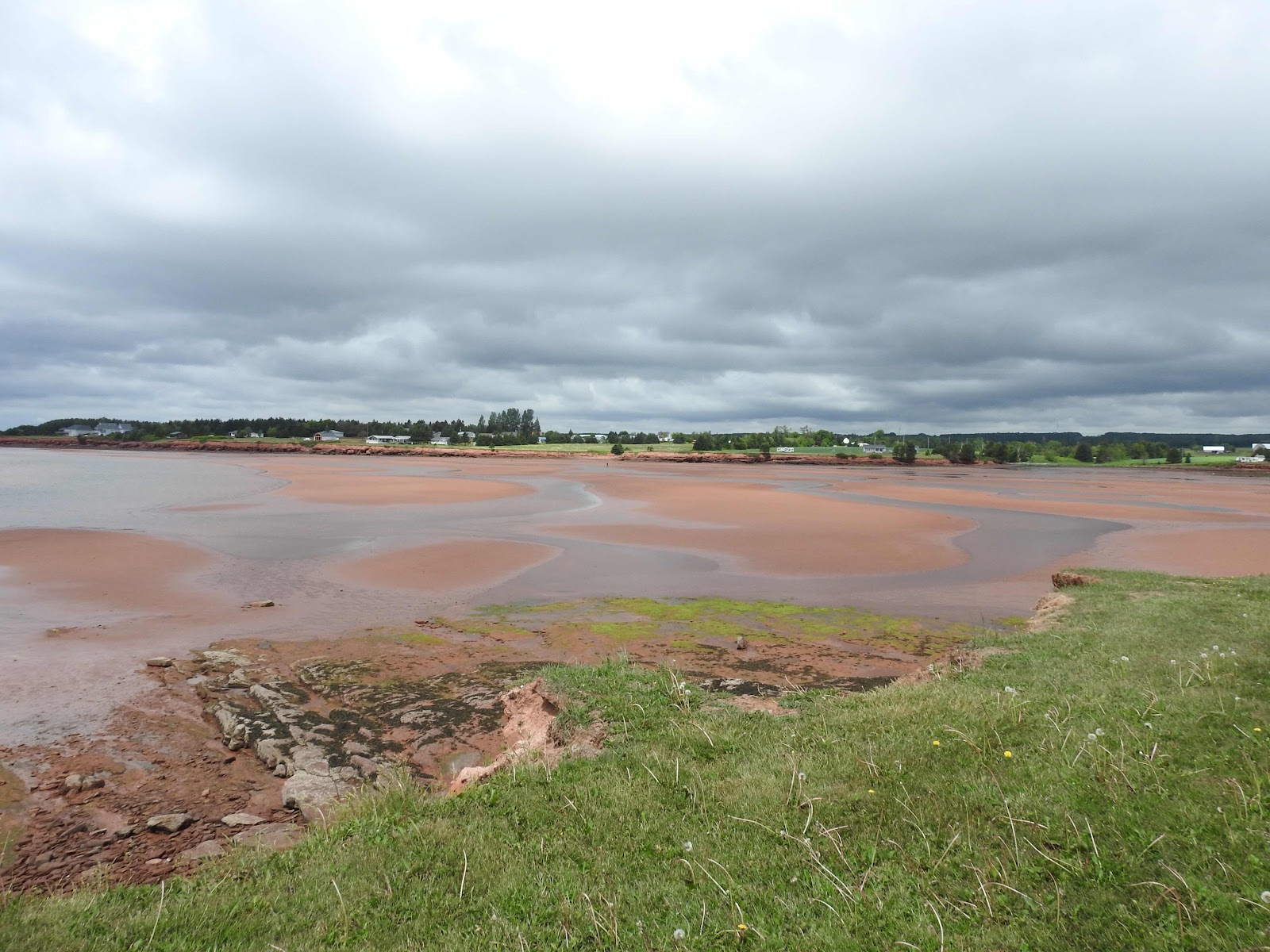 My husband and I recently accompanied our daughter and the three grandkids there and we had a great day. It started with a picnic. Social distancing isn’t a problem there. 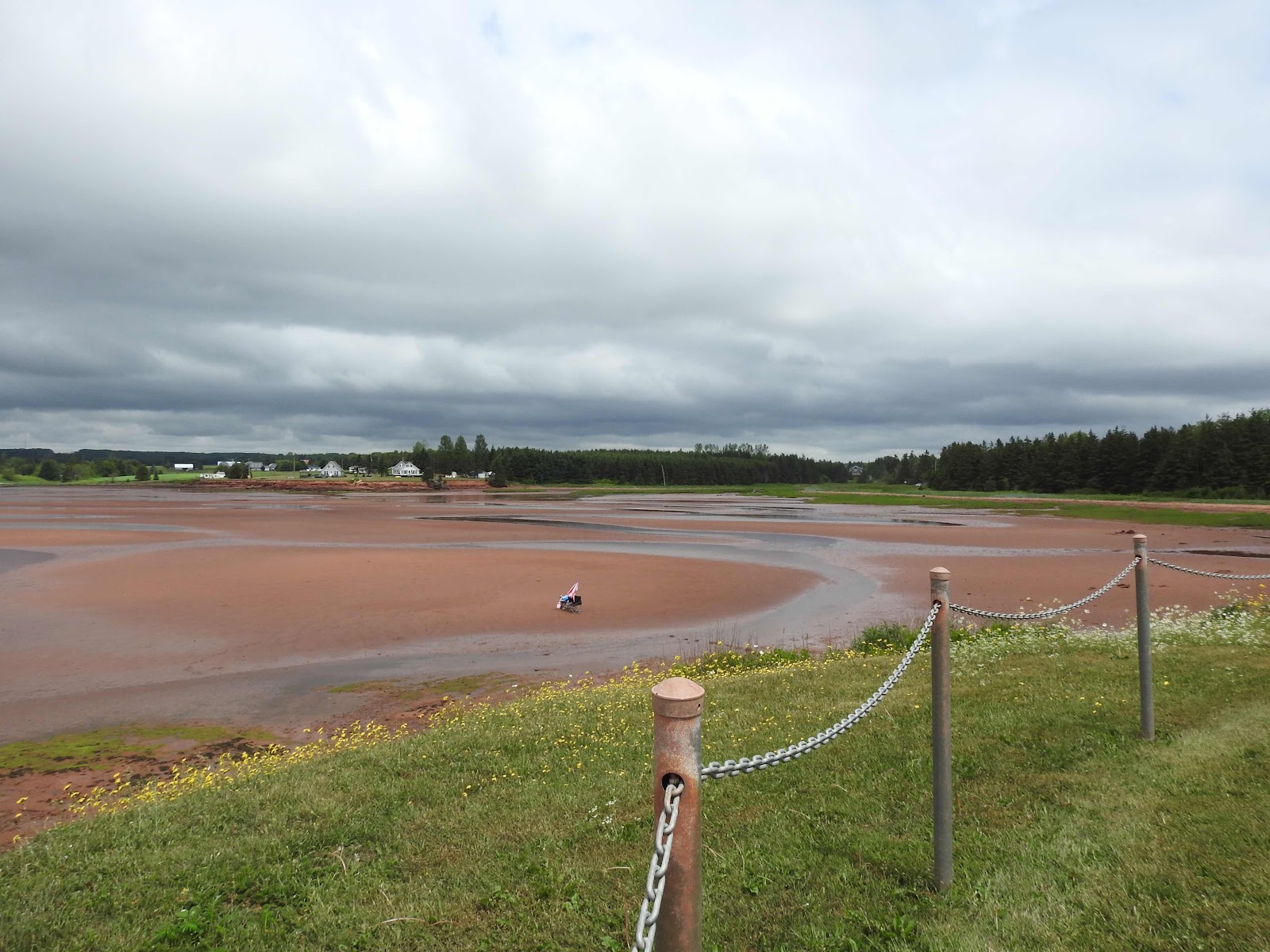 Along the beach, starfish were a big hit with the kids. The purple stars, 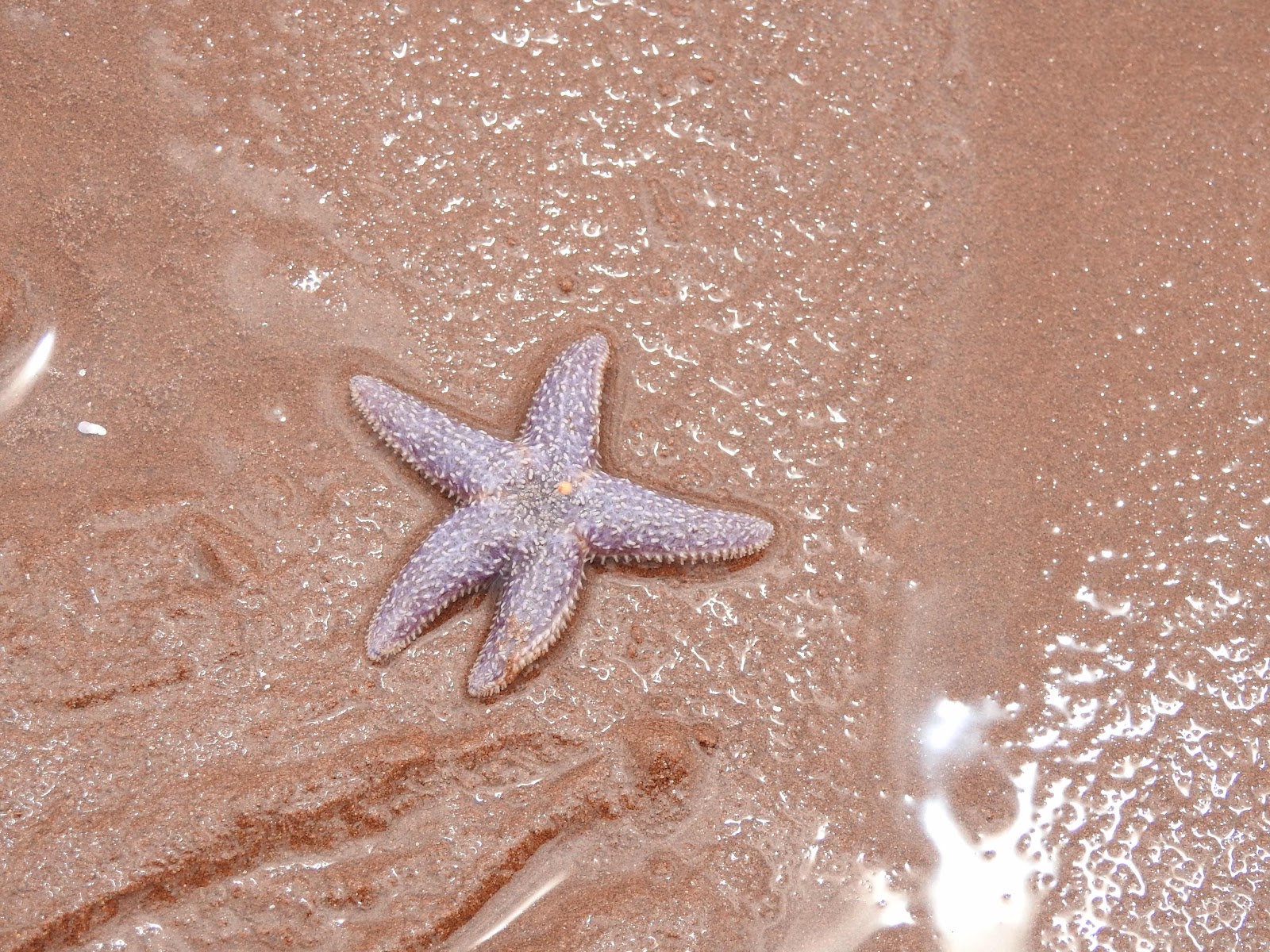 some tiny but all small, were the first starfish the children had ever seen and they were so excited. We found some of them on the damp sand waiting for high tide, so they gently scooped up the little stars and placed them back in the water.

Hermit crabs were a huge hit as well. We saw an occasional tiny crab looking for a new shell. The children watched the small creatures and wished them well in their search for a new home. The beach had lots of remnants of crabs and we even found one big enough for dinner but let it go.

The exposed sand had holes where we found razor clams if we dug deep enough. We also found soft shell clams and bar clams. 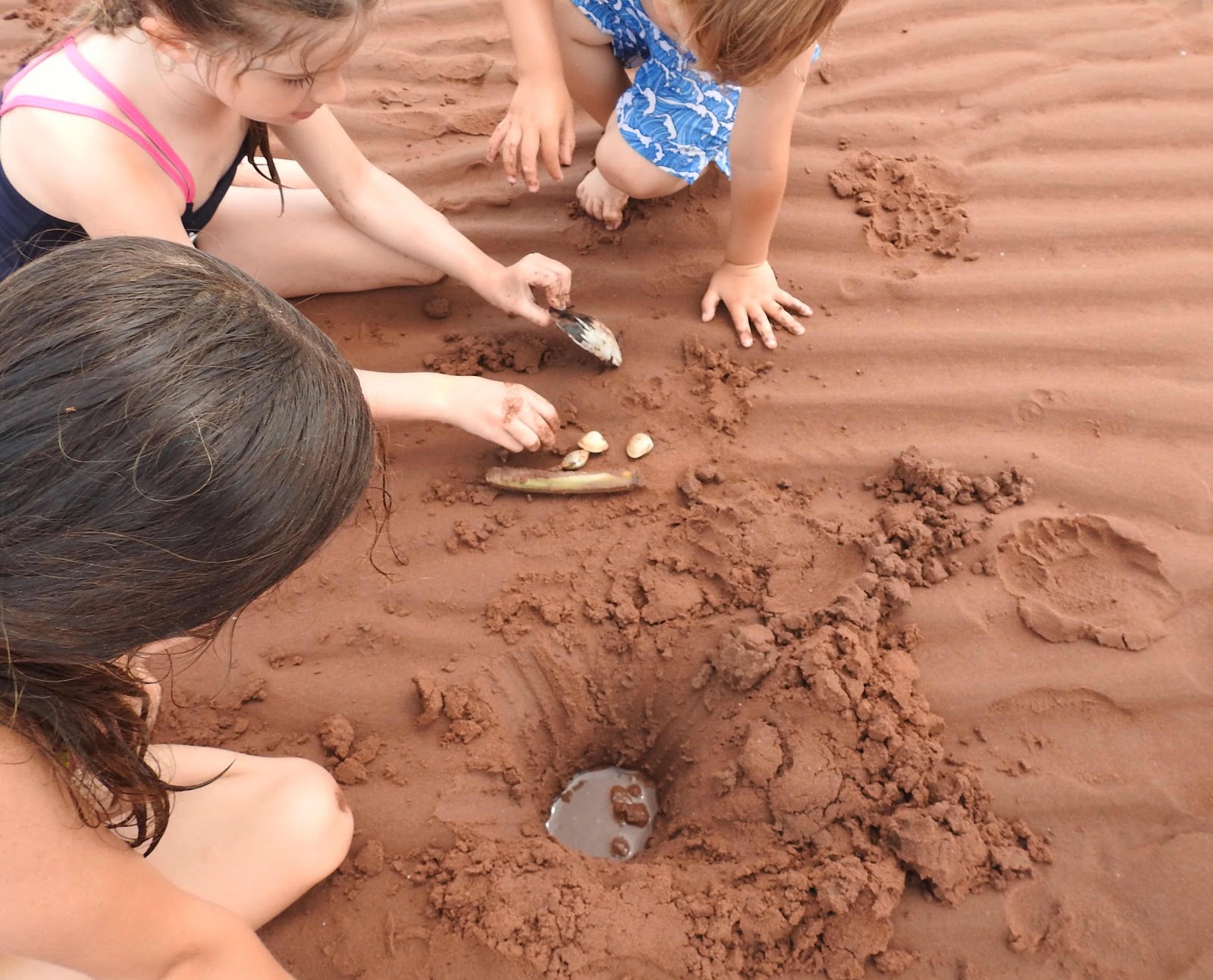 We have never dug clams for food but intend to do so this summer. These clams were put back in the sand. I can imagine a time when clam digging was an important part of the food supply for many islanders.

Meanwhile, the Bank Swallows were darting around the cove as well, but unlike the last time we visited, people stayed away from the area of their nests. Consequently, the birds went to and from the nests for the entire time we were there.

A small flock of cormorants, accompanied by a few gulls, relaxed on the only rocks visible in the sandy cove. 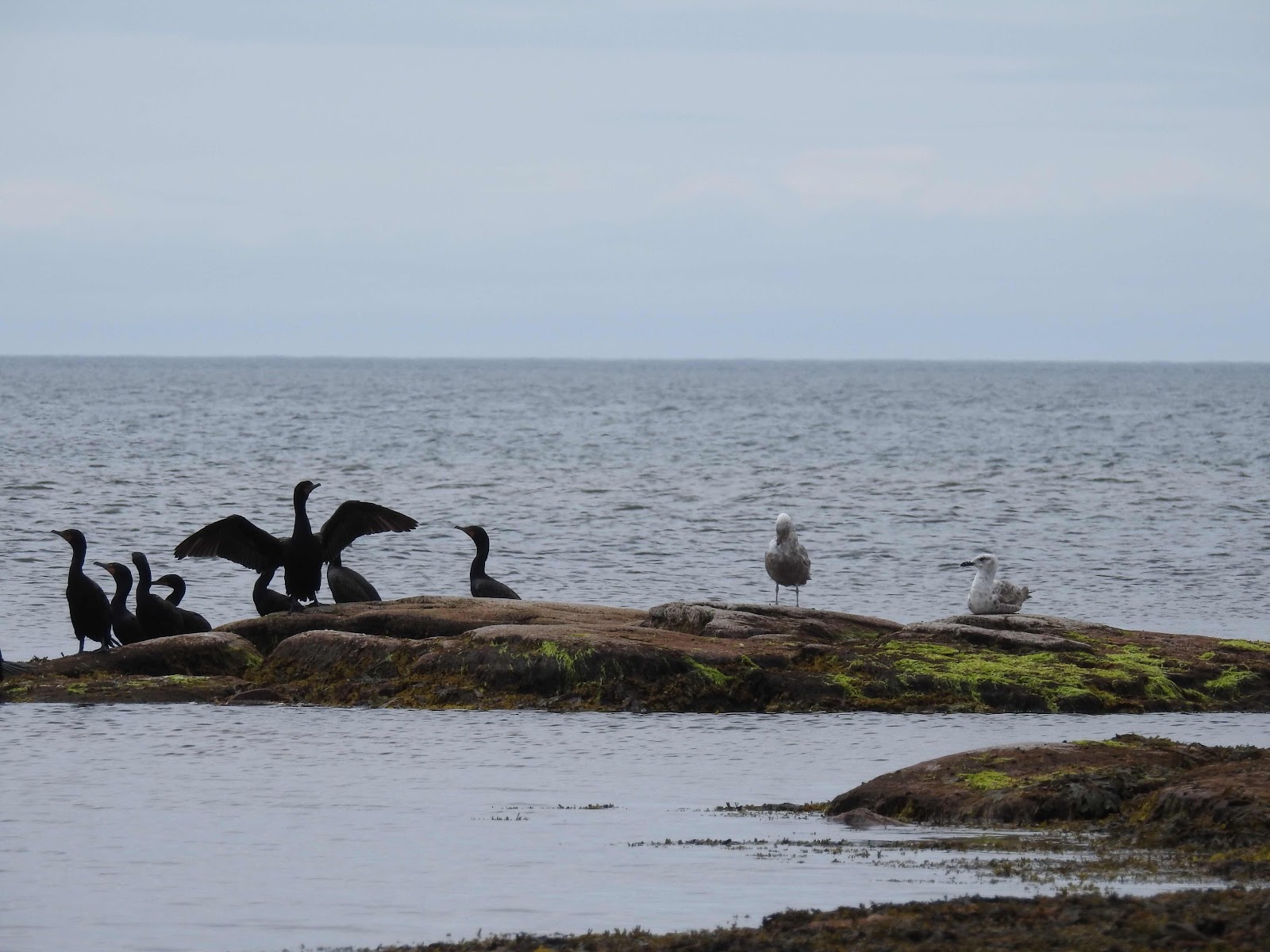 They periodically dived in the water, resurfacing far from their point of entry, eventually returning to the rock where they spread their wings to dry their feathers.

Our grandchildren enjoyed the day and we will return before long. Story time that night was about the animals along the beach. Now the oldest child reads to the other two and the middle child has begun to read to her younger brother as well. Sigh...time like the tide waits for no one. 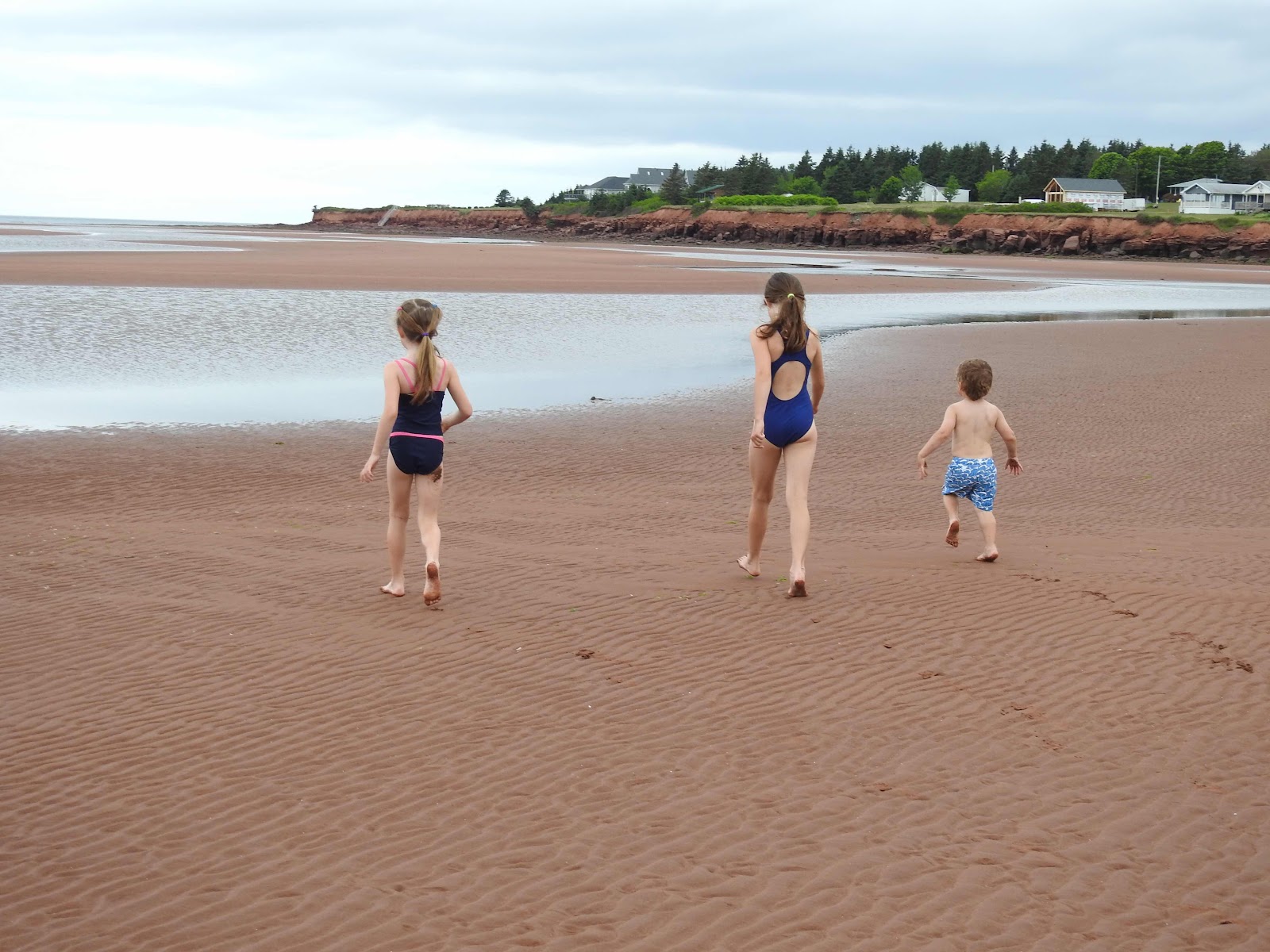 We will enjoy the cove while we can.

What a wonderful place to explore and learn about these animals. I love the pictures and the feeling of the cove. Thank you so much for sharing the moment. :-)

Beaches and rock pools are an endless source of fascination for children.

Oh such a glorious trip to beach dear Marie :)

i truly felt the delight and peace of being there
we have no beach near ,to reach one we have to travel to Karachi
but i can see how amazing it can be to spend sometime with family on summer beach indeed :)))
your capture are spectacular ,specially loved your grandchildren walking towards water ,the geese shot is so nicely taken too
how life is evident and vibrant after removal of white sheet of snow is magical experience

the youngest brother looks so interesting to play on the beach...

oh, there are "village" around the beach, I thought empty...

Have a wonderful day with grandkids

Children grow up so fast. I am glad you are all able to meet together like this, and beaches are fantastic places for teaching children a love for nature. It was my paternal grandmother who first taught me to observe the world around me :)

It is fun exploring the tidal pools. The starfish are a great sighting.
My son used to love finding the hermit crabs. I would be happy watching the Bank Swallows, Gulls and Cormorants. Sounds like you all had a wonderful visit to the beach! Enjoy your day, wishing you a happy weekend!

How lovely that they read to each other! But a story with Grandma will always be special too.

We find lots of razor shells so I suppose there must be clams under the sand but they've never been a traditional eating clam. We have cockles instead.

What a wonderful outing to enjoy with your grandkids.

That looks like a fun family day. It is so good to be able to make those memories .

That was a glorious excursion. For you, for the grandchildren, for us.
And a big hooray that the love of reading continues through the generations.

Such a wonderful place to take children. The starfish looks like a comic book drawing!

We have cormorants locally, great fisher birds, detested by human fishermen, the competition is too great. They're primitive birds, predating the development ifoof feathers which shed water. They have to dry off or they'd be waterlogged. It's amazing to see them survive and thrive.

I think it's wonderful the skill of reading is passed along. It is hard for parents and grandparents to learn they are important only to the first child, and that for as long as that child is an only child. When the oldest gets a sibling, it is the one the second looks to, not the parent, and so on down.

Ah, this is what memories are made of! The grandkids will always remember days like this.

Meant to say don't you sometimes wish you could hit the pause button, or push rewind? We want them to grow up and be happy, but oh, how fleeting time is.

Looks like a wonderful time was had by all Marie, such special times shared with your grandchildren, you are very lucky.. they certainly grow up fast though don't they 💜

I cannot begin to tell you the warm feelings I have when I see children exploring nature in this manner. It takes me right back to my own childhood where every day was spent poking around in ponds and streams, overturning rocks and logs, pressing wildflowers, looking for birds' nests, and so on. On the few occasions I get to the coast, I can still spend hours probing in tide pools. Thank you for exposing your grandchildren to the wonders so close at hand. I wish more grandparents would do this.

A good outing no doubt. So peaceful. No crowds. Just perfect.

the cove is really beautiful, your beaches so different than ours!! it's nice to see the little ones enjoying the beach, in our area, it is a way of life!! i have never seen a purple star fish...i have several i have found, dead, and brought them home. i have, of course, never taken a live one!!!

What a delightful family day for all of you. Making memories at its very best.
I love that there was discovery for the kiddos, especially the starfish.
Sue

Happiness is ............ A day at the beach with special Grandparents and the excitement of finding beach treasures, both animate and inamimate.
My husband and I were sitting in a park above a beach yesterday. Three delightful girls, of about your grandchildren's age, came racing up to their parents.
"We've found and oyster! Its got a real pearl in it!"
They kept repeating themselves with excitement. It took quite some time for their father to calm them down to explain that what they had was a pippy and that they must quickly return it to the sea.

Lovely stuff. I leave you with a smile on my face.

Nice! We are off the the beach next week - I hope - long walks and things to find!

It all looks like fun and the children are learning about nature at the same time. Keep well Diane