The way I see it

It was on the ground by the entrance to the bridge as we rounded the bend at seven a.m. Eating bird seed placed by walkers, a huge raccoon darted behind the bridge and peered out between the rails. 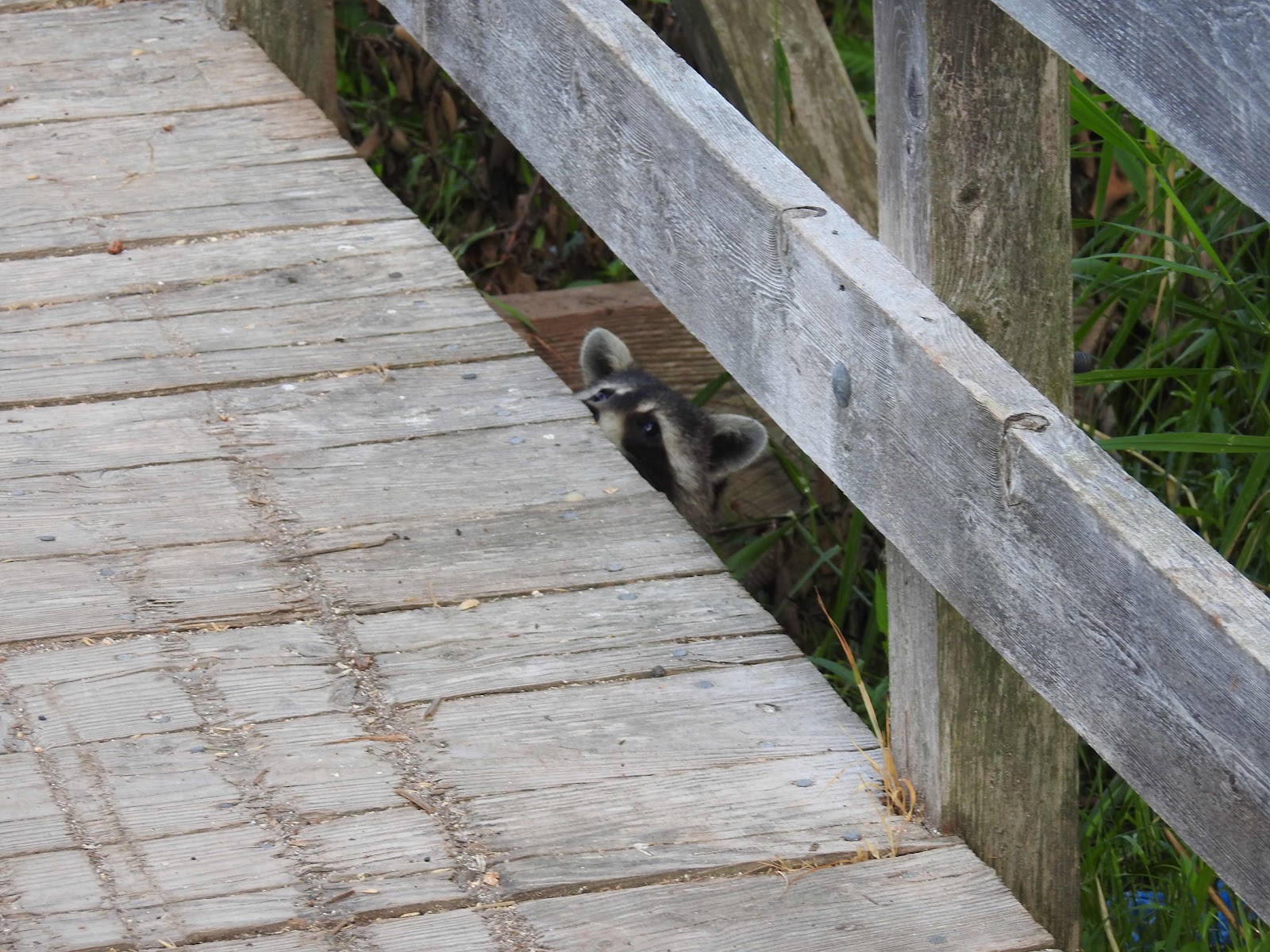 “Finally, a raccoon,” I said to my husband as I turned on the camera to take a photo.

We have lived on Prince Edward Island for ten years and had yet to see one. We’d heard about their antics but they hadn’t shown up in our neighbourhood to this point. Nor had we seen them on any of our excursions. Having come from Newfoundland which doesn’t have raccoons, the furry critters were a curiosity to my husband and I and we wanted to see one.

As we approached, the raccoon disappeared beneath the bridge. We paused to look over the stream from the centre of the bridge and the animal appeared again, climbing the railing to the top of the bridge to eat the birdseed left by walkers for the regulars. 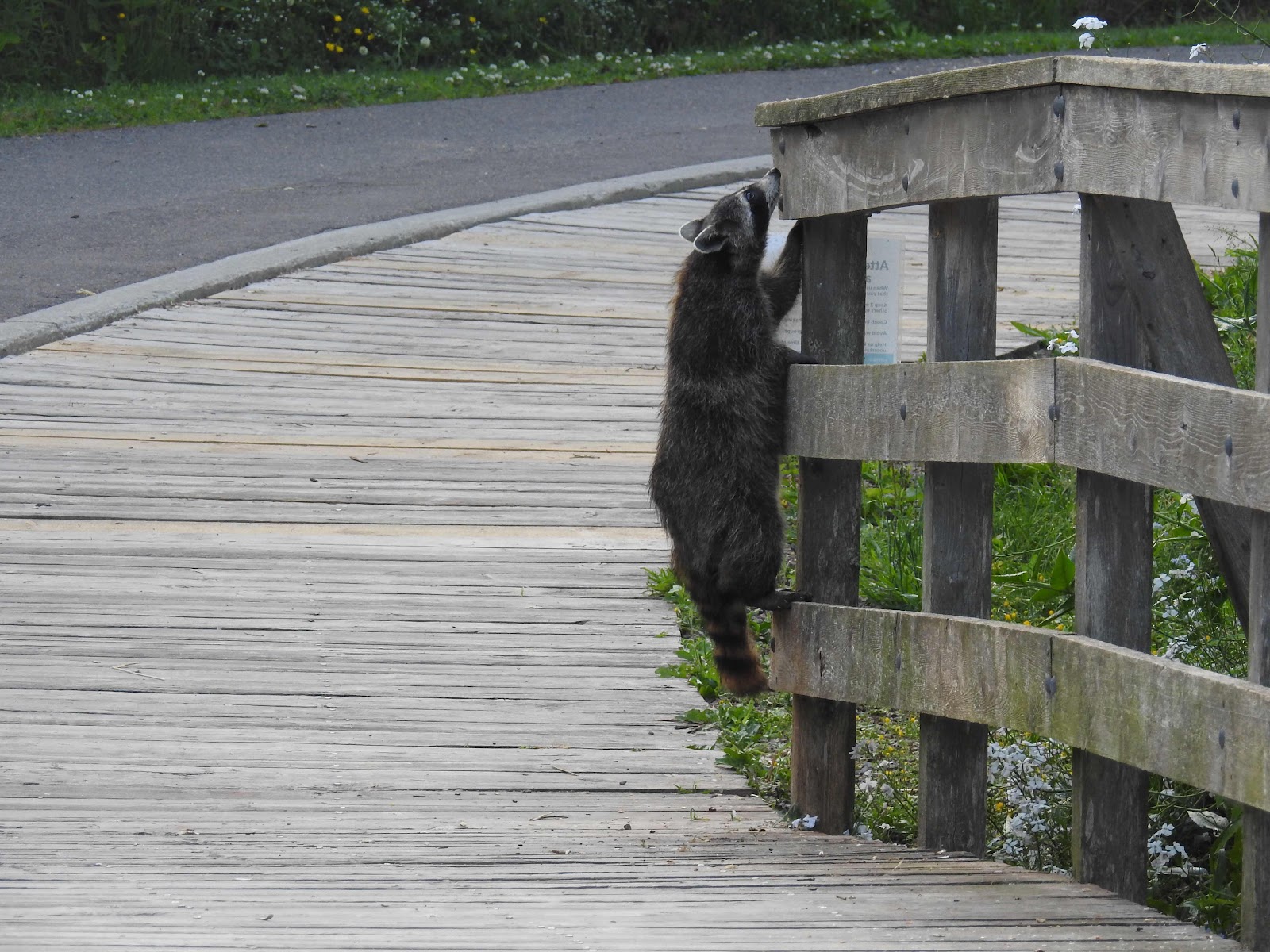 My husband and I watched for the longest time. It was the huge raccoon, with the distinctive eye mask and striped tale we had only ever seen in photos. It watched us but didn’t mind our presence and kept eating. 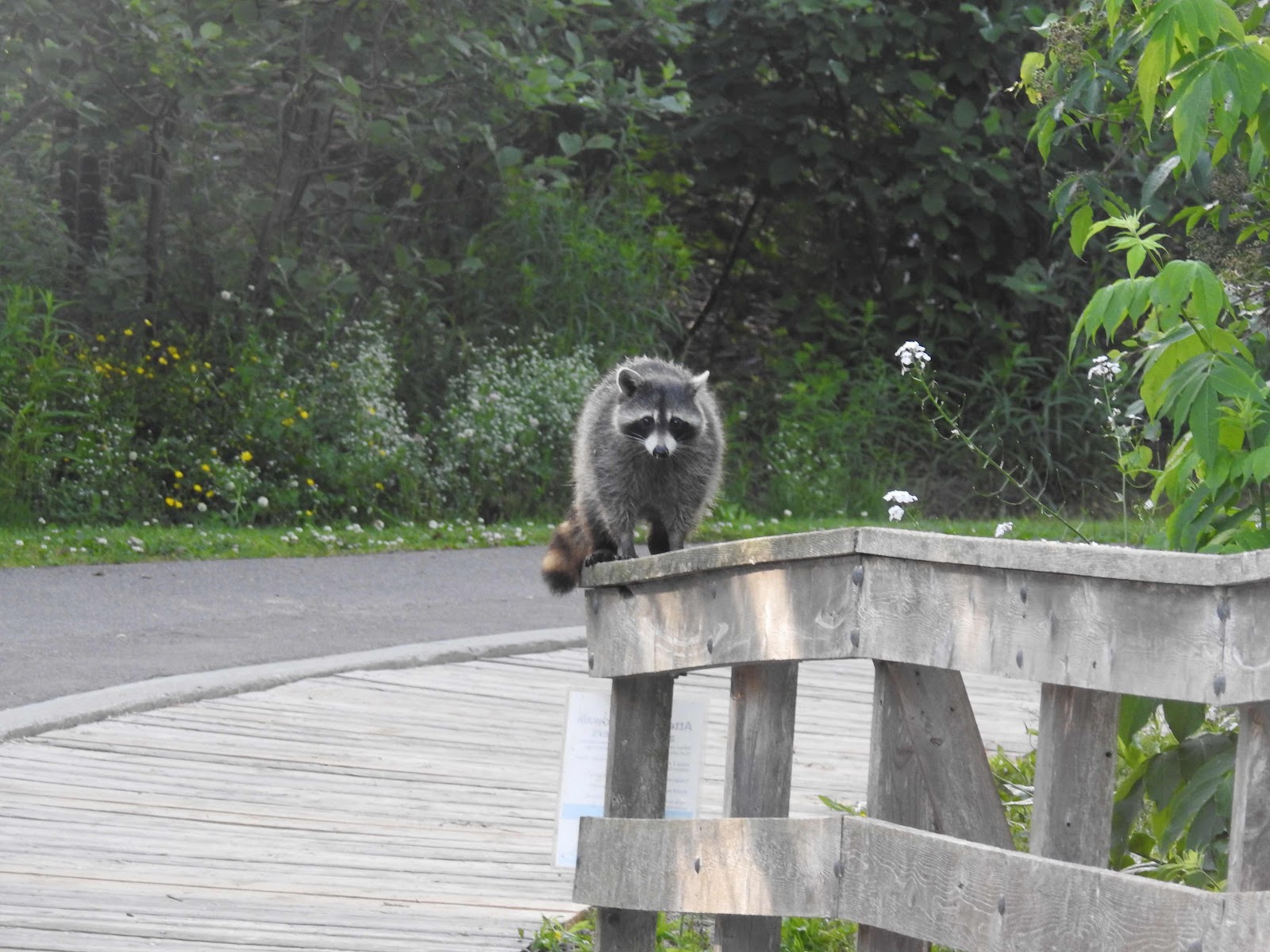 Several times other walkers approached and it disappeared behind the bridge again, only to appear as the walker proceeded past. We alerted anyone who happened by about the masked visitor. Many reported no interest in the raccoon because of negative encounters at home where bird feeders are raided and must be taken in each night. They complained about the mess the creatures make. We decided the best place for raccoons was along the boardwalk not in our neighbourhood. 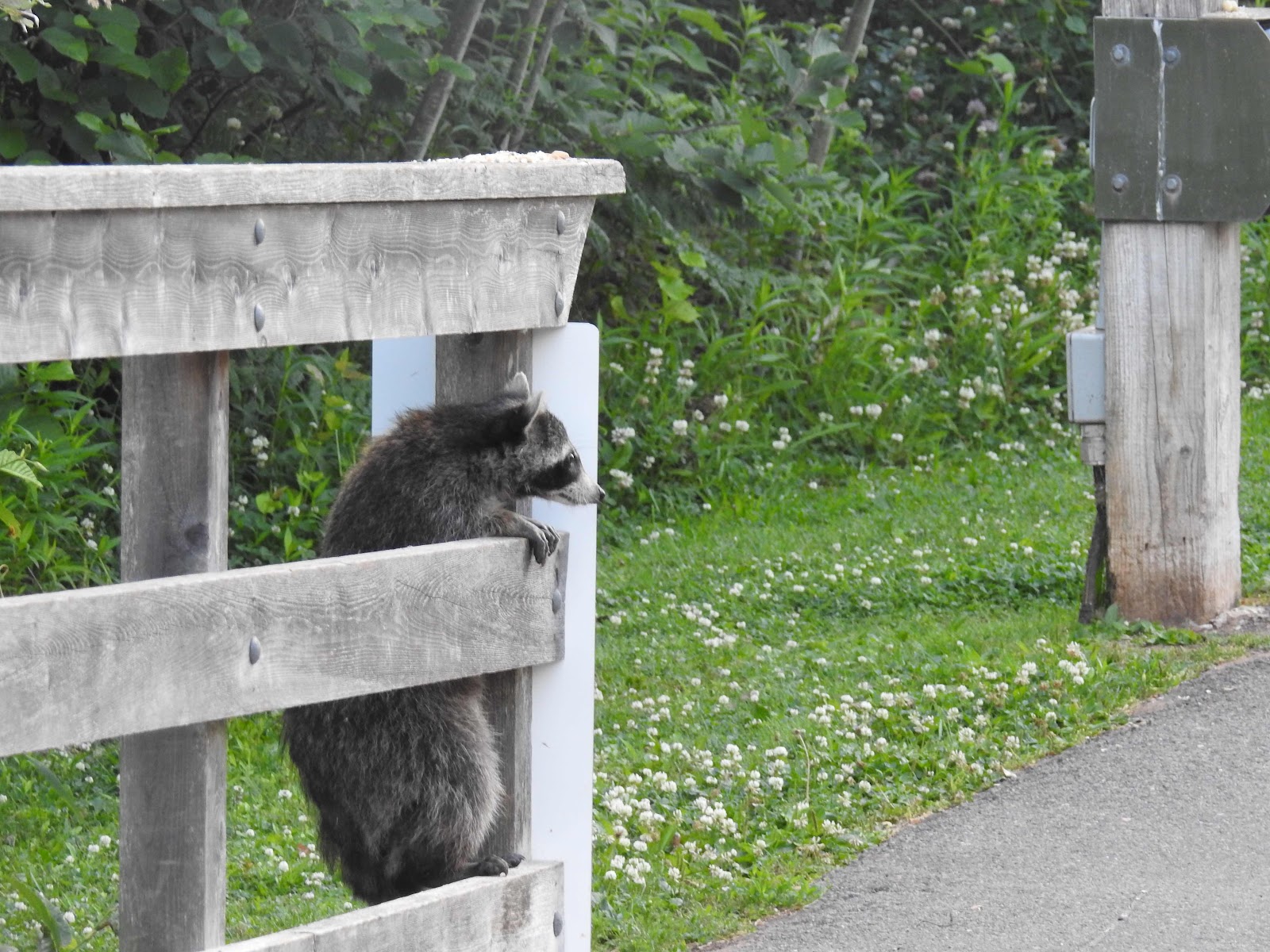 People can have such varied perceptions of the same thing which is certainly the case for many things in the world today. It is important to listen to each other and keep an open mind. Who knows, we may learn to appreciate the other’s viewpoint and expand our world view. The least we can do is treat each other with respect. 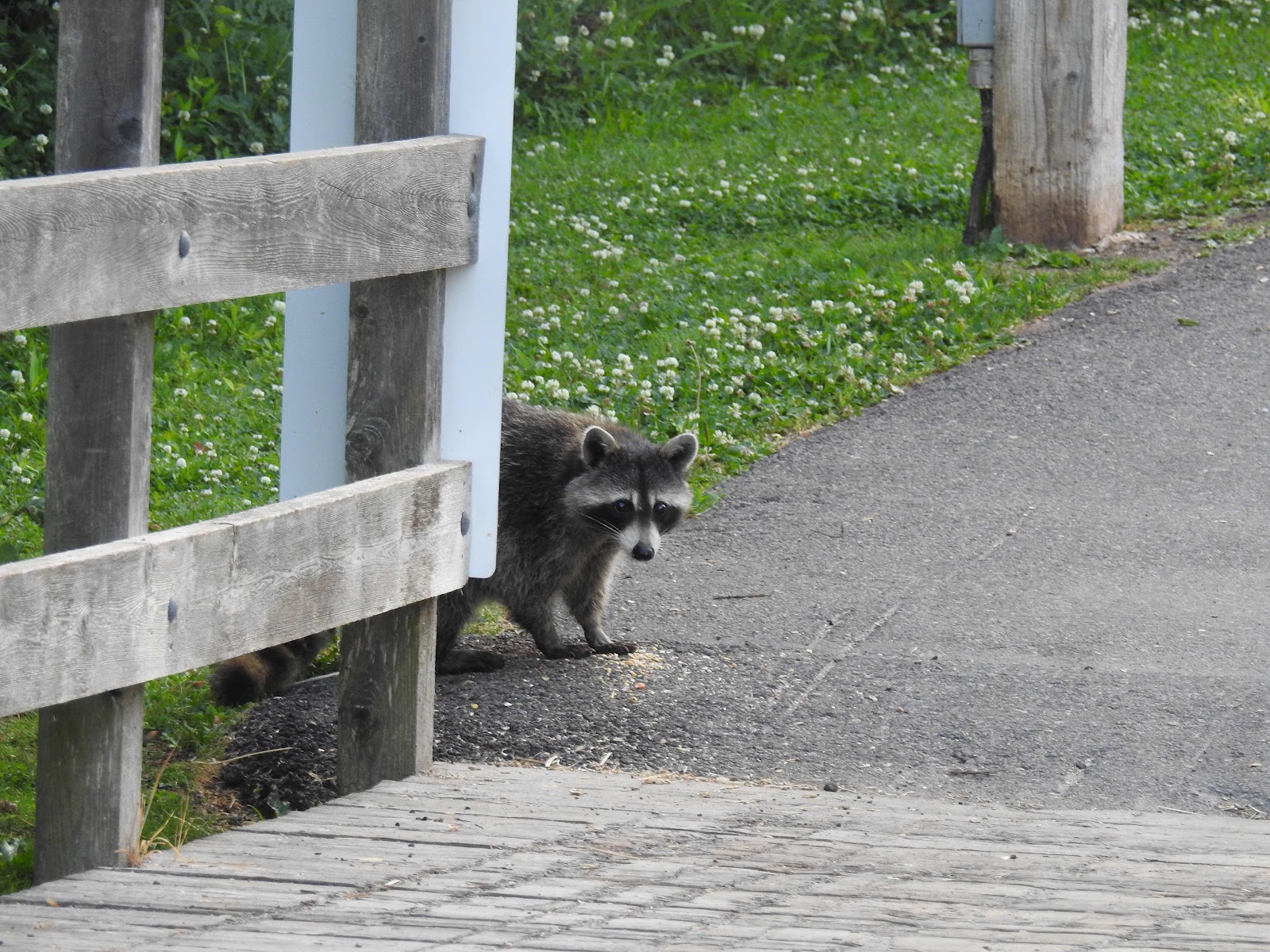 Meanwhile, maybe we can view that raccoon with the wonder of two seniors seeing one for the first time.

Email ThisBlogThis!Share to TwitterShare to FacebookShare to Pinterest
Labels: raccoon

I came close to hitting a pair in the care recently -- mother and offspring.

I am glad you were able to see this critter. They can be brave in the daylight. The raccoons are cute critters. But, they can be a nuisance. I have to put my feeders away each evening. They have broken a few and even stolen one. Enjoy your day, have a great new week!!

A friend of mine had her entire house trashed overnight by raccoons who came in the catdoor which they'd forgotten to latch. Unbelievable destruction. All the cabinets ransacked, flour tracked everywhere, syrup, sugar, coffee all over. They had to get disaster cleaners in! So she's not a fan. They're best away from homes. Intriguing animals, who need to fend for themselves in the wild. They're very resourceful.

That really is an enormous raccoon. I am not a fan, as I saw them once raid a duck enclosure and ate the duck right down to the bones. They will also eat small dogs. So I keep my distance.

The Way I See It And That First Photo, Brilliant - Also, So Dig The Starfish Shot In Your Previous Post - Happy Monday

Yes. Our raccoons are very destructive in the vegetable garden and digging up plants to find worms. I am not a fan. Plus we have had summer warnings about rabies. I think they are certainly smart and know who is going to hurt them and who will not.

They are indeed handsome animals, but real pests.

I've seen a few around here, big ones too! I keep my garbage and recycling safely in the garage until it's time to put it out.... never put it out the night before, that's just asking for trouble. They are very cute with those masked faces, but definitely a nuisance.

Oh it's sad to read in the comments above that the racoons are so destructive, they are so cute. Your first photo is brilliant Marie, the little masked face peering up at you 😊 I would have been excited also ✨

We don't have racoons in the UK so I can't really give any opinion except that they are handsome creatures. Some friends of mine had human intruders into their house recently, they made quite a mess and stole things too. My friends were understandably upset but, as far as I know, haven't developed a hatred of the whole human race as a result.

They are a beautiful animal. I would certainly be stopping and getting photos if I had that chance.

Perhaps if people fed them in the park/wilderness areas, they wouldn't encroach in neighborhoods?

What a wonderful experience to have seeing your first racoon. I never saw one in person but I do think they are cute with their masks on. The first photo is my favorite. Too bad lots of people have a bad experience with them. Not me. :)

What a joy to finally see such a beautiful creature, although reading the comments above, it sounds like some find them a real nuisance-pest.
I like your idea about having an open mind about things. The world would be a much better place if we all had more respect and tolerance for each other.
Enjoy your day :)

LOVE the first photo. I would have joined you in your awe and wonder.
And a big yes to respect. And kindness. Which we all need.

i am afraid I am one that would probably enjoy one here at home, as long as he found no way into attic. Which I wouldn't think he could. It is the same with squirrels...some people hate, but I always throw extra food on the ground for them. They are fun to watch.

I have not seen raccoons in the wild. They have been seen here but are not common.

Ah, glad you finally got see one! They are charming, wily creatures with great hand dexterity. And adorable young. Having a personal history with them in close proximity, I am wary of them. Smart and adaptive. And, as people have commented above, capable of wreaking havoc. Hm. The positives and negatives I've listed sound a bit like people.

Debra above says that they are handsome animals, but real pests. The description fits humans perfectly. Would I prefer the humans who set off their noisy fireworks until two in the morning, the used cases of some of which wind up in my yard, or would I prefer a visit from a raccoon? Recently new people bought the house behind us, thank goodness, replacing neighbours who had the noisiest pool parties you could imagine. The raccoons that visit from time to time don't fill the air with excessive, vulgar hilarity, and they have never thrown a beer can over the fence. The worst they do is knock down my bird feeder if I don't bring it in, and who can blame them for that? On balance, I'll take a raccoon any day.

aww ...raccoon... they come to my backyard sometimes....
thank you for sharing your thought about "open mind"...beautiful mind.

I'm familiar with a mother and yearling pair. They keep their distance from you, but I find them good company. I'll say hello to them, and they'll look at me as if I'm nuts.

This one is a photogenic one.

Hi, Marie! As you know from reading my blog that I love the wildlife that comes to our yard in Maine. I put out extra black oil sunflower seeds and cracked corn on the ground and then photograph them from the kitchen window. My aged mother loves watching the activity and the raccoons and red squirrels leave the feeders alone. Believe it or not, aside from 3 raccoons we also have 4 ducks, a turkey, a fox, and occasionally a coyote visit-but not all at the same time!😏

i don't mind the raccoons terribly, we have them in our yard and they kind of go unnoticed. i would worry if i saw them durning the day, they are said to be rabid if they are out during the daytime, but who knows!!

your pictures are great, showing off the traits they are famous for!!

Raccoons can do a lot of damage. They know how to get into attics. I know! Not interested in having them around... at all.

This raccoon has different coloring than the racoons around Florida. They can be very meddlesome and get into garbage and do damage. I'm glad you got to see him and he was so cooperative for the photos!

You got so close! Are they not afraid of humans?

I know they are considered pests, but this one looks so cute. Great photos, I love the first one.

Fantastic! I don't know much about raccoons but it must have been wonderful to be able to watch one.

If Alberta has raccoons, I have not seen one in my whole life here.

i have never seen this one ,when we visit Islamabad parks we see mostly chimpanzees or monkeys ,once i saw bunch of pigs running ,it was scary lol
thank you for AMAZINGLY taken images ,i enjoyed sooo much :)