The golden grand-dog and I headed to the boardwalk early. Georgie doesn’t make it easy to handle her and the camera but I brought the camera anyway. It was another cool morning with a breeze which precluded wearing shorts and short sleeves.

The gazebo was wind swept and as I turned on the camera, a seagull glided past. Then another one or so I thought. 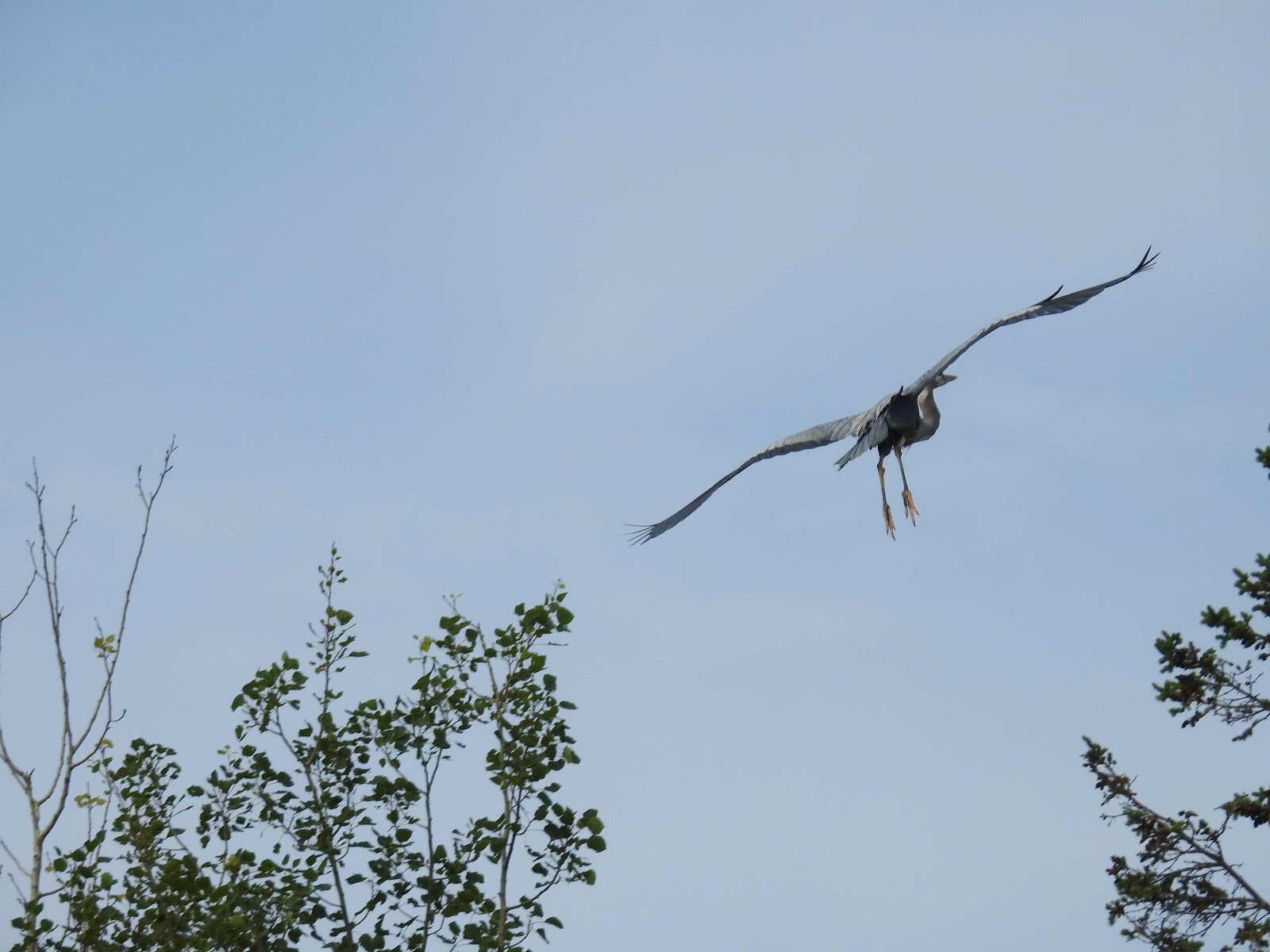 On closer look it was a Great Blue Heron. I glanced at Georgie who was focused on a squirrel and as I looked across the water, there was the heron on the tallest tree. 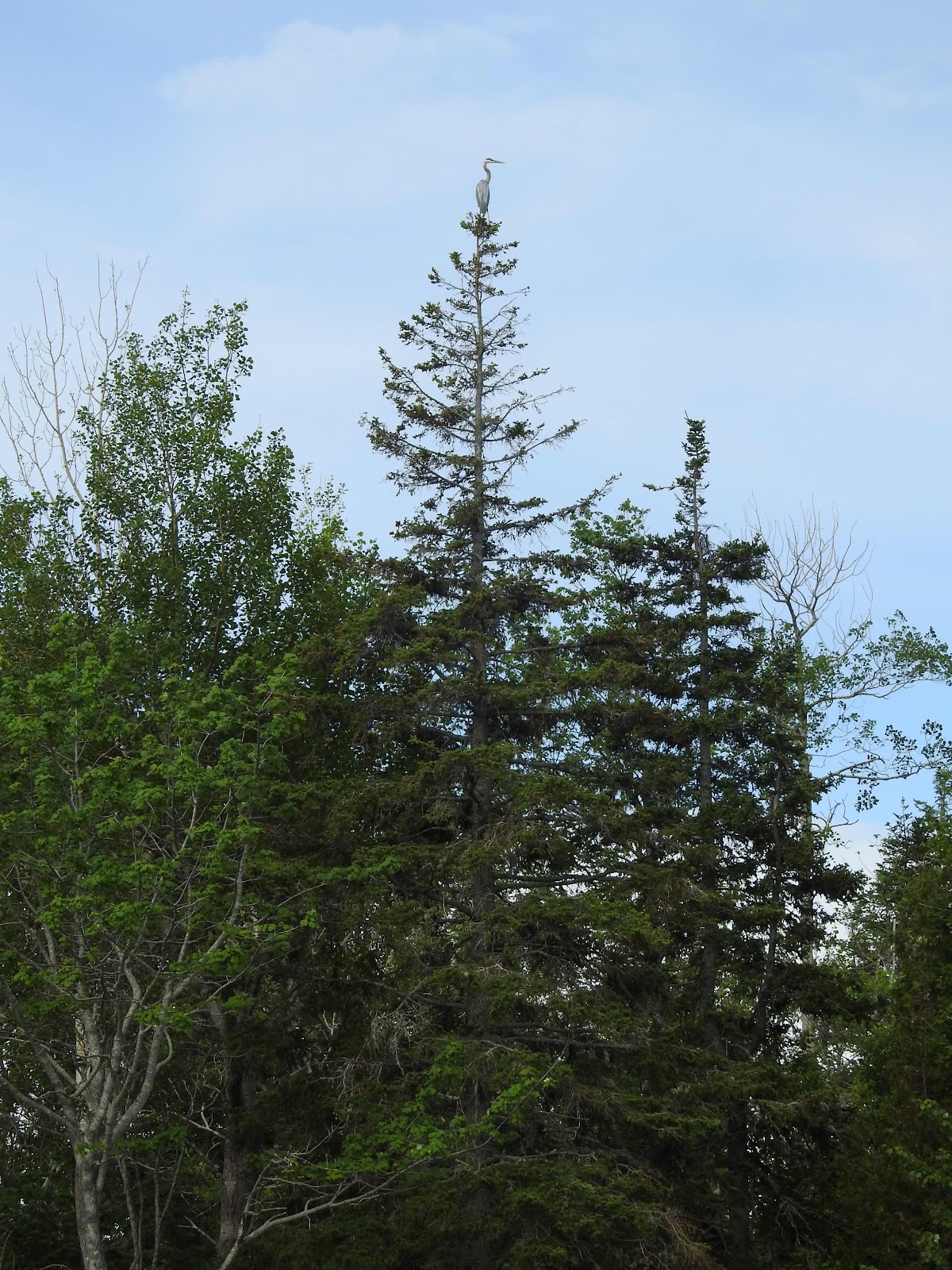 It was easy to miss too. As a tree topper in the huge tree, the large bird looked small. However this was no mere tree topper. 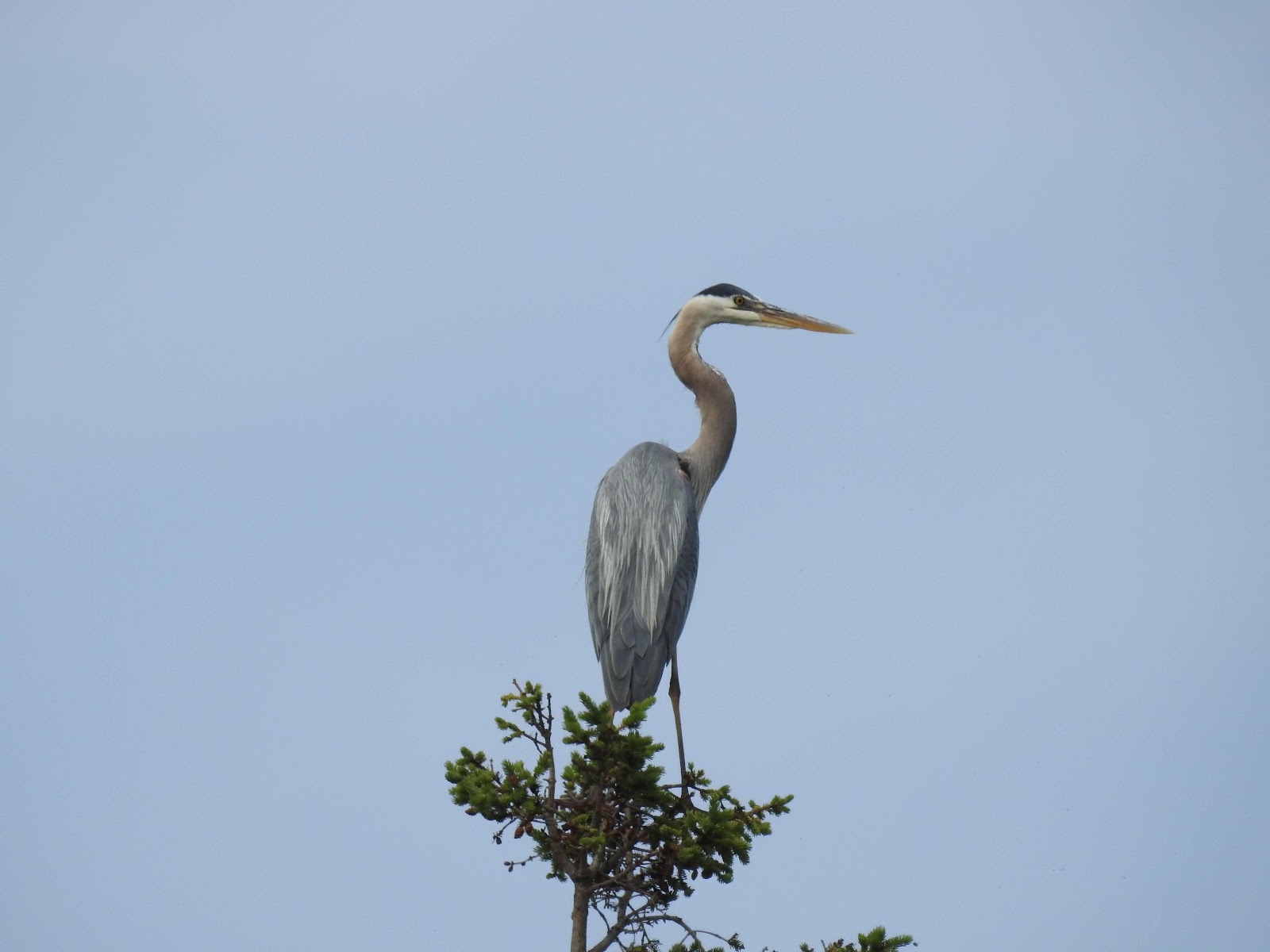 It moved around as sure footed as it is on land. It appears that when you can fly, fear of falling doesn’t exist. 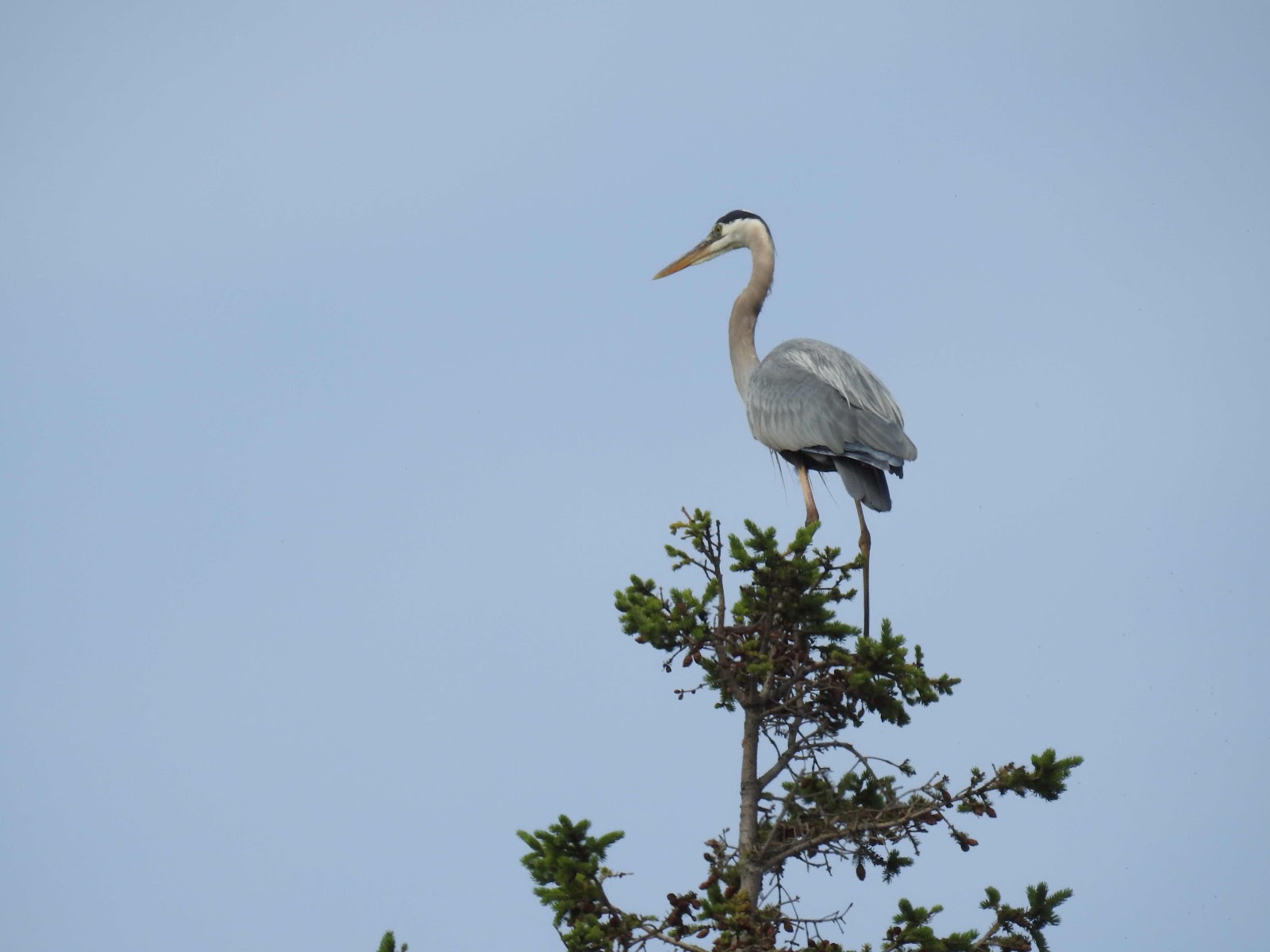 You would think the large bird would be clumsy in the tree but it wasn’t. It scanned its kingdom, shifting position to take in its entire domain. 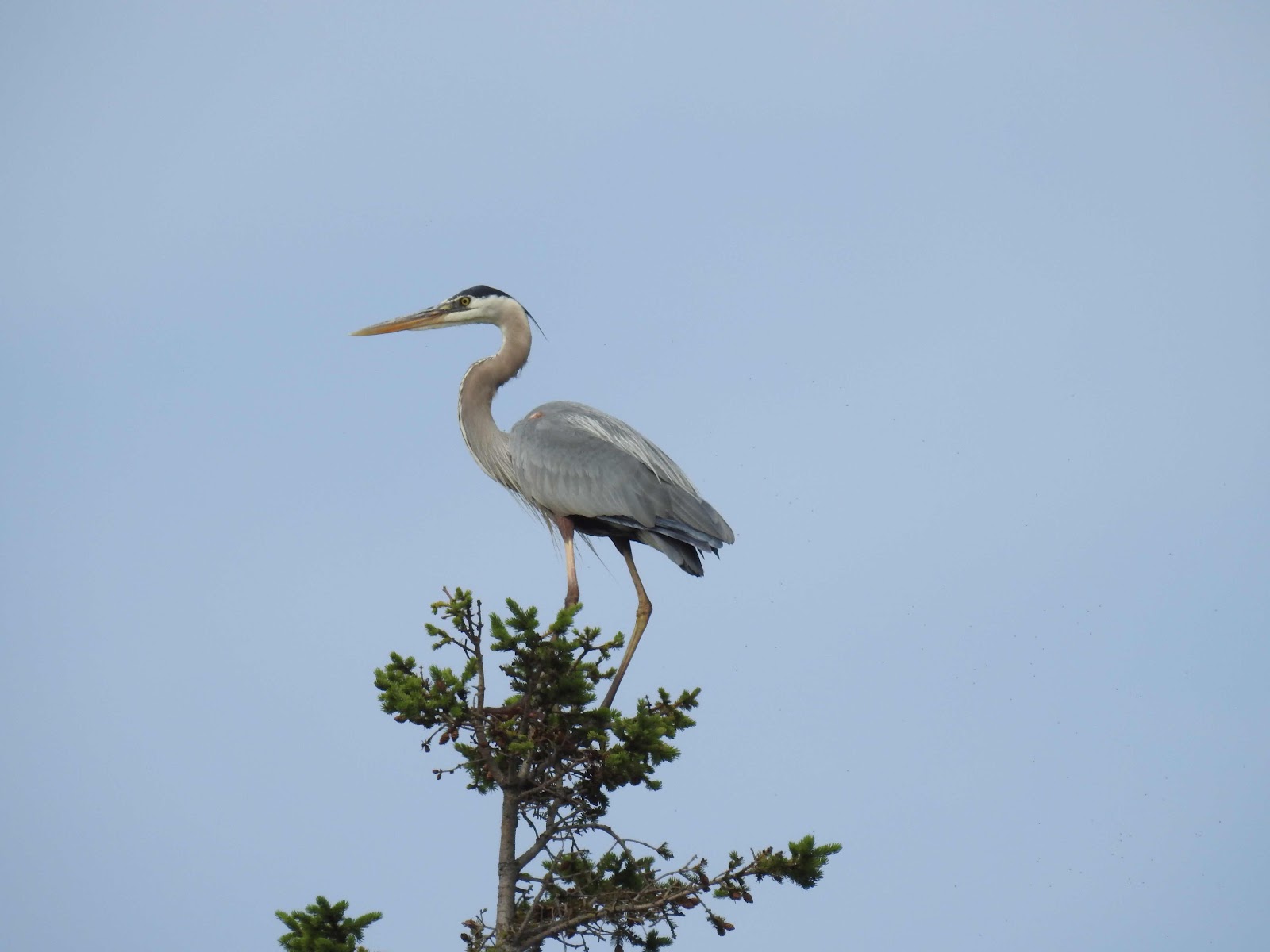 The bird must be lighter than it looks since the small branches at the top of the tree supported it. 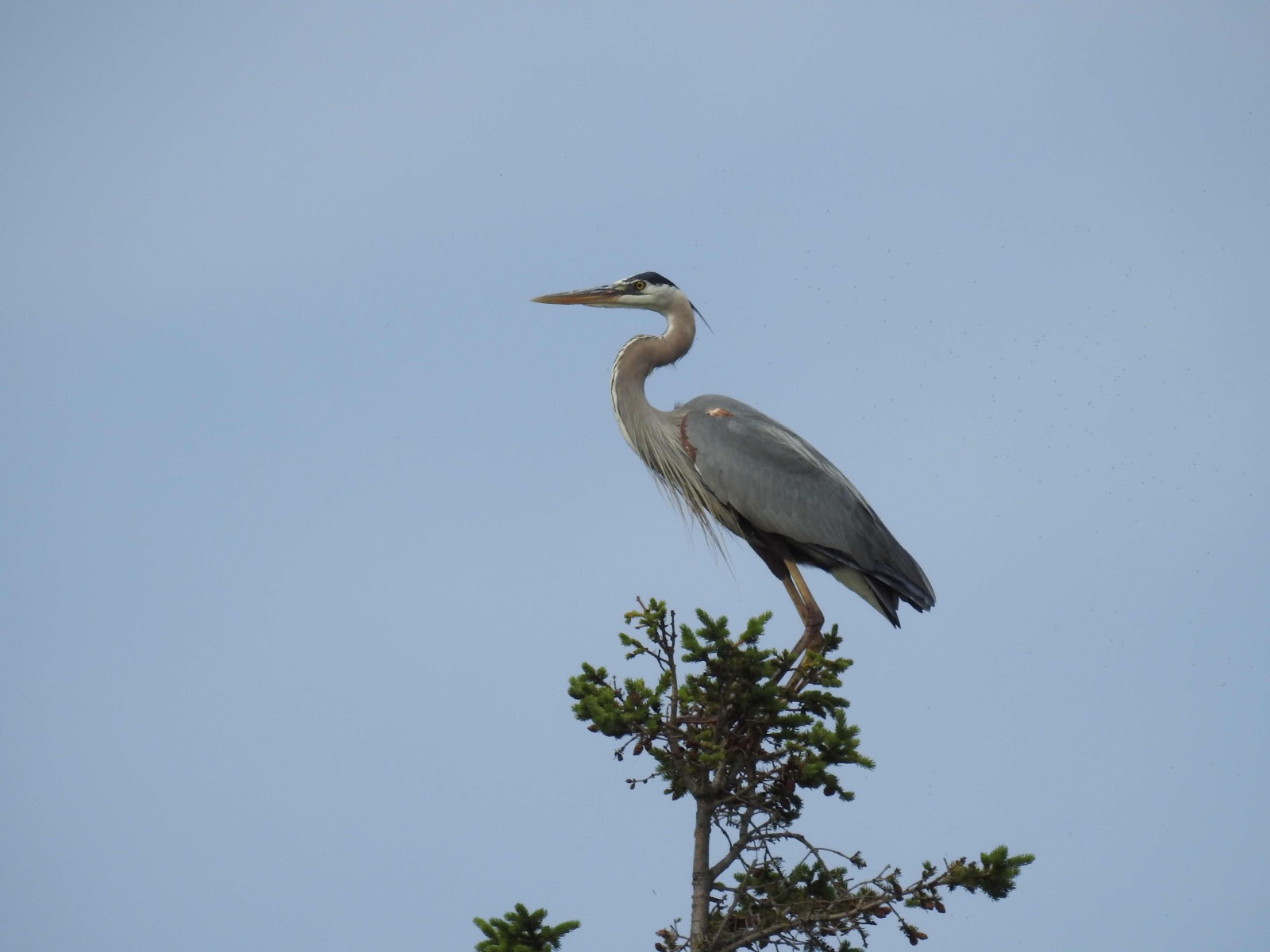 Georgie was pulling me towards the squirrel so I looked at her and adjusted the lead. When I turned back, the bird had flown from the tree top and was headed out over the harbour. The Great had lived up to its name. 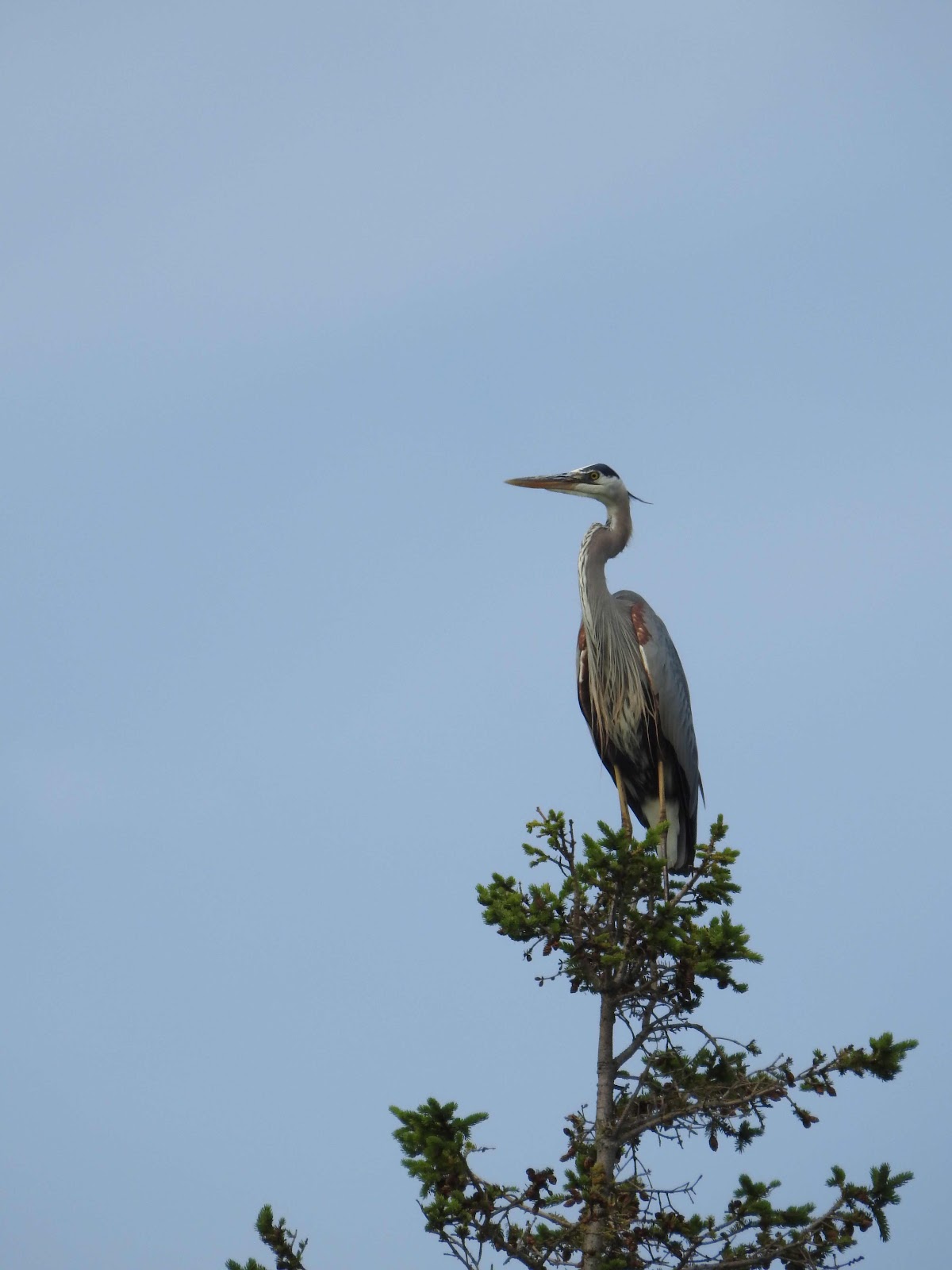 I can understand it is difficult to take a shoot while walking the dog but you did it great!

I have not heard of the Blue Heron but we have alot, I mean alot, of that Grey Heron everywhere--They are very shy!

Did you know the longer the ponytail a heron have ,the older he she is

Wish you a nice week coming in

What a wonderful series of pictures of the beautiful creature! Thank you so much for sharing these. :-)

What a magnificent series of captures Marie. The heron picked the supreme lookout position. It really is amazing how comfortable it looks up there 💙💜

What an ultra cool shot!

What a great sighting and series.

We have these birds locally, wonderful sight to see them effortlessly gliding over the rooftops flying from marsh to lake. Your observations and pix are great.

Oh, Marie, I am so jealous and I love that you took so many pictures to share. What a regal appearing bird. Just lovely.

I love your tree topper photos, great capture of the GB heron.
I remembering standing on my dog's leash so I could take photos. My Goldie Girl never tried pulling away, thankfully. Take care, enjoy your day! Have a great new week!

What an AMAZING and spectacular series. Many, many thanks.

Phenomenal pictures, Marie. It is extraordinary that such a large bird can stand on top of a tree like that (it reminded me a bit of a star on a Xmas tree!).

Wow, you got some beautiful photos of the beautiful bird. Well done, Marie.

Marie!!! These are magnificent pictures!!!!

Oh my word! That was an amazing opportunity .Fantastic shots.

What a great, award worthy series of pictures of my favorite bird.

I'm always amazed at how such a large awkward bird can be in a tree.

These are terrific shots. It always amazes me to see them perching in a tree. They just look so, so long legged and ungangly.

Some great shots of the Great Blue Heron who really cooperated for you.

yes, I guess the bird lighter than we thought....
you are so patient to get excellent shots.... great job.

Well, isn't she a beauty? Well worth the effort.

WoW!!! what awesome captures!! i LOVE the big birds and it is amazing how they could possibly stand on the top of the tree. i have seen the egrets do it also!!

What excellent pictures! And your descriptions added the finishing touch. Thanks for sharing these!

Fabulous photos of this heron at the top of the tree, Marie, which, to be honest, I have never seen with my own eyes, even though we see herons around here all the time. WOW. Lucky you.

But I did have to smile about "Georgie doesn’t make it easy to handle her and the camera."

Amazing captures you got on this post. That heron looks so cool on the very top of the tree. Love it!