Our three grandchildren spent two days with us recently and it was both fun and exhausting. The kids were excited and my husband and I were rested in anticipation of the increased energy level required.

We packed a great deal into the two days including time at the playground and splash pad, board games, time in the garden planting and picking produce, walking the dog, art, baking, movie night with popcorn done Nan’s way, a trip to the dairy bar for dessert and walking on the boardwalk. Mealtime sat around talking was always fun. Between mealtime and snacks, these kids are always eating. They love fruit and vegetables though.

The oldest of the three is wide awake, voice engaged, when her feet touch the floor. The other two are slow to start. The middle child, hardly speaks for the first hour, while the youngest is slow to begin but winds up quickly. The three couldn’t be more different.

One of the highlights of the two days was their time on the boardwalk, feeding the animals. The three were excited to feed the birds and squirrels especially. We put peanuts in the birdhouse on the bridge and the parade of blue jays made quick work of them as they flew off with the shells. 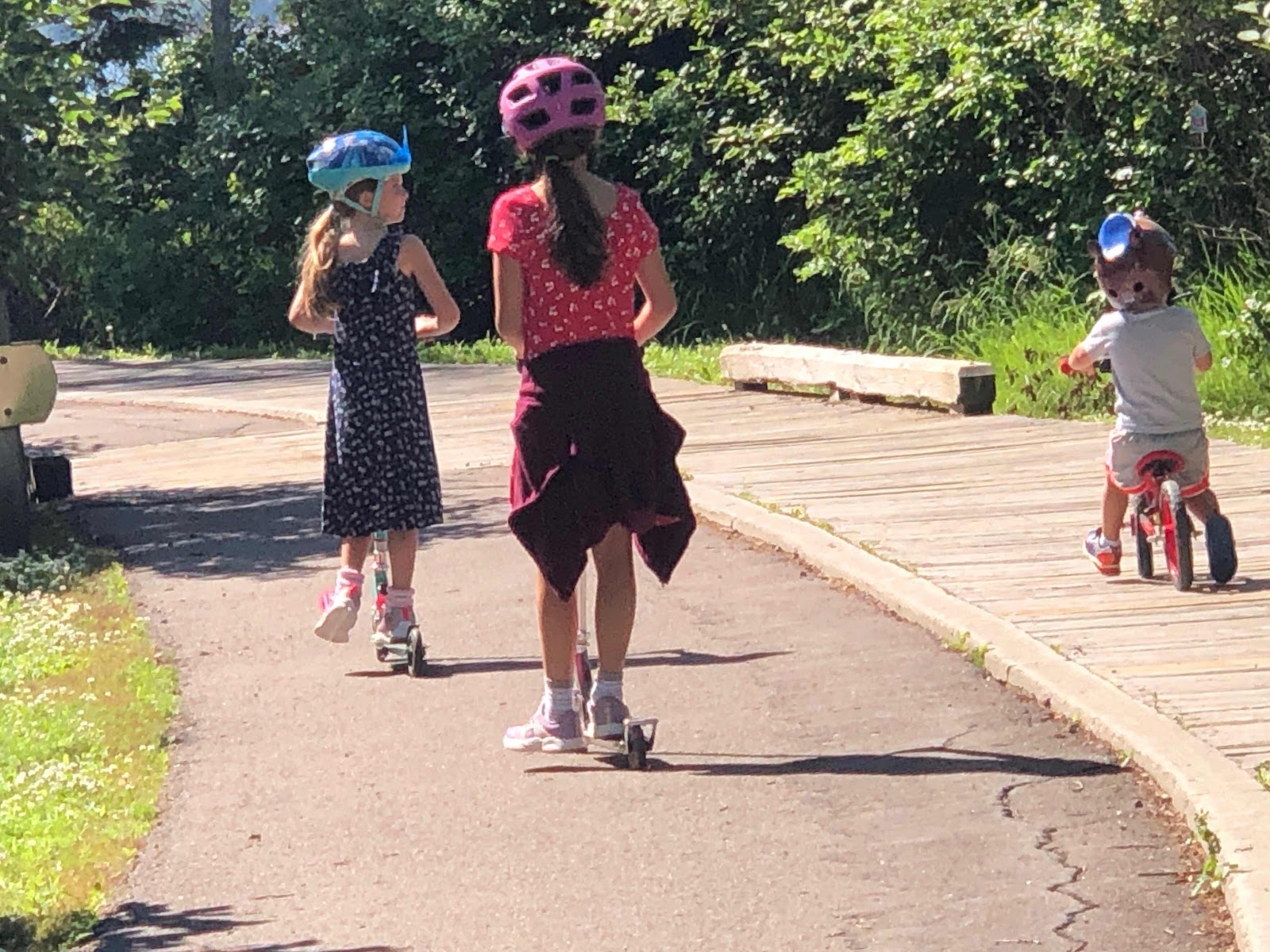 The kids were excited to sit on a bench where we had watched a grandfather and a young grandchild sit and feed the squirrels previously. There weren’t any animals there when we arrived but we tapped on the bench with peanuts and the squirrels soon appeared. 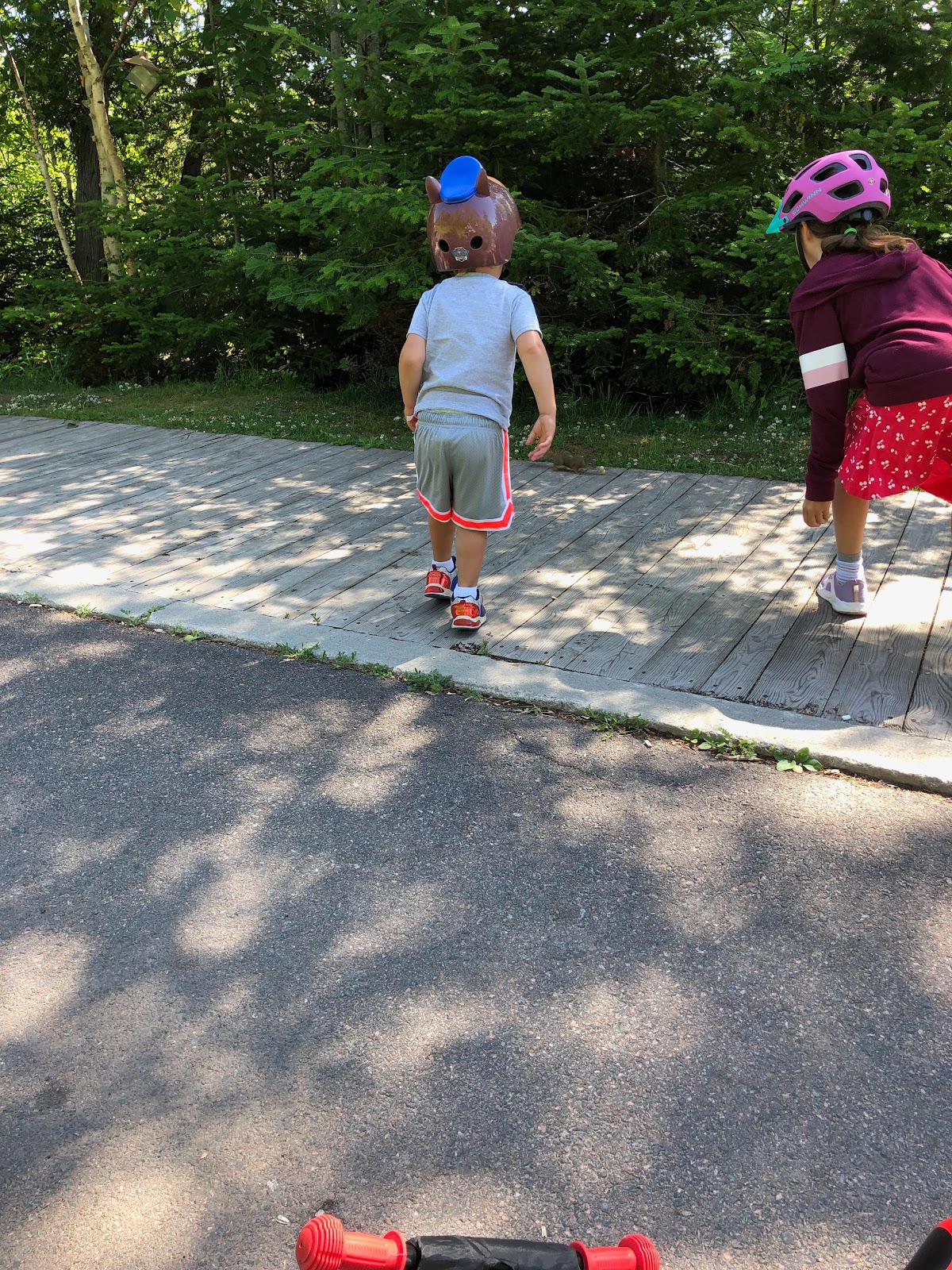 The three enjoyed passing the peanuts to the furry fast rodents. They soon learned that the squirrels wouldn’t take any peanut shells which were cracked open. After a few minutes, we had distributed a large bag of peanuts to numerous squirrels. 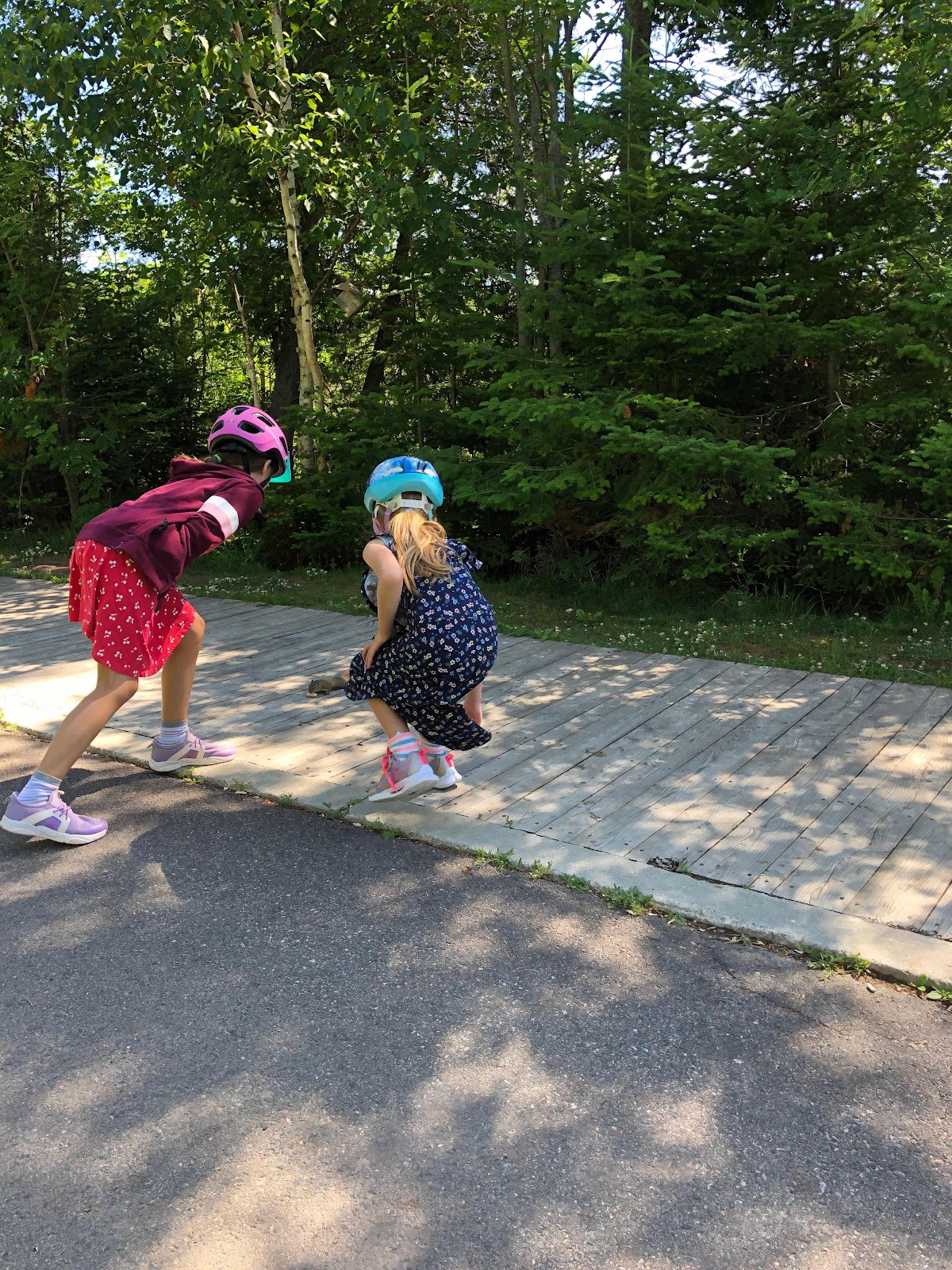 With the girls on their scooters, and the youngest on his balance bike, we continued to the end of the trail. Along the way we spotted four Cedar Waxwings among the dead trees by the harbour. I’ve only ever seen one before along the boardwalk so this was quite a sighting. 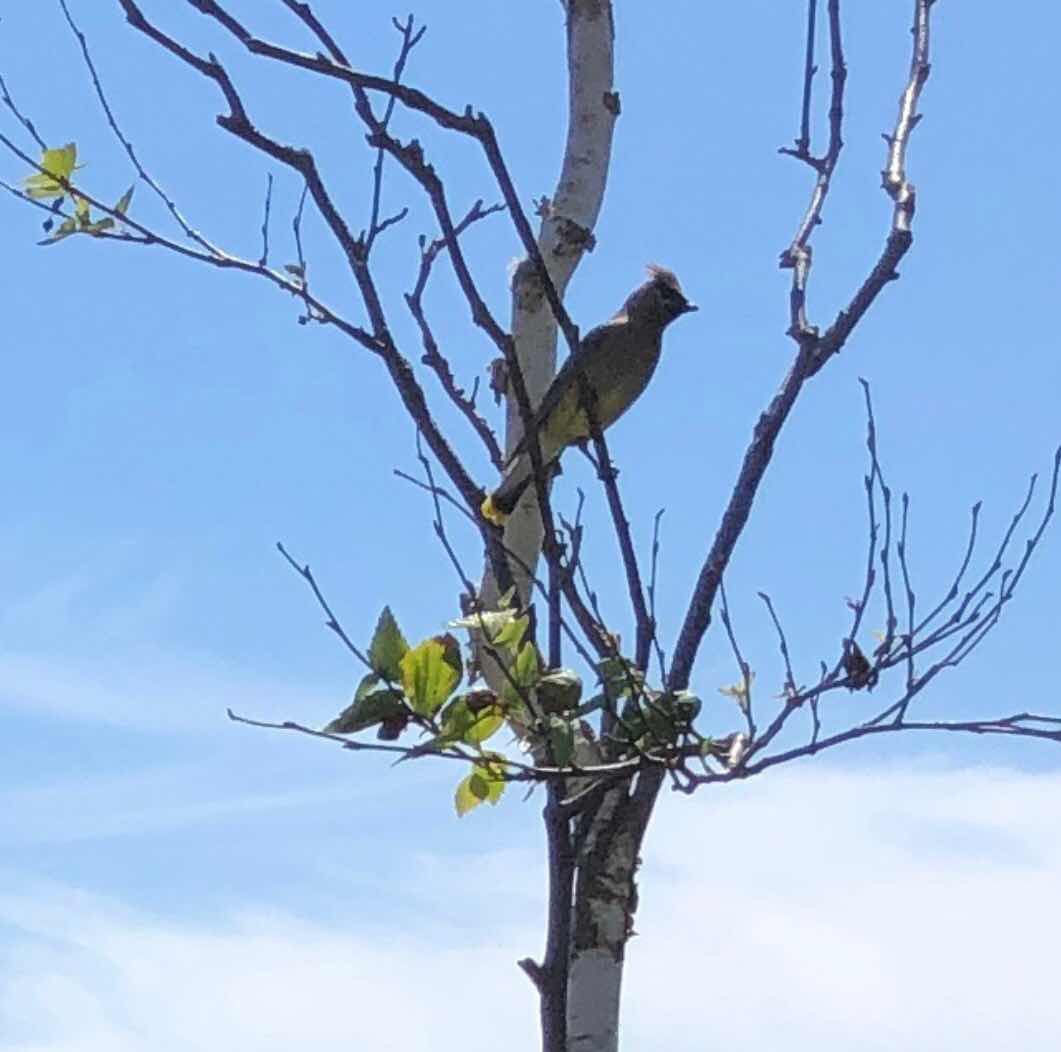 My husband and I thoroughly enjoyed the two days with the grandkids. We were both exhausted however, and napped when they left. The house was suddenly quiet but their voices will fill the quiet again soon. Yay!

Sounds like a fun time with your grandchildren.. It is great to have so many activities for them to enjoy. They look cute feeding the birds and squirrels. The Cedar Waxwings are a treat to see, they are so pretty. Enjoy your day, have a happy weekend!

Oh I know exactly how you feel Marie. When my grandchildren come from Sydney to stay for a few weeks at Christmas it is an absolute delight but so so exhausting. I'm really hoping that the borders between WA and the rest of Australia are open before Christmas ✨

Yay for the good times, but what fussy squirrels!

Glad you had a fun time!

They are really sweet, and I envy you your time with them. Without any grandchildren of my own, I "borrow" those of my blog friends. Thanks for the update and pictures. :-)

You've reminded me of a bumper sticker I saw years ago, Marie: "If I had known being a grandparent would be so fun, I would have done it first." However, there IS a reason why we're grandparents second, exactly because of what you have said about being so exhausted afterwards. Can you imagine what it's like for all those grandparents out there who are taking care of their grandkids as though they were their own??? (sigh)

What a lovely place to share with the grandkids. You'll probably sleep well at night after all the fun and shepherding them about.

That would leave you knackered!

ooooh i understand, COMPLETELY!! my great nieces are exhausting and their personalities are complete opposites, it is so funny!! i am sure you enjoyed the time with them but napping afterward is a must!!

and the little ones stole the show completely. nice to see the waxwings!!!

So much fun, even if it is exhausting! You are creating wonderful precious memories with your grandchildren that they will remember as adults - I cannot think of a better legacy than what you are creating with them now :)

I'm so glad you had such a wonderful time with the Grands.
There is nothing like those memory making days.
Our Grands are all young adults now so life is very different when we get together but I do completely understand about being exhausted..in a good way...after they leave.
Its actually the same way when we had our "company" on Tuesday..after things got cleaned up and put away, Dave and I totally collapsed. (:0)
Sue

The activity rate reached high levels for you but you managed it well and had lots of fun. :) What's up with the squirrels not liking opened cracked peanut shells.

Children playing are a delight for parents.

Sounds like special time and special memories were created.

What a wonderful time - for you all.
I wonder whether the current morning tendencies will stay with your grands as they grow up. I was apparently awake from the first moment my eyes opened as a child and am still a morning person.
My partner falls into the 'spring out of bed at the crack of noon' category. And his spring is slow.

Special days for you and memories that will be treasured by them in the future. I love the natural action shots as they feed the squirrels.

Such fun activities! We haven't seen our Grands close up for many months. We miss them! Looks like you tired yours out! (and visa versa...)

Those little ones are keepers! I'm sure their parents think so, too.

Yes, these little guys are lots of fun but very exhausting. they never stop.

kids always love to play outside and eager to know many things....
glad you and your husband have "full" energy to play with them.

Have a wonderful time with grandkids....

I can imagine how wonderfully exhausting it is to entertain three children for two days! You certainly packed lots of wonderful adventures into your time together... what fun they had feeding the squirrels! It is amazing how different each child is from each other! Glad that you are able to have their voices in your home quite often, what a blessing!

Reading this makes me quite content that even our youngest have passed the age when they spend a weekend with the grandparents!

What great memories they will have of their time with Nan! But is is exhausting. Do you wonder how you coped when you had children? I suppose we were younger then and had more energy.

Sounds like lots of fun. Having no children and obviously no grandchildren this is something I will never experience. Have a good weekend. Diane

Thank you for doing this. Those kids will never forget this time spent with you.

Oh how sweet that you got to have the grand kids over! Indeed it is exhausting! How fun to things with them and watch how they play and interact.
Glad you had this time with them. Beautiful bird. You do have an incredible knowledge about birds as well. I love the birds but only the names of a few of them.

Wonderful memories being made. Isn't it awful how quiet the house becomes once they leave, or in our case Lorelei.

I can only laugh at the thought of all the talking going on. Seems like someone is always talking when the Grand Girls come over. I'll be glad when the COVID and the Heat Wave are over so we can enjoy some outdoor time together.

So nice photoes of your family!some great days!

Sounds like fun for all! Amazing how different siblings can be. I have 2 sisters and it is certainly true for the 3 of us.

Your grandchildren will remember those squirrels forever! And to be more serious, they will never forget the time they are now spending with you and your husband. Having an extra set (or more) of loving adults in a child's life is a bonus in every way.

days with grand kids must be treasure for you dear Marie :)

thank you for delightful glimpse ,i really enjoyed how your grand kids had fun while feeding squirrels :)

difference between energy levels is obvious though spending time with them brings memories of days back when we were as energetic and curious :)

Are grandchildren wonderful?? I love my dear little granddaughter to bits!!

Time spent with grandchildren is a blessing.
My almost 2 and half year old is so far from me.
Have I told you I have now a grandson? Yes, he was born last Sunday. And he lives in Toronto!!